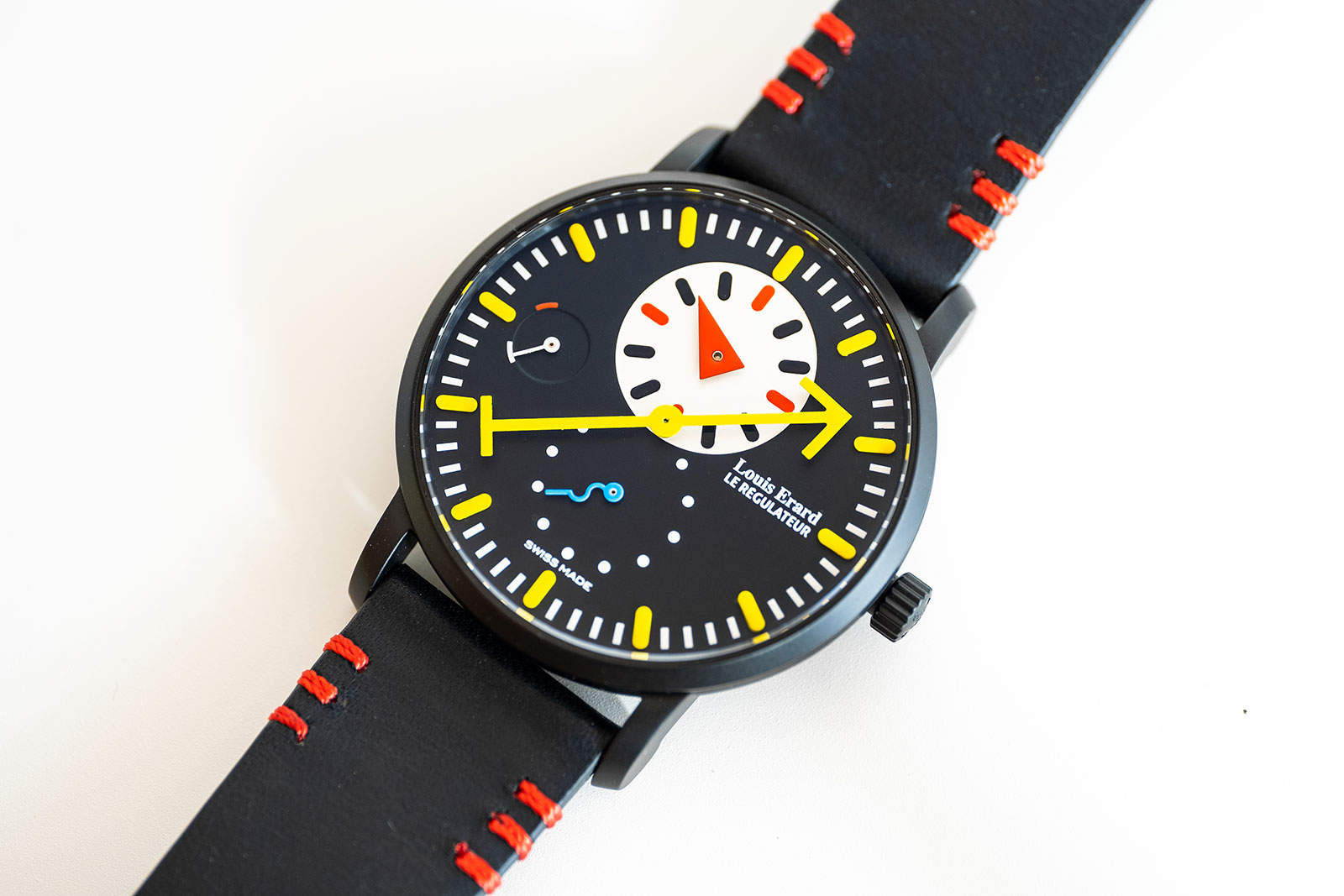 Louis Erard has been around for some 90 years, but for much of that time the brand produced watches for other labels. A decade ago, shortly after new owners took over, Louis Erard began to move slightly upmarket with mechanical watches featuring proprietary modules. But most of its designs were plain or derivative. And so Louis Erard could have been just another brand making mostly anonymous looking watches.

But recently Louis Erard recruited the talented Manuel Emch – best known for reviving Jaquet Droz and then running RJ-Romain Jerome until 2017 – as an advisor and suddenly things have brightened up – literally. Louis Erard has just announced the Alain Silberstein Regulator, a surprisingly affordable wristwatch created by the watch designer famed for his whimsical, Bauhaus-inspired style – captured here in photos taken by a Swiss collector for SJX (scroll to the bottom to read my thoughts on the watch after seeing them shortly after this was published). 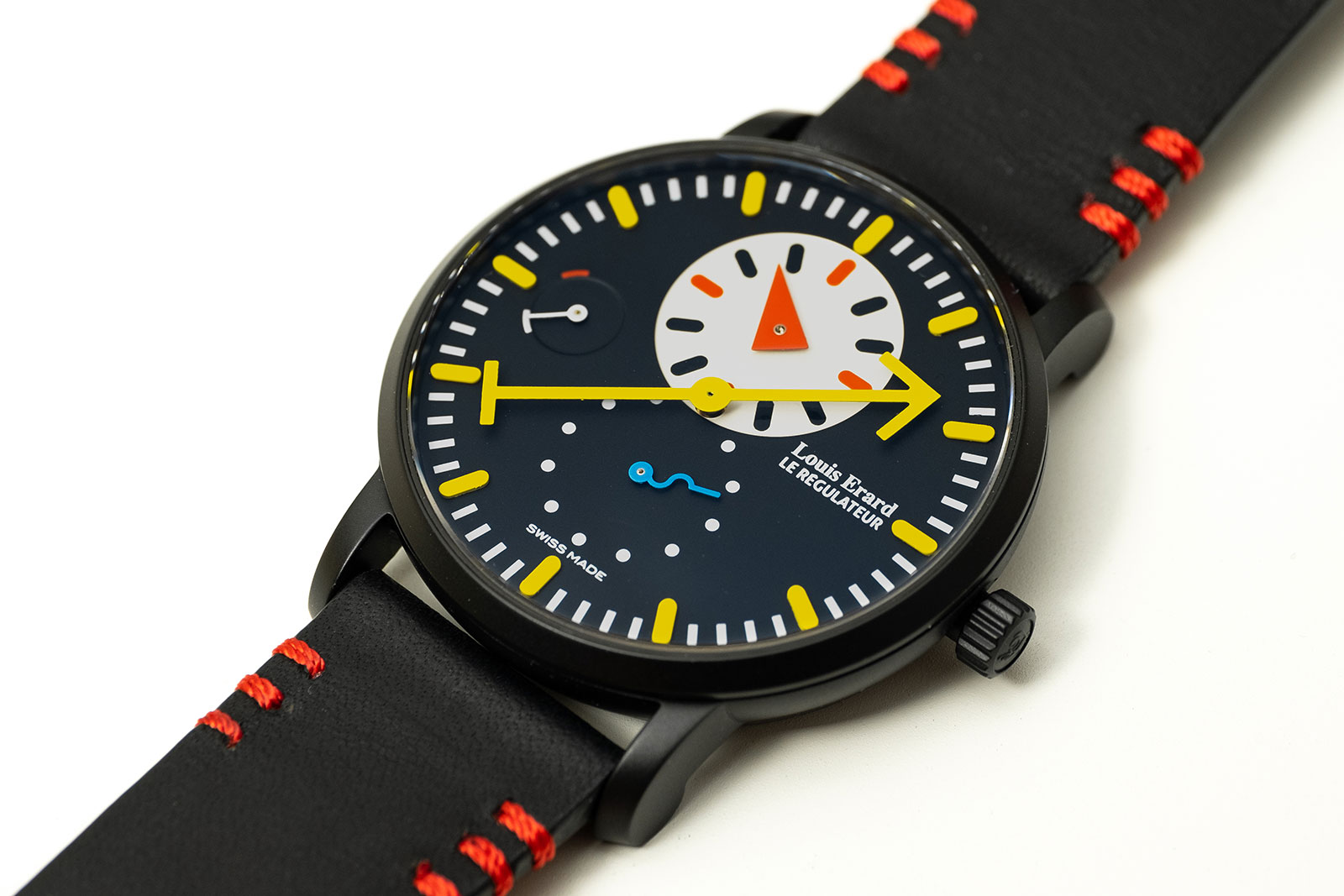 Since Mr Silberstein’s eponymous company went bust in 2012, he has created watches for MB&F and RJ-Romain Jerome. Despite the diversity of the brands he has worked with, Mr Silberstein versatile yet distinctive style manages to ease into each brand’s house style.

Illustrating the magic of Mr Silberstein’s creativity, the new watch is based on one of Louis Erard’s signature models, the Excellence Regulator, which is ordinarily available with a grained or guilloche silver dial featuring Roman numerals – in other words, a staid, classical design. The injection of Mr Silberstein’s trademark bright colours and geometric shapes completely transforms the watch, turning it into something genuinely cool. 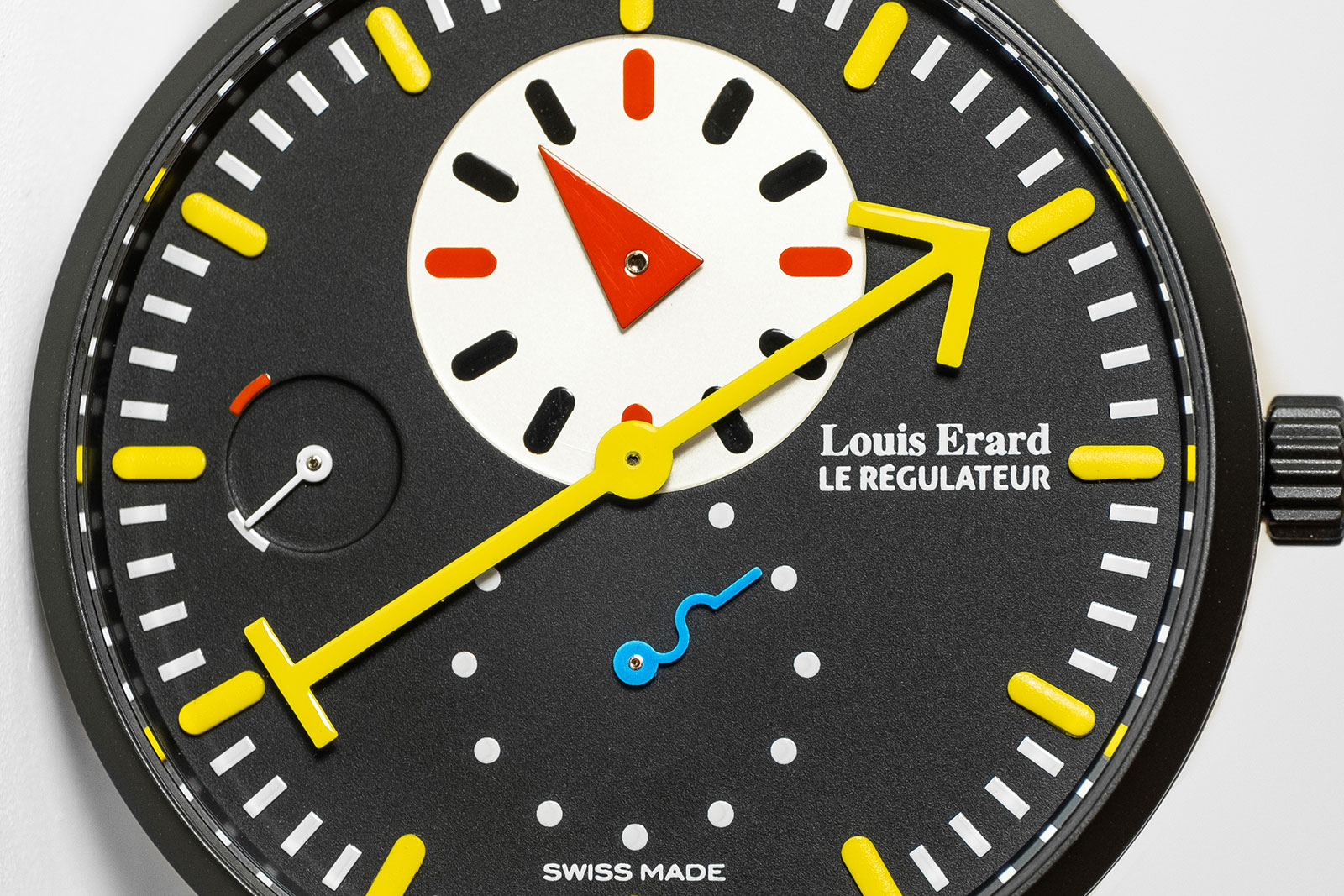 Two dial styles are available – black or matte silver – both exactly the same in design, each distinguished only in colour. Both are instantly recognisable as classic Silberstein.

Though Mr Silberstein has given the watch a massive facelift, the fundamentals remain the same. Time is indicated regulator-style with hours at 12 o’clock and the seconds below, while the sub-dial at nine is the power reserve indicator. 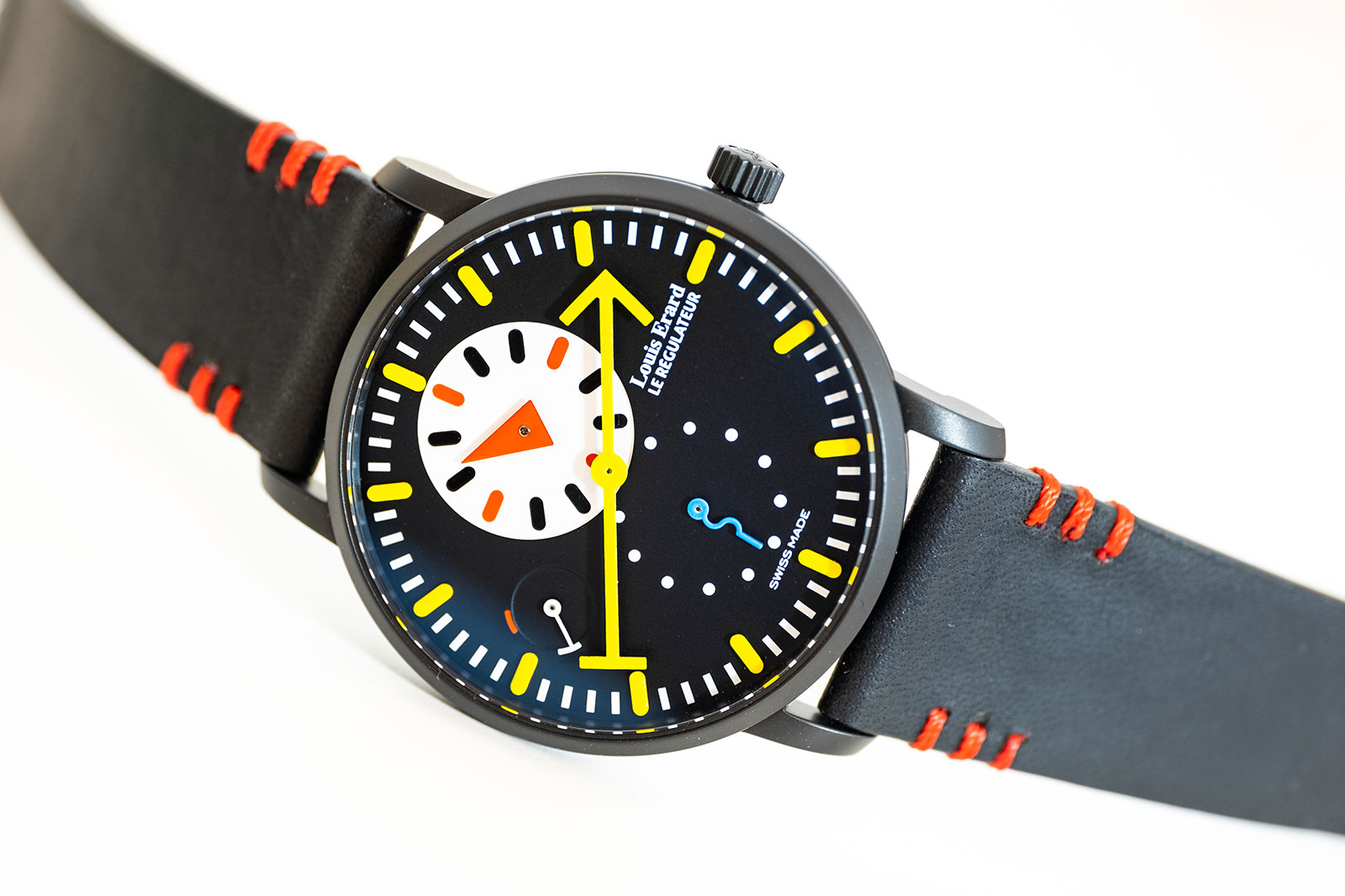 The movement inside is an ETA Peseux 7001, a workhorse movement that’s robust, reliable and one of the rare smaller diameter hand-wound calibres that’s widely available.

Consequently the case is a manageable 40mm in diameter and 9mm high, available either in black-PVD treated steel or polished steel to match each dial finish. The black-coated case in particular looks and feels compact on the wrist. 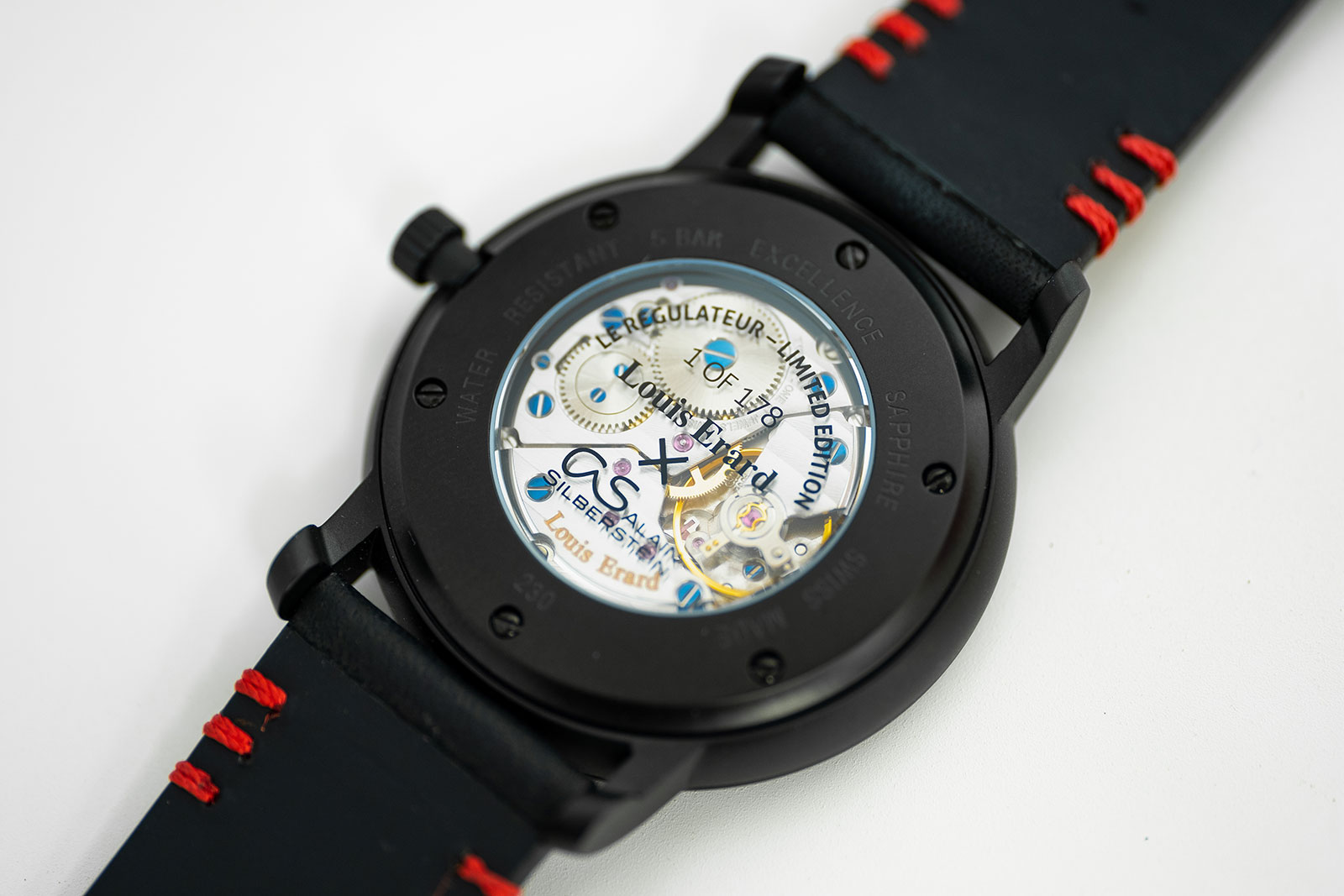 The model with a white dial has blue lacquered, rather than heat blued hands

And best of all, unlike Mr Silberstein’s earlier collaborations, the Louis Erard Regulator is priced under US$3,000, making it even more affordable than Mr Silberstein’s own watches from a decade ago. It’s hard to say no to something so cheerful and sensibly priced.

Addendum October 15, 2019: I got a look at the watches this morning – the regulator is a lot of watch for the money in terms of styling and complication. The design is instantly recognisable to Alain Silberstein fans, who will find it hard to turn down. Overall it’s a winner.

A handful of minor details I did not like. One is the logo on the dial that doesn’t quite suit the design, and another is printing on the case back crystal, which gives it a cluttered look. And the lugs have a thick side profile, though it’s not obvious on the wrist.

But as Manuel Emch explaining during our meeting, the watch was conceived in only several months, so certain compromises had to be made. Louis Erard will continue to revamp its line-up over the next 18 months or so, and some upcoming models look extremely promising in renderings.

The Louis Erard Regulator by Alain Silberstein is limited to 178 pieces in each colour and priced at 2,800 Swiss francs for the steel model, while the black PVD is 2,900 francs. They’ll be available from the end of October. For more, visit Louis Erard.