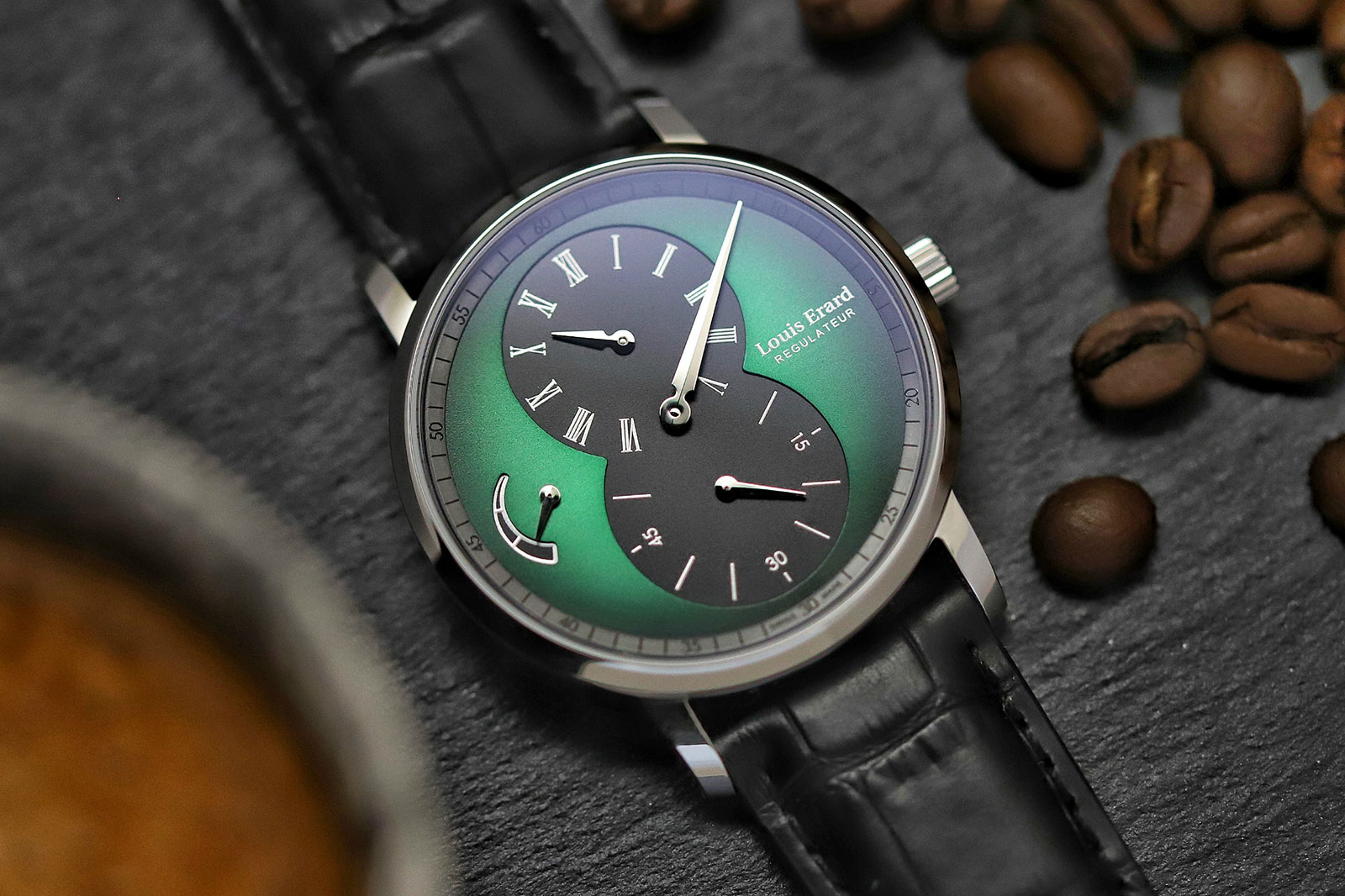 Regulators are all about their characteristic dial where the hour, minute and seconds hands are each located on separate axes – with the minute hand being the largest and longest – a layout originally designed for maximum legibility on clock faces in the mid-18th century. The Louis Erard Excellence Regulator revisits this classical design, but now with a fashionable smoked dial – and an eminently affordable price tag. 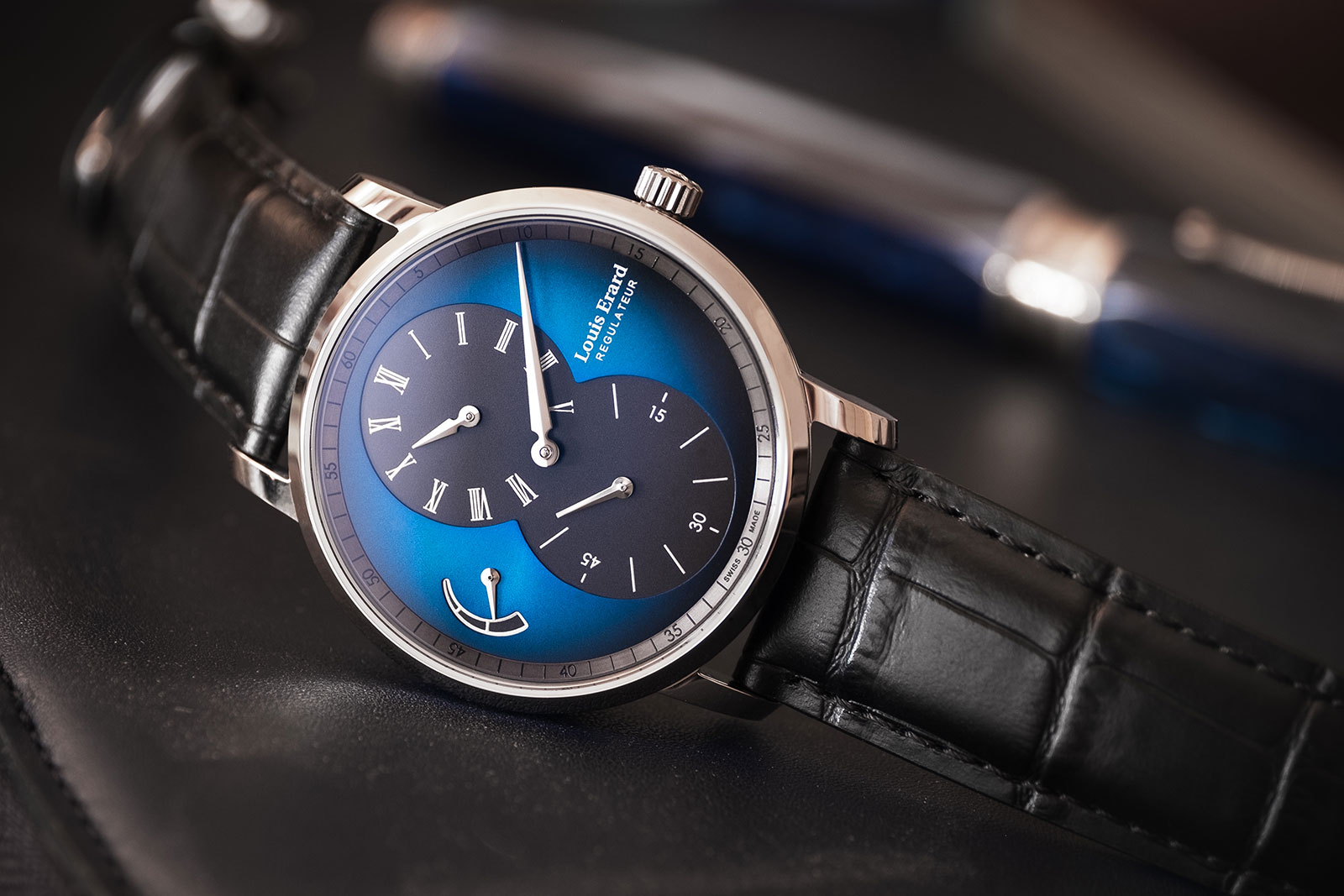 Regulator watches are simple, but are not common at this price point – the Excellence Regulator costs just 2490 Swiss francs, or about US$2600. Louis Erard, however, has made something of a specialty of affordable regulator watches, most notably with the whimsical Alain Silberstein Regulator launched last year that was styled by the eponymous watch designer for Louis Erard.

The value proposition is good, though the dials are definitely reminiscent the fumé dials of H. Moser & Cie, which didn’t invent such graduated-colour dials, but have made them almost synonymous with the brand. Based on the photos, the graduated finish of the Excellence Regulator dials are not quite as not as complex or refined as that on Moser’s watches – understandable and acceptable given the substantively lower price. 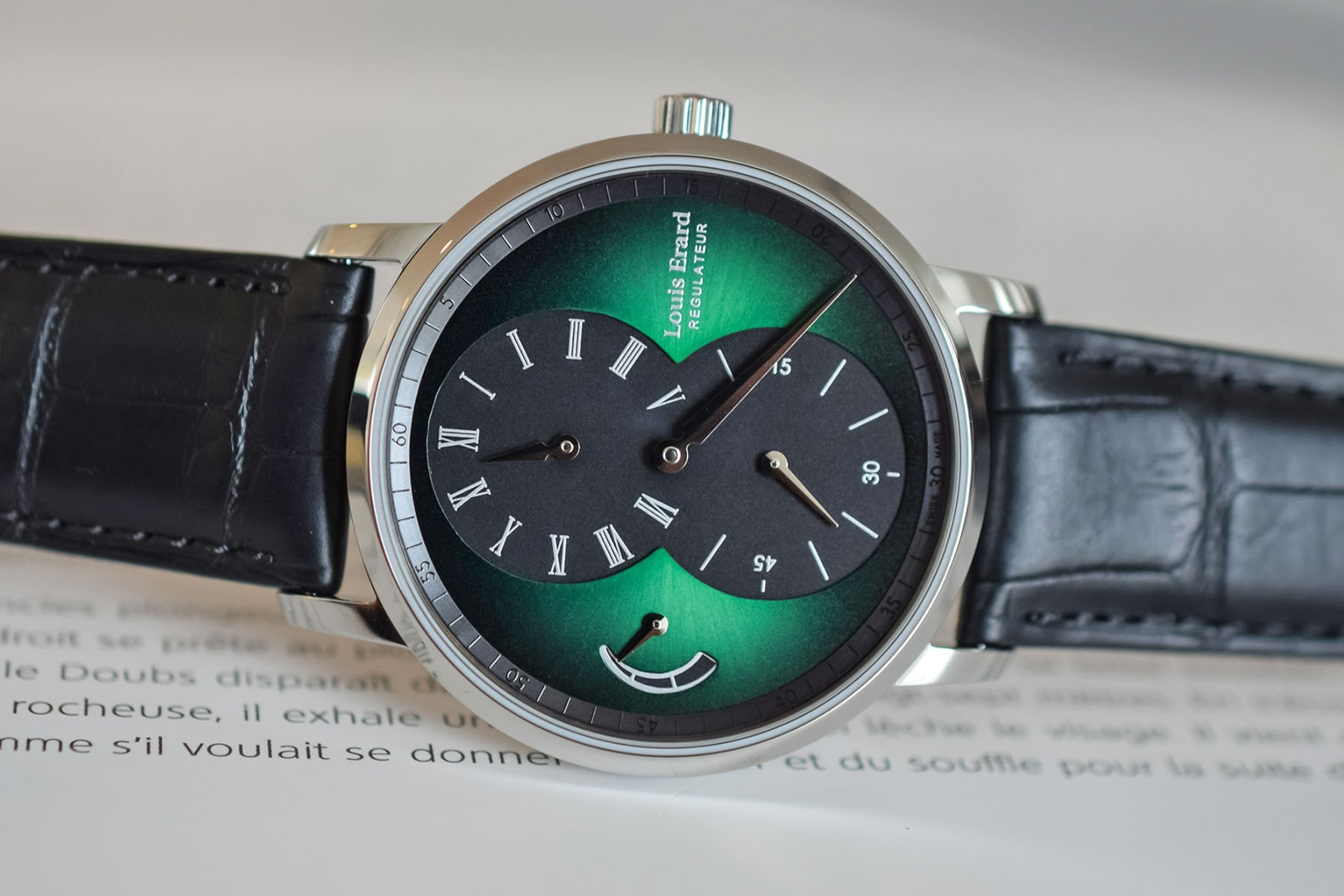 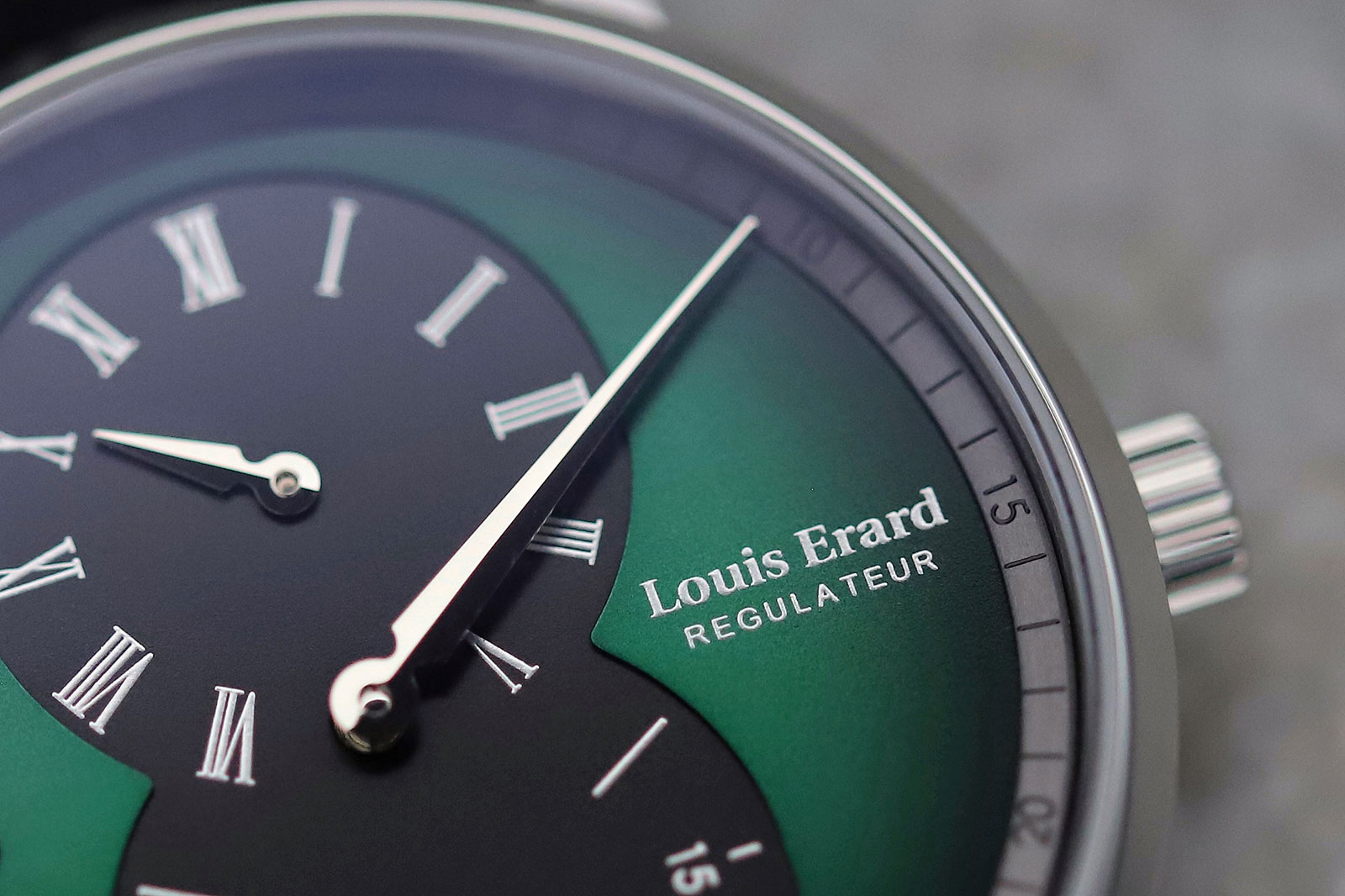 While the regulator layout is unusual, the smoked dials are the highlight. Offered in vibrant and saturated hues of grey, blue or green, the colour gradually tapers off in intensity, turning almost black towards the edges where it meets a grey minute track.

The regulator display of the watch has the hours at 12 o’clock and the seconds at six – the typical layout for a regulator wristwatch (clocks usually invert the two). Compared to the Alain Silberstein Regulator that was more playful, the new models are more classical, having formal Roman numerals and lance-shaped hands.

Because the face is essentially all about the smoked finish, the rest of the dial is simple, but smartly done. I love the use of Roman and Arabic numerals on each sub-dial to distinguish the different indications. There’s also a power reserve at nine o’clock, but it feels bit redundant as the movement will run 42 hours on full wind, which is the industry norm. Nevertheless, the power reserve indicator does help with dial symmetry as it acts as a visual counterweight to the branding at three o’clock. 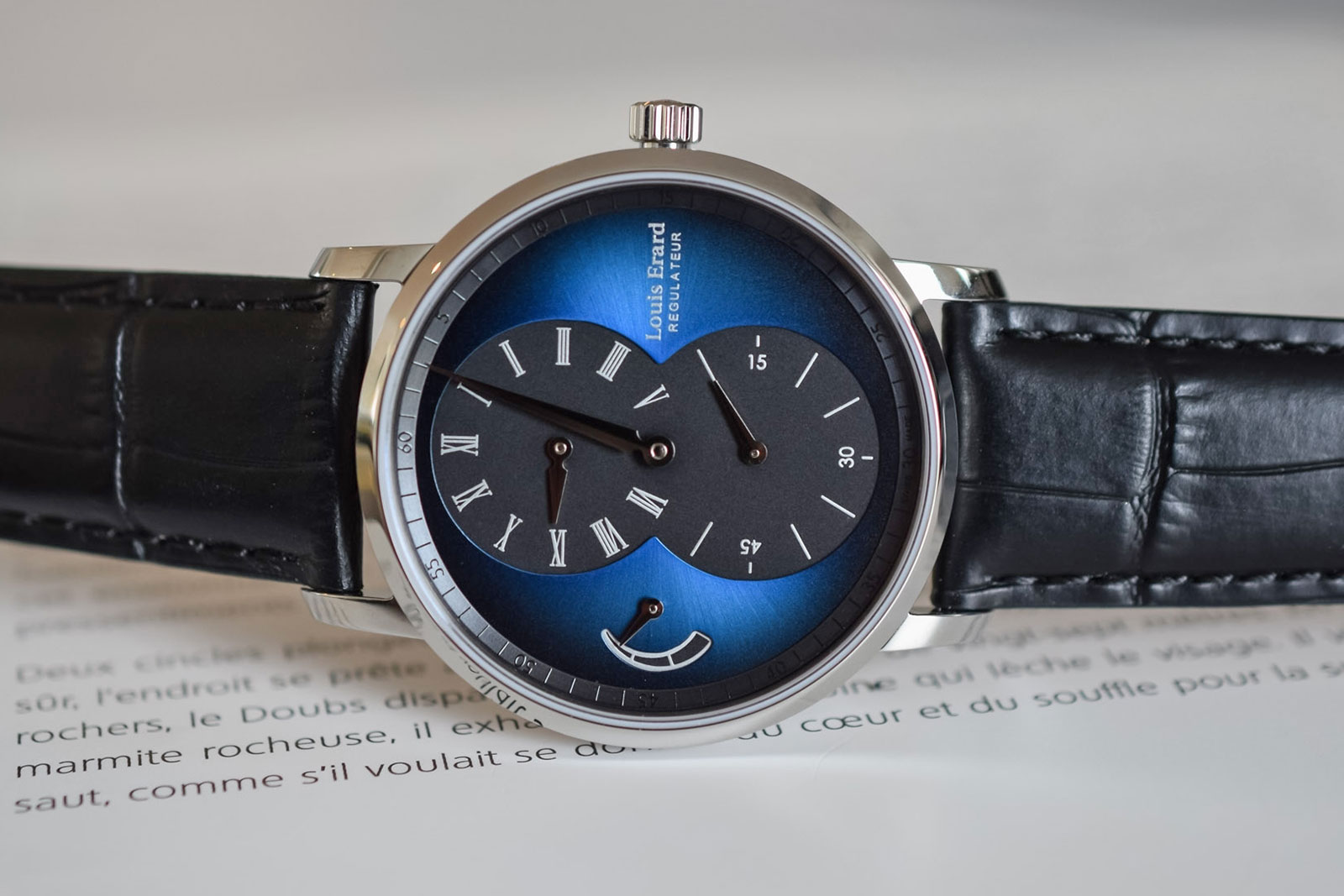 Though the dial finish is new, the watch has the same case as the brand’s other regulator models, which means comfortable diameter of 40 mm in diameter and a slim 9 mm in height – dimensions that wear well.

The key reason for the thinness – and affordability – is the movement. Instead of using an in-house calibre, Louis Erard instead relies on the cost-efficient solution of a workhorse ETA Peseux 7001 as the base movement, which is combined with its own proprietary modifications to create the regulator-style display. 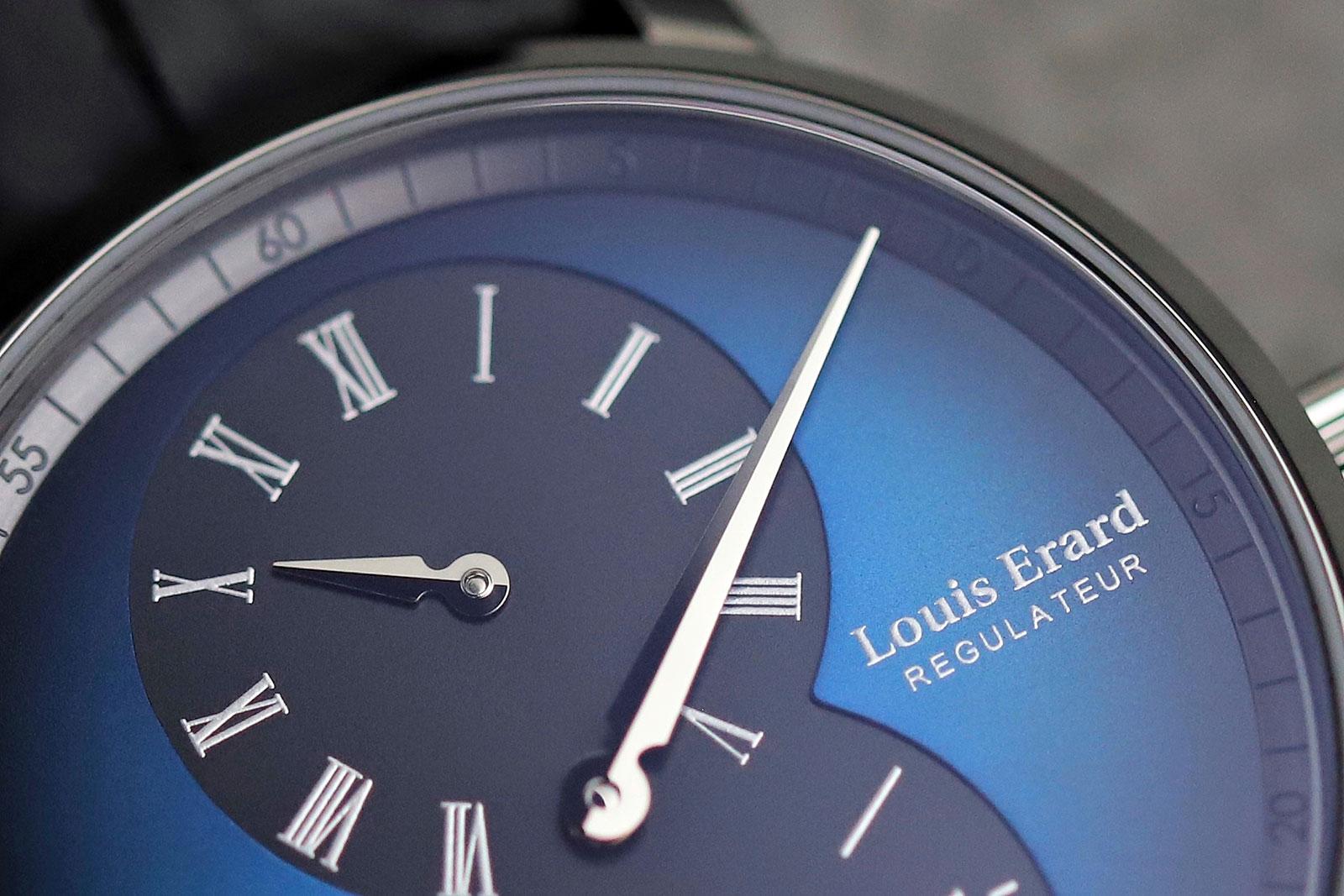 In rose gold with a two-tone dial.