An architect-turned-watch-designer who made his reputation with a distinctive, whimsical style, Alain Silberstein founded one of the most prominent independent watch brands of the 1990s.

Located in Besançon, the historic centre of French watchmaking, the Alain Silberstein brand went under in 2012 but has since enjoyed a revival thanks to a collaboration with Louis Erard that gave birth to an affordable regulator-style wristwatch. More recently, Mr Silberstein designed a charming pendulum clock. 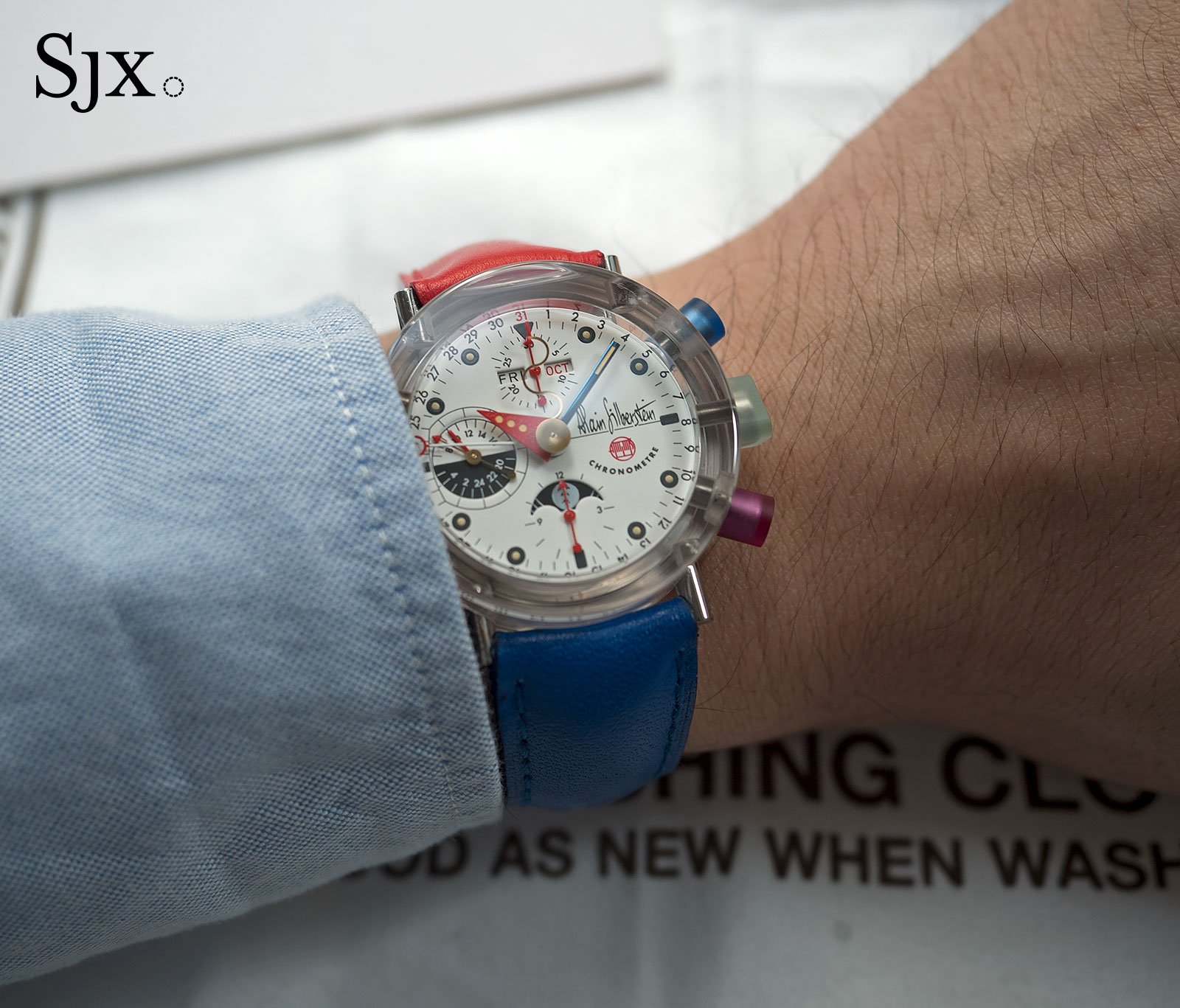 An early Alain Silberstein from the 1990s, this one the uncommon Krono Saphir with a sapphire crystal case

Now the designer is back with a set of wristwatches, once again made by Louis Erard, but this time designed from the ground up as an entirely new model. The Le Triptyque Louis Erard x Alain Silberstein is made up of three watches, all having the same case and design cues, but featuring different complications. They are available individually or as a box set.

The top-of-the-line model is the Le Chrono Monopoussoir Louis Erard x Alain Silberstein, an automatic, single-button chronograph. The other two watches in the set are priced identically but quite different: La Semaine shows the time along with the trademark Silberstein “Smileday” calendar, while Le Régulateur has a regulator-style display. 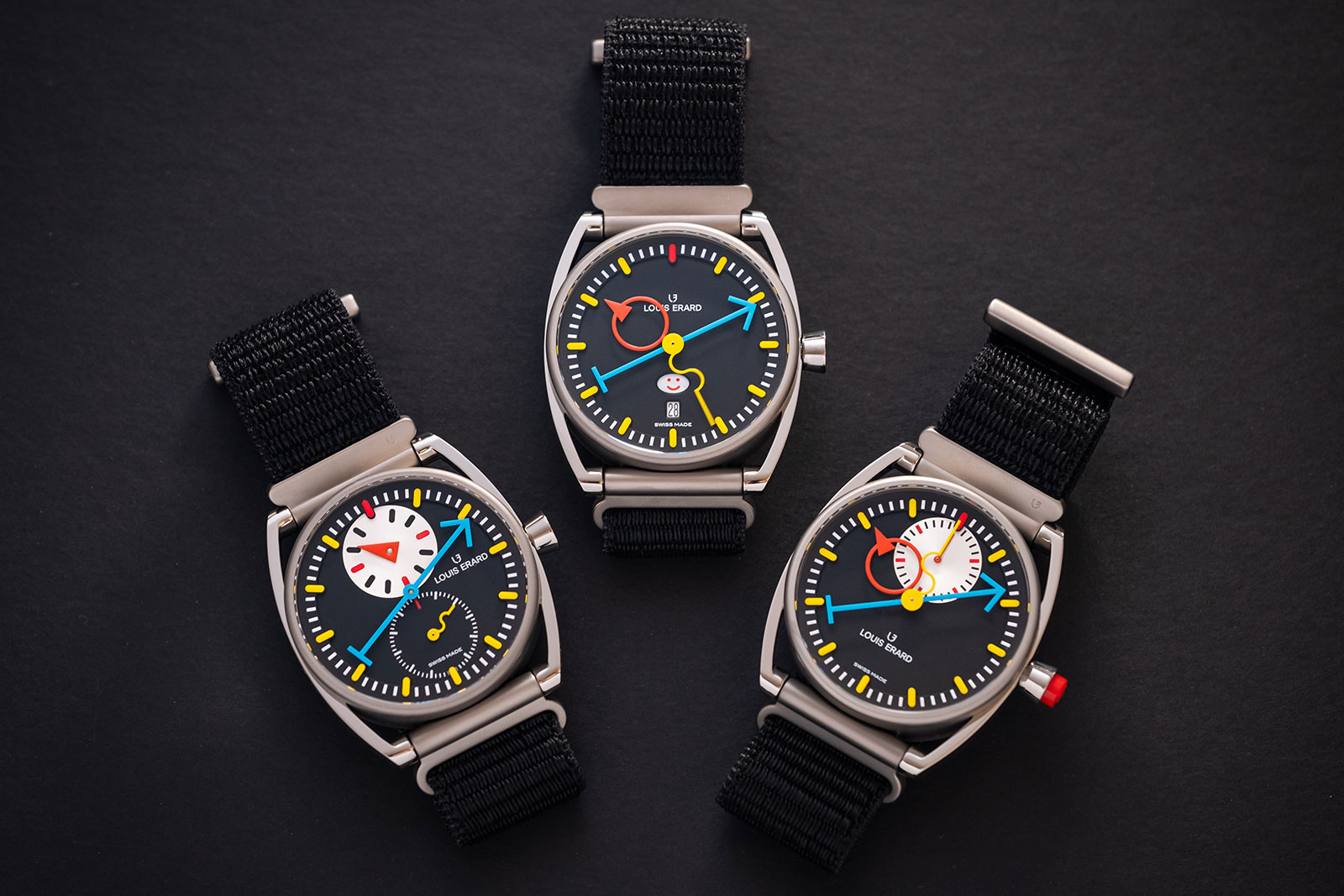 Also, the chronograph costs about US$1,000 more than the other two, a small enough difference that choosing between the three hinges on dial aesthetics, rather than cost. 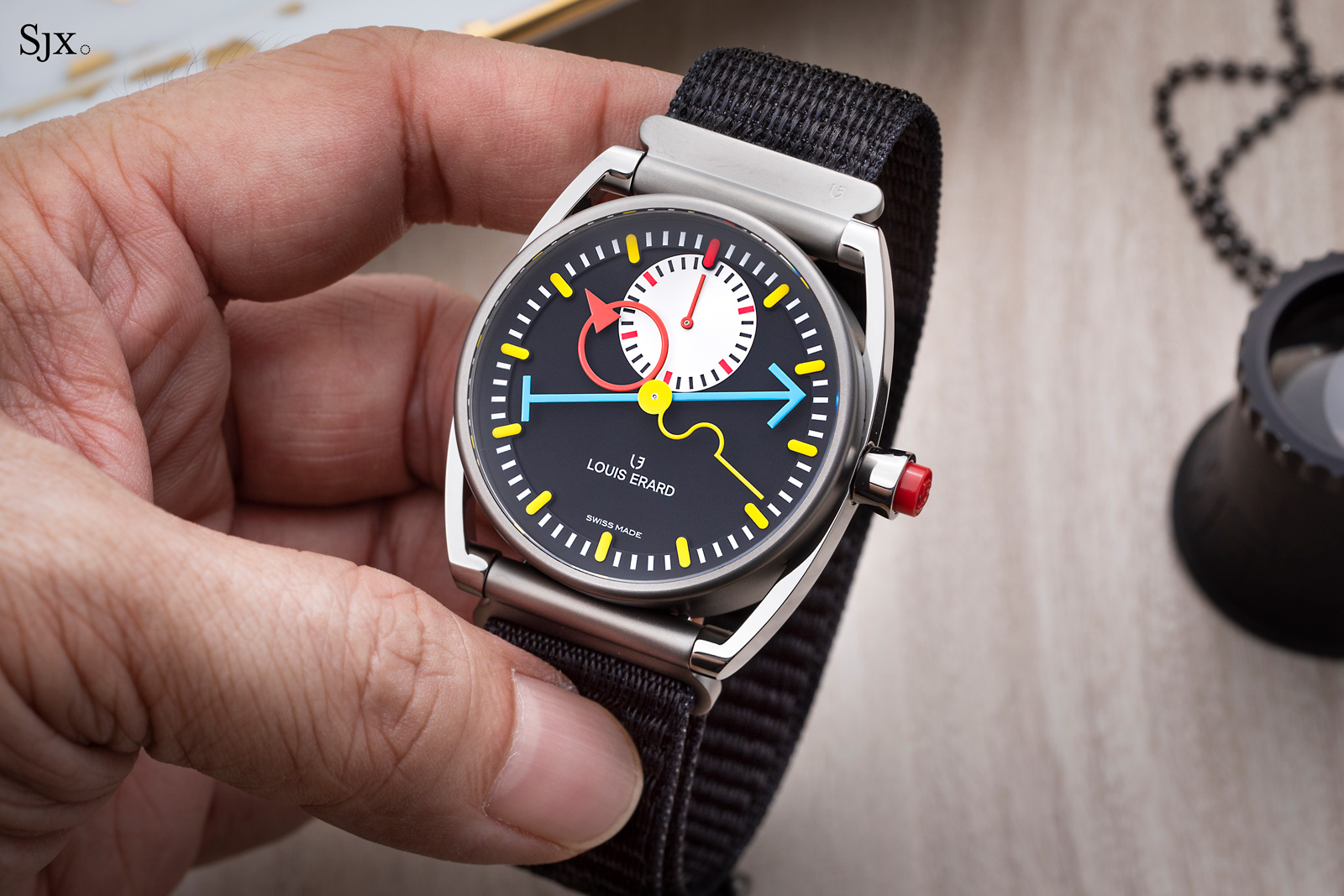 Unlike the original Louis Erard and Alain Silberstein collaboration that was essentially a Silberstein dial installed in a standard model, the watches of the Triptyque are entirely new models designed from the ground up.

Though unconventional, the case is recognisable as an evolution of the original Alain Silberstein watch case of the 1990s, which was a one-piece construction shaped like a tall tuna can. It’s a simple design, but made slightly fancier now with brancard lugs. The loop attachment for the strap, however, is a bit dinky, and the watch feels large, but light, on the wrist. 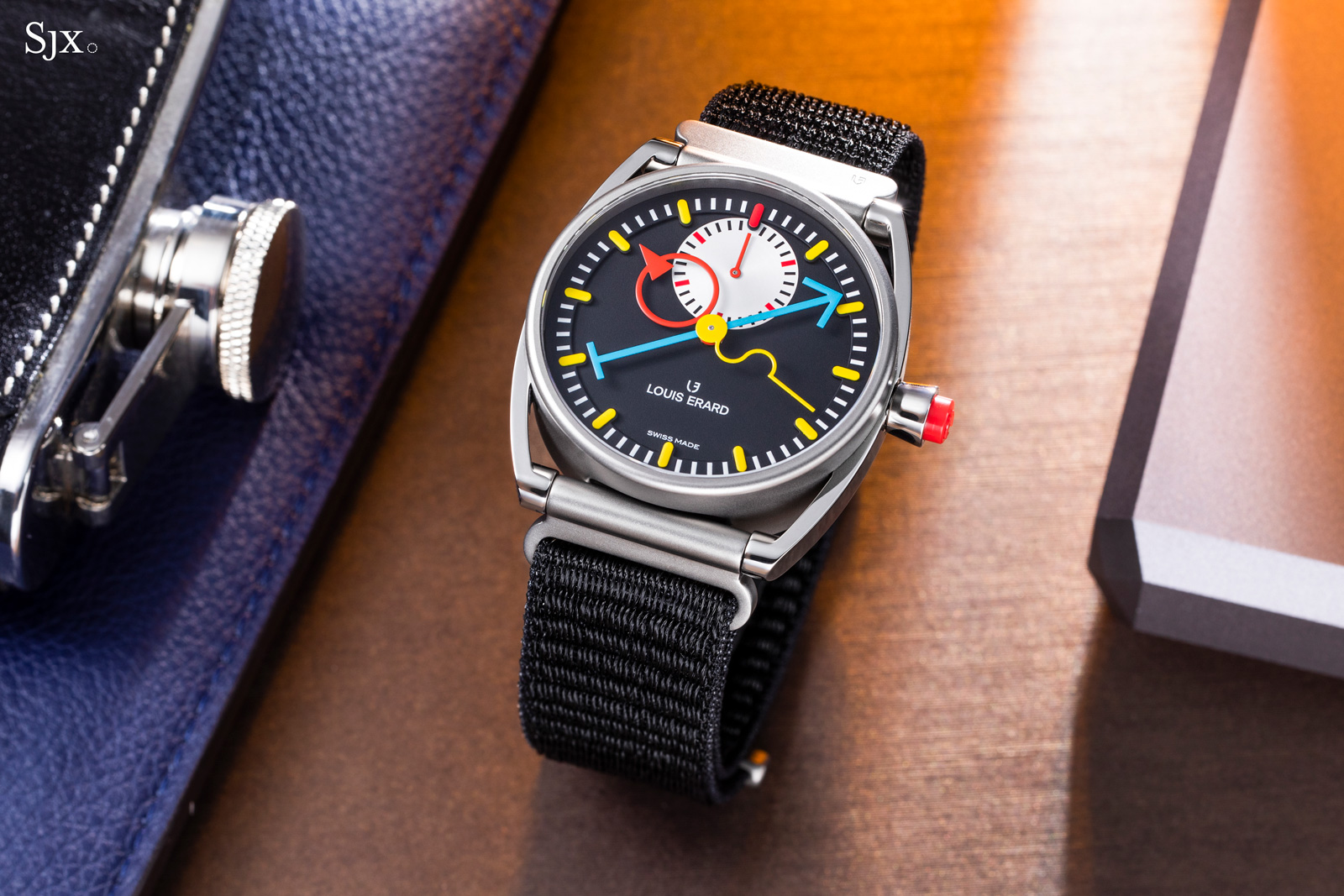 Simple but distinctive, the dial is very much Silberstein in its colours and geometric shapes. Though different, the hands are modelled on the original Silberstein designs of the 1990s.

Admittedly, the hands makes reading the time confusing when they are positioned close together or overlapping. But it’s a thoroughly worthwhile tradeoff for the design. 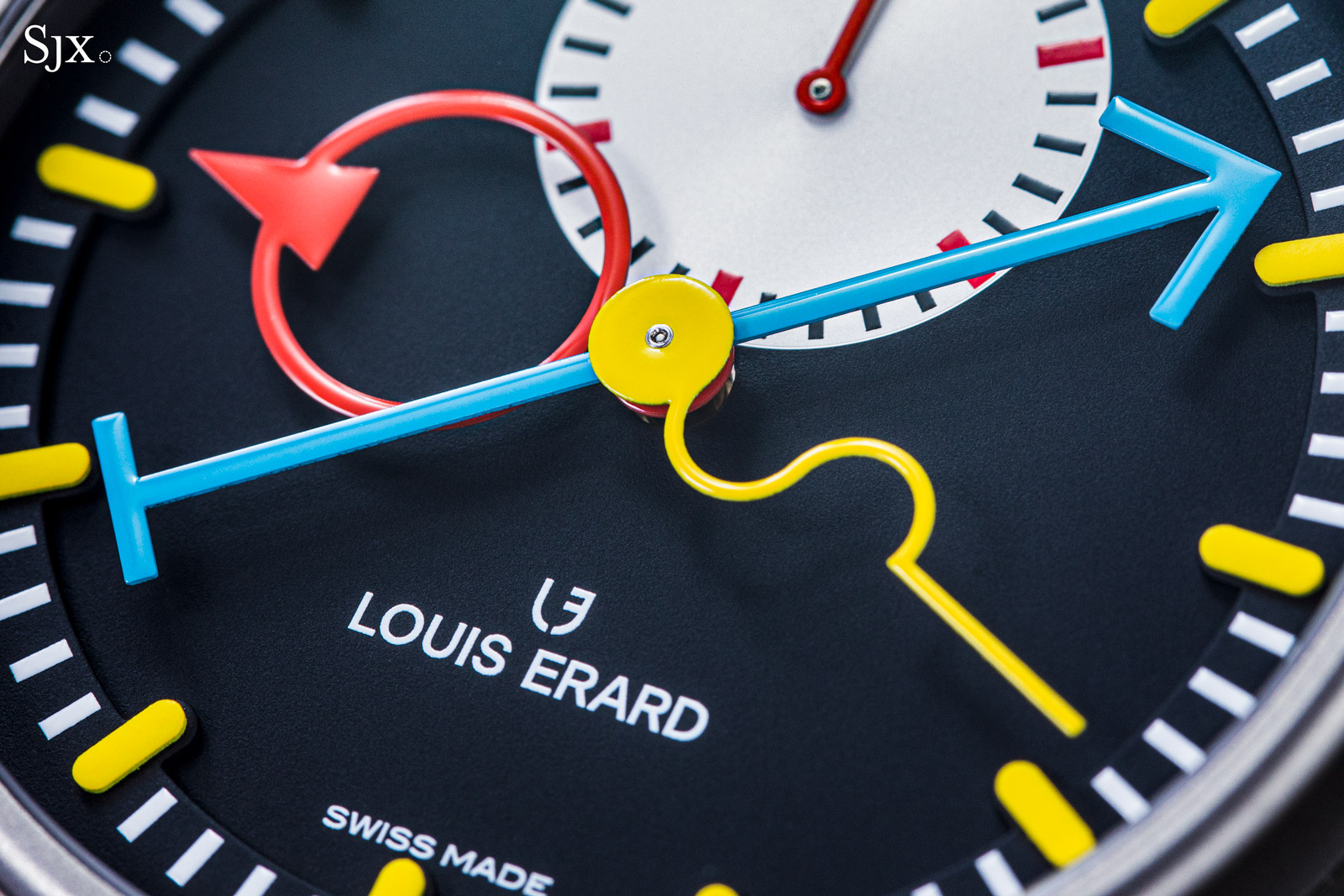 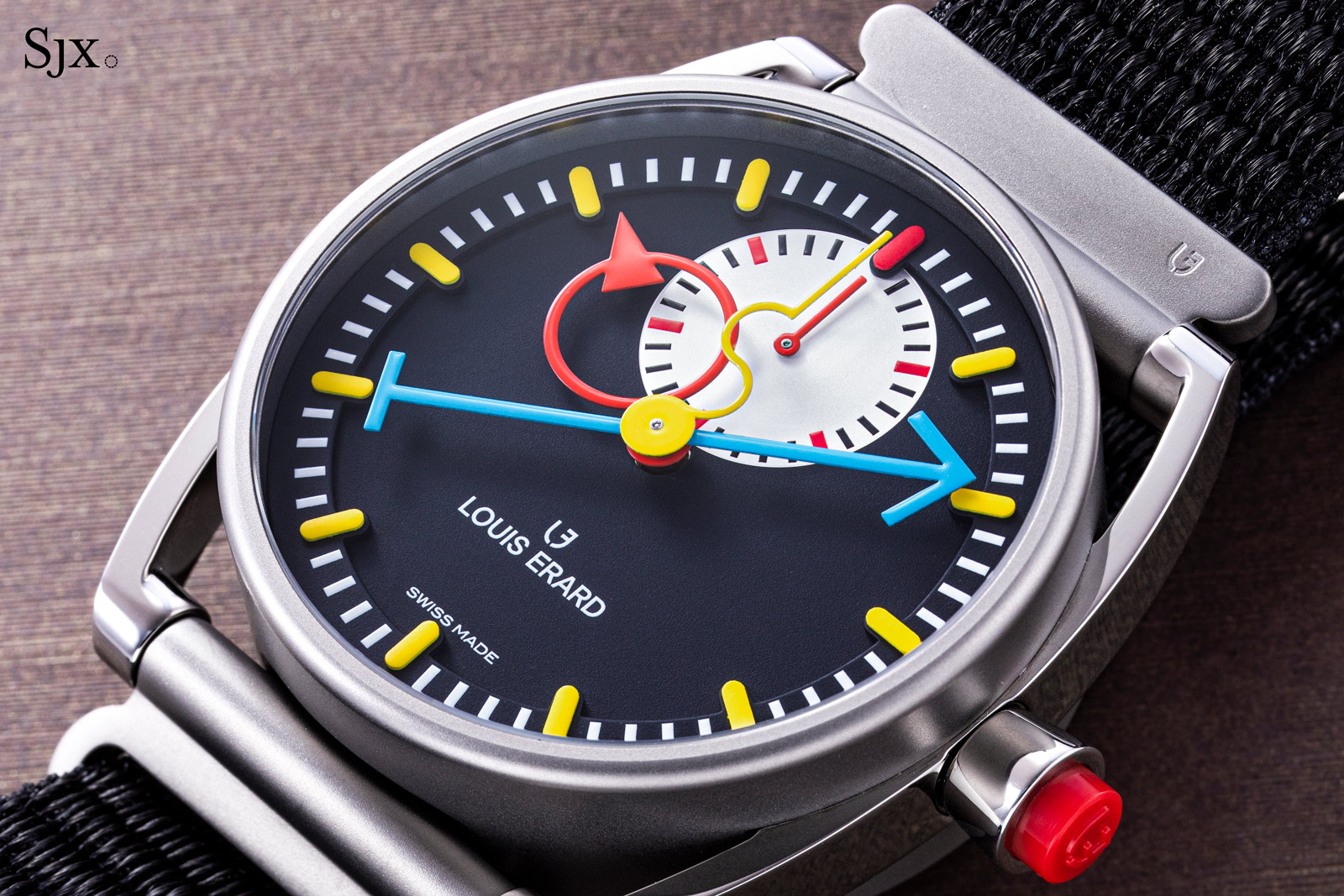 The finishing of the case and dial are simple and good enough. A few elements could obviously have been done better, like the plastic pusher in the crown and hiding the stock movement, but those don’t detract much from the appeal of the watch. 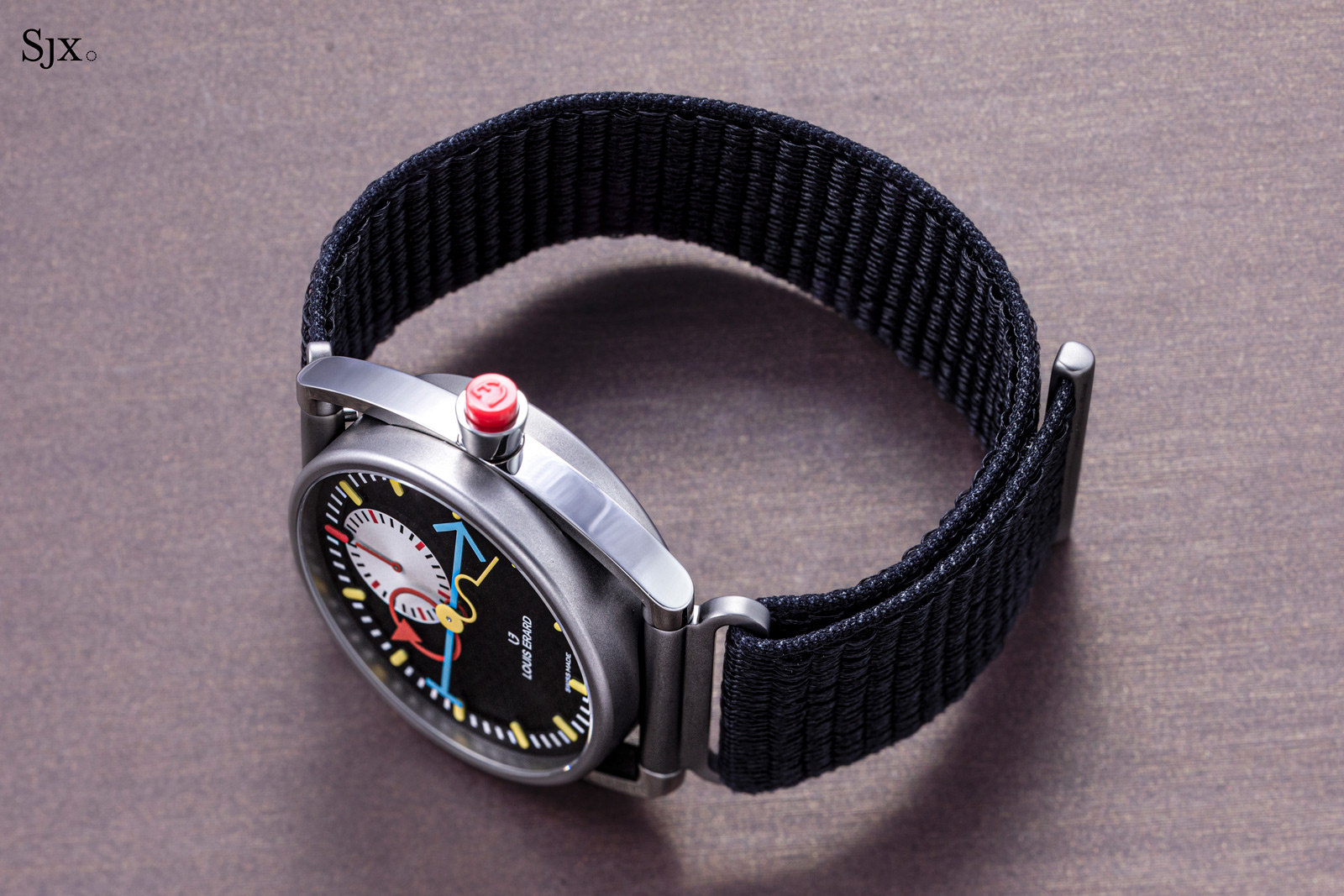 There are several chronographs that are clearly better value in tangible terms, boasting superior movements and overall finishing for the same or less money. Notable examples include the Tudor Black Bay Chrono and the Longines Avigation BigEye.

But none have an aesthetic as original as Alain Silberstein’s style, and that makes Le Chrono unique and also a compelling value proposition. Where Le Chrono falls short in fit and finish, it more than makes up for in design and scarcity since only 178 of each model will be made. 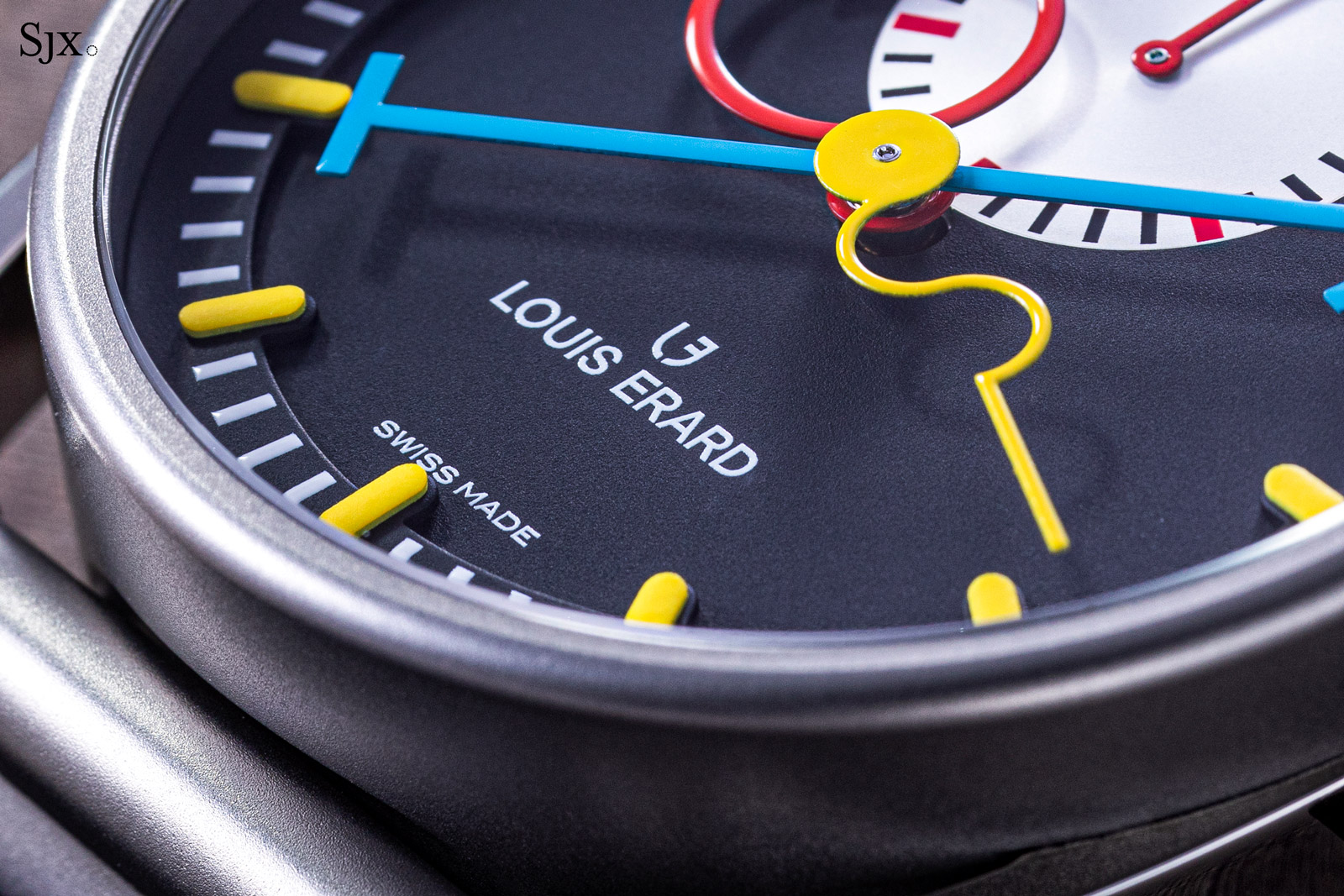 Bauhaus with a twist

The Alain Silberstein house style is best described as Bauhaus having fun. It’s most obvious on the dial, which is made up of geometric shapes in the primary colours of red, yellow, and blue.

The central seconds hand is a wavy “S”, the hour hand incorporates the traditional Silberstein triangle by making it the tip of a large, open circle, and the long minute hand takes after the one-handed Pikto – all elements taken from the original designs of the 1990s. 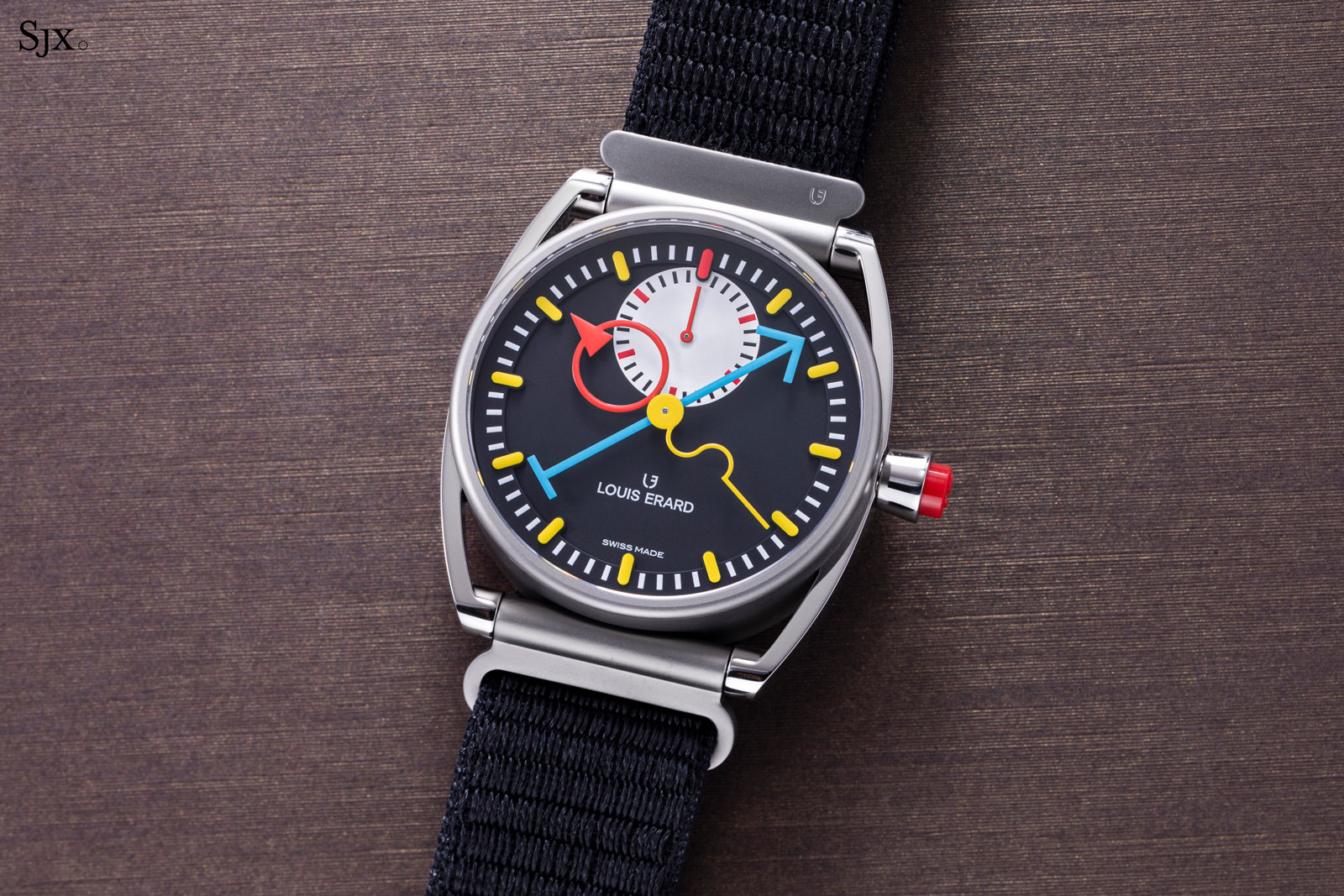 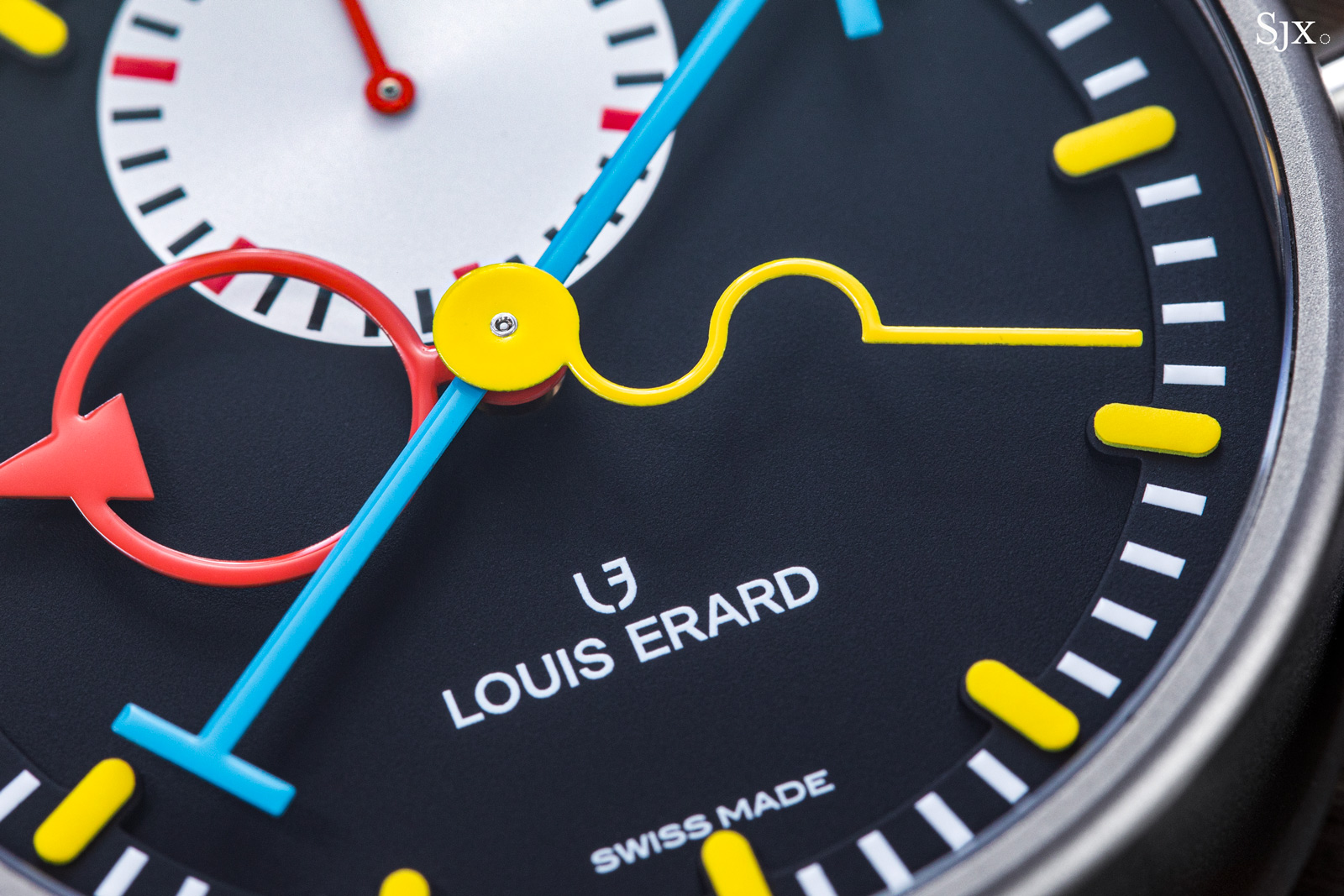 Perhaps the most famous historic Alain Silberstein model was the Krono, which had a conventional dial layout with a Valjoux 7750 or Lemania 5100 movement inside.

This is a return to that, but with twist: the chronograph is a mono pusher with only a single counter. It’s a clean and concise expression of a stopwatch that goes well with the Silberstein style.

The register at 12 o’clock counts the minutes, with the elapsed seconds relying on yellow central seconds hand. Reading the chronograph is easy, since the indicators are clear and large. 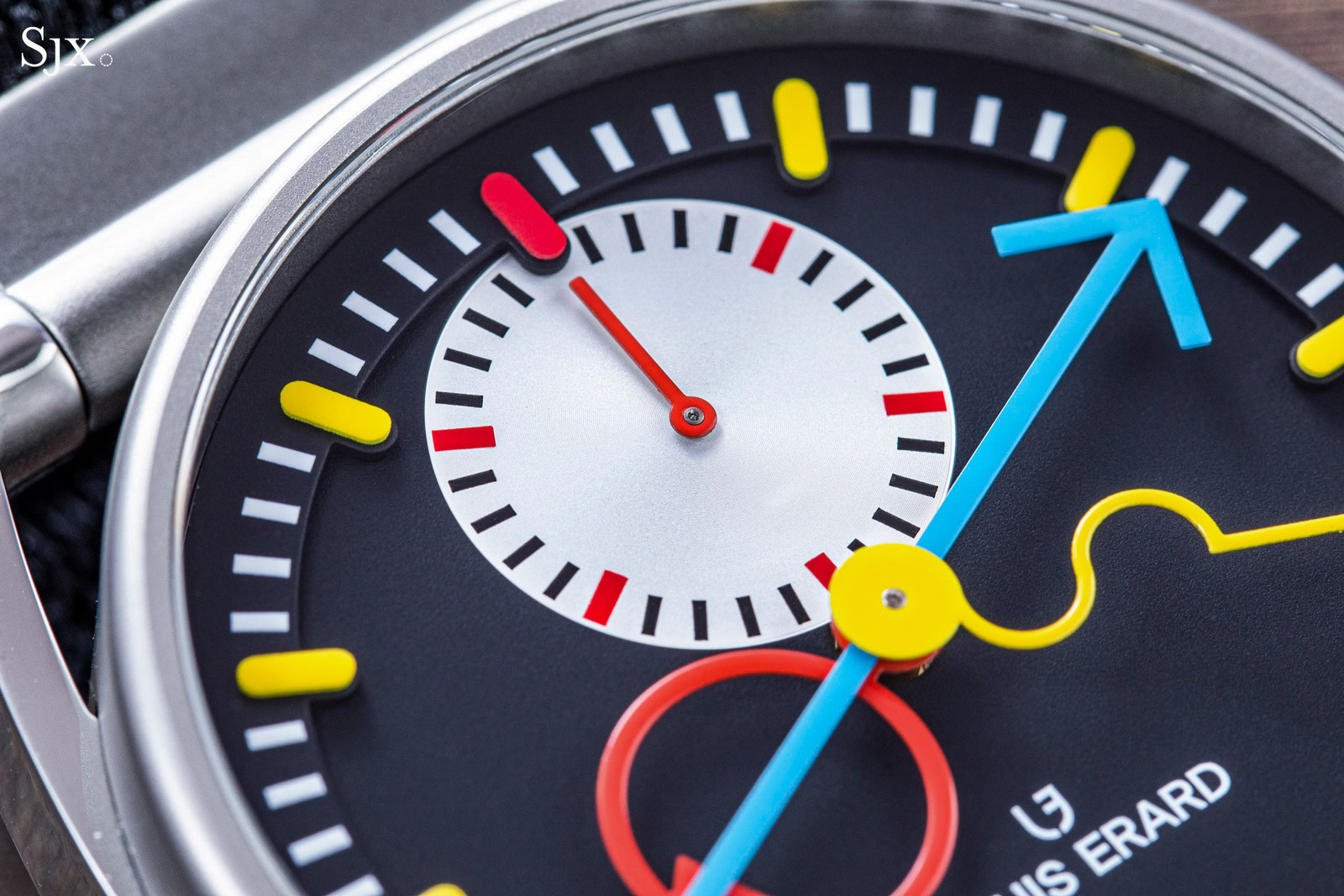 Conversely, reading the time is less intuitive when the hands are close enough to overlap, because the hands take a bit of getting used to. That’s due to the width of the hour hand, as well as the length of the minute hand, which makes it seem double-ended.

The dial is straightforward in execution, which suits the style and price. All the elements are cleanly finished, with no elaboration. One detail that’s a useful extra is the raised minute track that also holds the yellow hour markers, which prevents the dial from looking too wide and flat. Another element of Bauhaus design are rounded corners and metal tubes, which is exactly what the case is. The case middle is a one-piece affair with a flat case back secured by screws, just like the Silberstein watches of the 1990s.

But instead of the stubby lugs of the originals, this has brancard, or “stretcher”, lugs: a pair of arms on each side of the case that secure the strap. While the arms might appear to pivot, they are fixed bars that sit in a recess on the sides of the case. 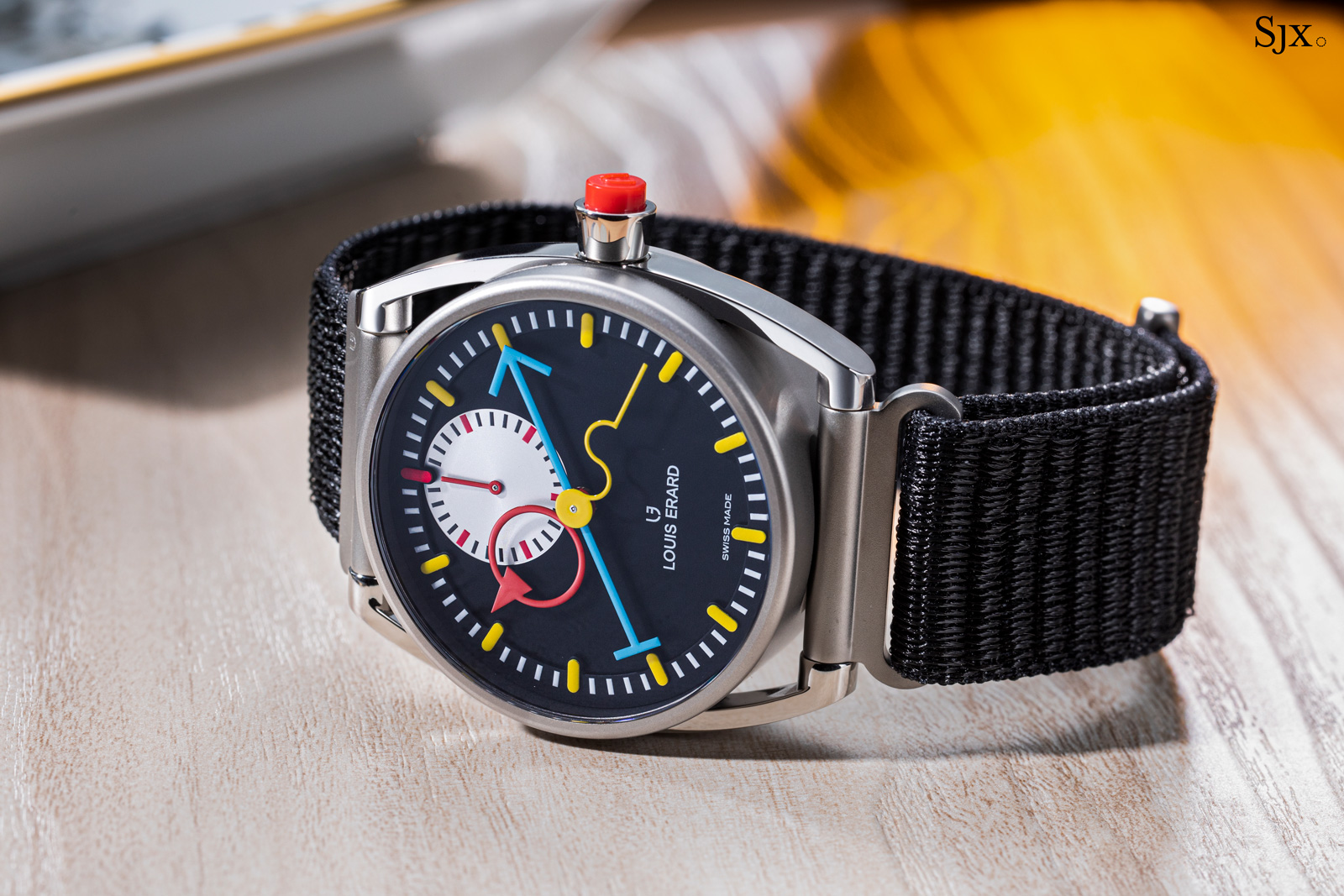 The design makes the case seem larger, although it is actually quite compact in diameter at just 40 mm. But that is not surprising, since the chunky feel has always been one of the characteristics of Silberstein designs.

The case is thick, just like most of the original Silberstein watches were. The chronograph is 13.9 mm high, and sits tall on the wrist. Its height is accentuated by the position of the brancard, which sits in the middle of the case. Though the other two models in the triptych are thinner, the difference is marginal at a bit over 2 mm, so they are equally thick. 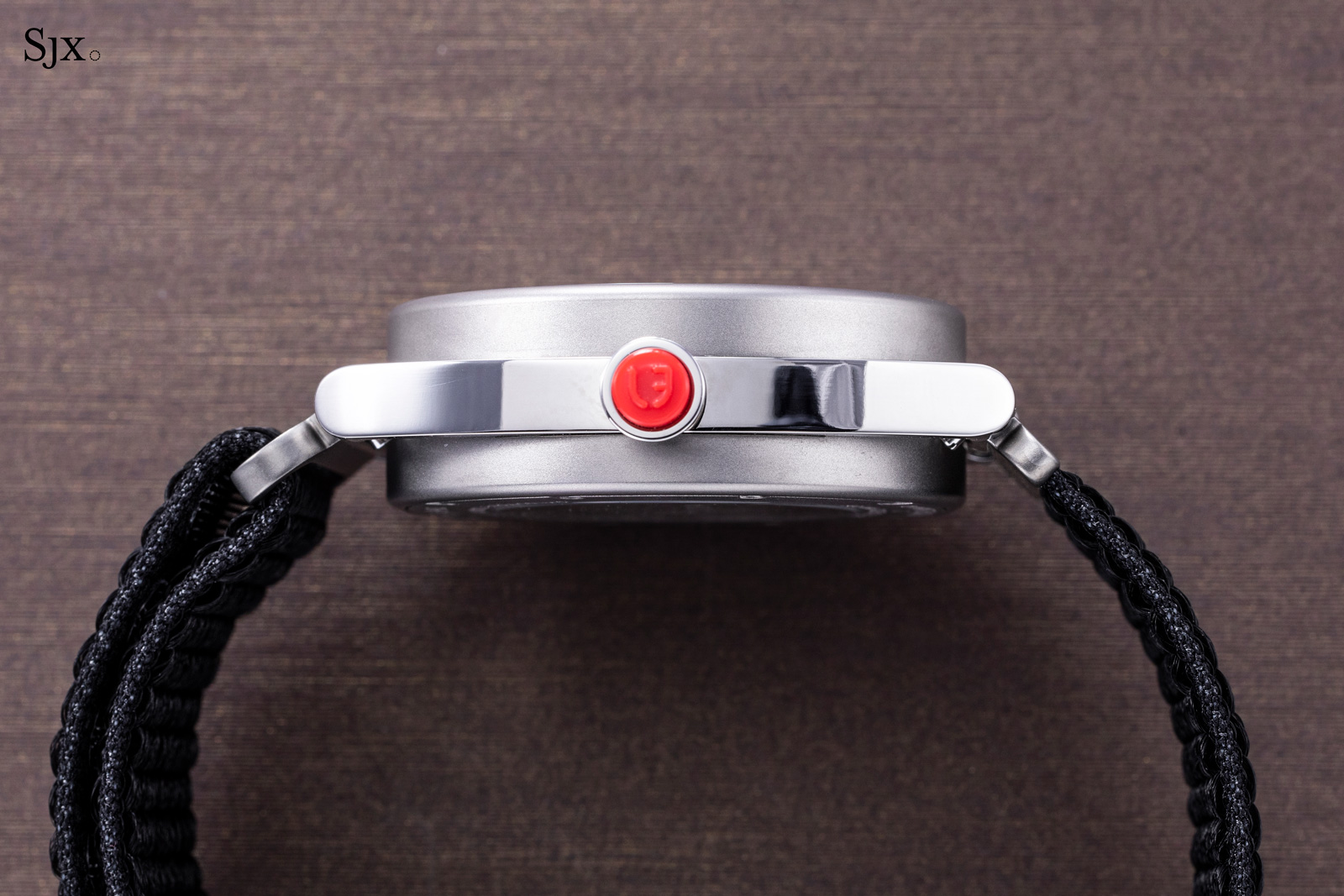 But the case is all titanium, and its walls are probably quite thin, so the watch is lightweight.

Though the material is the same throughout, the components are finished differently. The middle is sandblasted titanium, while the arms are polished.

The two surfaces create a useful contrast between the components, though the polished arms are tumble polished rather than mirror finished, which is the only cost effective solution for a watch of this price. 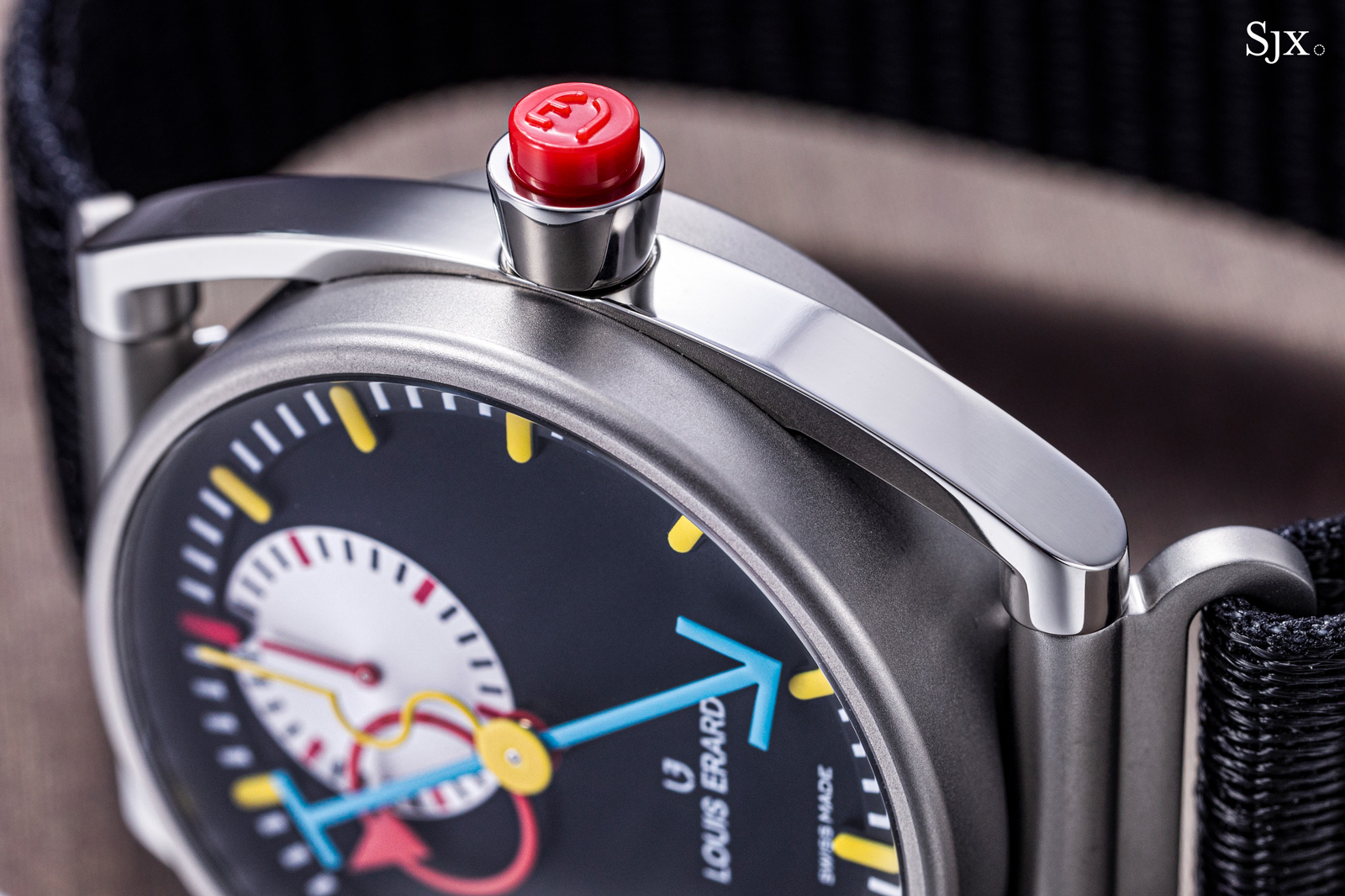 The part of the case I wish were done better is the chronograph pusher inset into the crown. It’s made of red plastic and feels inexpensive even on an affordable watch.

While I appreciate the cost constraints given the price of the watch, and the utility of colour on the case, I would have preferred a no-frills titanium button just because it has a superior tactile feel. 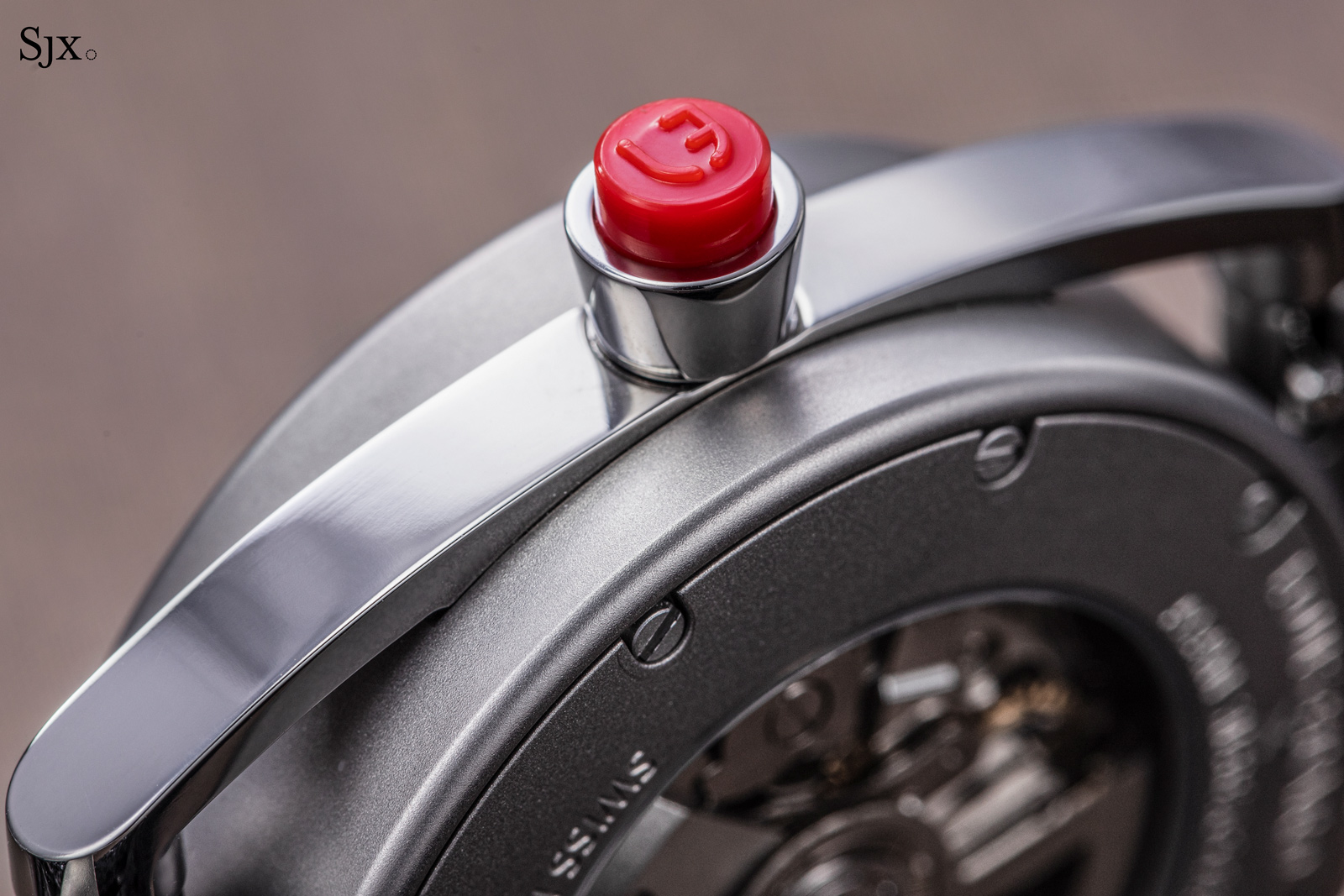 Another element of the case that doesn’t work for me are the loop attachments for the fabric strap. They are functional and convenient, having built-in quick release for the spring bars, but look odd as they break up the lines of the case.

A conventional strap that attaches directly to the arms on the case would look better in my opinion, but this is a non issue since the strap is easy to replace. 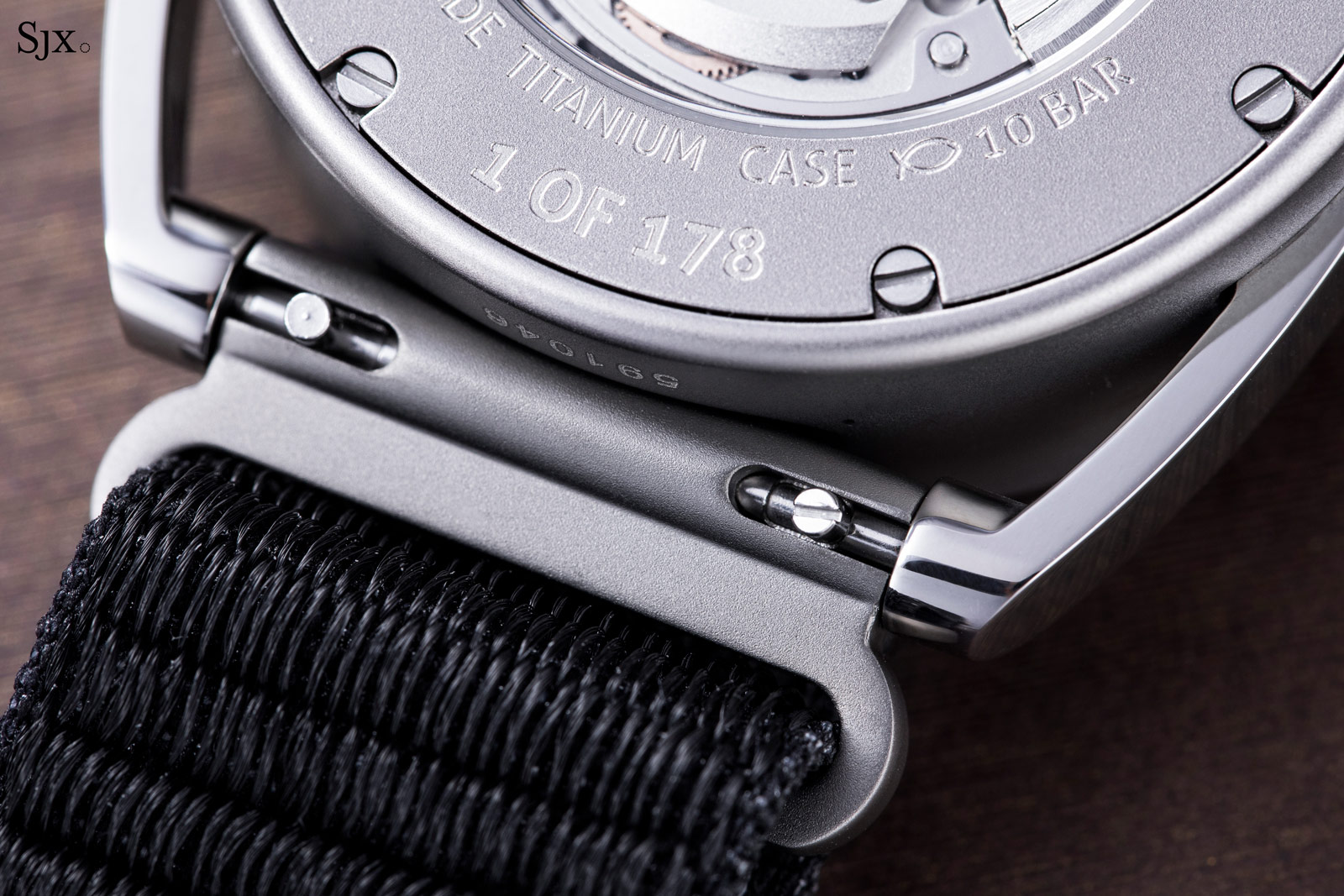 The twin tabs to release the spring bar from the lugs

Like many other Louis Erard watches, Le Chrono is powered by a Sellita movement, this time the SW500 MPCa.

Based on the SW500, which is a clone of the ETA Valjoux 7750, the SW500 MPCa has been modified to be a single-button chronograph, with the pusher in the crown responsible for start, stop, and reset.

While the SW500 (or 7750) is common in chronographs in this price range, a mono-pusher variant is uncommon, which makes Le Chrono a standout. It feels like a 7750 in operation, the winding is heavy and the chronograph pusher stiff. 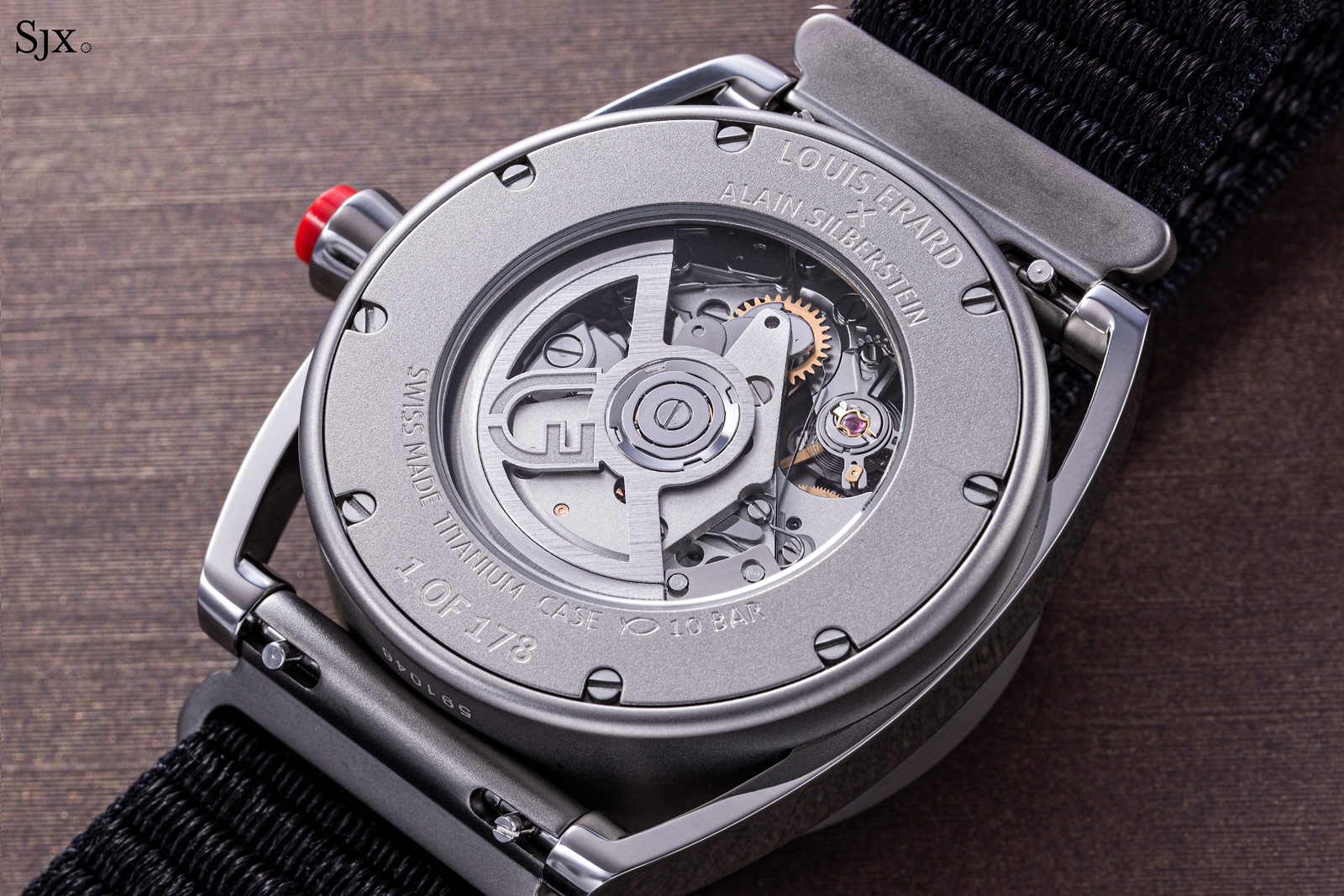 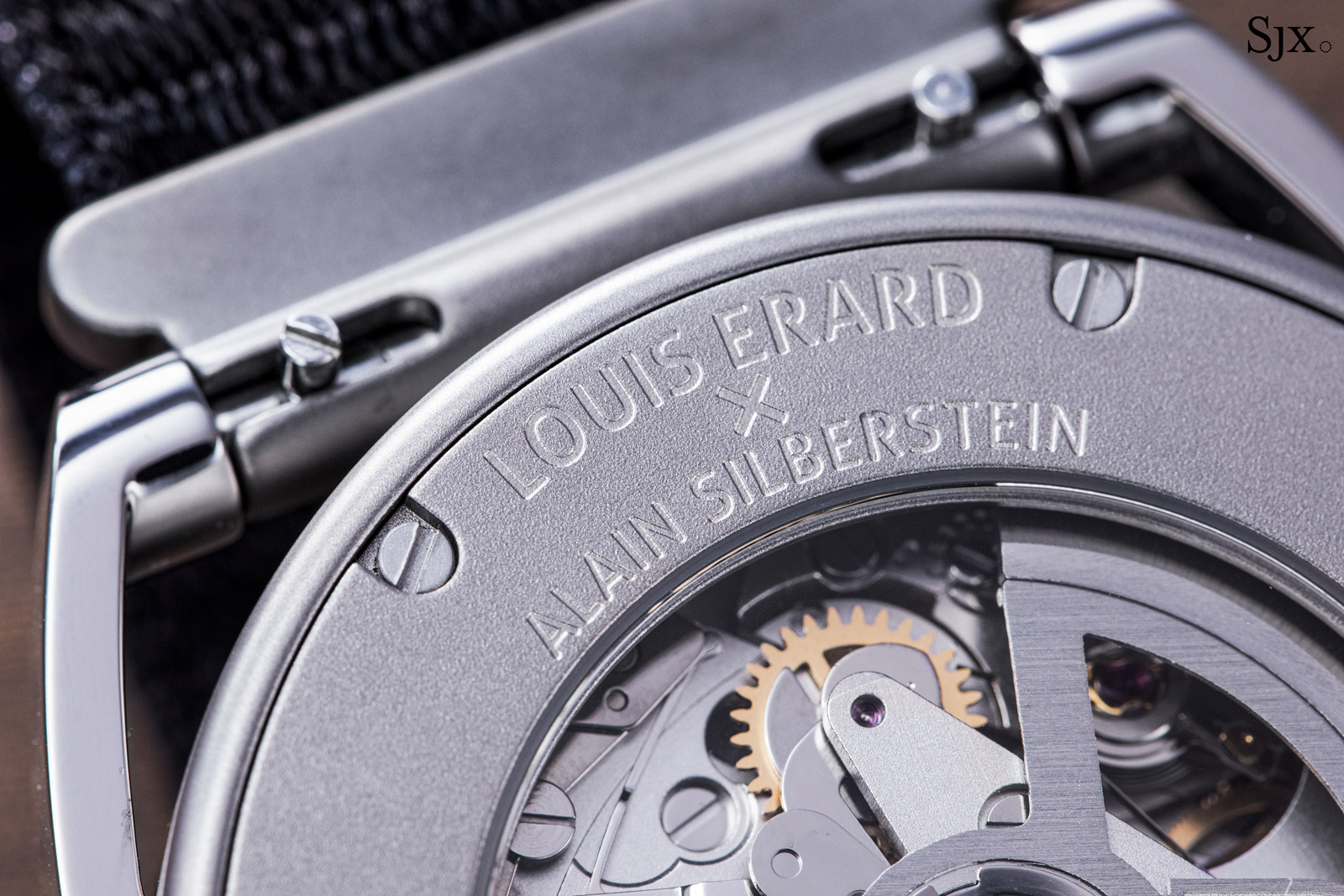 While the modification of the movement to transform it into a mono-pusher chronograph is an achievement at this price, the calibre has not been dressed up at all. Functionally, the movement is no doubt perfect – it will likely run for a long time without a service and then it’ll be easy to service – but it isn’t pretty.

The movement is raw and industrial, so the view through the display back isn’t very enjoyable. That’s certainly a necessity at the price, but given the plain looks, a solid back would have been useful. The cam that controls the chronograph 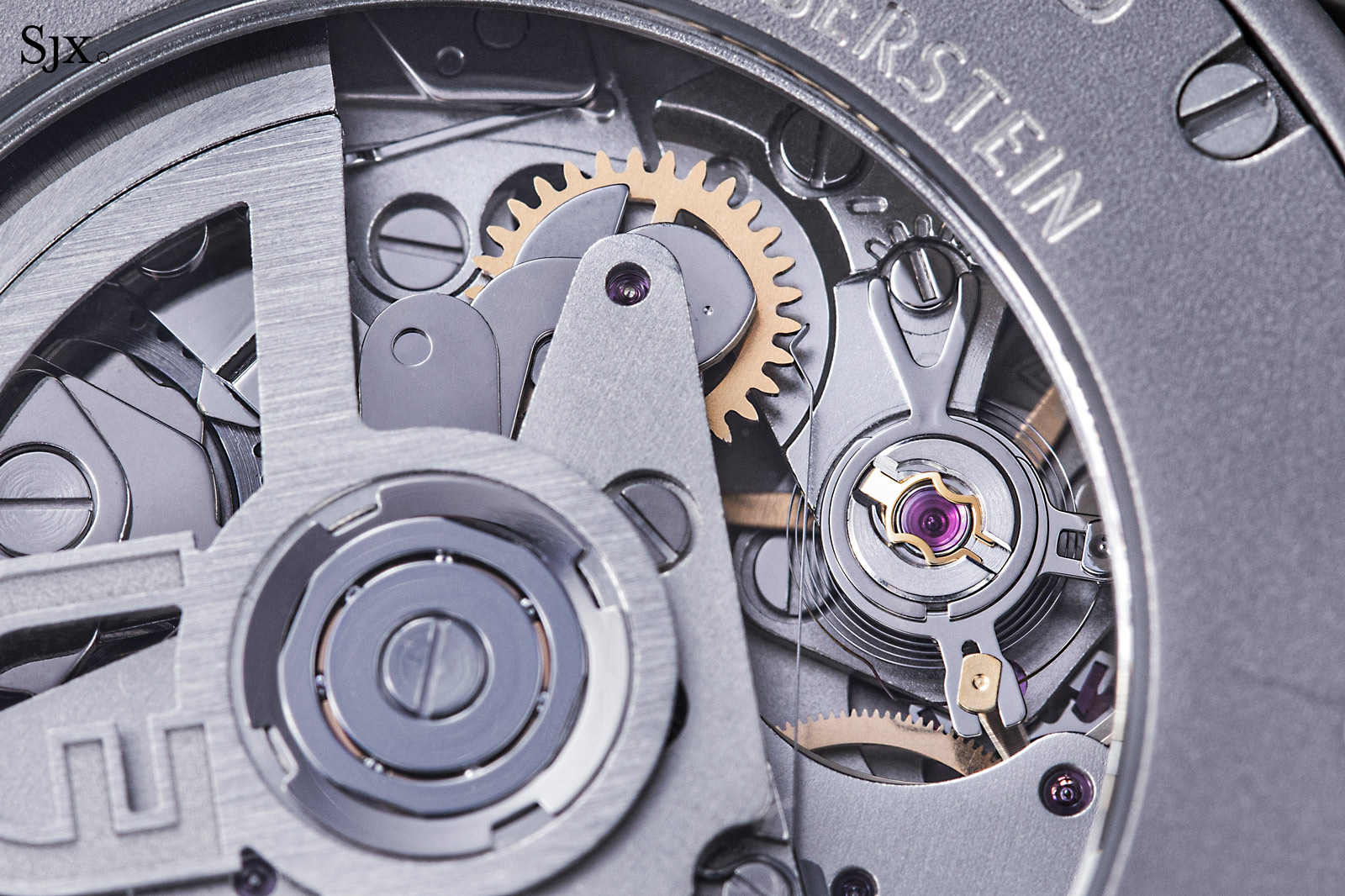 Le Chrono is a fun watch, but designed by someone with a notable history in contemporary watchmaking, which also makes it special. At the same time, the mono-pusher configuration is novel for an affordable chronograph.

Though it does have a few weakness, like the visible movement and plastic button, Le Chrono is a compelling buy, especially since it is a limited edition of only 178 watches. Features: All three watches in a presentation box along with an NFT digital artwork by Alain Silberstein

With the Excellence Guilloché Main.