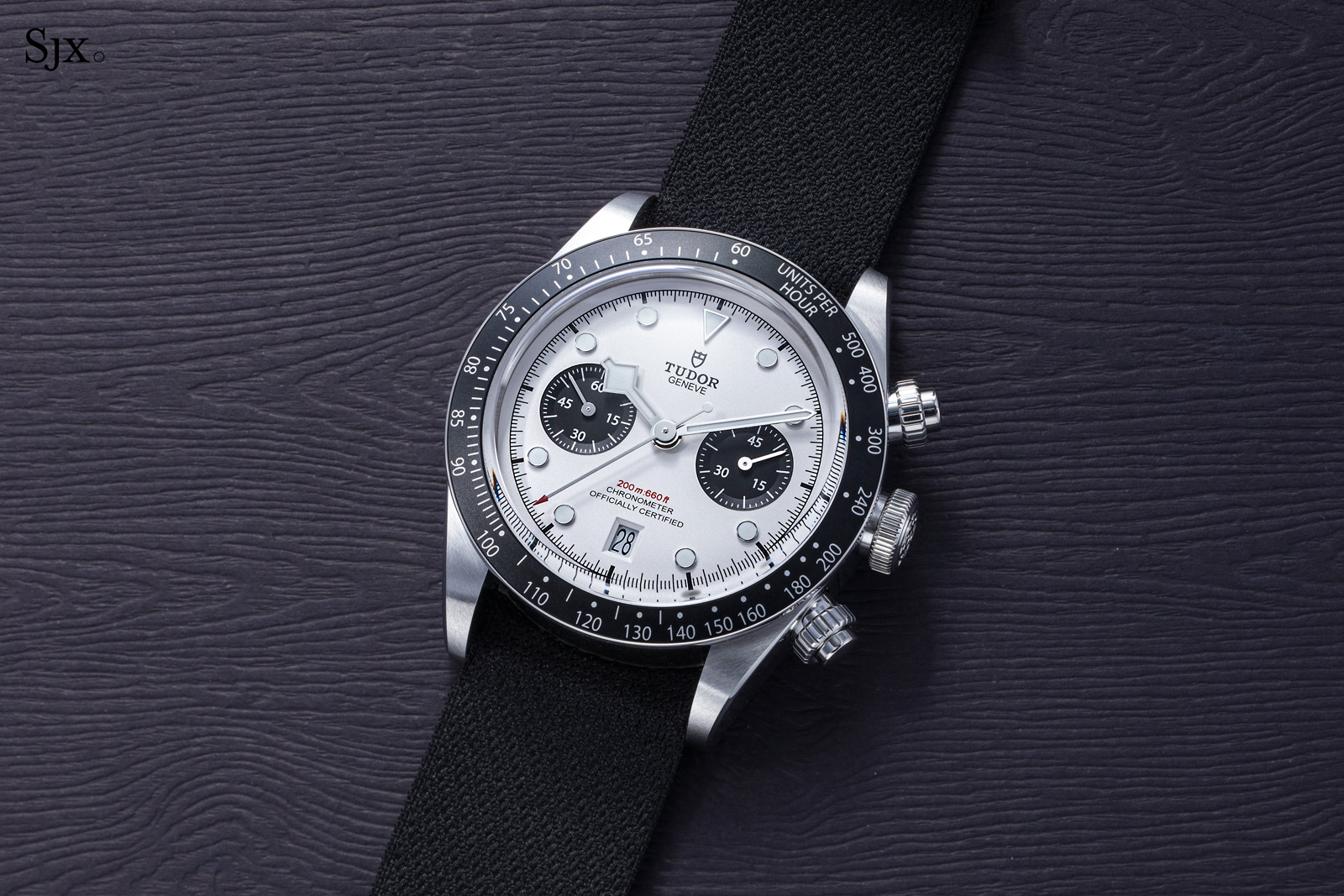 Tudor was founded in 1946 expressly to offer good value, specifically, its founder Hans Wilsdorf (who’s better known to establish Rolex) wanted Tudor watches to offer the trademark dependability of its bigger brother, but at a more accessible price. Seventy-five years later that remains true, with watches like the Black Bay 58 being amongst the best dive watches in its price segment.

When I covered the Tudor Black Bay Chrono “Panda” at its launch earlier in the year, I wrote it is “likely the best-value sports chronograph one can find under US$5,000”. So I naturally jumped at the opportunity to test drive the watch for a week. 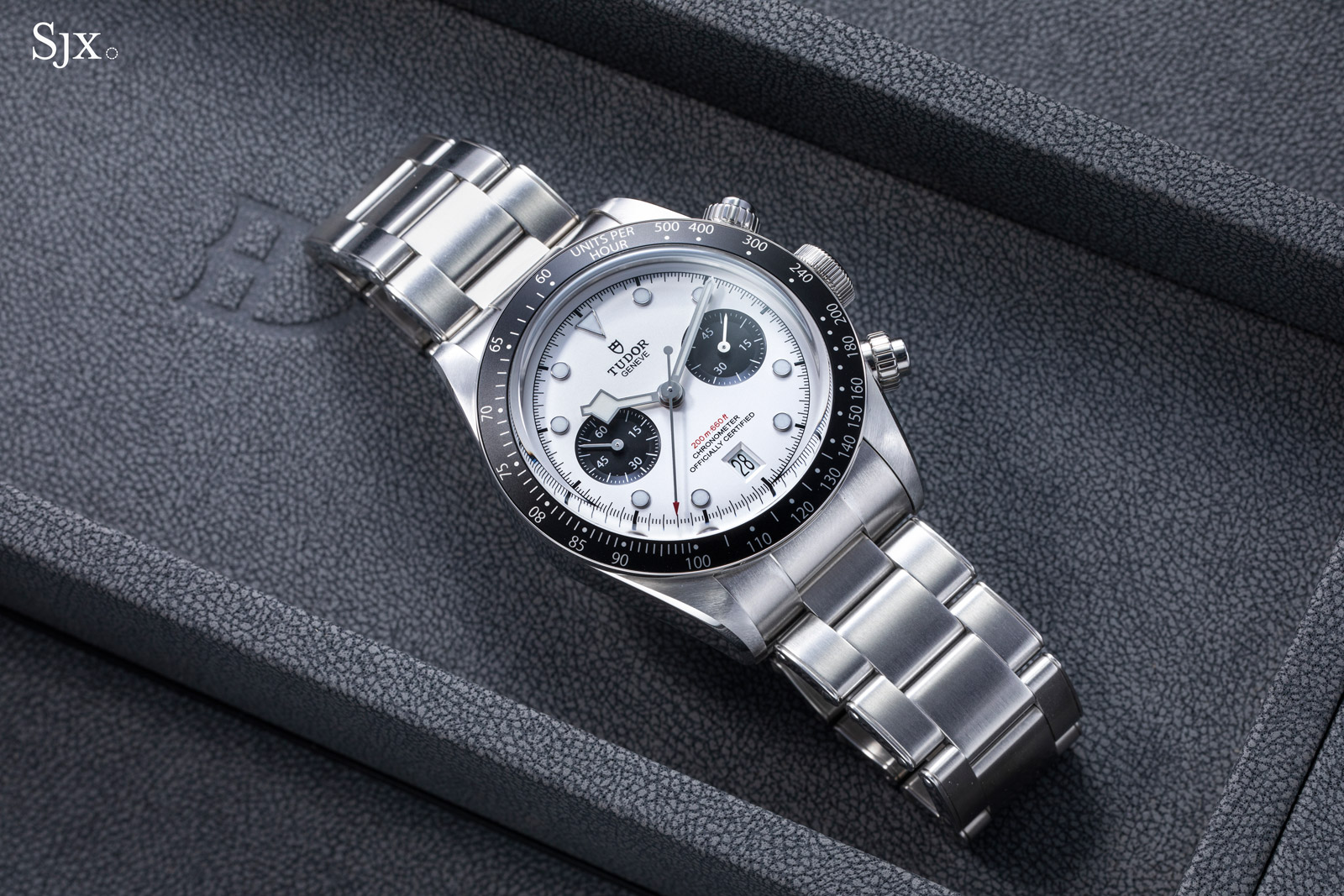 The Black Bay Chrono “Panda” is, on its face, a more accessible alternative to the Rolex Daytona, now virtually impossible to get at retail. The similarities between the two are obvious: a “Panda” dial with one line of red text, screw-down pushers, and a black tachymetre bezel.

Yet to simply pigeonhole the Black Bay Chrono “Panda” as a more affordable Daytona would do it a disservice. The Black Bay Chrono possesses enough character to stand on its own. It’s instantly recognisable as a Tudor with the signature “snowflake” hands matched with round indices. 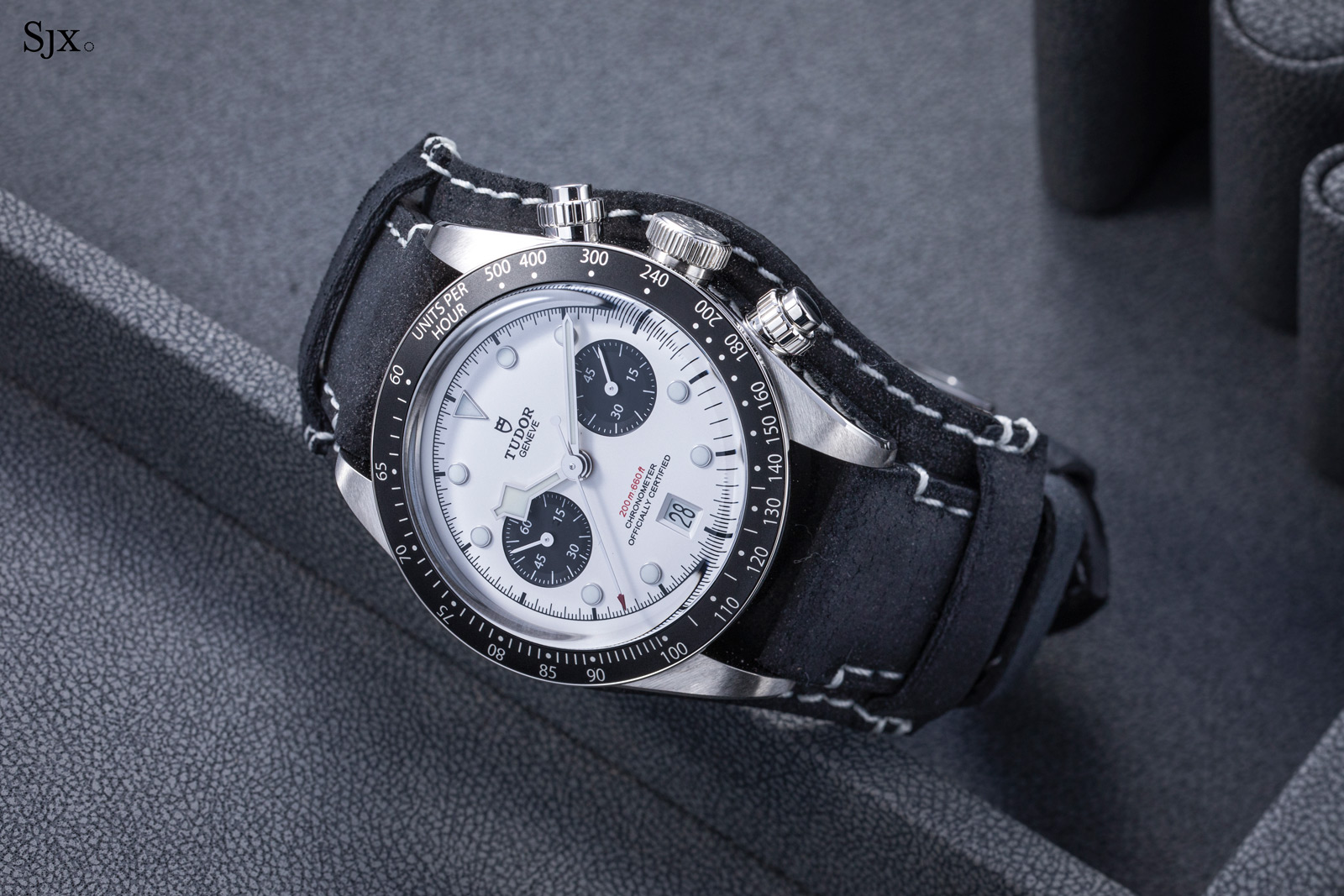 Though the new Black Bay Chrono is near identical visually to the first-generation model, it has been refined with a slightly thinner case.

Nevertheless, the watch is still relatively thick on the wrist, slightly beefier than the Breitling Premier B01 which uses the same base movement (Breitling supplies the movement to Tudor). Given that Breitling recently introduced a manual-wind version of the movement, I hope a manual-wind Black Bay Chrono is in the works. That will allow for a slimmer case which will no doubt create a more retro design. 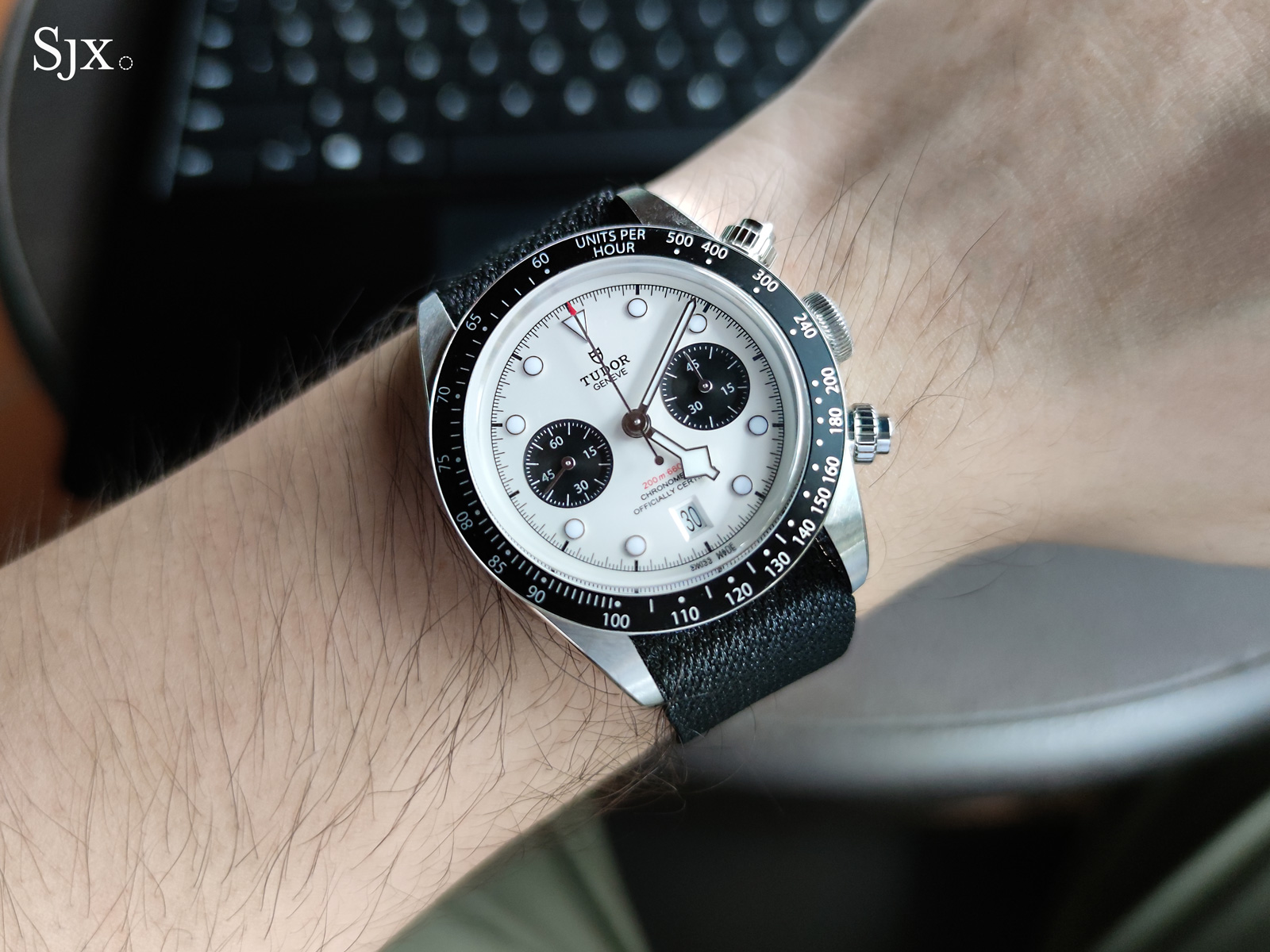 The Black Bay Chrono is available in two guises, each the inverse of the other in colour. When I first saw images of the watch, I preferred the “Reverse Panda”, which is a black dial with white registers, over the “Panda” which has black registers on white.

After a week with the “Panda”, my initial opinion has not changed. While the white dial is eminently striking, the hands blend into the dial, which impacts the legibility at times. I test-drove the watch on the fabric NATO-style strap, which impressed me with its quality. Made by an old-school French mill, Tudor’s fabric straps are amongst some of the best in the industry. The strap was robust but comfortable, and importantly, the finishing on its metal fixtures – often an afterthought – is top-notch.

Nevertheless, if I were buying one, I would opt for the steel bracelet. The bracelet best complements the sporty look of the watch, and is well worth the small extra cost.

As is typical of most of Tudor’s watches, the Black Bay Chrono “Panda” is a terrific value proposition. The build quality is best in class, and the movement is perhaps the most sophisticated in the sub-US$5,000 category. But above all, the “Panda” dials are striking, while retaining all the design elements that we have come to love from Tudor. What’s not to like?

The Black Bay Chrono “Panda” has a white opaline dial with contrasting black sub-dials. Compared with the first-generation Black Bay Chrono that had a single-colour dial, the “Panda” aesthetic is more arresting. The juxtaposition of the colours endows the watch with a retro sportiness that calls to mind the famous “Paul Newman” Daytona. 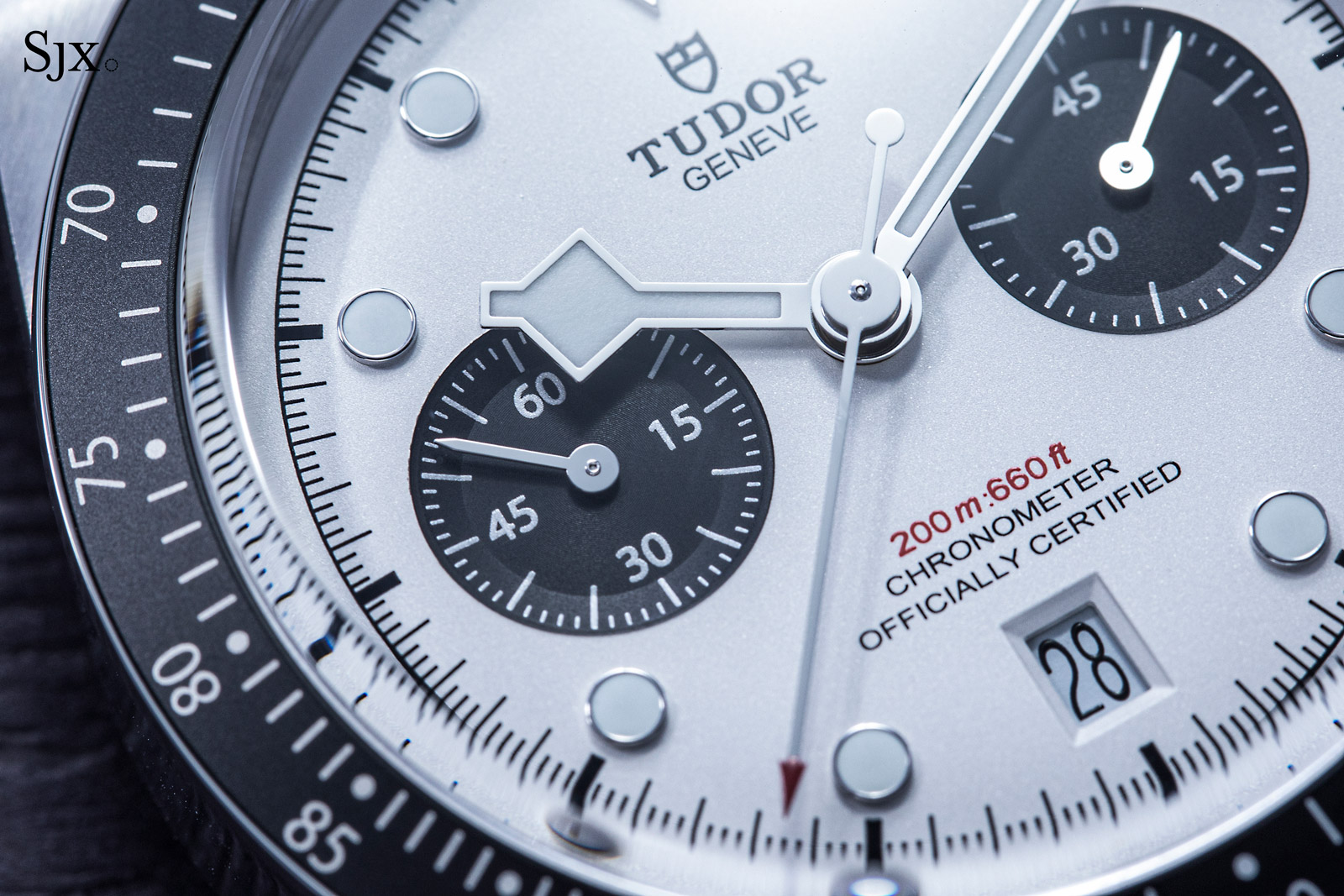 Up close, it is apparent that the dial is very well done. It has a fine, granular texture that provides some visual interest, while retaining a matte finish that reinforces the utilitarian nature of the design. 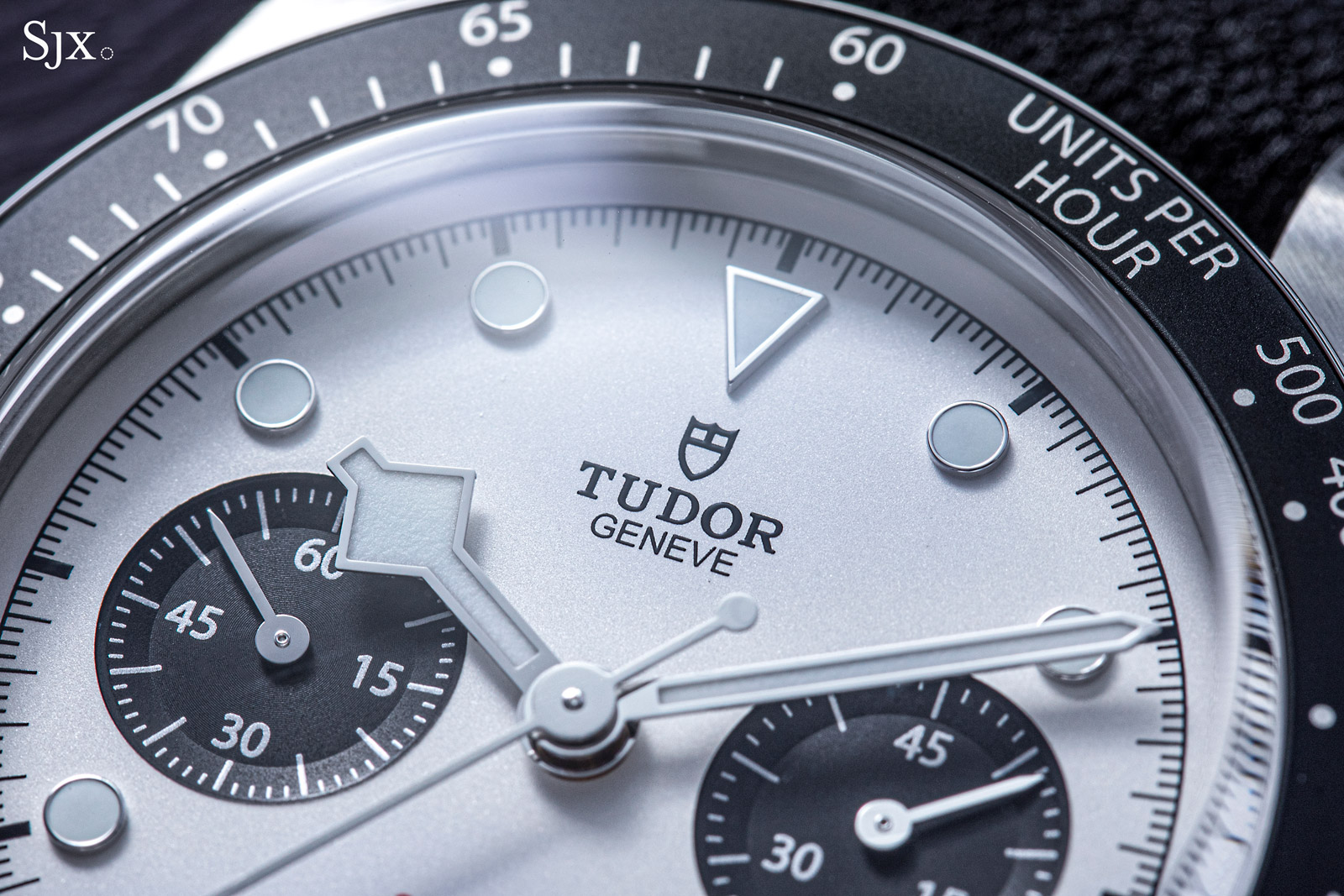 Secondly, the combination of the recessed sub-dials, applied indices, and sunken date window gives the dial a greater sense of depth.

In addition, the text on the dial is sharply printed, with the depth rating in red – a design element appropriated from vintage dive watches – that’s match with a dash of red on the tip of the central Central seconds hand.

While the red depth rating may be theoretically incongruous given the tachymeter scale that indicates this is an auto-racing chronograph, the red accents provide a pop of colour to the otherwise monochromatic dial. 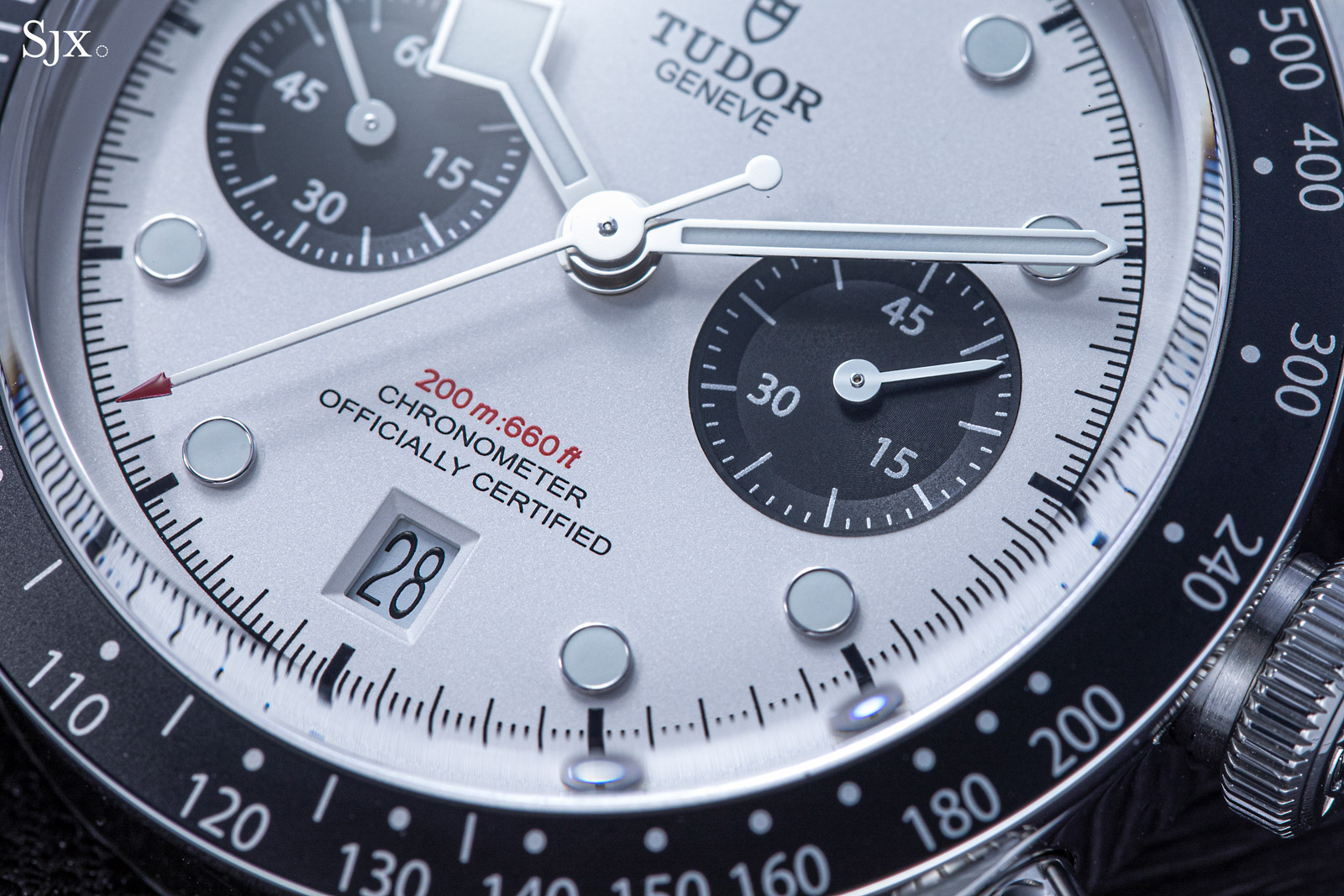 Being a Black Bay, the watch naturally features the signature snowflake hands taken from Tudor’s vintage dive watches, though the hands have been slimmed down.

The design also possesses several other vintage-inspired touches, such as the domed sapphire crystal that evokes the acrylic crystals found on vintage Tudor chronographs. And the stainless steel bezel insert found on the original Black Bay Chrono has also been replaced by one in black aluminium, which reinforces the retro-racing feel of the watch. While thinner, the case preserves the same finishing found on the first-generation model, which was well-finished for the price. Satin-brushed at the top and polished on the sides – highlighted by a gleaming, chamfered edge along the flanks – the case feels both refined and sturdy.

Like its predecessors (and the Daytona), the Black Bay Chrono “Panda” has screw-down crown and chronograph pushers. Slightly inconvenient when using the chronograph, the screw-down pushers give the watch a more robust feel, though they are not strictly necessary for water resistance.

And in a nod to vintage Tudor chronographs, the screws of the pushers are fluted, while the crown is signed with the brand’s retro rose logo. Although the look has been gently refreshed, the watch remains powered by the MT5813, which is the Breitling Calibre 01 that has been modified by Tudor to include a free-sprung, adjustable mass balance wheel and a silicon hairspring.

Equipped with a vertical clutch and a column wheel, the MT5813 is an integrated chronograph that features an impressive three days of power reserve and is also COSC-certified. It is likely the highest-spec chronograph movement in the Black Bay Chrono’s price segment, and the biggest contributing factor to its value proposition.

Instead, it’s a sharply executed sports chronograph that is terrific value for money. Retro in style with an on-trend dial, the Black Bay Chrono “Panda” is a winner.

Importantly, the Black Bay Chrono “Panda” is accessible in both availability as well as price, making it a great pickup for enthusiasts on a budget. And the high-spec movement means this is a great entry into the world of mechanical chronographs. 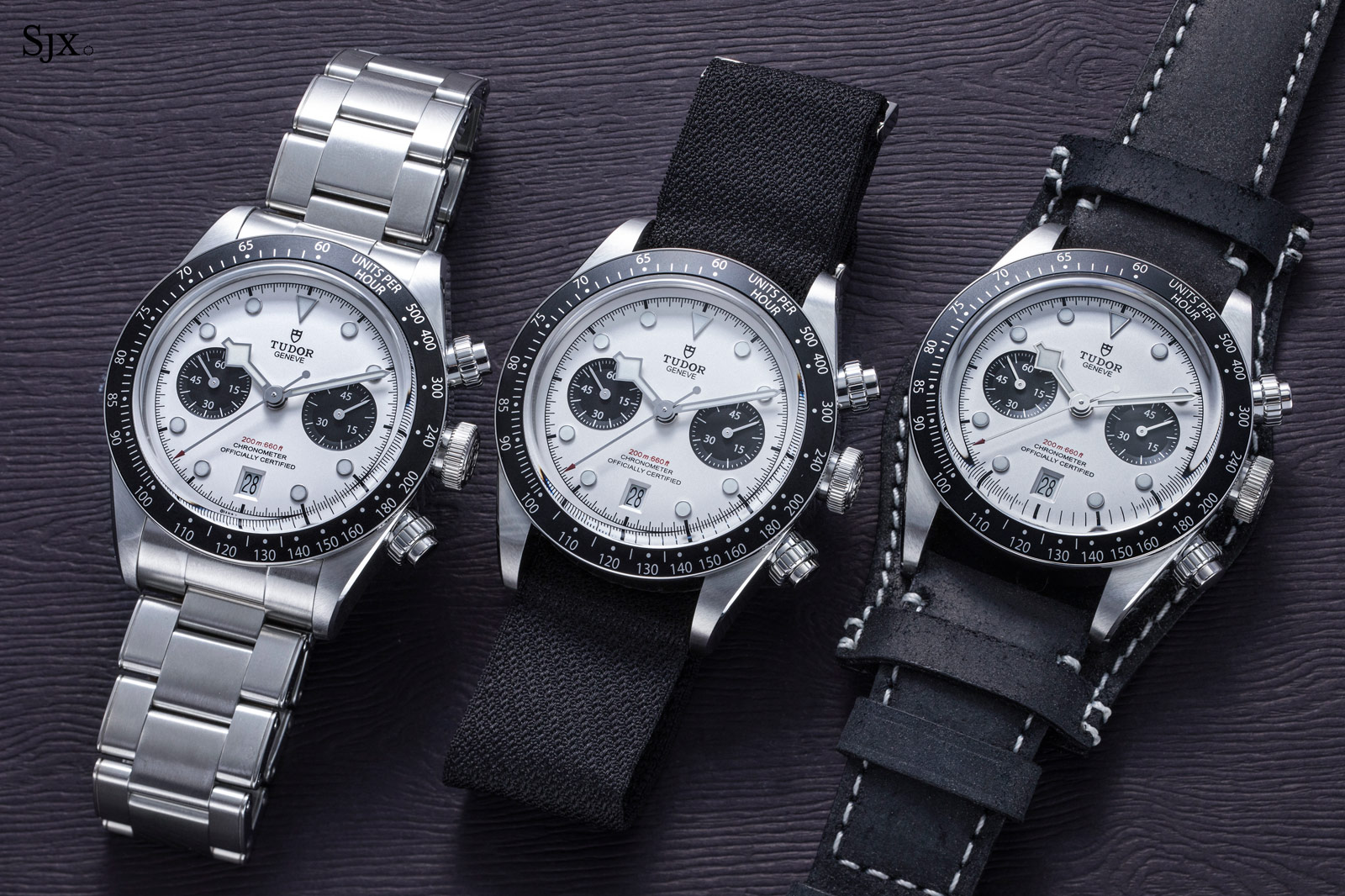 Alternative sports chronographs around the same price point include the Sinn R500 and the recently released TAG Heuer Carrera Chronograph. Compared to the Sinn (which is powered by an ETA 7750), the Black Bay Chrono has the superior movement, as well as a better-finished case and dial.

And although the Heuer 02 calibre in the Carrera Chronograph has similar features, the Black Bay Chrono features a more striking aesthetic that best conveys a retro-racing feel, along with a case that is noticeably superior in quality.

The Black Bay Chrono “Panda” possesses both style and substance at a very compelling price point. Likely the best in its price segment, the watch is an easy recommendation to anyone looking for an affordable sports chronograph. 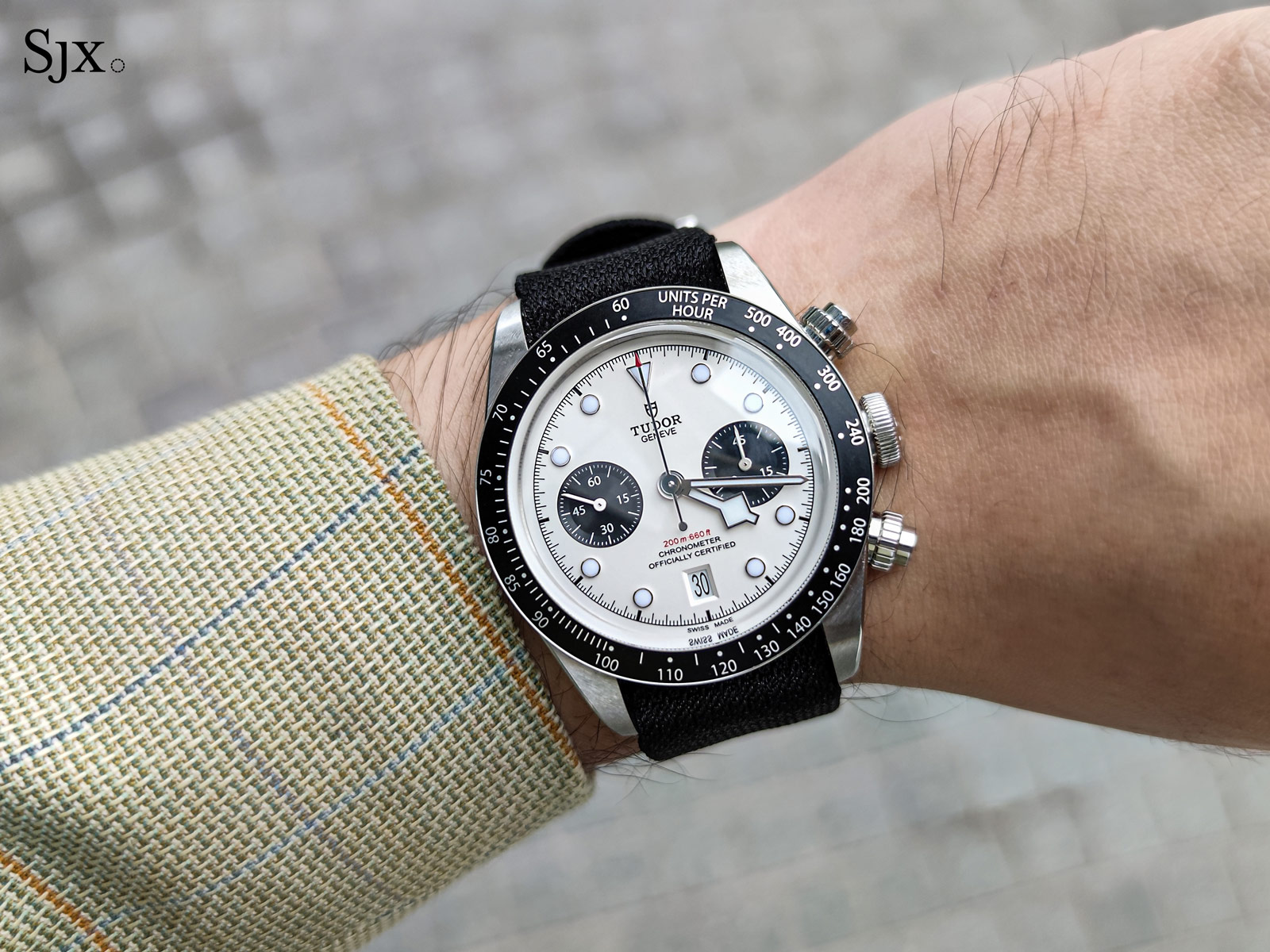 The Black Bay matures into a sleeker watch with a steel bezel and date.