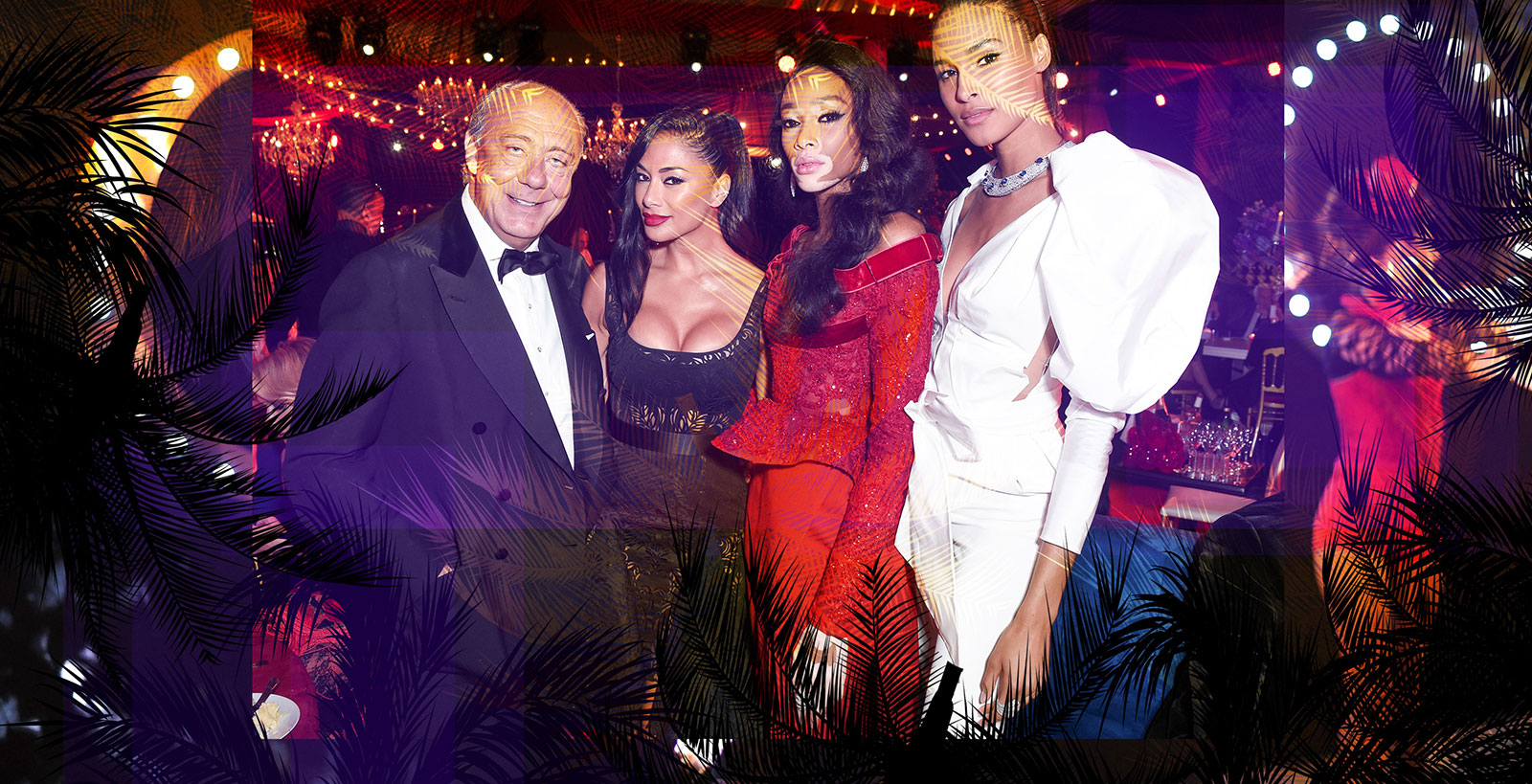 Swiss jeweller De Grisogono, which in its prime was one of the most extravagant brands on the planet, has just filed for bankruptcy in Geneva, as a result of Luanda Leaks, the financial scandal that has engulfed Isabel dos Santos, the daughter of Angola’s former president, reports Swiss newspapers Tribune de Geneve and Le Temps.

Luanda Leaks, a trove of leaked documents published by investigative news organisation ICIJ, revealed Angolan state funds were allegedly channeled to Ms dos Santos, helping make her the richest woman in Africa. Even before the leaked documents, Ms dos Santos and her family were already under pressure from her father’s successor, who has vowed to root out corruption in the oil-rich African nation.

According to the documents, a portion of went to fund De Grisogono, which was acquired by a Angolan investors in 2012. The investment was led by Ms dos Santos’ husband, Sindika Dokolo, but allegedly funded by Sodiam, Angola’s state-owned diamond company. With De Grisogono continuing to lose money since 2012, the brand’s owners had been hawking De Grisogono for some time with no luck, and Luanda Leaks were the final nail in the coffin – the brand declared bankruptcy on Tuesday, January 28, 2020.

The King of Black Diamonds

Founded by Fawaz Gruosi in 1993, De Grisogono was perhaps most famous for its incredibly lavish annual party at the Cannes Film Festival – reputedly costing as much as 3 million francs in some years – that everyone who was anyone attended.

Once synonymous with its liberal use of black diamonds – before De Grisogono black diamonds were unwanted – the brand exemplified the luxury boom of the early 2000s. But despite being larger than life, De Grisogono was a small player in the high-end jewellery business, with only about 100 million francs of annual revenue at its peak, about half of which came from watches (which included the stylish New Retro). The brand started to founder after the financial crisis of 2008, particularly with Mr Gruosi’s turbocharged expenditure on parties and private jets.

A lifeline arrived in 2012 with the Angolan investors who reportedly paid 100 million Swiss francs for a 75% stake in De Grisogono, leaving Mr Gruosi holding much of the rest. At the time, the rationale behind the acquisition was simple: vertical integration of the business, with diamonds going from mines in Angola to De Grisogono’s boutiques in Geneva and a dozen other cities.

But according to Luanda Leaks, most of the 100 million francs used to fund the takeover and subsequent losses of another 100 million Swiss francs came from Sodiam – much of it borrowed by Sodiam from a bank owned by Ms dos Santos.

Now its bankruptcy leaves 65 employees out of work, as well as unpaid debts of 1.4 million francs suppliers in Switzerland, mainly makers of watch components. 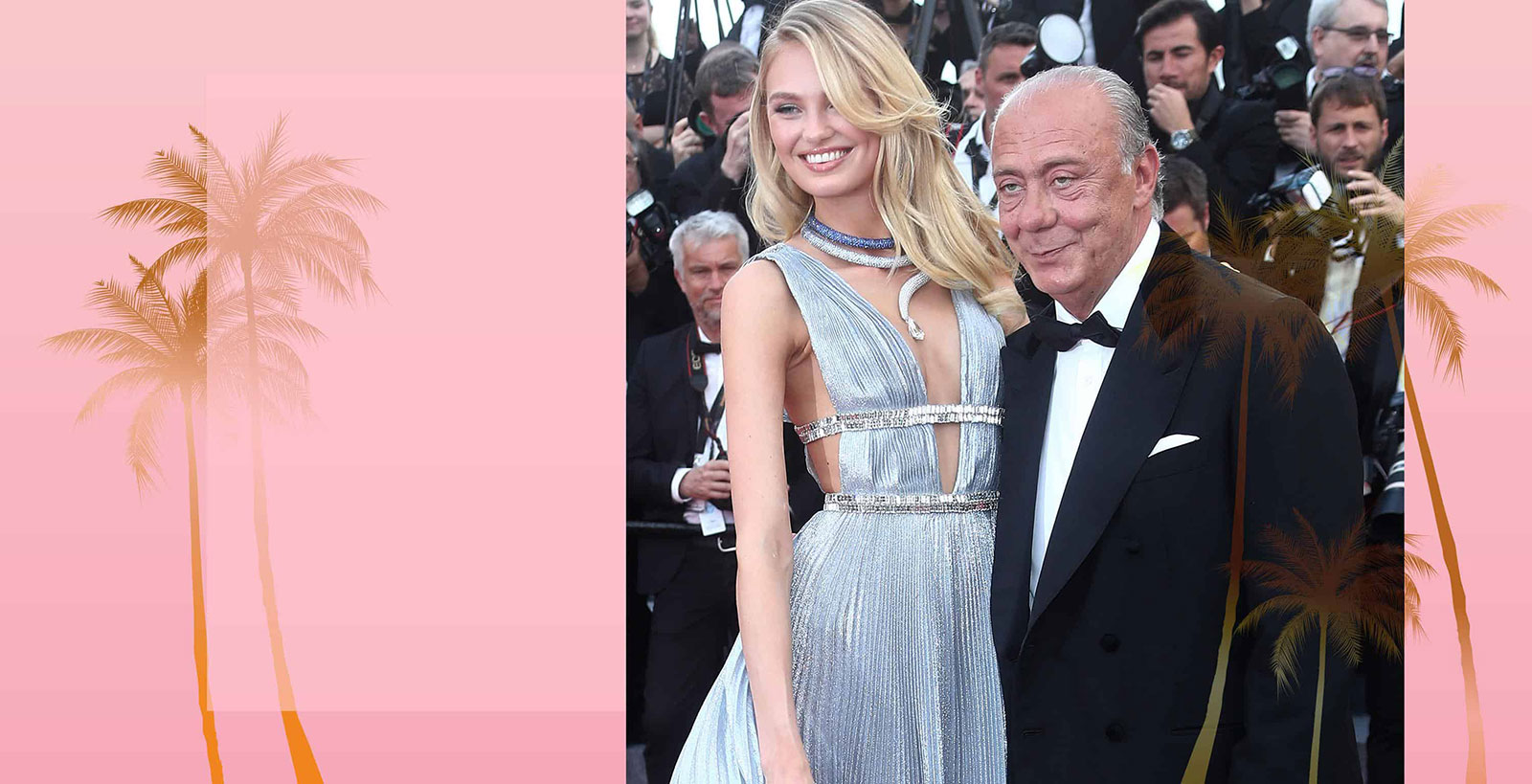 A constant throughout it all – he finally departed the brand in mid 2019 – was the charismatic Fawaz Gruosi, born in Beirut to a Lebanese father and Italian mother, but who grew up in Italy. A famed ladies’ man who started in the jewellery business as a teenager, Mr Gruosi started De Grisogono with two partners, but was able to buy them out in 1996 with the help of Caroline Scheufele – his third wife and also the daughter of Chopard owner Karl Scheufele.

The Chopard connection no doubt aided the development of De Grisogono, but by 2014 Chopard had exited its half of the business by selling it back to Mr Gruosi and his investors, with Mr Gruosi and Ms Scheufele having parted ways some years before. And now it appears it is also the end of De Grisogono itself. 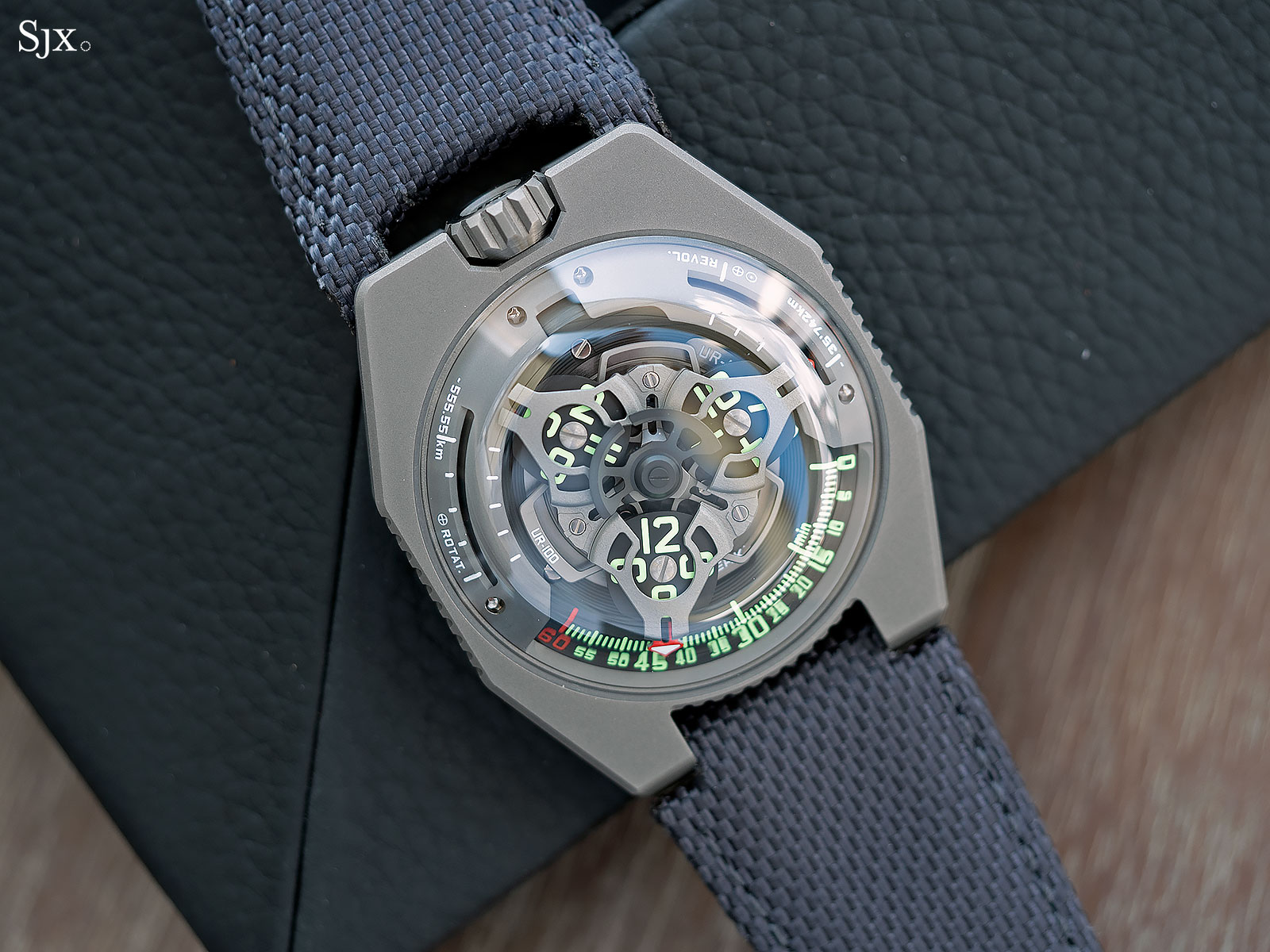 Last year Urwerk launched the UR-100 SpaceTime, a watch that installed the brand’s signature wandering hours satellite display in newly designed watch case. Unsurprisingly the UR-100 SpaceTime became a brisk seller, not only because it is the most affordable model in the catalogue, but also because its case is compact and relatively conventional in shape, making it the most wearable Urwerk watch by far.

And so Urwerk has followed up with the UR-100 Gunmetal, a new variant that arrives just four months after four months after the model was launched. It feels a little bit too soon for another edition, but the Gunmetal is different enough – and the original versions are almost sold out – that it can be forgiven. 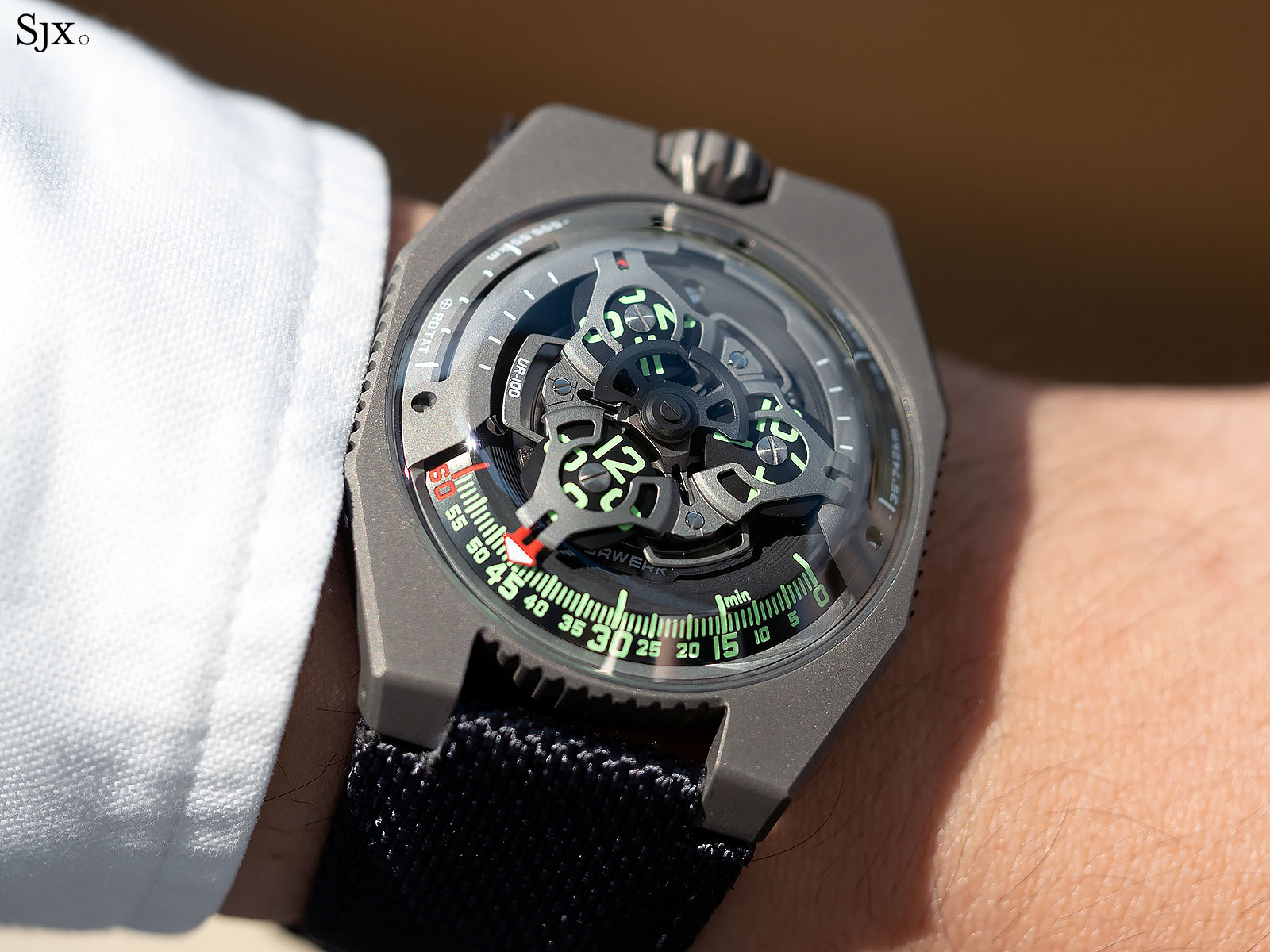 While the case of the new UR-100 remains the same design, the finish is unusual. The material looks like titanium, even up close it resembles titanium, but in the hand it is obviously too heavy to be titanium.

The case is actually steel, which has been sandblasted to give it a smooth, matte finish and then coated with a dark grey coating. That’s a bit of a surprise, because watch cases that look like titanium are almost always titanium. But Urwerk’s rationale for using steel is practical: hard-coated steel is more resistant to scratches than titanium, which is generally quite soft.

The result is watch that has a strong sci-fi military look, like a piece of kit used by the Marines in Aliens, which is very much Urwerk’s original house style so it works well. 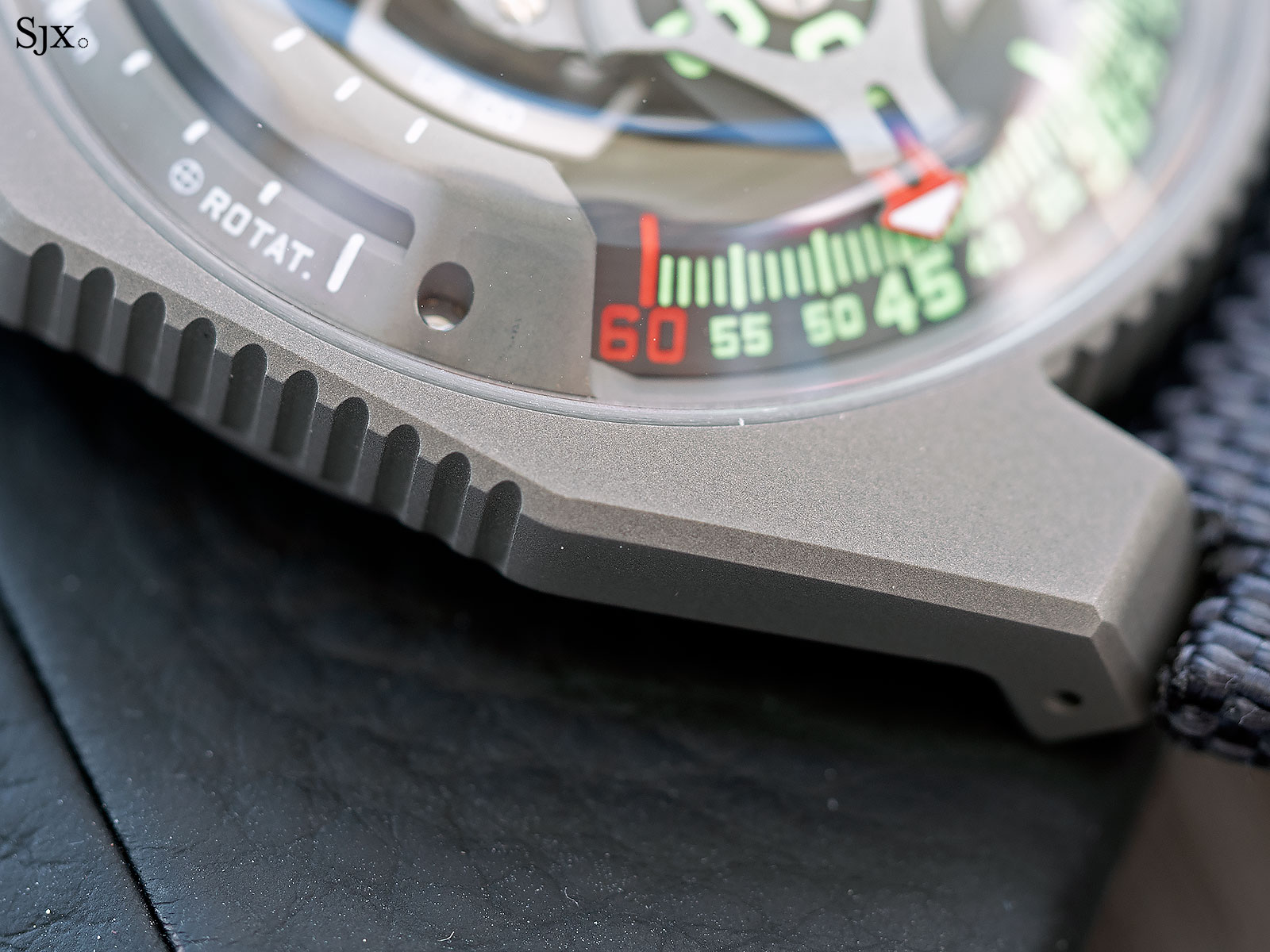 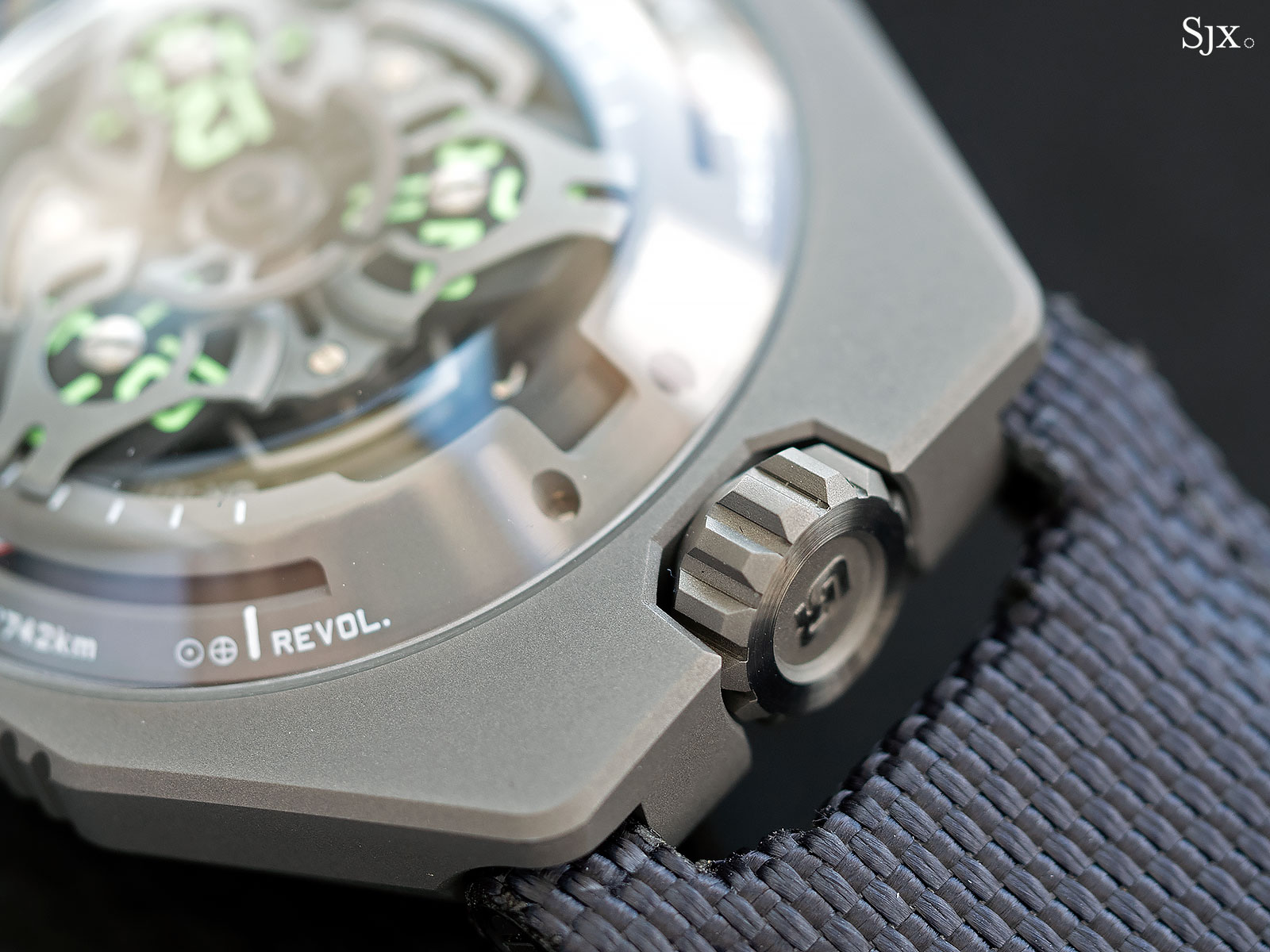 Though the finish is different, the case design is exactly the same. As a result, the only possible drawback of the muted case finish is the loss of the contrasting surfaces found on the original steel version, which had brushed flat surfaces separated by a wide, polished bevel.

The dull, military-esque finish suits the watch better in my opinion, but the brighter finish on the original version looks a bit more luxe.

Mechanically the Gunmetal is identical to the standard UR-100, which also means it is descended from Urwerk’s very first, foundational watches, notably the UR-103, that told the time in almost the same way. 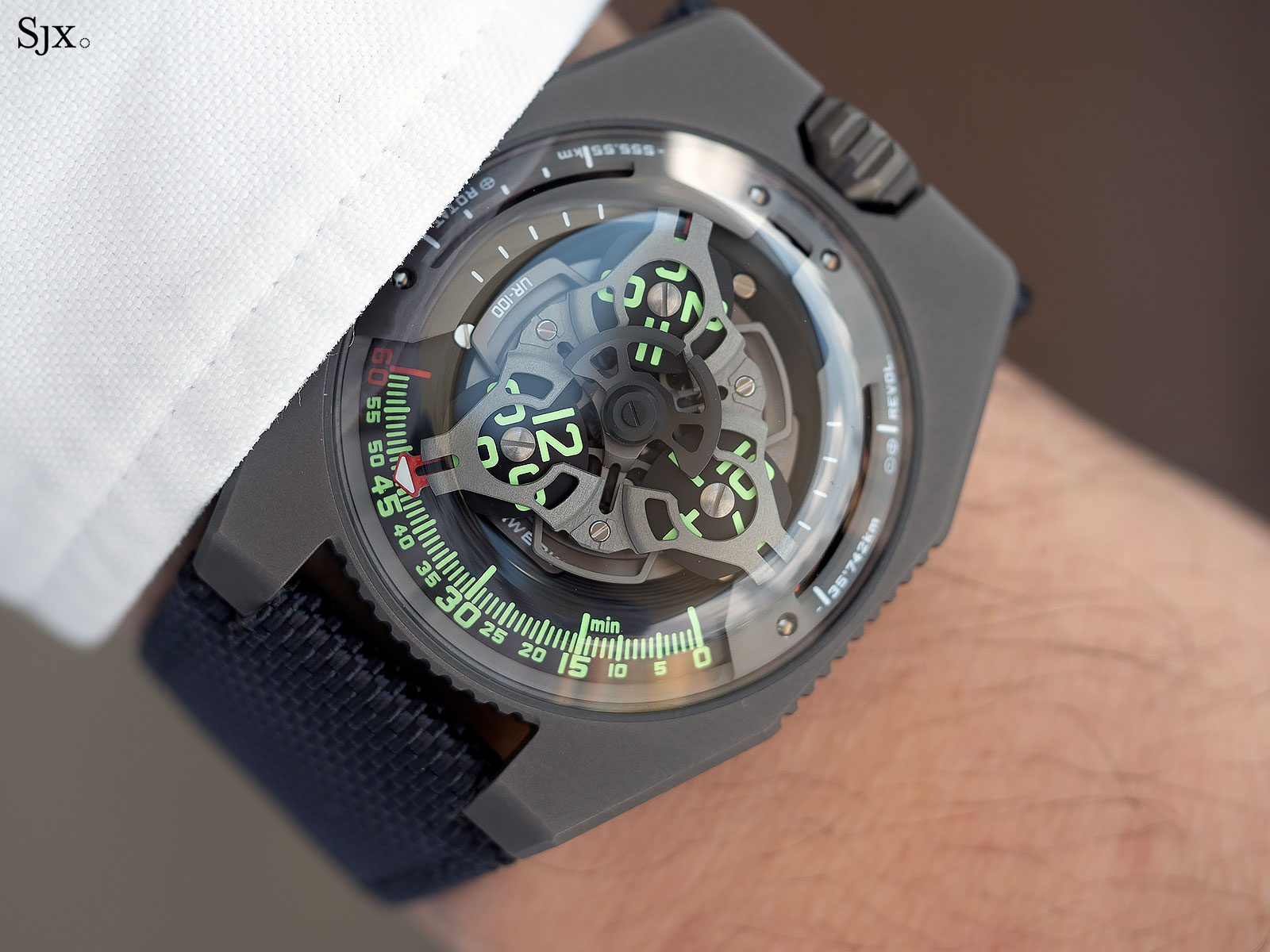 A trio of rotating satellite discs (each with its own minute pointer) form a wandering hours display that shows the current hour on a disc, alongside a red pointer that indicates the minutes. Even though the wandering hours has been an Urwerk mainstay for almost two decades, and also made famous by Audemars Piguet with its Star Wheel, it is different enough that it’s still interesting. 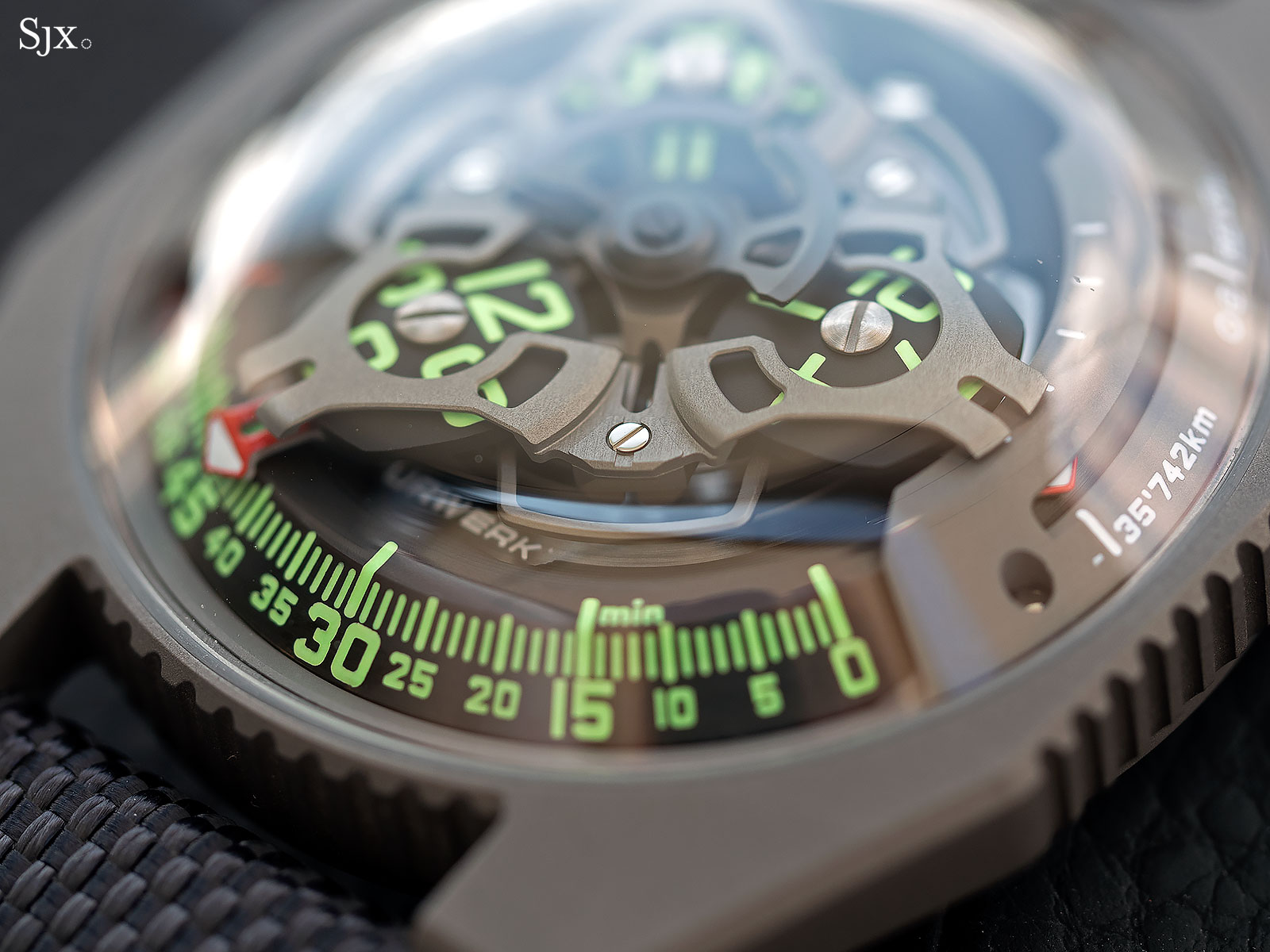 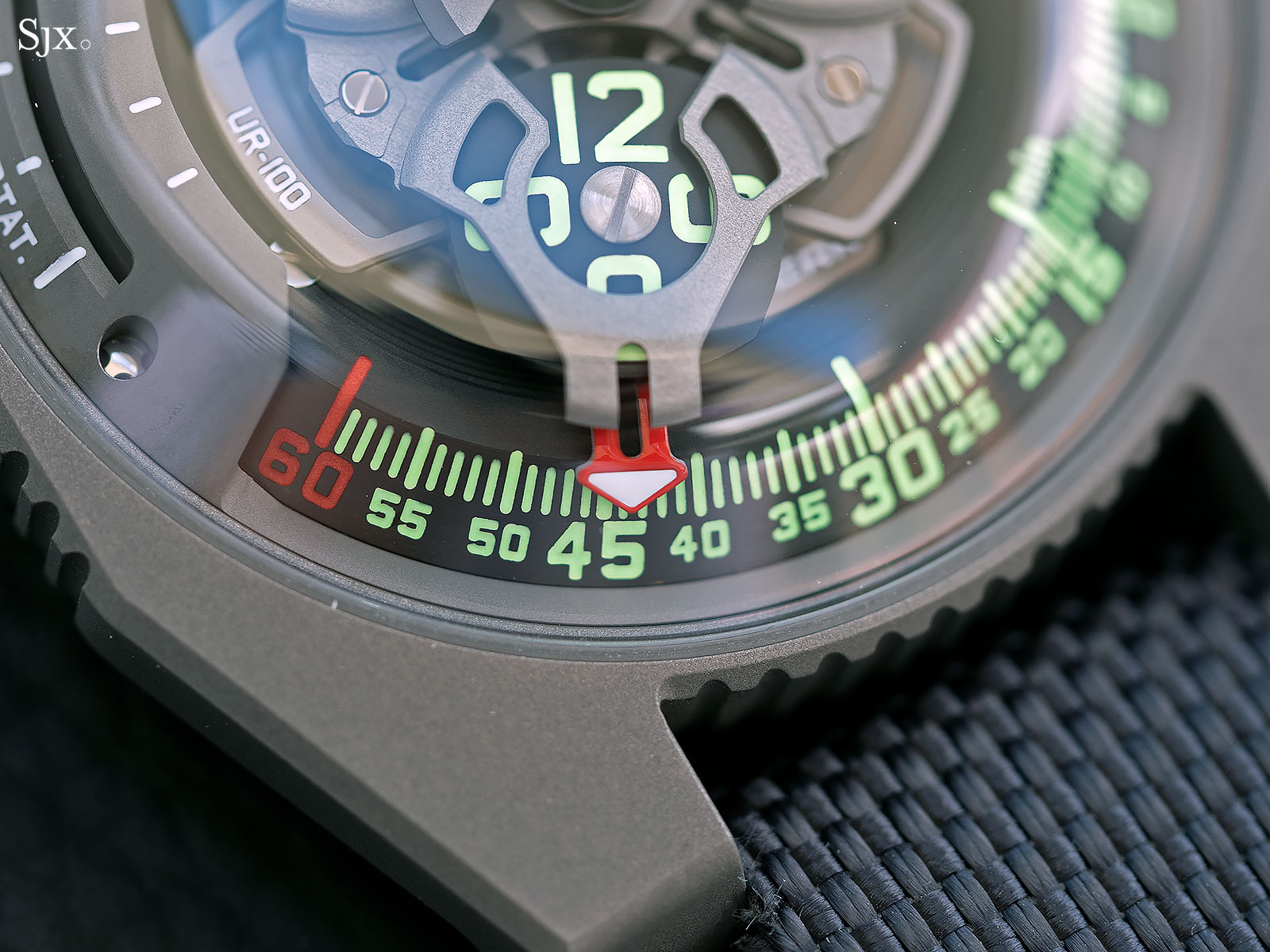 More unusual are the astronomical distance indicators, essentially simplistic displays that repurpose the dormant minute pointer that show cosmic distances travelled over time. The scale at 10 o’clock shows distance travelled by Earth’s rotation on its own axis, measured at the equator, which is 555 km every 20 minutes. And the scale at two indicates the distance travelled by the Earth around the Sun, which is 35,740 km every 20 minutes.

The incorporation of the two distance displays is not mere whimsy; Urwerk cofounder Felix Baumgartner got the idea from a pendulum clock made by Gustave Sandoz, a 19th century French clockmaker. The clock shows the passing of time, but does not display the time, instead showing the distance travelled by a point on the equator as the Earth rotates.

Though interesting philosophically, and also an inventive use of the dormant minute hands, the astronomical indicators don’t add much to the watch. At the same time, they don’t detract from the aesthetics, because the scales are on the periphery of the dial. The case of the UR-100 is the most conventional amongst all Urwerk watches, not just in style but also in construction. The case back is secured by four screws, much like an ordinary watch. Through the sapphire window in the back, the movement is visible. 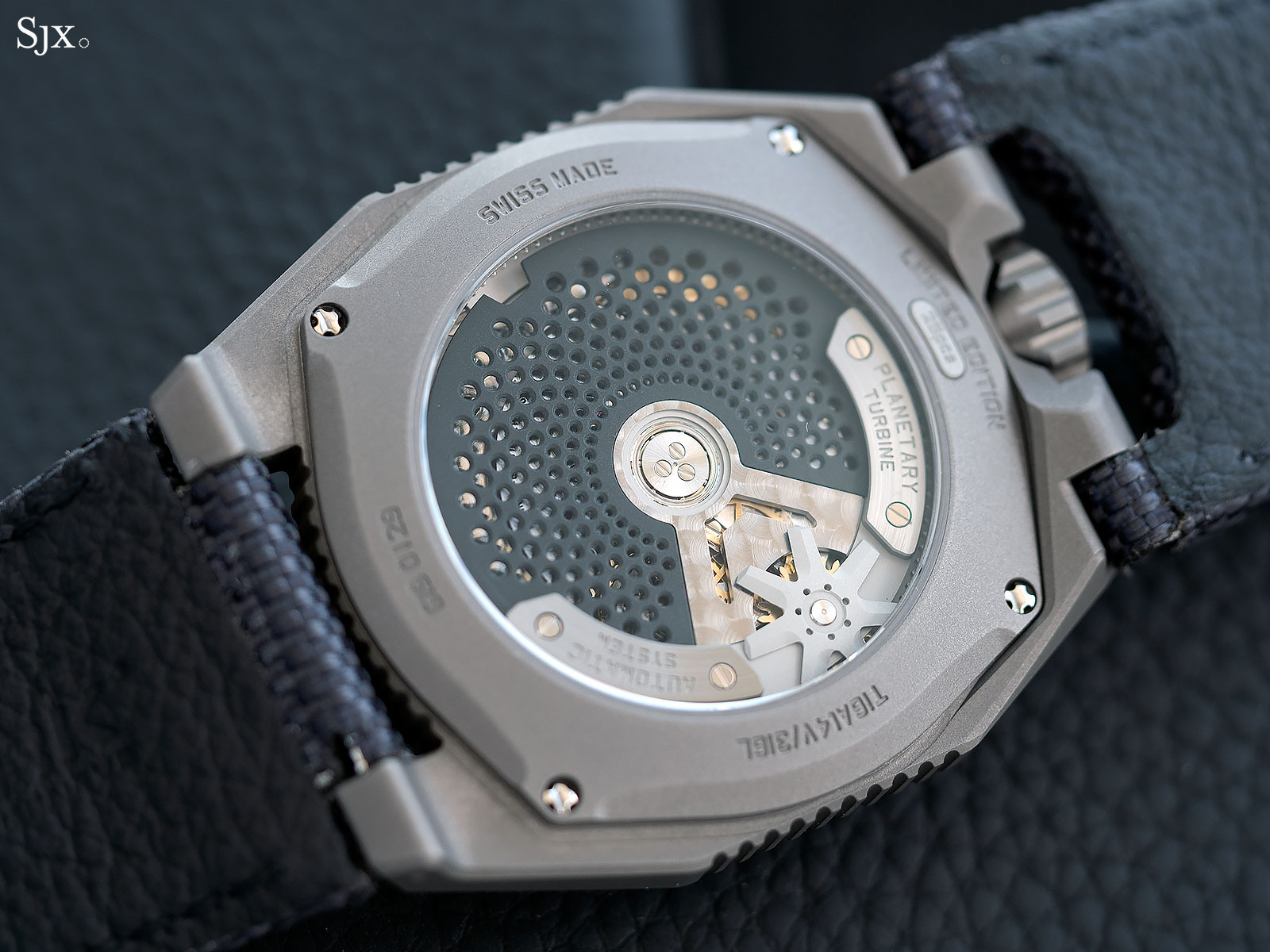 The rotor is a strange-looking perforated disc that is weighted on one side and also equipped with a propeller-shaped wheel. Urwerk refers to the wheel as windfänger, an aggressive-sounding German term that translate into something quite ordinary – “air trap” – because it regulates the swinging of the rotor, preventing it from spinning too freely or too much. Like the astronomical display on the front, the windfänger is probably not necessary, but is interesting nonetheless. 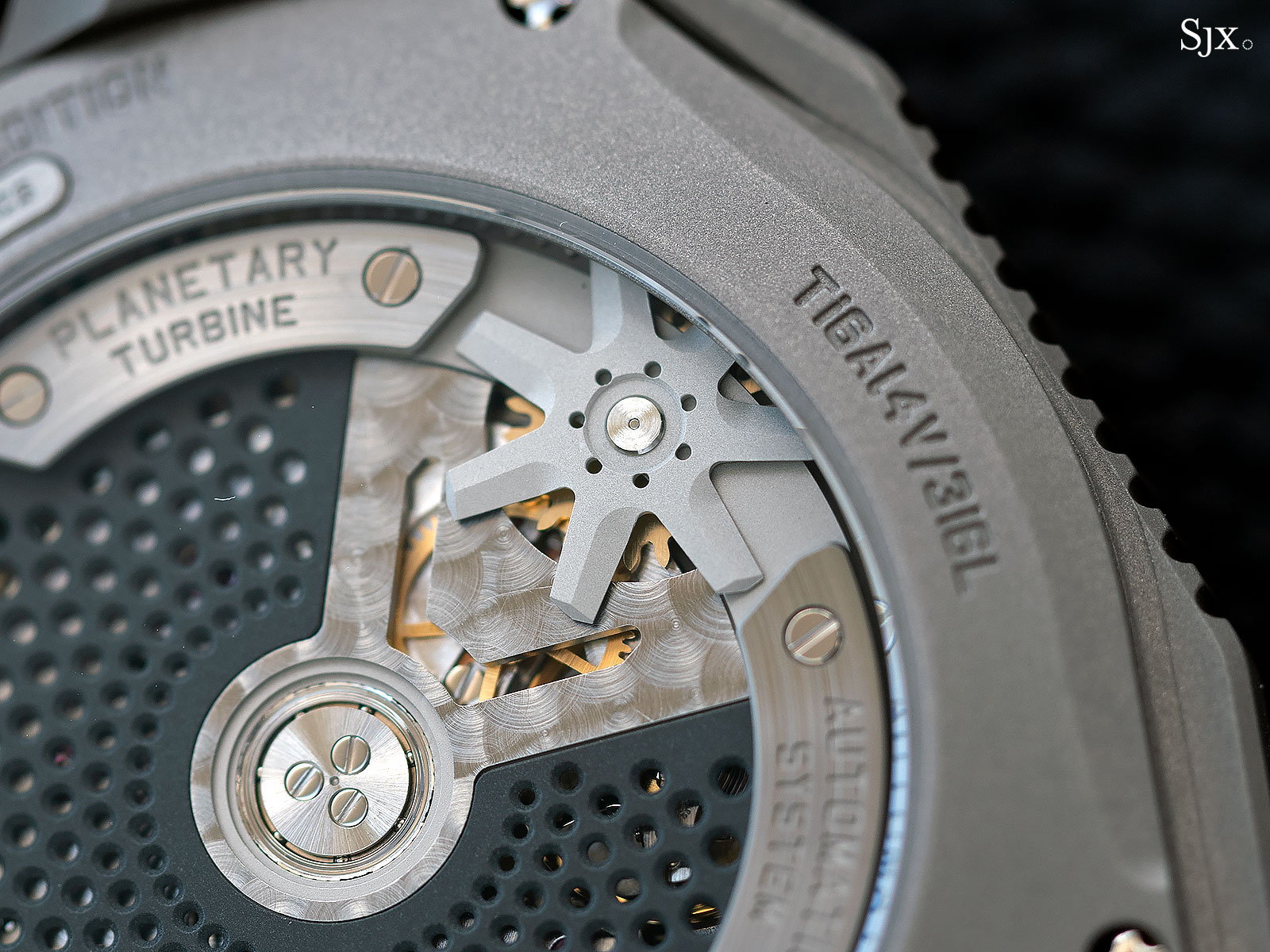 Beneath the elaborate rotor, the movement is a self-winding Zenith Elite, a reliable calibre that powers most of Urwerk’s current models, which has been combined with Urwerk’s proprietary time display module.

The UR-100 in general is one of Urwerk’s best recent products, because it sticks to what Urwerk is good at, the satellite time display. Though the mechanics are not novel, it is still unusual enough to be interesting.

And it does so without being too big or clumsy, or too expensive. While the case is not as elaborate as the usual Urwerk, it is lighter, thinner, and far more wearable, which is an important quality.

Of the variants, the Gunmetal is surely the most interesting and appealing version of the UR-100 so far. And it costs the same as the earlier versions, which makes it a more compelling buy. But that comes with a caveat: Urwerk will surely unveil more variants of the same, which may or may not be cooler.