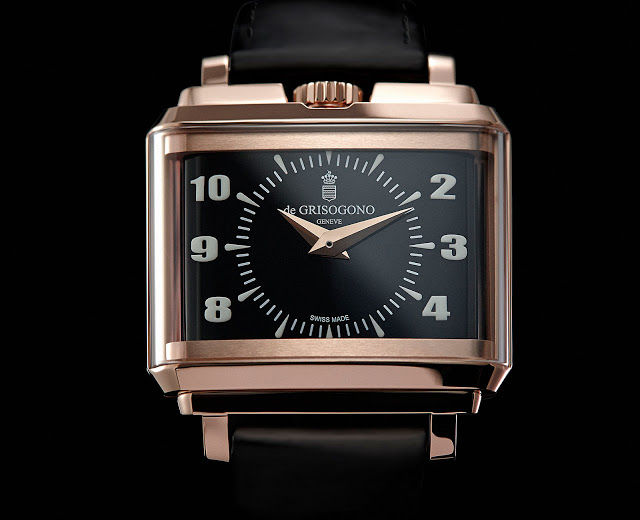 A departure from the flamboyant watches De Grisogono made its name with, the New Retro is inspired by a vintage cigarette case from the 1950s belonging to founder Fawaz Gruosi. With rounded edges and an oblong form, it is also reminiscent of travel clocks from the period. A unique version christened the New Retro Black Stripes has been created for charity auction Only Watch 2015, with four rows of black diamonds hidden on the case back that distinguish it from the ordinary version.

Two identical sapphire crystals with curved ends sit on the front and back of the watch, allowing an unobstructed view of the dial and movement. The crown is at 12 o’clock, leaving the case flanks smooth and linear. Despite its vintage aesthetic the New Retro is thoroughly modern in size, with the rose gold case measuring a large 50mm in diameter, and 40mm from top to bottom. In the late 1990s De Grisogono has made its specialty black diamonds, hence the 20 diamonds on the case back and the moniker “Black Stripes”. They sit on four rows above and below the movement, which is an ETA 2892 finished in black PVD coating and fitted with a rotor open-worked with curlicues. Also known as carbonado, black diamonds were never as fashionable as their white counterparts until Gruosi came along, creating lavish jewellery set entirely with black diamonds. When De Grisogono was riding high in the mid-2000s, black diamonds were all the rage (though the company was overwhelmed by its debt and was rescued in 2012 by investors related to Isabel dos Santos, daughter of Angola’s president).

The New Retro Black Stripes Only Watch will be sold at auction in Geneva on November 7, 2015, alongside 42 other one of a kind timepieces, with proceeds going to a charity that supports research into Duchenne muscular dystrophy.