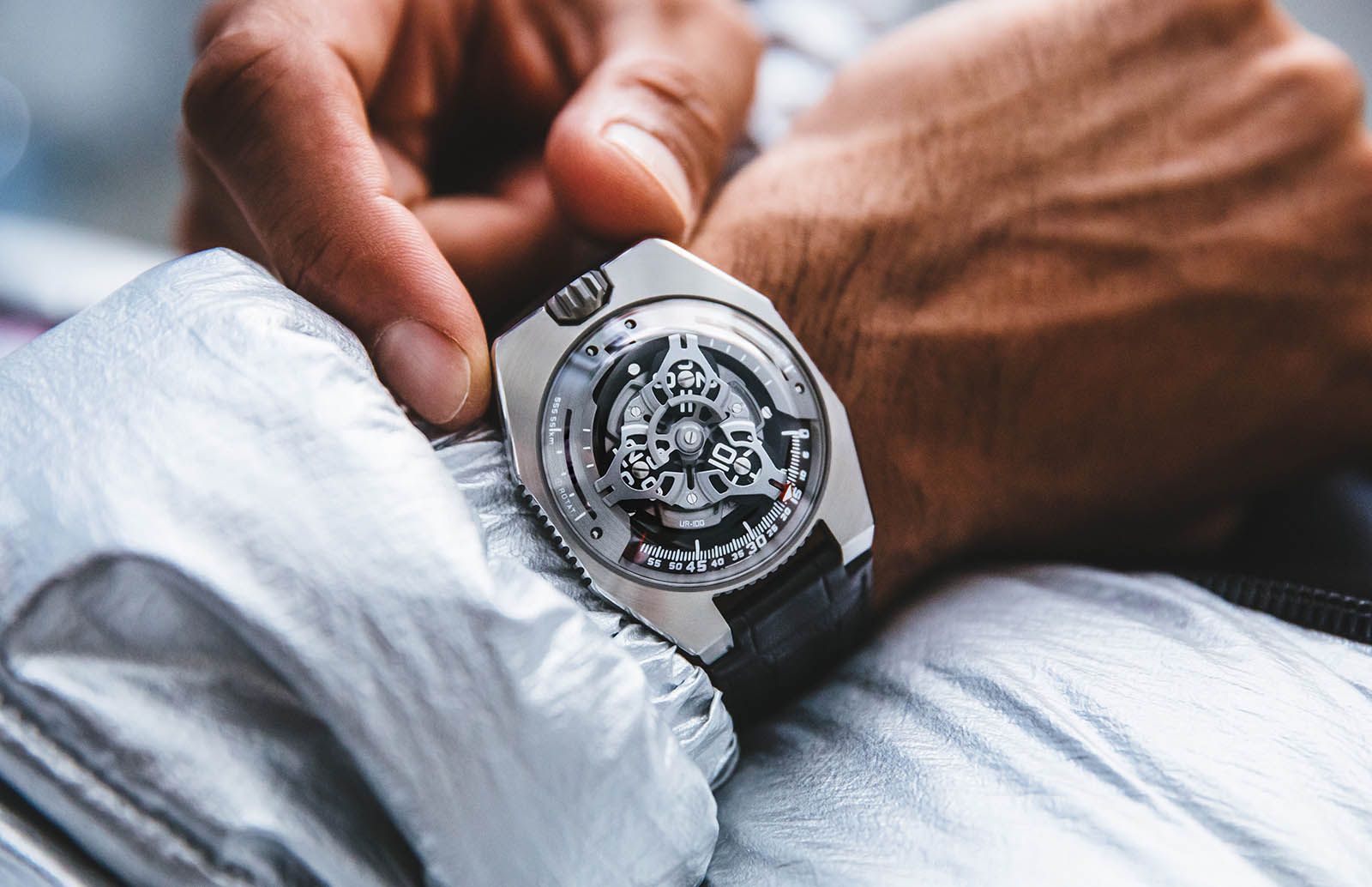 Known for its innovative, avant-garde complications and cases inspired by sci-fi, Urwerk’s latest creation is doubly interesting. The UR-100 SpaceTime takes the astronomical theme even further with two quirky, celestial indicators – and it is also priced as an entry-level model.

The UR-100 utilises the brand’s signature wandering-hours satellite display, where conventional hands are replaced by a semi-circular minute gauge, across which three discs mounted on a carousel sweep successively. It was originally invented in the 17th century for a Vatican City clock, then popularised for wristwatches in the early 1990s by Audemars Piguet with the Star Wheel.

But it was Urwerk that took the wandering hours into the 21st century when it launched at UR-103 in 2003; though it was not the first Urwerk wristwatch, the UR-103 was the watch that put the brand on the map (and the recent UR-105 is a nod to the original). 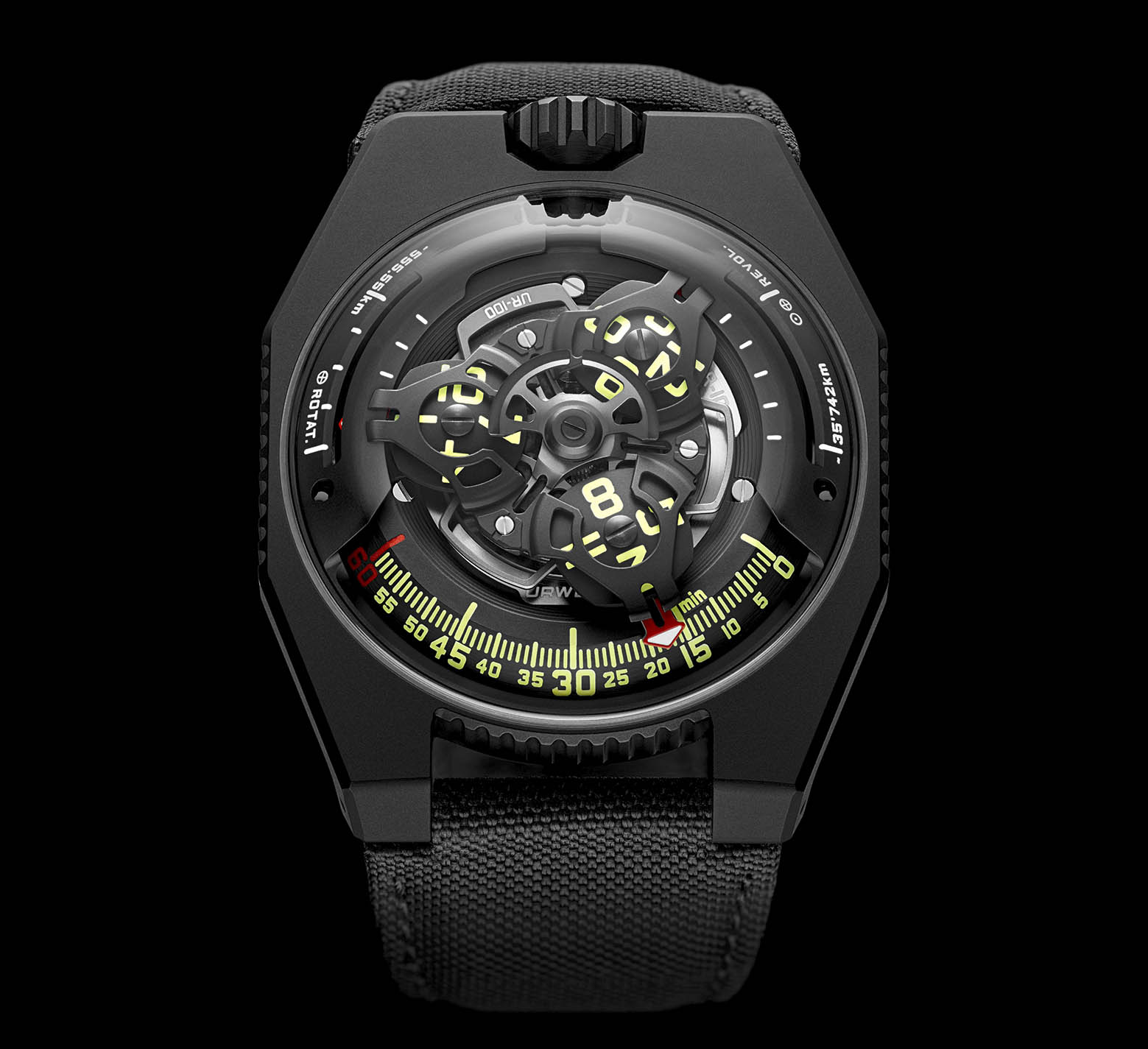 On the UR-100 SpaceTime, the hours wander even further: once the red minute pointer completes 60 minutes (or an hour), it disappears under a bridge and reappears through a cutout at 10 o’clock to indicate the distance travelled from the Earth’s rotation on its own axis, as measured at the equator, or 555km every 20 minutes. Another red pointer at two o’clock measures the distance travelled by the Earth orbiting the Sun, which is 35,740km every 20 minutes.

Both astronomical distance displays, however, are a philosophical exercise rather than mechanical development. While theoretically intriguing, both displays rely on the same hour-satellite display, with only the graduated scale on the bridge to indicate distance. The length of the graduation on the bridge is 20 minutes, which is why both measurements are scaled for 20 minutes. 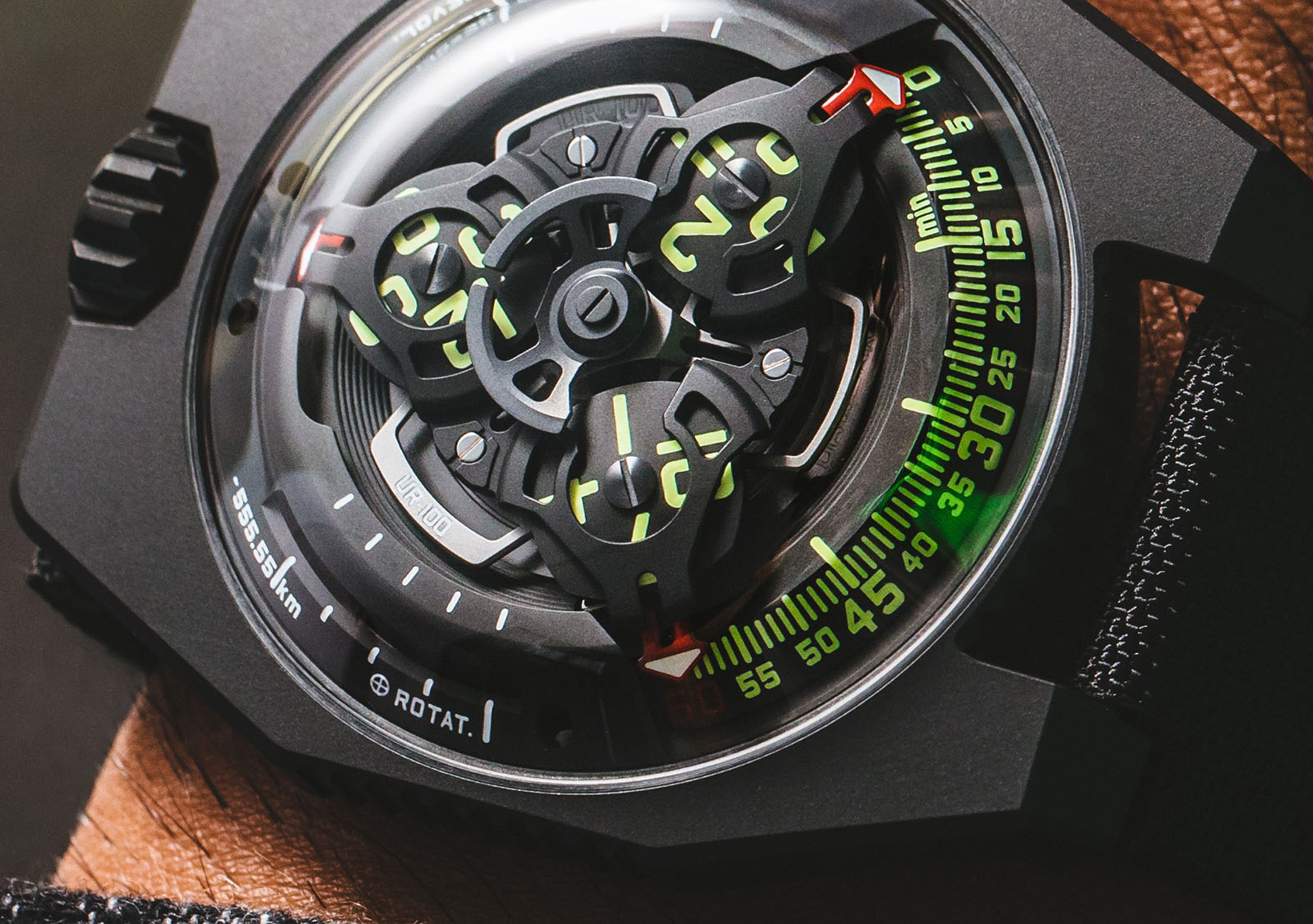 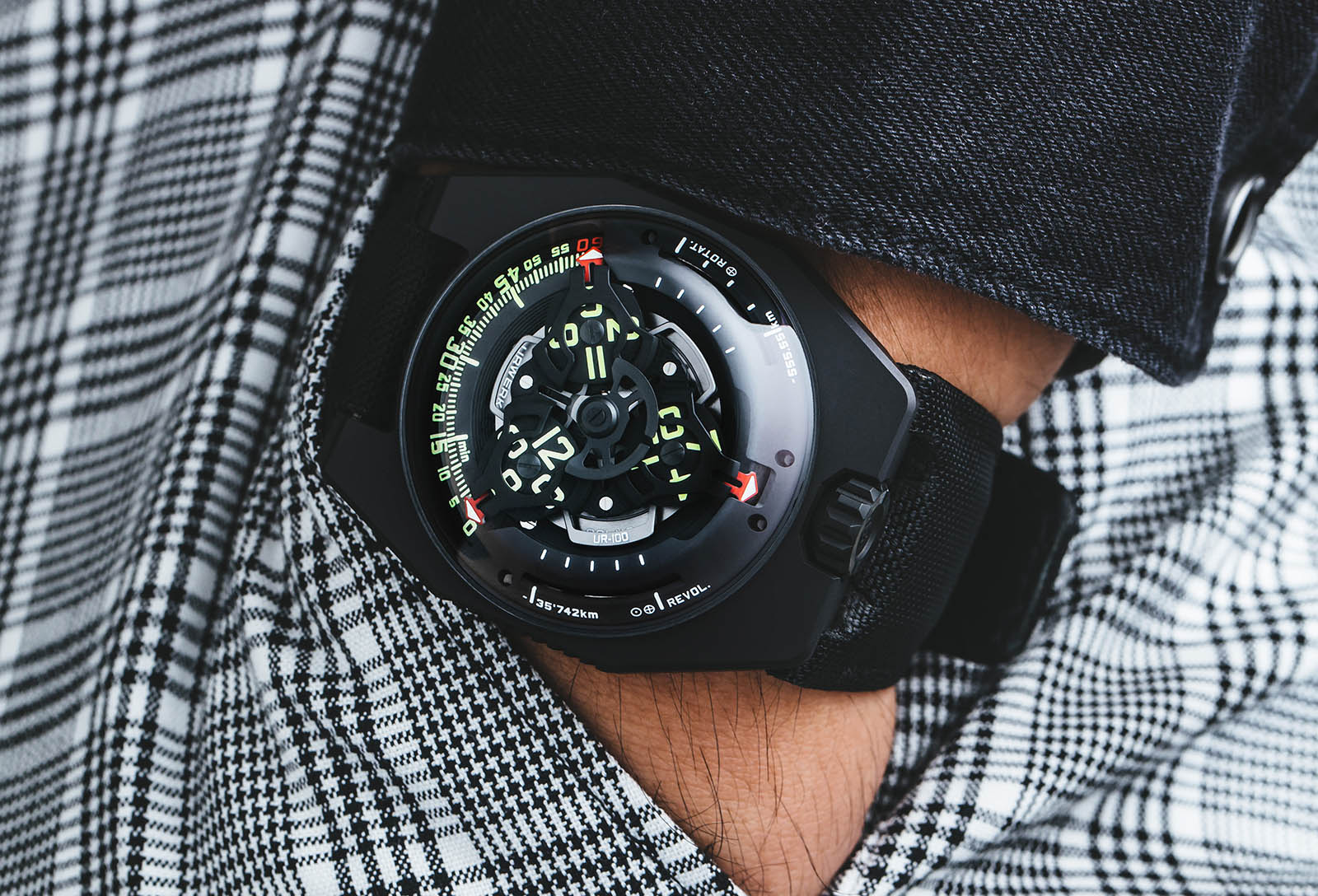 The carousel of the UR-100 SpaceTime is made of aluminium and open-worked, revealing the hour satellites, each with four digits. And below the satellites are the beryllium bronze Maltese crosses that create the non-linear rotation of the satellites. 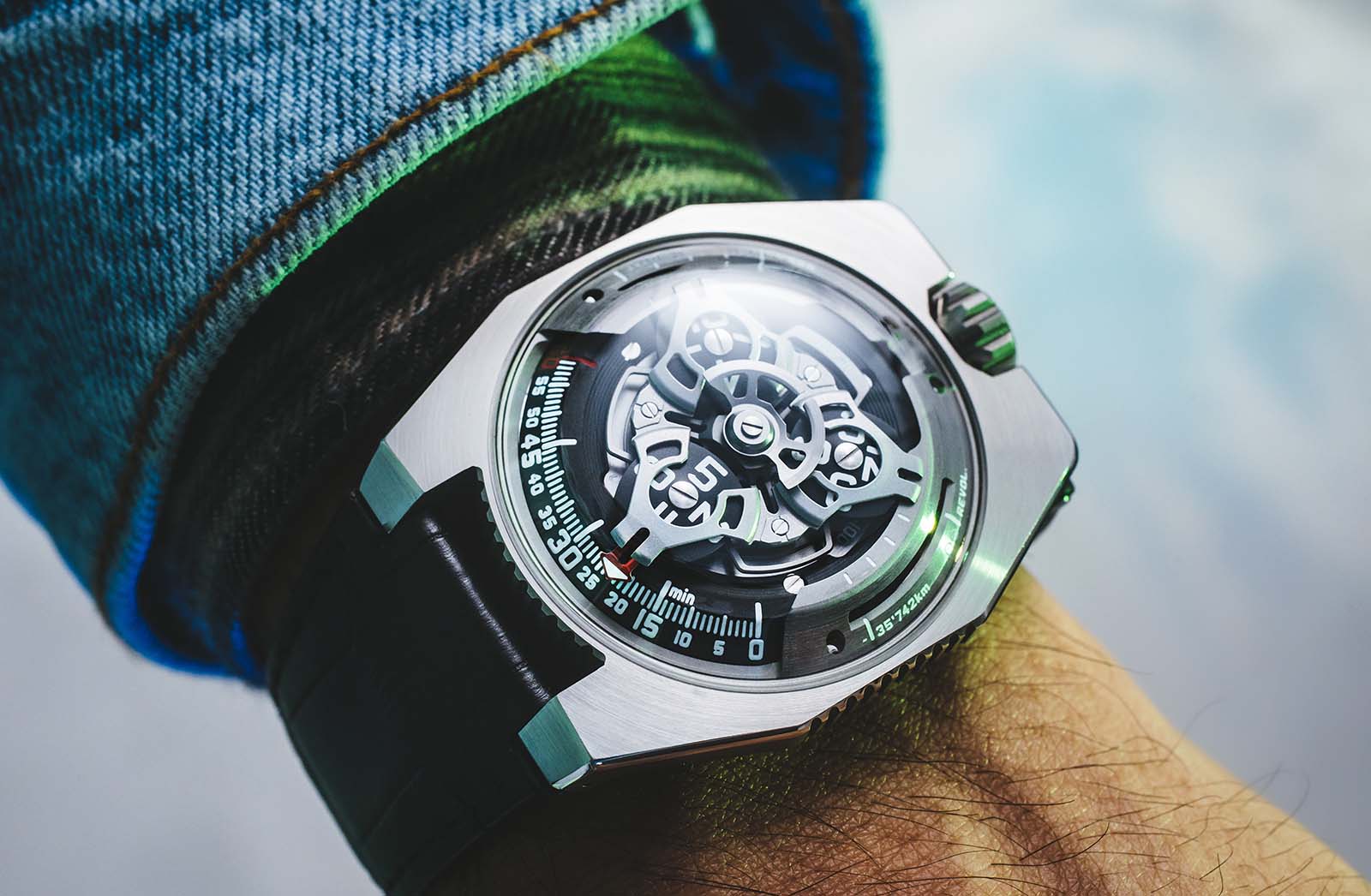 Available in either stainless steel or PVD-coated titanium, the case is an elongated-octagon, with vertical fluting along the sides, and a domed sapphire crystal on top. It measures 41mm by 49.7mm and stands 14mm high, making it chunky but wearable.

Notably, the case of the UR-100 SpaceTime is decidedly more angular than Urwerk’s defining watches. In fact, the case has a bit of a 1970s ring to its shape, especially with the concentric brushed finish on its top surface. 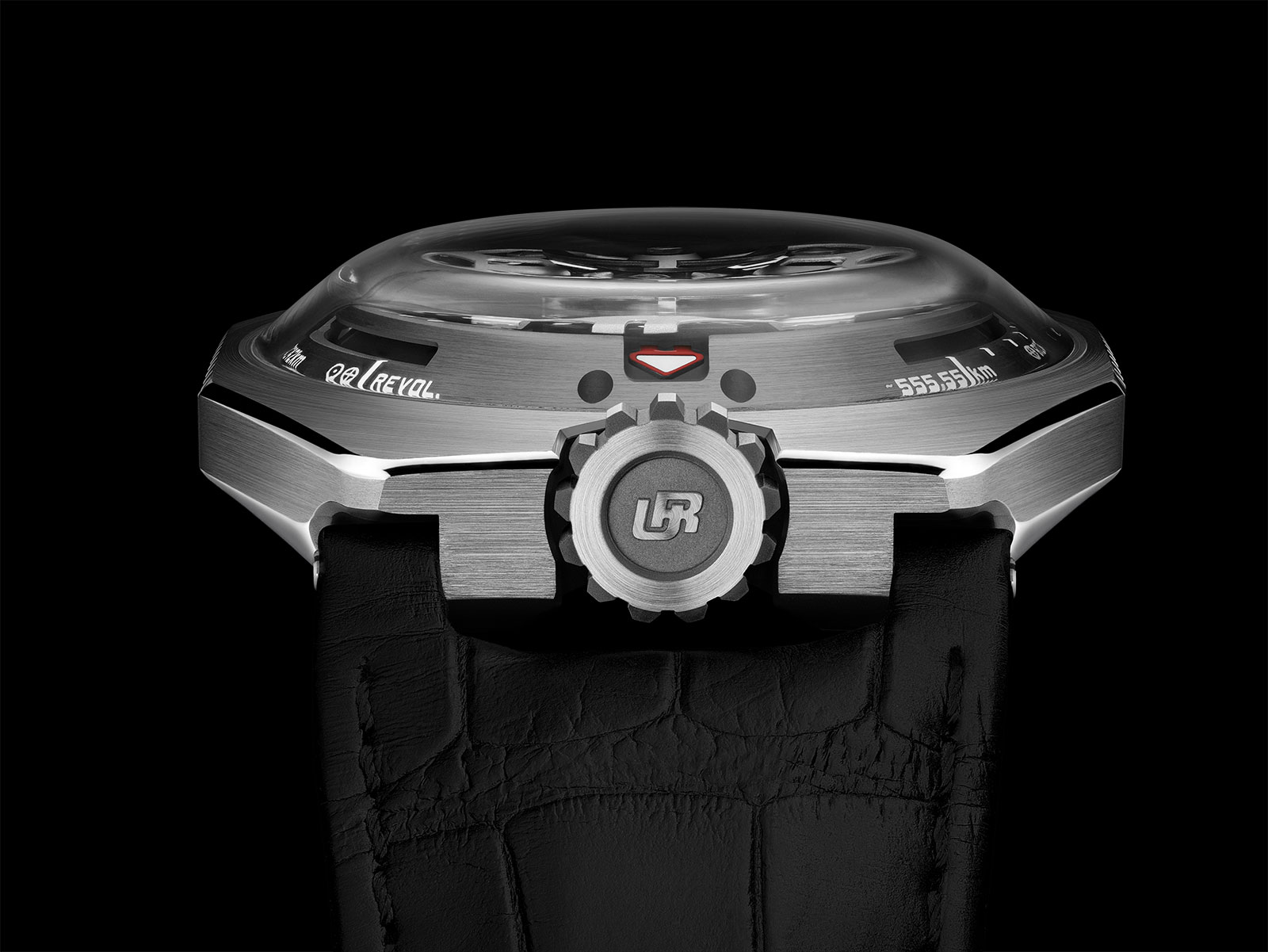 And most unusually for Urwerk, the UR-100 has a display back showing the cal. 12.01 inside. A perforated rotor covers most of the movement, but what lies beneath is a Zenith Elite automatic, the base movement for most of Urwerk’s watches.

The movement has its baseplates made in ARCAP, a non-ferrous nickel-copper alloy. And it is equipped with a flat turbine – the little propeller-shaped wheel at the base of the rotor – to regulate the rotational speed of the rotor. According to Urwerk, the flat turbine, or windfänger (Swiss German for “air trap”), makes six rotations for every rotation of the rotor and in the process moderates the spin of the rotor. 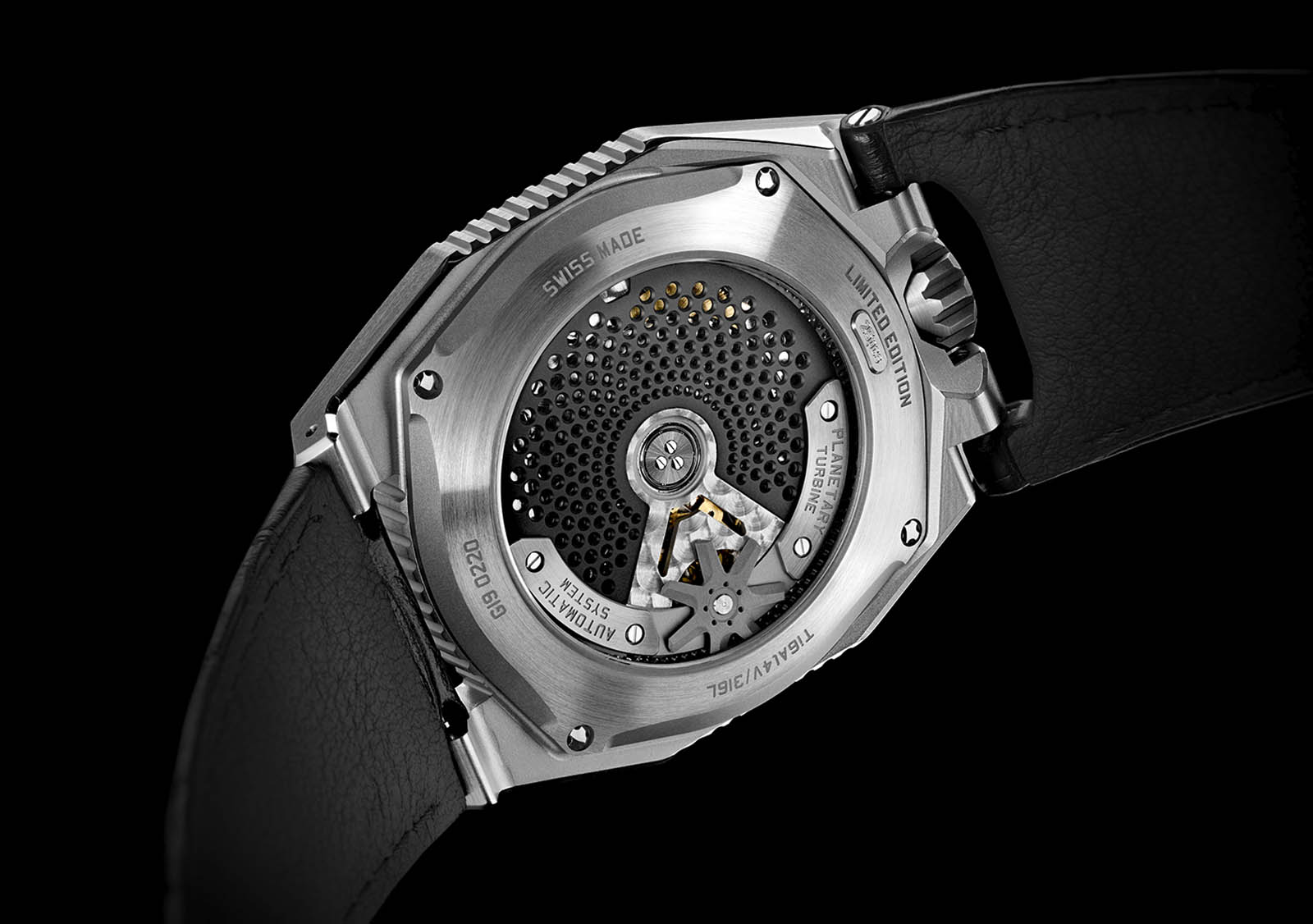 Correction September 12, 2019: The astronomical displays measure distance, not speed as stated in an earlier version of the article.