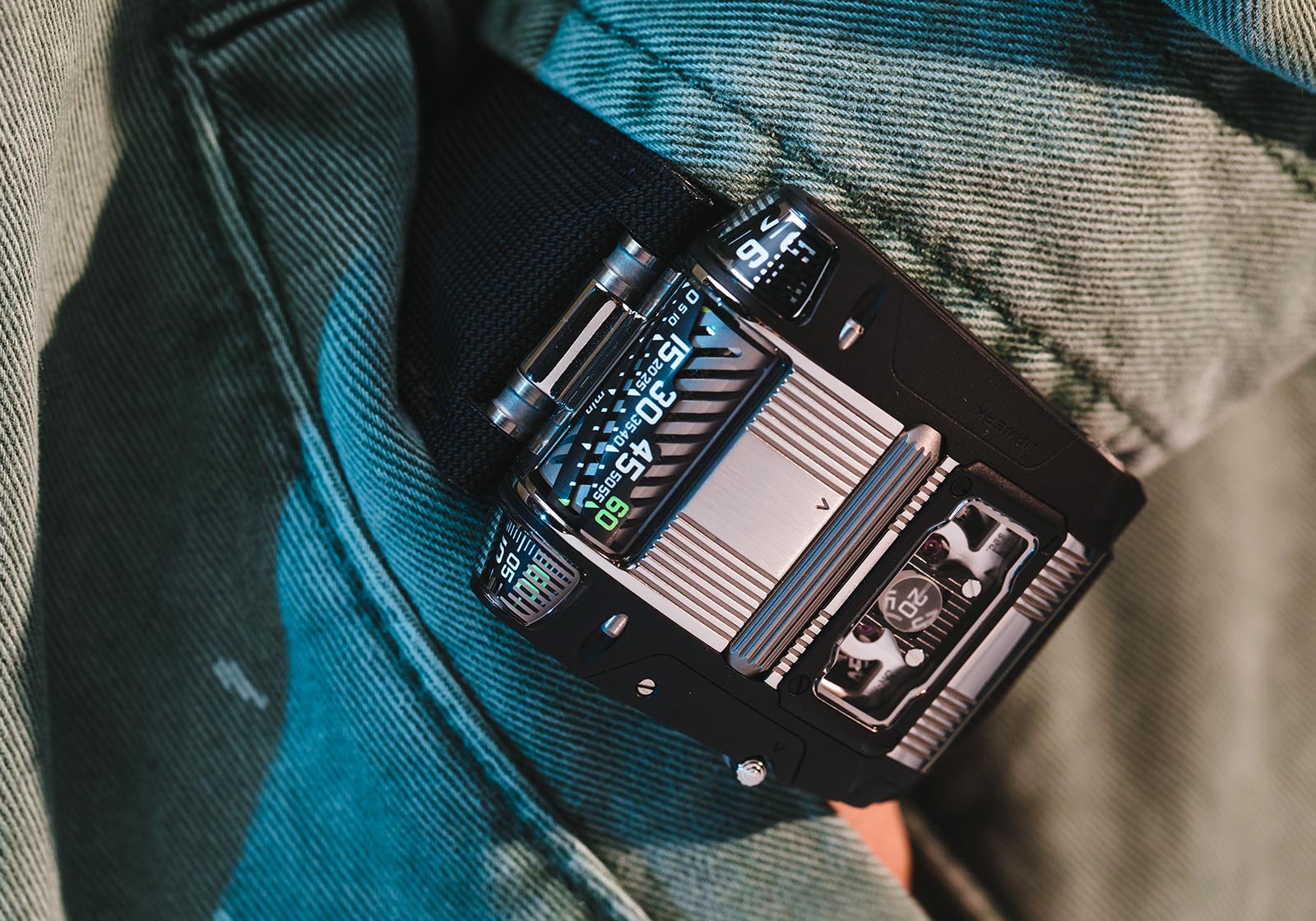 Two years ago, Urwerk unveiled the UR-111C, inspired by the UR-CC1 King Cobra of 2009, which was itself based on an experimental watch built by watchmaker Louis Cottier and jeweller Gilbert Albert for Patek Philippe in 1959.

Displaying the time in a linear fashion, the UR-111C marked a departure from the wandering-hour satellite indication that has become the hallmark of Urwerk’s aggressively futuristic watches.

Having already presented four variants of the watch in various finishes, as well as an engraved unique piece, the brand has now unveiled the UR-111C Two-Tone, featuring a case that combines a black coating with brushed and polished steel. 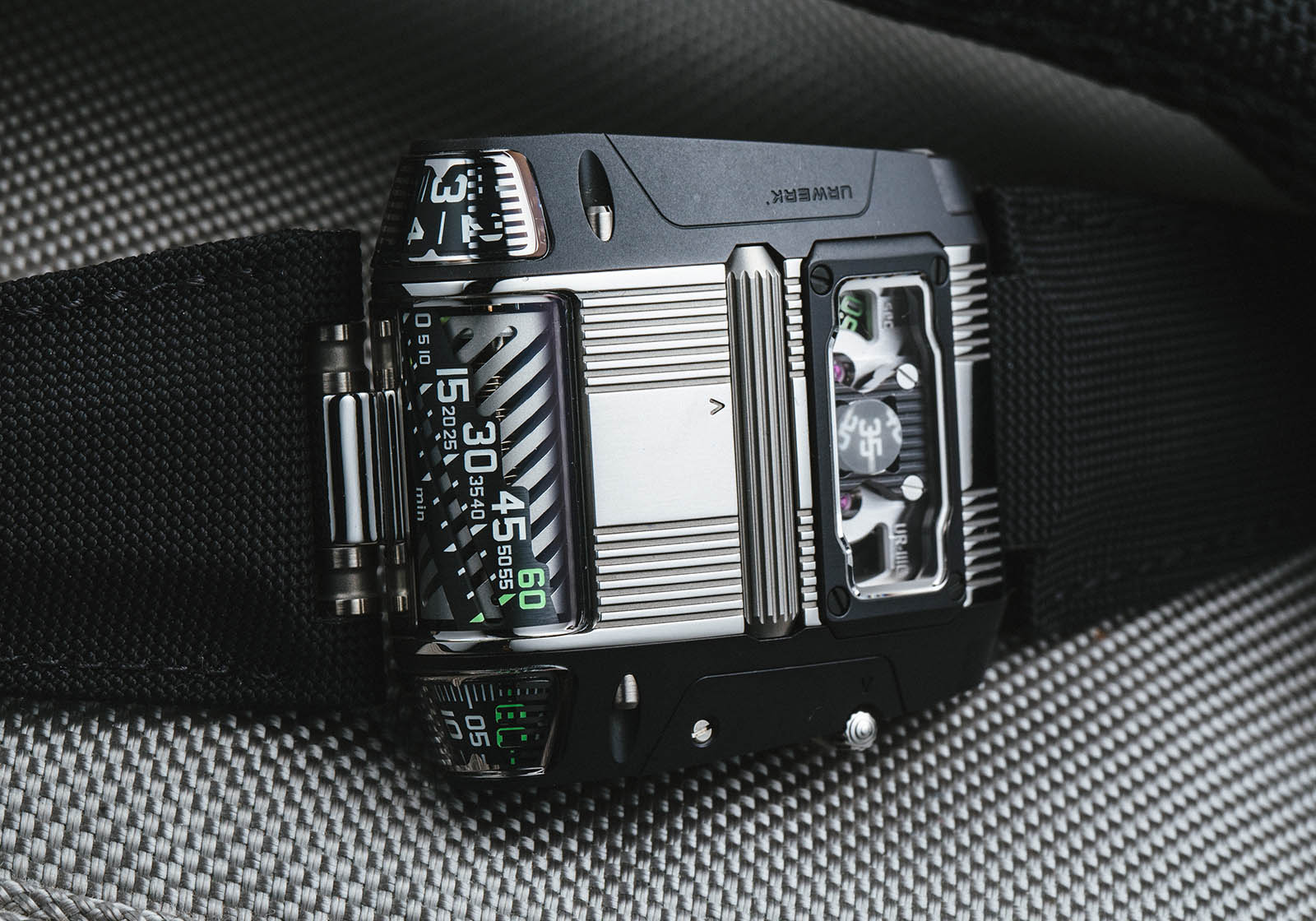 The central portion of the case is executed in brushed steel, flanked by black-coated ends that close off the tube-like central portion. The use of different finishes accentuates the architecture of the case, drawing attention to its centre, which contains the key functions, including the time display and roller-style crown.

Cosmetics aside, the UR-111C Two-Tone is otherwise identical to the earlier versions. At 42 mm by 46 mm and 15 mm high at its thickest point, it is by no means a small watch but the curvature of the case ensures it sits flat and comfortably on the wrist. 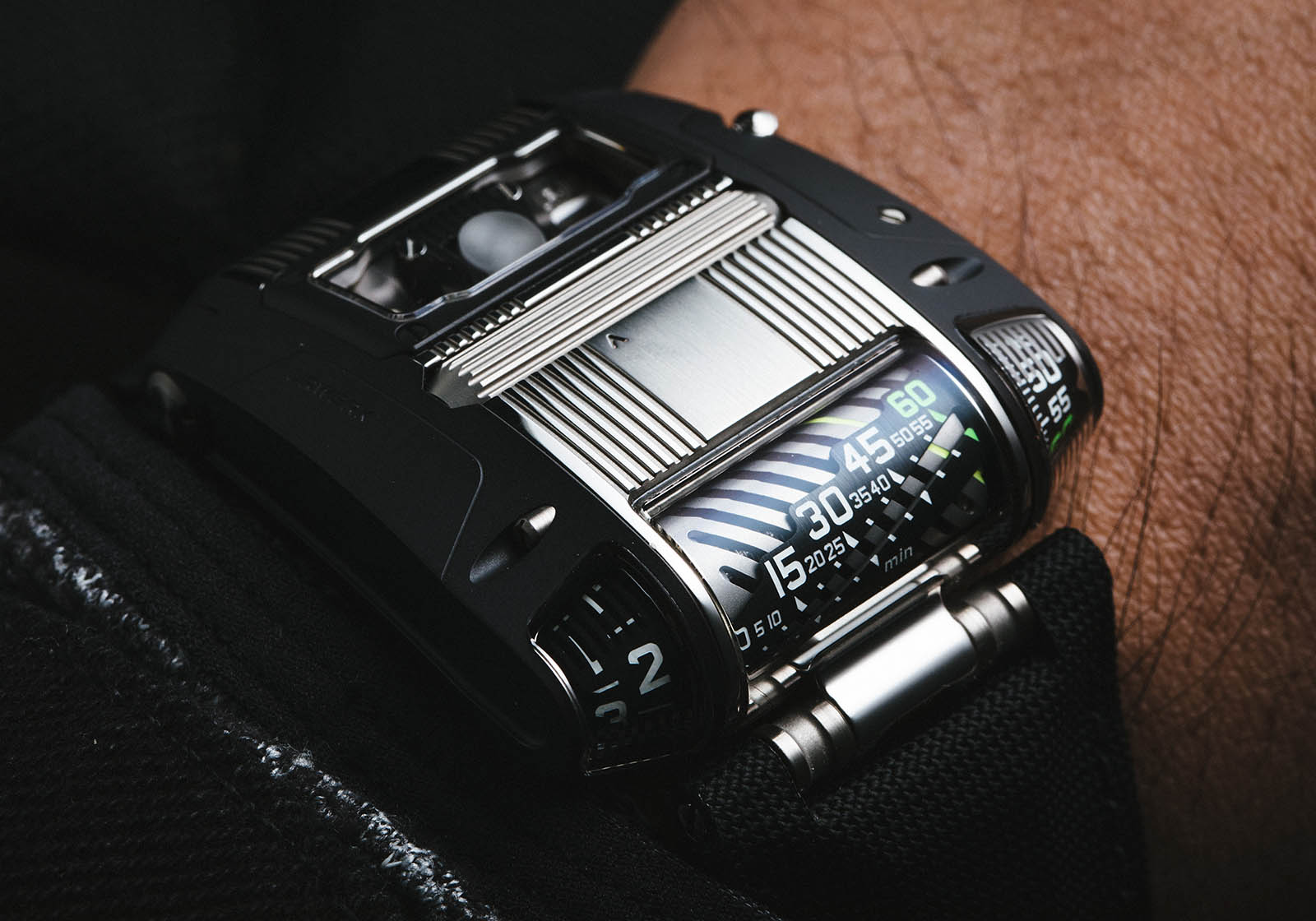 Despite its complex design, time is presented in a fairly straightforward manner with three rounded sapphire windows located at the front edge of the case to facilitate better readability while driving.

The jumping hours and progressive minutes are displayed on rotating drums on the left and right respectively while the retrograde minutes is displayed in the central window via retrograde linear indication. 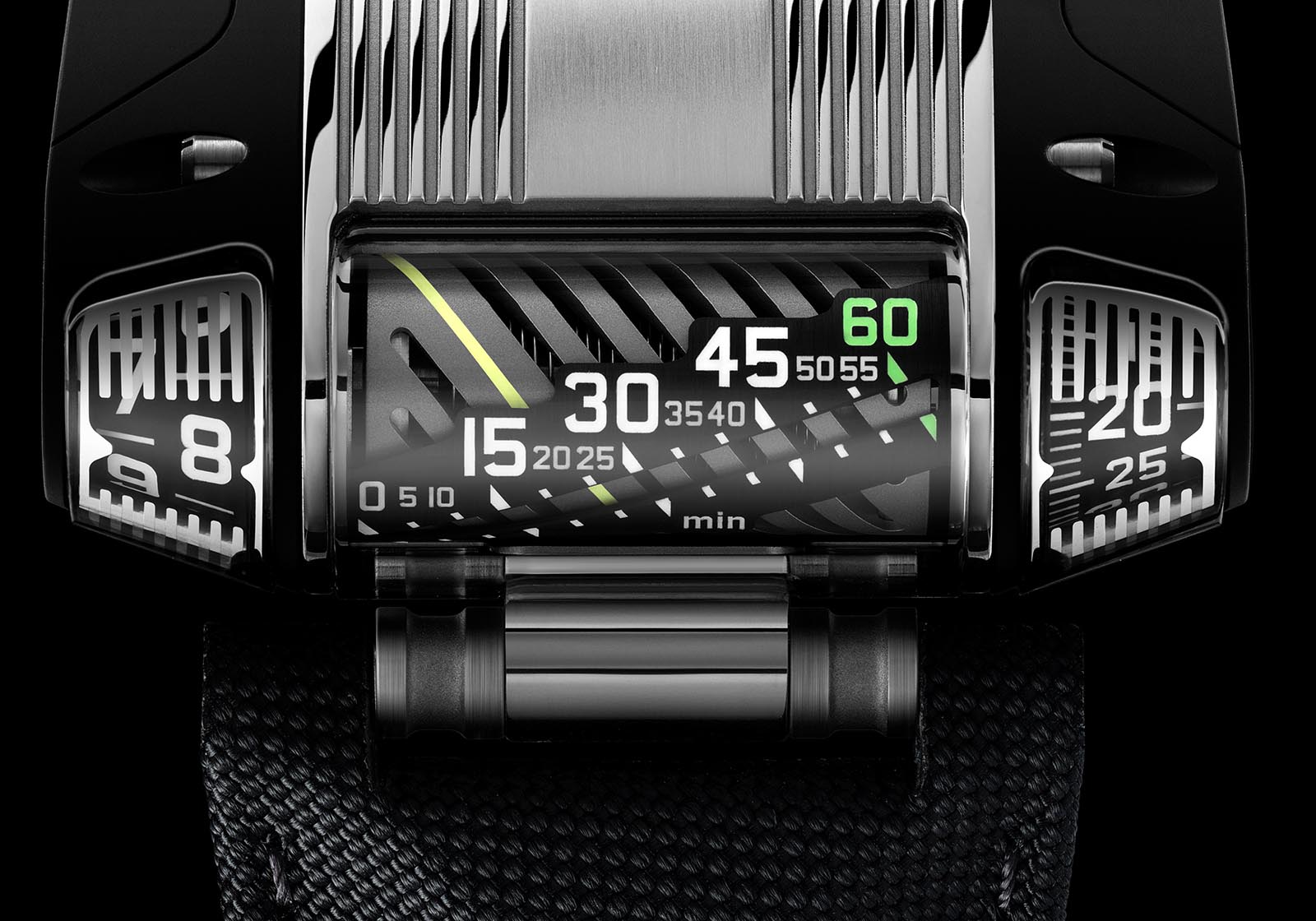 The numerals on the retrograde track are set at a 30° diagonal slant. Behind which is a cylindrical drum, marked with a yellow line, that makes one revolution per hour, thereby indicating the minutes as the line progresses upwards along the minute track. 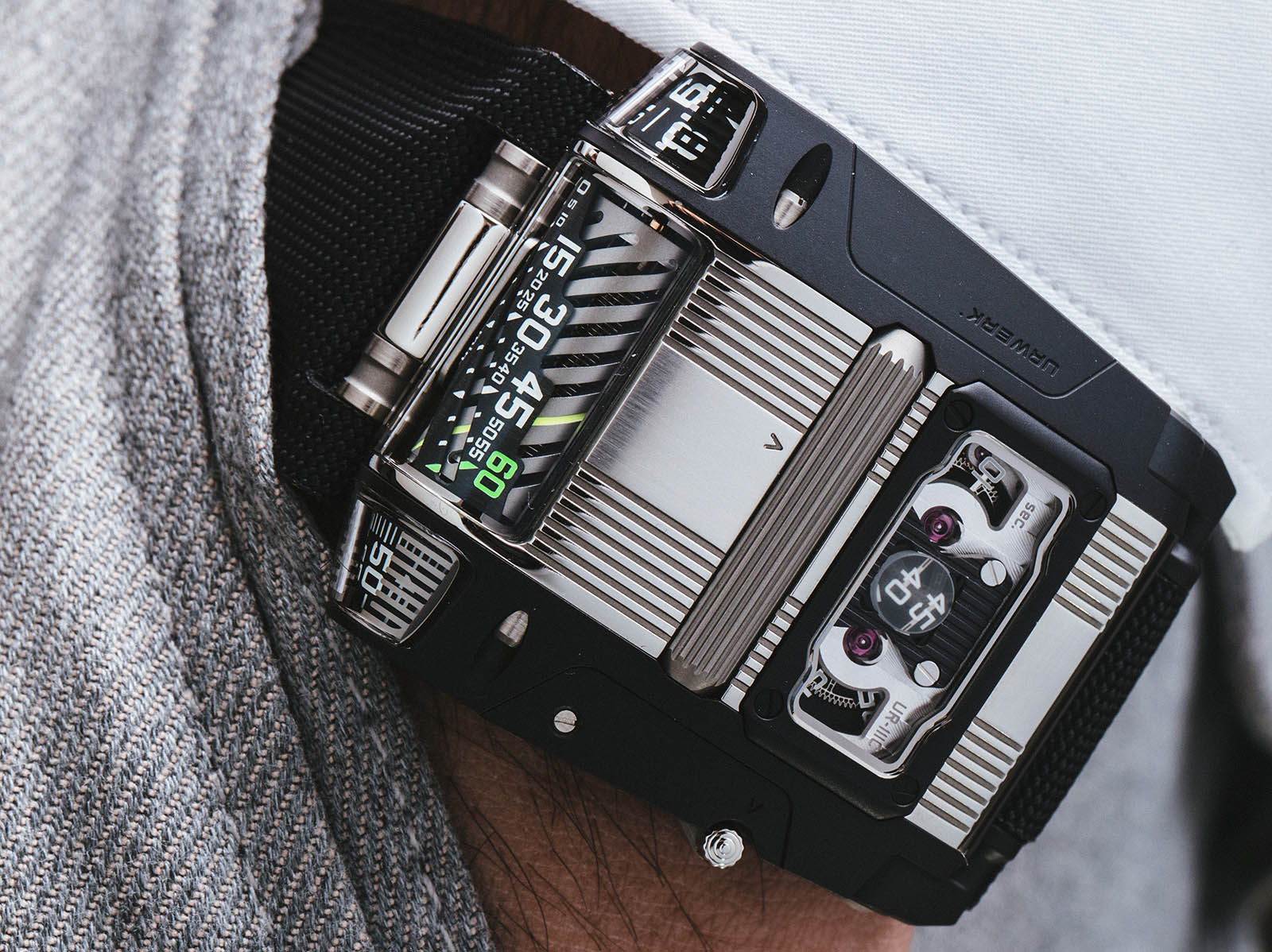 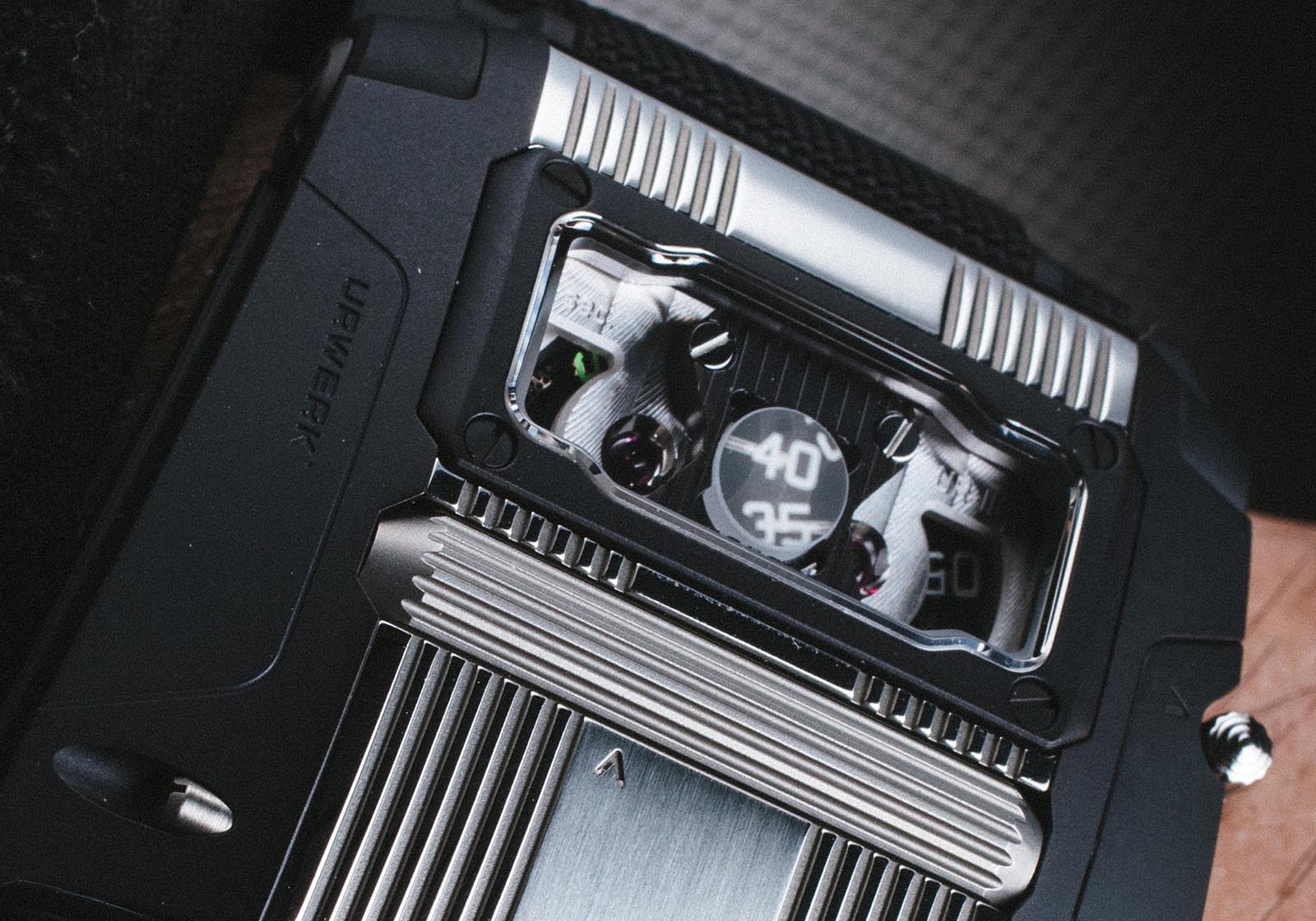 The digital seconds are displayed at the top of the case with two skeletonised wheels, each carrying alternating five-second numerals pass  a circular window which projects the numbers towards the sapphire crystal aperture via optical fibers.

And lastly, instead of a conventional crown, the watch incorporates a roller in the middle of the case for winding the mainspring, along with an extractable lever for setting the time – even while on the wrist.

A return to form for the avant-garde watchmaker.