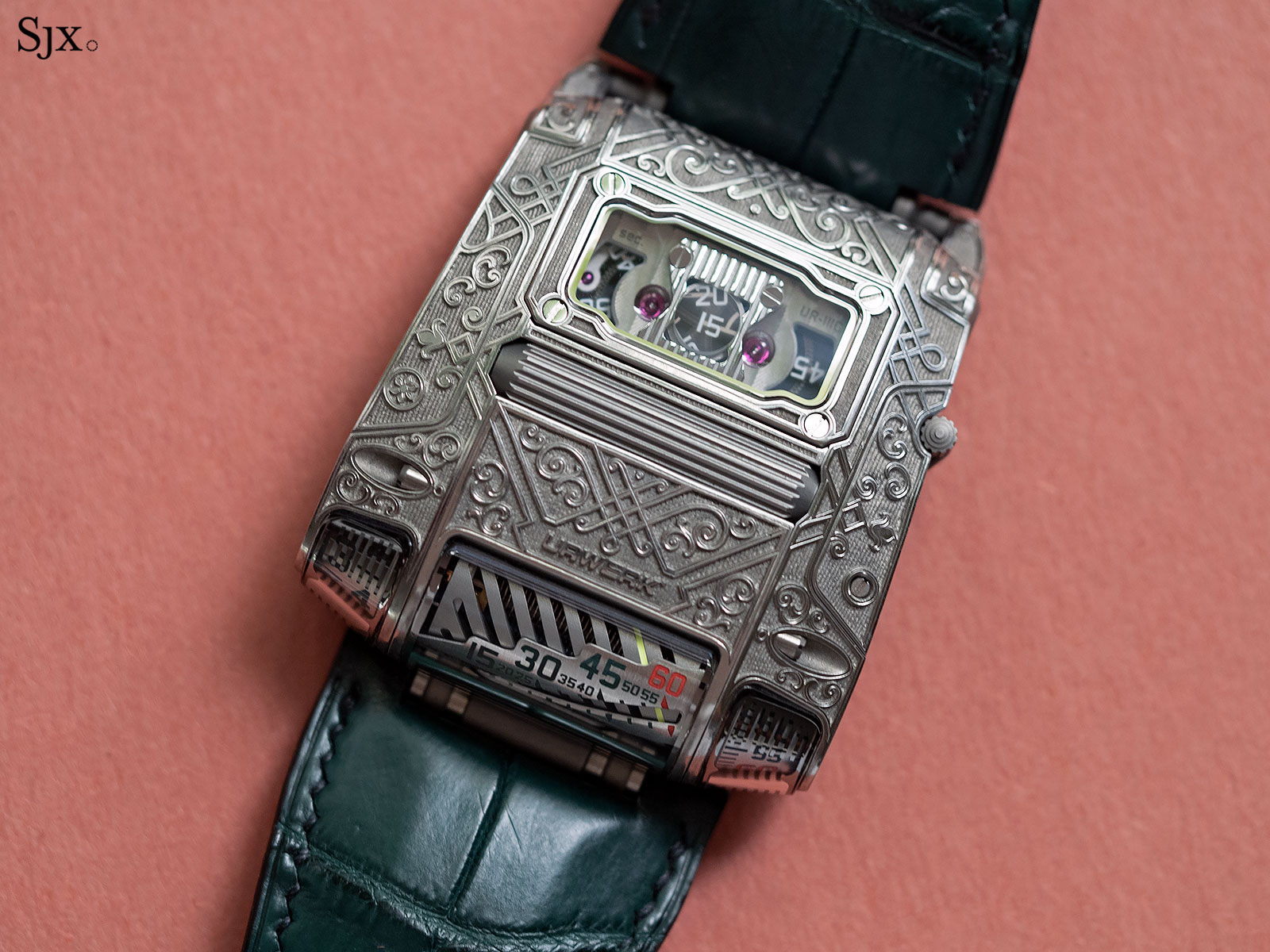 The average Urwerk is distinctly sci-fi in appearance, more Star Trek than Games of Thrones. But every once in a while Urwerk gives one of its watches the ornately-fully-engraved treatment, with the latest being the UR-111C “Pistol”.

It’s a one-off creation based on the UR-111C, a watch inspired by the earlier and much more expensive UR-CC1, itself modelled on the 1950s Patek Philippe ref. 3414, an experimental wristwatch nicknamed “Cobra”. The standard UR-111C has a streamlined case with a mechanical looking details, very much in the house style of Urwerk.

The Pistol, in contrast, is decorated on all surfaces with an ornate motif that’s hand-engraved by Urwerk’s go-to engraver. It was commissioned by a client who has a soft spot for such engraved Urwerk watches; the UR-111C “Pistol” is his third fully engraved watch.

(Editor’s note: This Pistol shares the same name as the EMC Pistol from 2015, and was decorated by the same engraver, but is a completely different model.) 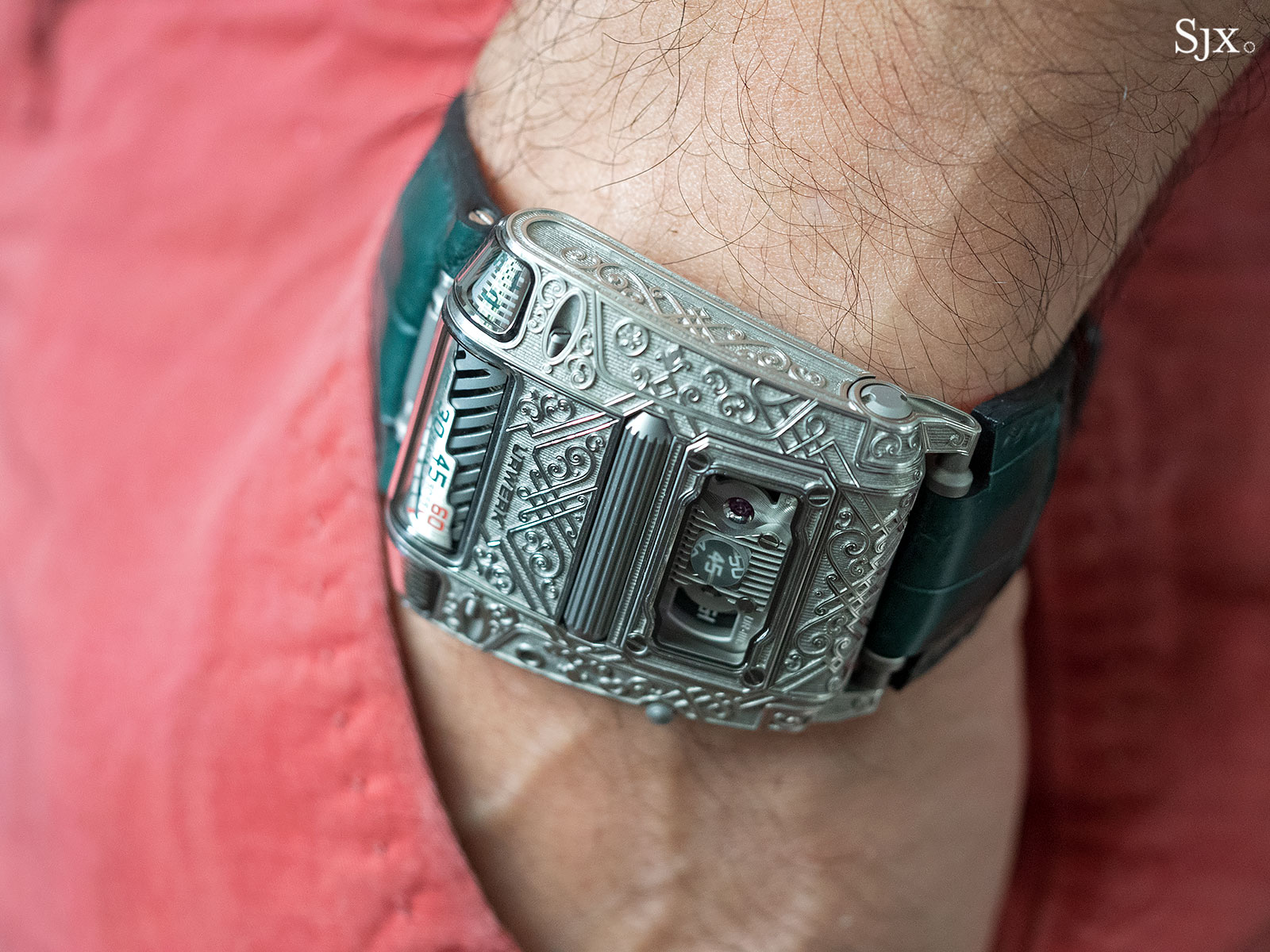 Inspired by 19th century French wrought iron fixtures, the motif is in relief, raised against the background by only a fraction of a millimetre but enough to give it significant depth. Add to that the refined, narrow and perfectly straight lines of the decoration, and the talent of the engraver is obvious. 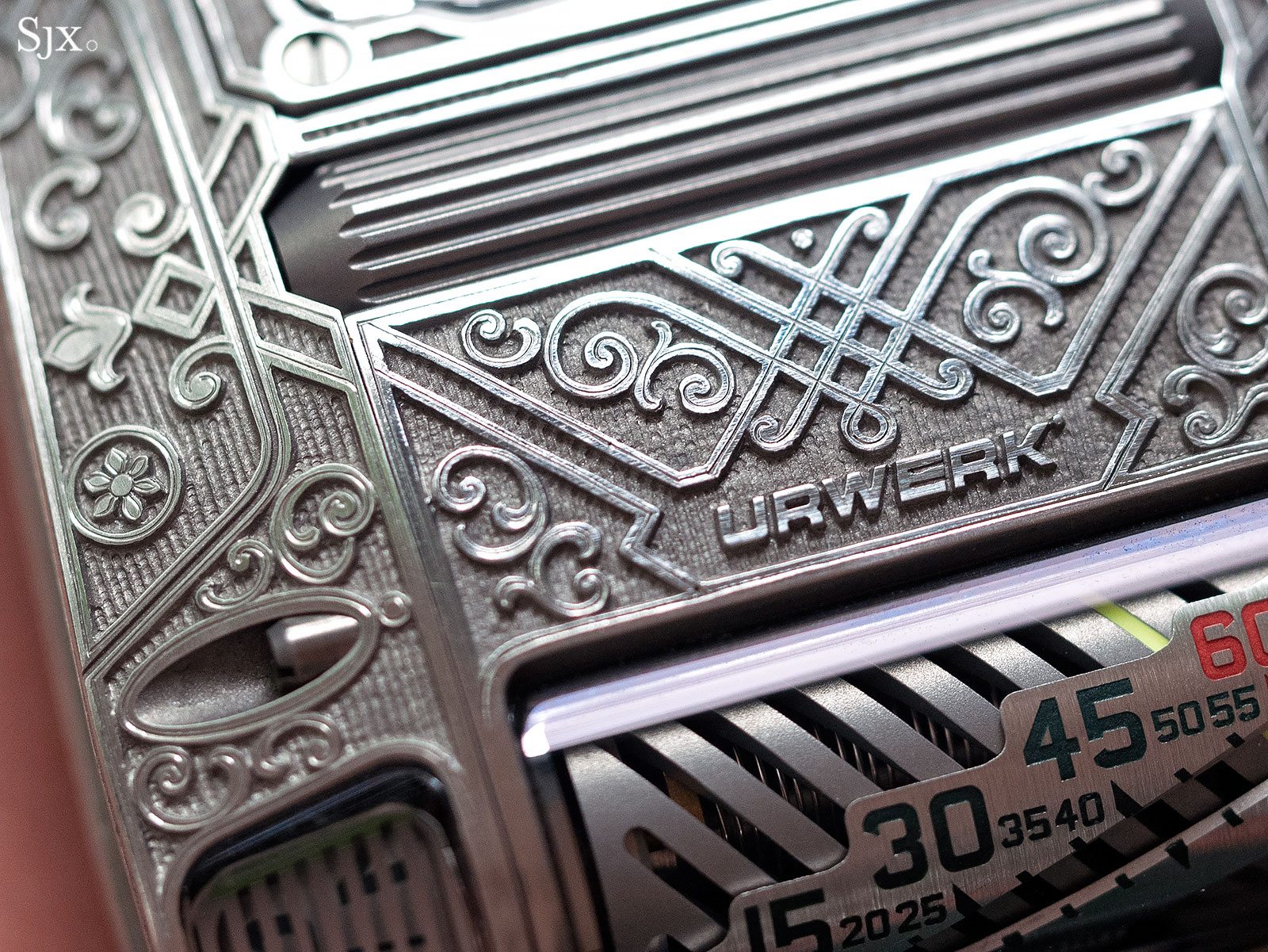 Credit for the work goes to Florian Güllert, an Austrian engraver who trained as a gunsmith and usually decorates firearms. Based in Klagenfurt, a city in the south of the country, Mr Güllert is responsible for all of Urwerk’s recent engraved watches, including the UR-210 “Dubai”, which is matched with a fully engraved bracelet; in its earlier years the brand relied on Swiss watch engraver Jean-Vincent Huguenin.

At a distance, Mr Güllert’s engraving is so well done it resembles machine engraving. Up close, tiny irregularities reveal themselves, proving that the decoration was done by hand, and done exceptionally well. 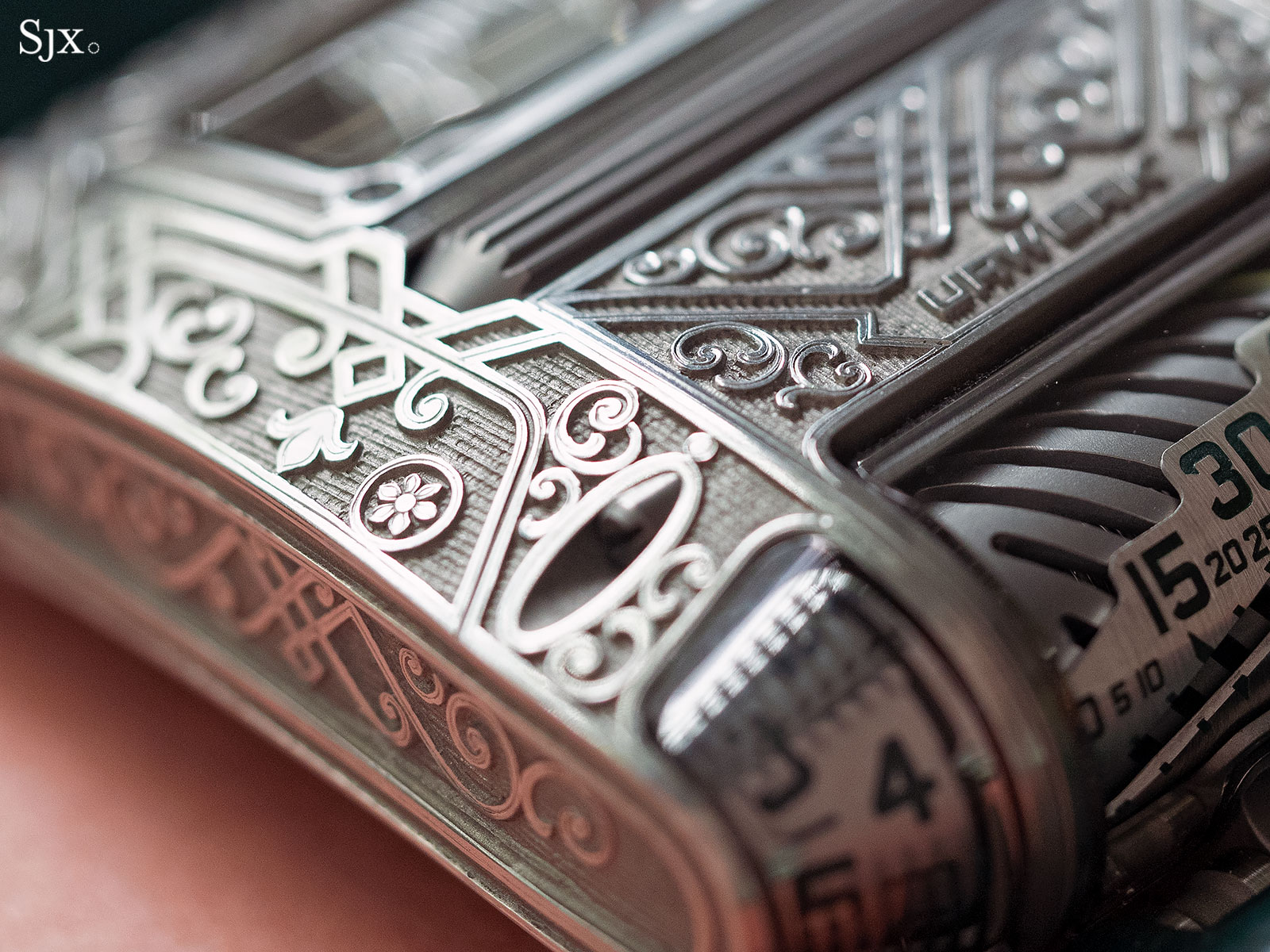 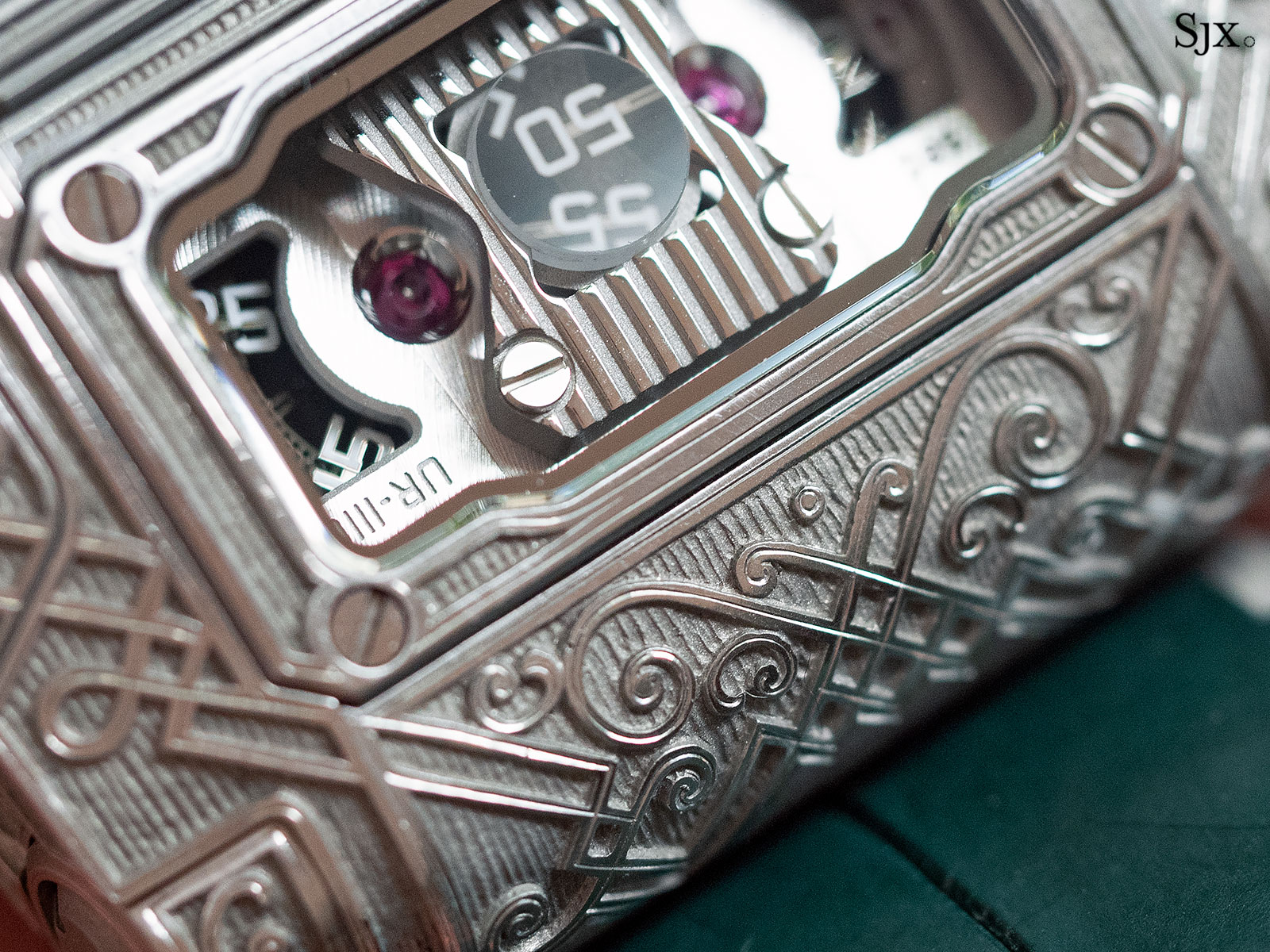 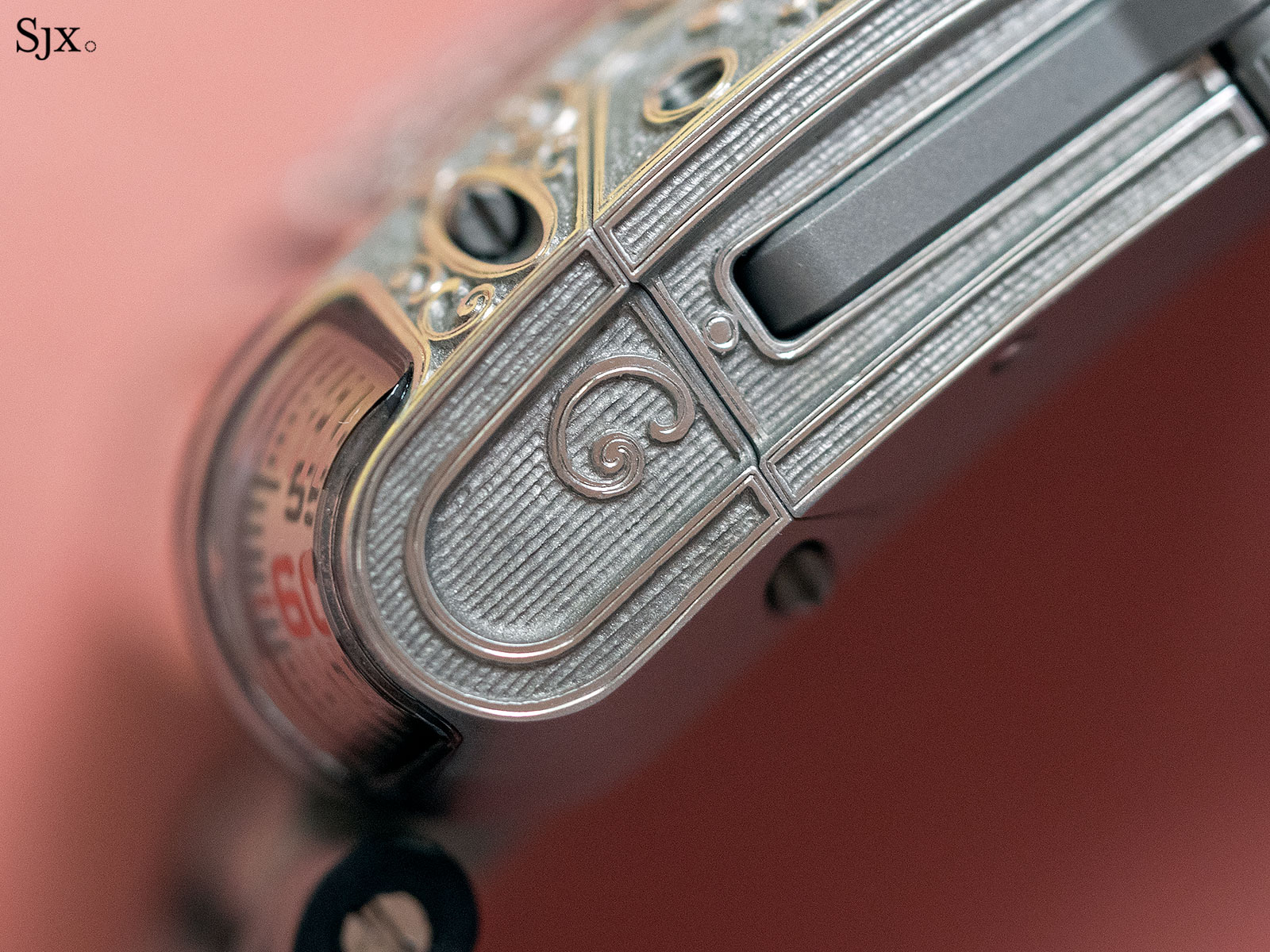 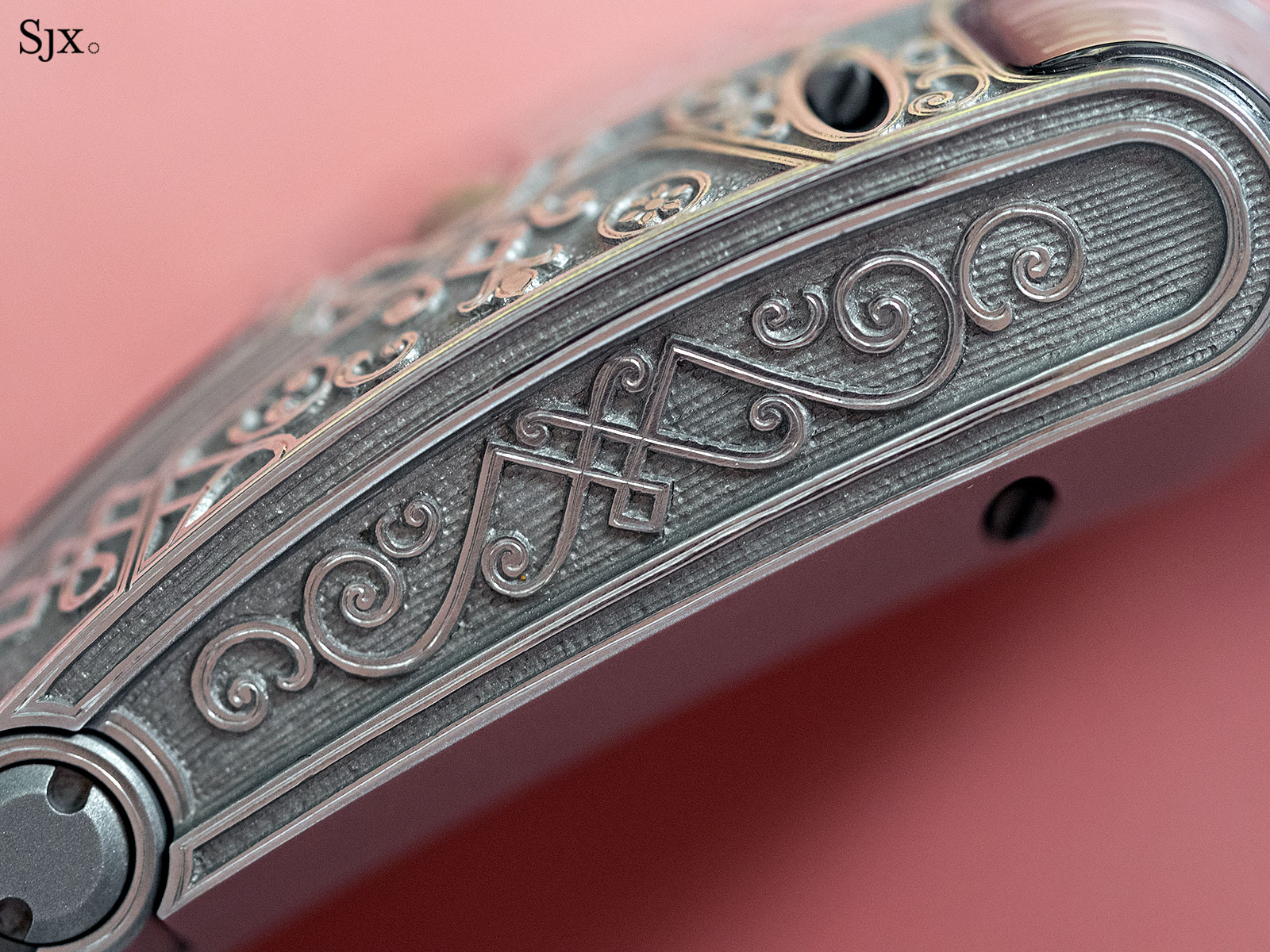 Aside from the obvious engraving, the Pistol is also distinguished by a more subtle customisation – the numerals for the time display are in a dark green similar to British racing green. The colour is subtle; because the shade is dark, at a distance it’s indistinguishable from black. With the time-setting lever extended 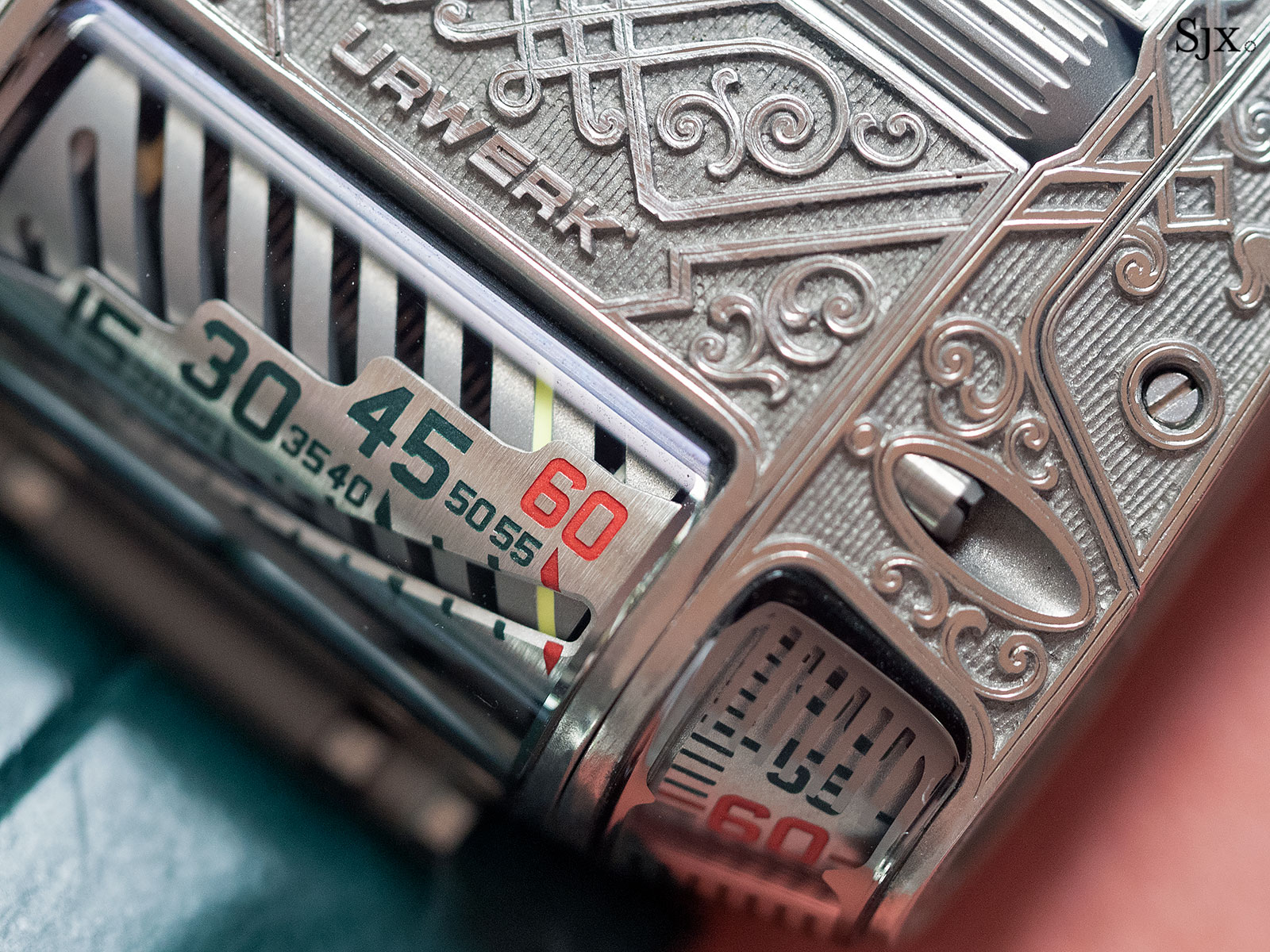 The rest of the watch is identical to the standard UR-111C. Hours are indicated on the left cone, with the minutes shown twice. First on the central cylinder, with a yellow strip that travels upwards towards “60” before jumping back to zero, and the second minute display on the right cone.

The retrograde cylinder relies on a long, coiled spring inside that gradually winds up as the minutes progress towards “60”. At the top of the hour the spring is released, bringing the indicator on the cylinder back to zero. 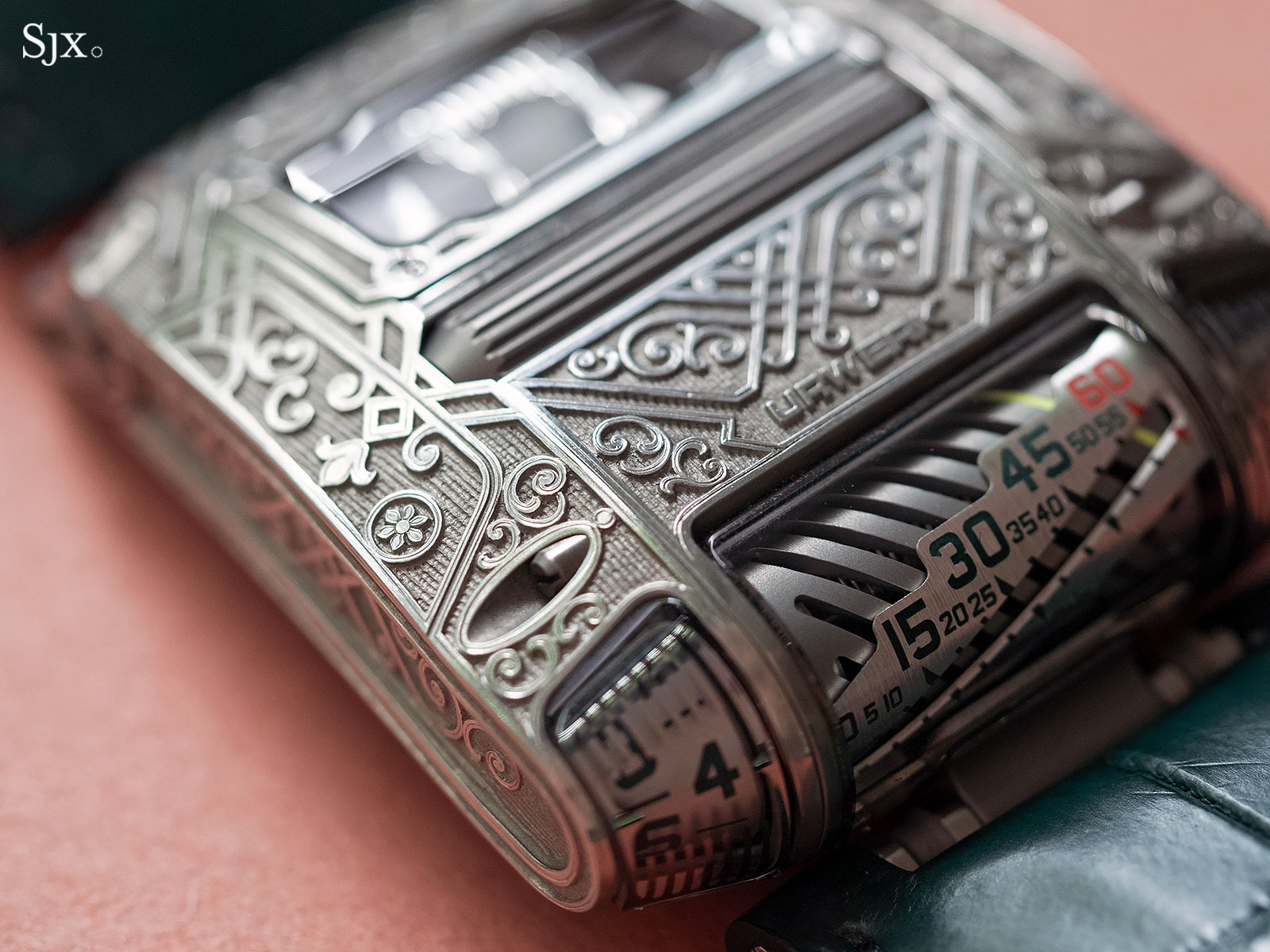 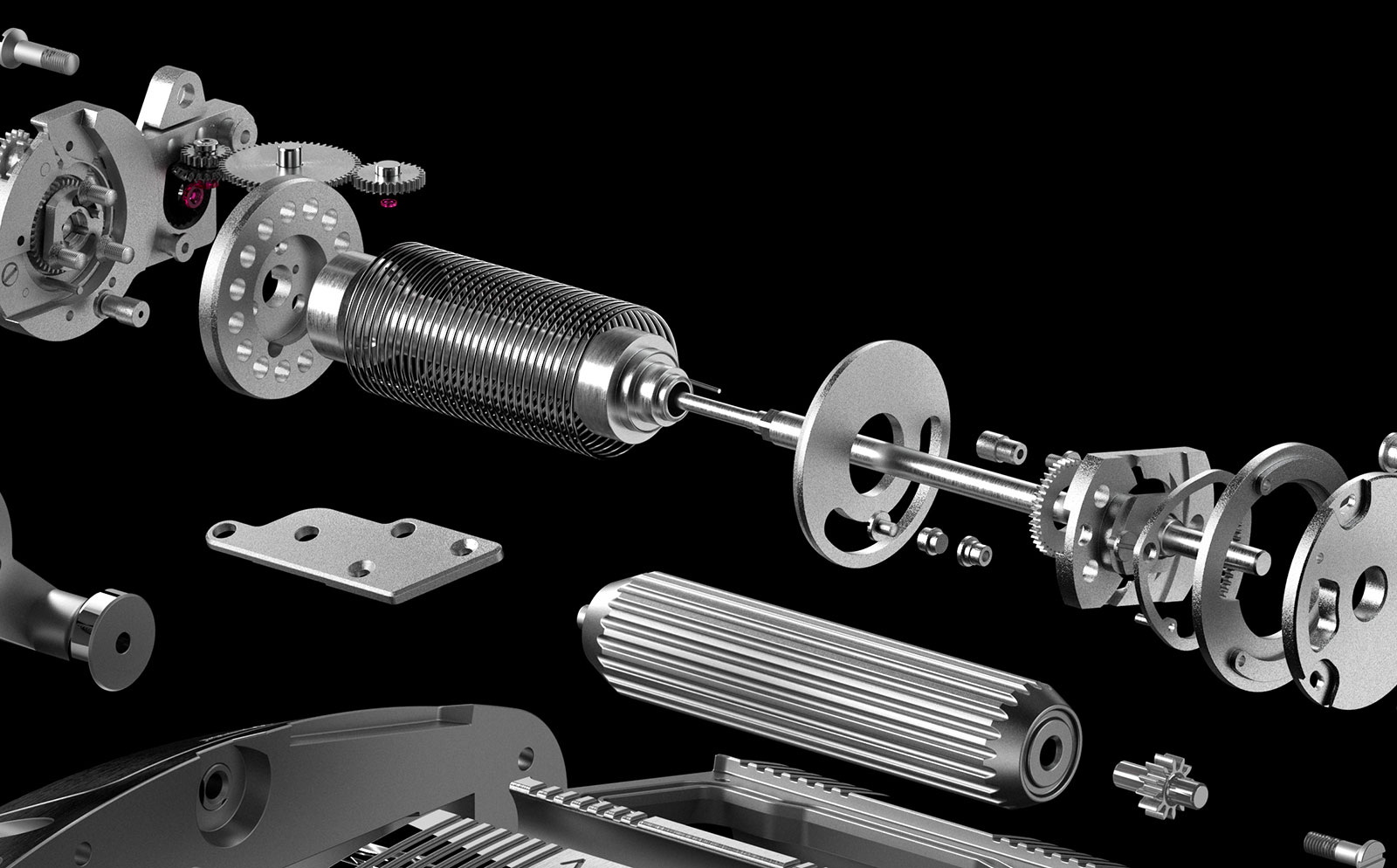 An exploded view of the mechanism inside the cylinder for the retrograde minutes. Photo – Urwerk

And the seconds are equally elaborate, indicated on the front panel of the watch in a large window. Two sweeping, skeletonised discs show the seconds. Each disc is graduated in alternating five-second increments, so the digital seconds sweep past in five-second steps. And the display is actually much larger than the discs below, thanks to a fibre optic tube that magnifies the numerals. 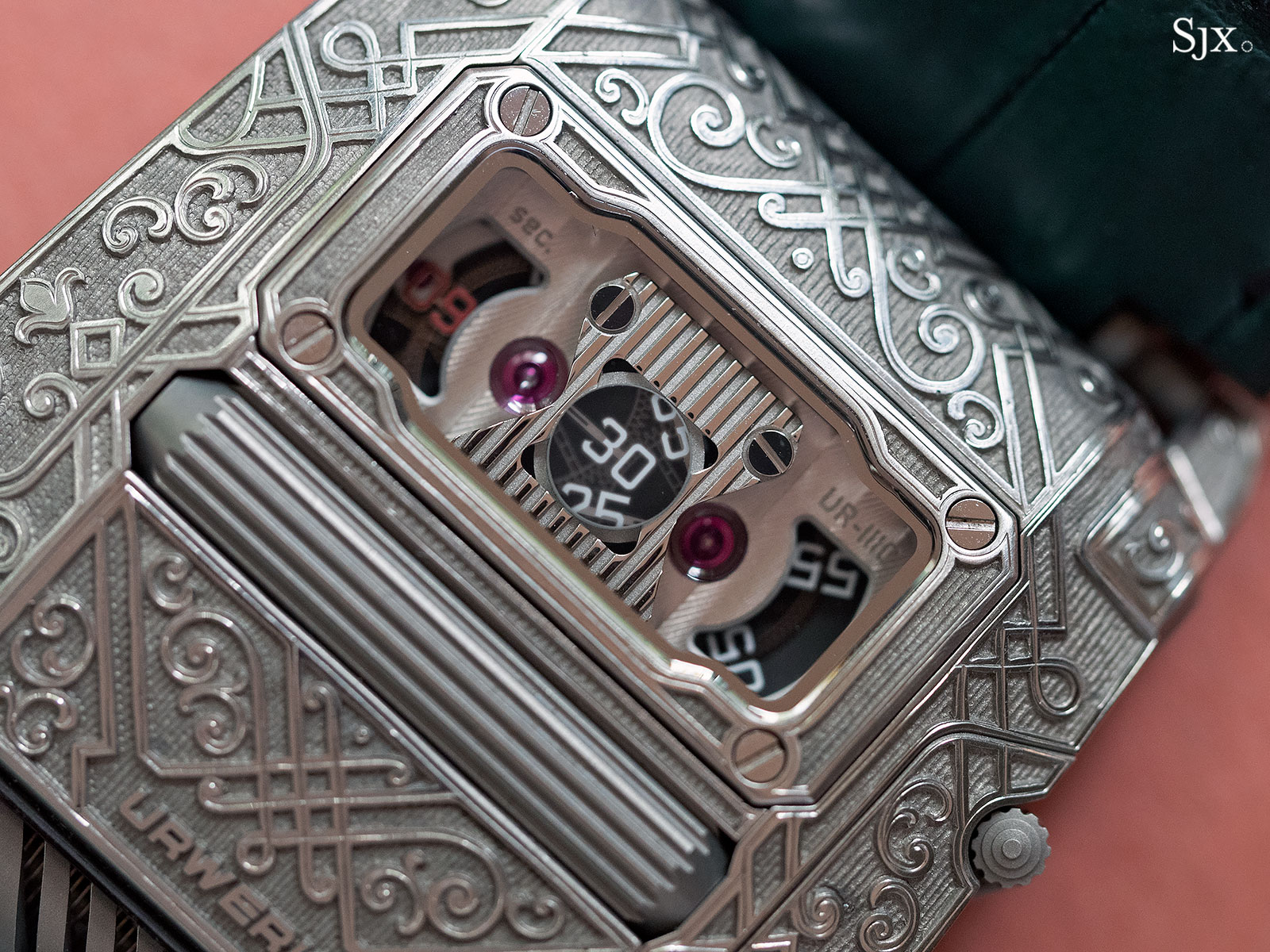 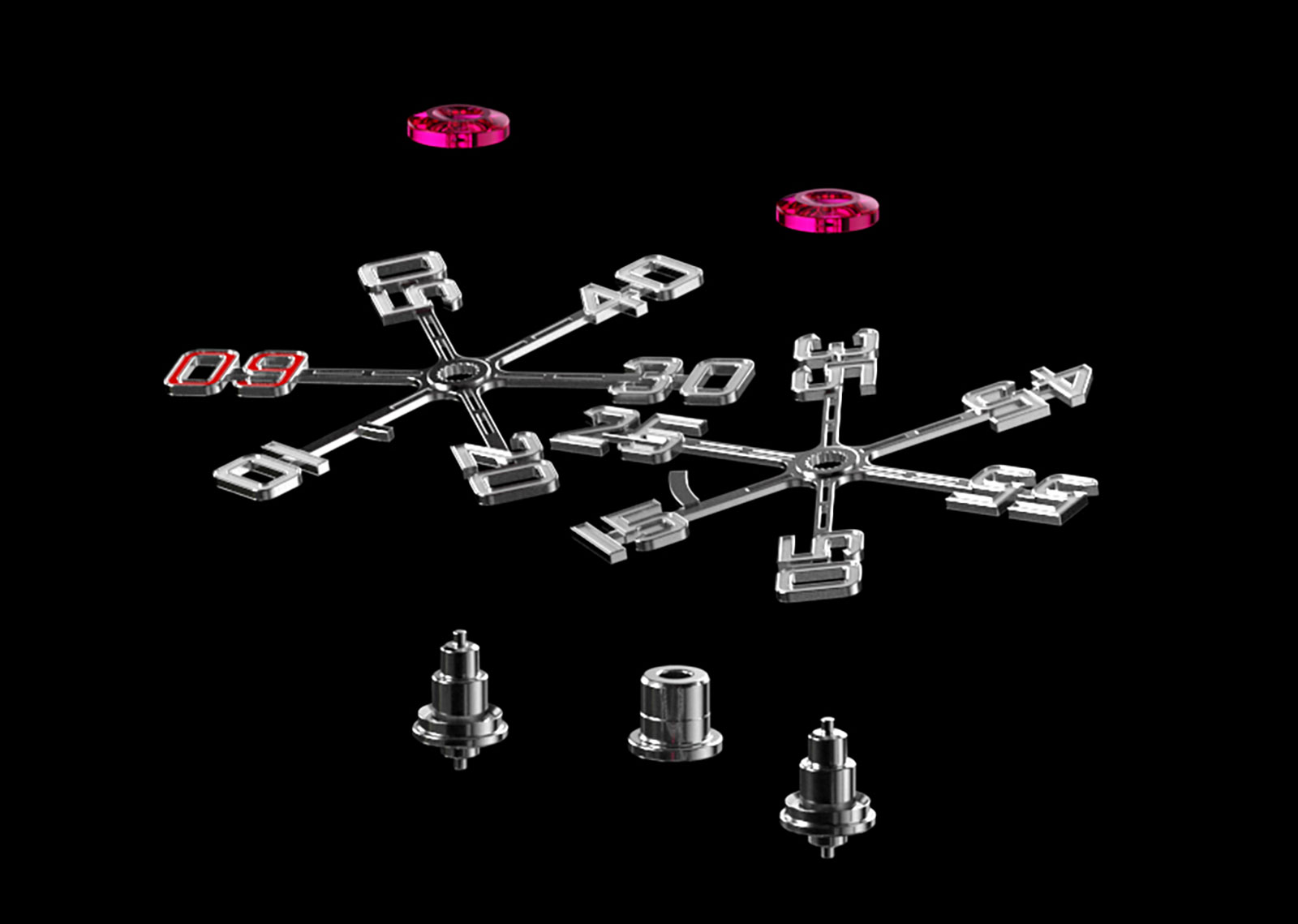 Winding and setting the watch is a bit of a hassle, which is often the price to pay for a mechanically ingenious time display. An elongated roller just below the window for the seconds winds the movement; pulling the lever from the right side of the case engages the time-setting mechanism, which is also done with the same roller.

The engraving on the case leaves the watch looking larger than the standard UR-111C; it also has more wrist presence. Visually the design of the watch and the engraving are cohesive, save for one detail – the typography for the time display. It’s modern-looking and identical to that on the standard model, and doesn’t quite match the elaborate engraving.

For what it costs – about a fifth more than the standard model – the fully engraved version is worth the stretch for someone who likes the style. 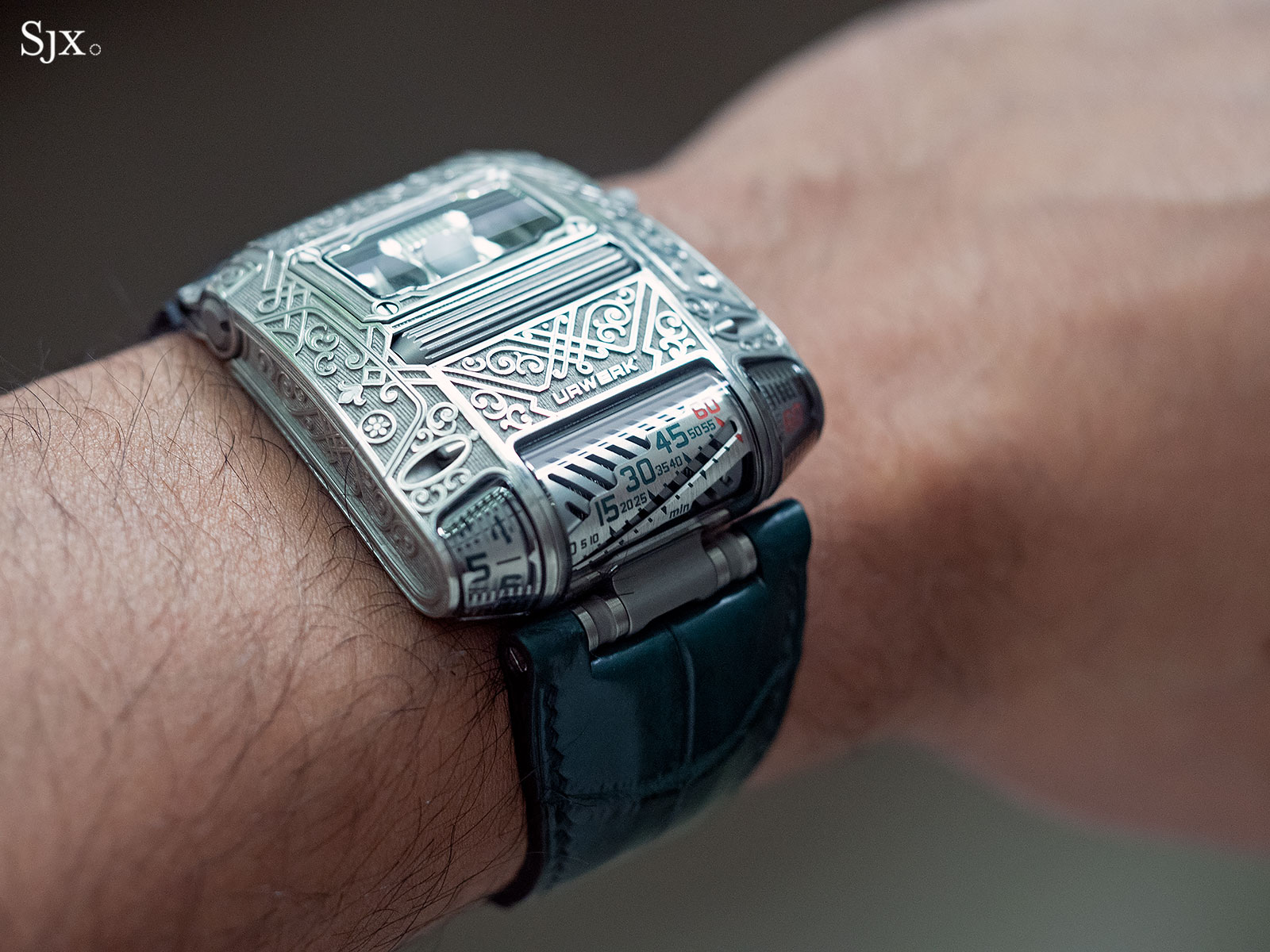 The UR-111C “Pistol” is a one-off commissioned by a client, however, Urwerk offers similar customisation for its various models. The additional cost of engraving is typically 10-30% over the retail price of a standard model.