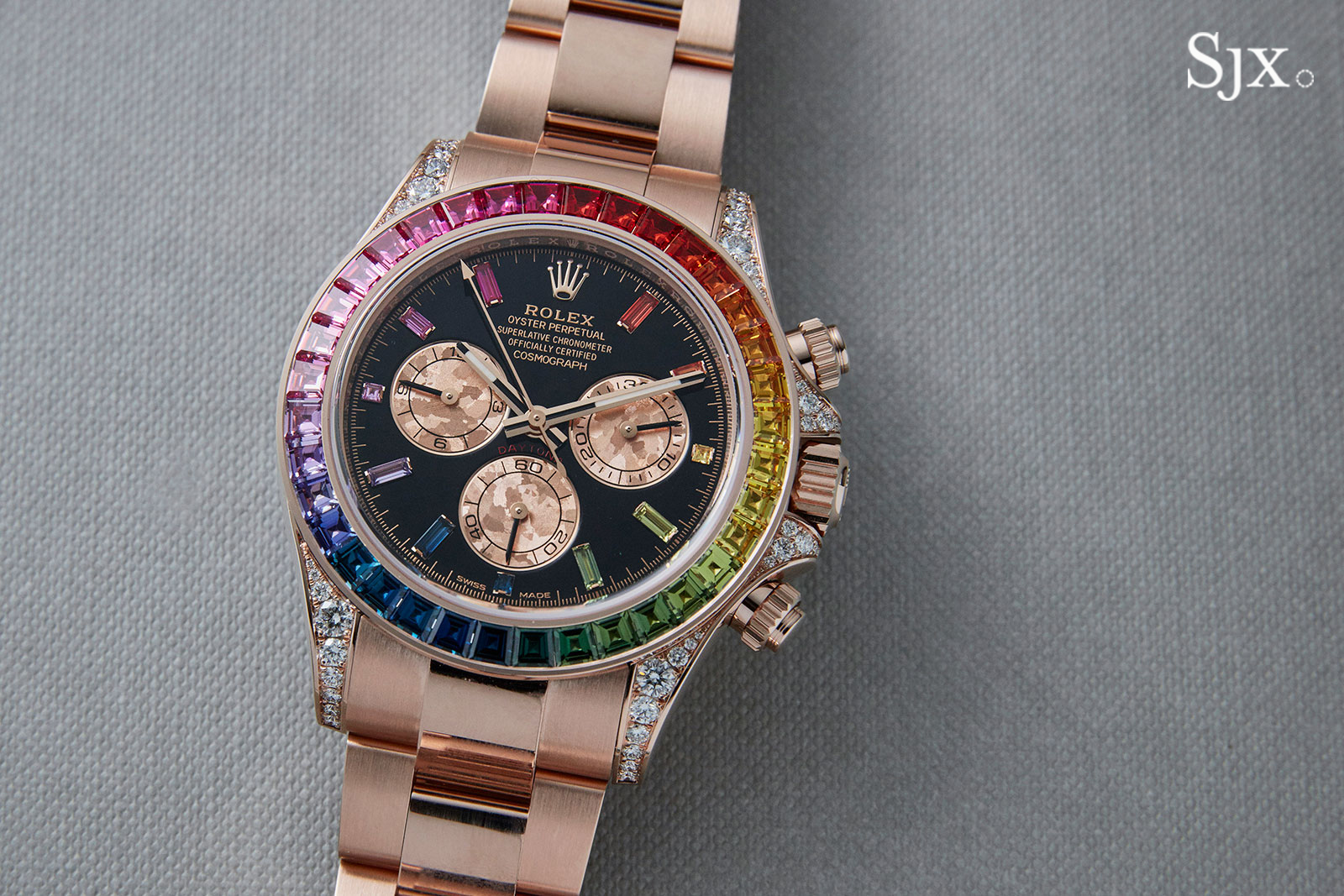 Boasting a team of in-house gemologists and gem-setters, Rolex consistently produces some of the most impressive bejewelled watches, none as distinctive and desirable as the Rolex Daytona “Rainbow” in 18k Everose gold – a surprise launch when Baselworld opened its doors.

While some might find the multicoloured gemstones peculiar, perhaps reminiscent of an Elton John concert costume, the Rainbow is memorable in form and impressive in detail. And it is also, almost unbelievably, more desirable than practically any other modern Rolex.

Like the Patek Philippe ref. 5270P with “salmon” dial launched at the same fair, the new Daytona Rainbow is a watchmaker’s affirmation of market demand by producing a model with lofty valuations on the secondary market.

The first generation Daytona Rainbow was introduced in 2012 in white and yellow gold, with a retail price of US$89,100. Produced only for a brief spell, reputedly because of difficulties in sourcing sufficient coloured sapphires in graduated colours, the original Rainbow now sells for US$250,000 or so. It’s buoyed by several factors, including rarity, an audience beyond the usual male watch enthusiasts since it appeals to women, and also the fact that many watch dealers who propel the secondary market are inclined towards flashy watches. 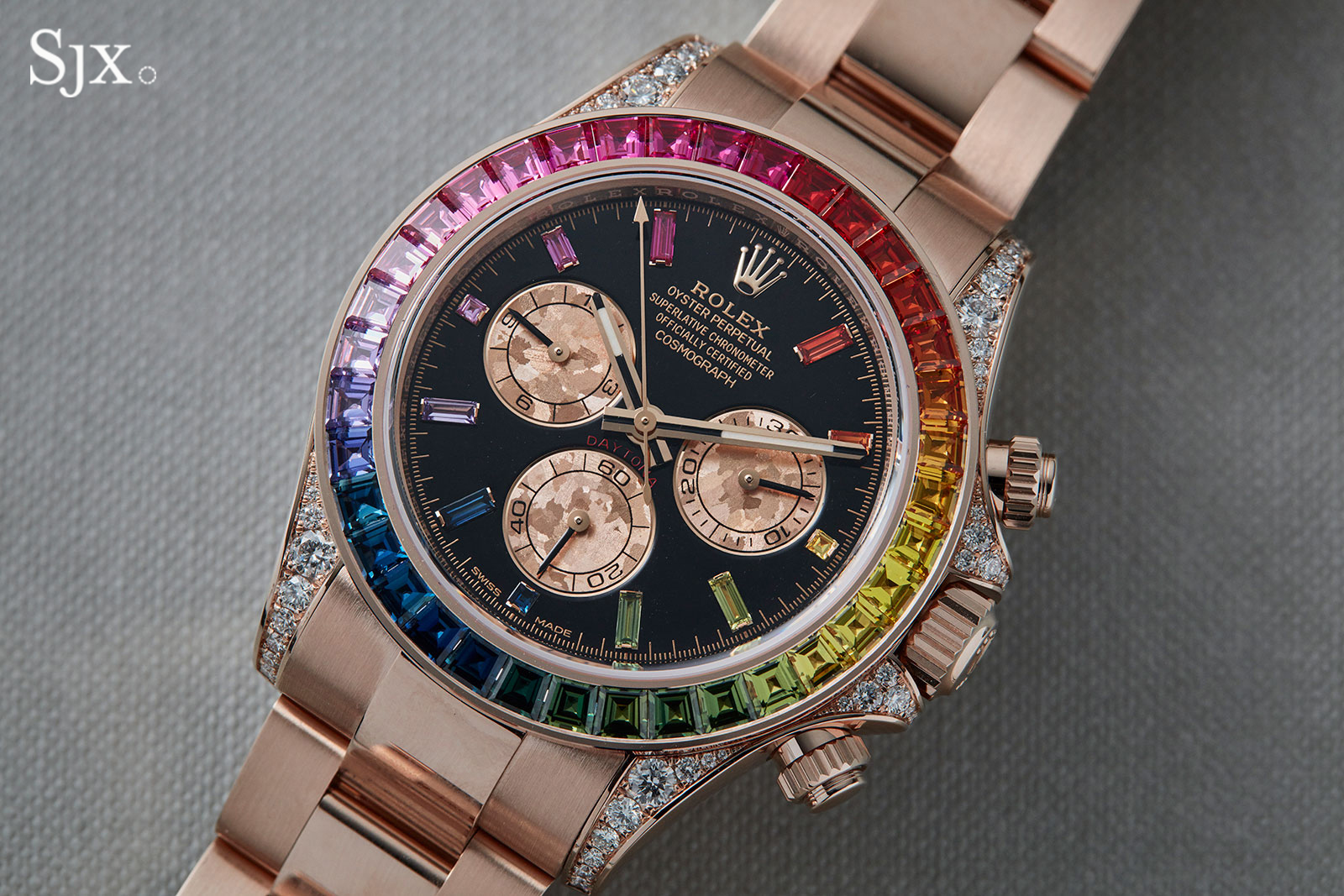 The bezel is set with 36 baguette-cut sapphires in graduated hues, starting with red at 12 o’clock, and transitioning to yellow, orange, yellow, green, blue and violet. The stones are splendid in colour; other watchmakers have done similar “rainbow” bezels but not quite as impressive. 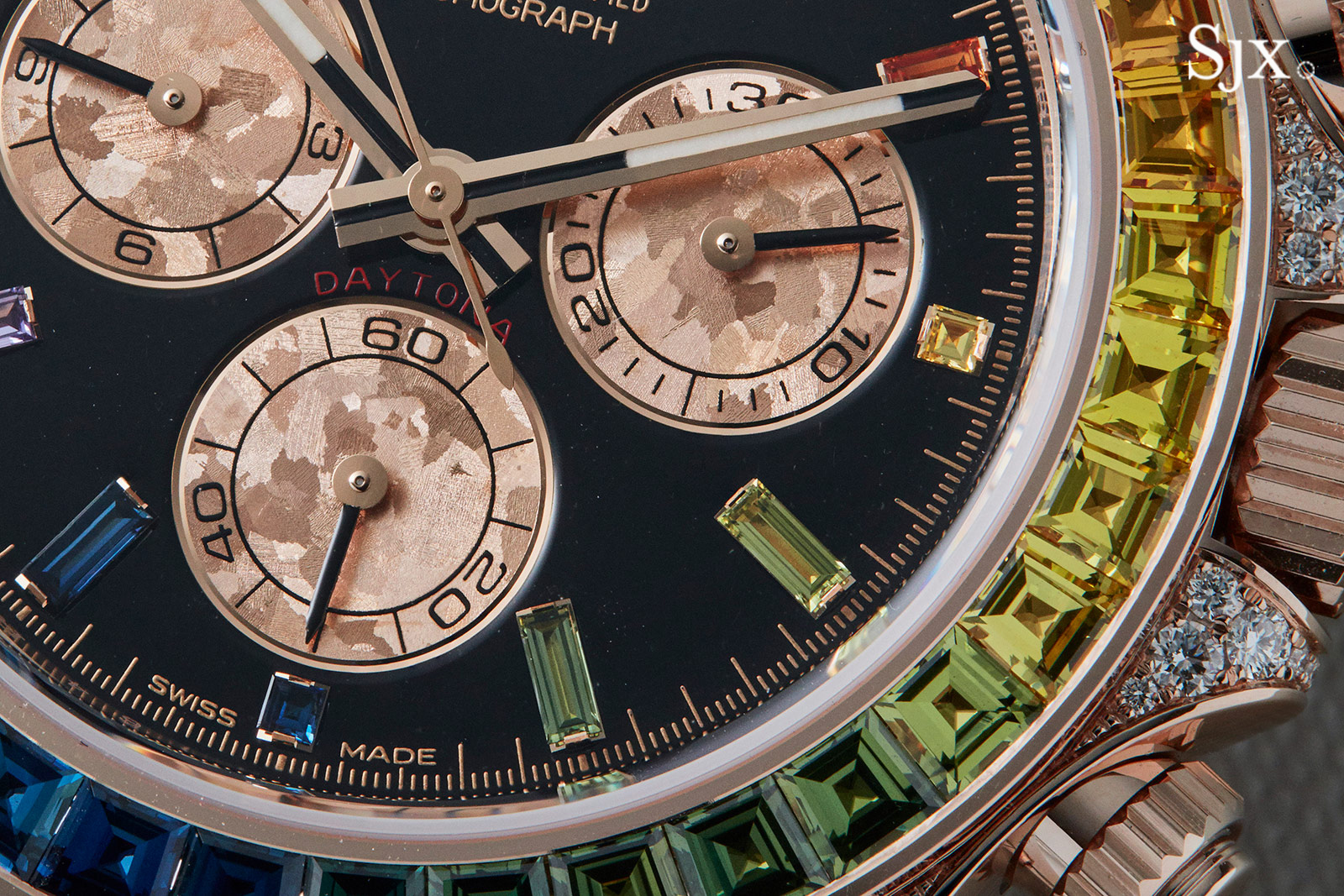 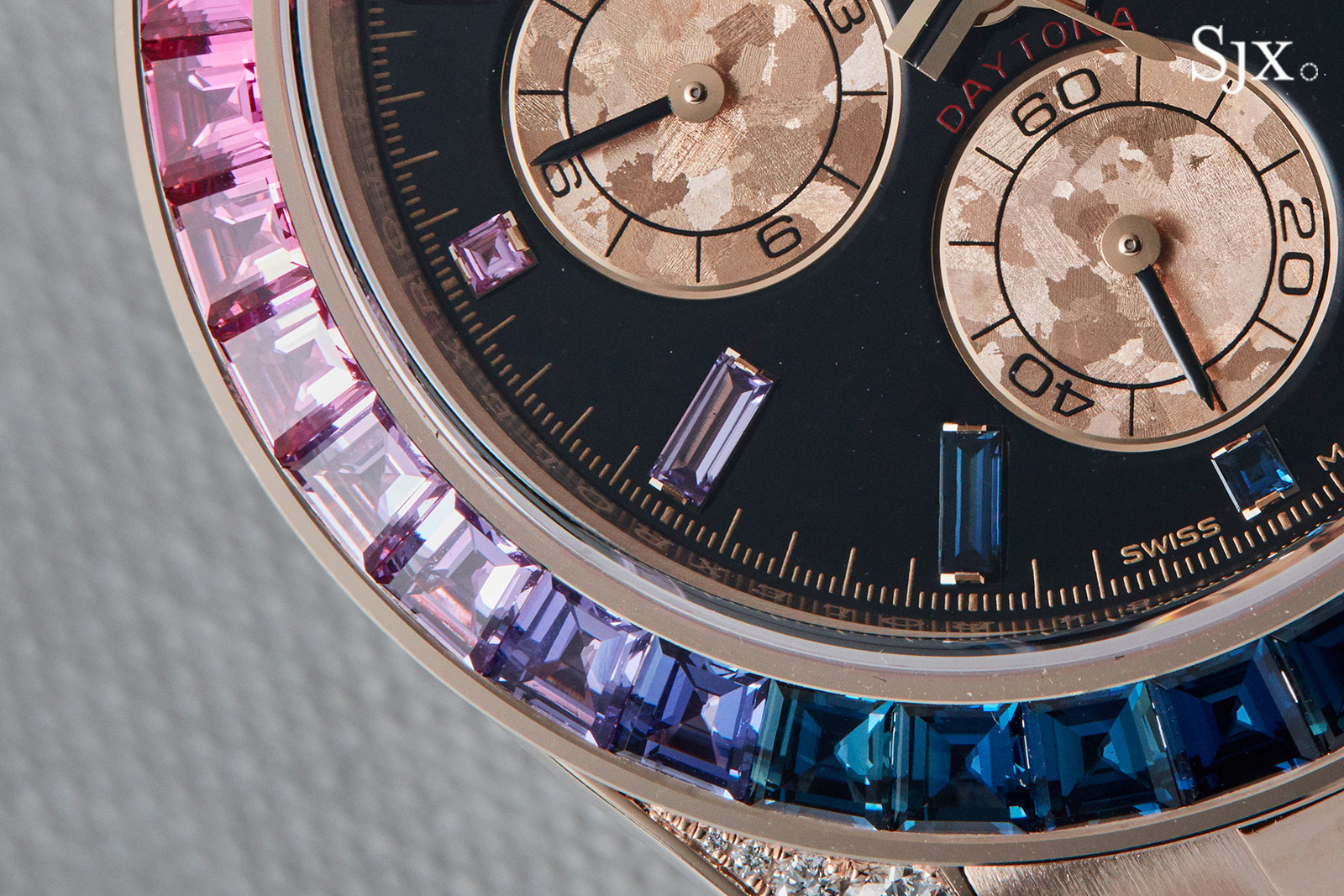 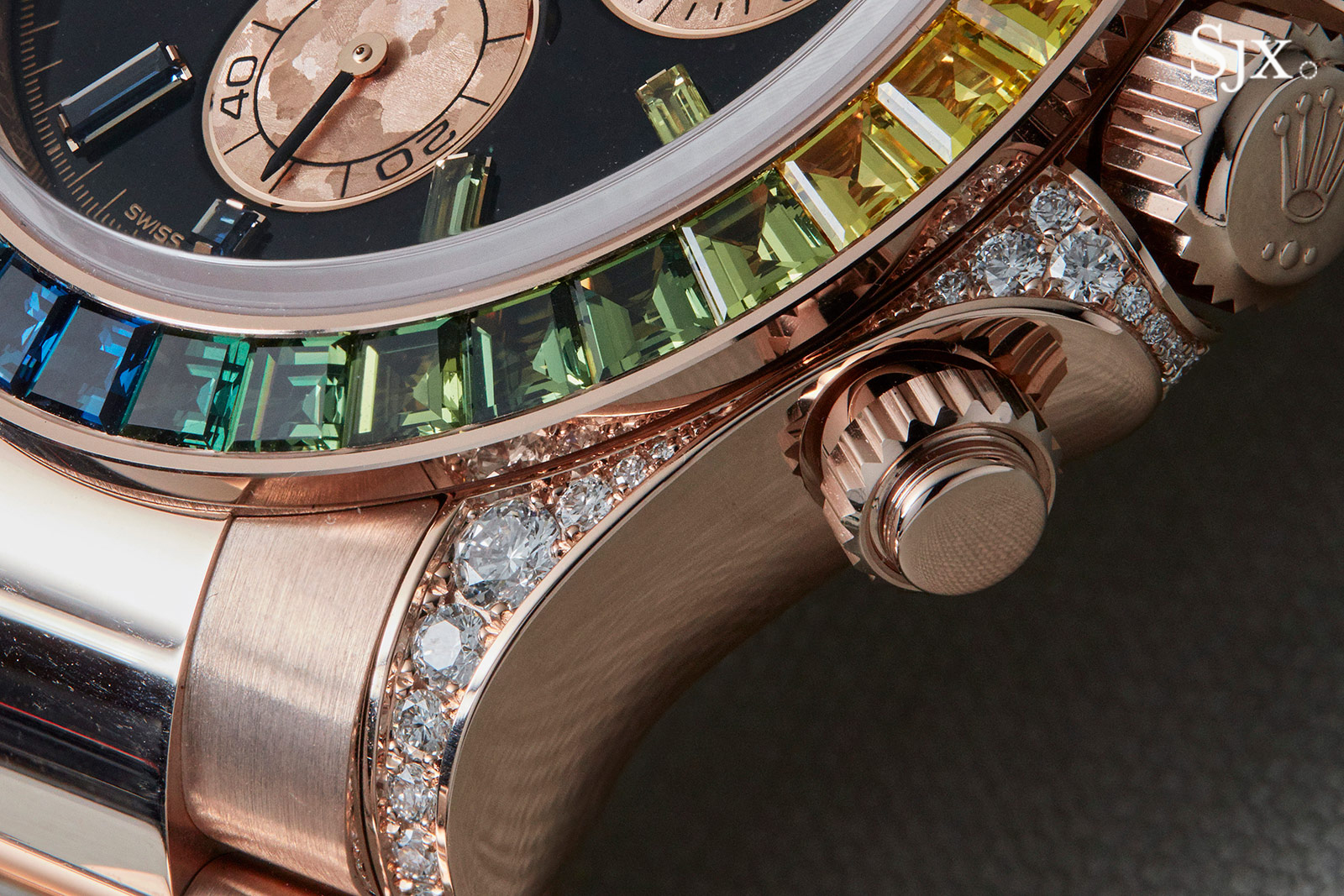 While the original Rainbow featured diamond hour markers, the new Rainbow uses coloured gemstones, with each hour marker being a baguette-cut sapphire that echoes the bezel. 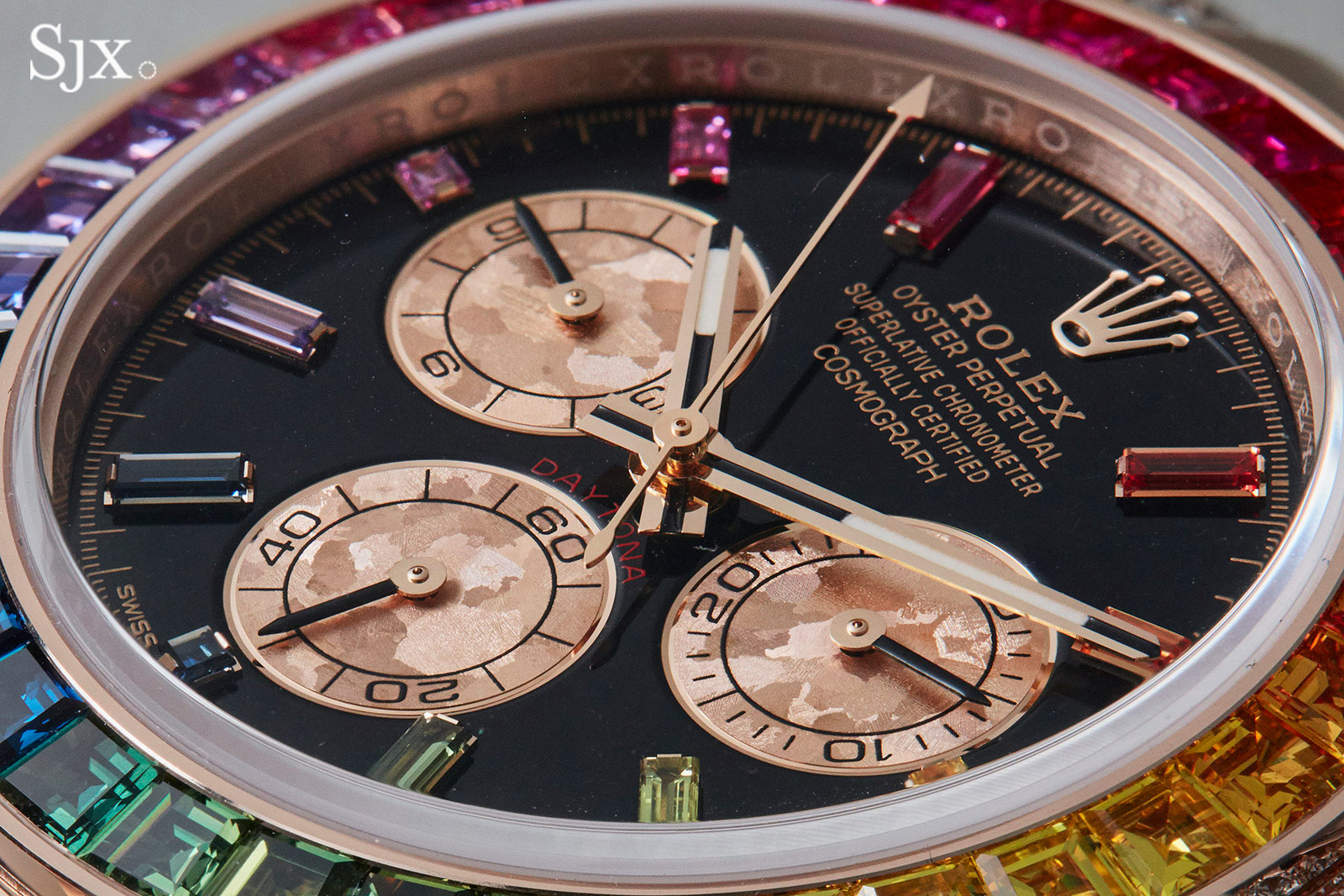 Inset onto the black lacquer dial, the chronograph registers are the same material as on the original Rainbow, being made of “Gold Crystals”. It’s actually a pink gold alloy treated to create a crystalline structure in the metal, giving it the appearance of semiprecious stone.

The lugs and crown guard are set with 56 brilliant-cut diamonds, though they seem almost like an afterthought compared to the party around the bezel. 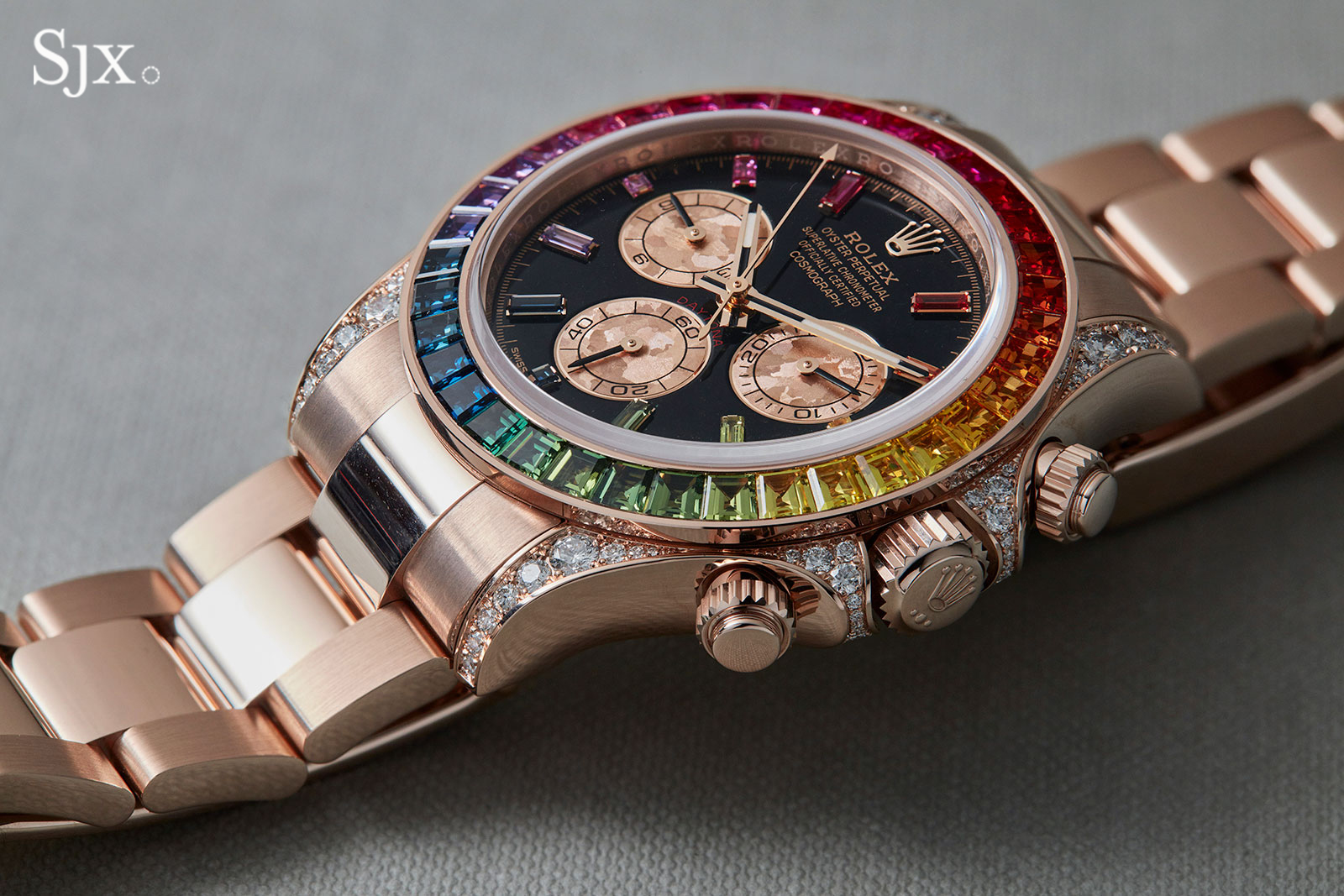 In the standard Daytona style, the 40mm case and bracelet are 18k Everose gold, Rolex’s proprietary rose gold alloy that’s fade resistant. And the movement is the cal. 4130, an in-house chronograph that’s regulated to -2 to +2 seconds a day, the norm for a Rolex “Superlative Chronometer”.

Like all Rolex movements the cal. 4130 is technically solid, with all the features expected of a modern chronograph, namely a column wheel and vertical clutch, plus a free-sprung balance wheel that’s standard Rolex. 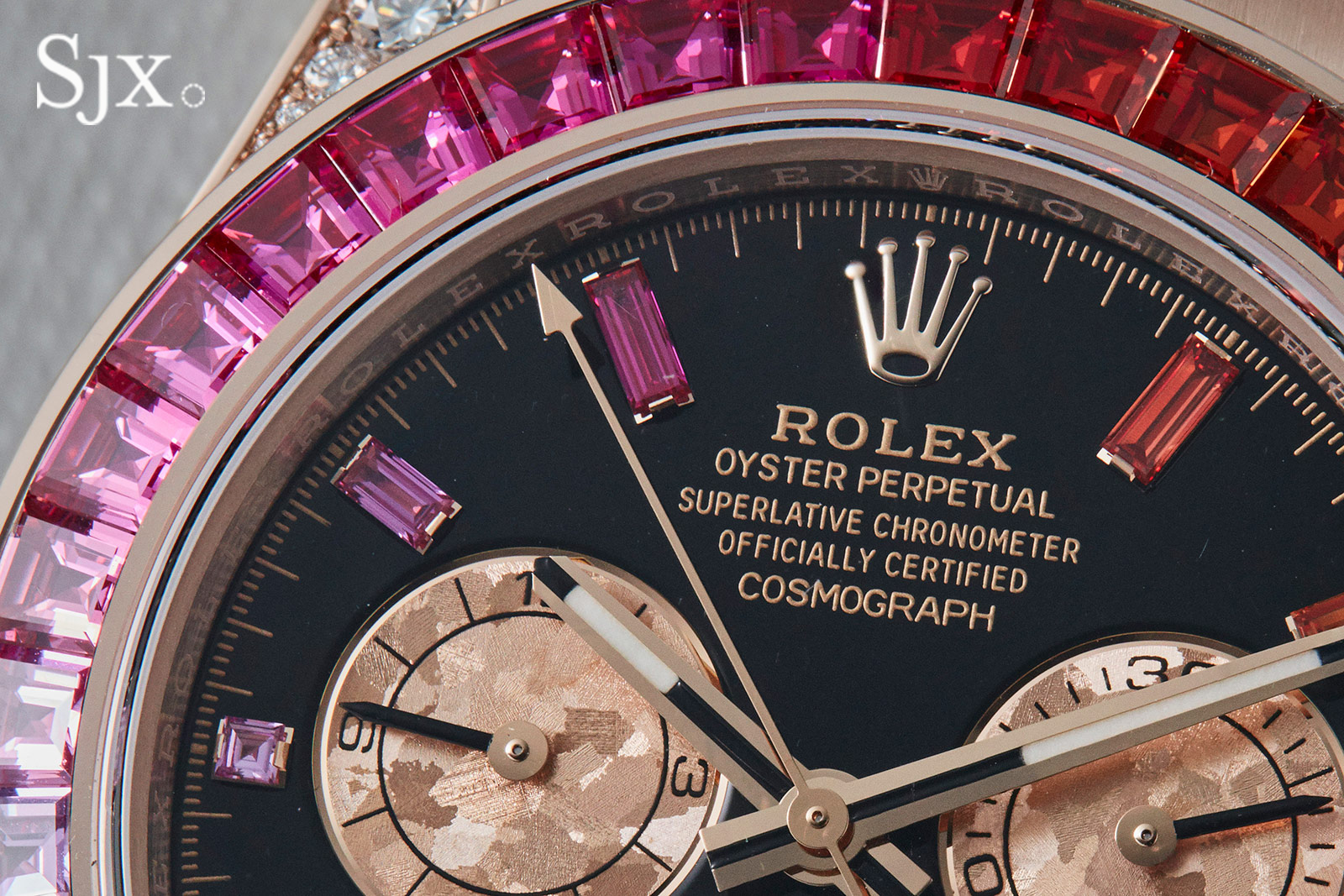 The new Rainbow will inevitably for a premium over retail, but it is difficult to conceive it will reach the same frenzied heights as for the first generation models. And might the Everose Rainbow cause values of its predecessors to soften? 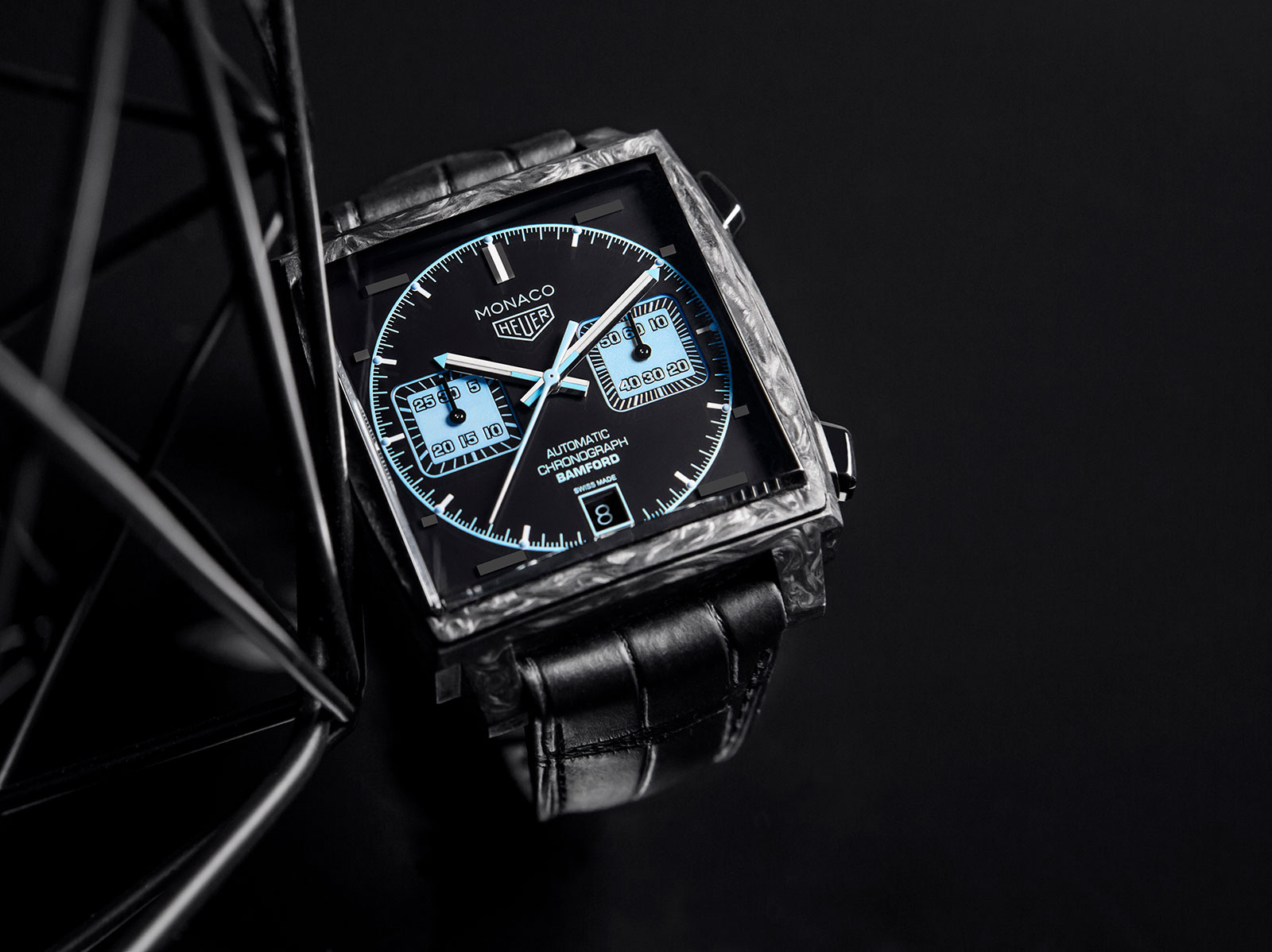 Historically an aftermarket customiser of Rolex watches, Bamford Watch Department recently got the seal of approval from establishment watch brands after inking an agreement with TAG Heuer and Zenith. Now the “authorised customiser” for the twin brands, Bamford’s first serially produced design for TAG Heuer has just been unveiled: the classic Monaco with an unusual carbon composite case.

Bamford’s all-black watches are traditionally black-coated metal, making the case material for the Monaco Bamford a novelty. It’s lightweight carbon composite, with the carbon fibres inside the polymer arranged at random, creating a marbled appearance. 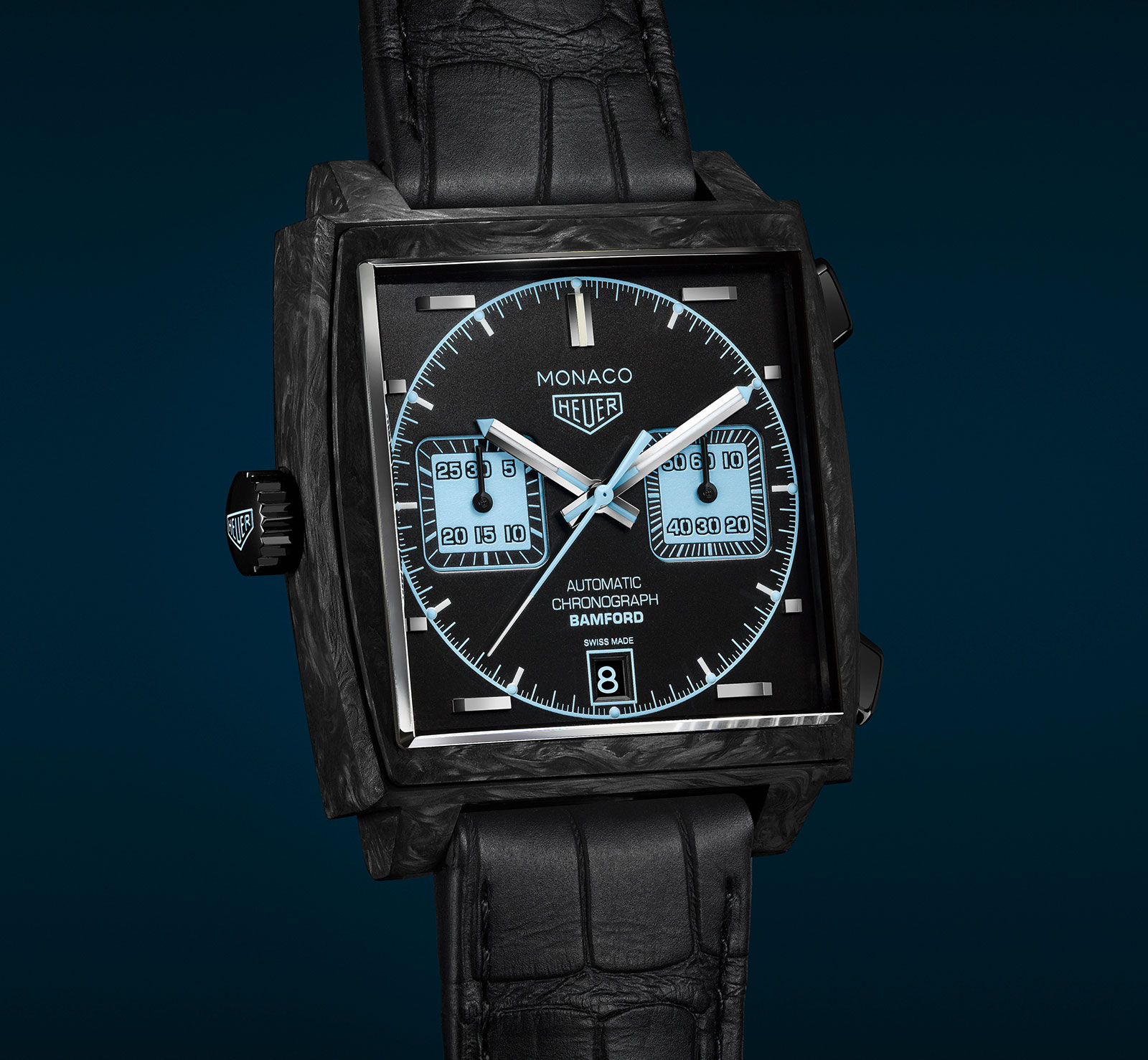 That’s matched with pale blue for the sub-dials, minute track and hands, as well as the logo on the crown – a colour combination that is typical of the high-contrast creations of Bamford Watch Department, founded by George Bamford, the son of English excavator tycoon Anthony Bamford. 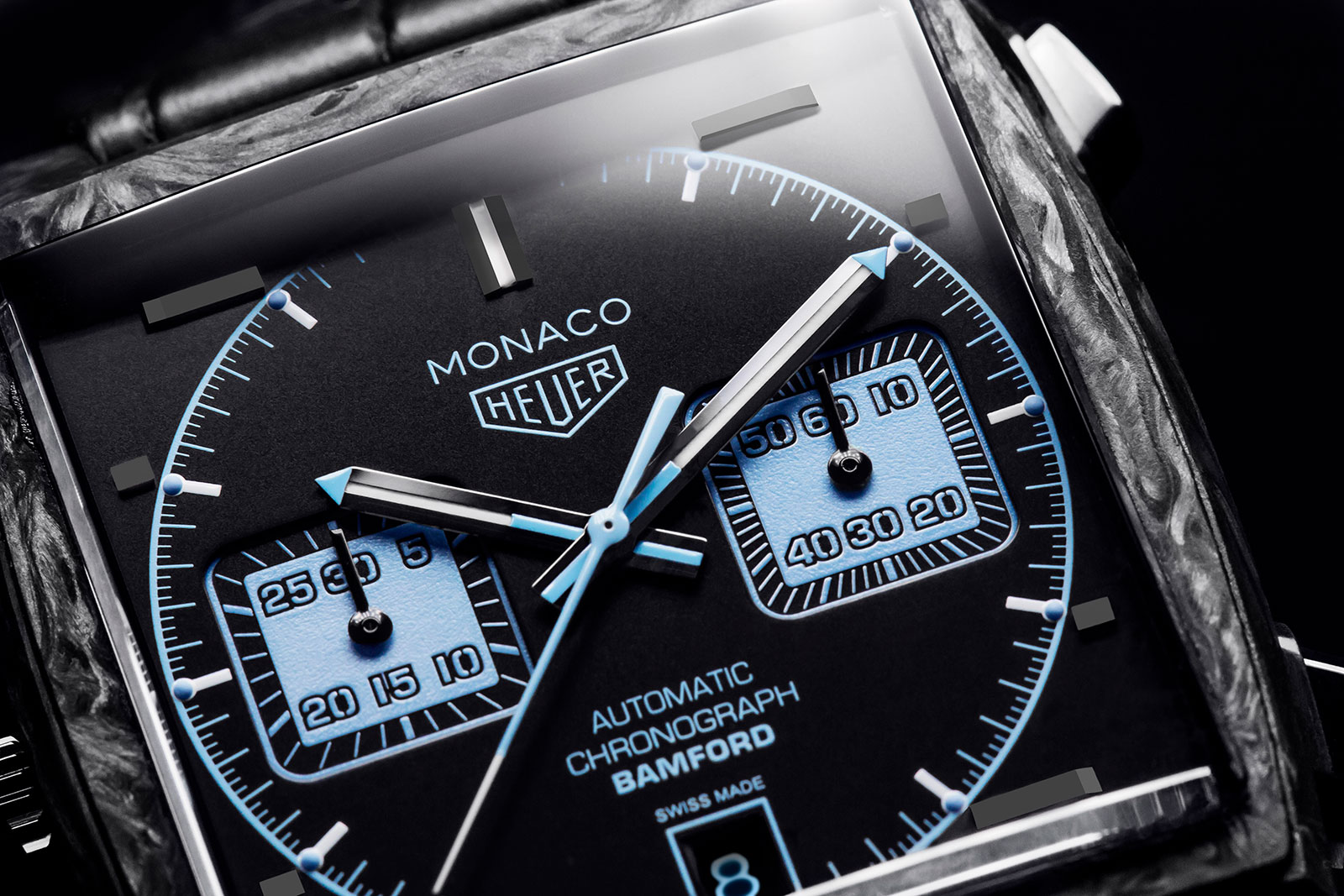 Though the material is new, the case is the same 39mm as the classic Monaco remake, and powered by the same Calibre 11. That’s actually an ETA 2892 with a chronograph module on top, as well as the crown sited on the left of the case to mimic the configuration of the Chronomatic Calibre 11 used in the vintage Monaco. 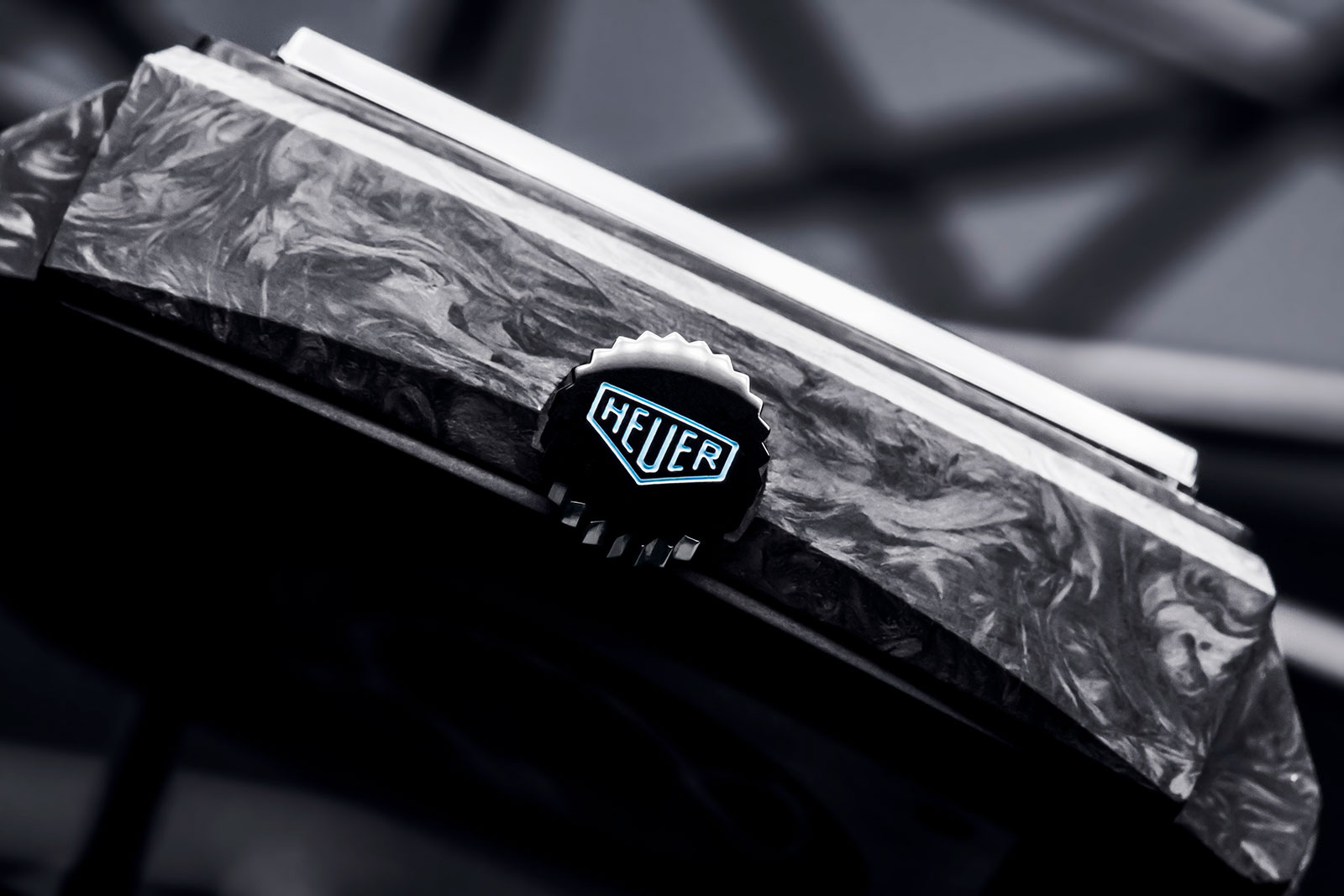 Correction March 27, 2018: The Monaco Bamford is a limited edition, and not part of the regular collection.