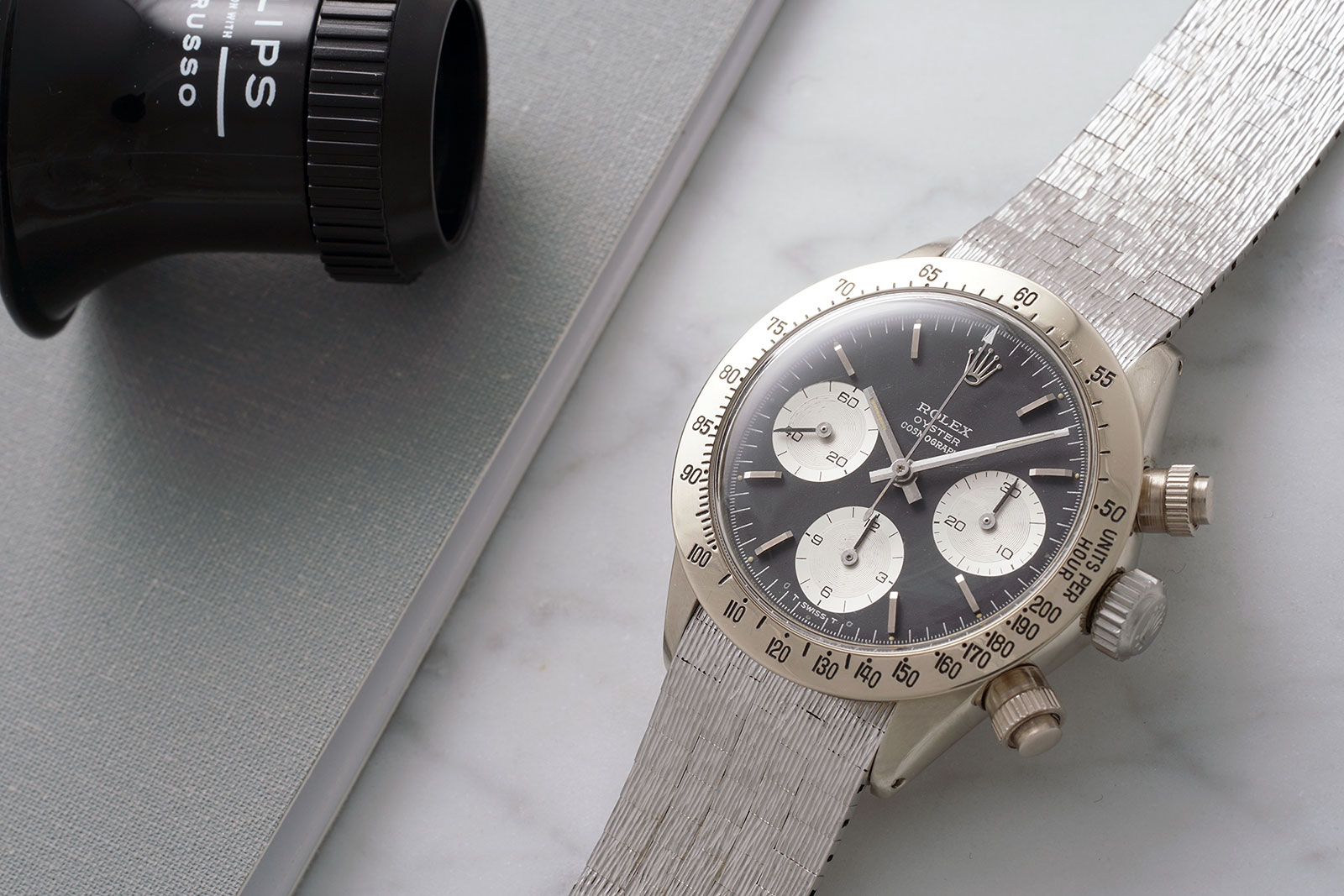 A “unicorn” that is nevertheless well known in the industry, the Rolex Cosmograph Daytona ref. 6265 in 18k white gold is the only one of its kind ever made, and it will be the headline lot in Phillips’ Daytona Ultimatum auction in May 2018.

Long the property of the Italian collector and author who goes by the nom de guerre John Goldberger, the white gold Daytona ref. 6265/9 was made in 1970 for a German retailer, and delivered a year later. Vintage manual-wind Daytona watches are typically steel or yellow gold (either 14k or 18k), occasionally bestowed with special dials or custom bracelets, making this white gold example significant – and inevitably expensive. The Daytona is fitted to an period correct, bark finish 18k white gold Rolex bracelet, though it was taken off an Oyster Date, and is not original to the watch. And intriguingly, the crown is steel. Mr Goldberger has generously agreed to donate proceeds from the sale to Children Action, a Geneva-based charity that has benefited from a notable number of unique or special watches sold at auction in the past. In fact, just the day after this Daytona is sold, the one-off, stainless steel Lange 1815 ‘Homage to Walter Lange’ will also be sold by Phillips, again to benefit Children Action, making it a good weekend for the charity.

The Daytona in white gold will be sold on May 12, 2018, at Daytona Ultimatum, which takes place at La Reserve in Geneva. The estimate is in excess of SFr3m. 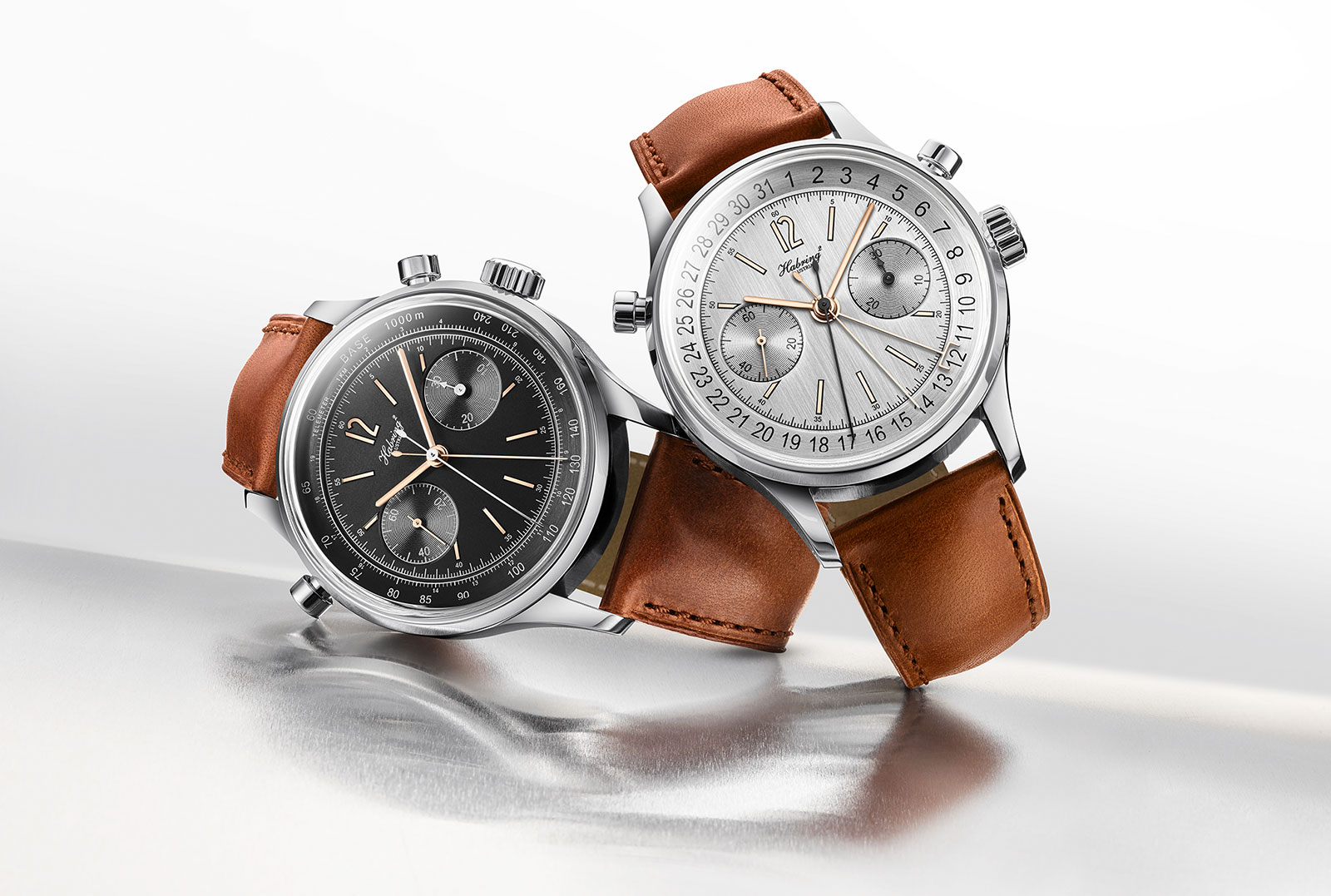 Introduced in 2014, the Habring² Felix was powered by the A11, a proprietary movement designed in-house that is loosely based on the reliable Valjoux 7750 but made up of custom-made components from specialists. Now the calibre has been repurposed as the base for Habring²‘s signature split-seconds chronograph, creating the Doppel Felix.

Based on the streamlined and affordable rattrapante mechanism Richard Habring helped design while he was at IWC in the early 1990s, the original Habring² split-seconds was based on a 7750 and brought the complication to the masses, priced at just under US$10,000. The Doppel Felix remains a strong value proposition, retaining the signature “bullhead” chronograph pushers as well as a similar movement construction.

The A11R movement inside the Doppel Felix is hand0wound and features the trademark split-seconds mechanism in its traditional position in the middle of the movement. It’s decorated slightly more elaborately than earlier generations of the Doppel, with several blued steel components as well as brushed or pearled finishes on various surfaces. Notably, the Felix Doppel is also available with a date display, a first for Habring². It’s indicated via a central pointer and an extra-large date track on the periphery of the dial. And the base model without a date has a telemetric track on the outer ring instead. Besides the date, the other option is the dial: either brushed silver or black, both matched with rose gold hour markers and hands. The steel case is 42mm, and like most of the rest of the watch, made in Austria.

The Doppel Felix rattrapante chronograph is priced at €7750 without date, or €8,250 with date pointer.

Introducing the Habring² Felix, Powered By A New In-House Movement

The calibre A11 makes its debut.