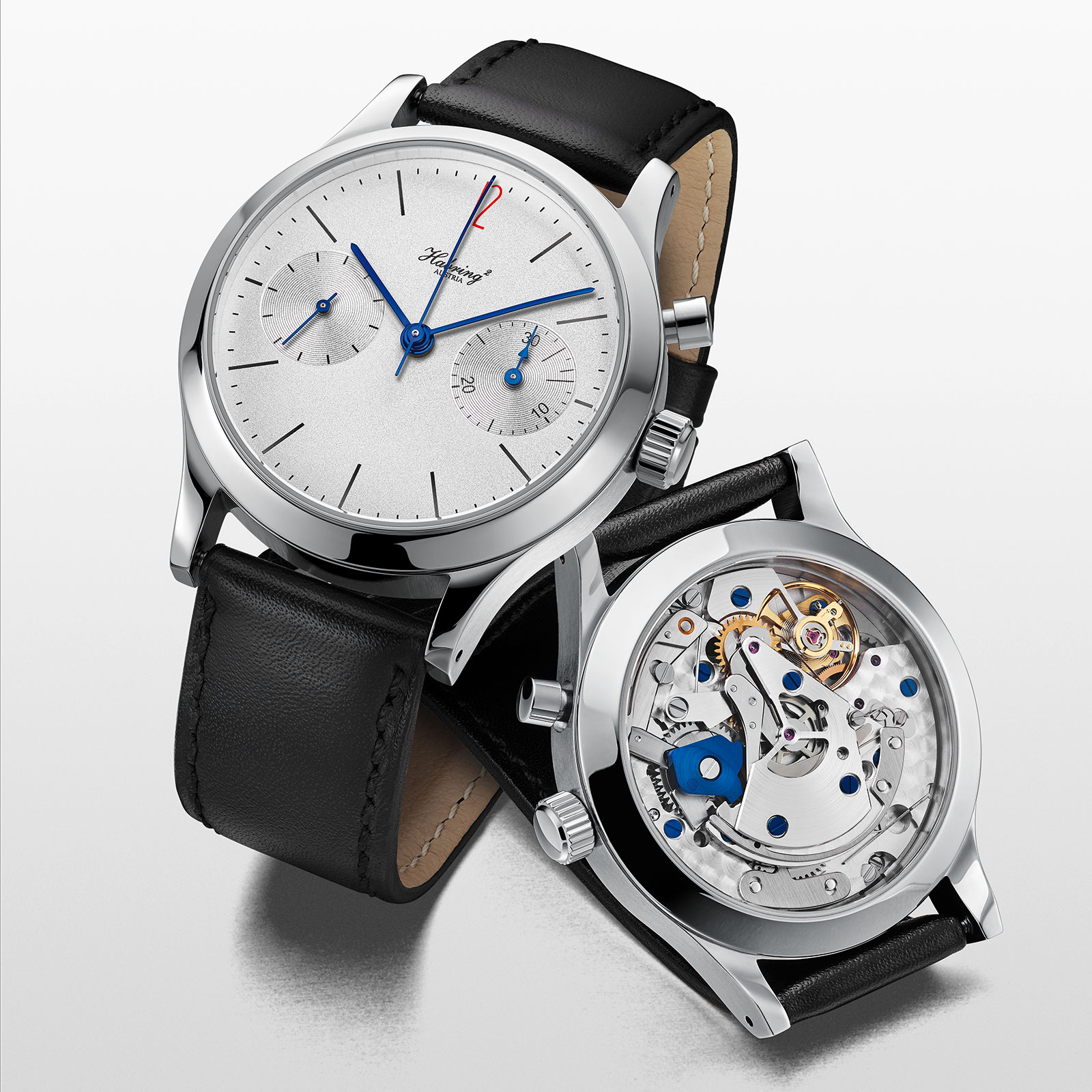 Like many of Habring²’s recent watches, the Chrono-Felix is smaller and slimmer than its earlier timepieces. The steel case is 38.5mm wide and 10.5mm high, relatively compact proportions for a modern chronograph wristwatch. It’s fitted with a domed sapphire crystal and rated to 30m. The dial is a grained silver with black markings, with the “12” available either in red or black. And the hands are offered either in glossy black or blued steel. A movement of one’s own

As with all of Habring²’s other proprietary movements, the A11B has its origins in the ETA Valjoux 7750, long the base movement of choice for Richard Habring. When he was at IWC in the 1980s and 1990s, Mr Habring used 7750 as the base for all manner of complications, most notably for his signature split-seconds and also a compact flying tourbillon.

But when ETA announced in 2011 that it would no longer supply movements and components, Habring² embarked on a journey towards self-sufficiency. Habring² used the basics of the robust 7750 as a starting point, but tweaked and improved the design, including “[optimising the movement] for production in small quantities”. That resulted in the time-only A11 movement, found inside the Felix wristwatch of 2014. All of the components inside the A11 are produced by independent parts suppliers, with nothing coming from ETA. The hairspring, for instance, is made by Carl Haas, a German producer of wires and composites.

Similarly, the A11C-H1 chronograph movement is Habring²’s own. According to Habring², “we have modified [the lever and wheel works] to certain extent… [making it] easier to produce, easier to finish, easier to service”. At 6.5mm in height, it’s notably thinner than the 7mm high Valjoux 7760 (which is the manually-wound version of the 7750). Habring² has also decorated the movement to an appealing degree, with circular graining on the bridges and perlage on the base plate, along with a blued steel chronograph cam. All of the steel levers for the chronograph are finished with straight graining and bevelled edges.

However, Habring² is careful to point out at the initial run of Chrono-Felix watches will contain A11C-H1 movements that still rely on chronograph wheels from ETA. That is only because Habring² still have a stock of these components, but once they run out, the A11C-H1 will be made up of parts exclusively from Habring²’s own suppliers.

The Chrono-Felix is priced at €6250, with deliveries starting in September 2018. It’s available either direct from Habring² or any of its retailers.