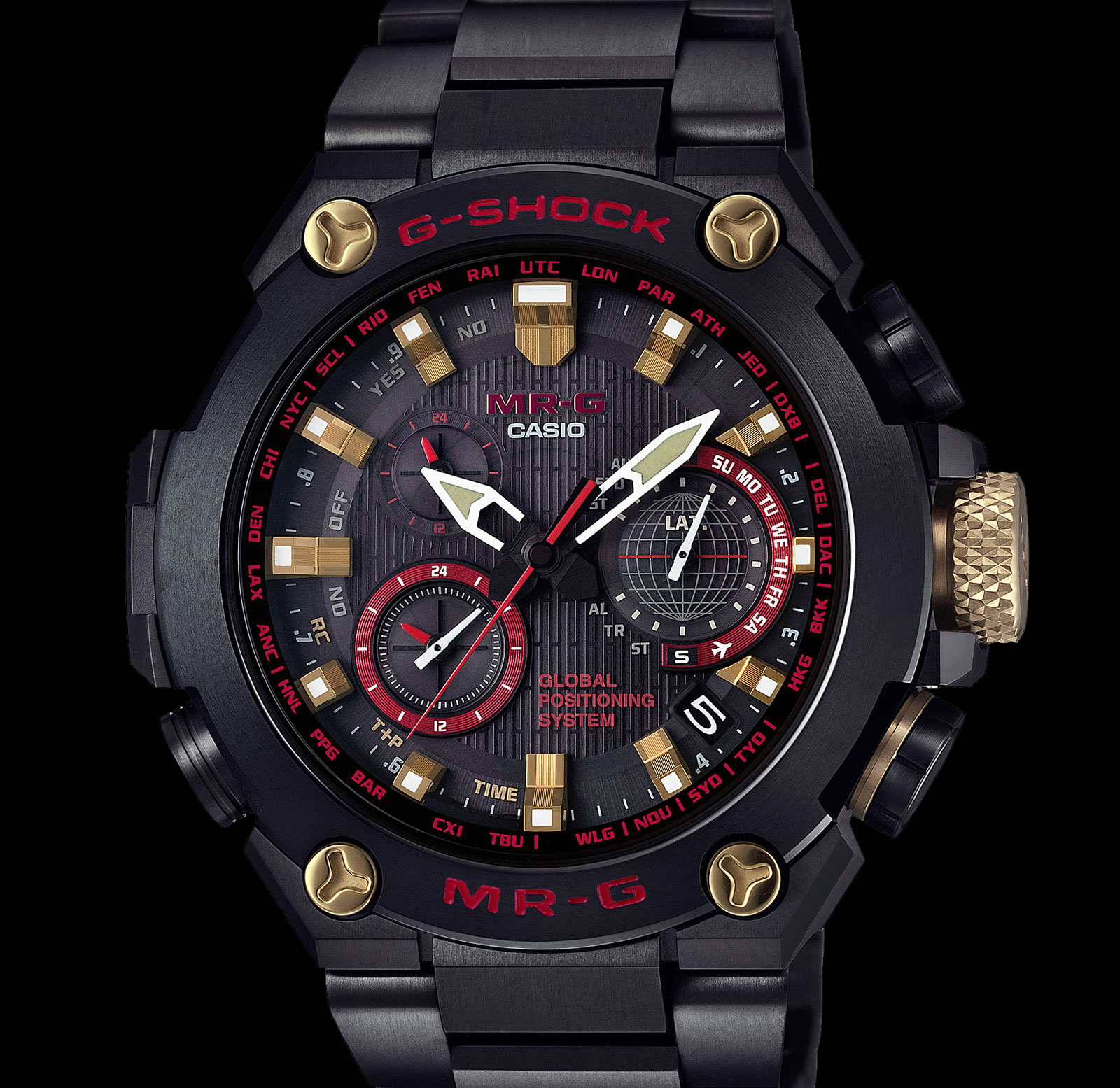 “Iconic” is a label often overused and misused when it comes to watches, but in the case of the G-Shock it’s apt. Invented over 30 years ago by engineer Kikuo Ibe, the Casio G-Shock has just hit the cumulative 100m milestone – that’s 100,000,000 – with the 100th millionth watch having just rolled off the production line at end August. It’s a remarkable achievement for a watch designed with construction workers in mind, and one that was developed by throwing the prototypes out of a third floor toilet window.

Over 2000 different models of the G-Shock have been produced since its introduction in 1983, and it’s still going strong, with one of the most recent being the hand-decorated MR-G Indigo Hammer Tone Kasumi-Tsuchime. The remarkably robust G-Shock is found on the wrists of astronauts and special forces soldiers, yet is versatile enough to become the subject of collaborations with pop artists and streetwear labels. The appeal of the G-Shock is remarkable and almost price-agnostic. Even the entirely gilded MR-G Hammer Tone that cost over US$6000 was sold out shortly after its launch. The growth in G-Shock sales has been exponential. Casio shipped a total of 10m G-Shocks by 1997, fourteen years after its launch. Only 13 years later the tally had reached 50m, and a mere seven years later the number had doubled to 100m. A billion G-Shocks would not be inconceivable within the lifetimes of many people reading this. Produced at the Casio factory in Yamagata, located in northeastern Japan, the 100th millionth G-Shock was one of the top of the line MR-G models, the “Akazonae” (ref. MRG-G1000B-1A4), pictured at top. Made entirely of titanium and features red accents on the dial, the MR-G “Akazonae” was inspired by the red lacquered akazonae armour often worn by elite samurai. The case back of the milestone watch was engraved 100,000,000 to commemorate the occasion, though the watch itself is not for sale.

Correction September 12, 2017: The 100th millionth watch is not for sale, contrary to an earlier version of the article. 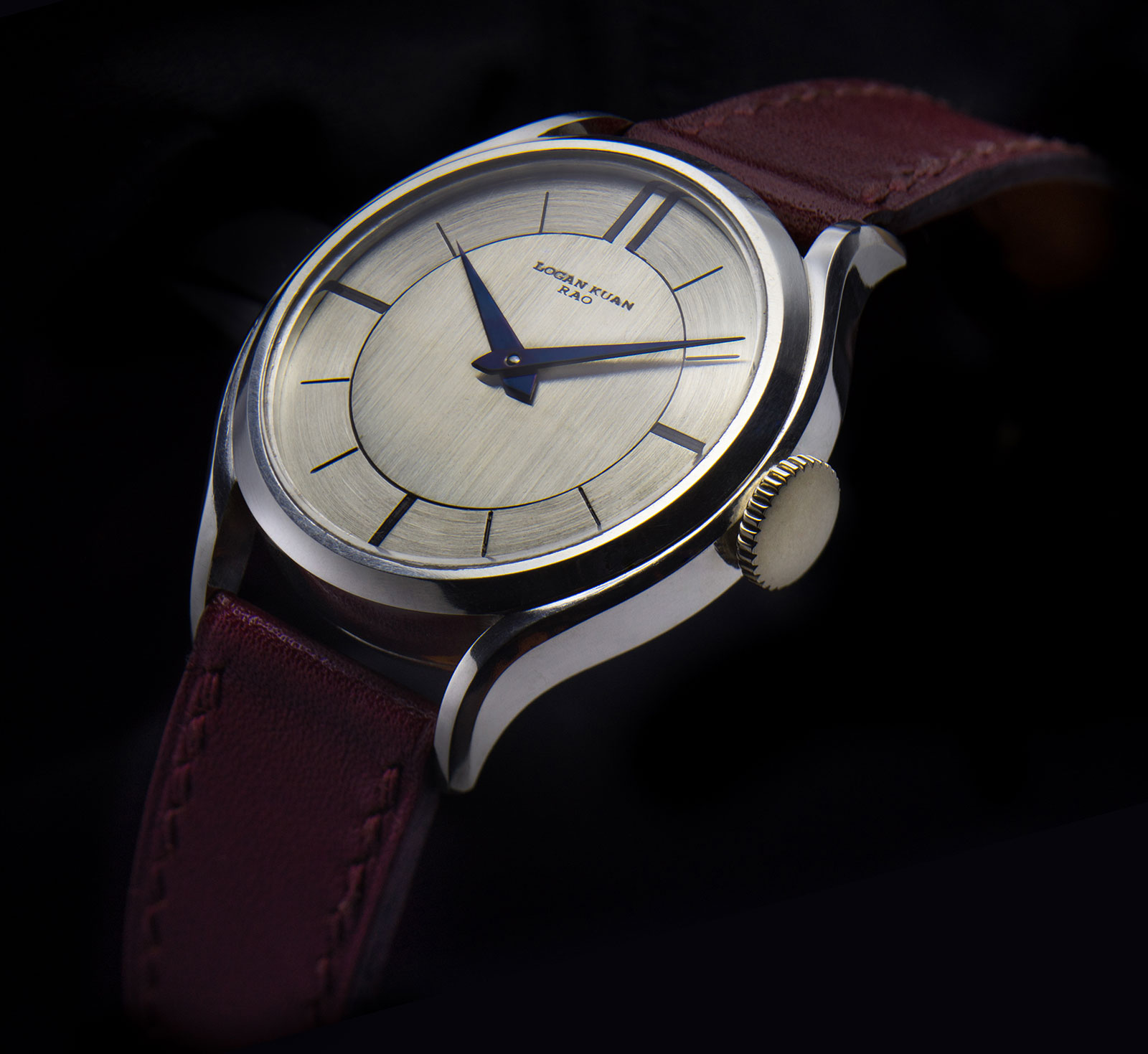 On his way to completing an undergraduate degree in materials science at Imperial College London, Logan Kuan Rao has already finished his wristwatch prototype, several months before graduation. Named the Orca after the design of the movement, the watch was made almost entirely from scratch with traditional methods, save for the case, which was 3D printed in sterling silver.

Born in the city of Shantou in the coastal city of Guangdong, Rao’s path to independent watchmaking began with a childhood interest in the subject that later led him to become a moderator on a Chinese watch forum. While at university in London Rao set up a workshop to produce his first wristwatch, completing the first prototype in 2016. Now the second prototype has been finished – though the final product is still two years away – bringing Rao’s vision closer to reality. An early Orca prototype (top), and the most recent

As with many other self taught watchmakers, George Daniels seminal Watchmaking was foundational, according to Rao, with trial and error as well as his engineering background providing the rest of his horological education. The culmination of that education is the Orca, a hand-wound wristwatch with a 50-hour power reserve.

With both of his parents architects, Rao’s goal with the Orca was to design a watch that would be as timeless as a well designed building. The result is a simple design ith intriguing details. Inspired by the orca, the movement has the wheel train bridge shaped like the killer whale, with the Cotes de Geneve representing the ocean’s waves and the perlage the foam. The orca bridge is made of sterling silver, while the main plate and remaining bridges are in German silver. Notably, much of the movement was hand-made with traditional techniques, without the aid of CNC machines. The jewels, hairspring, mainspring, wheels and shock absorbers were obtained from a watch manufacturer in northern China whose owner Rao is well acquainted with. All of the components are decorated with traditional techniques, including polished, bevelled edges for the bridges, countersinks for the jewels and screws, and black polishing for certain steel parts. Pictured here is the second prototype, the finished product is expected to be significantly more refined. The bridges and base plate were made with the techniques explained in the Daniels book: the holes were positioned by a depthing tool and then drilled, before the entire part was sawn out and then filed into shape. The depthing tool used to position the holes in the plates

The lack of visible jewels was a design choice. Rao explains that the jewels are set deeply and the smallest diameter possible, leaving them almost invisible, so as not to detract from the overall shape of the bridges and orca. More unusual is the case, which is 37mm in diameter and 7.8mm high. It’s 3D printed sterling silver, a process inspired by his time as a student at Imperial College. After the raw case has been printed, Rao tempers it and then polishes it by hand. The case is made up of two pieces, a case middle with an integrated bezel and the case back, creating a seamless and simple style that was Rao’s objective with its design. The dial is German silver with the hour markers being first shallowly engraved and then filled with black lacquer, while the hands are blued steel, and hand-made naturally. With his recent graduation, Rao has moved his workshop back to Kunming, with plans to set up a larger facility in the manufacturing hub of Guangzhou in two years. The Orca is still a work in progress – only two prototypes have been completed to date – and Rao expects the first commercially available piece to be ready in 2019 or so. Planned as a limited edition of nine pieces, the Orca will be priced at approximately US$19,000.

Logan Kuan Rao can be reached via email.

Correction September 11, 2017: Logan Kuan Rao is still studying for his undergraduate degree, and has not yet graduated as previously stated. Also, he is from Shantou, and not Kunming. 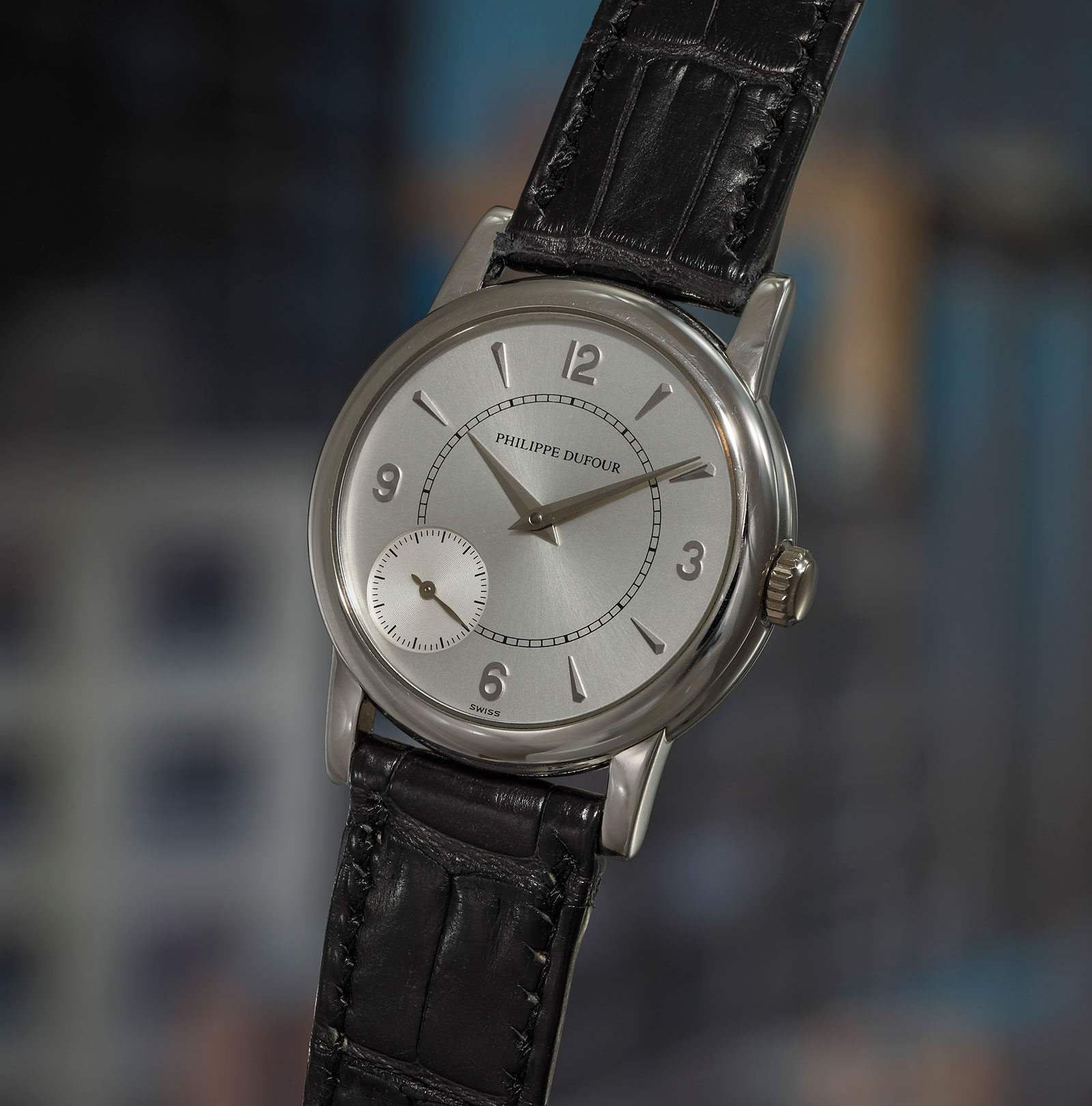 Phillips‘ inaugural New York watch auction in October has grabbed headlines for the Rolex “Paul Newman Paul Newman” Daytona, but fortunately the sale will also include examples of fine watches for collectors who are otherwise inclined. Arguably one of the most significant contemporary watches in the sale is the Philippe Dufour Duality no. 00 in platinum. It will only be the second instance a Duality has been offered at auction, though strictly speaking it will be the only one that’s ever surfaced publicly, since no. 00 the same watch that was sold previously.

Perhaps Dufour’s most interesting and definitely his least understood watch, the Duality was launched in 1996, four years after Dufour unveiled his grande et petite sonnerie wristwatch, and a few years before his famous Simplicity. Equipped with twin balance wheels linked by a differential, the Duality is amongst the watches cited as the basis for the recent MB&F LM2 and Greubel Forsey Double Balancier.

Though double regulator watches have a long history going back to the 19th century with Abraham-Louis Breguet and Antide Janvier, Dufour’s inspiration for the Duality was more recent: a 1930s double regulator pocket watch made by a student, or students, of the Ecole Polytechnique de la Vallée de Joux (EPVJ) and the Ecole d’Horlogerie of Le Sentier – Philippe Dufour’s home town. It is believed only 10 or so such pocket watches were made by pupils at the technical colleges during the 1930s. An example of a double balance movement movement made by a student of the Ecole d’Horlogerie in Le Sentier, circa 1931. Photo credit Musée international d’horlogerie (MIH)

The premise of a double regulator is better timekeeping by averaging down – each escapement ticks independently, but the potential errors in each are averaged down thanks to the differential linking the two. A surprisingly complex creation – the differential alone is 21 components – the Duality movement is nonetheless compact and thin. The watch itself is a mere 34mm in diameter. Originally envisaged as a series of 25 watches, the Duality stopped at nine watches. Amongst the reasons Dufour has cited over the years for discontinuing the Duality was the fact that F.P. Journe was making the Resonance – a superficially similar watch but one operated on completely different physical principles – as well as the fact that he had the Simplicity wristwatches to deliver.

The platinum case no. 00 that will go under the hammer in New York is the very first Duality ever made, and the same watch that was sold at Christie’s almost exactly 10 years ago for SFr180,000, or about US$190,000 at today’s rates. Complete with the original boxes and paperwork, the Duality is being sold by the noted collector who purchased the watch at Christie’s and who also kindly granted permission to publish this news.

The estimate on the Duality is US$200,000 to US$400,000, and it will be sold during the New York auction on October 26, 2017. With the three examples of the Simplicity each having achieved just shy of US$260,000 at auction last year, the Duality should finish comfortably north of US$400,000 fees included, even passing the half million mark on a good day.

Photos of the watch on sale will be available once the auction catalogue is published.