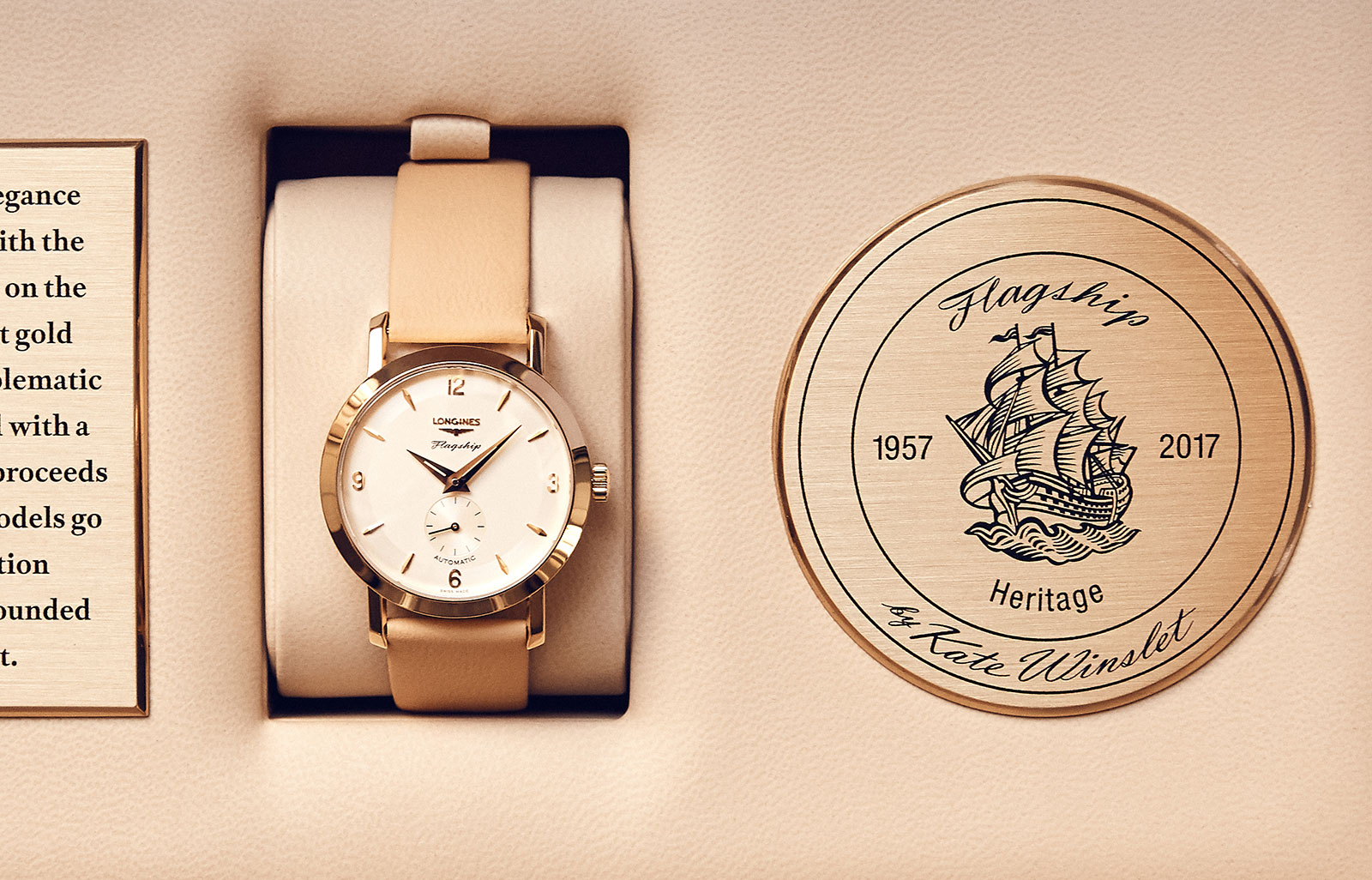 The British actress best known for her role in Titanic visited Longines in Saint-Imier last May and picked out a 1950s Flagship wristwatch from the watchmaker’s museum collection, which has now been turned into a five-piece limited edition for charity.

Three of the watches produced – the Longines Museum gets no. 1/5 while Winslet receives no. 5/5 – will be sold online with all proceeds going to The Golden Hat Foundation, an autism charity Winslet established in 2010. Fitted with a two-tone silvered dial featuring applied markers and dauphine hands, the watches are similar to the Flagship Heritage 60th Anniversary editions introduced at Baselworld 2017, but closer to the vintage original in size, being 18k yellow gold and 35mm in diameter. The movement is a modern day cal. L609, which is an ETA 2895/2. Bidding for each watch starts at US$25,000 and the winning bidders will receive the watch from Winslet herself at her next public appearance with Longines. The auction takes place from June 10 to 30, 2017. Bids can be submitted online via Longines. 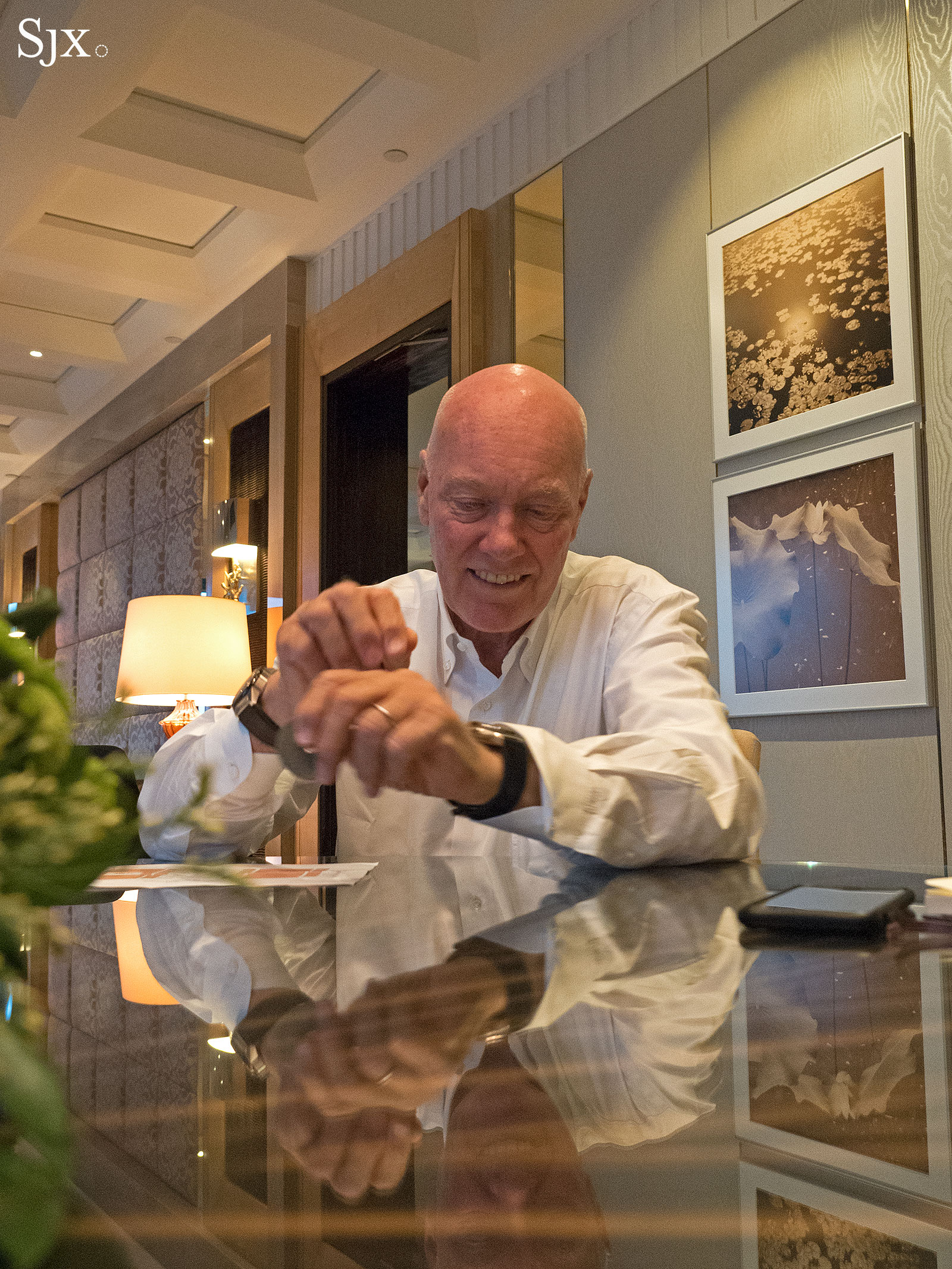 At Baselworld 2017 Jean-Claude Biver was just two months into his role as interim chief executive of Zenith but he was wearing a remarkably intriguing wristwatch that was shown only to a handful of people – the Zenith Defy Lab.

Having neither a balance wheel or hairspring, the movement relies on a rapidly vibrating, tensioned silicon component to keep time. Appearing to rely on mechanical principles explored in prototype movements like the Parmigiani Senfine and De Bethune Resonique, neither of which appear close to serial production, the new Zenith calibre will make its debut in September 2017 as the limited edition Defy Lab in the ultra-light Aeronith alloy before becoming widely available next year.

Here’s the scoop on the new calibre, excerpted from a recent interview with Jean-Claude Biver conducted in Singapore. The full interview will be published later this month.

Jean-Claude Biver (JCB): It’s a regulator that has no hairspring, no balance wheel, needs no oil, where friction does not exist, and is accurate to one second in 24 hours – the most accurate mechanical watch ever.

It’s the first time since 1656 [when Dutch scientist Christian Huygens invented the pendulum clock] that there is a new technology in regulators. I said before Zenith is the future of tradition. Tradition was Huygens with the pendulum and we are doing the future.

It’s a world first that will be launched September 14, 2017 in a museum in Munich [Ed’s note: Deutsches Museum], because the Germans are crazy about accuracy and precision.

First, we will create 10 unique pieces with this new regulator. Each collector who wants to buy cannot get the watch unless he flies to the factory. And included in the price is a first class air ticket. And I will hand it over directly to him when he comes over to Switzerland. So whoever buys the watch cannot get it from a retailer, he can only get it from me.

The watch will be affordable and priced between SFr8000 to SFr9000, excepting the first 10 unique pieces that will cost approximately SFr30,000

But the final watch, which will be launched at Baselworld 2018, will retail for around 8000, 9000 Swiss francs. So those will be in the normal Zenith price range.

This new material is huge. I can tell you now how this material is made. It is based on the principle of a sponge. What is special about the sponge are the holes inside. And when you put the sponge in water, the water fills the inside and the sponge becomes much heavier.

If we make an alloy of aluminium and have the inside like a sponge, what will happen? You will weaken the aluminium. Aluminium is already very fragile. But can we make holes inside but make it very hard like carbon [composite]? A disc of the new aluminium composite

Now you see it looks a little bit black because of the resin. But we can make it red [or any other colour]. It will be used in the new Defy case. 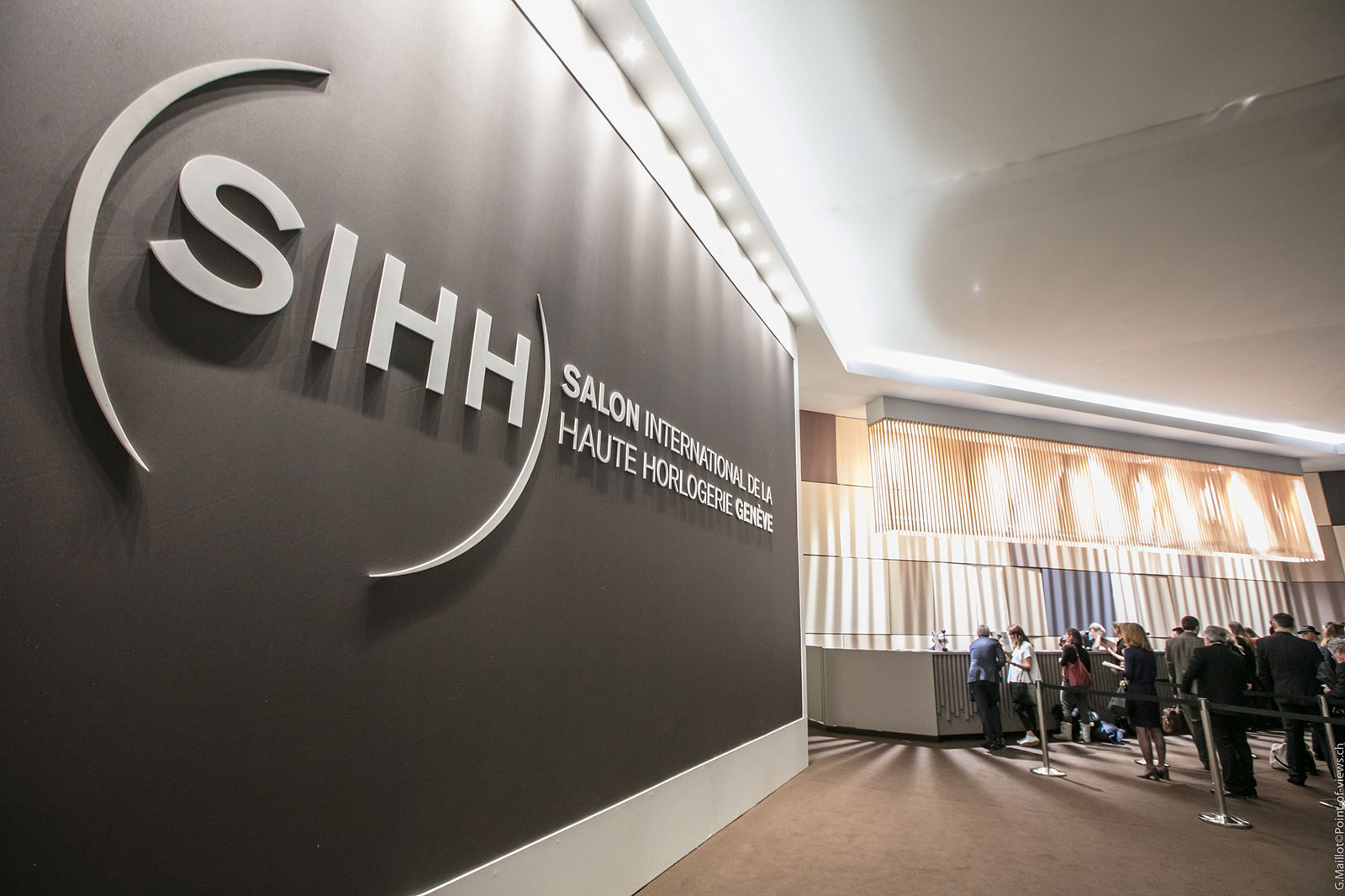 Starting in 2016, the stiffly formal Salon International de la Haute Horlogerie (SIHH) started to loosen up with the inclusion of independent watchmakers in an area known as the Carré des Horlogers (“square of watchmakers”).

Historically dominated by high-end brands and those owned by Swiss conglomerate Richemont, SIHH will expand the Carré des Horlogers next year, with the latest additions being DeWitt, Ferdinand Berthoud and Romain Gauthier.

At the same time, the main hall where brands like Cartier, IWC and Panerai show their wares, will also sees Hermès set up shop. This brings the total number of exhibiting brands in both the hall and Carré des Horlogers to 34.

And the final day of the show will be open to public once again, albeit for a modest entry fee that was SFr70 this year.