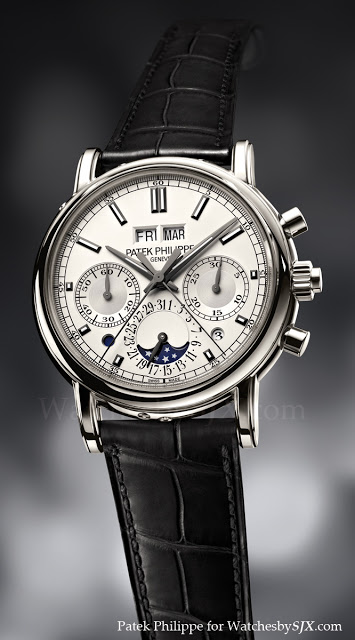 Replacing the long in tooth ref. 5004, the new platinum cased 5204P is a split seconds chronograph with perpetual calendar, based on Patek Philippe’s in-house CH 29 movement. In contrast to the elegant and beautiful 5940J perpetual calendar also launched at Baselworld 2012, the new 5204P rattrapante is a not particularly handsome. The luminous dial and hands are inappropriate for suc a watch in my opinion. They are, unfortunately, ugly. The fact that the dial is solid gold doesn’t help its aesthetics. That being said, the movement is impressive, both in terms of construction and finishing, as is expected for Patek. It uses the in-house CHR 29-535 PS Q, building on the CH29 movement used the ref. 5170J and ref. 5270G. This is quite an improvement over the Lemania 2310-based ref. 5004.

One reason being that the Lemania 2310 was never designed to have a split seconds module added, so it was delicate and sometimes unreliable. On the other hand the CH 29 is designed to be far, far more robust, according to what Philippe Stern related to me a few years back.  In particular, the new design for the split seconds isolator is slimmer and more reliable than the isolator with the octopus wheel in the ref. 5004. Also, because of a redesign split seconds lever and cam, the position of the two central seconds hands are far more precise in relation to each other when reset to 12 o’clock, a 75% improvement according to Patek. This CHR 29 calibre will undoubtedly be in production for a long, long time, so there’s hope for a redesigned dial. 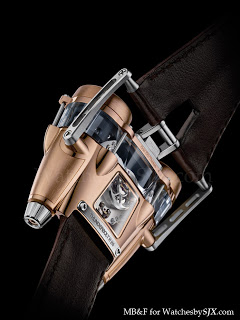 Originally presented in titanium, the Horological Machine No. 4 Thunderbolt is now available in rose gold and titanium. Just unveiled at Baselworld 2012, the HM4 RT (“rose titanium”) is a limited edition of 18 pieces. This is the second limited edition series of HM4 after the WWII fighter-inspired Razzle Dazzle and Double Trouble. I somehow prefer the original titanium look of the HM4, but I’m sure this will find its clients. – SJX 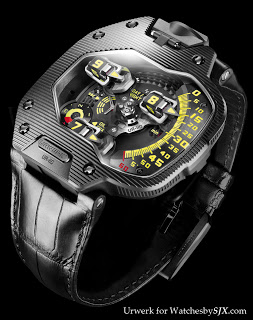 Urwerk’s latest version of the UR-110 Torpedo is the UR-110 ST. It has a steel front plate engraved with horizontal grooves and coated in black AlTiN, coupled with striking yellow numerals and indices.

The engraved grooves remind me of the UR-1001 Zeit Device pocket watch, while the AlTiN coated steel plate is similar to that on the UR-110 in blue for The Hour Glass. 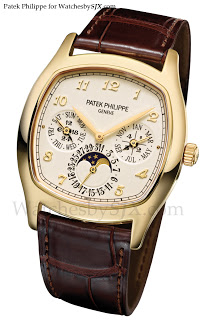 Two of the least common nineties era Patek Philippe perpetual calendar watches are the tonneau shaped 5040 and 5041. This year at Baselworld 2012 Patek reintroduces the tonneau case perpetual in the form of the 5940J. The yellow gold case is 44.6 mm by 37 mm. The dial is ivory with a grained texture, and all the indices and hands are yellow gold, except 24 hour and leap year subdial hands in blued steel. Inside sits the tried and tested cal. 240 Q micro-rotor automatic first used in the classic 3940 perpetual. What I find especially notable about the 5940 QP is the elegant serif fonts used for the numerals on the subdials. The fonts are a minor detail but give the watch a far more sophisticated and classical bearing than the boring fonts used on most of the contemporary Pateks, like the 5550P Advanced Research silicium perpetual calendar or the newer 5235 regulator. Overall the 5940 looks much more tasteful than the 5131 cloisonne world time for instance. Bravo to Patek! – SJX My favourite Patek from Basel 2012 - the 5940J pepetual calendar

The second Tudor dive watch launched at Baselworld 2012, in addition to the vintage styled Black Bay, is the Pelagos (Ref. 25500TN). This has pretty impressive specs: a 42 mm, satin-finished case in titanium rated to 500 m (1640 ft), with helium escape valve and black ceramic bezel insert. But it still has cues from the vintage Tudor “snowflake” Submariner with its snowflake hands and square indices.

Interestingly, the titanium bracelet is fitting with a self-adjusting dive extension system that “[contracts] in deep water when the diving suit is compressed and its volume is reduced, and, conversely, [expands] as the pressure eases during the ascent.” This is possible due to a pair of springs inside the clasp that maintain tension, allowing the bracele to fit snugly regardless of depth and pressure.  This is illustrated by the short video below. And the Pelagos is also available on a rubber strap with diver’s extension.

This has the same calibre as the Black Bay, the ETA 2824 automatic with 38 hours power reserve. The price will be approximately USD4400 – a pretty attractive price. I still prefer the vintage style of the Black Bay though. The Pelagos strikes me as too much and it just doesn’t do it for me visually. 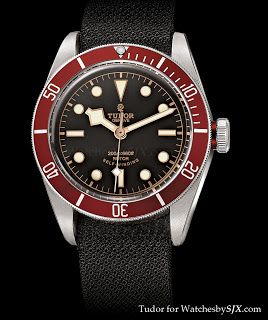 Tudor is continuing its highly successful run of vintage inspired Heritage models with the Black Bay diver (ref. 79220R), just presented at Baselworld 2012. Inspired by various vintage Tudor dive watches, including the famous “snowflake” Submariner, the Black Bay has several features taken from the vintage Tudor divers. It has a domed sapphire crystal and domed dial. Furthermore the dial is a “gilt” dial, with pink gold lettering, indices and hands which makes me think of the early Rolex Submariners.

The aluminium bezel insert is matte burgundy, like that on the 1970s Tudor diver. There is also a burgundy ring on the base of the crown, which is topped with the Tudor rose logo. And importantly it has snowflake hands, one of the most distinctive traits of the vintage Tudor Submariners. Admittedly the vintage snowflake watches had square indices on the dial, but I still reckon this looks exceptionally good. The price will be a reasonable USD3700 or so. Traditionalists will see this as a mish-mash of vintage design elements but I don’t mind and I like it. This is a great looking product and I already want one. I have the Heritage Chronograph aka Monte Carlo, and was also impressed by the Heritage Advisor Alarm of 2011. Tudor is on a winning streak.

– SJX Update: A few live pics of the Black Bay from Baselworld. 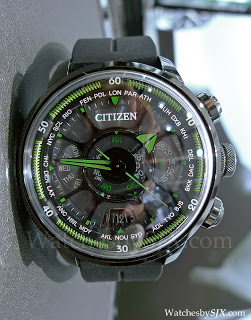 Hirota-san has a unique perspective, being intimately familiar with both the Japanese and Swiss watchmaking industries. I thought it is worth reproducing in full here. Many thanks to Hirota-san.

– SJX “These years, Japanese watchmakers are seeking to provide raw movements (ebauche) to Europe. Seiko Instruments Inc (SII) previously supplied cal. 4L movement via Soprod. Officially Seiko denied it, but some in Seiko Corp unofficially admitted that Soprod A10 (“A” indicates “Altanus”, meaning alternative) is based on the Seiko cal. 4L. But acquisition of Soprod by a Chinese maker [the now defunct Peace Mark of Hong Kong] fractured Seiko’s attempt. Swatch and Seiko were not welcome to supply raw movements to Soprod cause of maintenance of confidentiality. That’s the why Richard Mille produced in-house movement this year, instead of Soprod automatic based on ETA automatic. On the contrary, Citizen has good experience in ebauche business. Citizen is one of the largest suppliers of quartz movements. And now, they exports Miyota automatic movements to China and Germany. Fairly speaking, what feeds Citizen now is not watch but ebauche business. Considering their position, it is natural that Citizen wants to expand ebauche business in the luxury field. A person in Citizen explained the acquisition of LJP: “[The] shareholders wanted to sell LJP and offered [the firm to] some companies including Richemont and Citizen, maybe LVMH also. But Citizen won.” We can figure out why Citizen acquired LJP. 1. Yen is very strong. 2. Citizen has Bulova for mid range watches. 3. Citizen has one of the largest hairspring factories in Tokyo. It is not difficult to suppose that Bulova soon will carry interesting movement by LJP. And in the near the future, Citizen will supply Tokyo-made hairsprings via LJP, I suppose. Some in Switzerland may get nervous on hearing the news, but I am personally very optimistic because watch industry of Switzerland has been the biggest customers of micromechanical machines made by Citizen. It is completely inadvisable for Citizen to get Swiss watch industry nervous. HIROTA, Masayuki of Chronos Japan”