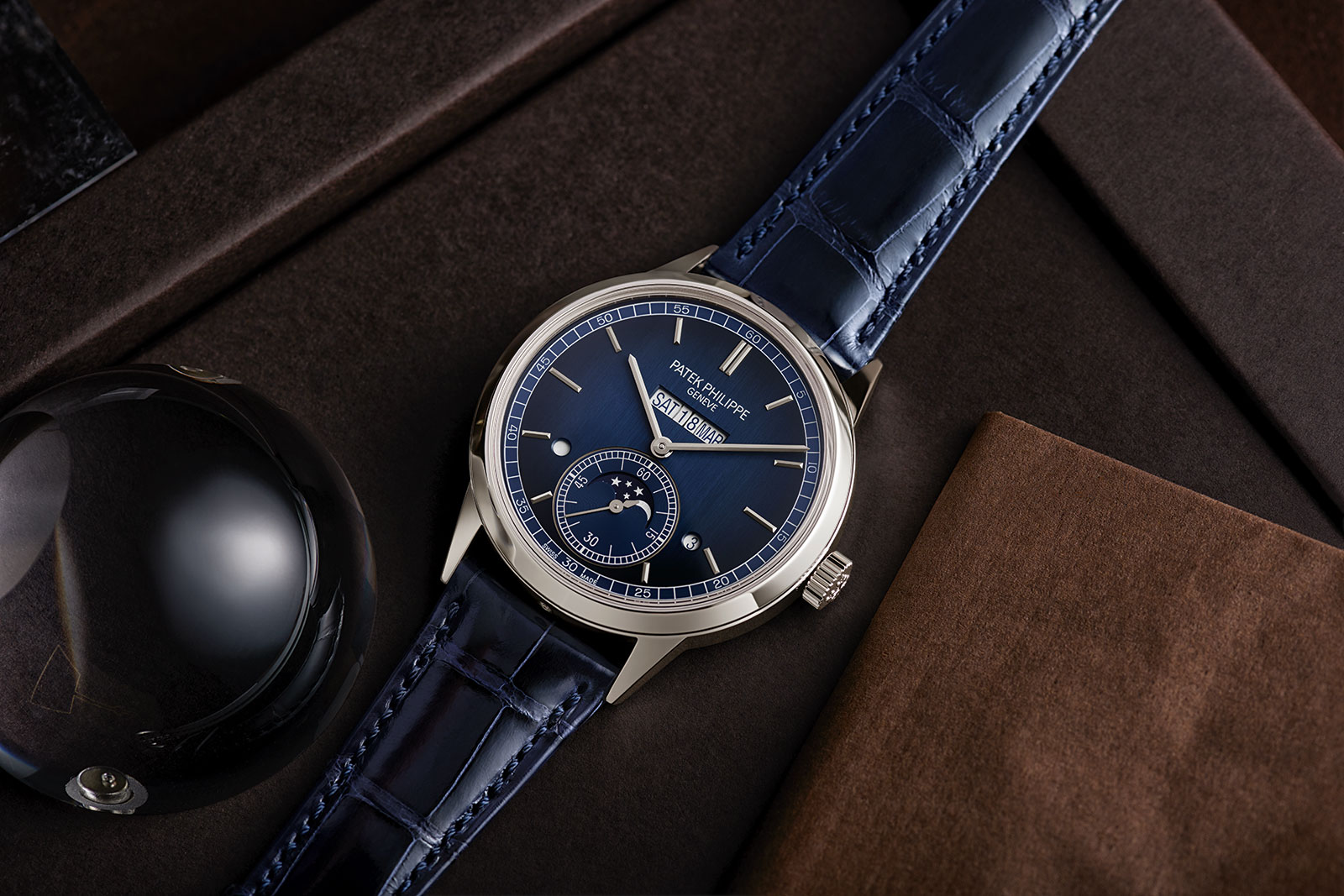 Shortly after launching the Nautilus ref. 5711/1A in green, Patek Philippe is taking the covers off something far more serious in terms of mechanics – the Ref. 5236P In-line Perpetual Calendar.

Clearly inspired by vintage perpetual calendar watches like the refs. 3448 and 3450 (and a dial that’s modelled on a vintage Calatrava), the ref. 5236P is ranks as amongst the most notable Patek Philippe calendar watches of recent years – both in terms of design as well as its newly-developed movement. 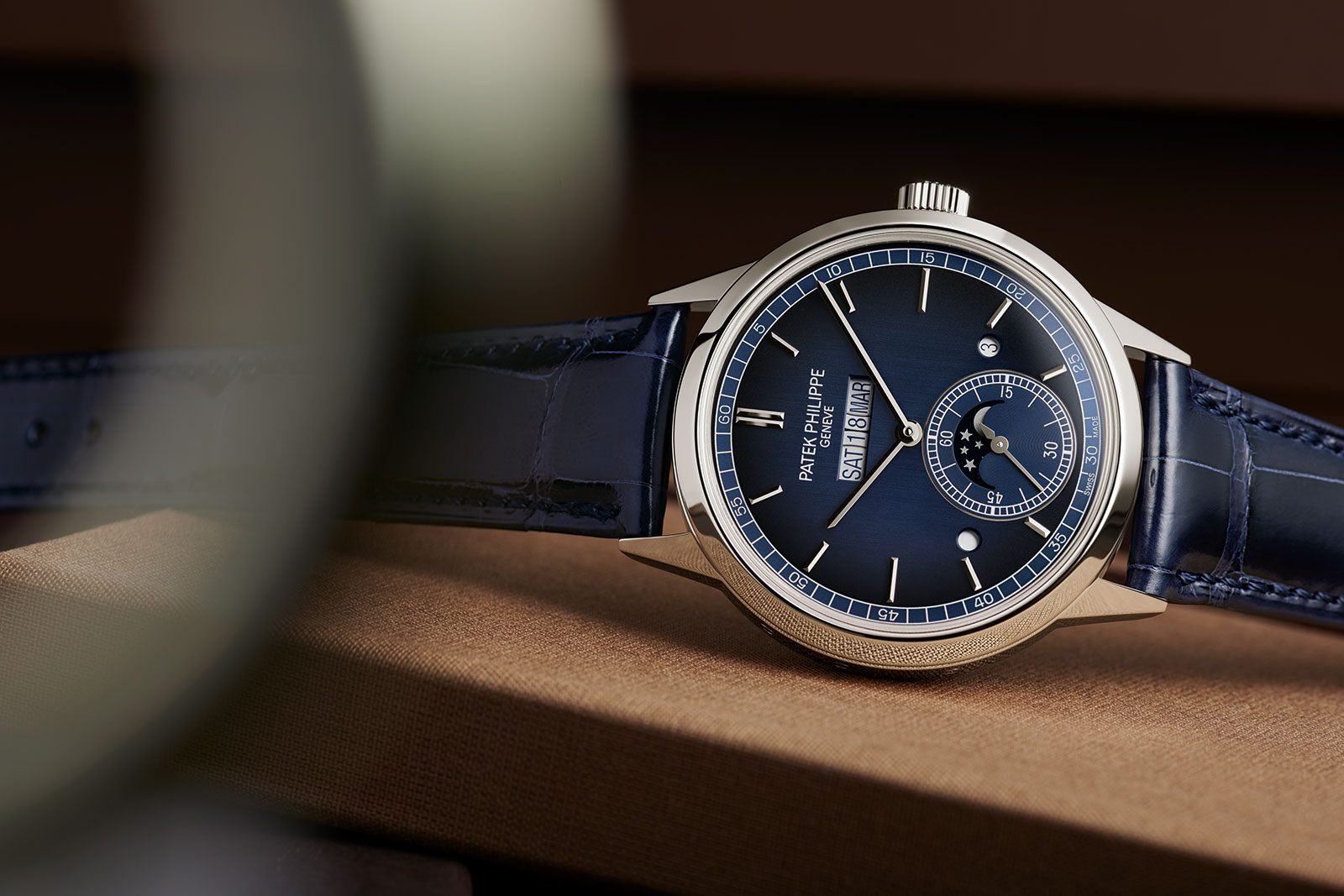 Bearing a close resemblance to the ref. 5235 Annual Calendar – an under-appreciated watch that I regard highly – the new ref. 5236P is equipped with a built-from-scratch calendar module that’s as complicated as some entire perpetual calendar movements. And it is powered by a refined and improved version of the uncommon cal. 31-260 micro-rotor movement that was so far only found in the ref. 5235. 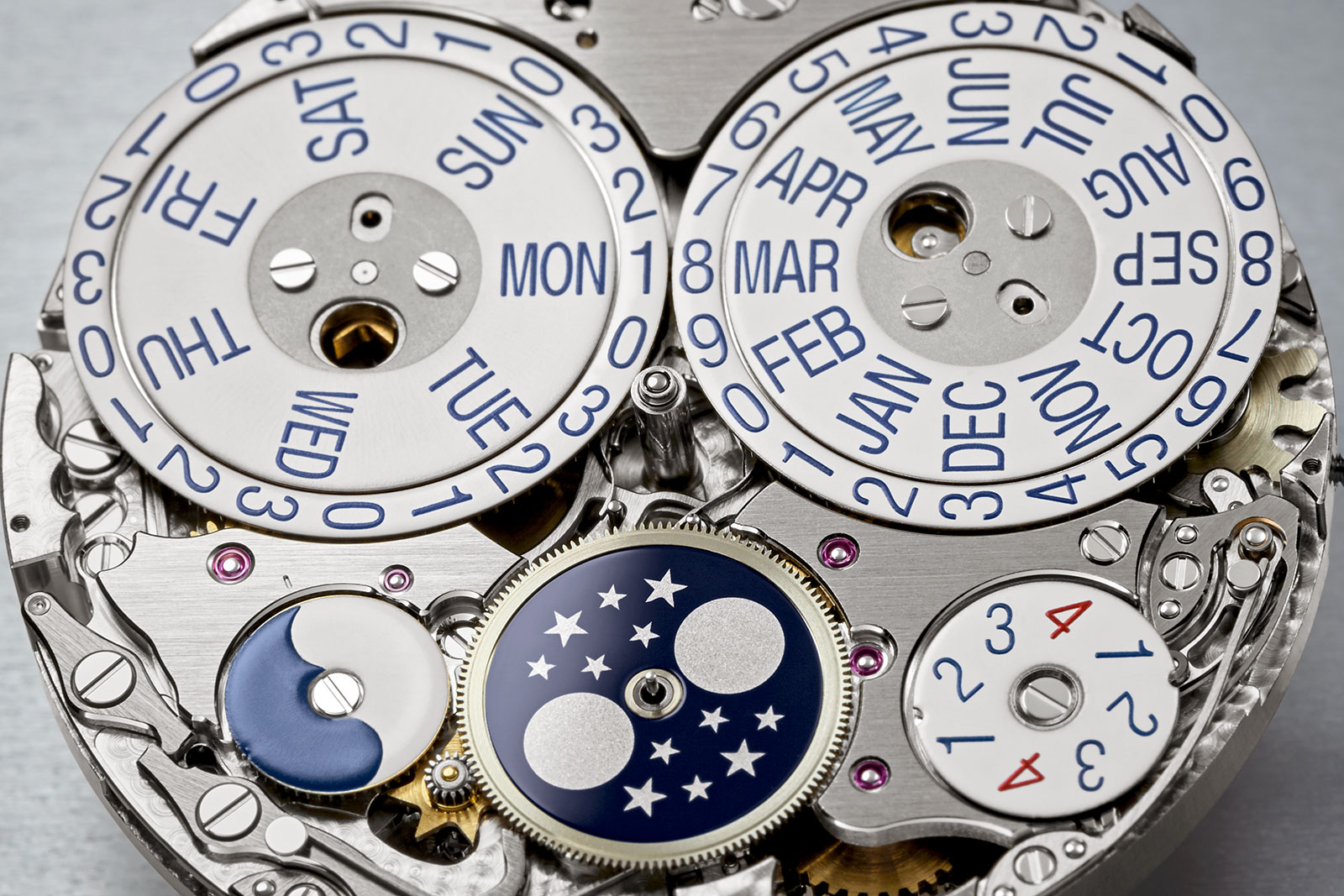 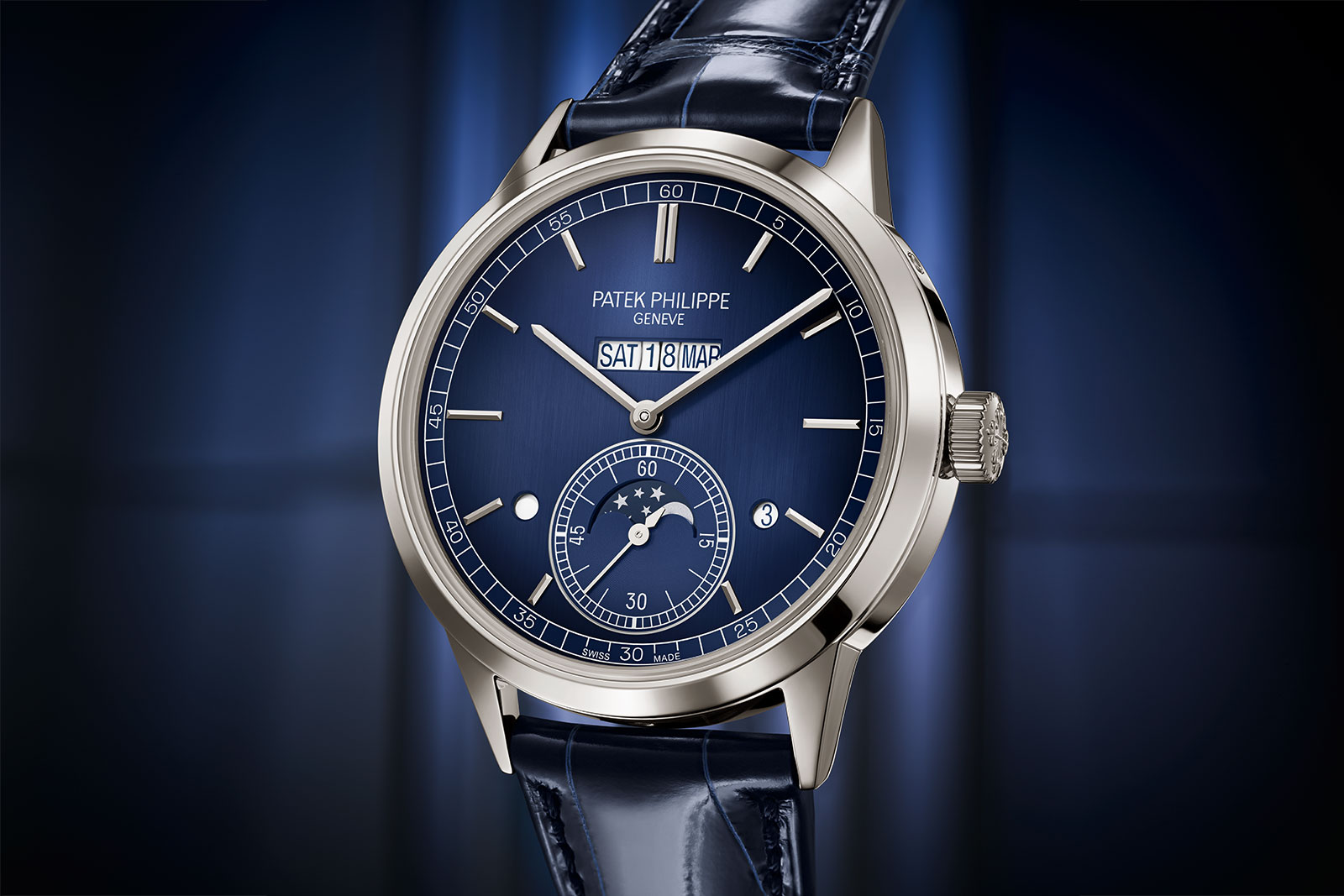 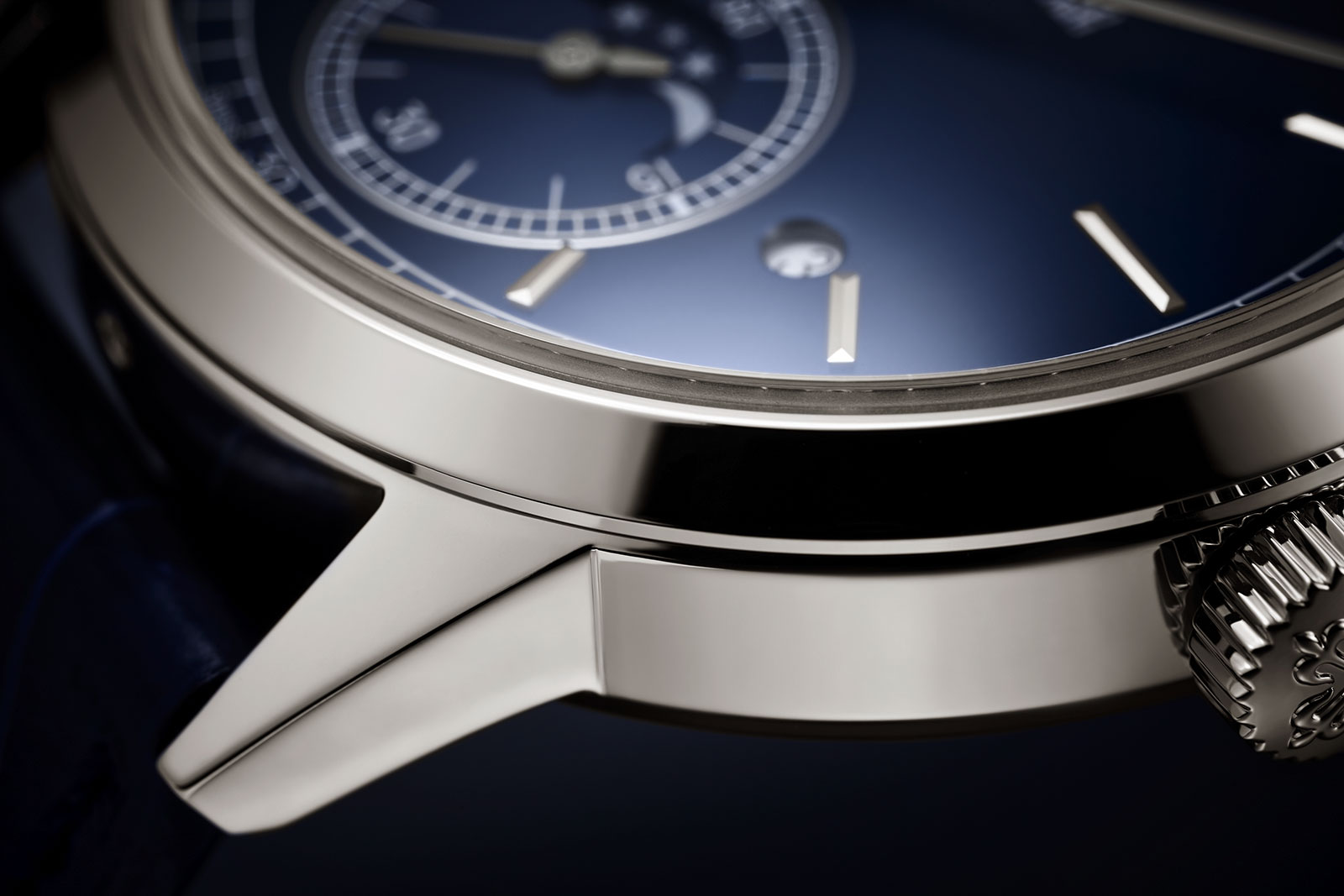 And the ref. 5236P has an elegant linear display for the calendar that was most notably found on vintage pocket watches. It is symmetrical, legible, and a welcome departure from the traditional three-counter calendar layout that’s long been convention for Patek Philippe perpetual calendars.

To accomplish the linear display in a legible and slim manner, Patek Philippe built an extremely complex calendar module that requires some 60% more parts – or 118 components – than a conventional module according to the brand. That means that the ref. 5236P is a pricey watch, costing some 40% more than current perpetual calendar models like the refs. 5327 or 5320. Those are admittedly in white gold while the ref. 5236P is platinum, but the difference is steep.

That said, the ref. 5236P a good looking watch with an ideal dose of historical inspiration – and an impressive new movement – which probably makes it well worth it as such things go.

The ref. 5236P has a platinum case that’s 41.3 mm in diameter and 11.07 mm high, making it one of the larger perpetual calendars in the Patek Philippe catalogue and slightly larger than the ref. 5235.

But the style is essentially identical to that of the ref. 5235, characterised by straight, tapered lugs and a wide, flat bezel. Modelled on the case of the ref. 3448 and 3450, both desirable perpetual calendar wristwatches of the 1960s and 1970s, the case has a modern look despite its vintage inspiration. 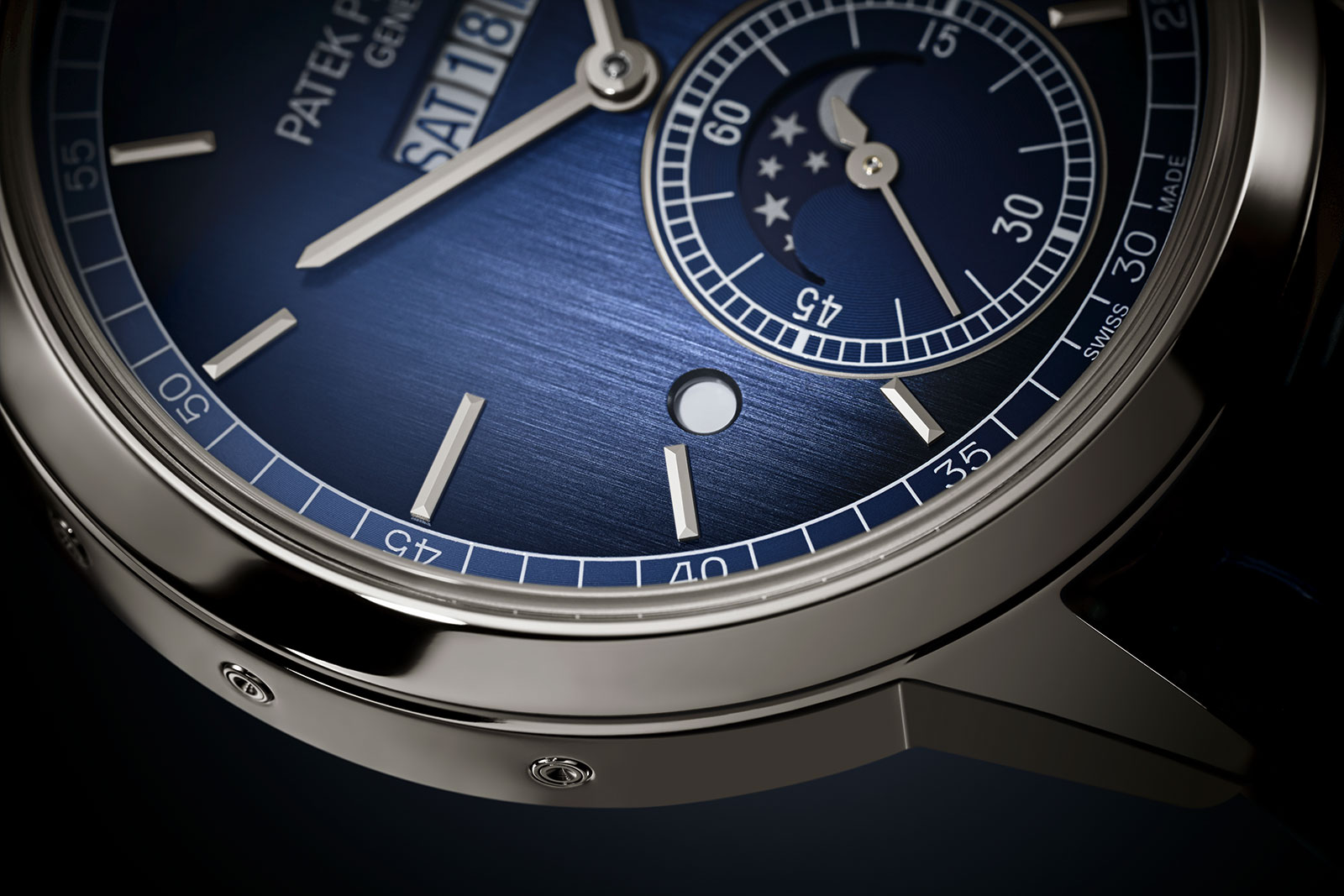 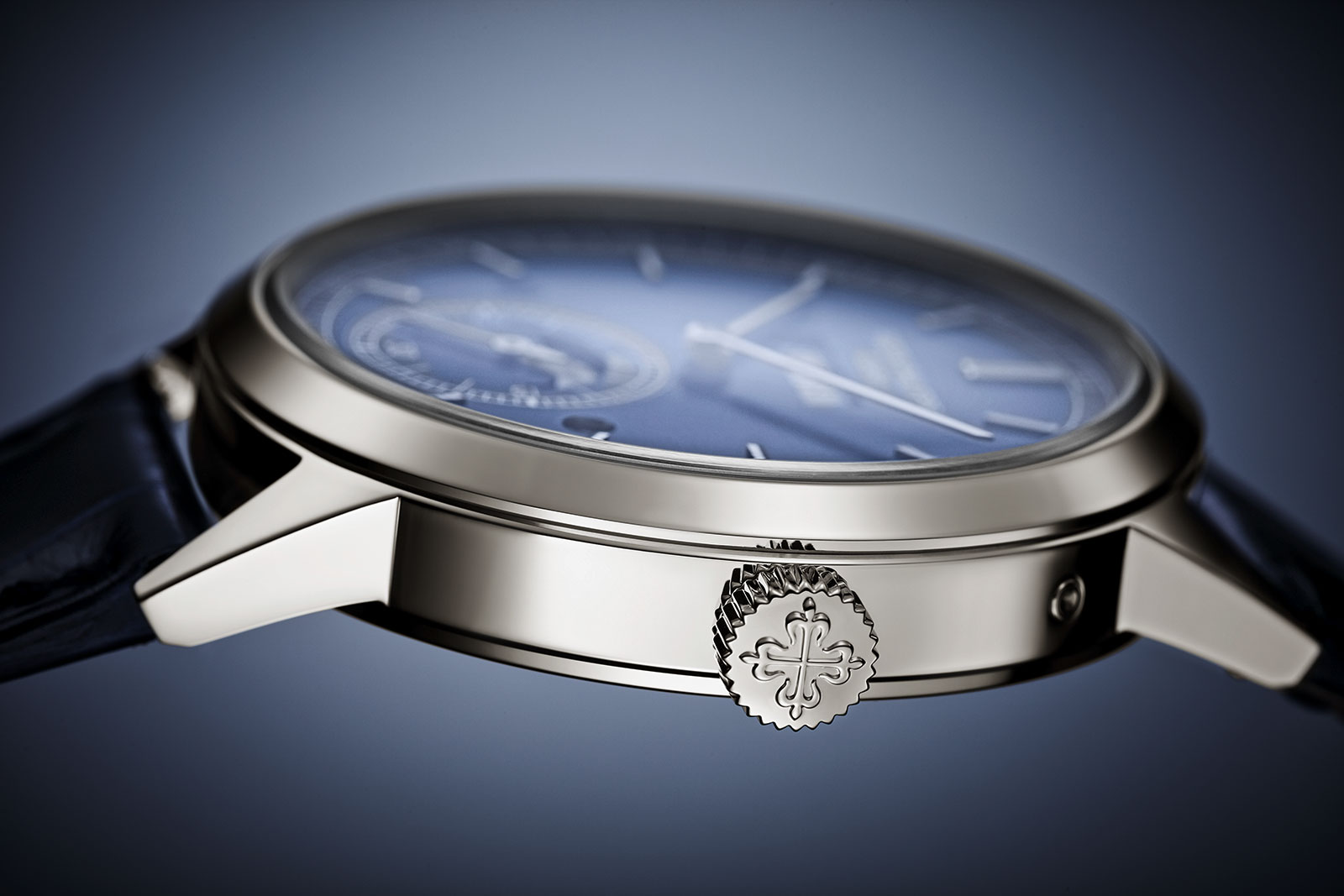 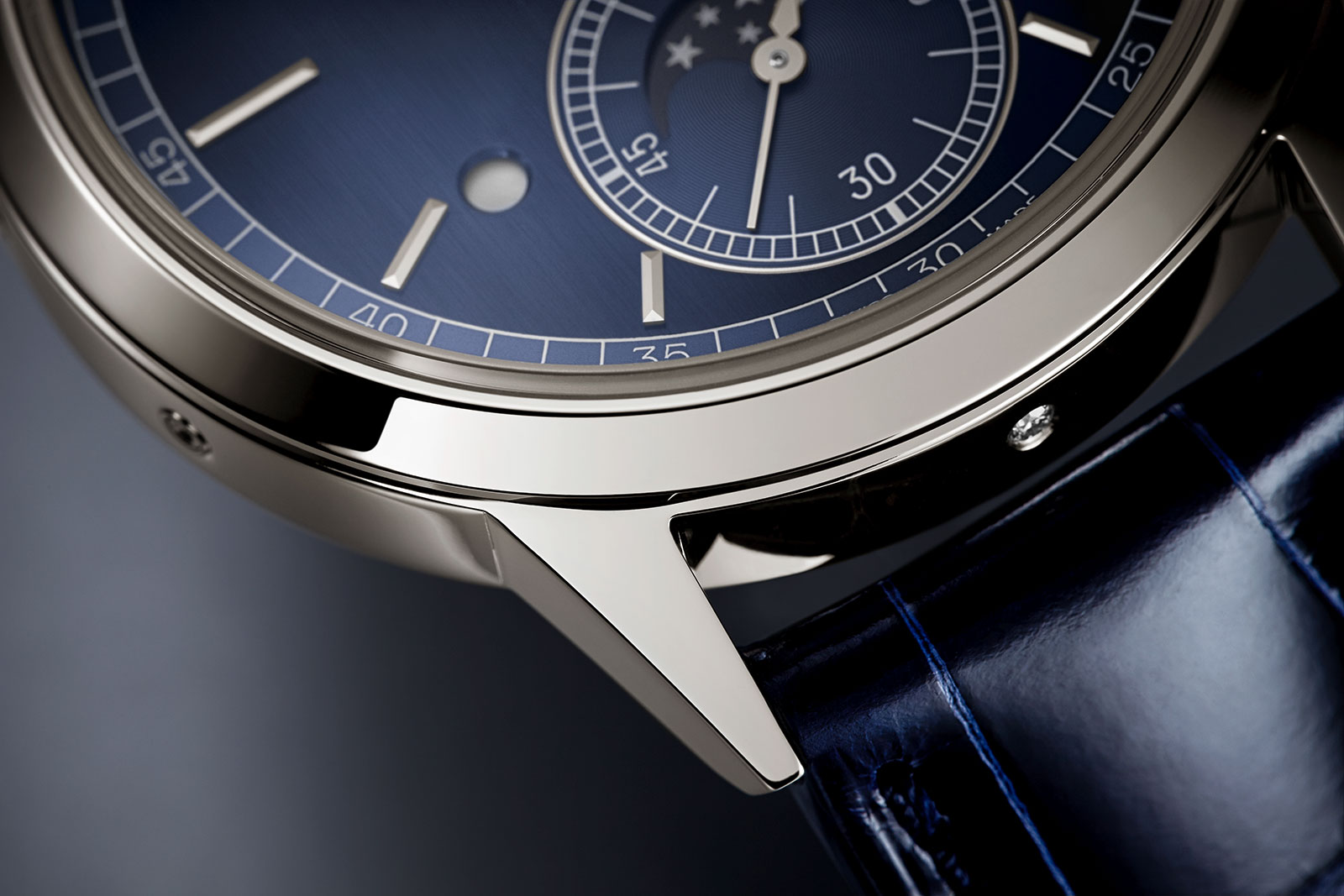 Similarly, the dial brings to mind the ref. 5235. It’s finished with a pronounced vertical graining, exactly as on the ref. 5235, but lacquered in gradient blue that darkens to black at the edges, giving it a smoked or fume finish.

The hour marks are applied, white-gold batons, matched with baton hands, also in white gold. A little flourish comes in the form of the pointed counterweight of the cheveau, or “horse”, seconds hand. 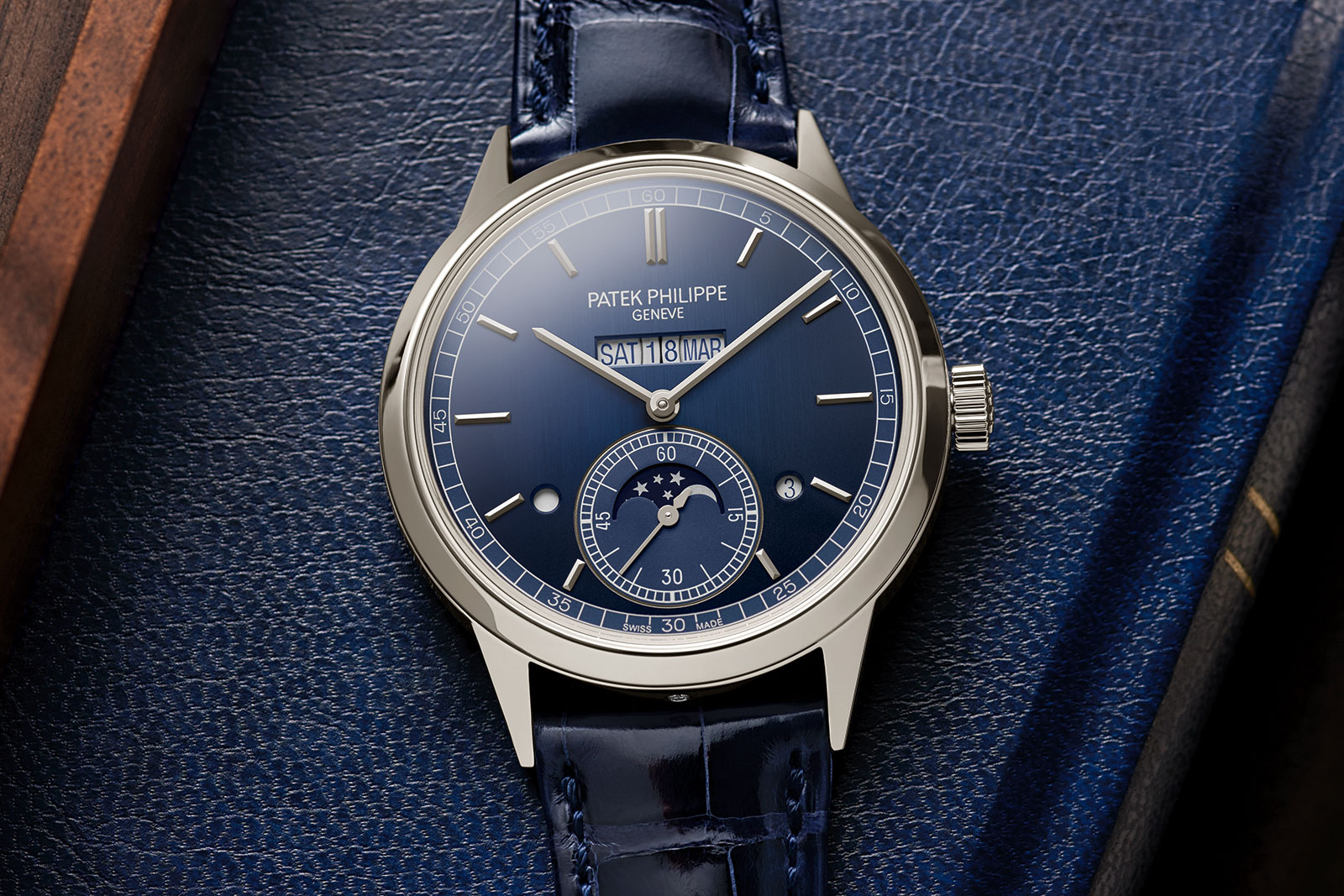 The cal. 31-260 PS QL made up of a base movement derived from the calibre in the ref. 5235, along with a newly-developed perpetual calendar module that boasts several patents. (The “PS” and “QL” suffixes in the movement name are short for petite seconde, which is “small seconds”, and quantième perpétuel en ligne, or “in-line perpetual calendar”, respectively.) 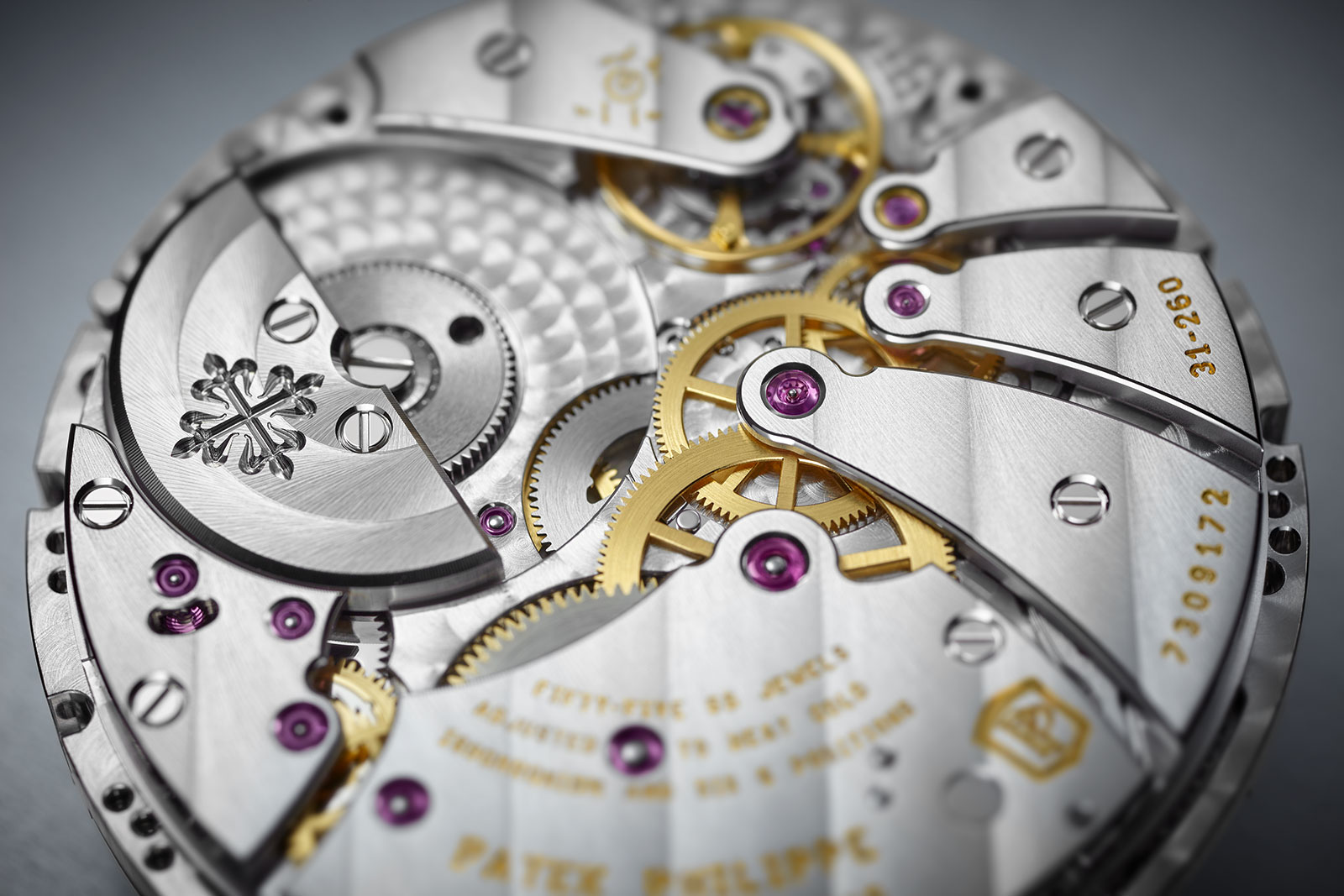 To start with, the increased energy required to drive the perpetual calendar called for a 20% increase in the torque delivered by the mainspring, and a corresponding boost in the winding efficiency of the rotor. As a result, the micro-rotor is now platinum, an alloy that’s denser than the 22k gold found in the ref. 5235’s movement. More interestingly, the beat rate of the movement was upped to 28,800 beats per hour, or 4 Hz, instead of the unusual 23,040 beats per hour of the ref. 5235. This improves the stability of timekeeping, even during the changeover of the calendar displays at midnight.

And the aesthetics of the movement have also been improved, with the single bridge of the ref. 5235 movement split into two finger bridges, one each for the fourth and escape wheel respectively. The trio of graceful finger bridges for the going train give the ref. 5236P’s movement a more classical aesthetic that brings to mind vintage pocket watch movements. From left: The finger bridges for the escape, fourth, and third wheels

Smartly constructed to be thin but functional, the calendar mechanism is centred on four large discs that show the day, date, and month in a single, linear window. The discs sit on “two coplanar double ball bearings”, which are patent pending according to Patek Philippe. The calendar is a “dragging” or gradual mechanism, where the displays change over a period of time around midnight. And as is convention for Patek Philippe, all of the calendar indications are set via recessed pushers in the case band.