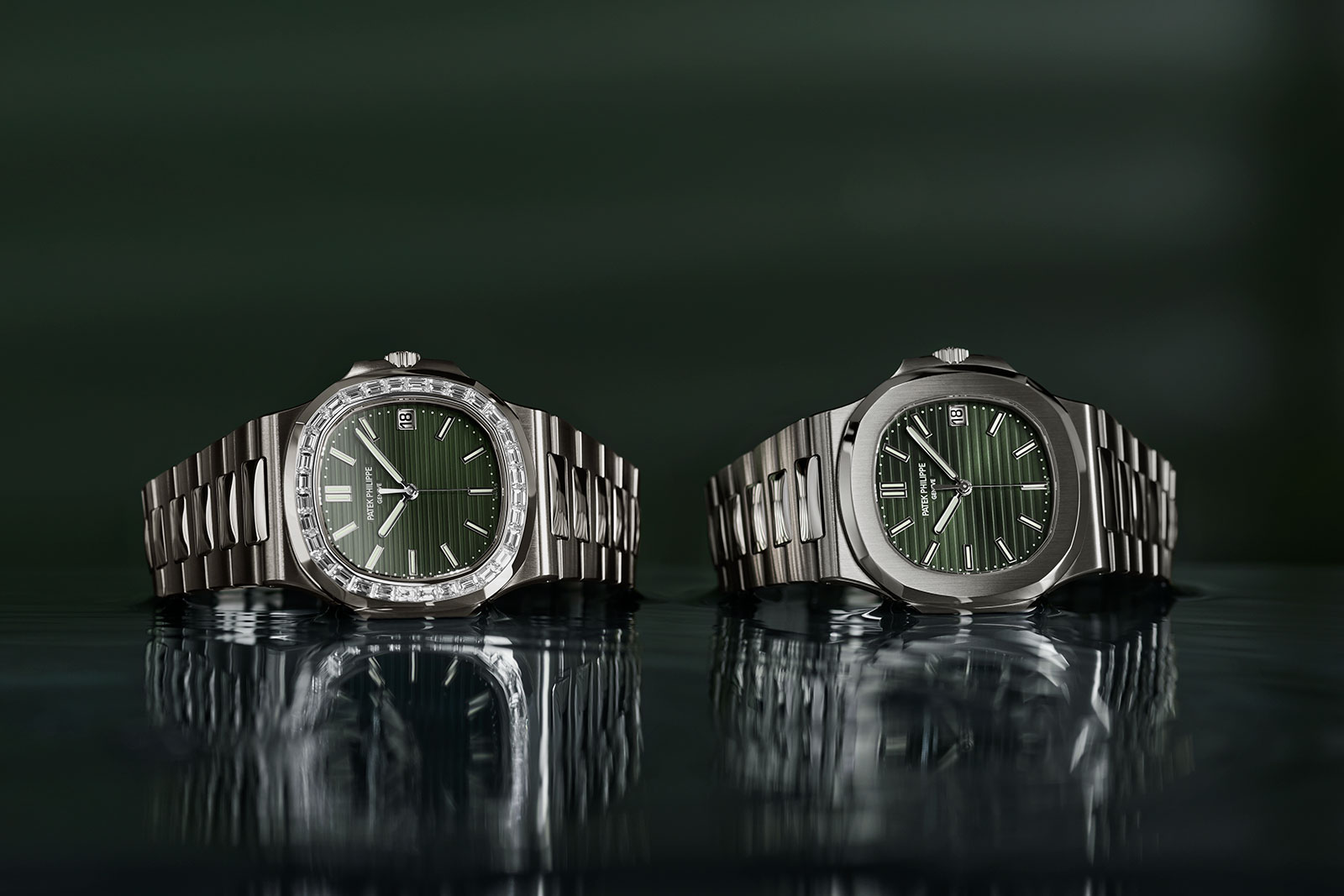 Perhaps the world’s most desirable wristwatch, the Nautilus ref. 5711/1A became even more sought after when was made known earlier this year that the model would be discontinued. To give it a proper send-off, the brand is now unveiling the final iteration of the Nautilus in steel, this time with an olive green dial. 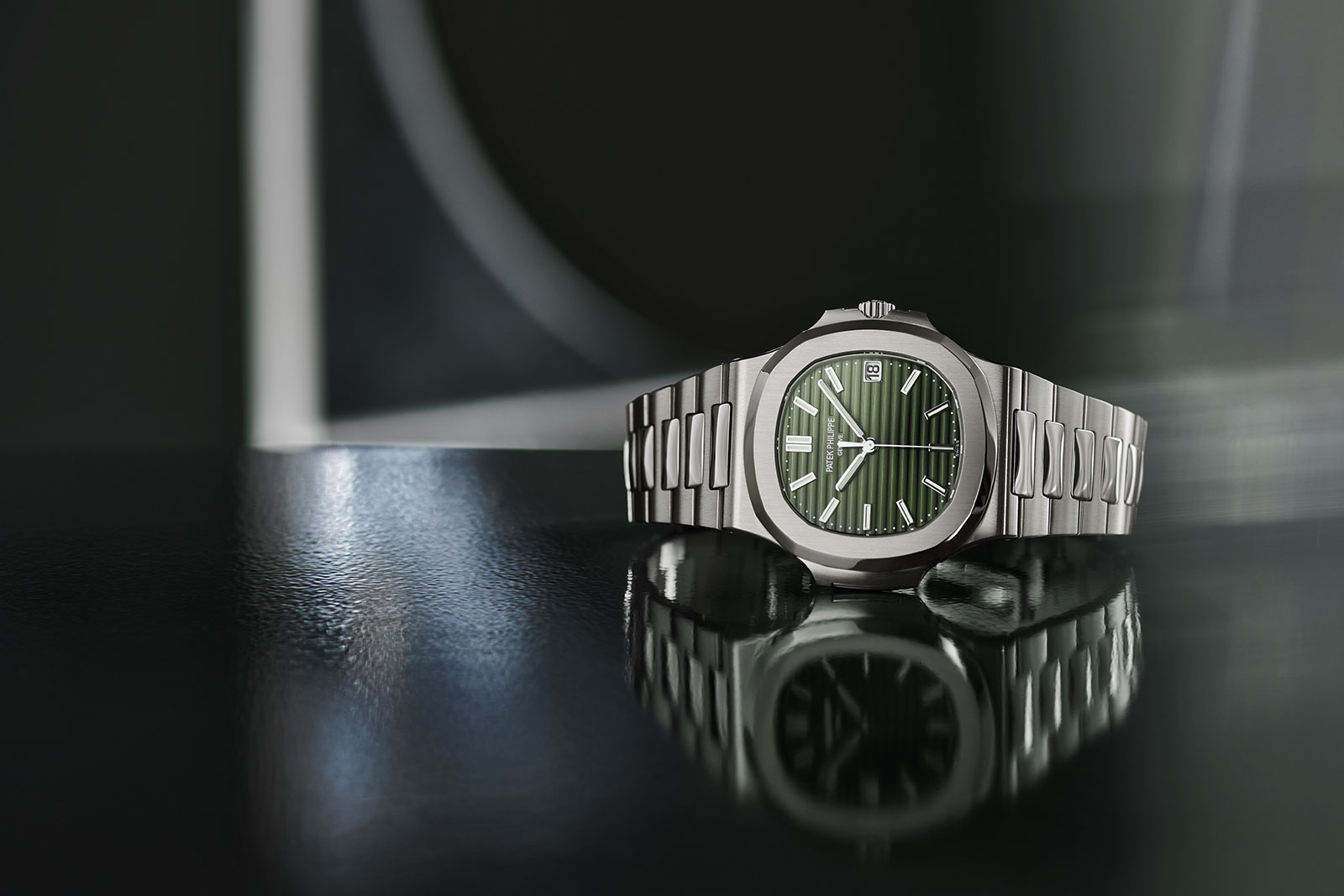 Already impossible to get, at least at the affordable retail price, the steel Nautilus will definitely be the rarest in green, out of all three variants (the others being the original blue dial, and the later white dial) and thus the most covetable. In essence, the new Nautilus is just a facelift. The case, movement, and bracelet remain the same – the only change is the olive green dial, which retains the signature, horizontal-stamped pattern. But given the impending discontinuation of the ref. 5711/1A, the mere fact there’s a new model has sent everyone into a frenzy.

And if the olive-green ref. 5711/1A isn’t enough of a symbol of insider access, there’s the diamond-set version. The diamonds should complement the olive dial nicely, for an eye-catching look that isn’t over the top.

The new models are great options for someone that wants the iconic design of the Nautilus, but something different. The challenge, as it has been for the past few years, is getting one – good luck. 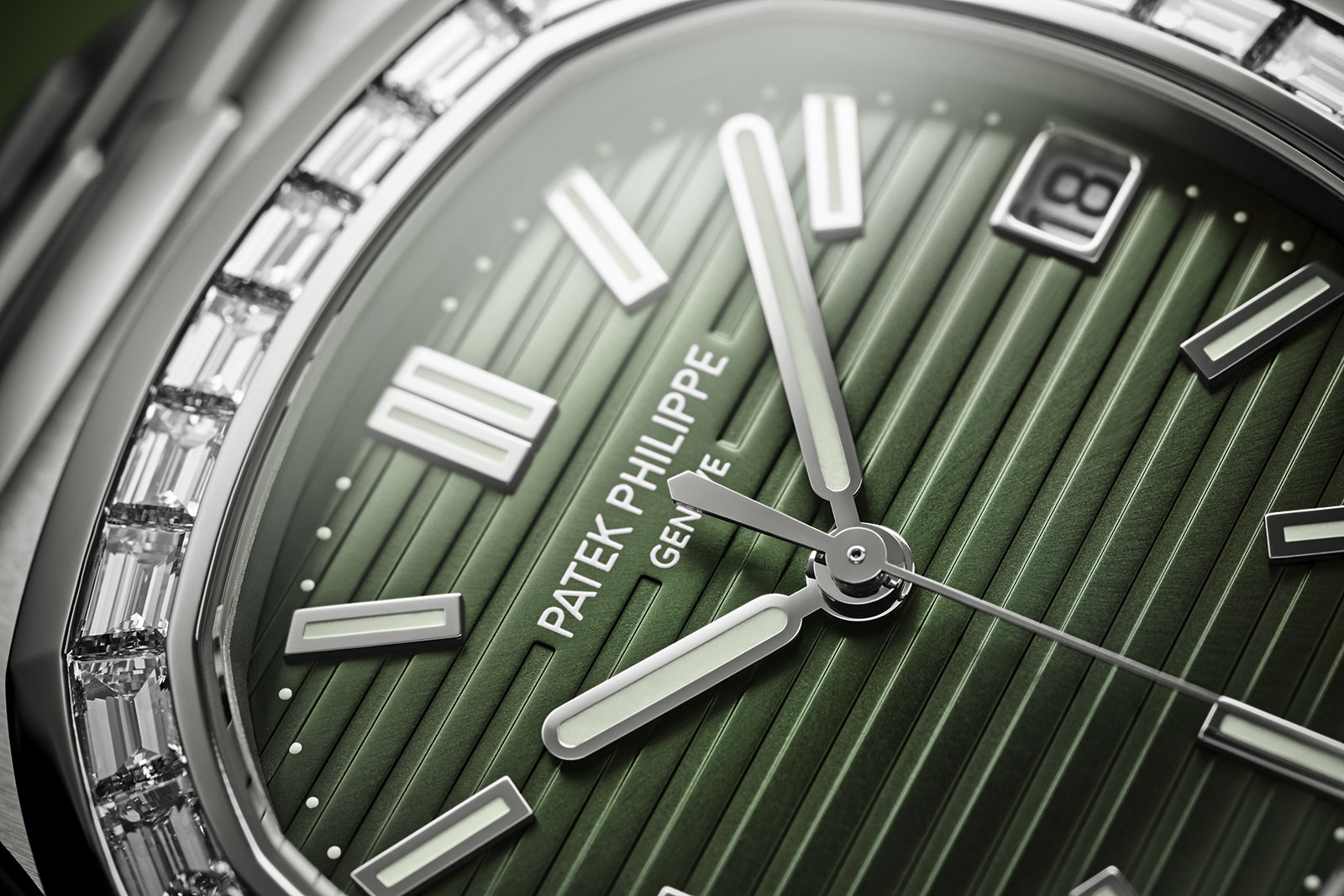 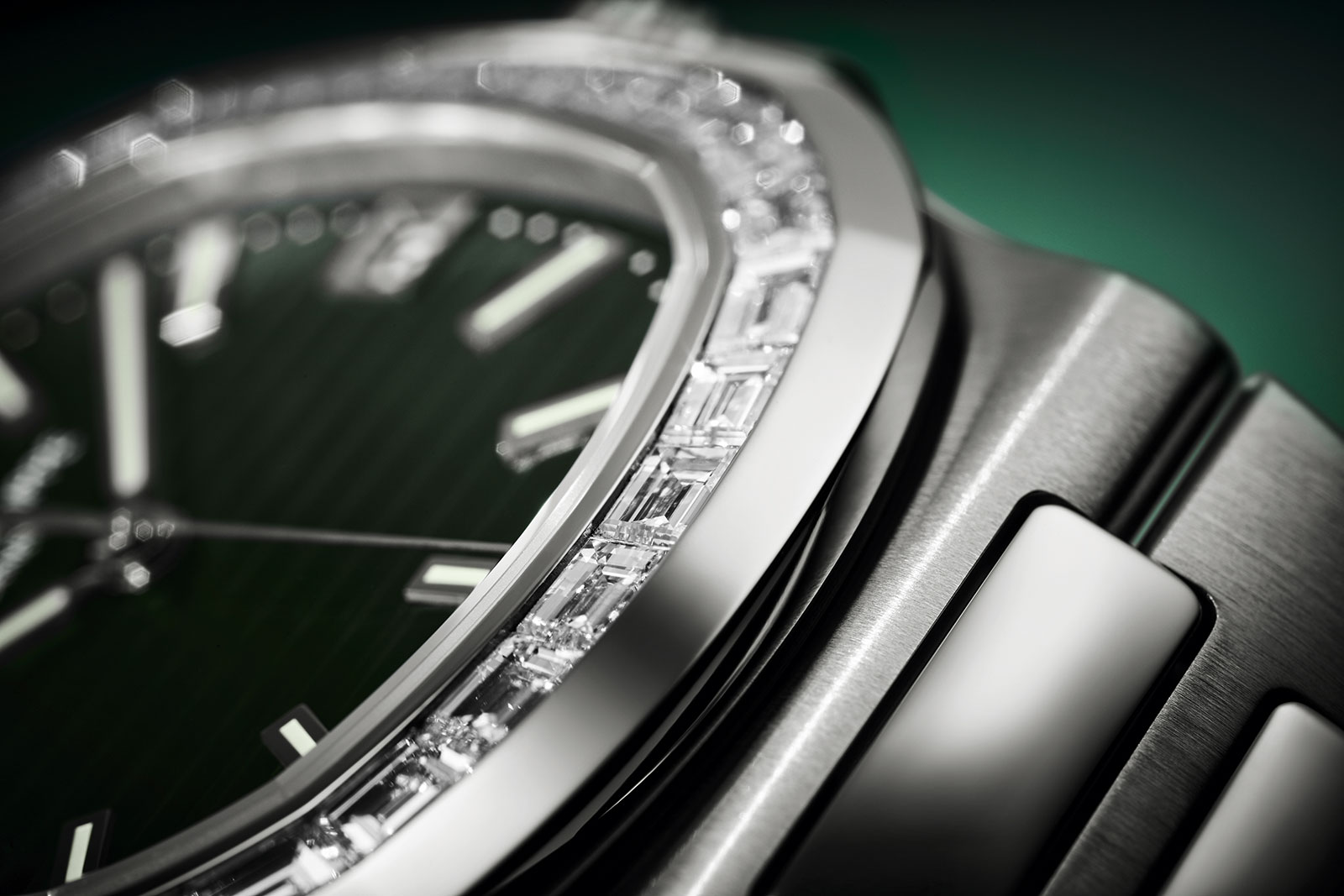 While green dials are increasingly fashionable, they are actually relatively uncommon at Patek Philippe, especially for its sports watches. This green dial is a first for the Nautilus. The closest alternative within Patek Philippe’s catalogue is the khaki-green Aquanaut that launched a few years prior. In comparison to that, the new Nautilus appears to be more striking on the wrist due to the metallic dial finish, which is entirely congruent with its status as the ultimate luxury-sports watch.

Like its predecessors, the case of the new remains finely finished – 55 steps are needed to complete the case, bezel, and bracelet according to Patek Philippe – with alternating satin-brushed and polished finishing visible on the bezel, bracelet and case. 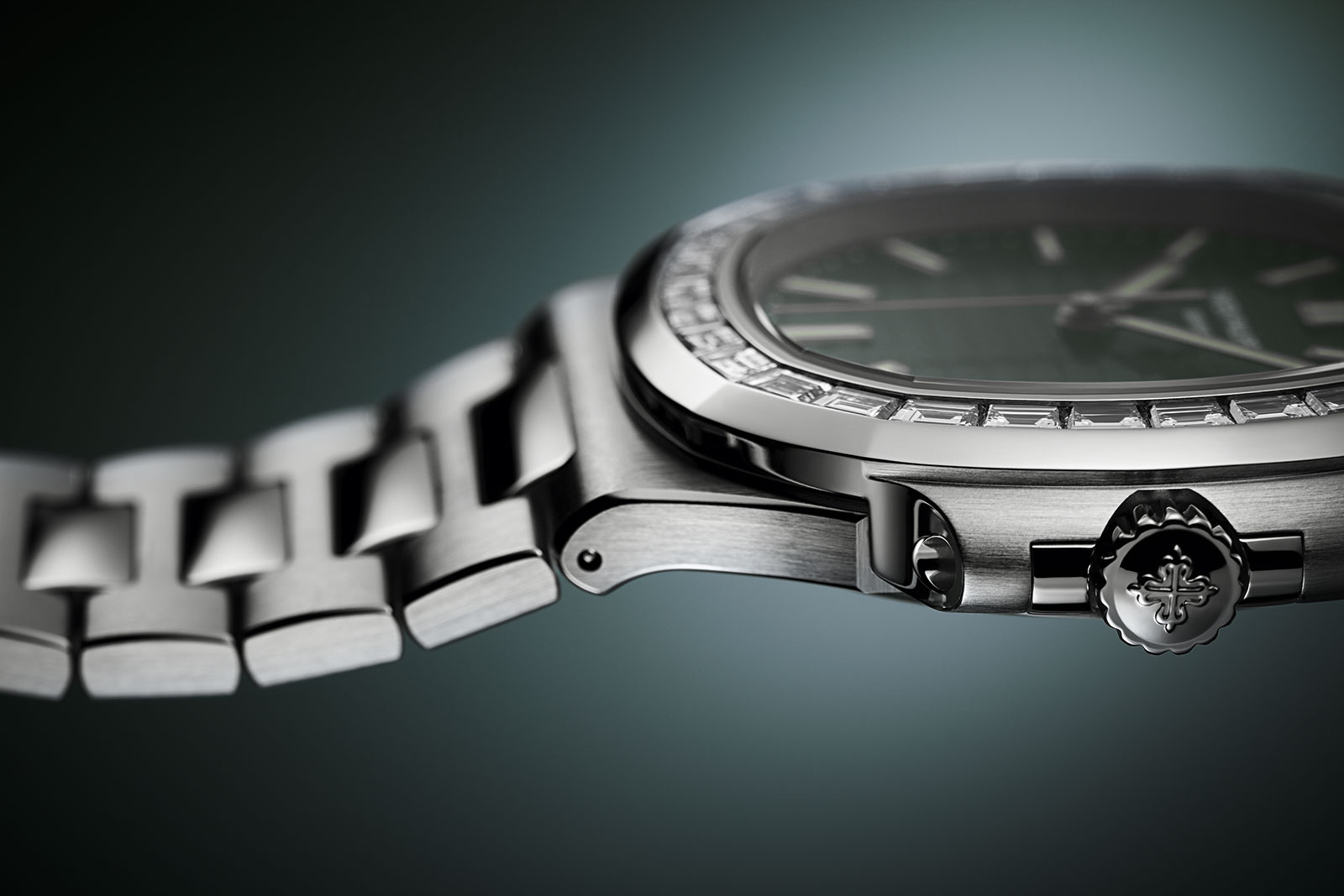 And the applied indices are crafted out of white gold, adding a touch of luxe to the otherwise steel watch. A bonus detail on the new dial is the tiny white gold frame around the date, which adds an extra bit of refinement to the look. Introduced in 2019 as an upgrade over the cal. 324 SC in earlier versions, the movement features hacking seconds, an average 40 hours of power reserve, and a 21k gold rotor. 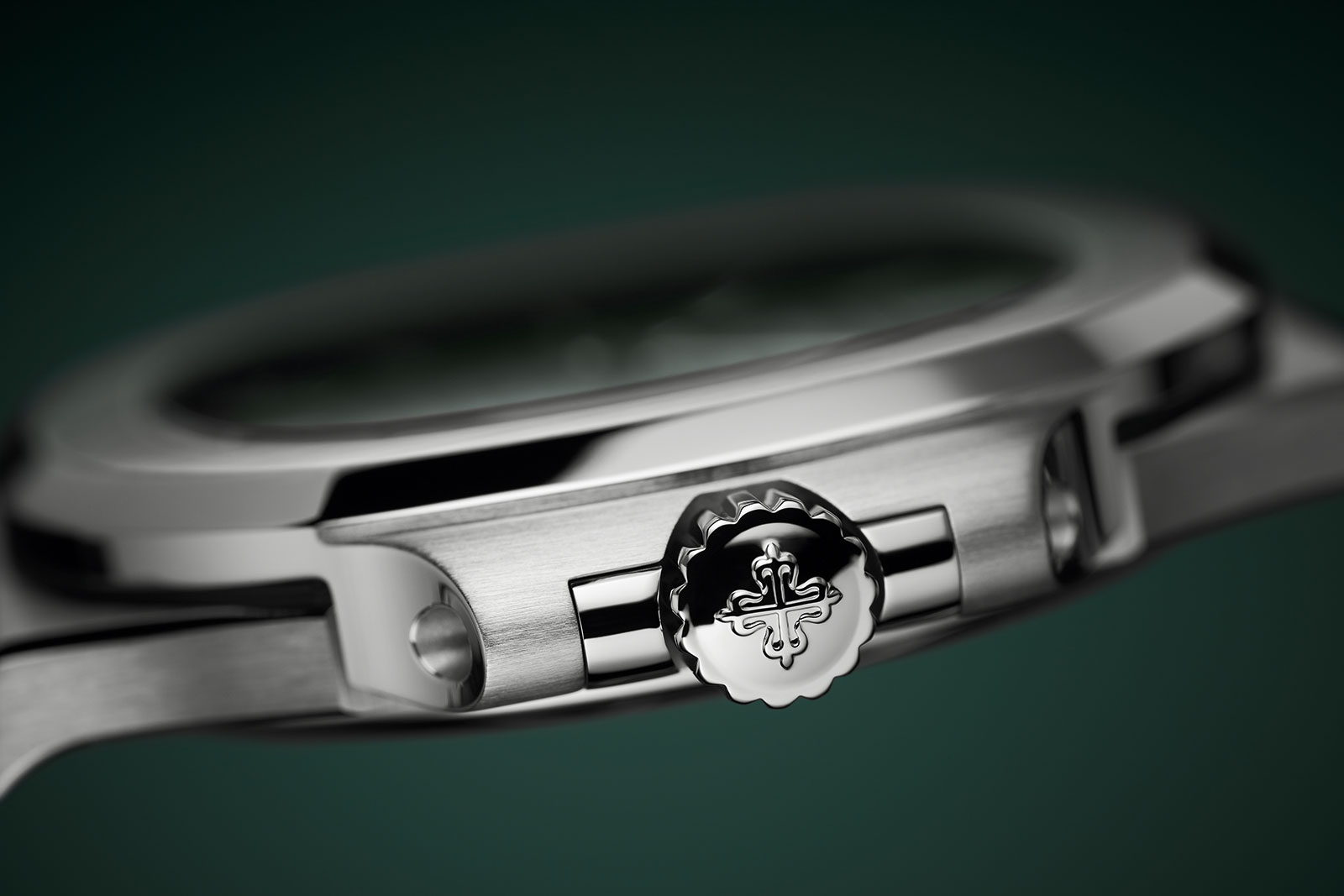