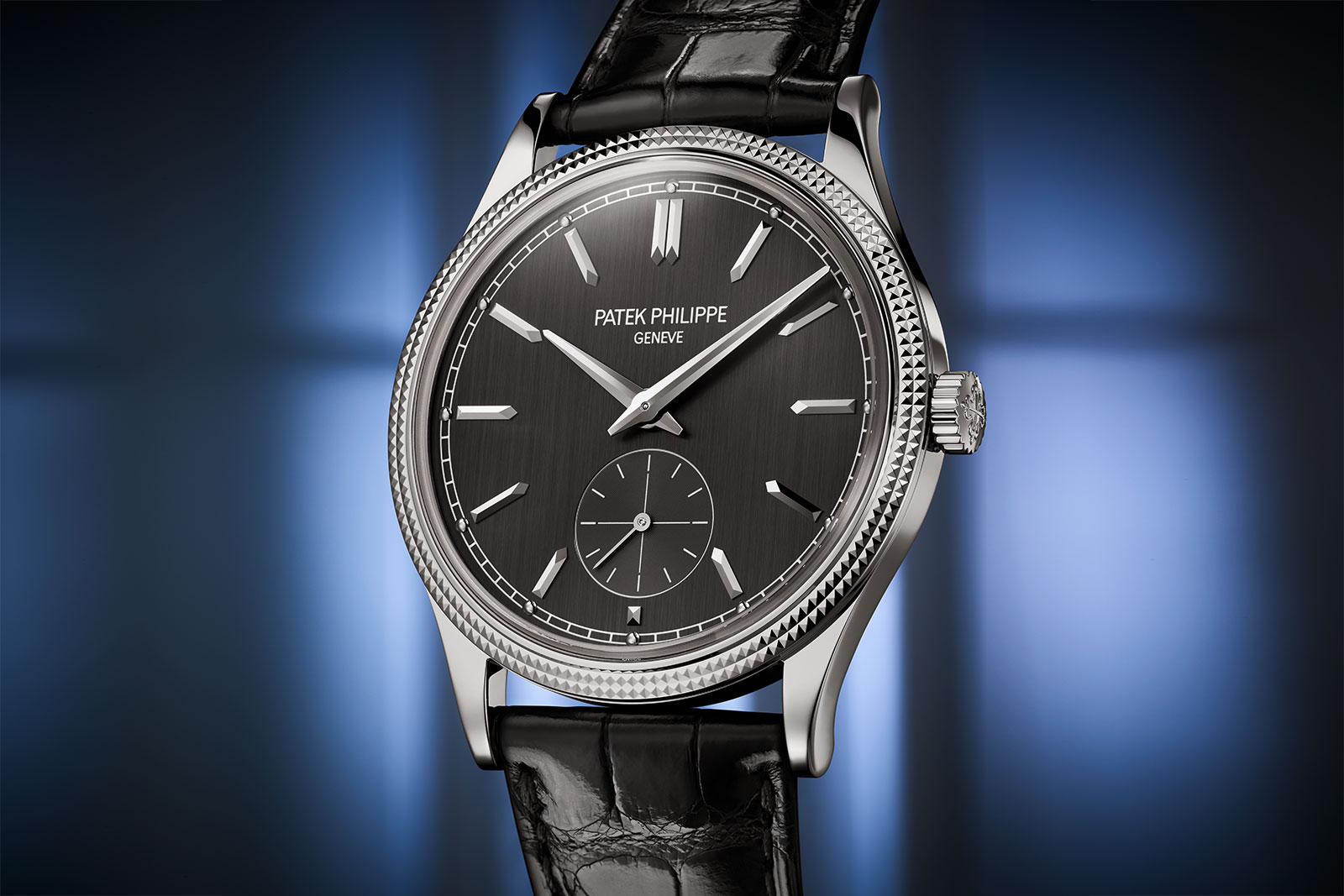 Though now often overlooked in favour of a luxury-sports watch, the Calatrava is perhaps the quintessential Patek Philippe – it was introduced in 1932 and named after the brand’s emblem – possessing a diversity of designs that all share an elegant simplicity. 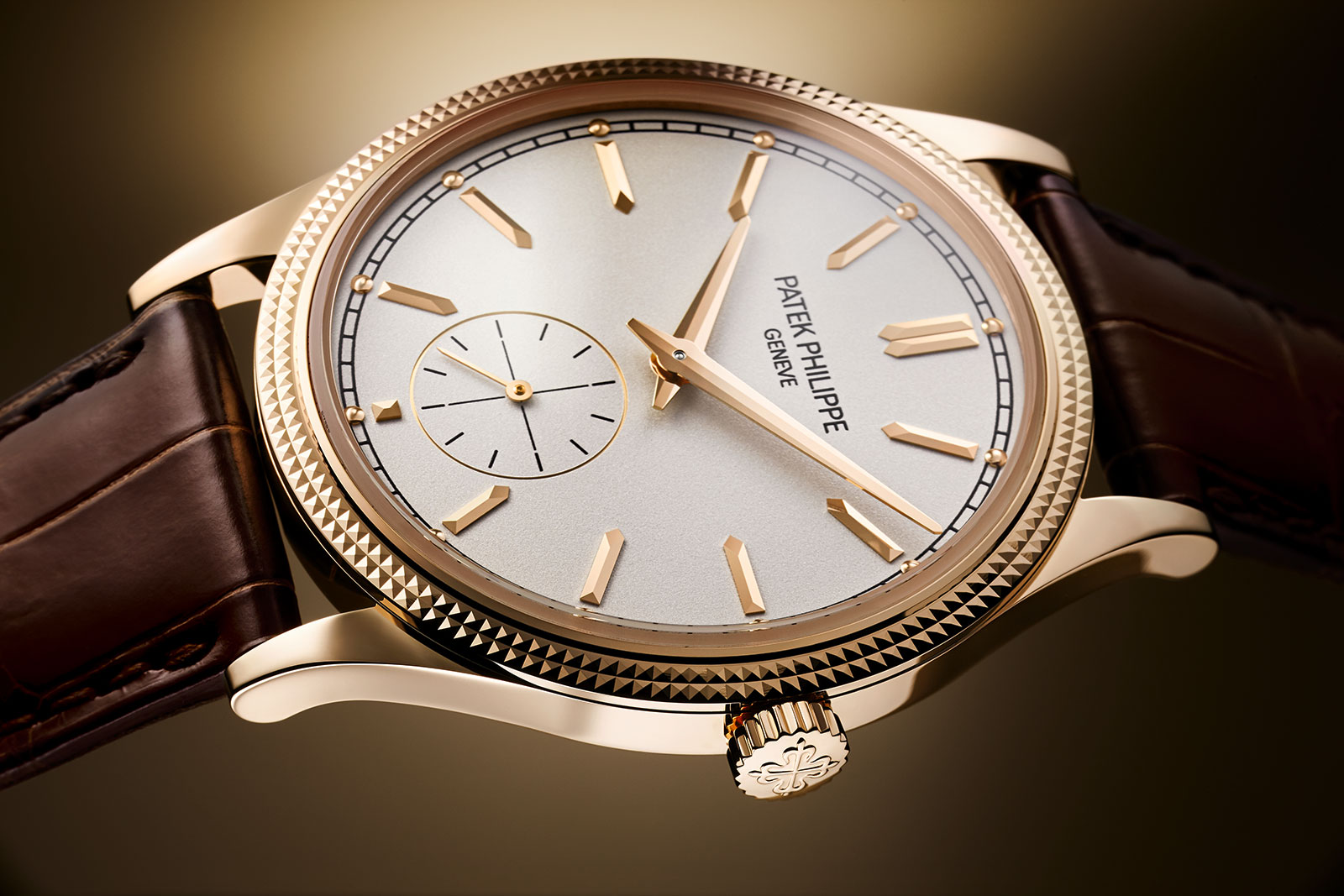 A tribute to well-known Calatrava models such as the ref. 3919 and its successor, the ref. 5119, the ref. 6119 blends several signature elements of past designs in a larger case to create a more contemporary guise that’s available in rose or white gold. Importantly, the ref. 6119 is powered by the newly-developed, hand-wind cal. 30-255 PS, a large, thin movement with twin barrels – and an impressively high moment of inertia for the balance wheel. 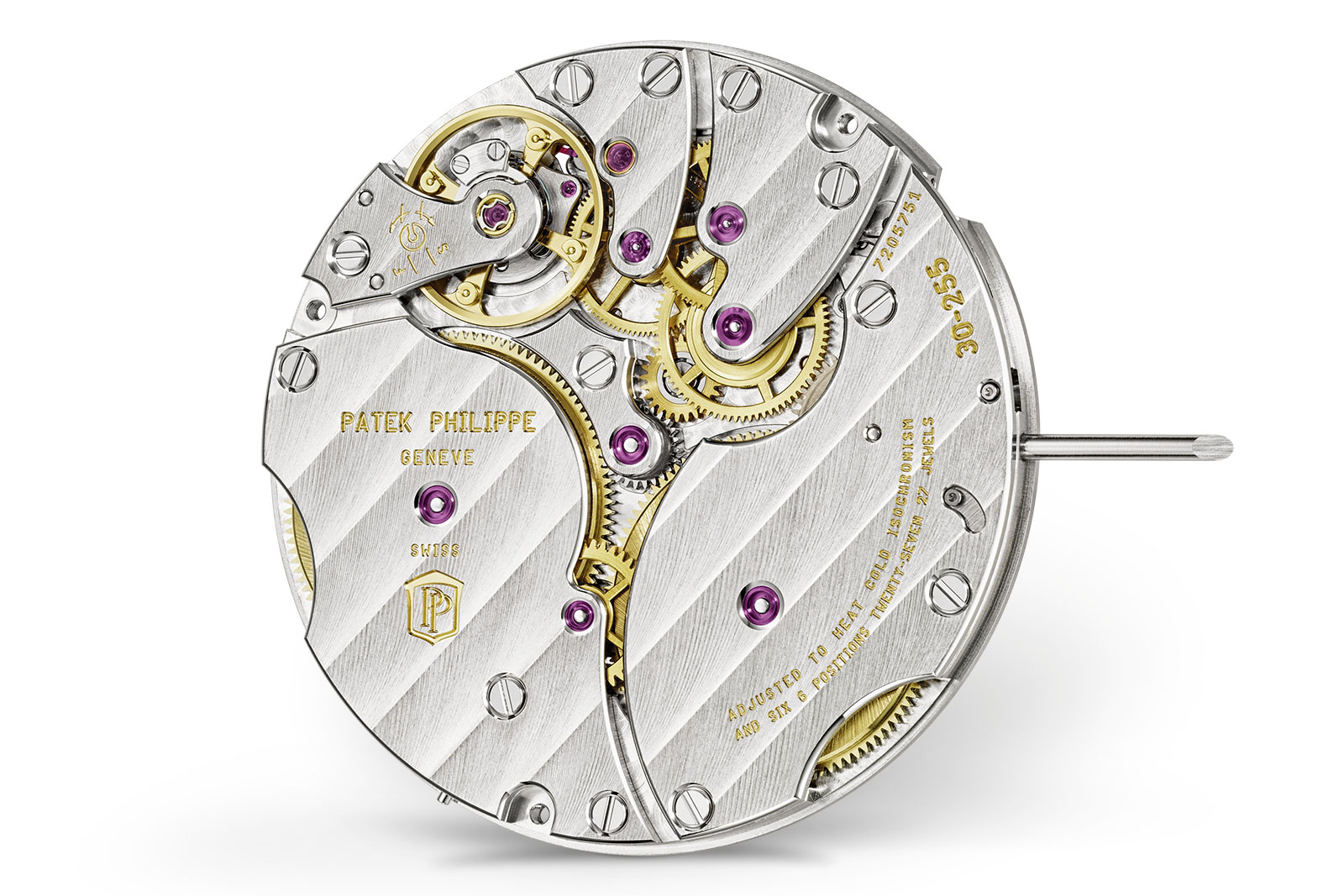 I’ve always been a fan of the Calatrava, especially variants with a hinged, “hunter” back like the ref. 5227. Best described as fine watches for gentlemen, they typify Patek Philippe’s traditional and refined approach to watchmaking.

But the cases of previous generations of the Calatrava were relatively small – the ref. 3919 was 33 mm, while the ref. 5119 had a 36 mm case. And more recent models, like the 40 mm ref. 6007 introduced last year, tended to be more casual in style, maybe too informal for a Calatrava.

In comparison, the ref. 6119 hits the sweet spot. The case is 39 mm, bigger but still refined enough to still be considered an elegant dress watch. 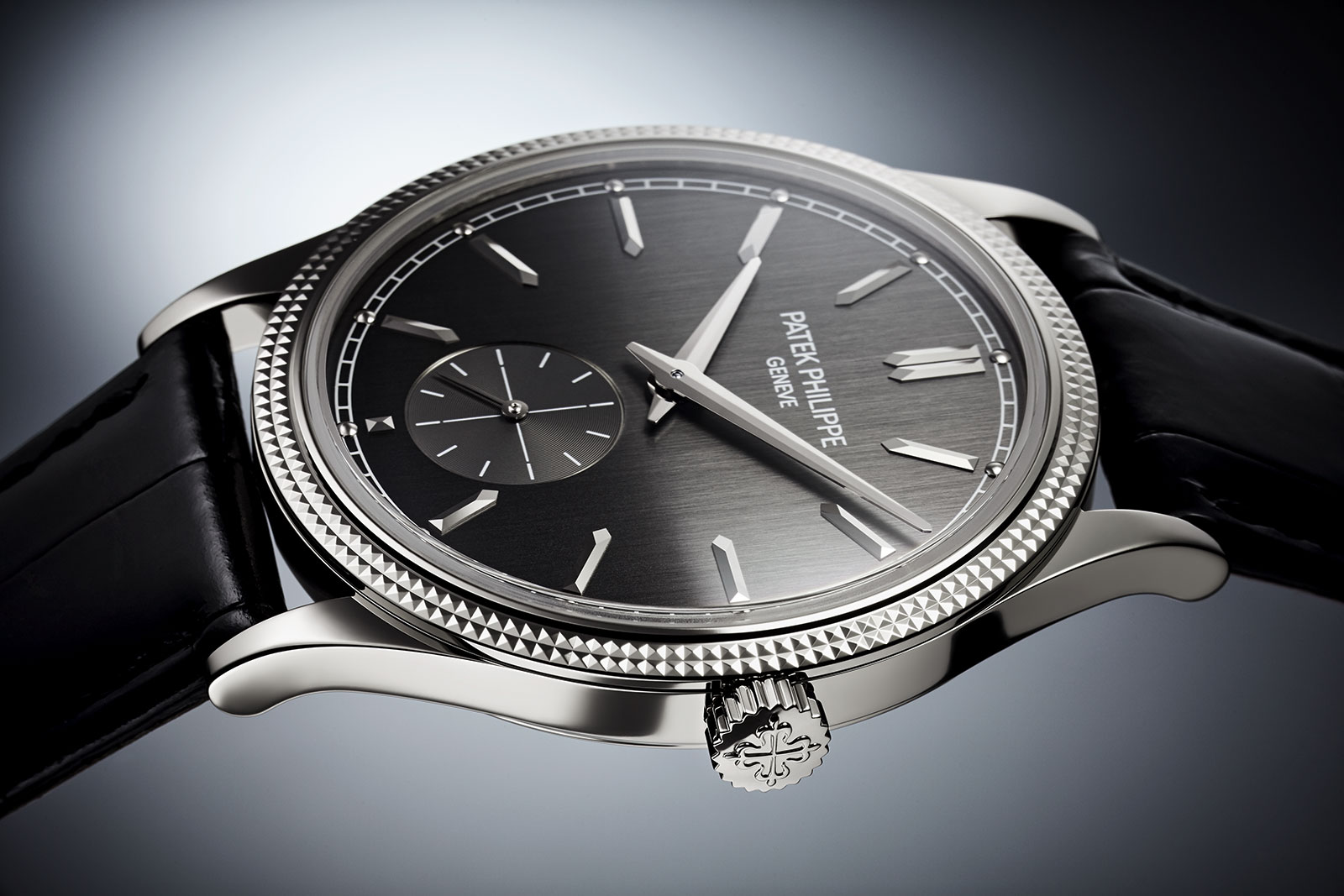 My vote goes towards the white gold model.

Between the two, I’d go for the white gold model; it is understated with its vertically-brushed grey dial, and feels more modern than the rose gold version. In the launch announcement, Patek Philippe describes the ref. 6119 as a model that “reflects the changing preferences of our era” – the white gold model is definitely the more contemporary look.

That being said, the ref. 6119 is superior in its movement, which is finer and arguably higher spec than the competition. And then there’s the fact that it is perhaps the best-looking, while also boasting the most history. 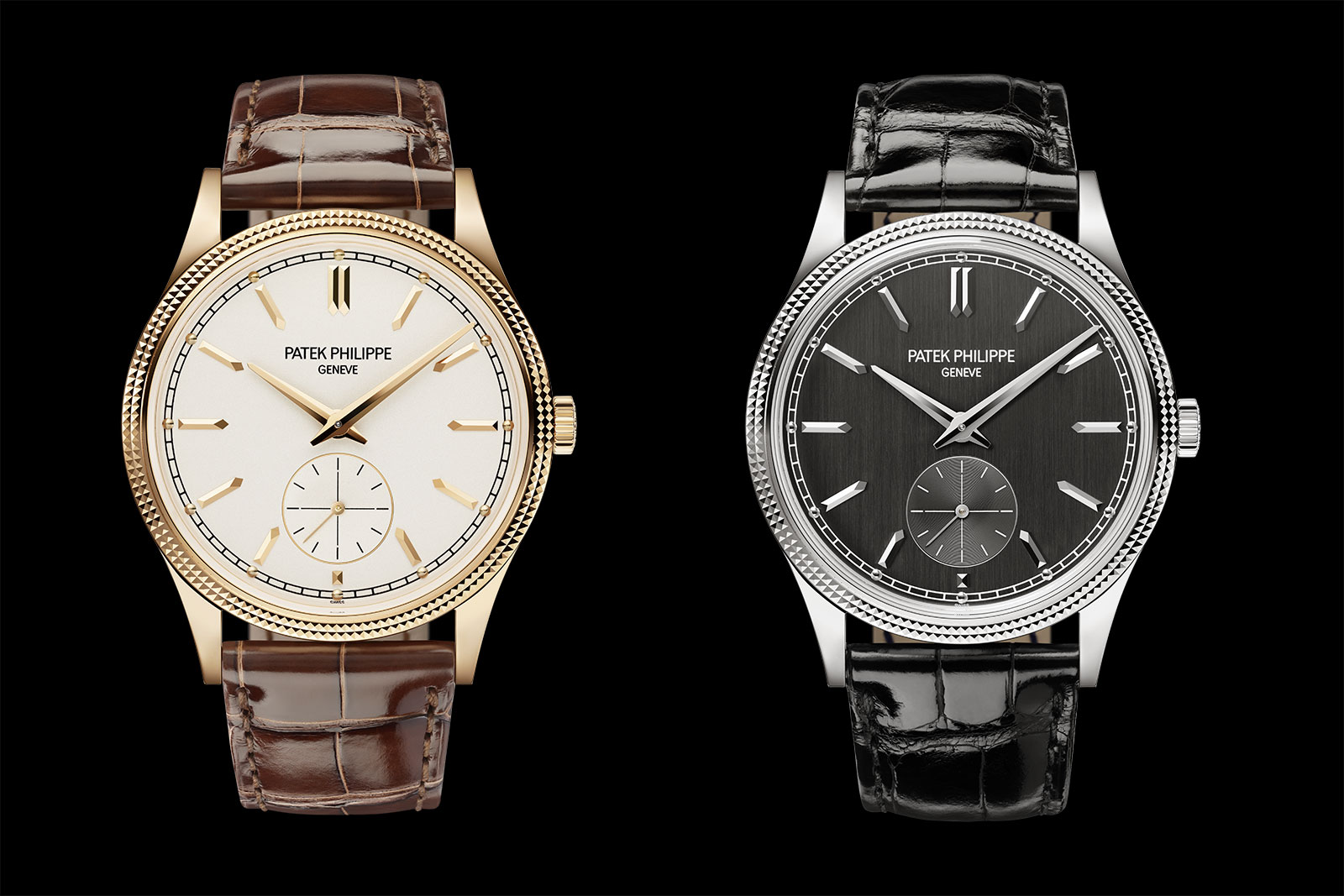 As its name suggests, the ref. 6119 features a Clous de Paris, or hobnail, bezel like that found on the ref. 3919 and ref. 5119. Some of a trademark feature on Patek Philippe watches of the 1980s and 1990s, the hobnail bezel is relatively uncommon today but eminently striking, elevating the decoration of the case without being over the top. The ref. 6119’s bezel has a broader, sloping profile, giving it greater wrist presence. 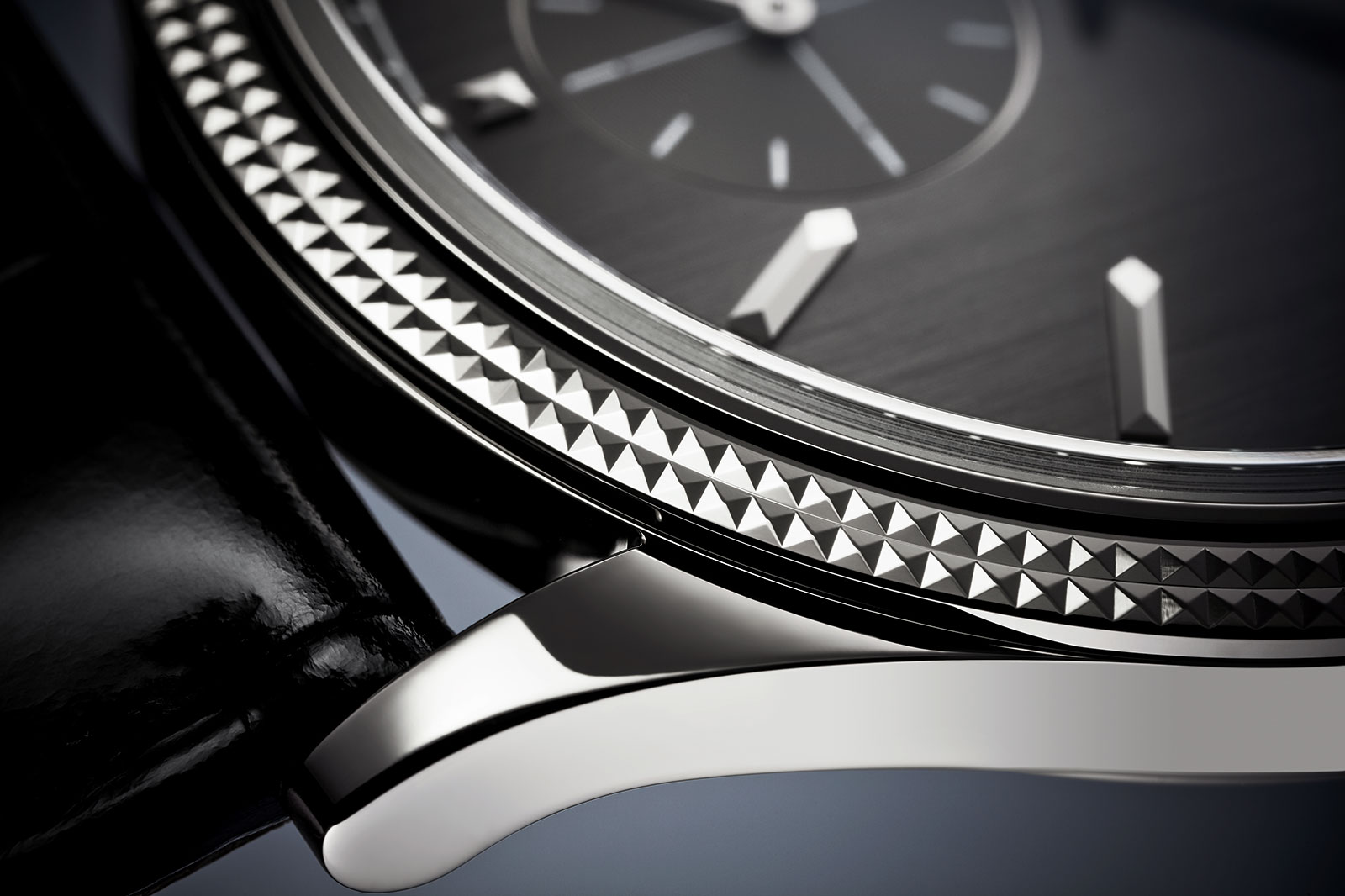 While the dial is restrained in style, it is made up of many thoughtful details. The key element that gives it a more modern appearance is the railroad minute track on the outer circumference. It’s a simple printed track, but enhanced by applied gold spheres for the minute five markers.

The applied “obus” hour markers are solid gold and facetted on four sides, allowing them to catch the light nicely. In addition, dauphine hands have three facets lengthwise, giving them a more prominent look as compared to the slender, flat leaf hands found on past models. 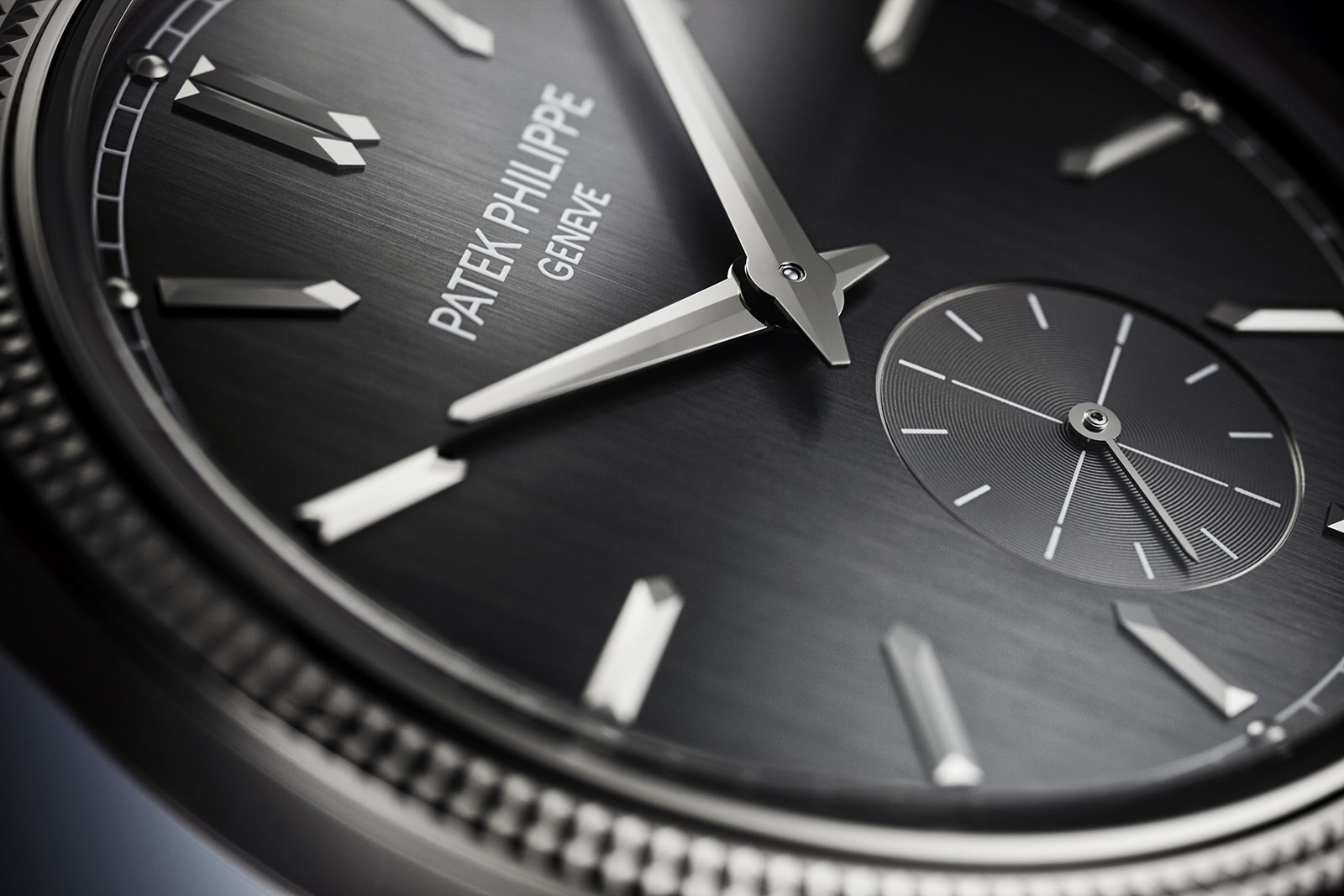 And there’s also plenty of texture. On the white gold model, the dial finished in a pronounced vertically brushing, while the sub-seconds dial is stamped with a concentric pattern and divided into quarters with crosshairs, bringing to mind “sector” dials of vintage watches.

The rose gold version has a more classical grained finish that extends into the seconds register, which is ringed in rose gold to match the case. 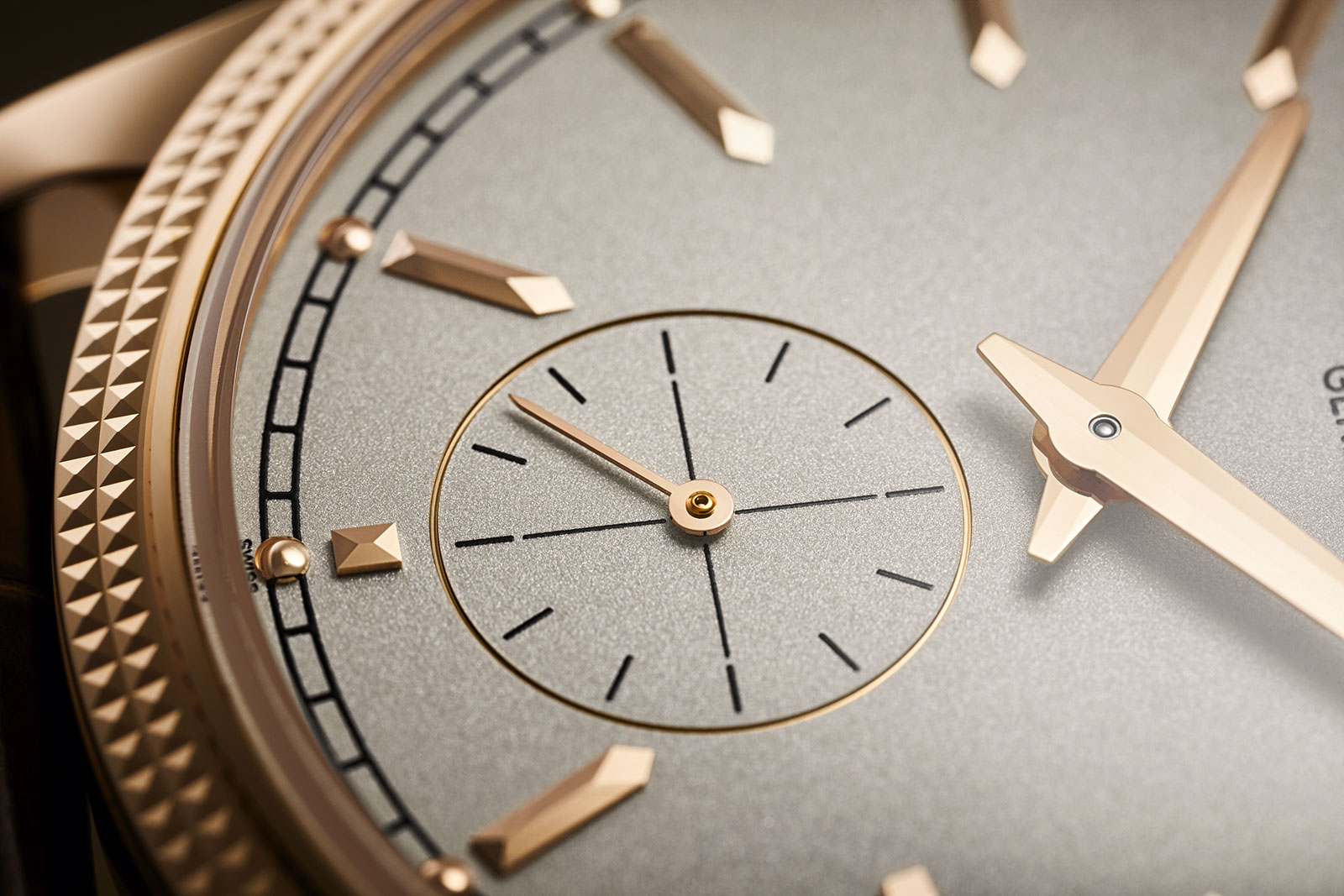 The case design draws on the original Calatrava ref. 96 of 1932, with curved, tapered lugs instead of the straight lugs on the refs. 3919 and 5119. These give the watch a slightly larger footprint, giving it more presence without having to grow the case diameter too much. Despite the larger case, the ref. 6119 remains svelte at just 8.08 mm high, making it a bona fide dress watch. 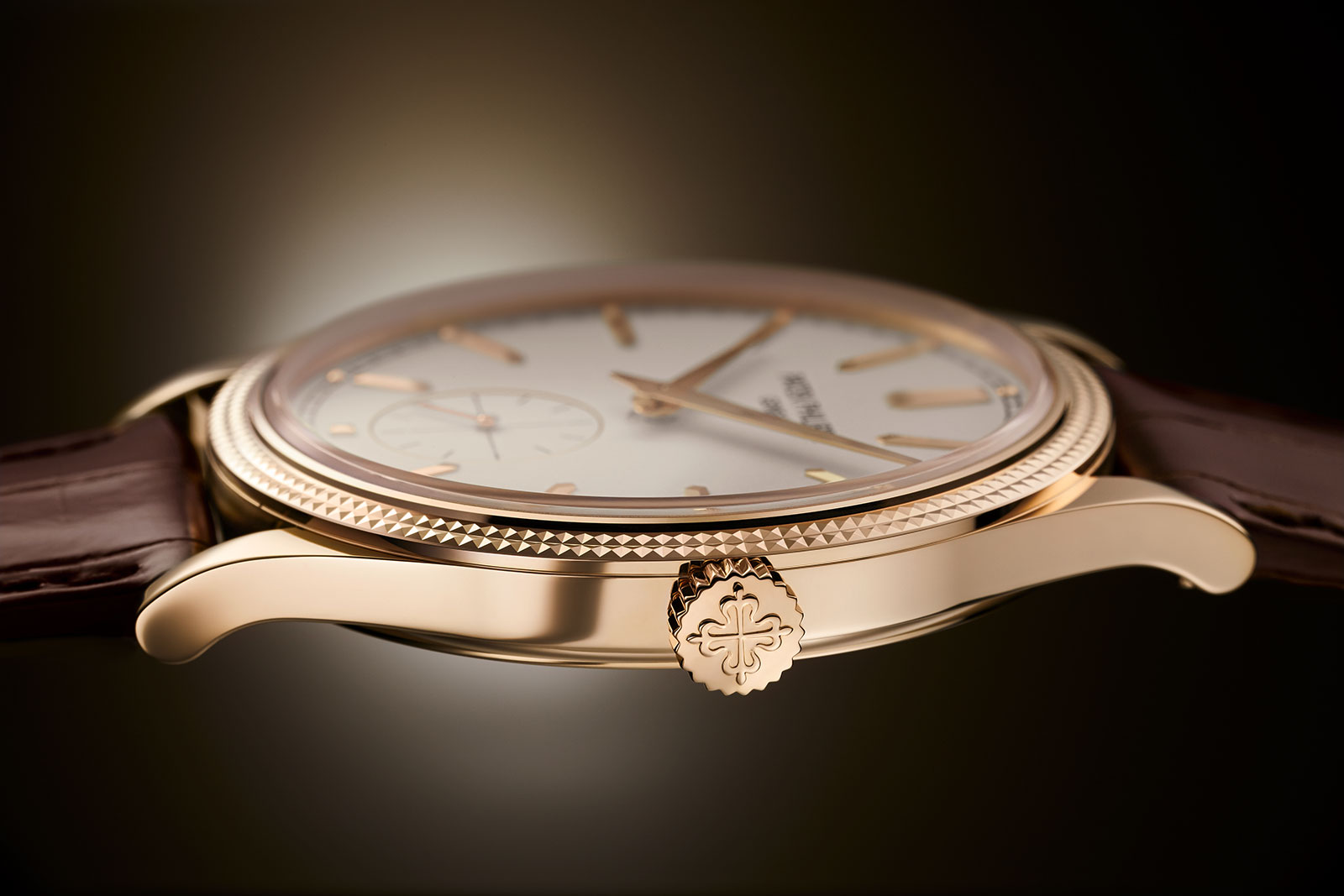 Although it is significantly wider than the cal. 215 PS found in the refs. 3919 and 5119 that was the de facto movement in hand-wind Calatrava models for decades, the cal. 30-255 PS retains the same thickness of 2.5 mm.

Several aspects of a traditional movement construction were reconfigured to help with the thinness. One is a “central pinion without a wheel plate that meshes with the center wheel via an intermediate wheel” – essentially a more streamlined arrangement of the gears – and another are the crown and ratchet wheels that sit under the barrel bridge instead of over. 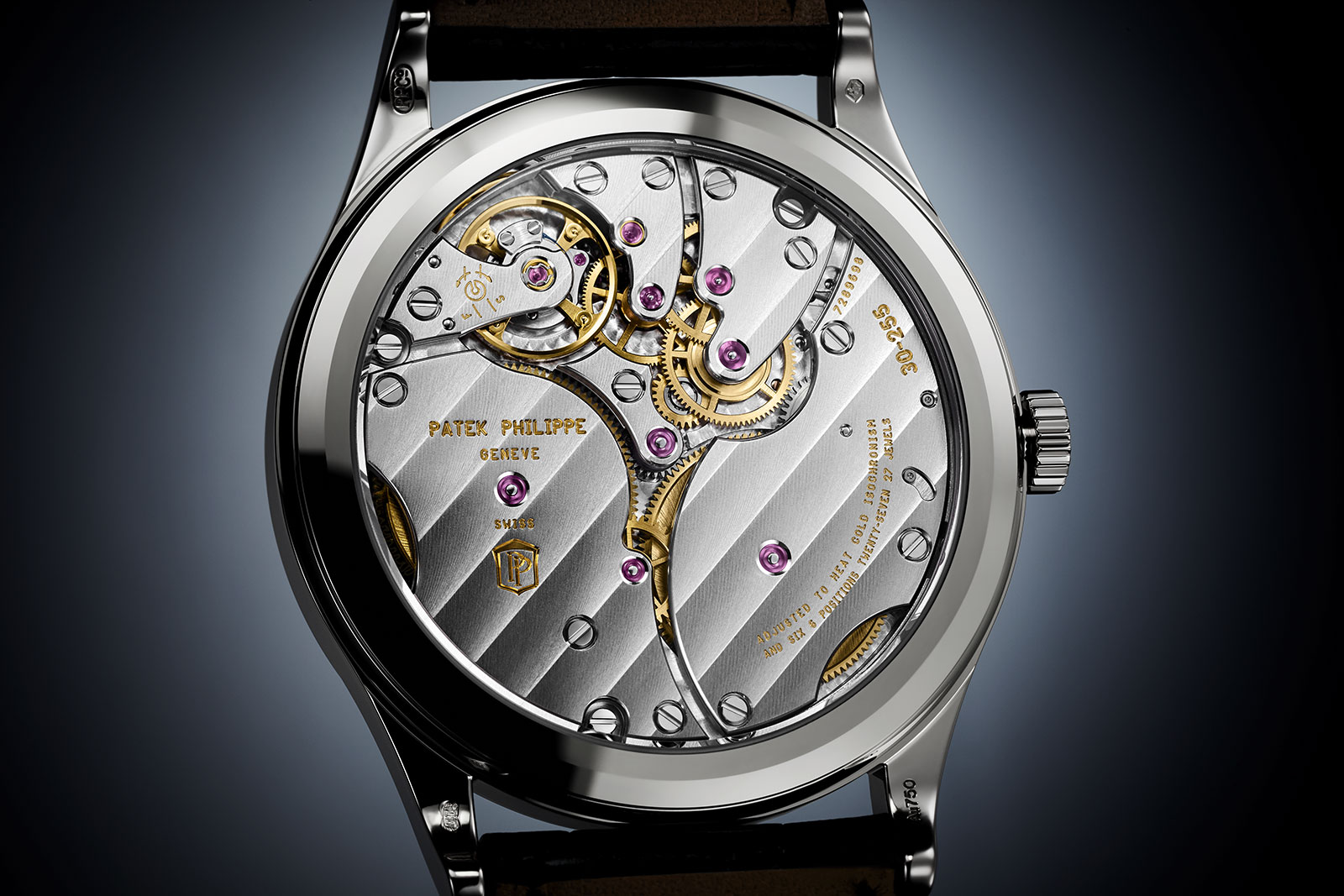 The manual-winding movement boasts 65 hours of power reserve, a stark improvement over the 44 hours of the cal. 215 PS.

It does that with twin barrels that unwind in parallel, or at the same time. The double, parallel barrels increase the torque of the movement substantially: the balance wheel has the highest moment of inertia amongst its 4 Hz movements according to Patek Philippe. In other words, it has excellent HDF. 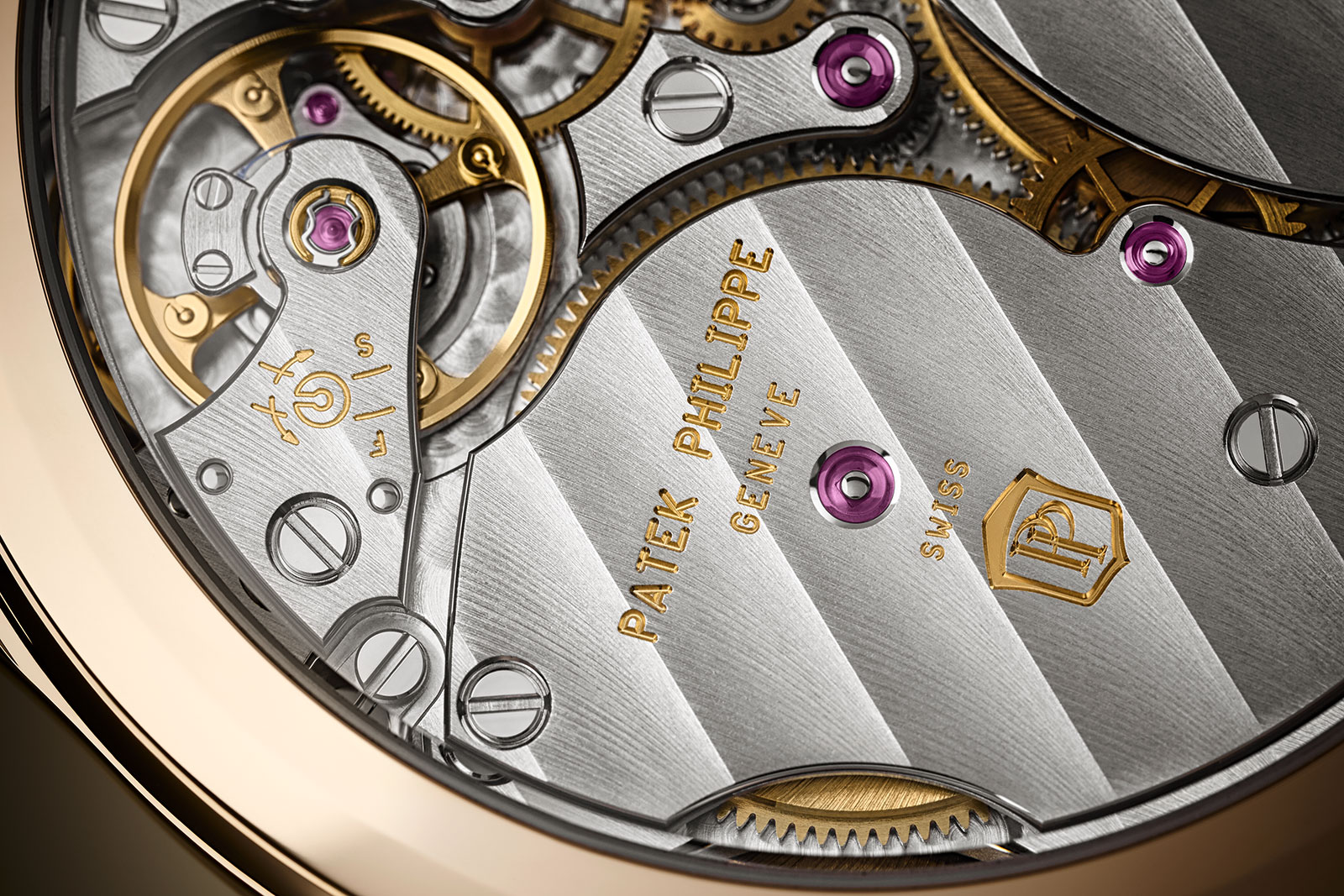 This improves the stability of its beat rate – meaning better timekeeping regardless of external factors like shock – and also allows for easier regulation. And like all movements certified with the Patek Philippe Seal, the cal. 30-255 PS is rated to an impressive -3/+2 accuracy per day.

Notably, the cal. 30-255 PS also appears slightly better finished than its predecessors, showing the usual Cotes de Geneve and perlage, but also improved details like the bevels of the bridges that incorporate sharp external angles. 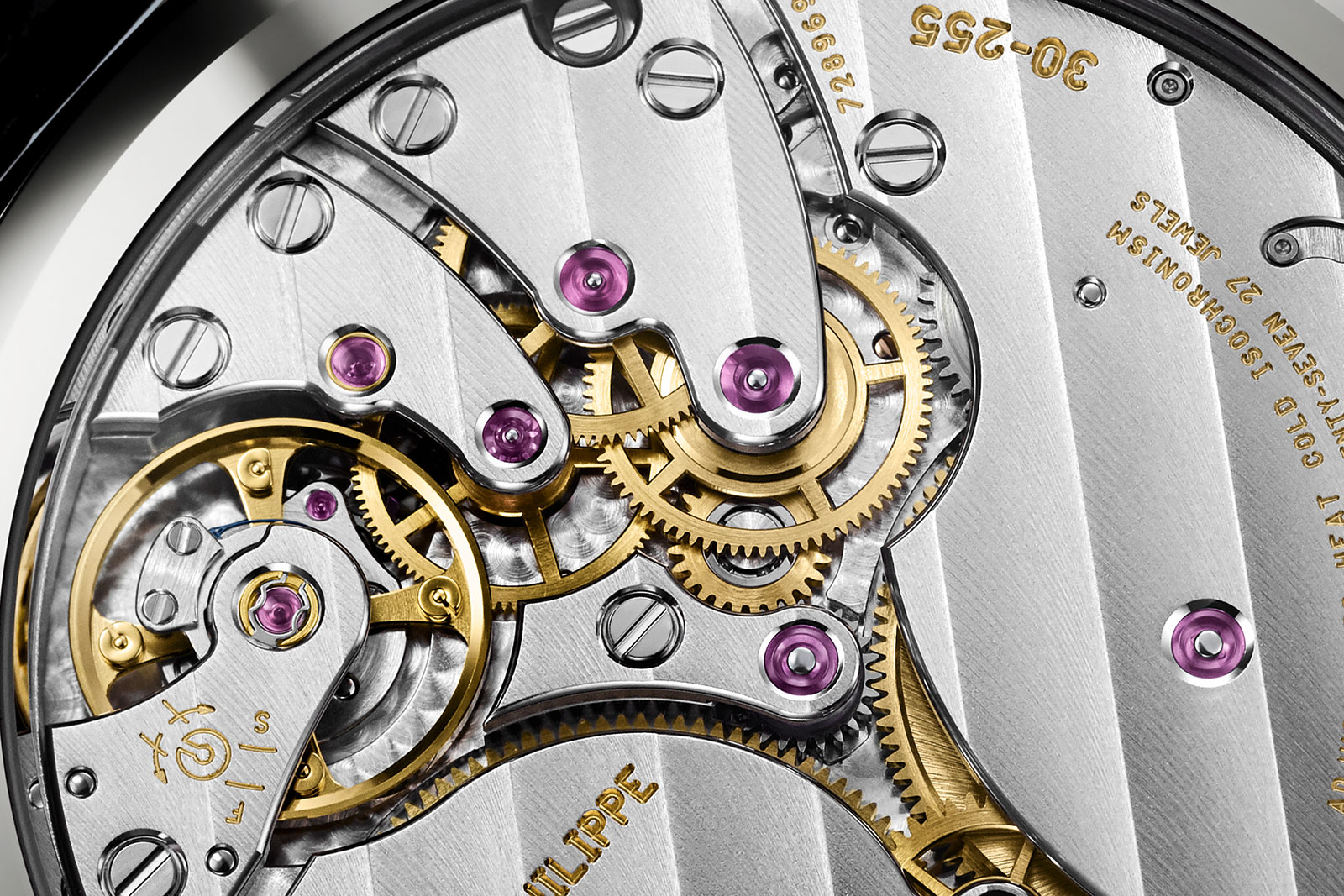 The balance wheel and twin bridges for the going train 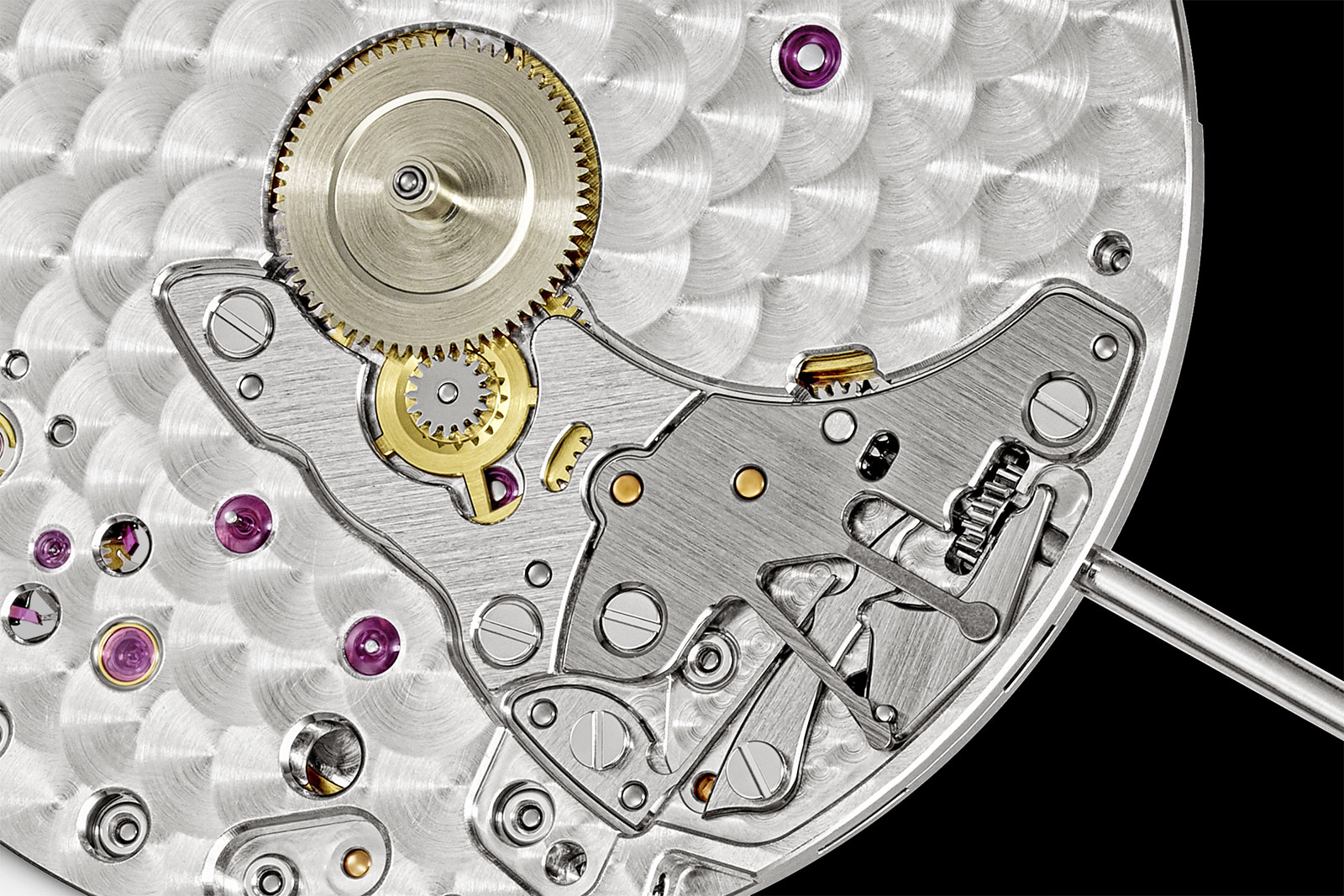 The keyless works under the dial

The new Saxonia Thin 37mm is the most affordable Lange in the line-up, priced at under US$15,000.