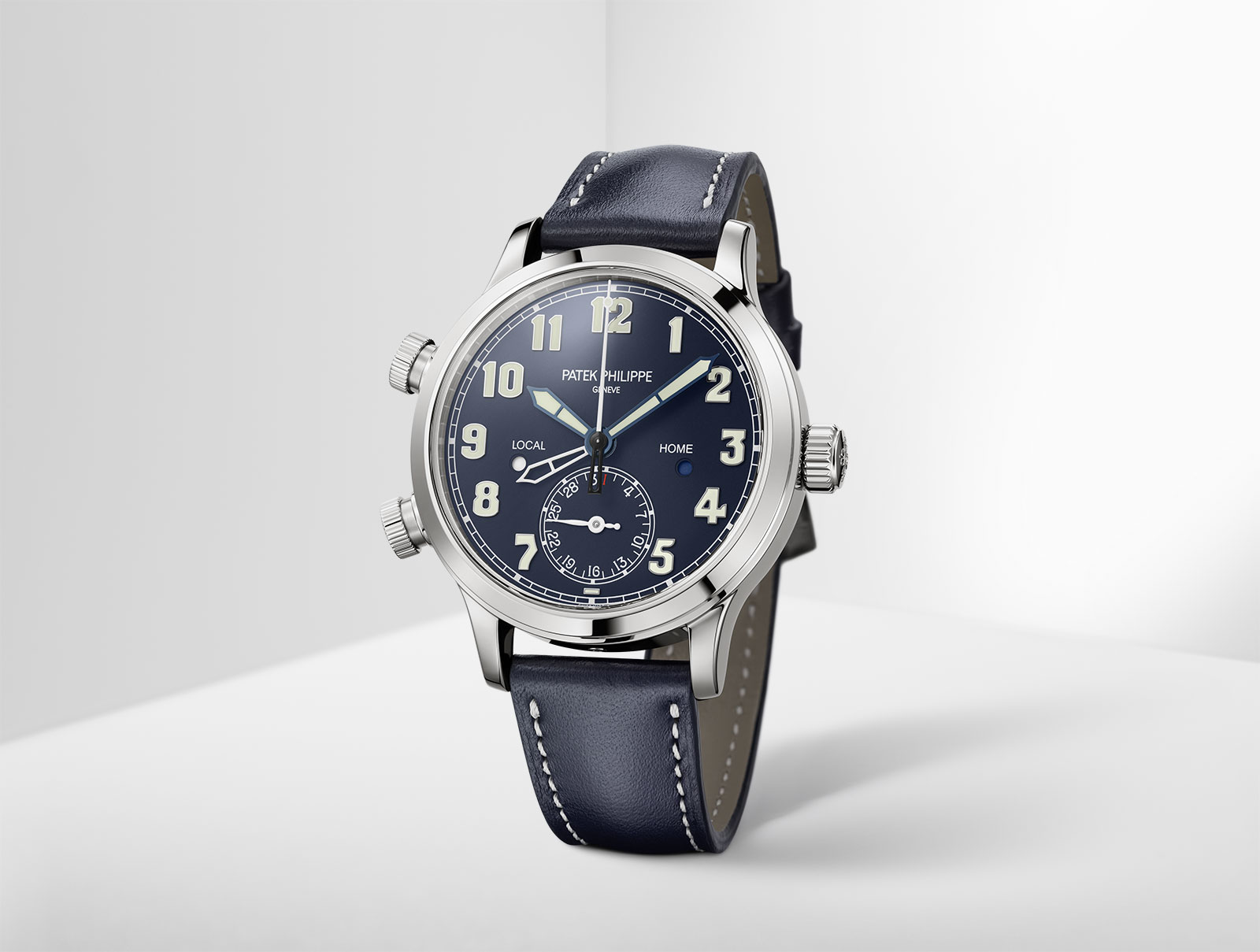 Patek Philippe has just taken the covers off the Calatrava Pilot Travel Time Ref. 7234G-001, a medium-sized take on its original dual-time zone aviator’s watch. Originally launched in pink gold, and then in steel as a limited edition, the compact pilot is now available in white gold.

Now very much a familiar part of the Calatrava range, the pilot’s watch was a surprise when it was first launched. A radically new design for the classical watch manufacturer when it debuted in 2015, the Calatrava Pilot Travel Time sparked some controversy, mainly centred the generic aviator’s watch look and the oversized pushers.

Several additional models later, the Calatrava Pilot is a full collection of watches, ranging from the time-only limited edition made for the New York Grand Exhibition to an alarm that chimes like a repeater, and now the mid-size Travel Time in white gold. 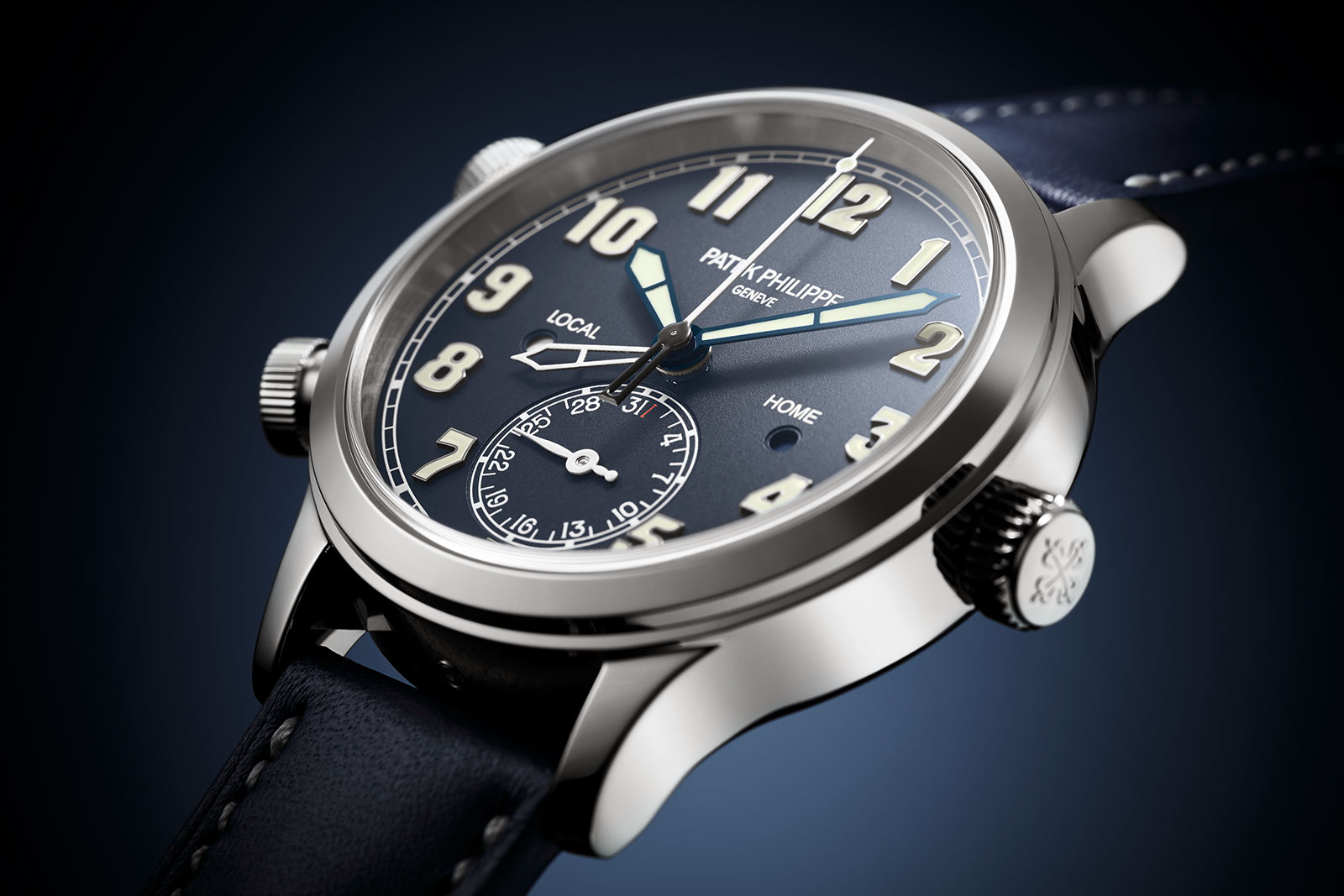 While the sporty look suits the original model with its large 42 mm case, the smaller case appeals to people with more traditional tastes or smaller wrists, making the new mid-size version an intuitive and complementary edition to the line. It’s essentially a more wearable version of an appealing watch.

The Calatrava Pilot Travel Time looks more youthful than the average Calatrava, though that’s changing with recent releases like the ref. 6007A, owing to the oversized numerals and large pushers. Still, in traditional Patek Philippe style, the overall feel is refined for a pilot’s watch; this is perhaps the most refined pilot’s watch on the market. And given the fact that Patek Philippe has shown itself capable of creating classic designs, it will be interesting to see how the Pilot design ages. 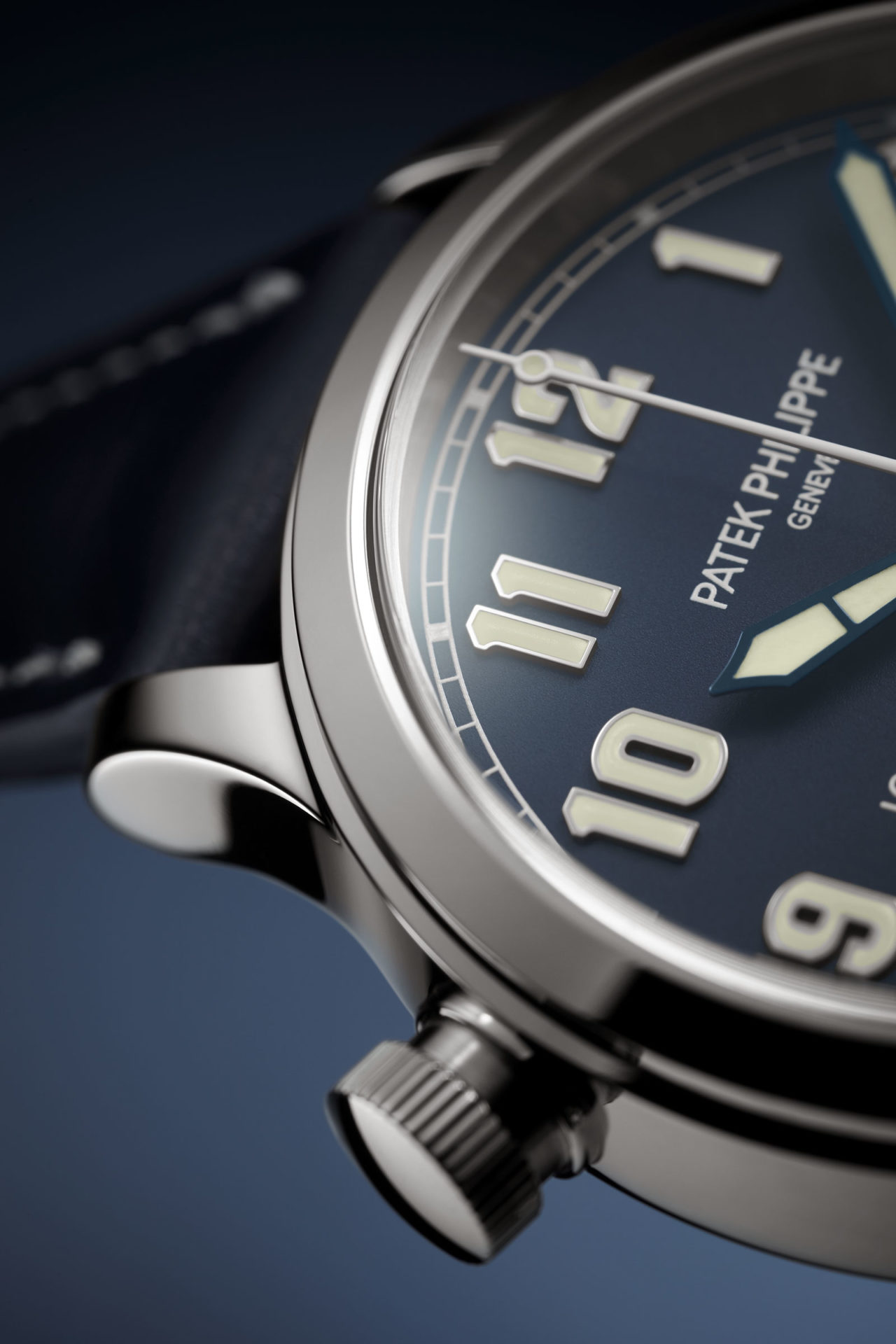 While the watch is smallish, it has a big price tag of US$48,500. Though that puts the Pilot Travel Time in the same ballpark as competitors like the Overseas Dual Time, the Pilot is simpler in terms of case finish and construction. But there is always a Patek Philippe premium to the brand’s watches that’s arguably justified by its history, and more importantly, consistency.

A departure from the brand’s usual offerings, the Pilot Travel Time is contemporary and slighty quirky, which makes its less serious, in a good way. It shows a compact, slim, and moderately complicated watch can be reasonably fun. 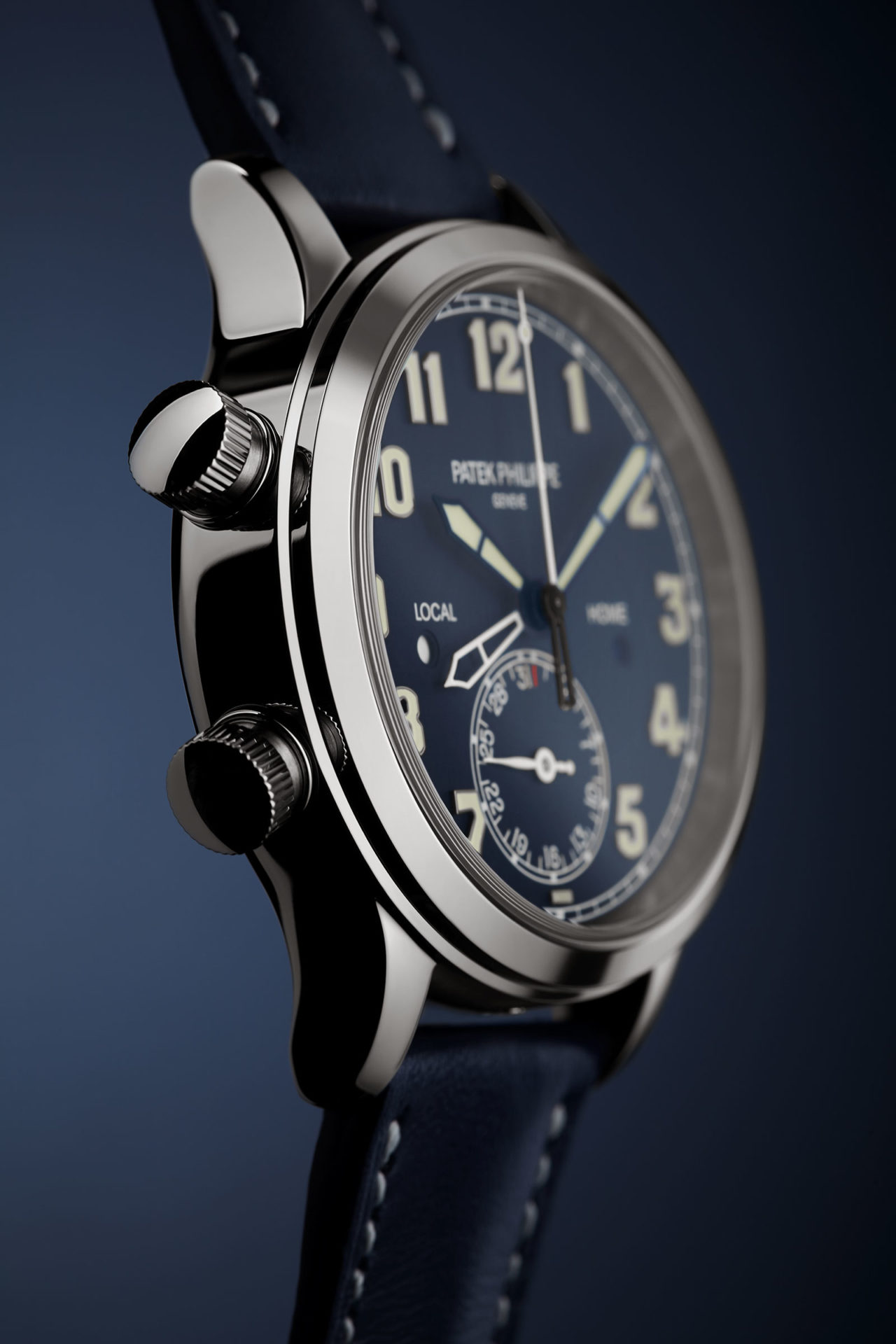 Nearly every feature of the mid-size variant is identical to the original, larger version, from dial colour to complication to typography. For that reason, it is similarly easy to operate and read.

Amongst its useful feature is the ability to hide the white home-time hand under the blue local-time hand when there’s no need to track a second time zone (which is probably most of the time during the pandemic). And the pushers are secure but user friendly: a quarter turn is required to unscrew the pushers, so as to prevent accidental adjustment of the time zone. 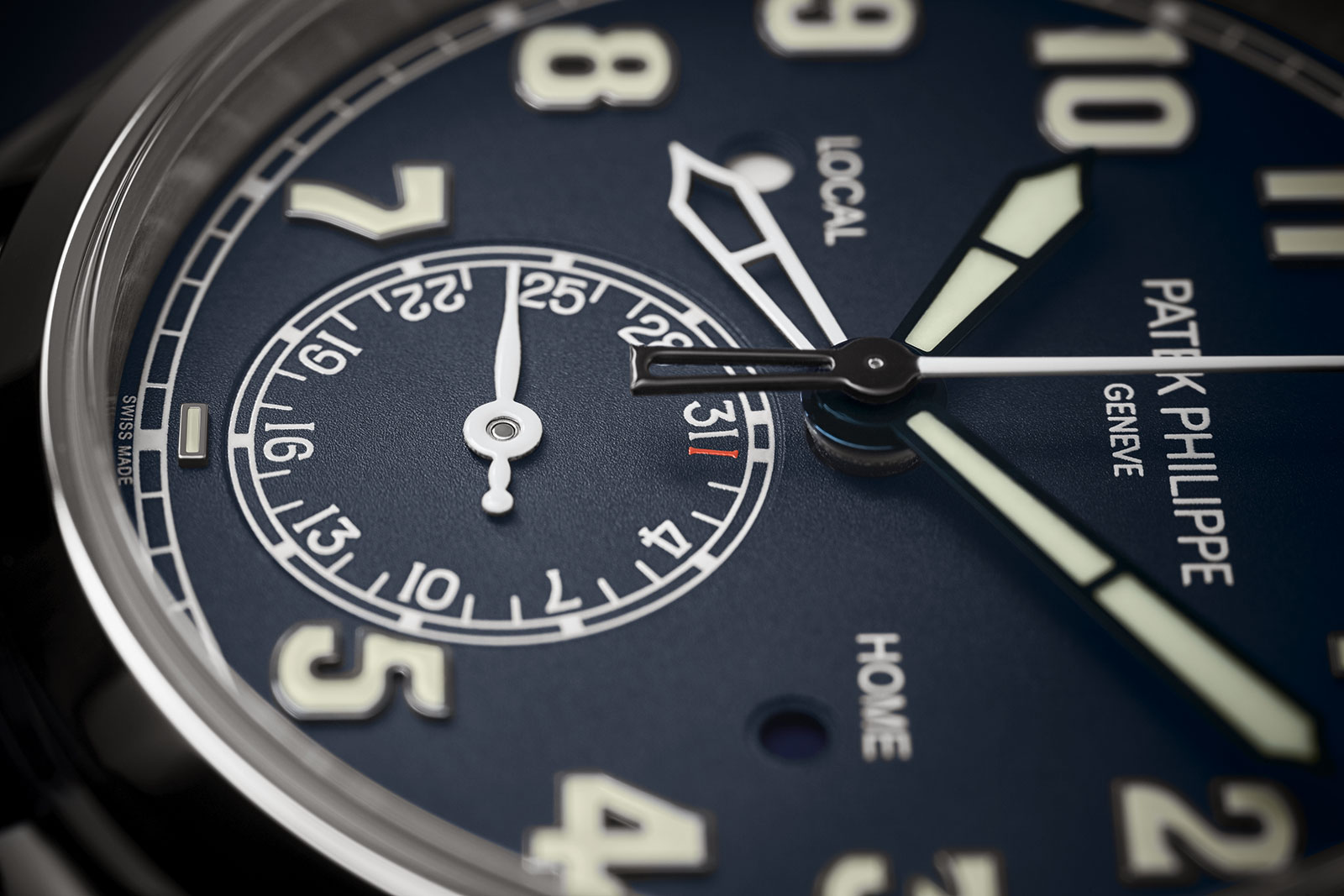 While the movement is the cal. 324 S C FUS found in the 42 mm version, it is more proportional in the mid-size case. While not finished to an artisanal standard, it is balanced in terms of aesthetics, construction, and technology. The technology includes the adjustable-mass Gyromax balance wheel, which is decades old, and Spiromax silicon hairspring, which is just a few years old. And like all Patek Philippe movements, the cal. 324 S C FUS is thin, resulting in a watch that’s just 10.24 mm high – svelte for a pilot’s watch. 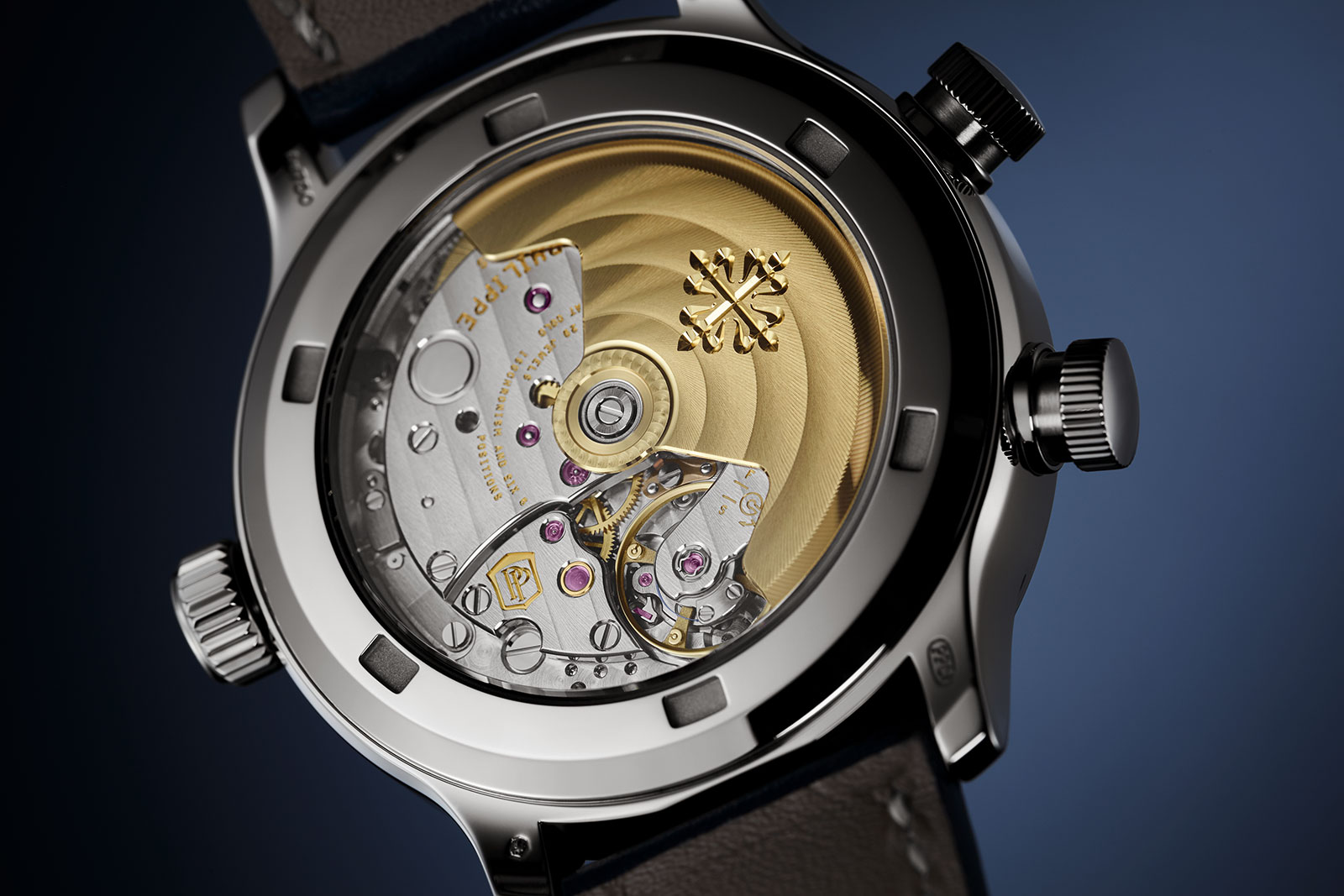 Availability: Now at boutiques and authorised retailers
Price: US$48,500; or 63,900 Singapore dollars.

To be sold for charity at Christie's.

The steel Pilot for ladies.