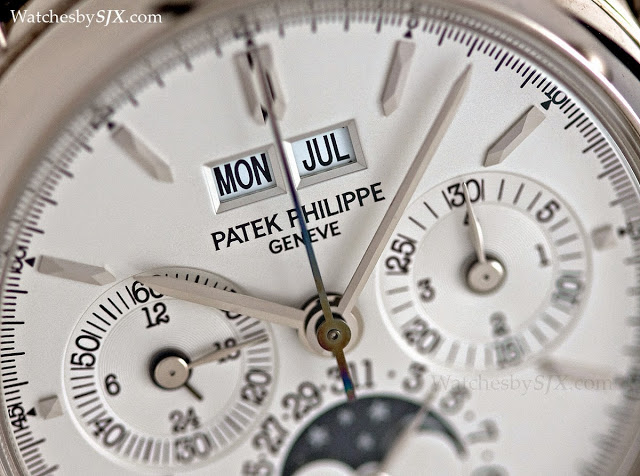 The introduction of the Ref. 3970 in 1986 marked the start of the modern era of chronograph with perpetual calendar watches from Patek Philippe. Equipped with the CH 27-70, based on the Lemania 2310, the Ref. 3970 was without peer in its time; even Vacheron Constantin did not have a comparable watch until the year 2000.

This complication has always been one of the pillars of Patek Philippe’s line of complicated watches, starting with the ref. 1518 and then ref. 2499. Both of which used Valjoux ebauches and are today some of the most desirable Patek Philippe chronographs.

After those two came the ref. 3970 but it has never been seen in the same light. On the secondary market the ref. 3970 is the least expensive of all the Patek Philippe chronographs with perpetual calendar.  Because of the relatively large numbers produced – the commonly cited figure is about 4000 for the ref. 3970 while for the ref. 2499 it’s only 349 – the ref. 3970 has never been as sought after. Even its successor, the larger ref. 5970 with an identical movement, is more valuable because of its shorter production run and presumably fewer numbers. Over its 19 year production, the ref 3970 was made in three series, with the first two have feuille, or leaf-shaped, hands; there were also some extremely rare variants with dauphine hands. The third and most common third series watches have baton hands, as pictured here in white gold with the standard silver dial (far less common were black, diamond-set dials or custom dial colours). According to Antiquorum, the key characteristics of each generation of the ref. 3970 is as follows (there are additional minor differences in terms of fonts, logos and the like): 1st series: Ref. 3970 with snap on case back, feuille hands and baton hour indices, less than 100 pieces made. 2nd series: Ref. 3970E (for etanche or water-resistant) with solid screw on case back, also ref. 3971 with screw on sapphire display back; both with feuille hands and baton hour indices. Some rare 3970 second series (as opposed to 3971) have display backs. 3rd series: Ref. 3970E with both sapphire and solid case backs, fitted with baton hands and pointed hour markers, as photographed here.

All of the ref. 3970 have the same 36 mm case, which is somewhat small by today’s standards, and even smaller than the preceding ref. 2499 which was 37.5 mm wide. The ref. 3970, and also other Patek Philippe high-end complications, demonstrates the fine craft of Swiss watchmaking which the brand was practiced consistently – more so than any other watchmaker – for many, many decades. Every component is well and correctly finished. Though based on a Lemania ebauche, the CH 27-70 was heavily modified by Patek Philippe. In fact of all the brands which used the same Lemania movement, Patek Philippe’s version stands out as the most elaborate. In a time when rival brands were executing their movements adequately, Patek Philippe was doing it very well, as it always did. The ref. 3970 will never eclipse its cousins in collectability or rarity (except for the current generation ref. 5270 perhaps), but it is an important part of Patek Philippe’s impressive chronograph lineage.  – SJX