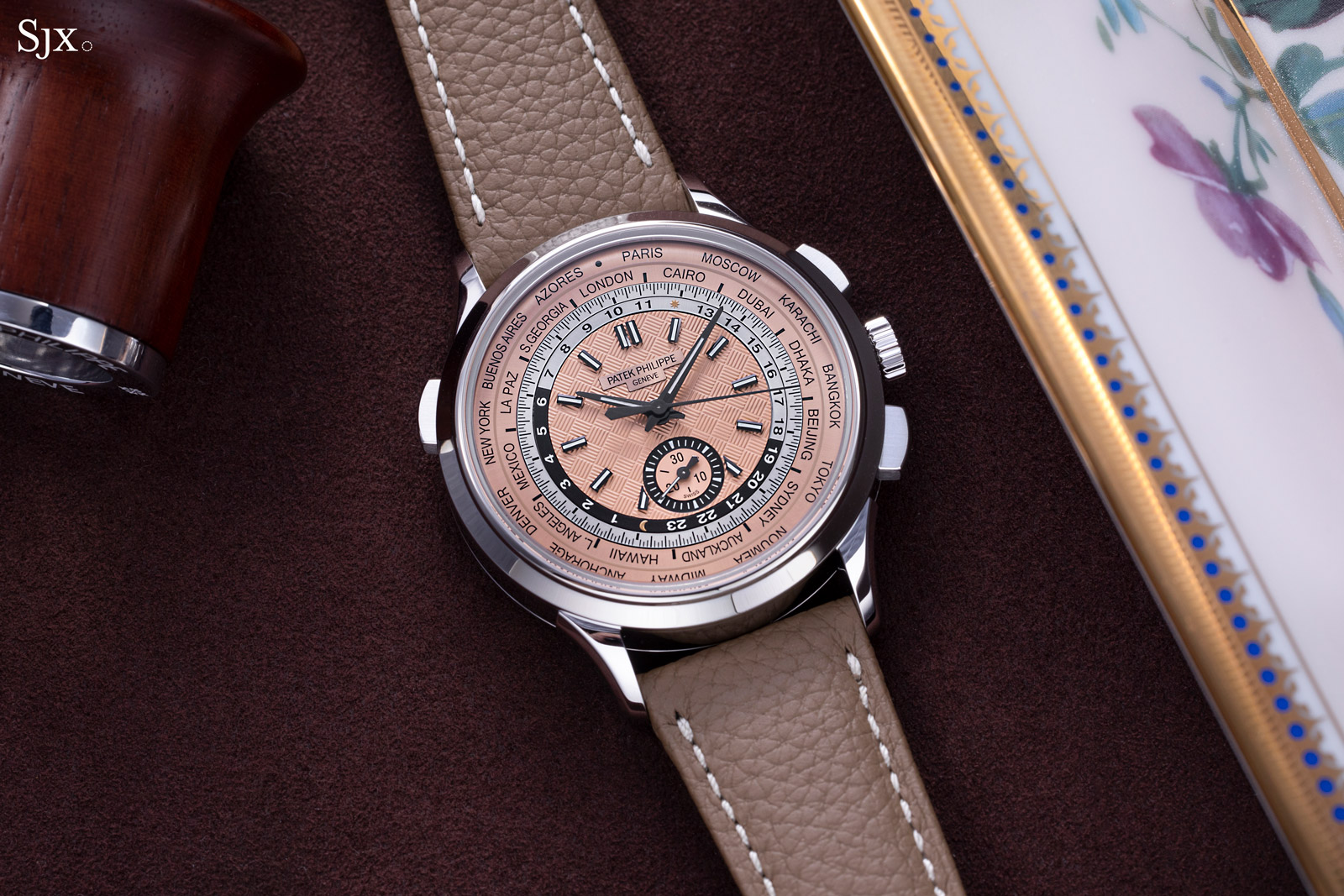 While much of the buzz around Patek Philippe’s recent launches has been centred on the Nautilus ref. 5811/1G in white gold, the year has been mostly about other than the Nautilus and Aquanaut. Amongst the most notable new launches for 2022 is the World Time Flyback Chronograph ref. 5935A-001.

Continuing with Patek Philippe’s development of steel watches beyond its traditional sports models, the ref. 5935A is a striking new take on a model that made its debut in 2016. Previously available only in precious metals (namely white gold or platinum), the ref. 5935A is the first of the model in stainless steel – and one of the brand’s few complicated watches in the metal. And the ref. 5935A is larger in diameter than its predecessor, but its most eye-catching feature is the dial in “rose-gilt opaline” (or “salmon” if you wish). 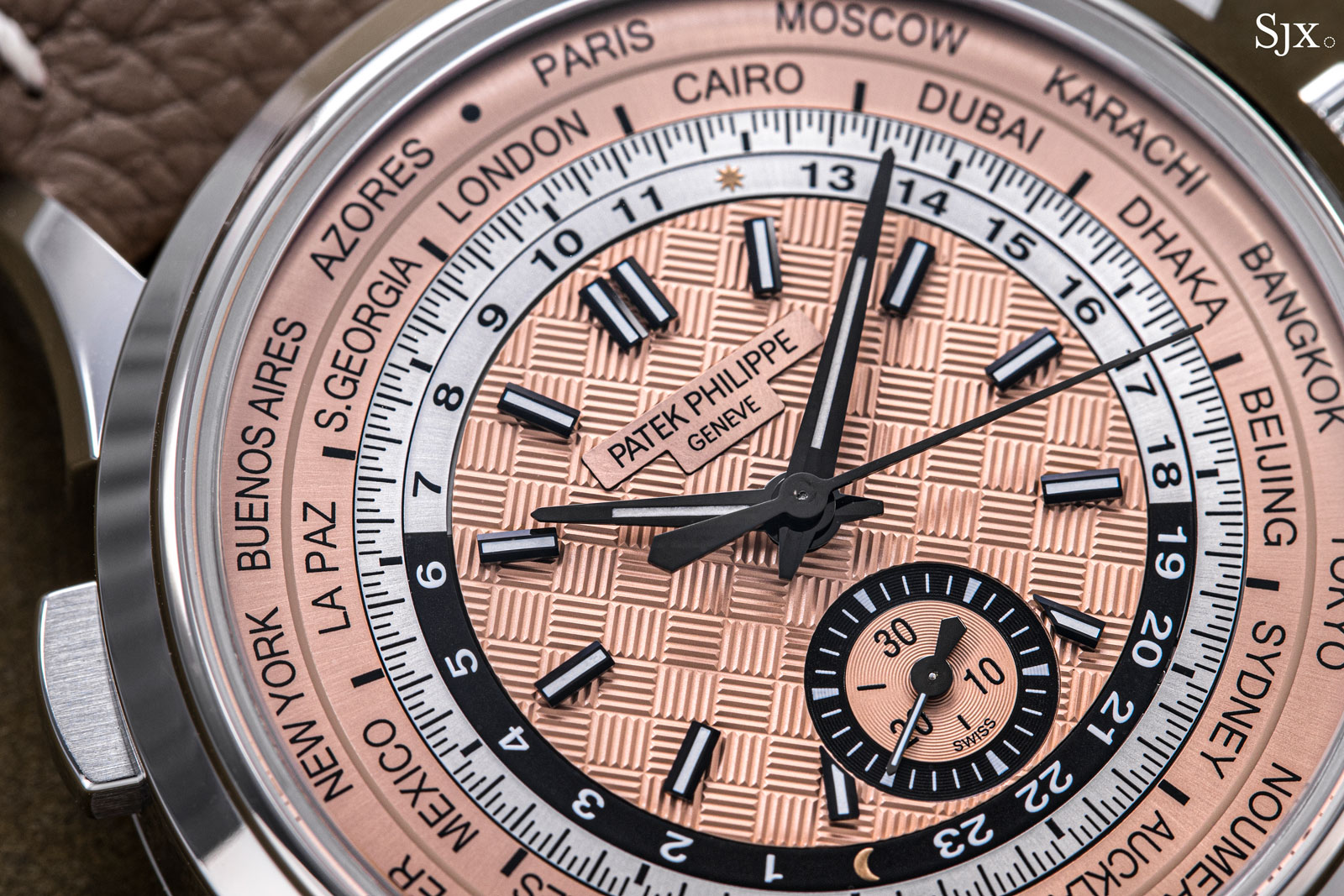 A World Time in steel is a big deal because the world time is arguably an iconic watch for Patek Philippe. Select vintage examples are amongst the handful of Patek Philippe references that can sell for high-seven or even eight figures.

Granted the ref. 5935A adds a chronograph into the mix, but it is still modern take on a signature complication. The ref. 5935A retains the familiar Louis Cottier-type world time display that’s almost synonymous with Patek Philippe, but with contemporary materials and colours. And at 41 mm it is also larger than usual for a Patek Philippe complication, giving it something of a sporty feel. 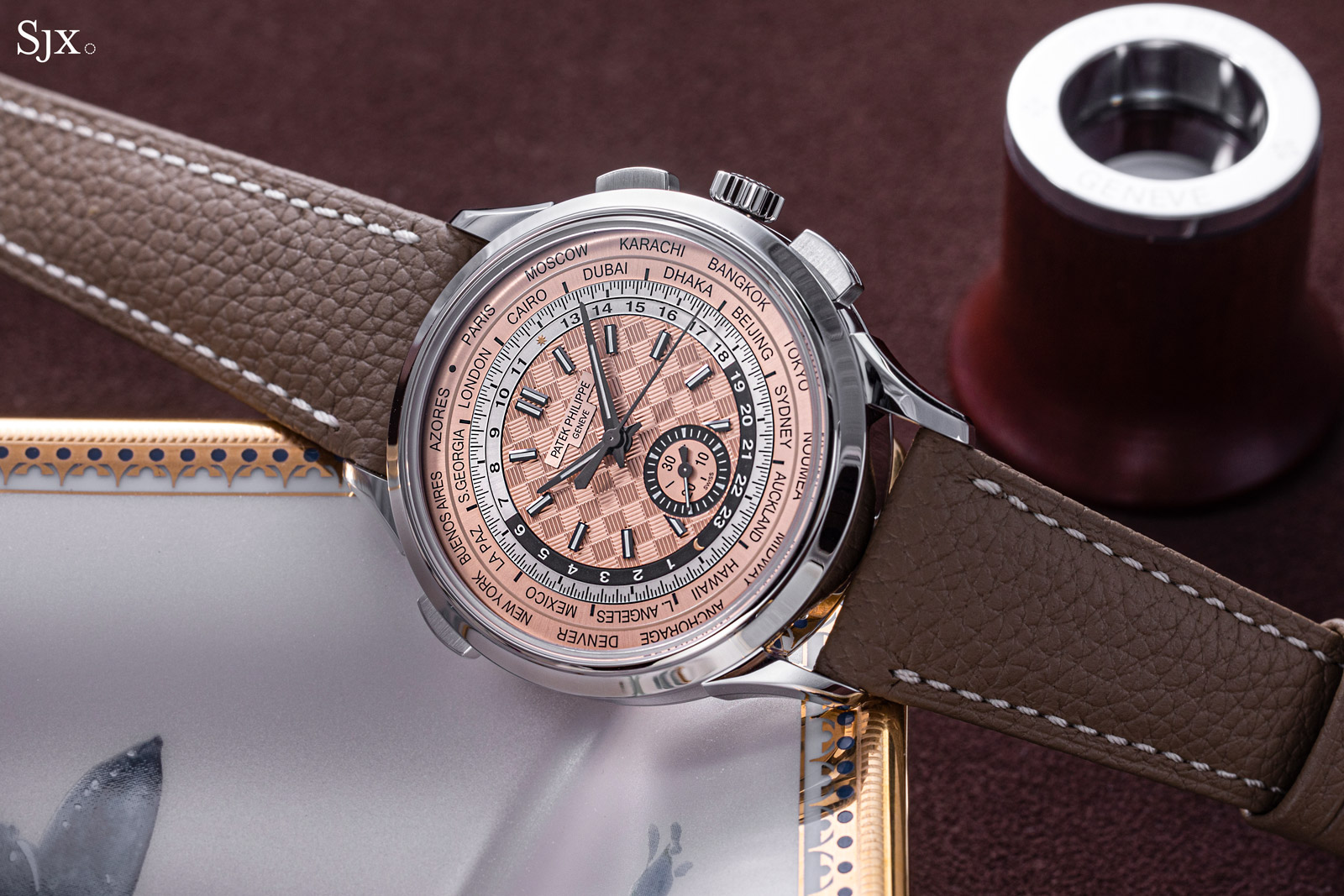 Naturally, the dial is probably the biggest selling point of the watch for many. Often known as “salmon” or copper, the pinkish hue is currently a fashionable colour – I’m a big fan of the shade myself – and appropriate for this particular model.

For one, the colour has typically only been found in platinum watches or special editions. But recently Patek Philippe has been introducing the colour into a wider range of models, including the ref. 5320G and ref. 5172G. The addition of the popular colour into these models is a shrewd method of boosting their visibility and popularity, perhaps diverting attention away from the Nautilus and Aquanaut. The ref. 5935A is larger, lighter, and a little louder than the average Patek Philippe complication, making it a compelling alternative for anyone who likes the world time, or complications more generally, but wants a more casual and modern aesthetic.

And in part because of the steel case, the ref. 5935A is an entry-level model, at least by the benchmarks of Patek Philippe’s complicated watches. At just over US$63,000, it is hardly a value proposition – something rarely used to describe a Patek Philippe anyway – but it is one of the most affordable complicated watches in the catalogue, as well as one of the more interesting. 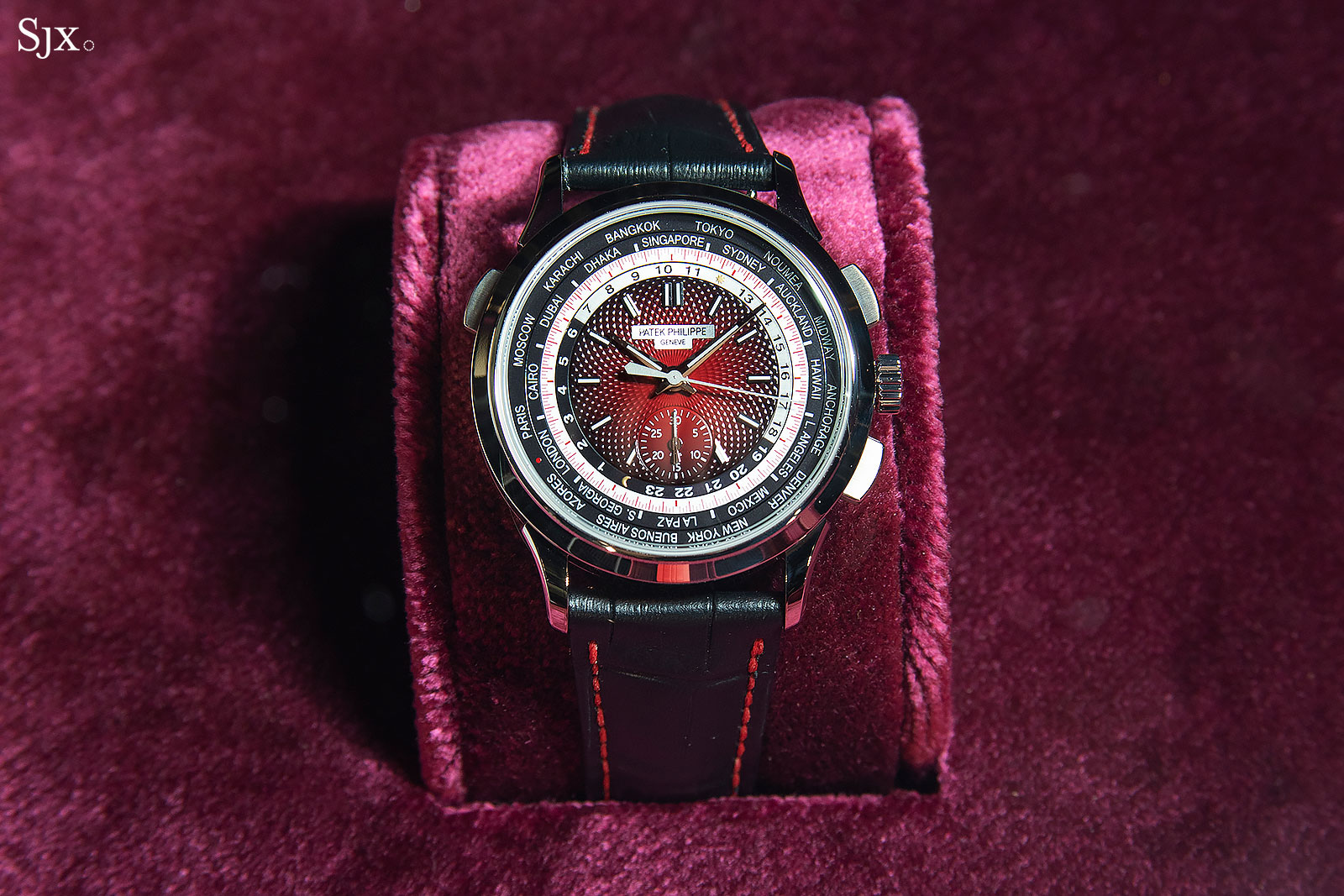 The ref. 5930G limited edition with a gradient red dial made for the 2019 Grand Exhibition in Singapore

Beyond its rarity, steel is a robust material and arguably more versatile from a visual perspective since it can be casual or formal. Despite being larger than its predecessor, the ref. 5935A is lighter due to the case material. Despite being larger – it’s 41 mm versus 39.5 mm of the platinum model – it doesn’t look or feel substantially larger. It is, however, striking on the wrist because of the dial colour, which also gives it the feel of a sporty, everyday watch (though not exactly a sports watch).

Side aside, the case is identical to its precious metal counterpart. Entirely polished, it has the same “winglet” style lugs inspired by the vintage ref. 2523 world time. And the buttons on the case are identical: chronograph pushers at two and four o’clock, along with the world-time button at 10 o’clock.

While the case quality is excellent, the finishing is uniform. A little more variation in the case finishing would have made it more appealing, especially since the shape of the lugs lend themselves to alternating surface finishing. That would also better differentiate this from the precious metal version.

The only thing I would definitely change about the case is the strap, which feels a lacklustre relative to the look of the watch (and also its price). The watch is delivered with a pair of straps in the same colour, one in grained calfskin and the other in nubuck, but both feel a little too thin for the case. 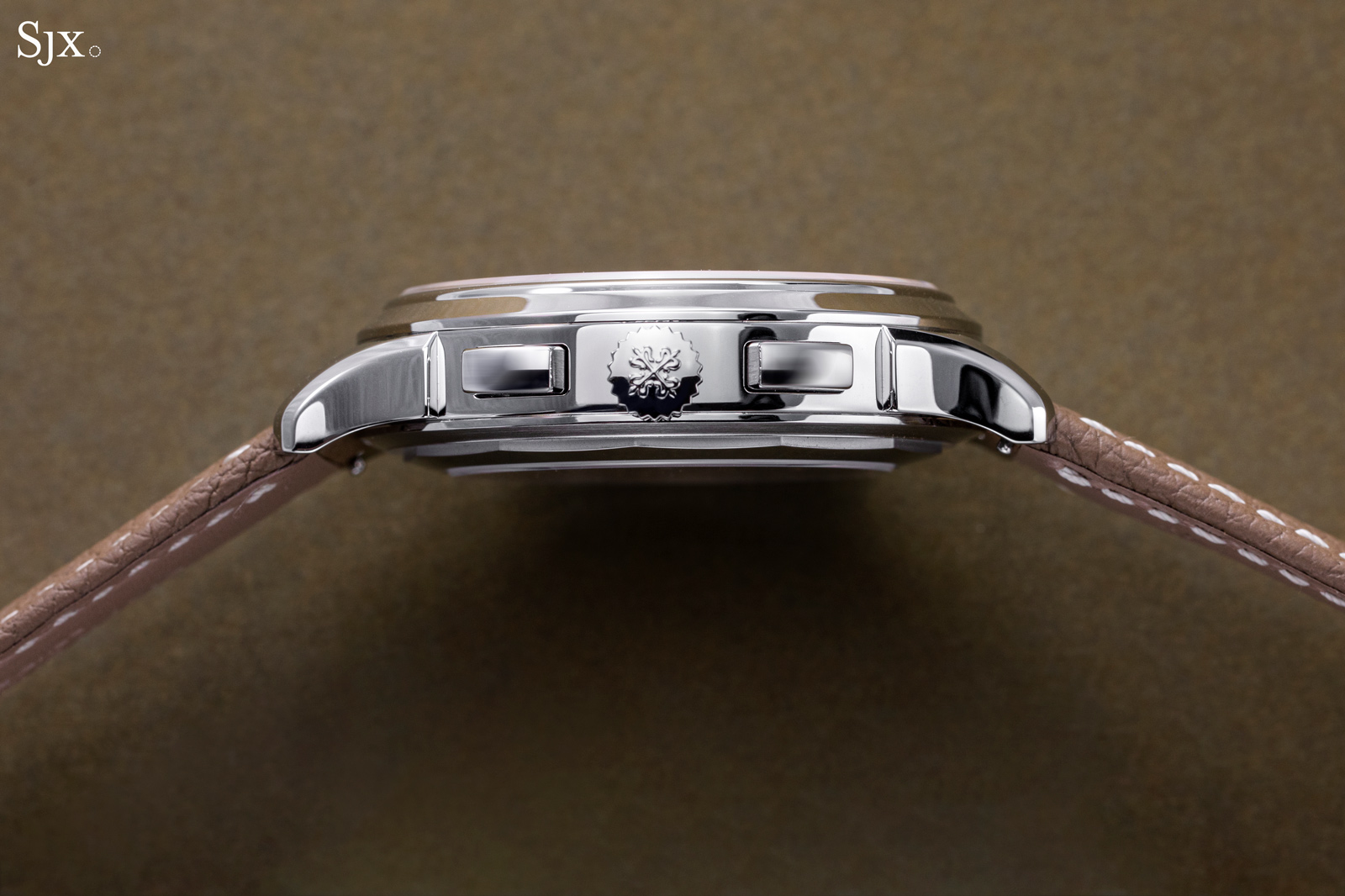 Undoubtedly, the highlight of ref. 5935A is the dial. Described as “rose-gilt opaline” by Patek Philippe, the dial is finished with the “carbon” motif that was first seen in the Calatrava ref. 6007A made to commemorate the completion of the brand’s new headquarters in Geneva. It is this prominent pattern that gives the watch the casual vibe, which complements the stainless steel case.

Although Patek doesn’t specify the nature of the pattern, it appears to be stamped and done extremely precisely. Traditional, engraved guilloche would have been a bonus, but Patek Philippe only offers that on its top-of-the-line complications or Rare Handcrafts, all watches with a six-figure price tag. This retails for a bit over US$63,000, making it an accessible complication by Patek Philippe standards. 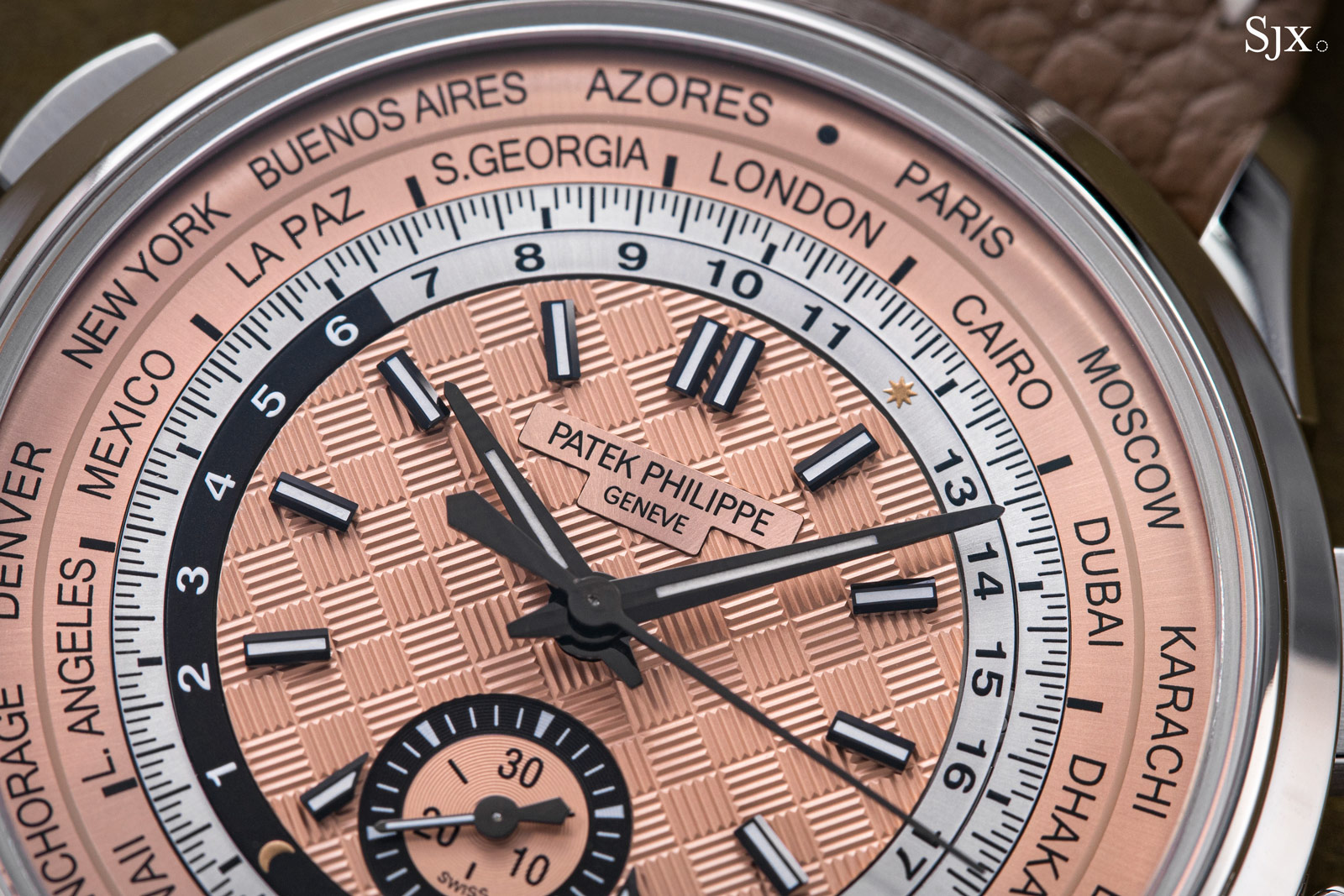 The world time disc lists 24 cities, each corresponding to their respective time zones shown on the inner 24-hour scale Notably, the guilloche central portion appears to be the same size as that on the smaller ref. 5930P. Instead it is the world time rings that are larger to fit the enlarged case. The proportions of the ref. 5935A are arguably better than that of its smaller cousin, since the cities disc feels like crowded.

But the downside of the central portion remaining the same size is the 30-minute register at six o’clock, which still remains tiny. It is legible enough but feels unnaturally small. 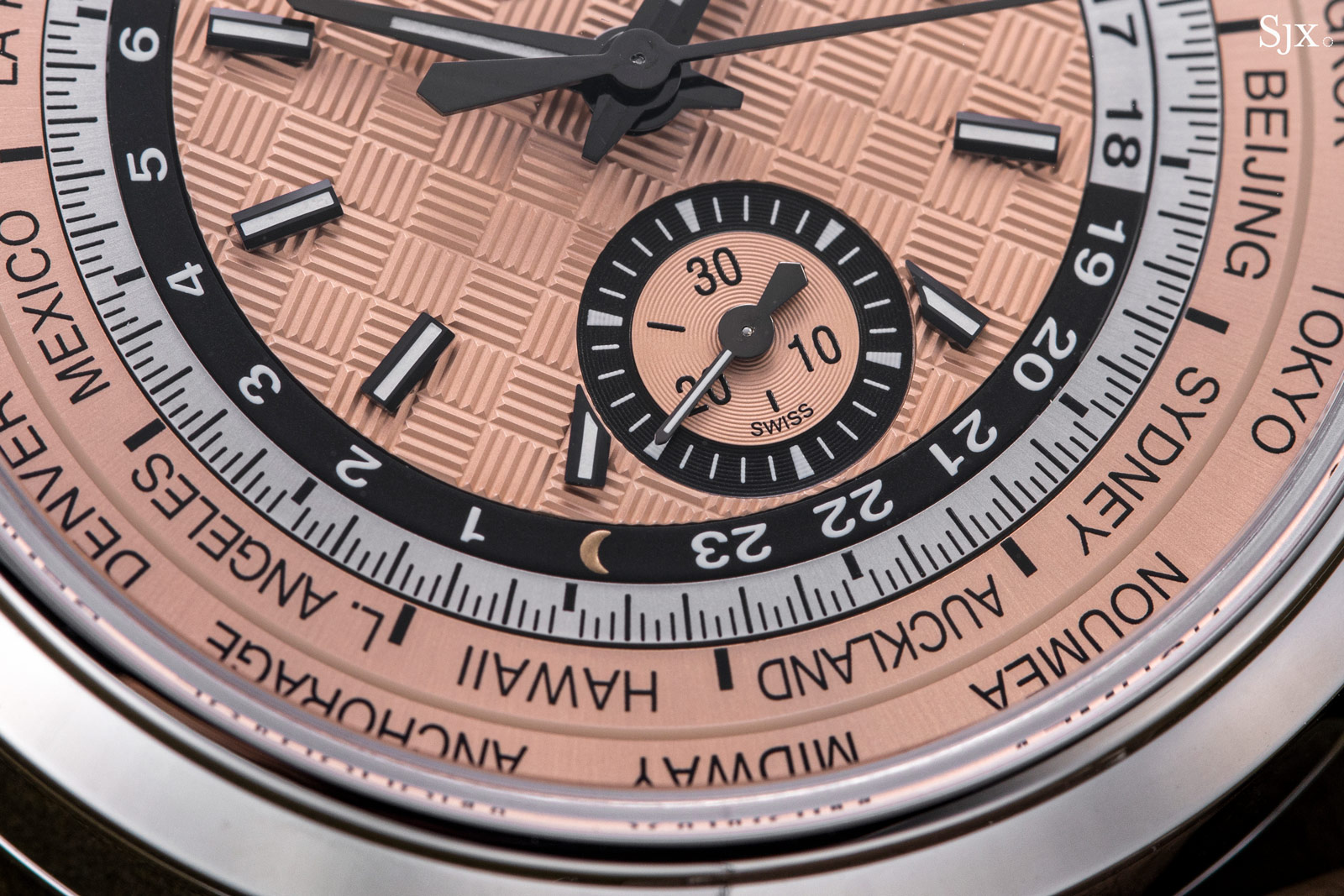 The rest of the dial is typical Patek Philippe, which is to say fairly elaborate and finely executed. The applied hour markers are solid gold but coated to give them a dark grey finish, as are the hands, while the brand name is on a plaque inserted into the dial under 12 o’clock. The ref. 5935A is a World Time Flyback Chronograph, a novel but complementary combination of complications powered by the CH 28-520 HU, which debuted in 2016 with the ref. 5930G. Though the complications are unusual, the calibre features the signature Patek Philippe mechanical elements, namely the Gyromax balance wheel and Spiromax hairspring in silicon. The Spiromax hairspring in silicon, explaining its bluish-purple colour

Comprising 343 individual parts – about double an ordinary chronograph – the movement incorporates both a column wheel and vertical clutch for the chronograph, while the world-time mechanism is an add-on module under the dial. As is the norm for Patek Philippe, it is relatively compact and slim considering its functions, measuring 34.5 mm in diameter and 7.97 mm high. In terms of decoration, the CH 28-520 HU is what you would expect in a current Patek Philippe. It is decorated cleanly and thoroughly, albeit mostly by machine with a few touches of hand finishing here and there – industrial haute horlogerie in other words.

Importantly, the decoration of the calibre has improved substantially over time, reflecting the brand’s substantial progress in aesthetic refinement. The bevelling of the bridges and countersinks, for instance, are now mirror polished and no longer has the milling marks visible on examples of the calibre from a decade ago. 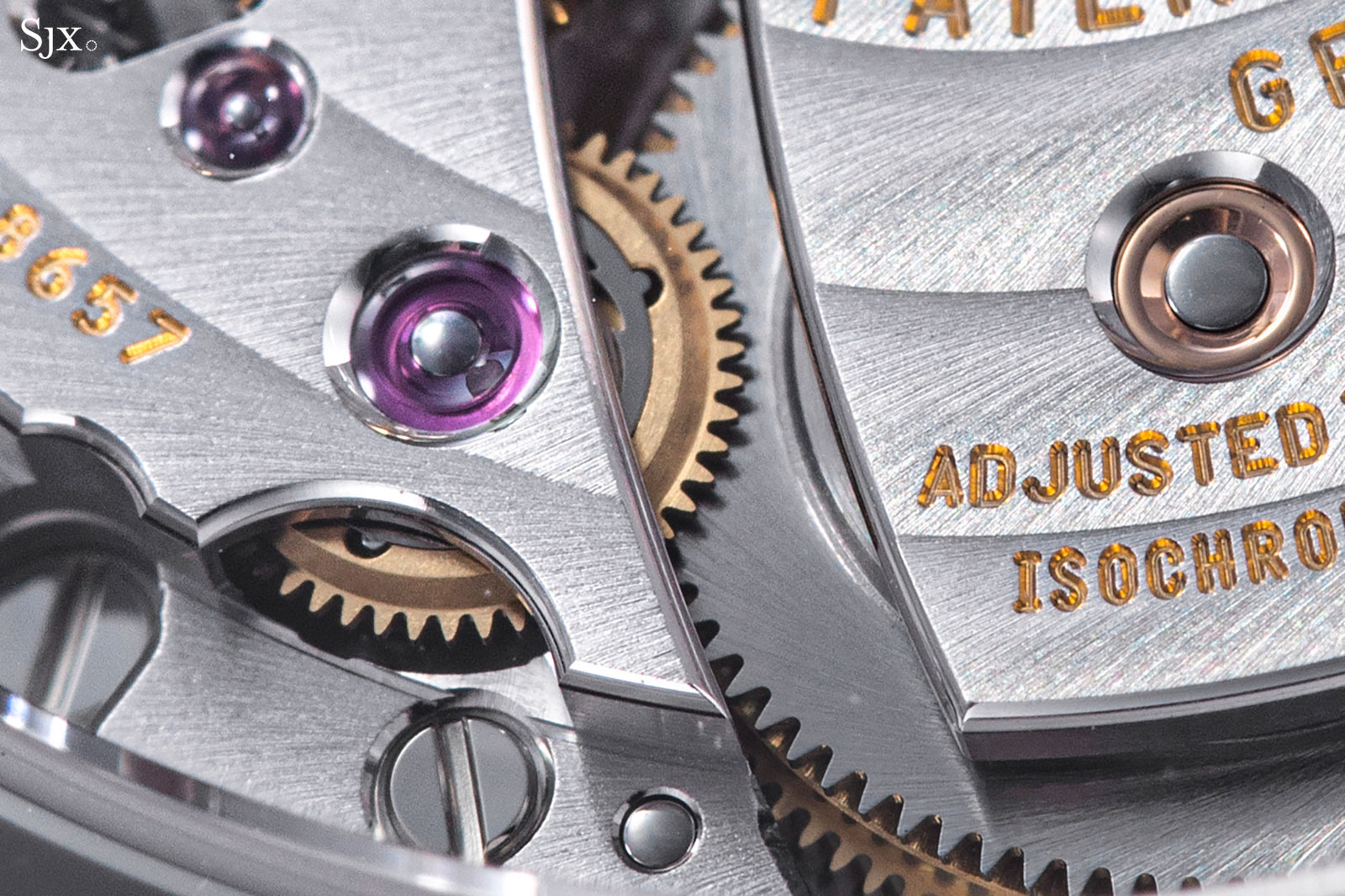 After spending some time with the ref. 5935A, it’s easy to see why this is one of the stars of the 2022 line-up. For starters, it combines a useful pair of complications in a steel case – the material alone will be a draw for some enthusiasts – and it also looks good.

The ref. 5935A is undoubtedly an expensive watch by almost any benchmark, but by Patek Philippe standards it is accessible for what it is. Admittedly availability will be nil in the near term, as is the case for any new Patek Philippe model, but it will become more attainable in the not-too-distant future, as it always does, which will make the ref. 5935A a compelling proposition. Availability: Now at Patek Philippe boutiques and retailers
Price: US$63,871 without taxes; or 84,200 Singapore dollars