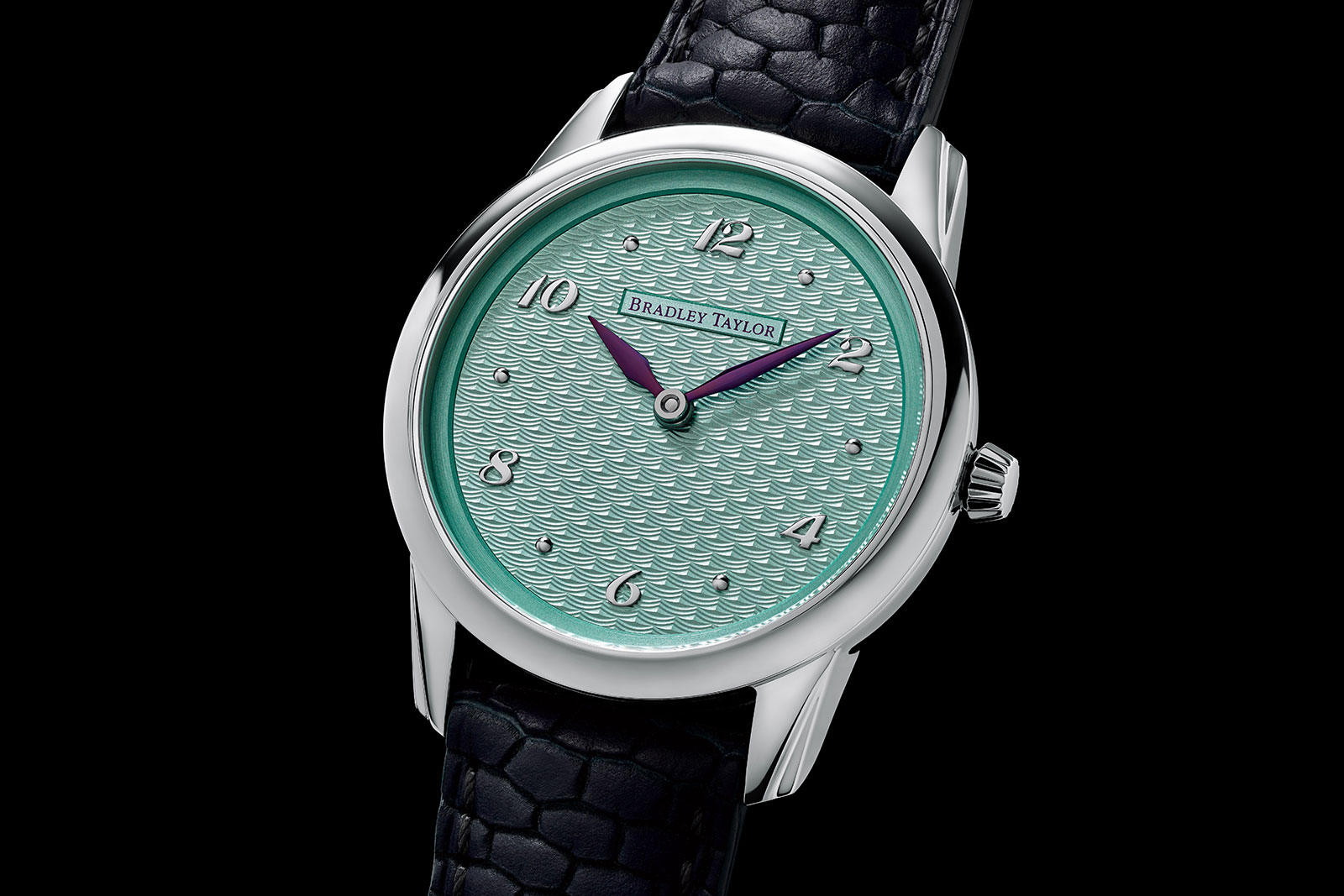 Having learnt the trade in Switzerland before stints at brands like Patek Philippe, Bradley Taylor eventually returned home to Canada and began a new career in independent watchmaking. His inaugural venture was a partnership, but last year he went solo under his own name and debuted the Paragon.

A small-run limited edition that’s already sold out, the Paragon was classically styled and Vaucher-powered, which also describe the Mr Taylor’s next watch, the Lutria. Although executed in a similar manner to its predecessor, the Lutria opts for fancier dials in striking colours – including  “salmon” and a blueish-green inspired by the ocean view from Vancouver – that are decorated with traditional guilloche. 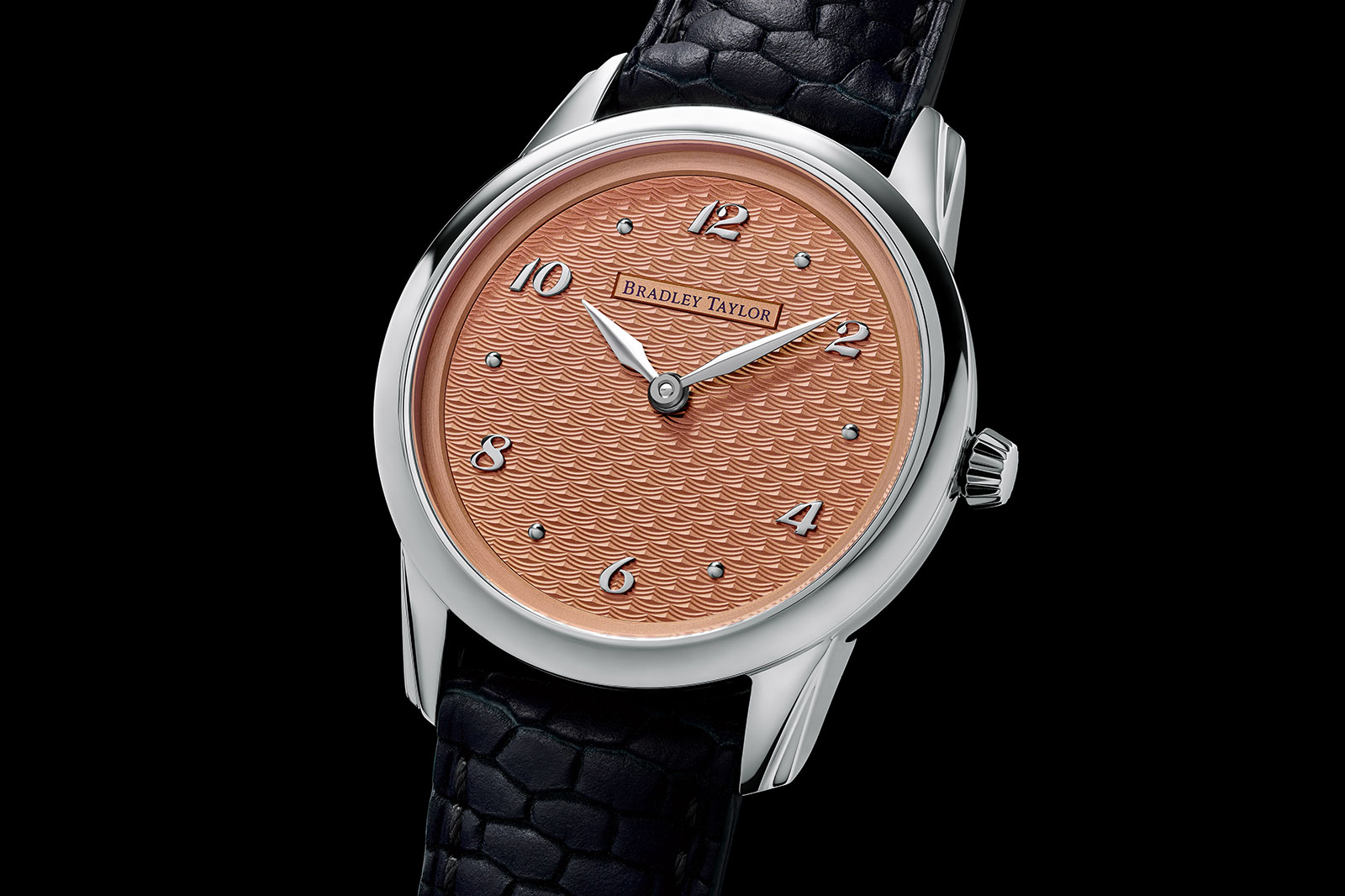 A formula that works especially well in independent watchmaking is simplicity done with finesse, which is what Mr Taylor’s work is all about. Both the Paragon and Lutria rely on top-shelf suppliers for the dial and movement, while also incorporating design characteristics unique to his brand, namely the typography that was developed by a fellow Canadian.

So if you liked the Paragon, you’ll probably feel the same about the Lutria. The two share the same case and movement, but are quite different. The Lutria is paradoxically simpler yet more elaborate: it reduces the hour markers and does away with the seconds hand but adds colour and engine turning into the mix.

The reduction in dial furniture complements the dial decoration, which is entirely in guilloche, unlike the Paragon that had only a narrow guilloche ring. And the colours are eye catching tones that suit today’s tastes that mostly lean towards smart-casual formality.

That said, the revamp of the dial leaves the hands feeling too wide and short. This is due to the fact that the hour markers sit closer to the edge of the dial than on the Paragon, with the dot markers occupying less space, leaving the dial feeling larger. 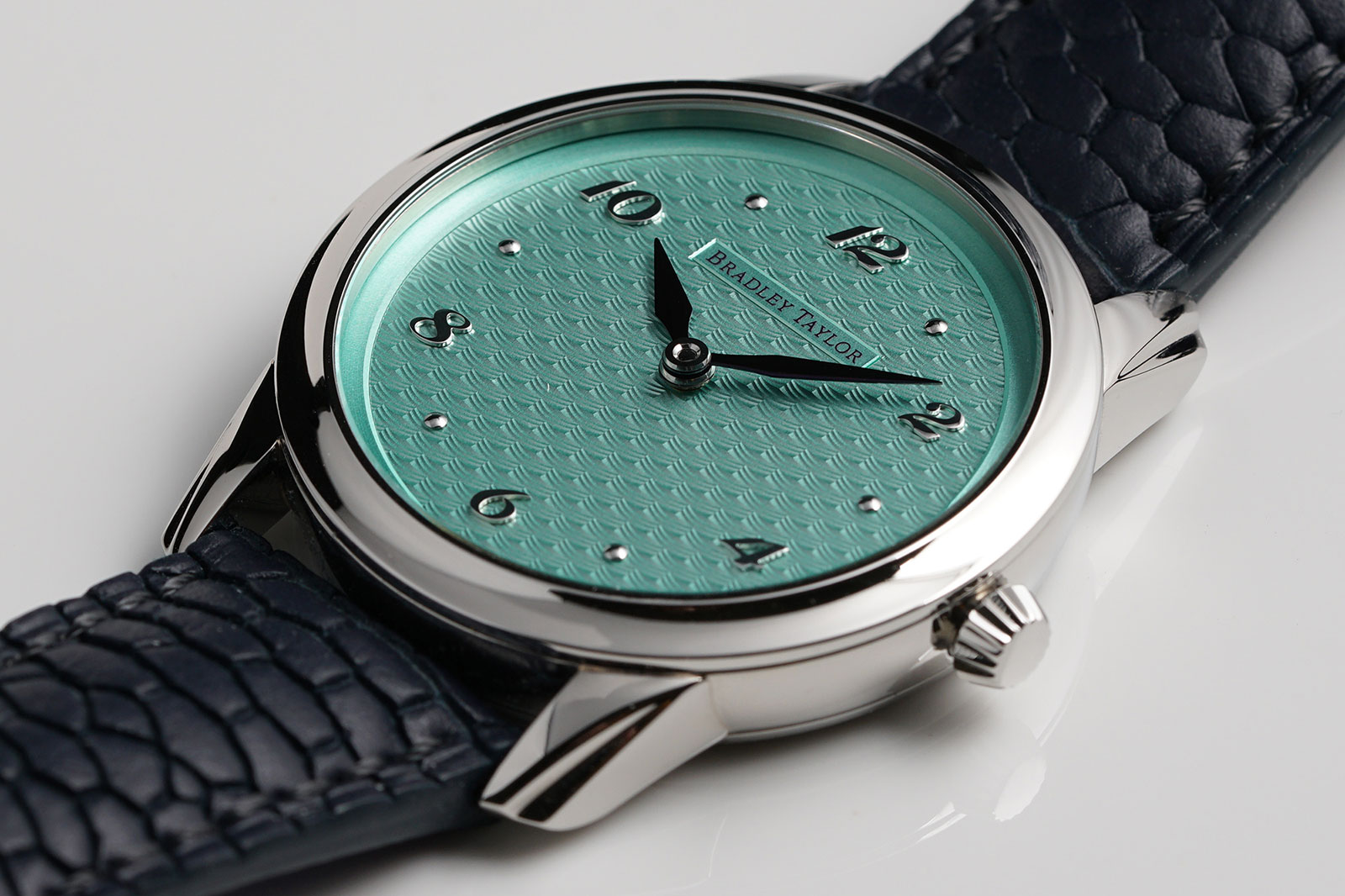 Like the Paragon, the Lutria is composed of parts made by the best Swiss specialists, like dial-maker Comblemine. Quality, however, does come at a price. The Lutria costs US$25,500, which isn’t particularly affordable for time-only wristwatch from a new, one-man brand. But considering the hand-made nature of the key components, namely the hands and dials, it isn’t exorbitant.

The only downside of the Lutria is the fact it feels like the creation of a watchmaker who is still developing his brand and style. The whole is equal to the sum of its parts – the top-notch quality of each component translates into a high-quality timepiece, but the Lutria is missing the elements that define a standout example of independent watchmaking.

Mr Taylor, however, is working on something more mechanically compelling – it’s still a few years away though – which should take his brand in the right direction. 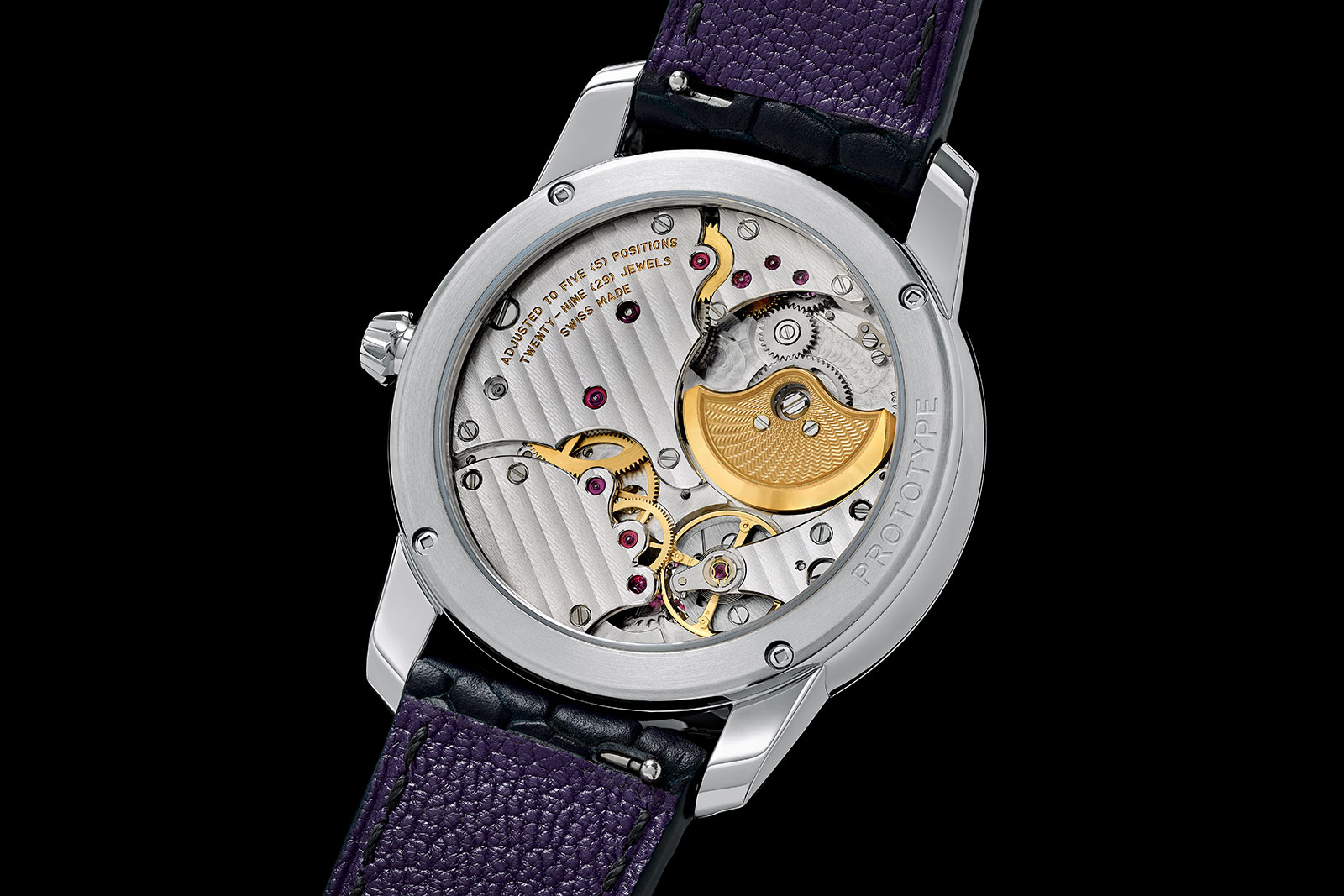 Inspired by the sea

Of the two iterations on offer, the iridescent sea green is certainly the highlight. While both “salmon” and green are today’s hot colours, the sea green used on the Lutria is unique with its changing tone that goes from light to dark green depending on the light. The shimmering finish is a result of a chemical vapour deposition (CVD) process that is also done in Switzerland. 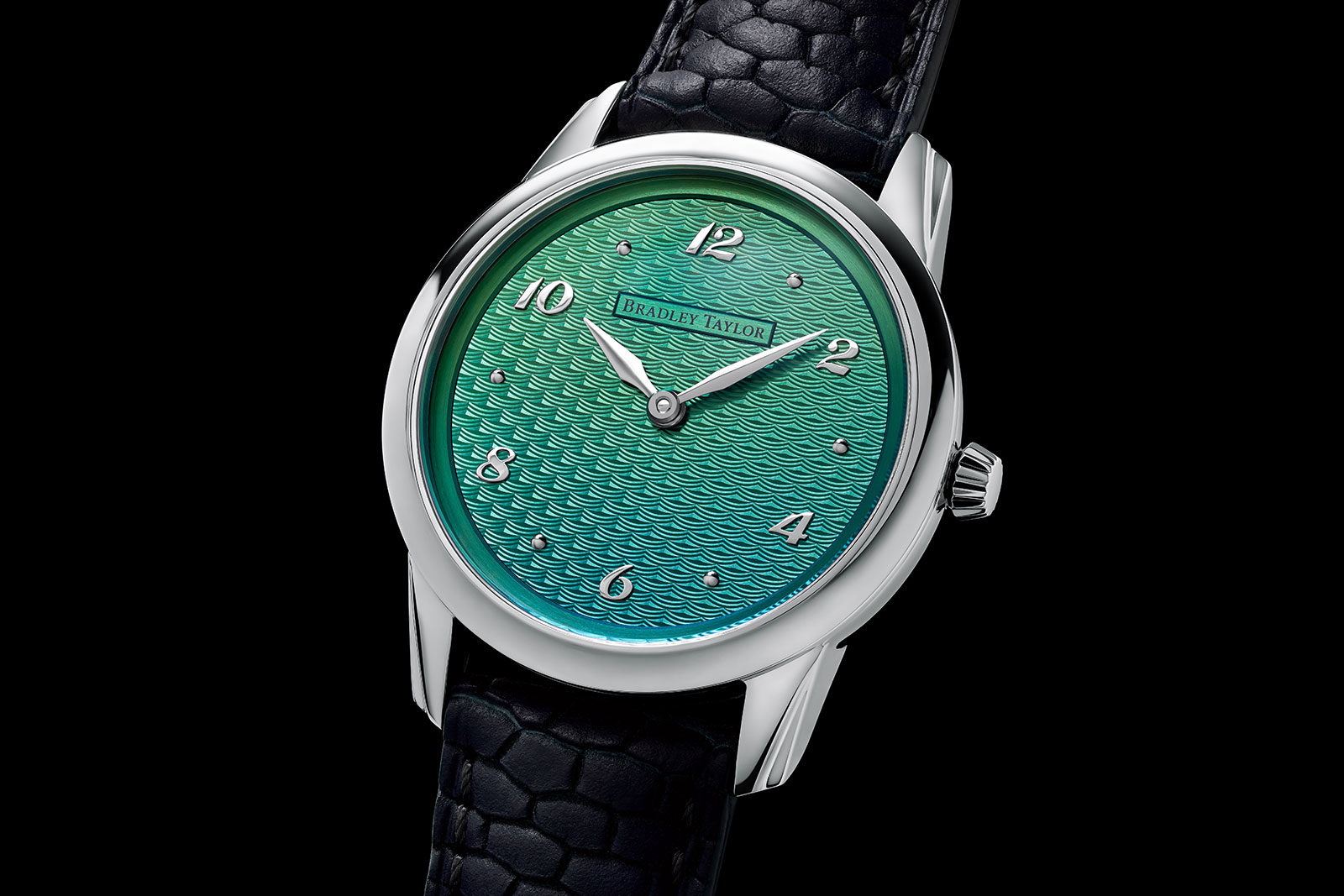 And the sea green is a perfect fit for the guilloche, which is a traditional barleycorn motif that’s been tweaked to evoke waves on the ocean and done the traditional way on a hand-operated rose engine.

Like many other independent watchmakers, Mr Taylor turned to Comblémine, the dial maker owned by Voutilainen that has since evolved into a full-service provider for niche brands. The choice of Comblémine is self-explanatory up close: the guilloche is precisely engraved and exhibit great clarity in its lines and shapes. 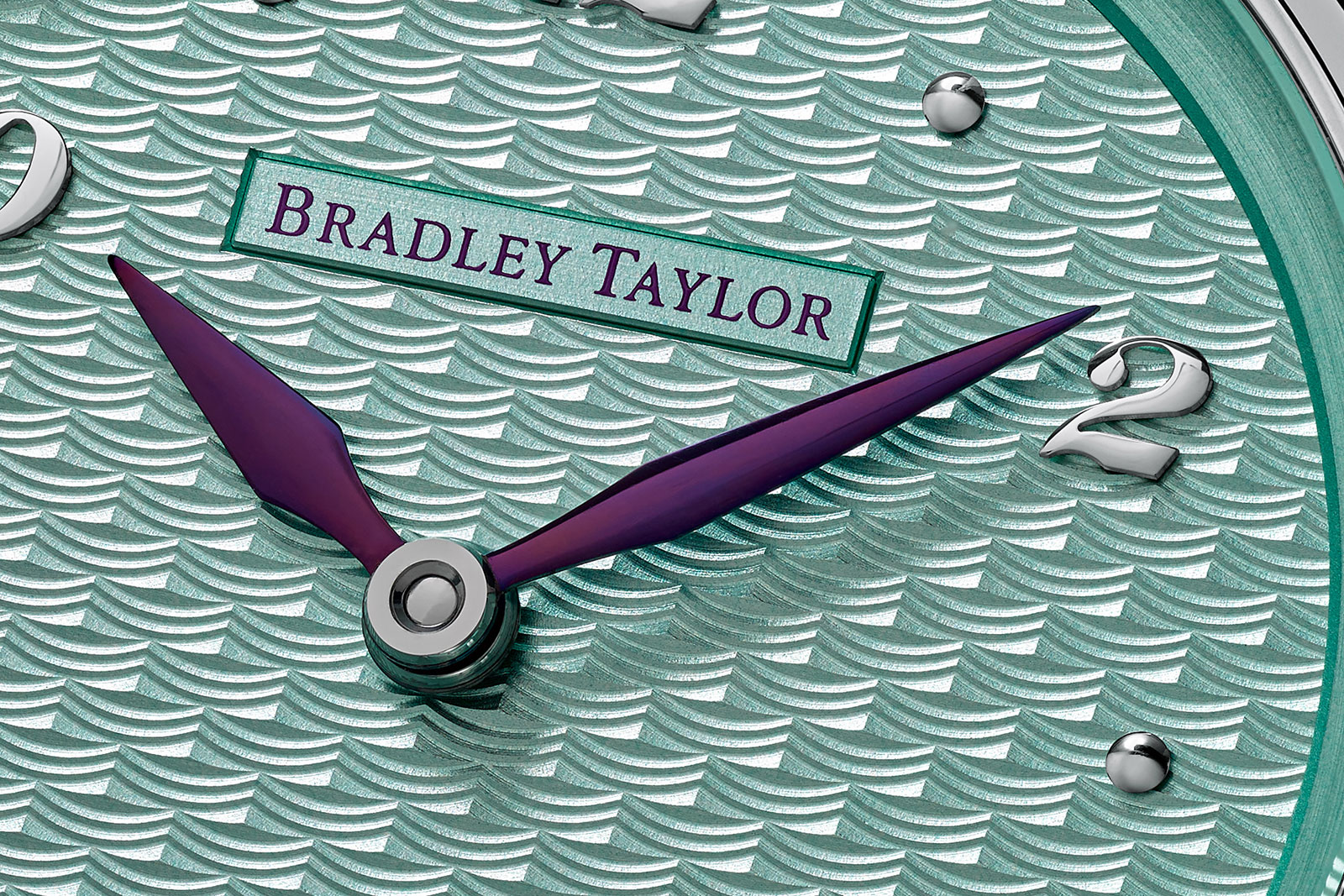 The hands and markers were slightly tweaked compared to those found on the Paragon. Gone is the numerals for the odd-number hours, which have been replaced by domed pins, giving the dial a cleaner look. Both the applied numeral and pin markers are polished by hand, giving them a gently rounded top surface.

Similarly, the hands have been simplified – and the seconds removed entirely – perhaps to prevent them from distracting from the guilloche. But as with the Paragon, the hands are hand made, with each hand requiring 12 to 20 hours to mill, and then file and polish by hand. Notably, each hand is actually made up of two parts, the hand itself as well as a central, black-polished boss. The hand segment is heat treated to a purple finish before being secured to the boss.

A high-quality, time-only wristwatch made in Canada.