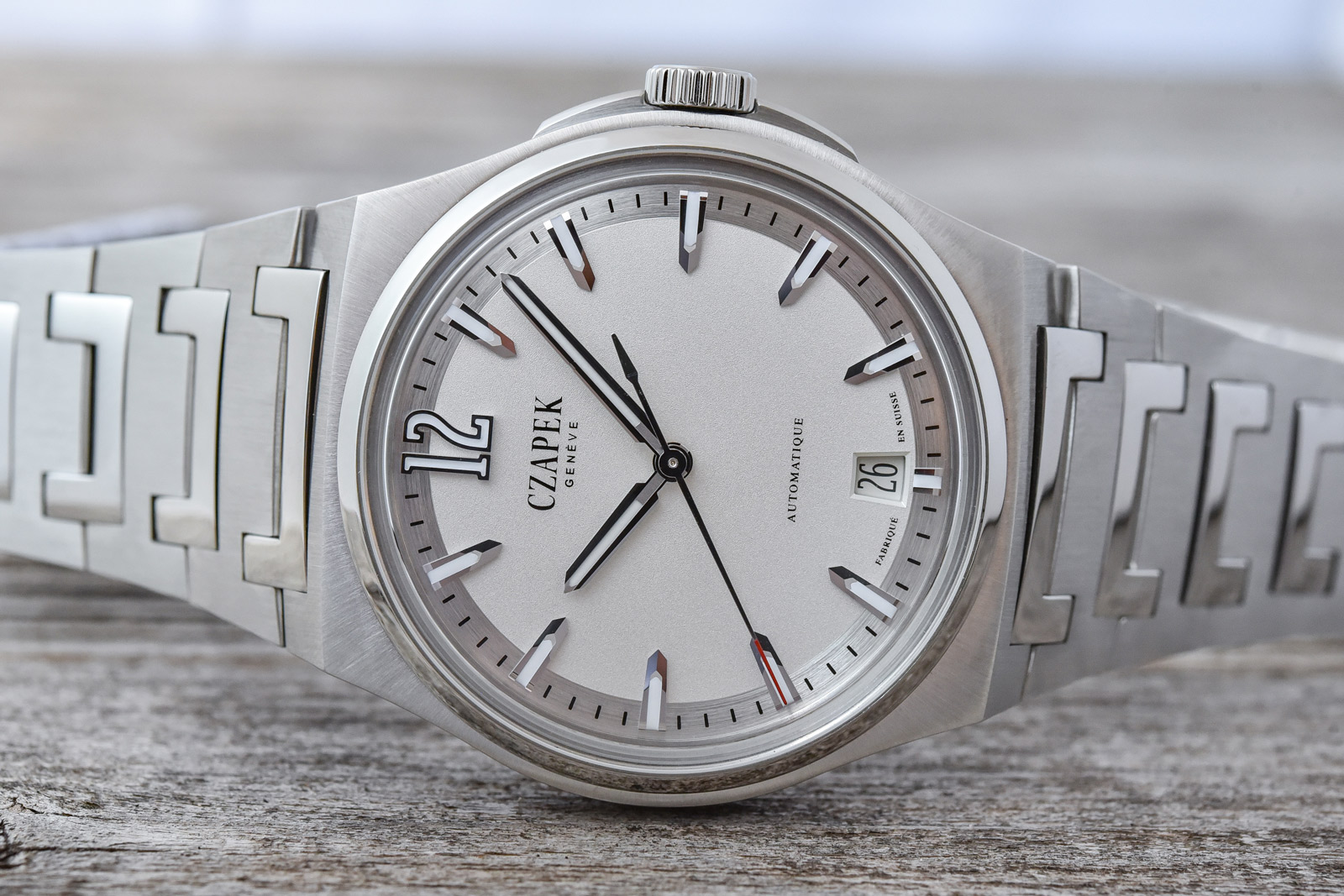 Revived six years ago via crowdfunding, Czapek’s original claim to fame was being the original business partner of Patek before he joined with Philippe. The brand has since gained traction thanks to its proprietary movements and more recently, a sports watch with an integrated bracelet.

Now the sports watch is the basis of a collaboration between Czapek and Dutch watch magazine Monochrome. Featuring a muted, all-white livery, the Antarctique “Monochrome White” has a grained dial in pearl white. 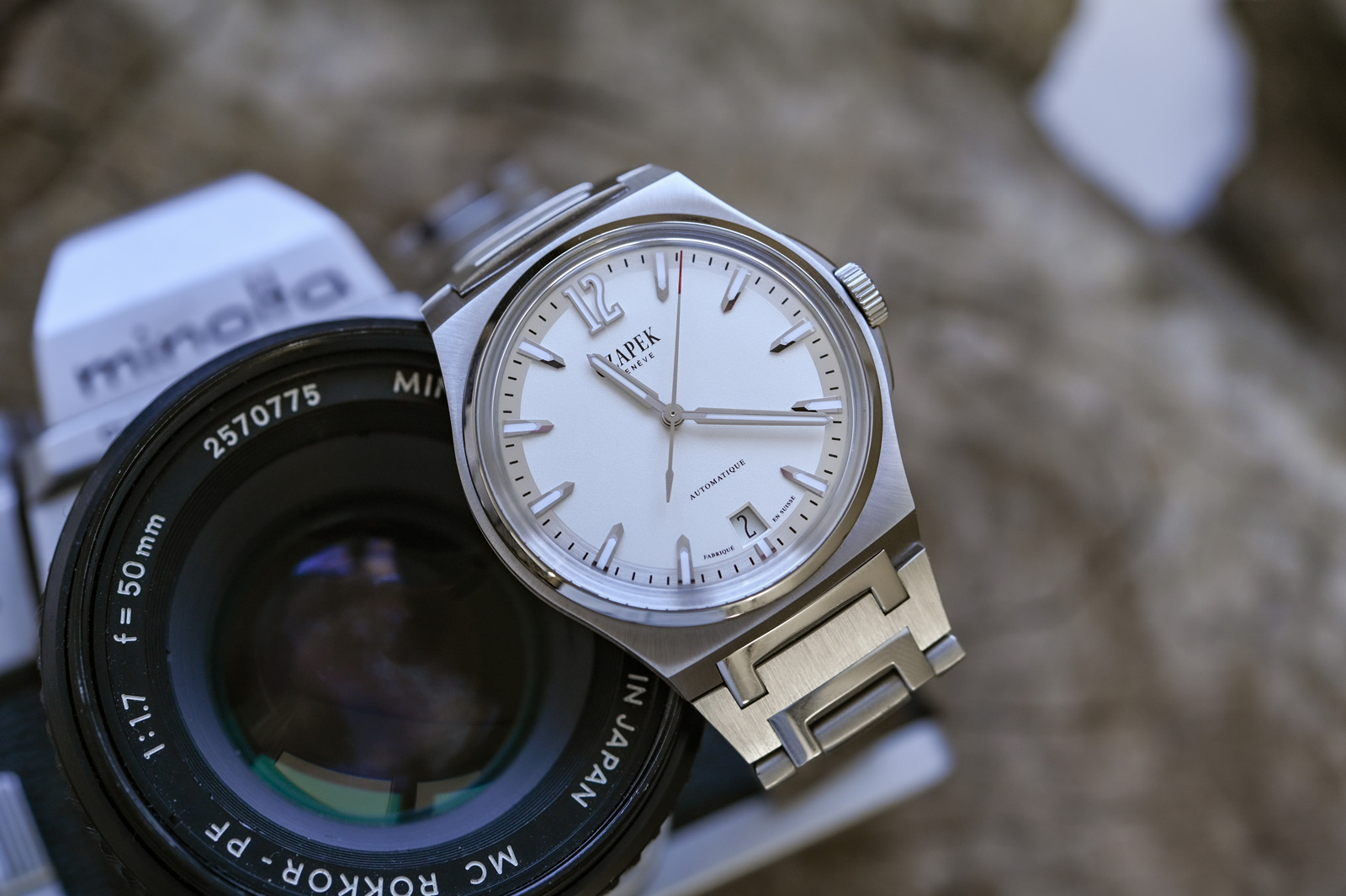 While the Antarctique is a new entry into the integrated-bracelet sports watch segment, the design sticks to a familiar formula because there are only so many ways a sports watch with an integrated bracelet can be accomplished.

The Monochrome edition sets itself apart with its white dial – a good look that’s unusual for a sports watch, a category where blue, grey, and green dials dominate. It’s a refreshing look that’s also practical, as light-coloured dial makes for good legibility.

The case and bracelet of the Antarctique are also finished neatly with contrasting surfaces, but where the watch shines is the movement. Developed in-house with the help of specialists, it’s a micro-rotor automatic with a modern style but unusual details that evoke vintage pocket watch movements. Few competitors in this category and price range have movements that are similarly elaborate in construction and finish. 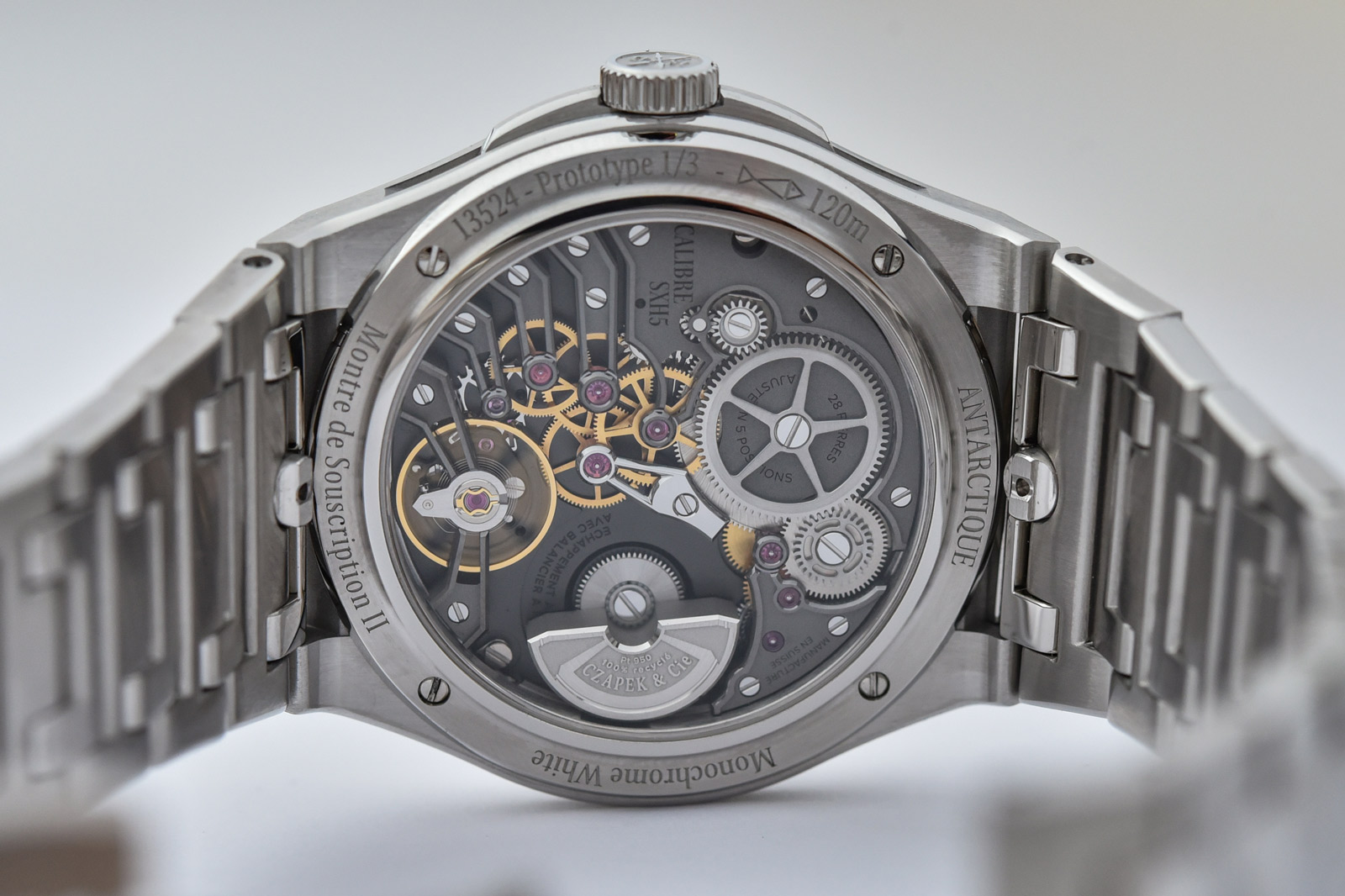 The individual “finger” bridges for the gear train are old school, but the aesthetic is clearly modern with the monochromatic finish and angular bridges

Priced at the equivalent of US$19,300, the Monochrome White is pricey but sits in a similar price bracket as the competition. And the competition is diverse and tough, ranging from the established names like the Royal Oak and Overseas, as well as independent watchmakers like Moser with its Streamliner.

That said, the Monochrome edition costs the same as the regular-production Antarctique, despite being a limited edition of 33, which makes it a compelling alternative to the standard version.

The dial of the “Monochrome White” retains the design and textures of the standard model, which means a two-tone finish and a date at six.

While the dial and the applied markers are similar in colour, their differing texture easily distinguishes the two. Legibility is further improved by the polished facets of the hour markers, which reflect black at certain angles, allowing them to stand out.

But the detail that stands out the most is the only bit of colour on the dial: the red tip of the seconds hand, a striking accent but one that arguably interrupts the monochrome look (no pun intended).

And the case is also identical to that of the standard model. It’s 40.5 mm wide but an elegant 10.6 mm high.

The bracelet, however, has been upgraded over the standard version, though the design remains the same. It’s equipped with an “on-the-fly” adjustment mechanism incorporated into the last link by the clasp, where a spring-loaded mechanism allows the link to elastically expand with the wrist. 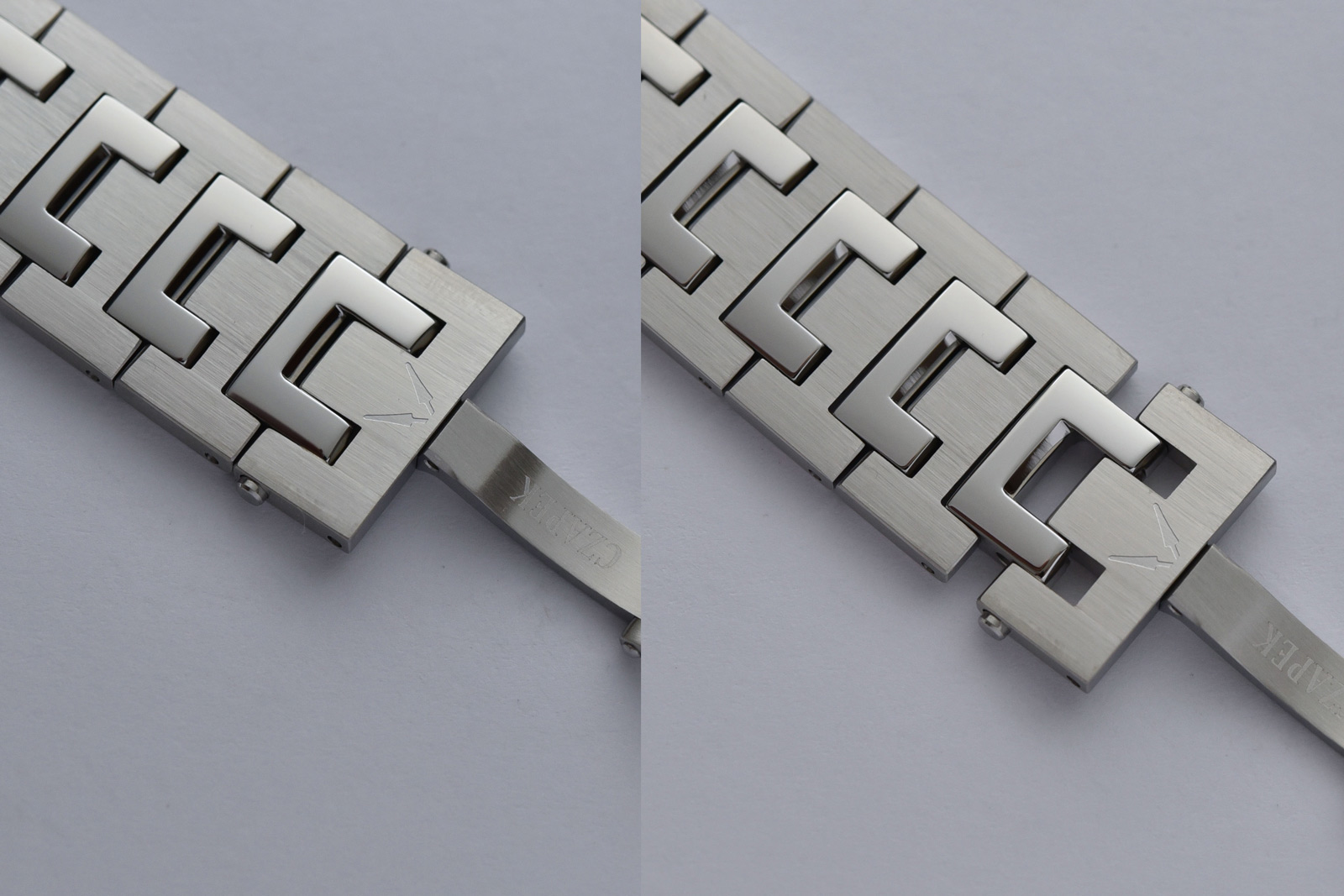 The SXH5 movement is certainly the star, not just because of the interesting construction but also the detailed and varied decoration.

A particularly attractive element is the central bridge that’s black-polished on its top and bordered by wide, rounded bevels – and the bevelling even includes four sharp, interior angles, an uncommon extra in watches of this price. 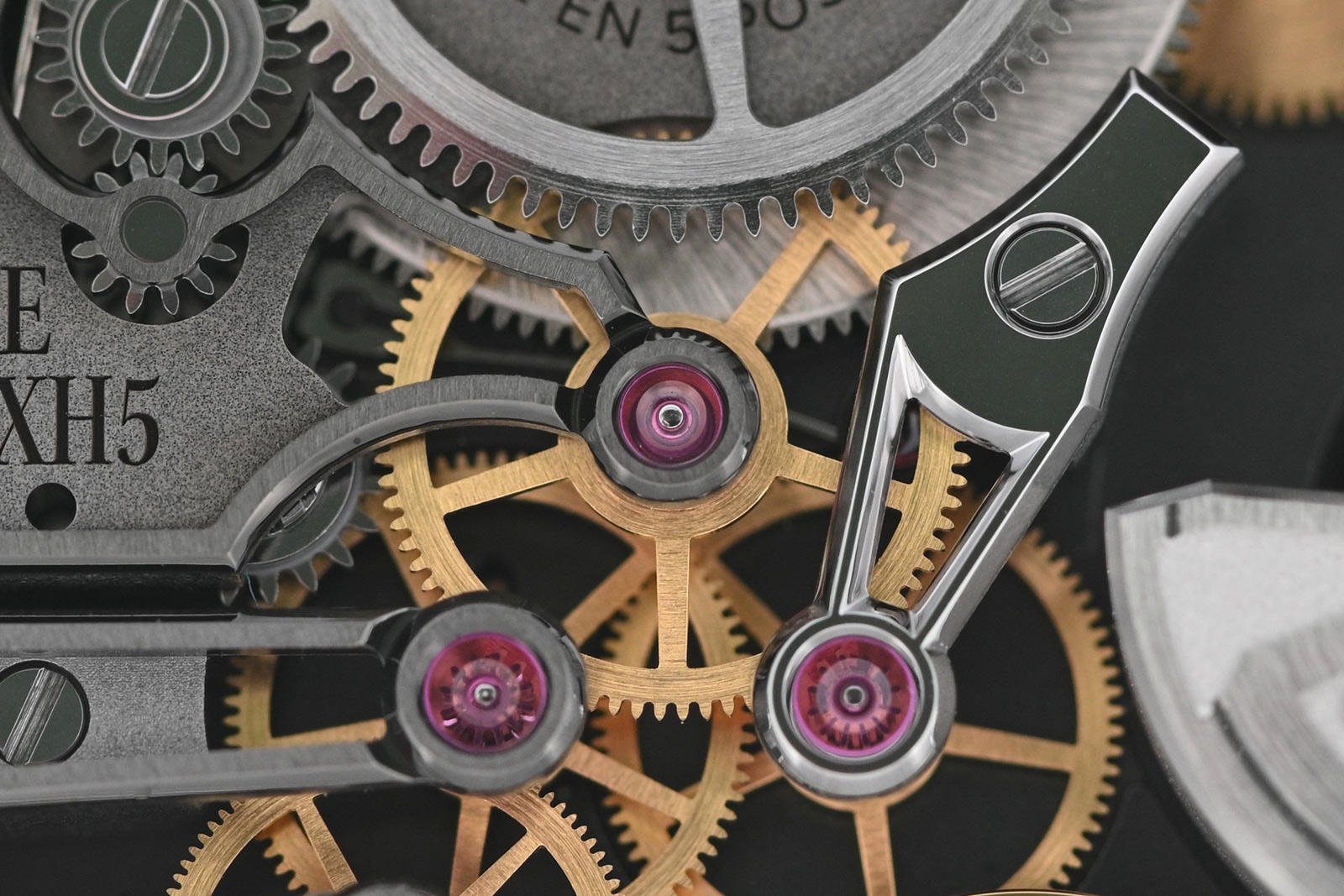