Sotheby’s is kicking off the spring season of the year’s watch auctions with two consecutive sales in Hong Kong that take place in a week’s time. The first is an evening sale of a single-owner collection of exceptional vintage Patek Philippe watches. And it will be followed by Important Watches I, which includes several good examples of independent watchmaking.

Though the single-owner sale has most of the significant vintage Patek Philippe watches offered by Sotheby’s, it doesn’t encompass all of them. One of the major lots is a Patek Philippe ref. 2524 minute repeating wristwatch. We take a look at that along with several other highlights from Important Watches I, both vintage and modern, including an arguably underrated complicated (and bejewelled) watch for men by Van Cleef & Arpels (VC&A).

Important Watches I starts at 2:00 pm (GMT +8) on April 26, 2022. Registration for bidding and the full catalogue can be accessed here. The most desirable Rolex Daytonas are typically steel, with the two-tone versions often being the most affordable, perhaps because the two-tone look is generally less sought after regardless of brand.

But this steel-and-gold ref. 16523 is notable enough that it was included in Daytona Perpetual, the reference tome covering many rare and unusual variants of the model published by Italian Rolex specialist Pucci Papaleo. The key features of this Daytona lie with the dial, as is often the case with vintage Rolex. It’s a “porcelain” dial, named after the translucent, white lacquer finish that resembles porcelain and was only used by Rolex for a brief period.

But more importantly, has “COSMOGRAPH” located far below the main body of text under 12 o’clock, hence the “floating” moniker. And to top it all off, the dial is signed by American jeweller Tiffany & Co. 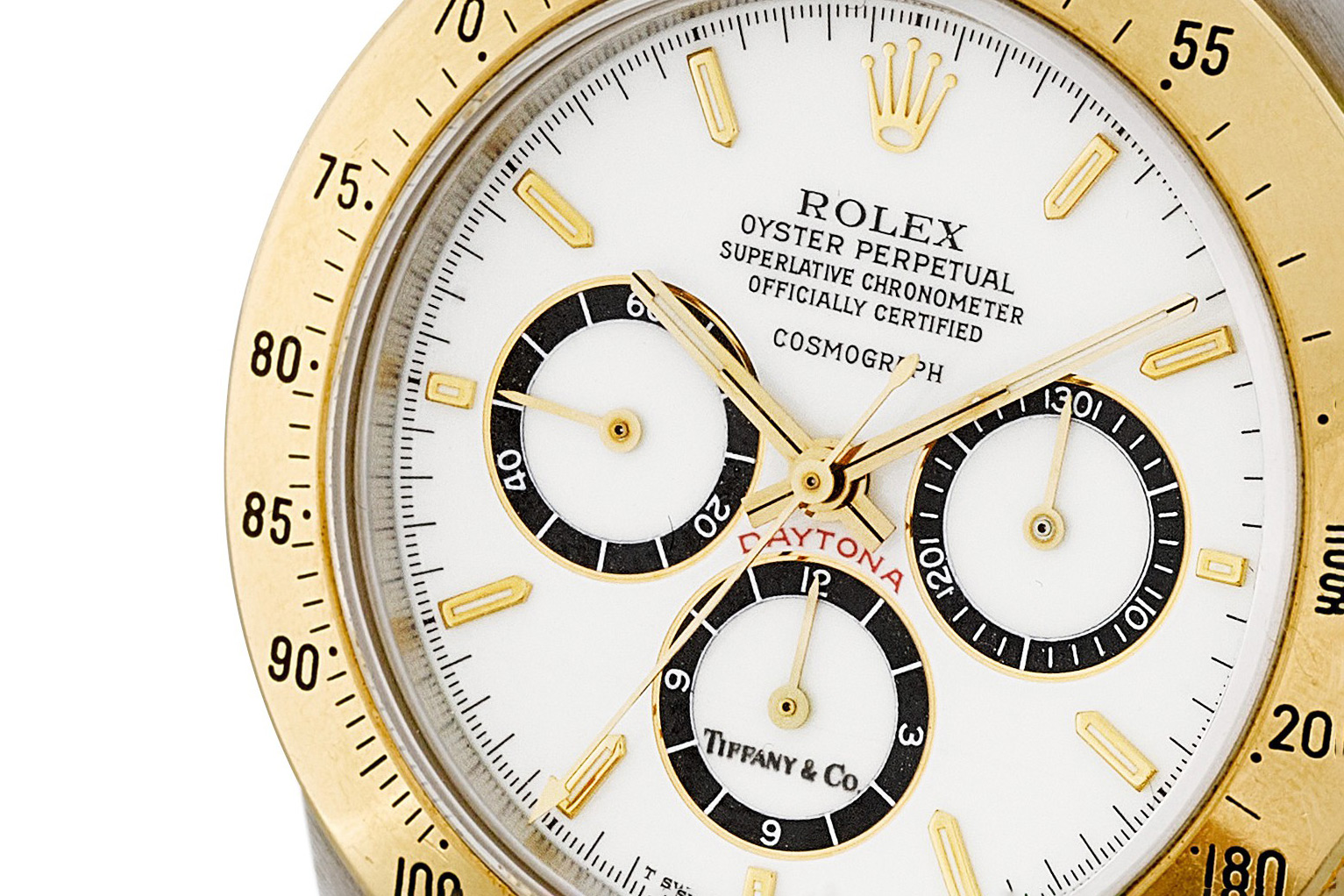 The rare and desirable features on the dial result in an extremely desirable watch. Proof of its significance is the fact that a similar example was sold for around US$133,000 at Christie’s in 2020.

And that is despite the two-tone case and bracelet, which actually brings with it the upside of accessibility, relatively speaking; this will certainly be more affordable than a comparable Daytona in steel. All Nautilus models are currently all the rage, so it becomes the most minor of differences that separate the hot from the ultra-hot. One of the hottest sub-genres within the Nautilus category is the double-signed watch.

While historically Patek Philippe put the names of a variety of retailers on the dial, only Tiffany & Co. has that privilege in the modern day. Such double-signed watches can only be acquired via Tiffany & Co.’s stores, mainly in the United States, resulting in a rarity factor that can result in a multi-fold increase in price. 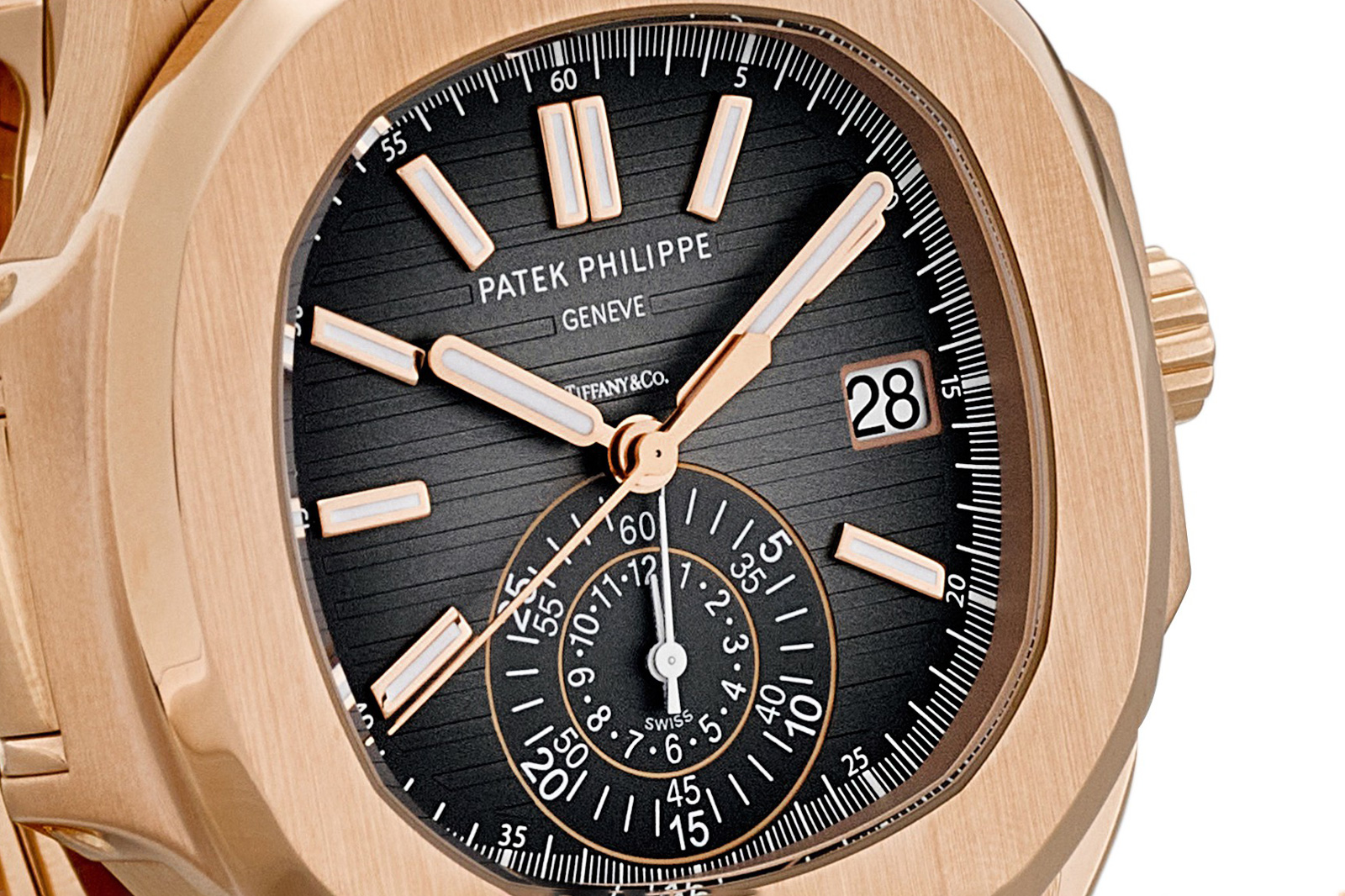 Introduced in 2013, the Nautilus chronograph ref. 5980/1R has been in production for less than a decade. Given its relatively modest annual production, it’s is likely that only a handful of them carry “Tiffany & Co.” 0n the dial. 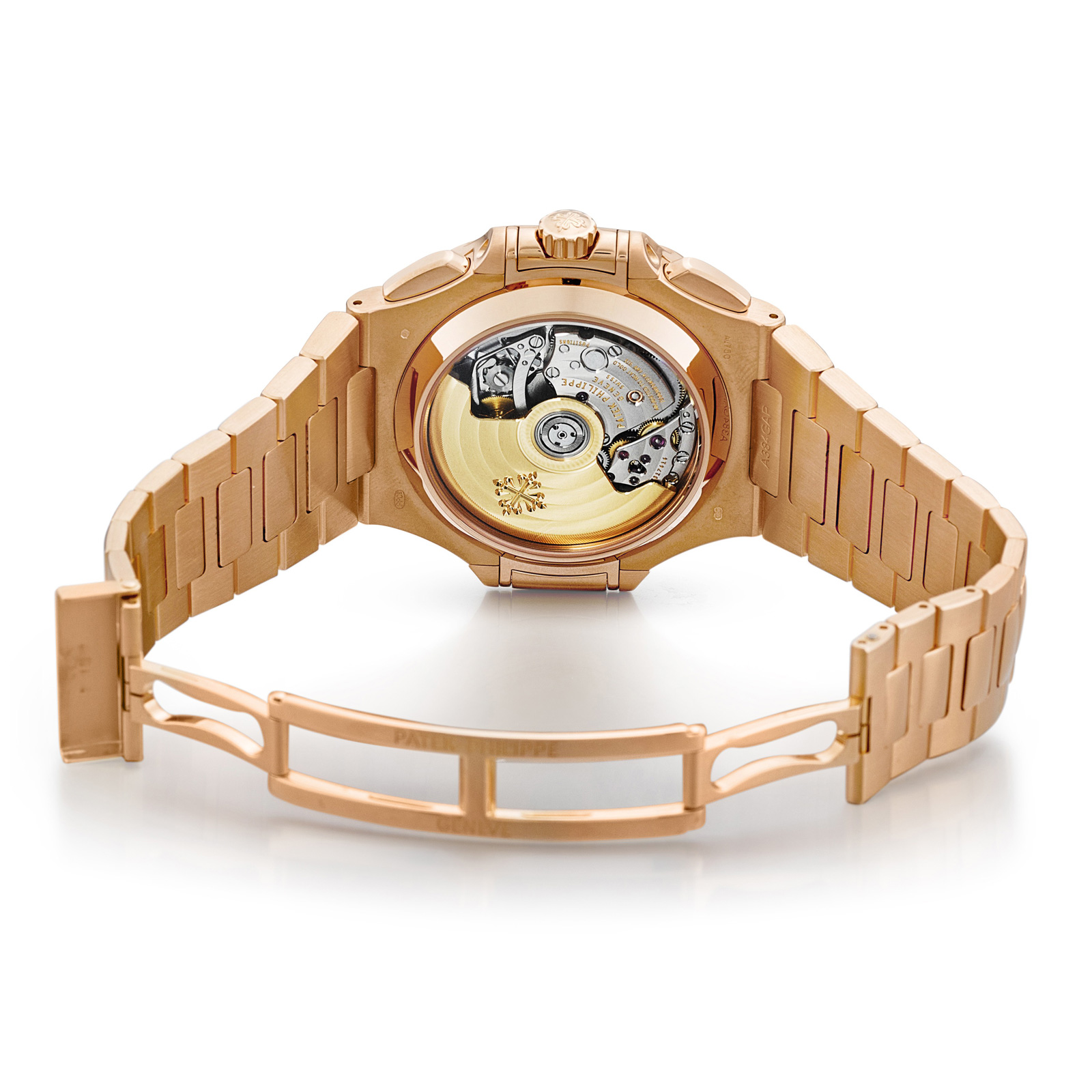 Hype notwithstanding, the Nautilus chronograph is a stunning watch, especially in rose gold. Bold and elegant, it looks and feels like a luxury-sports watch. But today the ref. 5980/1R is more than just a pretty watch, it’s the perfect status symbol.

One of the hidden gems of the sale is the VC&A Midnight Poetic Wish, a sublime, whimsical watch that combines quirky, appealing aesthetics, artisanal decoration, and intriguing mechanics. It is a five-minute repeater with an automaton that only comes alive when the repeater is chiming. The automaton is made up of the figure of a gentleman walking across the roof of Notre Dame Cathedral and stopping to indicate the hours, along with a shooting star travelling across the Parisian night sky and pointing to the minutes.

The Poetic Wish is actually one half of a pair: the ladies’ Poetic Wish sports a similar complication, but with a female figure walking across a floor of the Eiffel Tower and gazing at Notre Dame, forming the other half of the romantic tale.

Like many of VC&A signature complications, both Poetic Wish watches were developed by Agenhor, the Geneva-based complications specialist best known for the chronograph movement used by Singer and Moser. 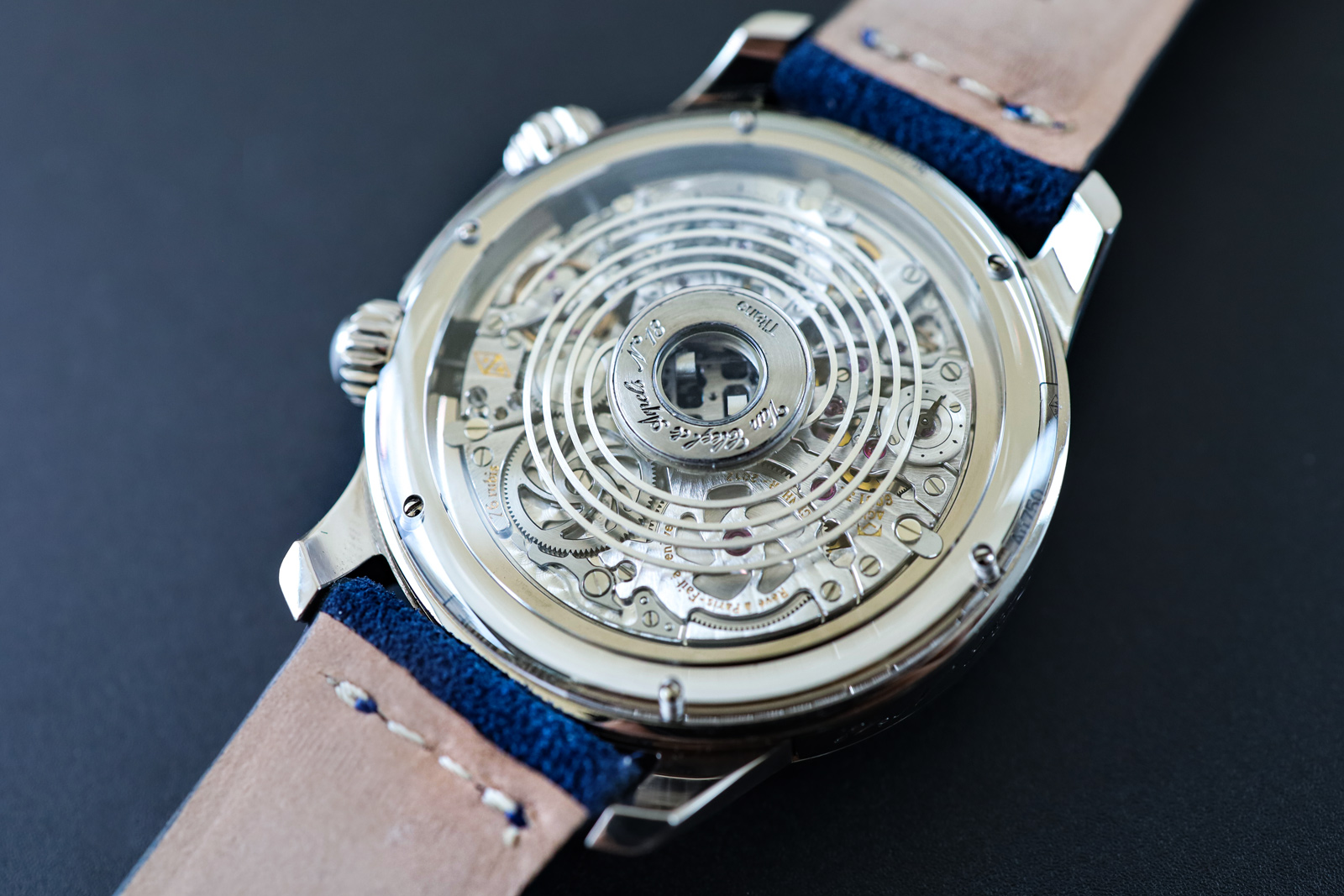 The movement is more than just a clever automaton. It is unorthodox for a minute repeater: the gongs are elevated, sitting over the movement and close to the sapphire case back, resulting in the spiral visible on the back. And the hammers are mounted in the centre and vertical to the plane of the movement, striking the gongs outwards.

The striking mechanism is supplemented by a constant-force mechanism that ensures the operation of the automaton doesn’t affect timekeeping.

And the movement also features a conventional time display on the back via a small sub-dial. That’s necessary as the time can only be read on the front when the repeater is activated and the automaton is running. The dial of the watch is elaborate and delicate in its execution. Decorated with relief engraving as well as miniature painting, the dial also features mother of pearl inlay that forms the clouds. And with VC&A being a jeweller first and watchmaker second, the bezel and the lugs are ornamented with baguette diamonds.

With an estimate HK$1.2-2 m, or about US$153,000-255,000, the Midnight Poetic Wish is not exactly affordable, but it’s good value on two levels. For one, it truly unique and impressive. And the original retail price was more than twice as much as the low estimate, making it something of a bargain by that benchmark. Full lot details here.

Like the Patek Philippe ref. 5980/1R above, this Rolex ref. 2508 is a chronograph from a preeminent Geneva brand and bears a retailer signature, but it’s the polar opposite in style and history.

Made in the 1930s, the ref. 2508 arrived decades before the Daytona, so it has neither an Oyster case nor bracelet. But it is still a sports watch by the standards of the period: the case is oversized, 38 mm in diameter and stainless steel. And matched with a black dial, the ref. 2508 is very much a desirable sports chronograph of the early 20th century. 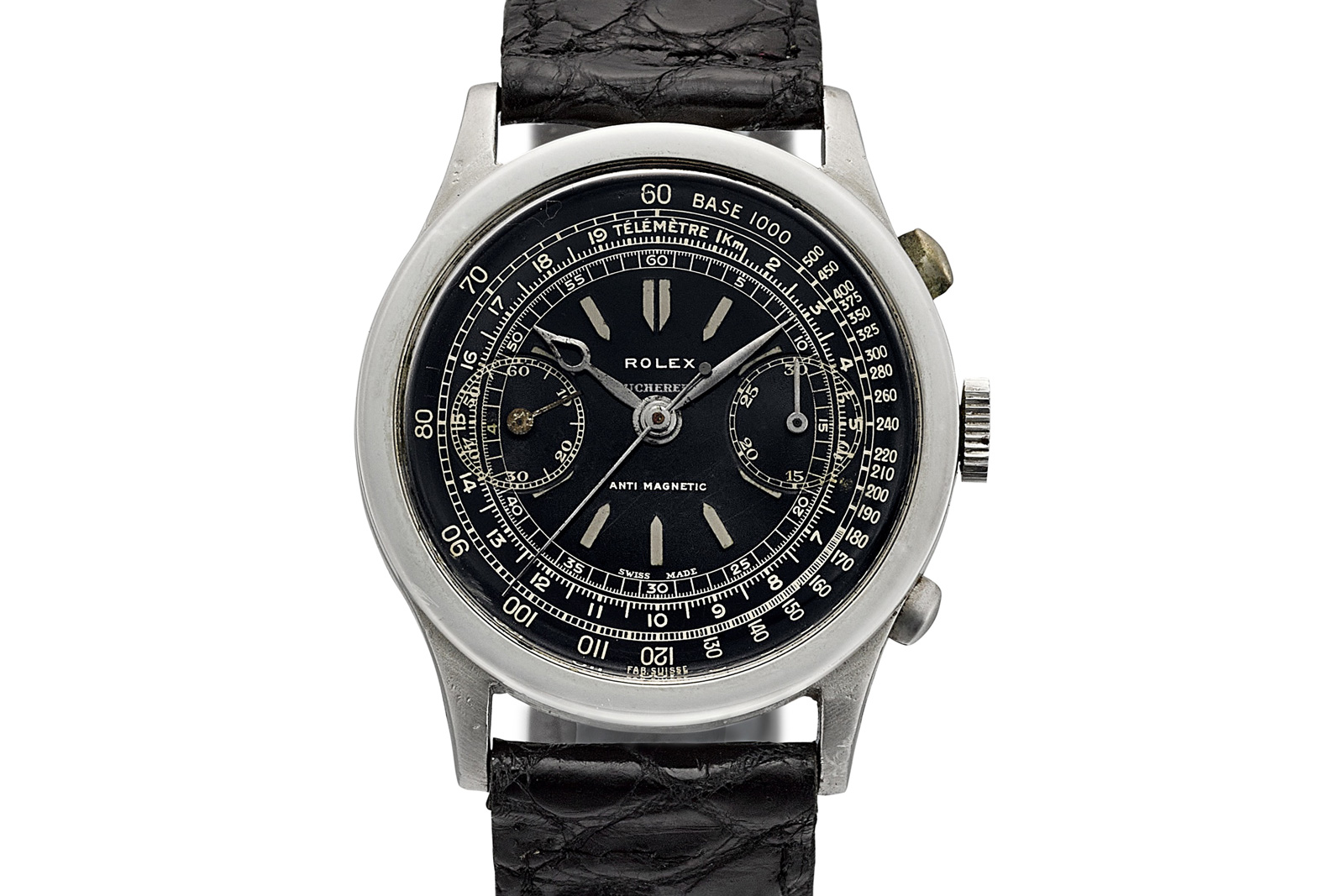 The dial is especially attractive with its twin scales for tachymeter and telemeter. While several dial variations exist for this model, this example is uncommon and also one of the most appealing.

The dial is complex but clean with all scales harmoniously arranged, with the hour markers being simple batons instead of the mix of batons and numerals found on other dial styles. The dial variant is rare in itself, but made even more desirable with “BUCHERER” just below the brand name under 12 o’clock. 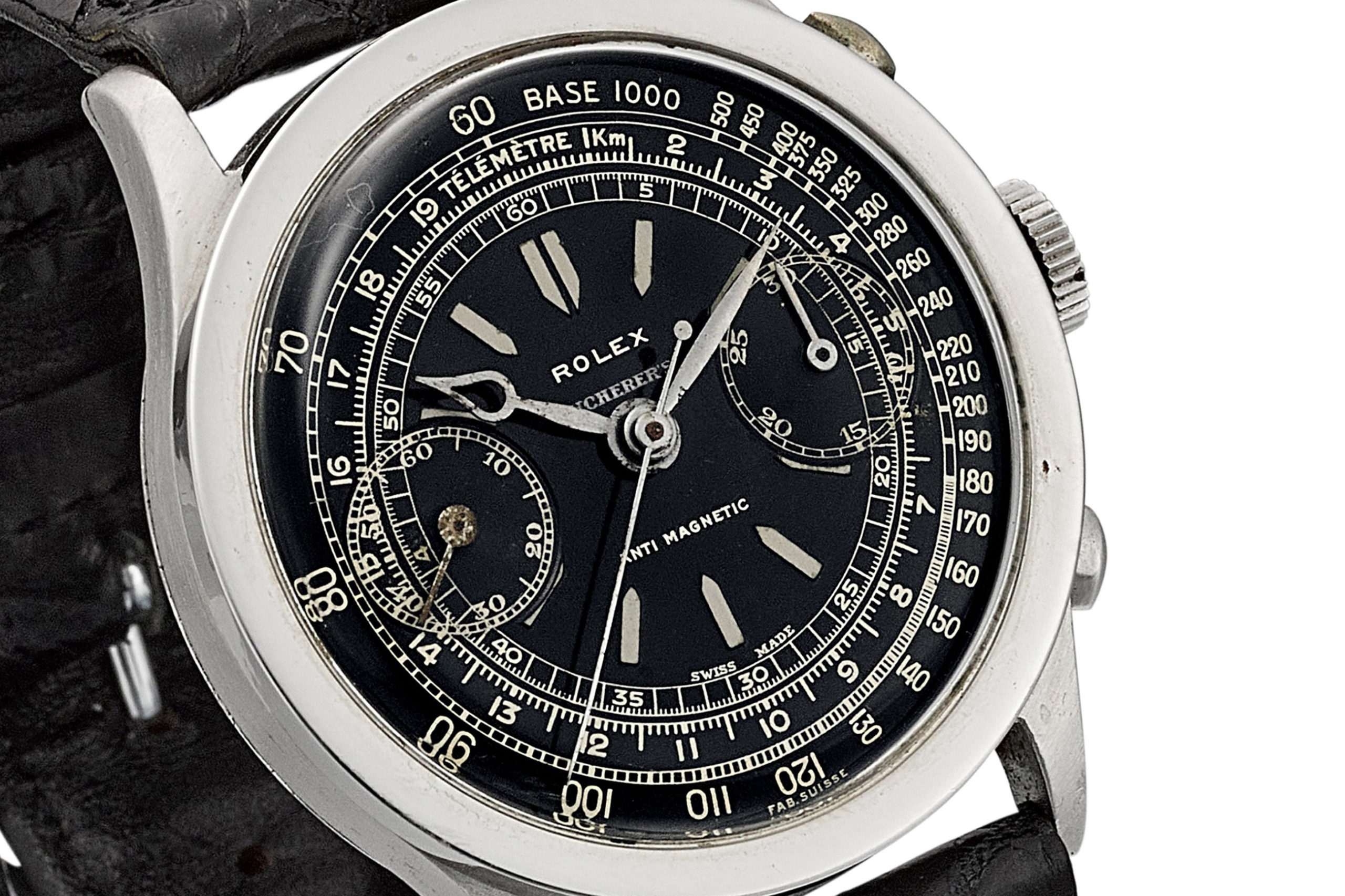 The present example was produced relatively early in the model’s production run as indicated by the 38 mm case, as the later versions were a smaller 35 mm. This makes it a good size even by today’s standards.

Another detail sets the case apart: the pushers are oval instead of rectangular, also a rare detail for this reference.

While diminutive in size – the case is just 33 mm – the Patek Philippe ref. 2524 is one of the most historically significant watches in the auction. The ref. 2524 was the first serially produced minute repeater wristwatch by Patek Philippe, with the total number produced estimated to be fewer than 12 examples.

The ref. 2524 differs from its successors, namely the ref. 2524/1 and ref. 2524/2, in its “fancy” lugs. Elaborately sculpted, the lugs are far more decorative than the straight lugs found on later models. And for a brand not known for “fancy” lugs, this is especially striking. But what sets the present example apart from other dozen produced is the dial, which is possibly unique. While the typical ref. 2524 has a dial with baton indices for the hours, the present example is two-tone with Roman numerals for the quarters and batons in between. Inside the case is a tiny movement that was probably produced for a ladies’ pendant watch but then repurposed for a wristwatch. Going by its layout, the ebauche was likely by Geneva movement maker Fritz Piguet, though the barrel bridge is slightly different from another example of the same ebauche found in another Patek Philippe.

The movement is classically attractive, evoking a bygone era of watchmaking that contrasts with modern Patek Philippe movements that lack the charming, graceful bridges and artisanal hand finishing. 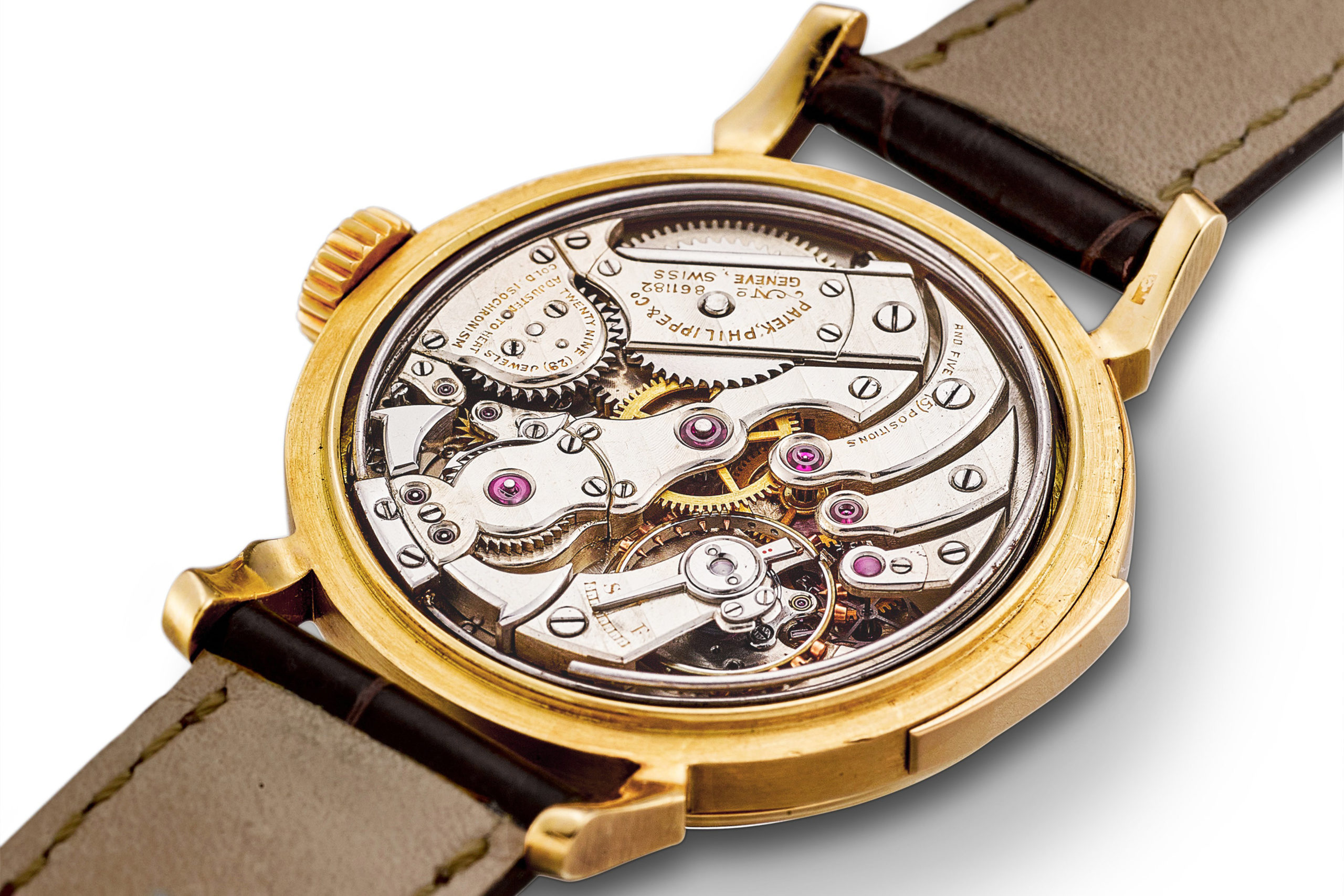 And finally a little mystery. In its 2011 catalogue, Christie’s noted the watch was made in 1950 and sold in 1953 according to the archive extract. But today Sotheby’s says it is accompany by an extract stating it made in 1954 and sold in 1955. We have reached out to Sotheby’s to shed more light on this. I expect it was a typo in either catalogue.

Like the VC&A repeater above, the Patek Philippe ref. 5217P is lavishly gem-set and highly complicated, but unlike the VC&A it has a formal, traditional aesthetic.

The ref. 5217 is essentially the diamond-set version of the ref. 5216, a mega-complicated watch that includes a tourbillon, minute repeater, as well as a perpetual calendar with retrograde date. Despite the complications, the slim, compact movement inside allows it to remain a svelte 39.5 mm wide and 12.5 mm tall. While the ref. 5216 is grand complication, it is a low-key watch with a Calatrava-inspired design. In contrast, the ref. 5217 goes all out to impress with baguette diamonds on the bezel, lugs, and taking the place of the hour markers on the dial. The gemstones are a good match for the grand mechanics, so the result is compelling. Inside the ref. 5217P is the cal. R TO 27 PS QR, a movement developed in the 1980s but still a classic in the brand’s stable of calibres. The fact that it’s a top-tier movement by Patek Philippe is illustrated by the top-class finishing, exemplified by the “octopus” wheel with serpentine spokes that are rounded and polished. 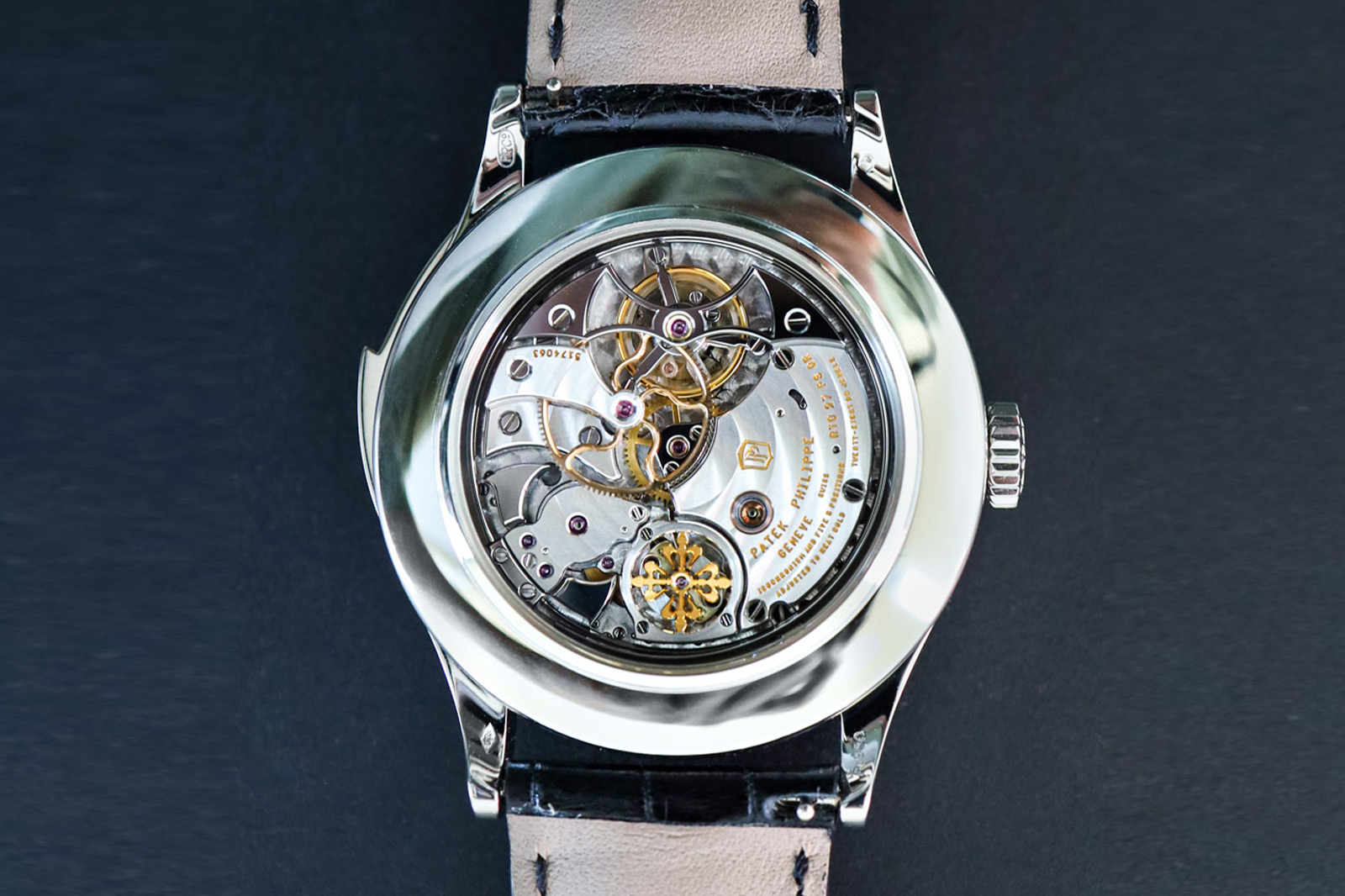 Notably, this example is the first ref. 5217 to appear at auction, highlighting the rarity of the reference. This example is like new and has all the original box and papers. It has an estimate HK$6.0-10 million, or about US$765,00-1.28 million. Full lot details here.