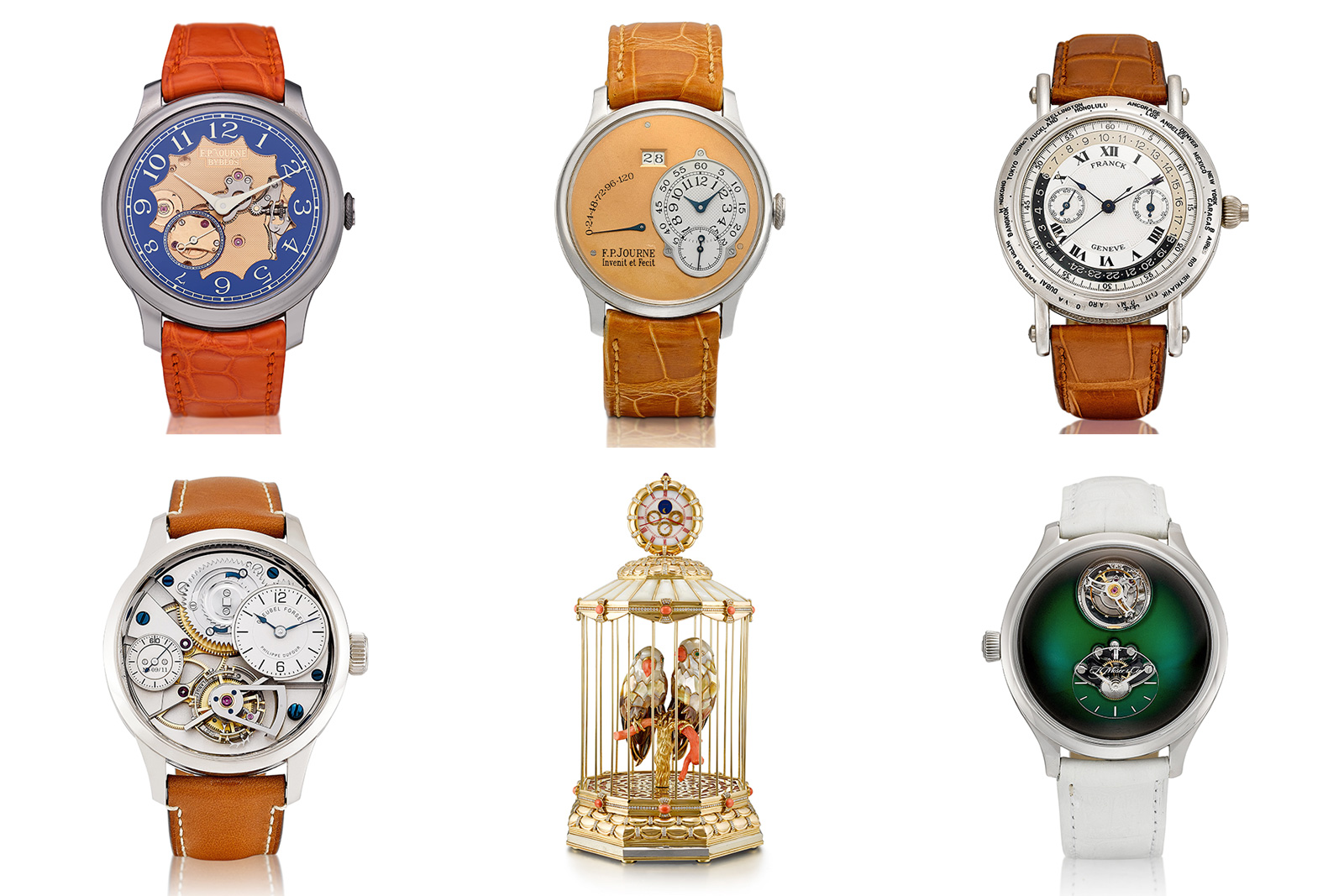 Sotheby’s forthcoming Important Watches I in Hong Kong is the first live auction of the year by a major auction house, or so accurately it’s the second day of the auction, with the sale of a mega, single-owner Patek Philippe collection happening in the evening the day before. With the strong demand for independent watchmaking, the 214-lots sale encompasses timepieces from a range of niche and not-so-niche indies.

The lineup is naturally led by F.P. Journe, perhaps the marquee name in independent watchmaking today, but the most valuable lot is the very rare and very expensive Montre École, one of 11 watches born of the Naissance d’une Montre project backed by Greubel Forsey and Philippe Dufour.

We round up six highlights from amongst the independent watchmakers at the sale, which starts at 2:00 pm (GMT +8) on April 26, 2022. Registration for bidding and the full catalogue can be accessed here. Having been business partners for a decade or so – Moser’s sister company supplies hairsprings to MB&F – the two brands revealed their first collaboration in 2020 when both coincidentally celebrated their 15th anniversary. The more complicated of the two anniversary editions, the Endeavour Cylindrical Tourbillon was more Moser than MB&F with its dial colour and movement, and it certainly didn’t disappoint. 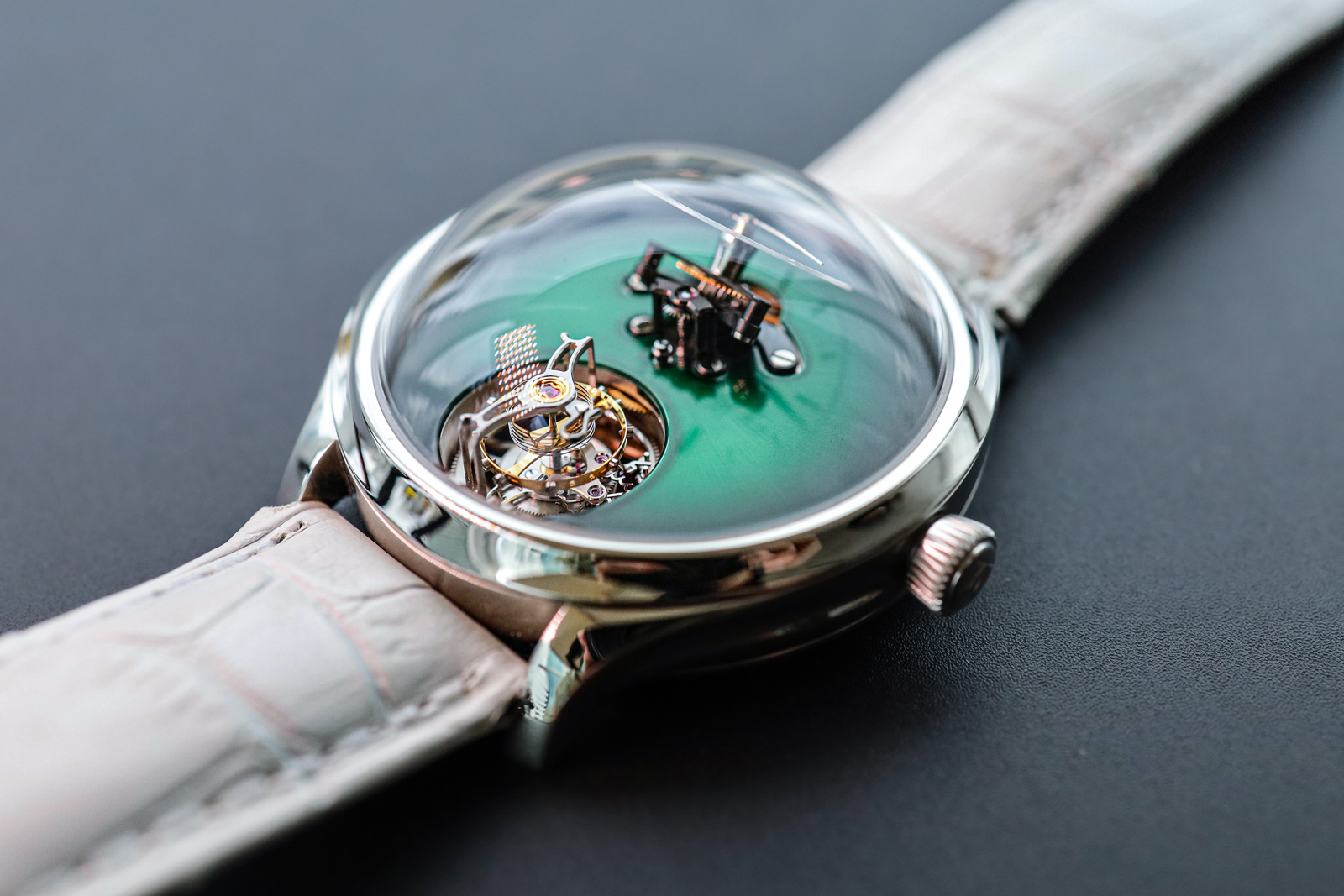 The Cylindrical Tourbillon combines the best of both brands. The aesthetic of Moser immediately stands out with the green fumé dial and Endeavour case, but on closer inspection elements of MB&F’s funky design are apparent, primarily in the highly-domed crystal that accommodates the inclined time display and tall tourbillon. 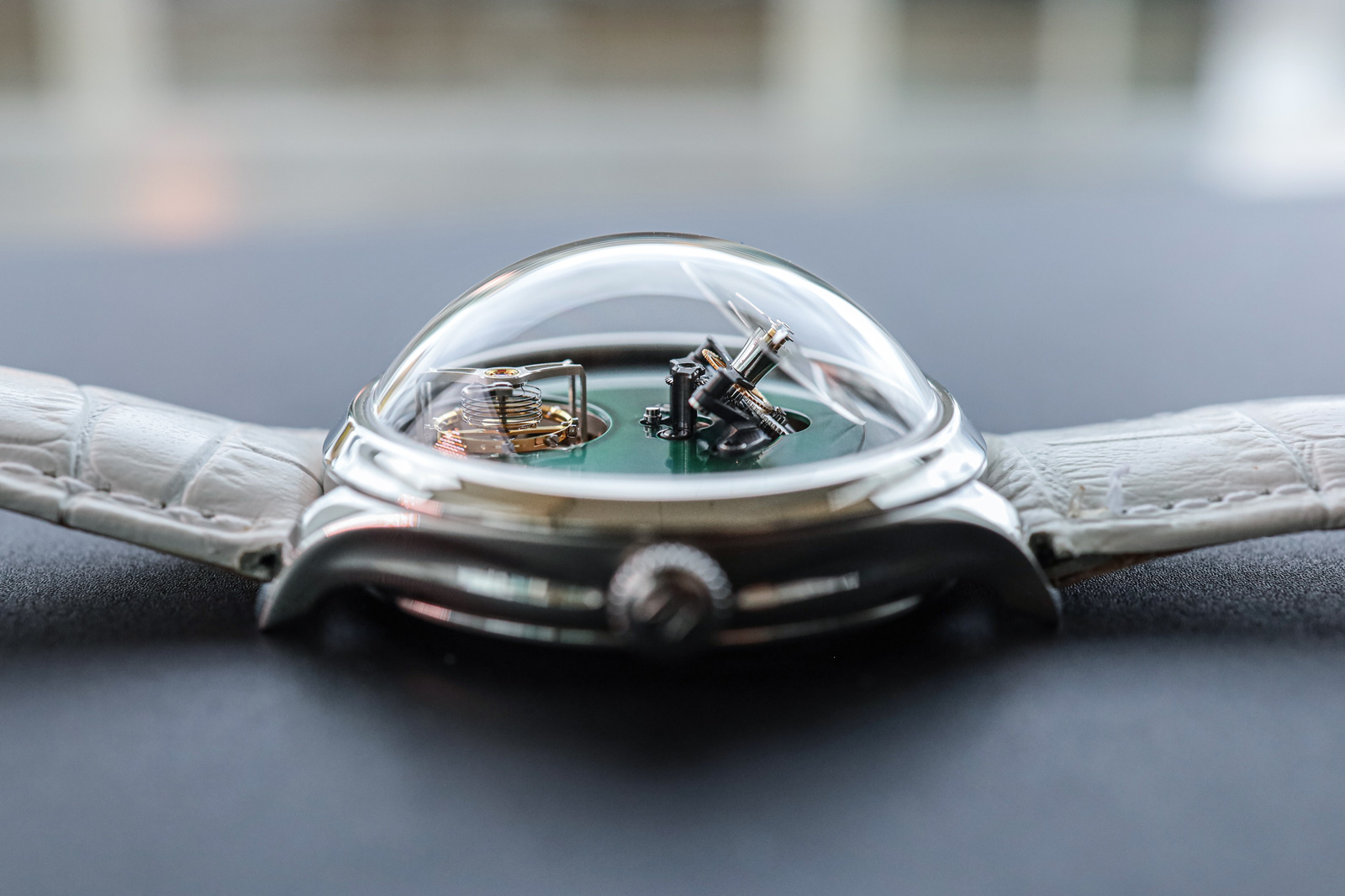 There were five versions of the tourbillon, each with a different dial and limited to 15 pieces but all with steel cases. The present example has a green gradient dial, certainly one of the more striking dial colours. 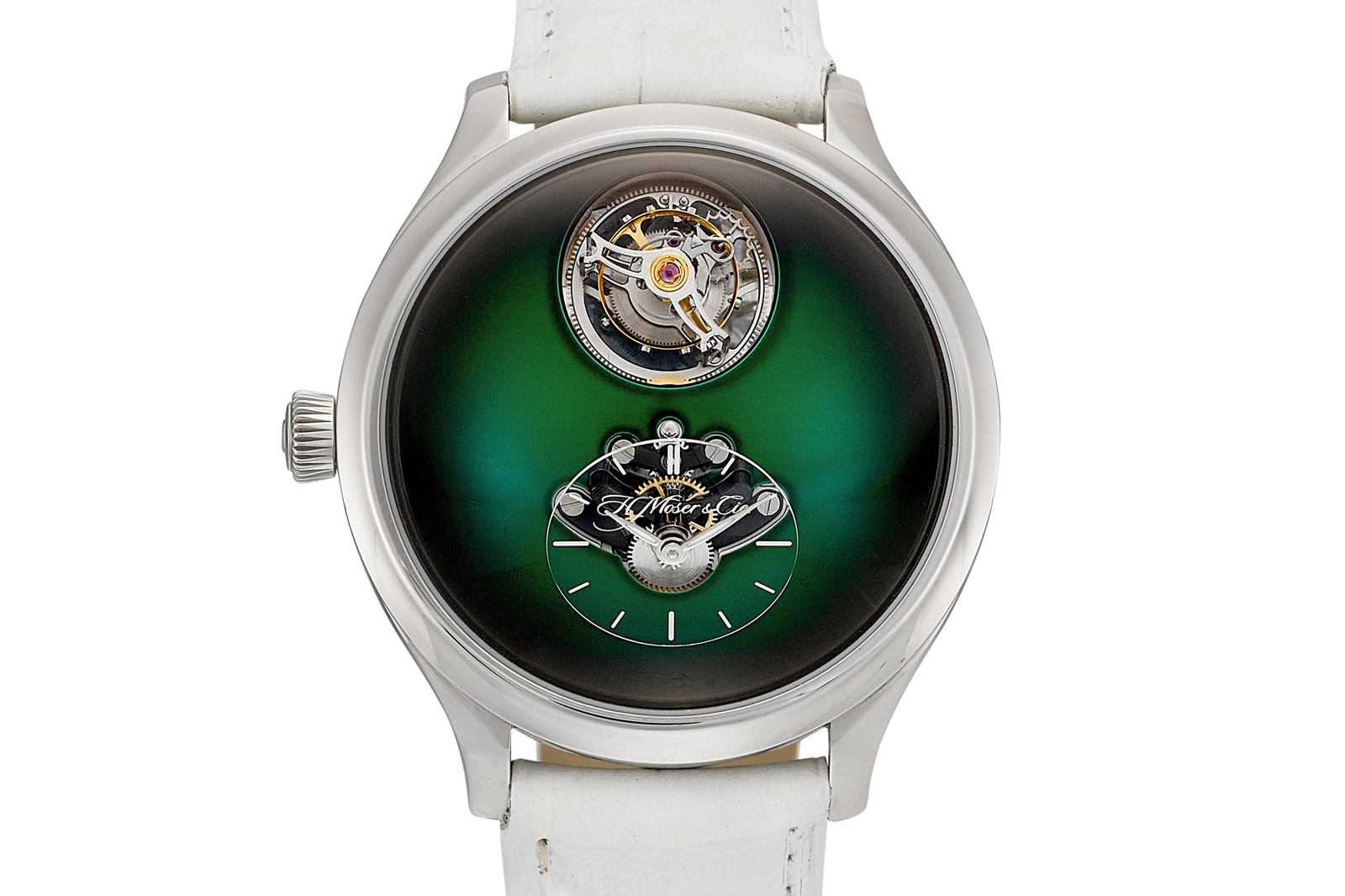 One of the original three models launched by F.P. Journe, the Octa Réserve is a simple watch yet instantly recognisable thanks to its distinctive, asymmetric display that has an appealing sensibility. The simplicity of the watch, especially compared to the brand’s Resonance and tourbillon, might lead one to mistakenly think the Octa is less significant or valuable. 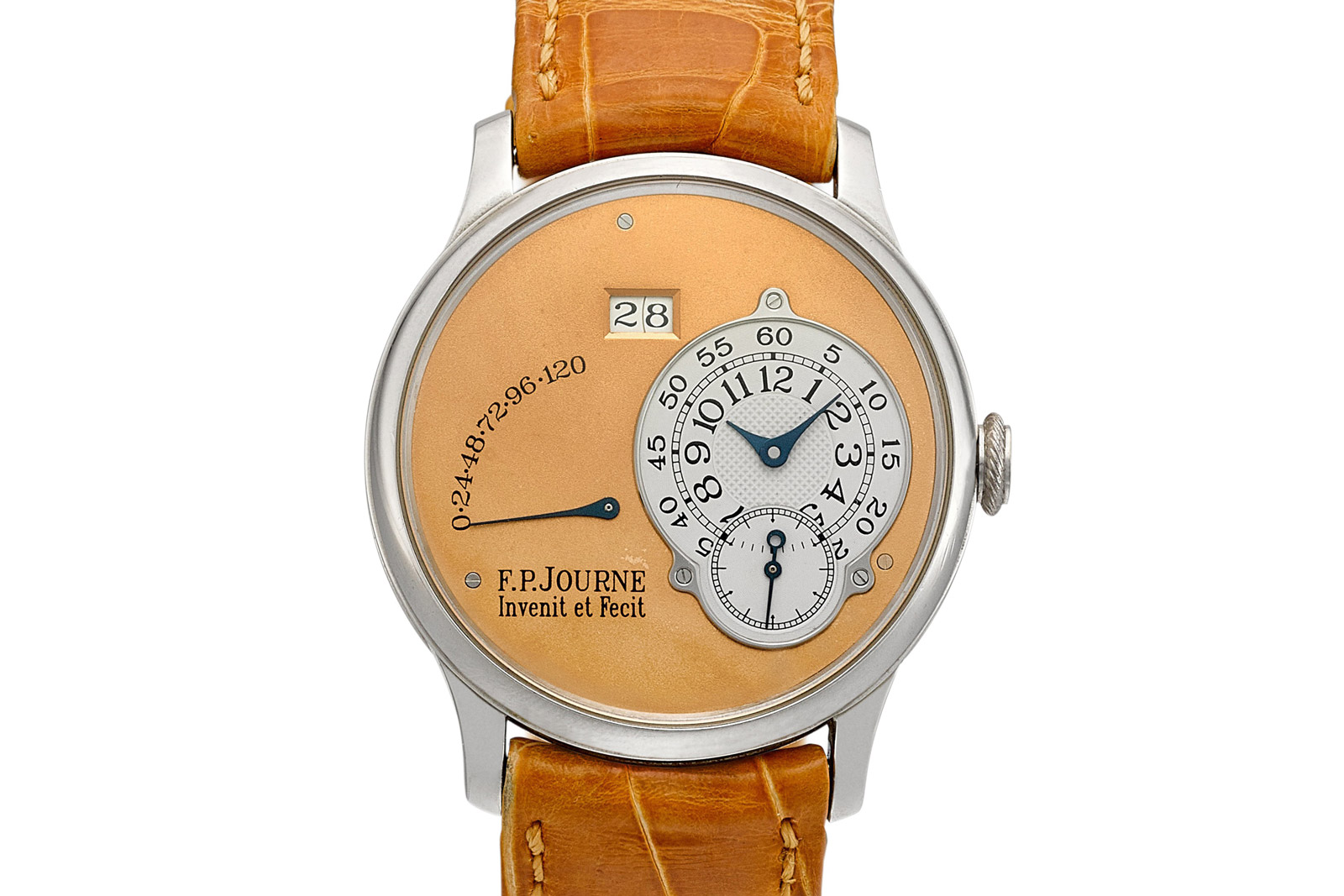 Classic F.P. Journe in size and materials, the Octa is 38 mm wide with a platinum case and brass movement, encapsulating all the traits associated with the brand’s earliest offerings. All these elements are no longer found in the current catalogue, making them desirable. 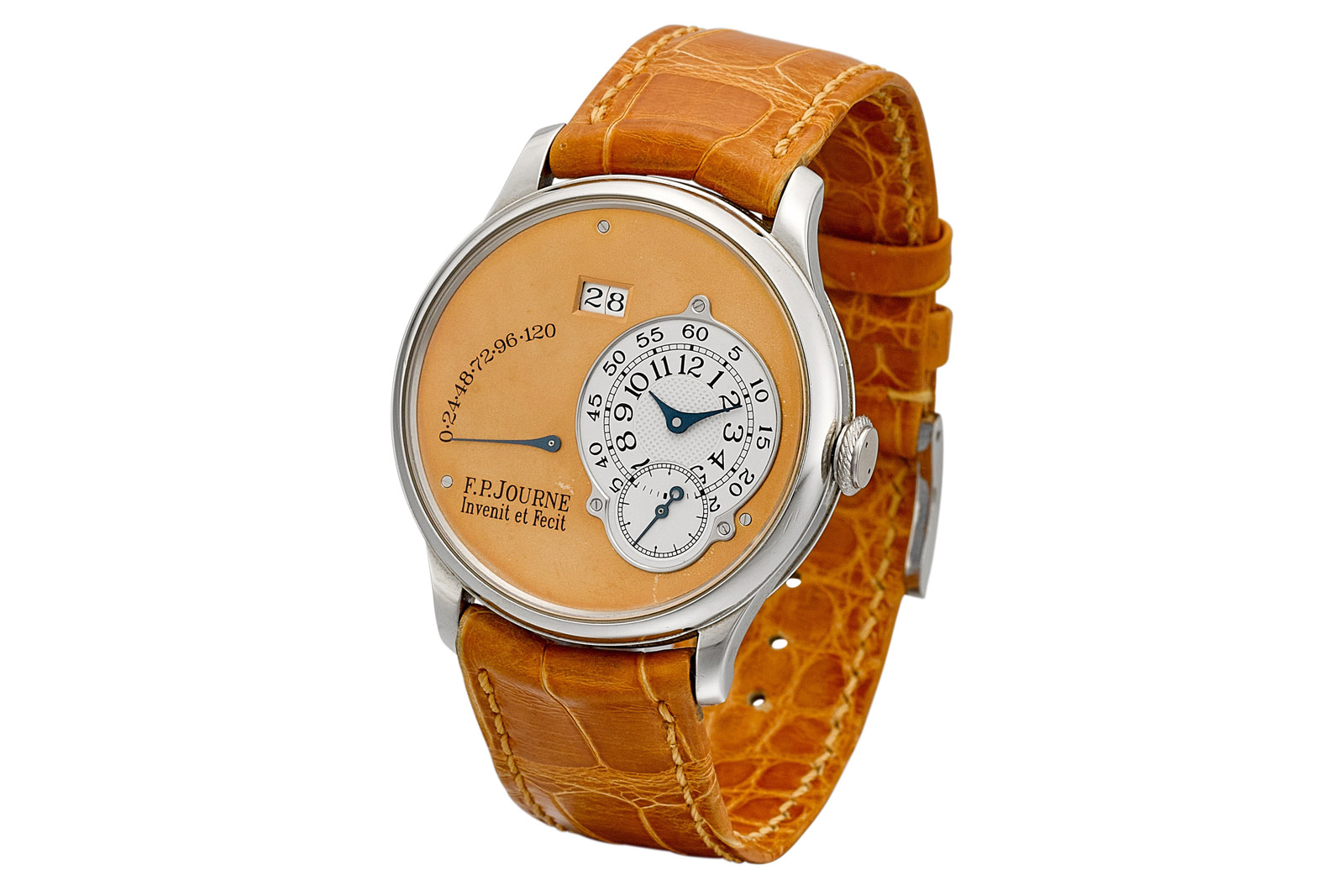 The present example does one better, being an intriguing example with characteristics of different generations.

It has straight Geneva stripes on the bridges instead of circular striping that later became the norm, indicating it is one of the earliest examples of the Octa movement. At the same time, it has a pink gold dial that is more commonly found with later versions of the model. Similarly, the “190” serial number and 2002 year indicates it came about later in the production run. One of F.P. Journe’s best known models, the Chronometre Bleu was conceived as the brand’s entry-level watch but was anything but basic. It combined a reflective blue dial and tantalum case, while also being the base for the striking Byblos.

Featuring an open dial that’s rarely used by the brand, the Bylos was a limited edition of 99 pieces created to mark the opening of the brand’s tenth boutique that was located in Beirut, Lebanon. 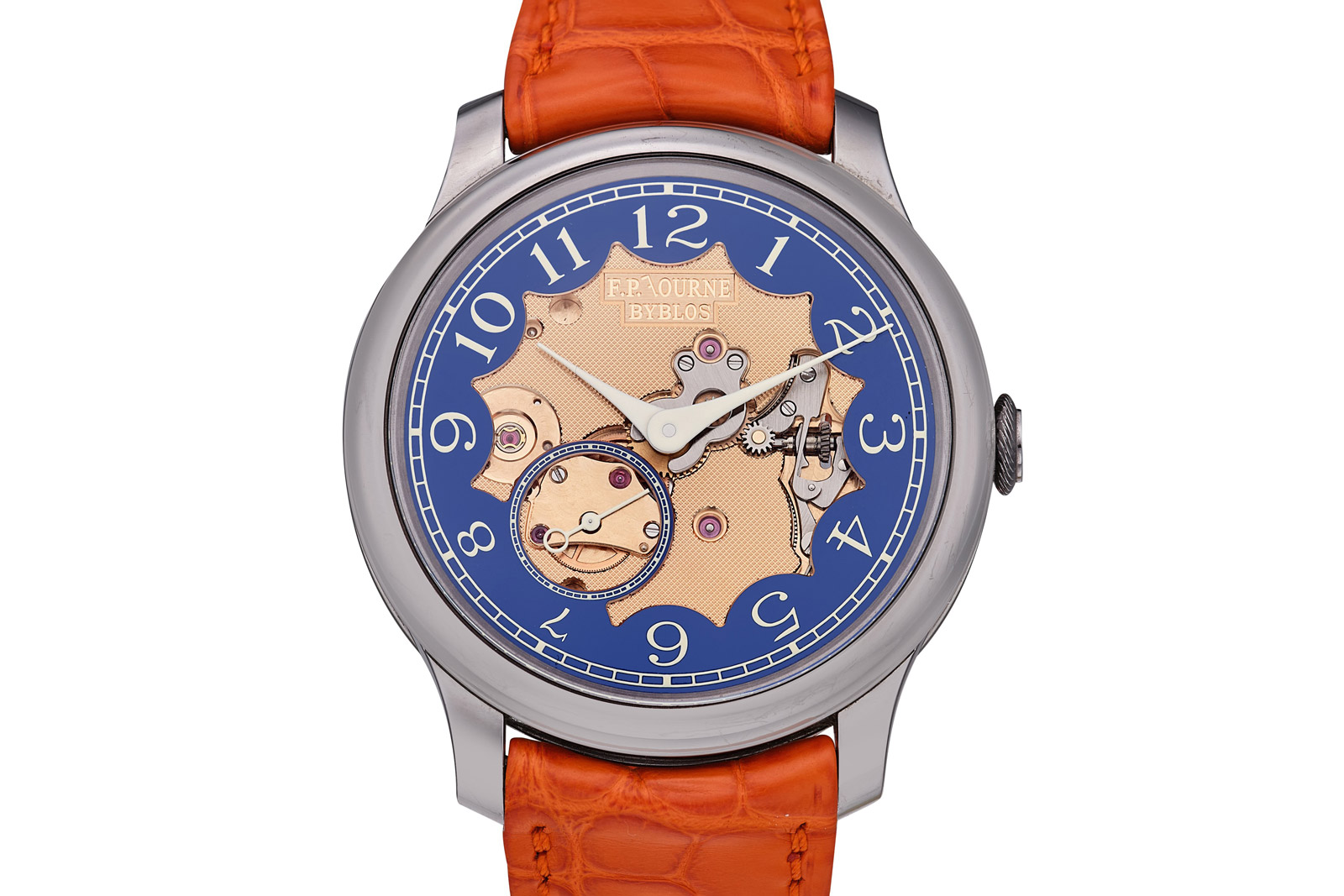 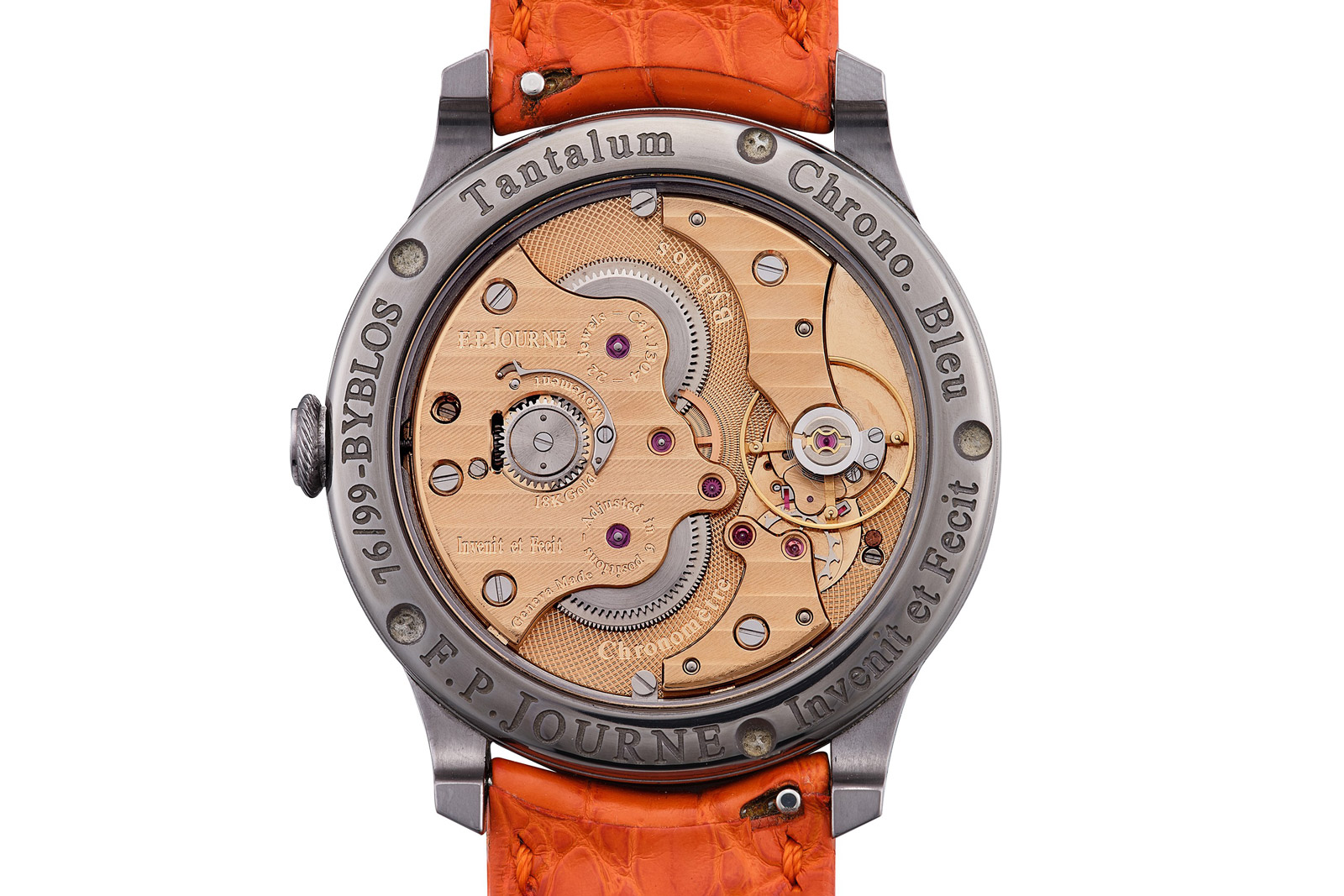 While the key feature of the Byblos is the sun-shaped opening on the dial that reveals the engine-turned red-gold base plate, it has another intriguing but subtle detail – the brand logo that has “J” replaced by the equivalent symbol from the Phoenician alphabet, the language of the region in ancient times. Though best known for his brilliant designs for luxury-sports watches, Gérald Genta created extraordinarily lavish clocks while running his eponymous brand in the 1990s. With the wristwatches designed by Genta in the 1970s all the rage today, this clock is a novel, fresh proposition for about the same as a steel Nautilus.

An imposing object crafted for the desk, the clock takes the form of a birdcage containing a pair of lovebirds that play a tune when the mechanical music box within is activated. Like all of Genta’s unique clocks of the period, it is made entirely of precious materials – gold, mother of pearl, coral, and gemstones. 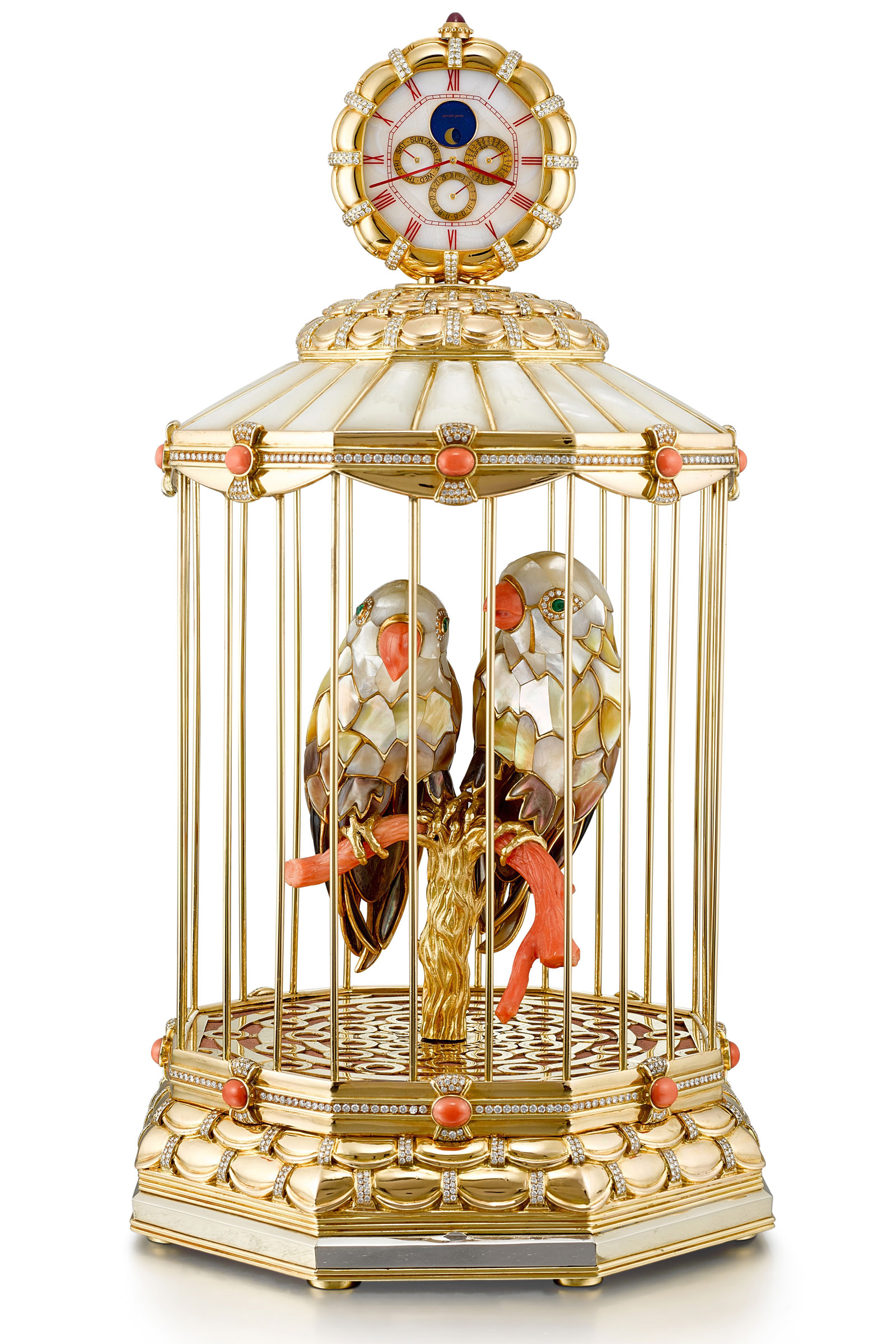 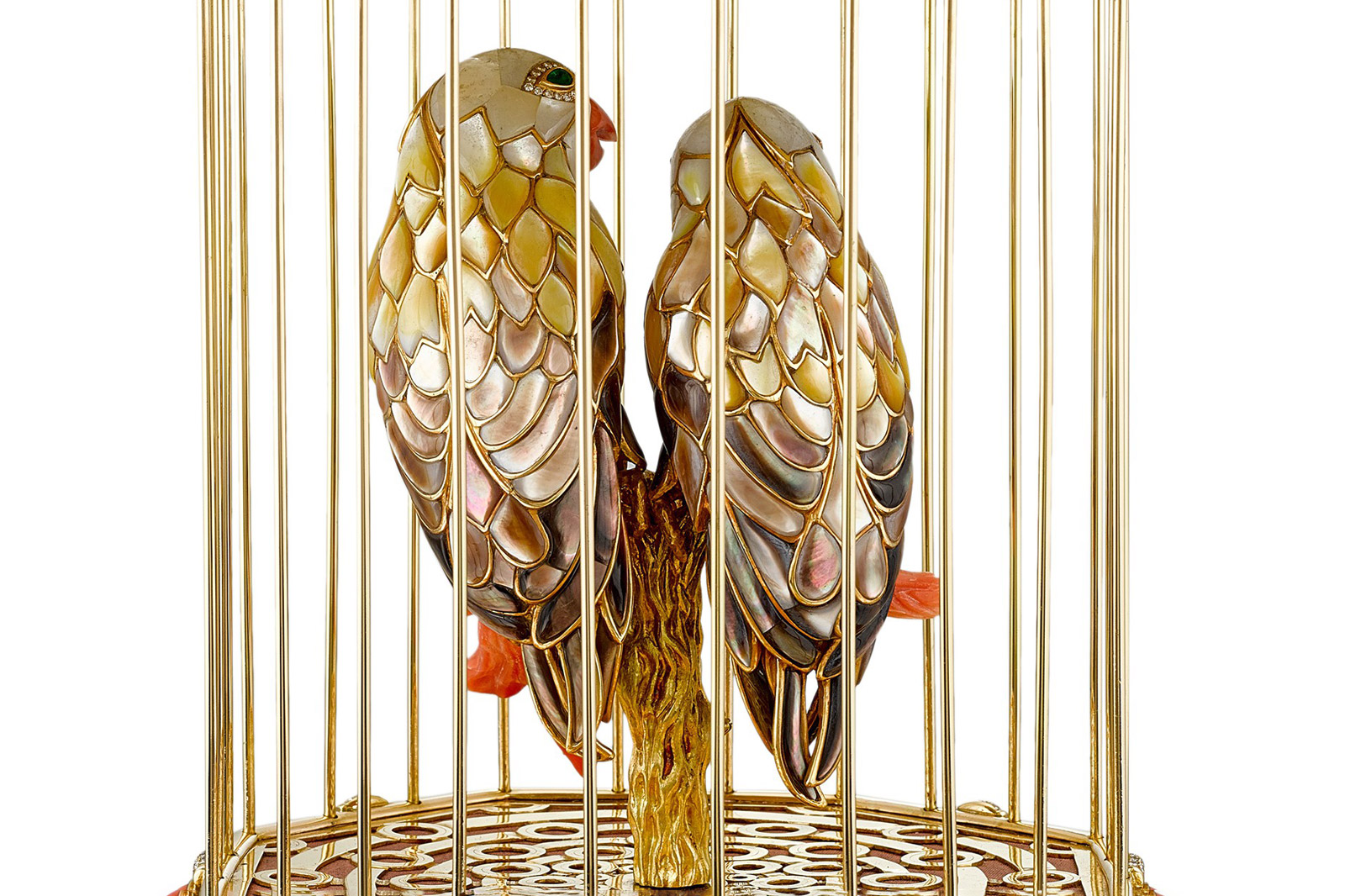 At the top of the sculpture is a small clock, a perpetual calendar in fact, albeit one powered by a quartz movement. It is contained in a case that echoes Genta’s wrist and pocket watch designs of the period, a vaguely octagonal form with a doubles-stepped, scalloped bezel that is decorated with diamonds and a ruby cabochon on the crown. One of the top lots of the sale is the Montre École, which translates as “school watch”. A limited edition of 11 watches, the Montre Ecole was the first watch to result from Naissance d’une Montre, the first project undertaken by Time Aeon, foundation established by notable independent watchmakers to ensure the transmission of watchmaking know-how to the next generation. The Montre École” is essentially a Greubel Forsey in style and execution – the case, movement construction, and finishing call to mind the brand’s watches – except it was almost entirely hand made by one watchmaker. It was made by Michel Boulanger, a French watchmaker who built the watch – by hand and with only traditional tools – with the guidance of Greubel Forsey and Philippe Dufour. 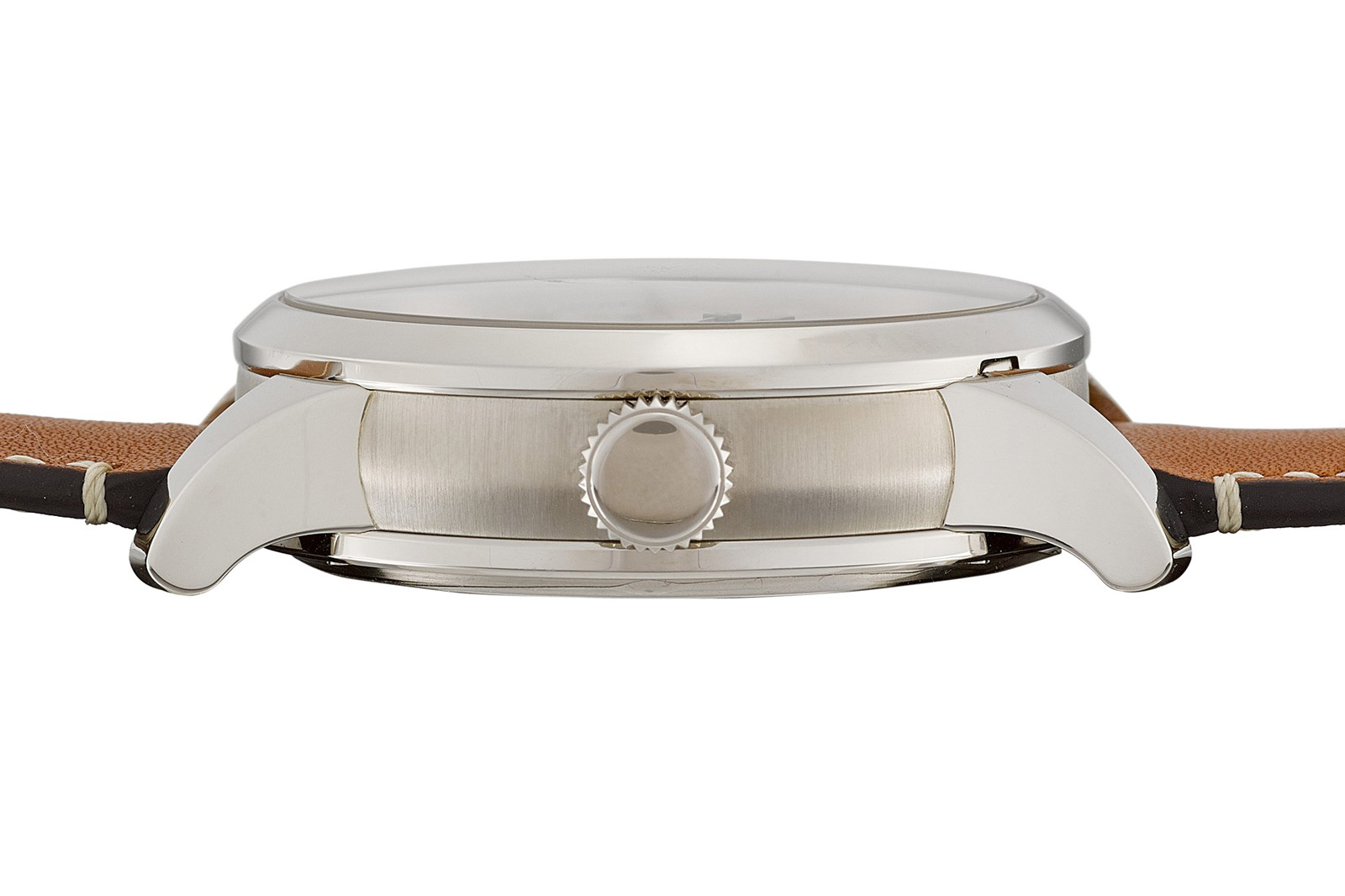 The project started at the end of the Financial Crisis, but fortunately the nature of the watch meant it took years to complete. The prototype was only finished in 2015 and then sold a year later at Christie’s for almost US$1.5 million, an impressive result for a new watchmaker.

Once an independent watchmaker but now a big brand with revenues of about CHF350 million, Franck Muller encapsulates the ups and downs of contemporary independent watchmaking. While the brand is most famous for its tonneau-shaped case, the classical chronographs made by Mr Muller in his early days are appealing for their unusual concept.

Amongst the most interesting is the Janus, a chronograph with a two-faced display inspired by vintage pocket watches that was one of Mr Muller’s signature creations.

Heavily inspired by Breguet, it has an guilloche dial inside a 38.5 mm case with fluted sides. But it has the addition of a cities bezel and 24-hour ring that calls to mind the Cottier-style world time watches by Patek Philippe and Vacheron Constantin. 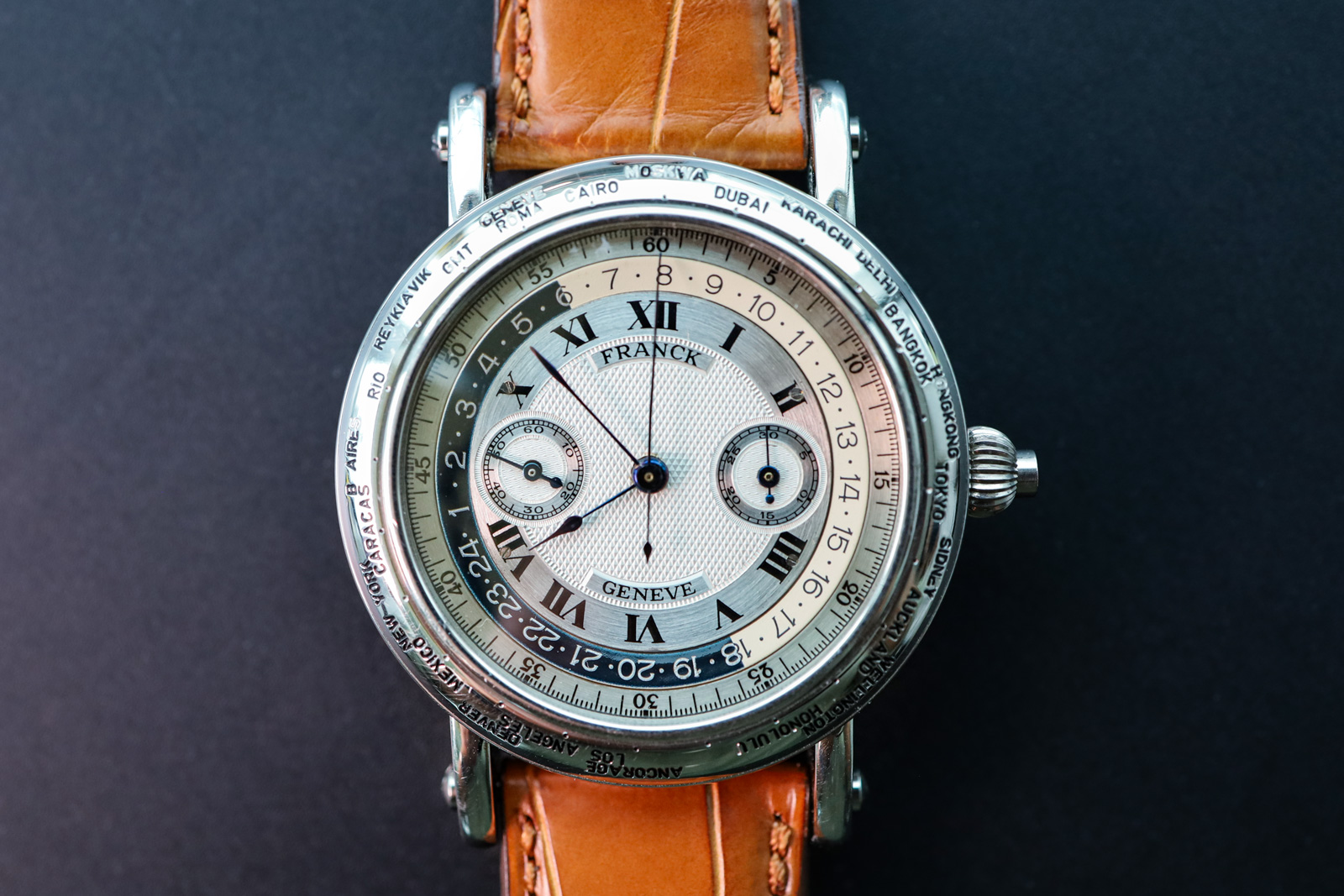 But the key complication is the mono-pusher chronograph that has a conventional, two-register display on the front. But it also has a second display on the back featuring an oversized elapsed seconds that allows for easy reading of the pulsations scale, along with an elapsed minute counter. This double face feature would later go on to be found on several of Franck Muller’s chronographs. The reverse dial shows obvious ageing due to moisture

Like many of Mr Muller’s creations of the period, the Janus was powered by a vintage movement – in this case a 19th century pendant watch calibre – that was modified but undecorated, reflecting Mr Muller’s preference for clever complications rather than finishing.