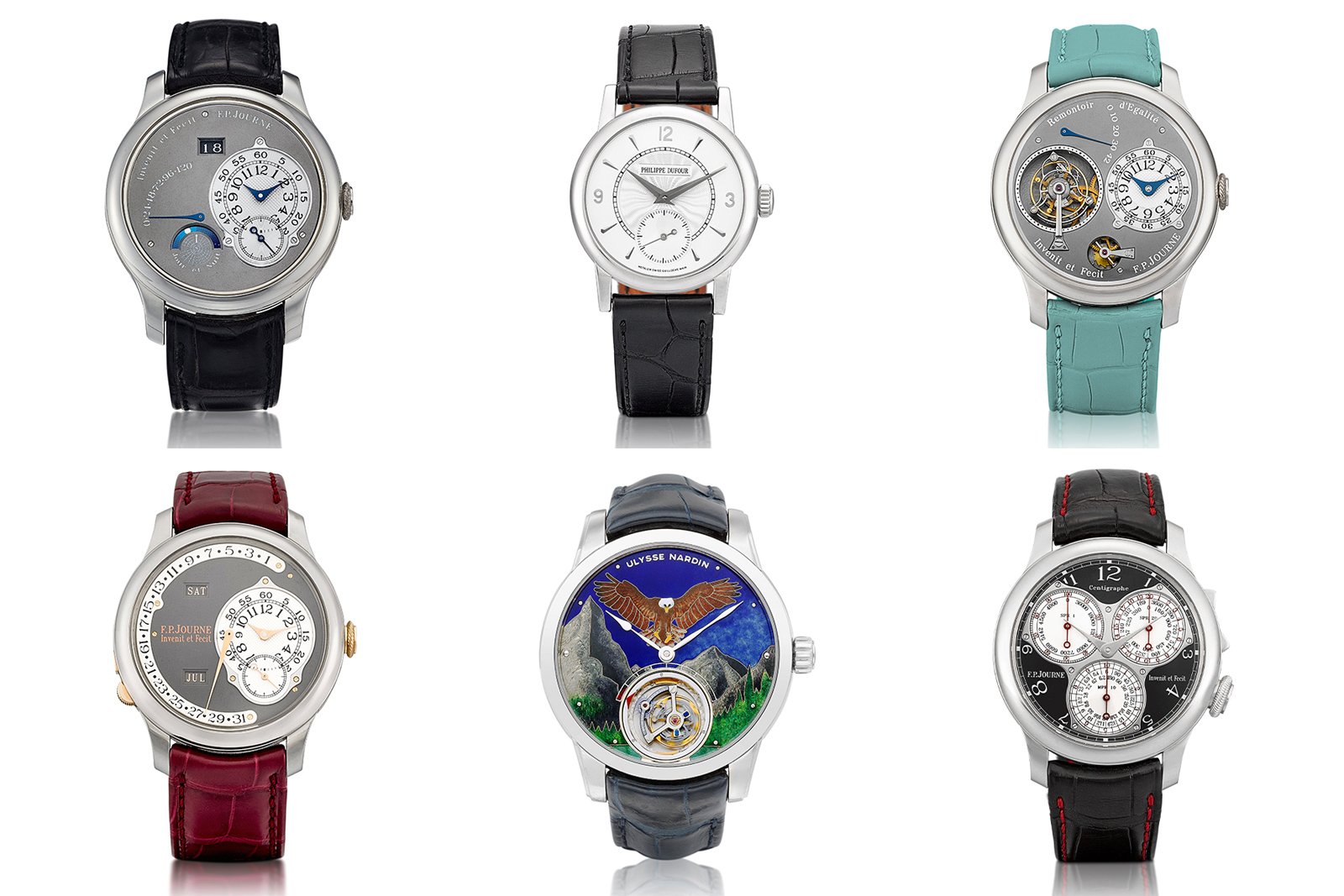 We have round a magnificent seven of the “indies”, which naturally includes a Philippe Dufour Simplicity – 34 mm and guilloche dial – along with several limited-edition watches from F.P. Journe, now perhaps the establishment independent brand, and also a few more timepieces that are arguably underrated and potentially value-buys. 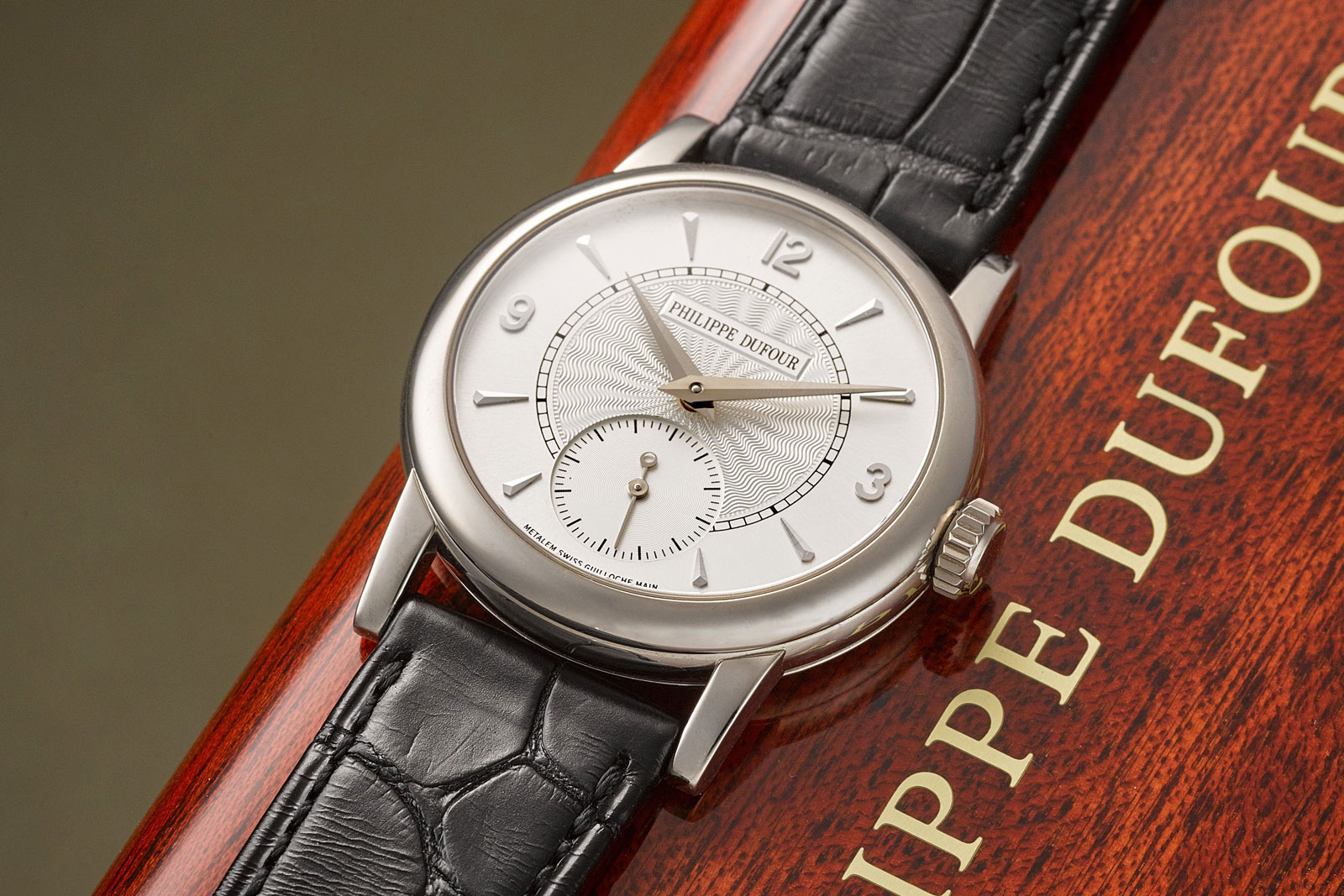 A watchmaker famed for his unmatched focus on movement decoration, Philippe Dufour has only produced a handful of models across a five-decade career, but is often regarded as one of the greats thanks to his artisanal approach to classic Vallee de Joux watchmaking.

While he’s made more complex watches, he is perhaps best known for the Simplicity, a fuss-free, time-only watch that does only one thing but does it well: impeccable movement finishing. 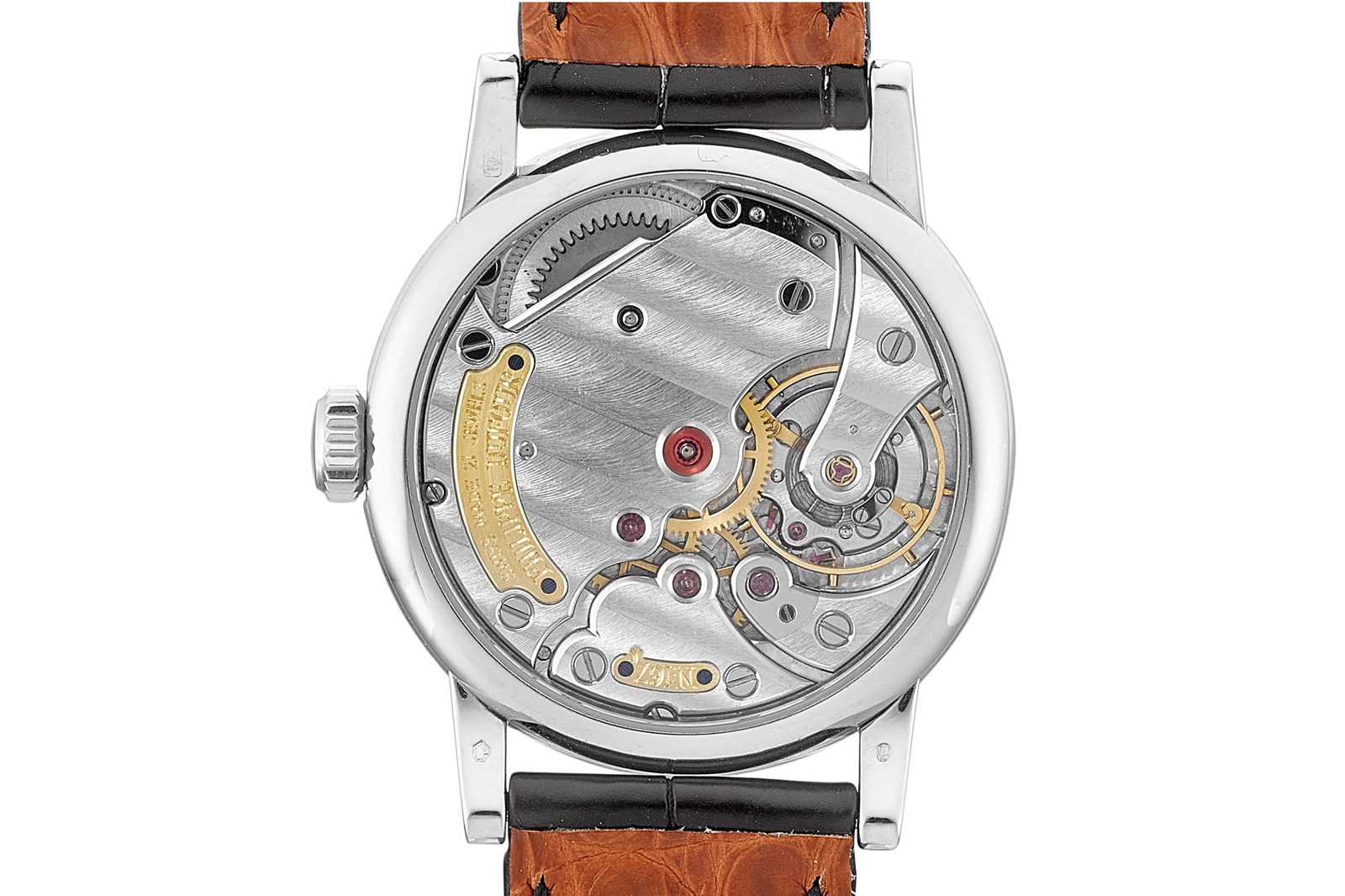 Going under hammer at Sotheby’s is a classic example of the Simplicity, one that’s almost identical to the one Mr Dufour himself wears. Well suited to purists, this example is 34 mm, white gold, and fitted with a guilloche dial featuring Arabic numerals at the quarters.

Though the Simplicity is more common in gold is than platinum, the present example stands out for its 34 mm case. The compact size is straight out of mid-20th century horology and is actually more scarce, as compared to the 37 mm that was made to cater to modern tastes. 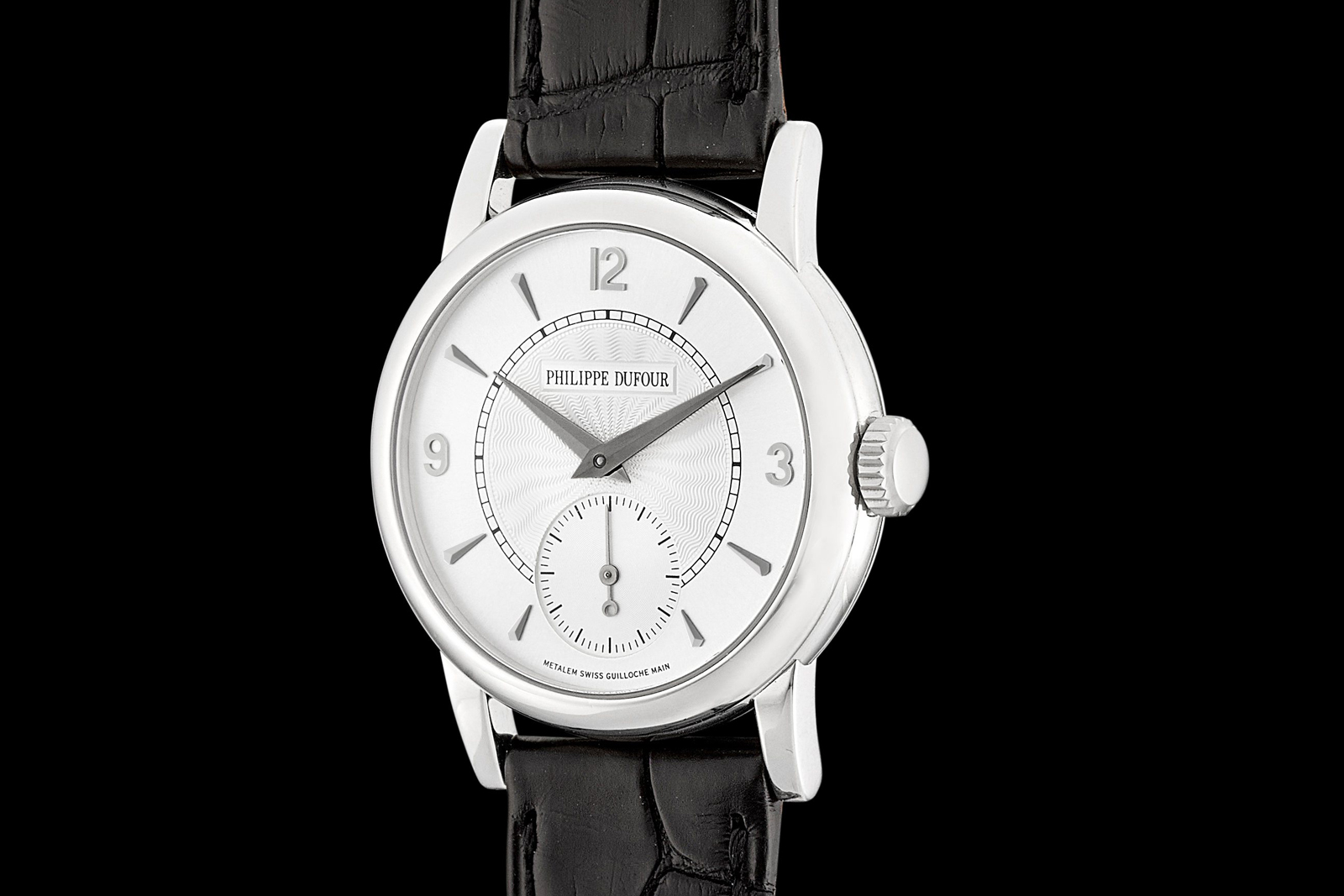 One of the earliest limited editions released by F.P. Journe, the Ruthenium collection was a five-model series that bid farewell to the brass-movement era as the brand transitioned to solid-gold movements. The Ruthenium editions also all had 40 mm cases, instead of the standard 38 mm of the period, making them amongst the first 40 mm F.P. Journe watches. 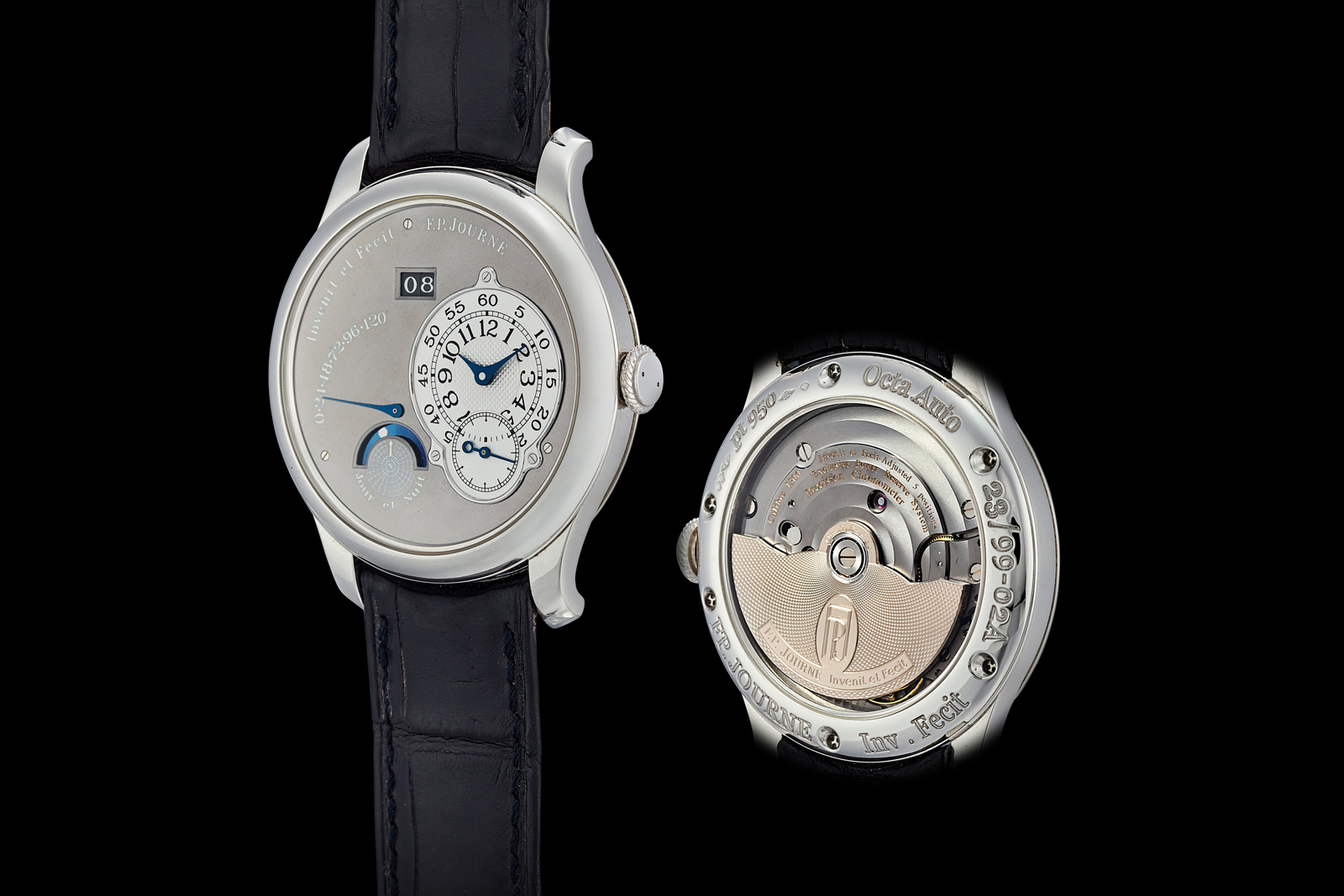 Amongst the lesser-known models in the series is the Jour et Nuit Ruthenium. Based on the Octa Reserve de Marche, the Jour et Nuit retains the same design and functions except for the addition of a blue day-and-night disc with at seven o’clock that’s a perfect match for the dark grey dial.

Notably, the Jour et Nuit – French for “day and night” was the only all-new creation in the Ruthenium series, as opposed to being a variant of a standard model. It was truly one-off edition with neither preceding nor subsequent iterations. 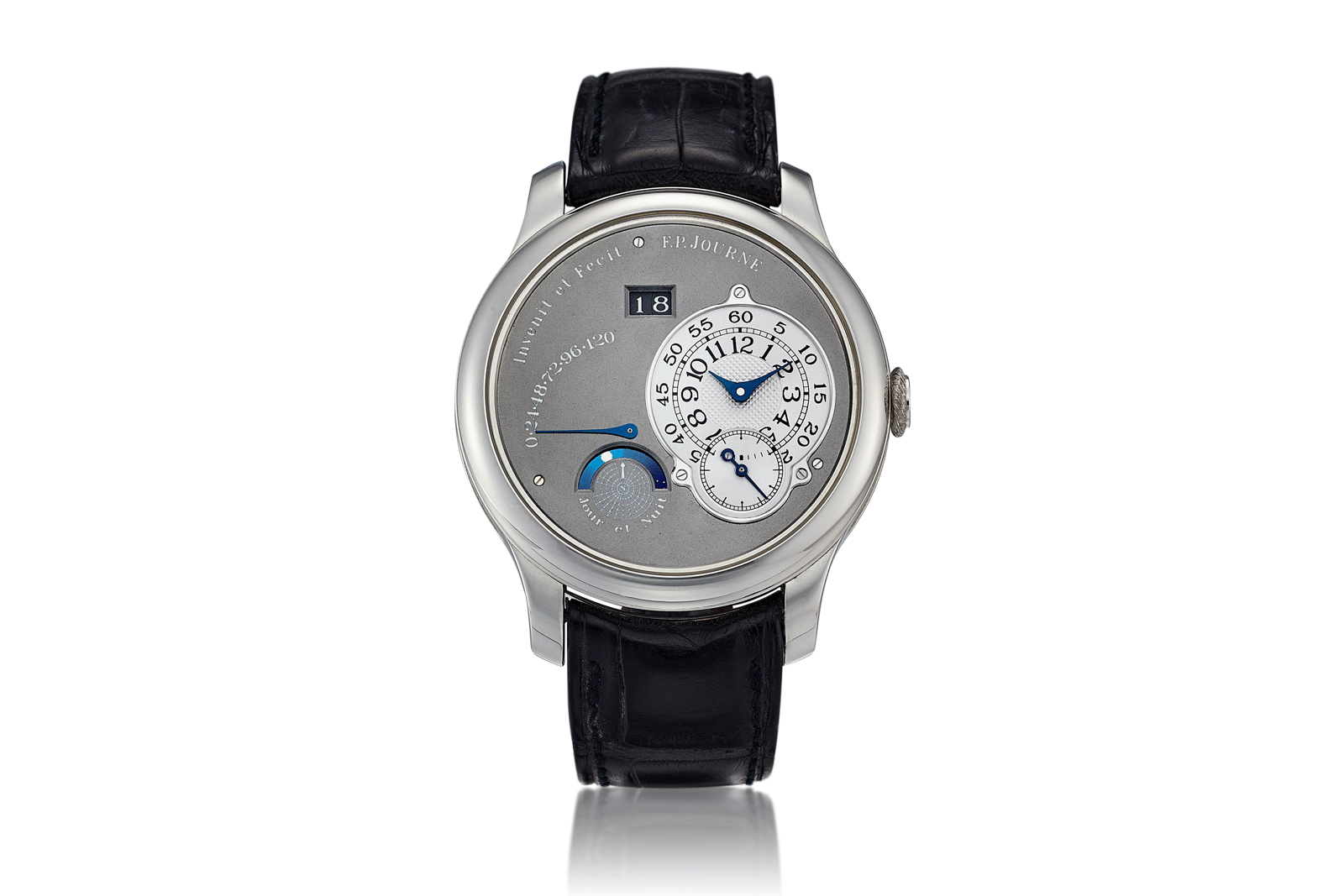 Despite the Ruthenium label, the case is made of platinum, while the dial and movement are plated in ruthenium, resulting in the dark-grey finish makes these watches distinct from the common gold or silver dials. The result is a watch that is different and stylish but still very much quintessential F.P. Journe. Black Label refers to a limited-production watches featuring black dials and white sub-dials that are available only at F.P. Journe Boutiques. This treatment can be applied to any current model, including the iconic Tourbillon and Resonance, but quantities are limited to a maximum of two Black Label pieces per model annually at each store. And the watches can only be sold only to existing owners of F.P. Journe watches. Despite not being a limited edition, Black Label is certainly uncommon. The present example is the brand’s flagship chronograph in Black Label livery. Though the palette is stark, it is undeniably attractive. Compared to other Black Label models that are largely monochromatic, the Centigraphe stands out with its red accents that enhance the sporty nature of the watch.

The dial has extra-large registers and red accents, while the movement is capable of measuring up to 1/100th of a second, thanks to the lightning seconds hand at 10 o’clock that makes 60 revolutions per minute. 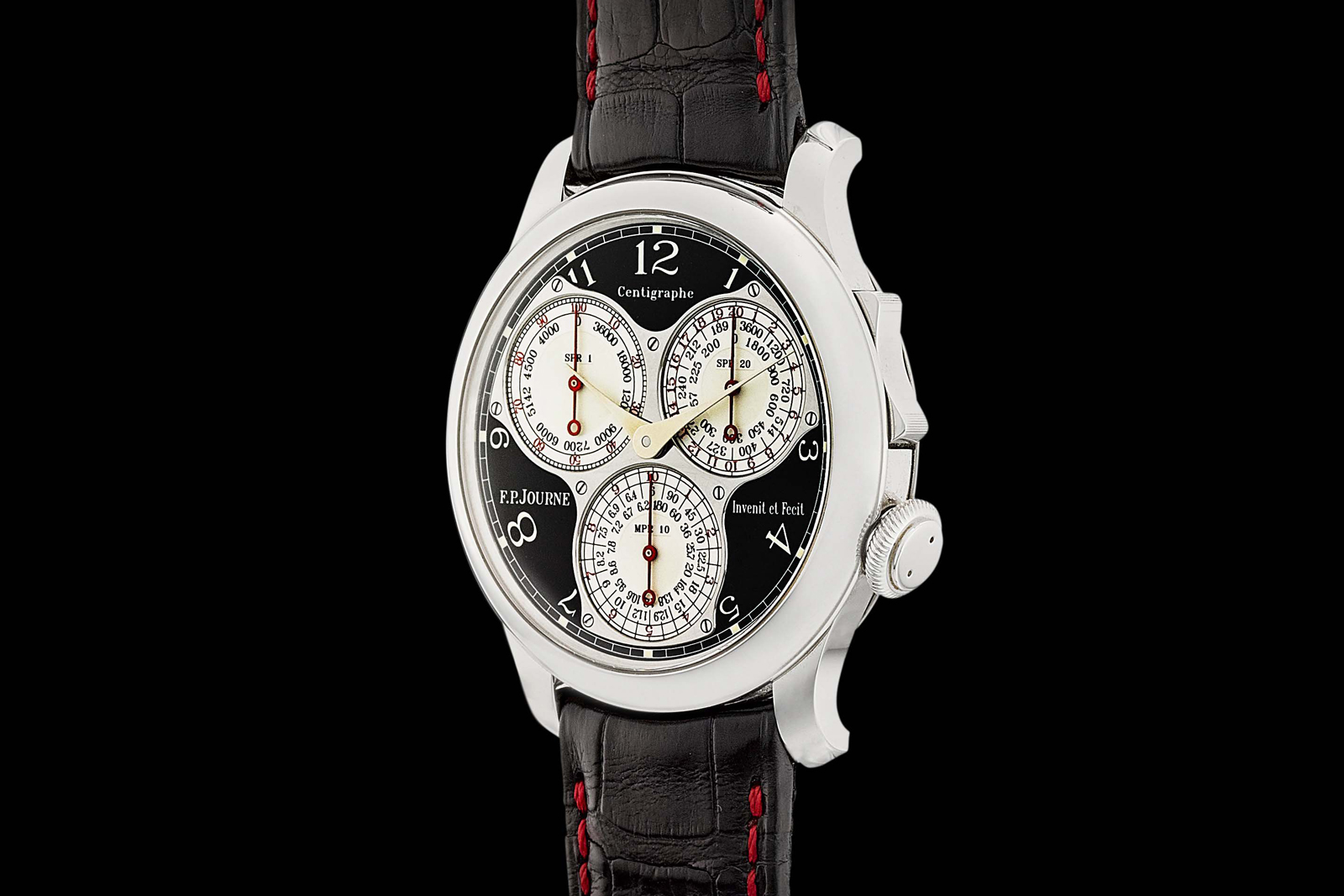 Striking in black, silver, and a touch of red

While the design is appealing for the symmetrical layout, the Centigraphe is more notable for the innovative movement construction. It utilises a conventional, 3 Hz balance wheel and intermediate gears that allow for measurement of 1/100th of a second, while preserving the elegantly thin profile that’s a signature of the brand. Distinguished by the aperture at six o’clock revealing the remontoir cock, the first-generation F.P. Journe Tourbillon Remontoir d’Egalite needs little introduction, but the model’s many variations might be difficult to keep up with, especially since the changes between them are mostly subtle. But one iteration stands out easily, the Tourbillon Souverain Ruthenium, thanks to its dark-grey dial that’s immediately different from the classic dials in yellow, white, or rose gold. Not only the dial is coated in ruthenium, the brass movement has also been given the same treatment, again setting it apart from the earlier rhodium-plated brass movements as well as the later solid-gold movements. Numbered “28/99”, the Tourbillon Souverain Ruthenium is complete with the original box and papers, as well as accessories such as a folding clasp and loupe. 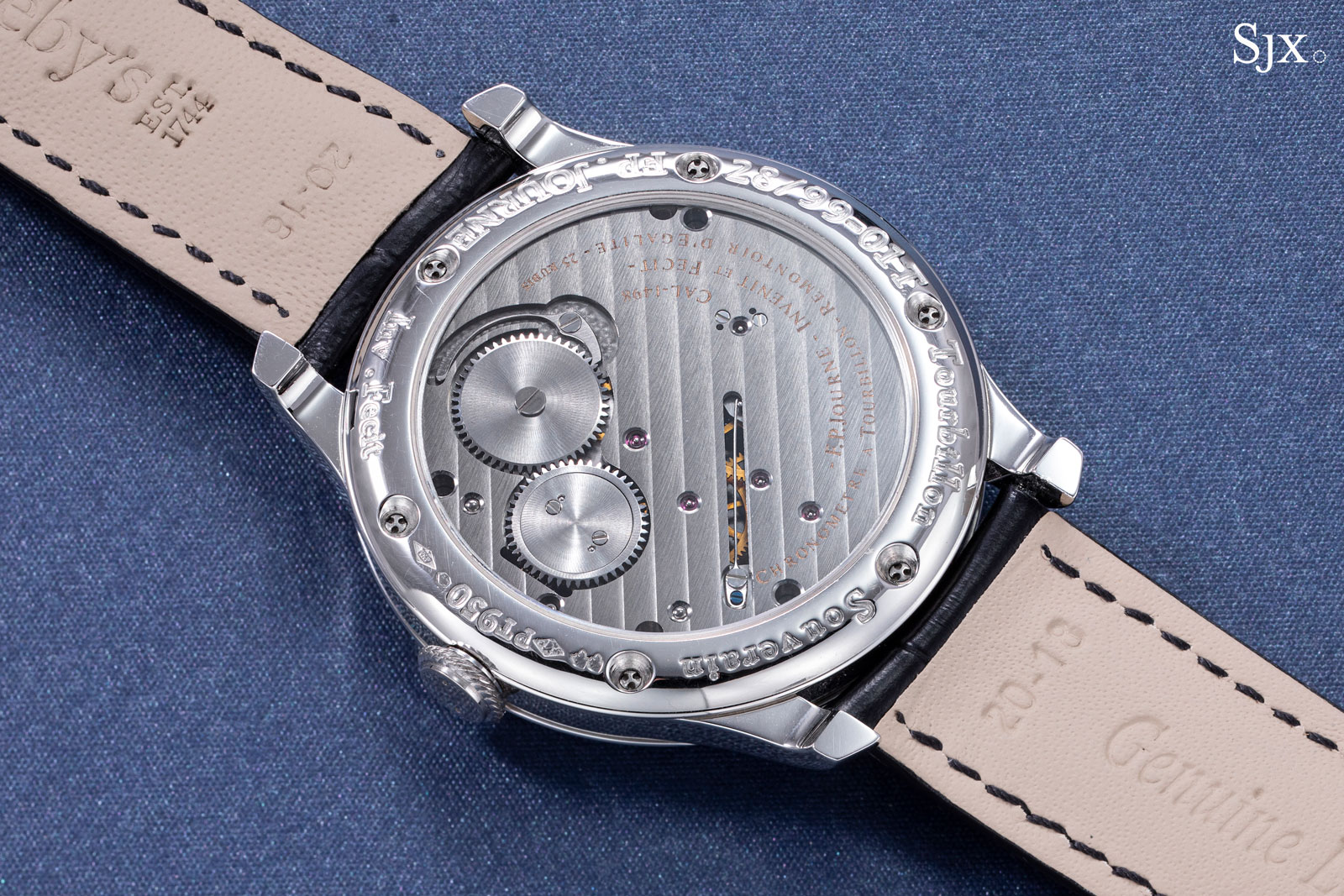 While Ulysse Nardin is not a small-scale independent watchmaker like Dufour or Journe, the brand is no longer owned by a luxury conglomerate, having been bought out by its management. That makes it something of a rarity in Swiss watchmaking – an independent, mid-sized brand.

Despite its small scale, Ulysse Nardin boasts an impressive degree of in-house manufacturing, as demonstrated this Ulysse Nardin Anchor Tourbillon. It’s powered by an in-house movement equipped with a tourbillon and remontoir, while the cloisonné enamel dial is made by Ulysse Nardin’s subsidiary Donze. (And it happens to be extremely good value, by far the best of the seven watches featured here in fact, with a low estimate of only US$38,000.) The Anchor Tourbillon is an impressive watch in terms of mechanics. In fact, it’s is one of the most innovative constant-force tourbillons of the modern era, thanks to the unique Anchor Escapement contained within the tourbillon.

Made entirely of silicon, the Anchor Escapement consists of a pallet lever with built-in springs that provide elasticity, so that its arms deliver the same amount of force to the balance regardless of the energy supplied by the mainspring. The result is a smartly simple and high-tech constant-force mechanism. The present example also stands out for being a unique piece that was commissioned by the owner. Unlike the standard model that features single-colour enamel dials, this watch has a cloisonné enamel dial depicting a bald eagle with wings spread soaring over a mountain range.

Even though the theme seems American, the dial has a Chinese character discreetly hidden on the mountain at nine o’clock – most likely the surname of the collector who commissioned the watch. The back is engraved “LIMITED EDIITON” while the movement bears “UNIQUE”

The Octa Perpétuelle Anniversaire Tokyo was introduced in 2009 for the fifth anniversary of the Tokyo boutique, the brand’s first. Like the Octa Jour et Nuit Ruthenium above, it was an all-new model made as a limited edition and never reproduced since. While limited-edition Journe watches come around often, a new reference containing a new movement conceived for a specific run is something else altogether. Interestingly, the Octa Perpétuelle was the brand’s first-ever perpetual calendar, and perhaps the most elegant with tiny windows and a slim, long hand for the date. With the unique layout, it is clear that the Perpétuelle was based on the Octa annual calendar, but neither of the two were especially legible. As a result, the brand’s subsequent perpetual calendar models have an entirely different movement and a new dial designed expressly for legibility. Like other Tokyo Boutique editions, the Octa Perpétuelle has a titanium case with its moving parts such as the crown and pusher in 18k rose gold. And the the dial is finished in grey ruthenium matched with rose gold accents in the hands and print. A handsome look that’s neither overly classical nor sporty, the grey-and-rose-gold combination remains unique for the brand, being found only in commemorative boutique editions. Though it might not look like one with its spartan dial, this Streamliner is a perpetual calendar. At first glance it might appear to be a minimalist time-and-date wristwatch, but upon a closer examination it reveals smartly camouflaged indicators for the month and leap year. The Streamliner Perpetual Calendar ingeniously hides the less important indications, so that the calendar doesn’t get in the way of time telling or the overall clean design. That’s thanks to the smart movement within, which was originally conceived by Andreas Strehler and debuted in 2005 in the resurrected brand’s first model. As a truly unique perpetual calendar, the complication immediately put Moser on the map. The Streamliner perpetual is minimalist in typical Moser style, without even a logo on the dial. Though it’s an integrated-bracelet sports watch – with a case water resistant to 120 m – the Streamliner is low-key and elegant, which distinguishes it from most of its peers. Complete with box and papers, the Streamliner Perpetual Calendar has an estimate of HK$600,000-800,000, or about US$76,400-101,900. The low estimate is slightly above the retail price, reflecting the demand for such sports watches today.