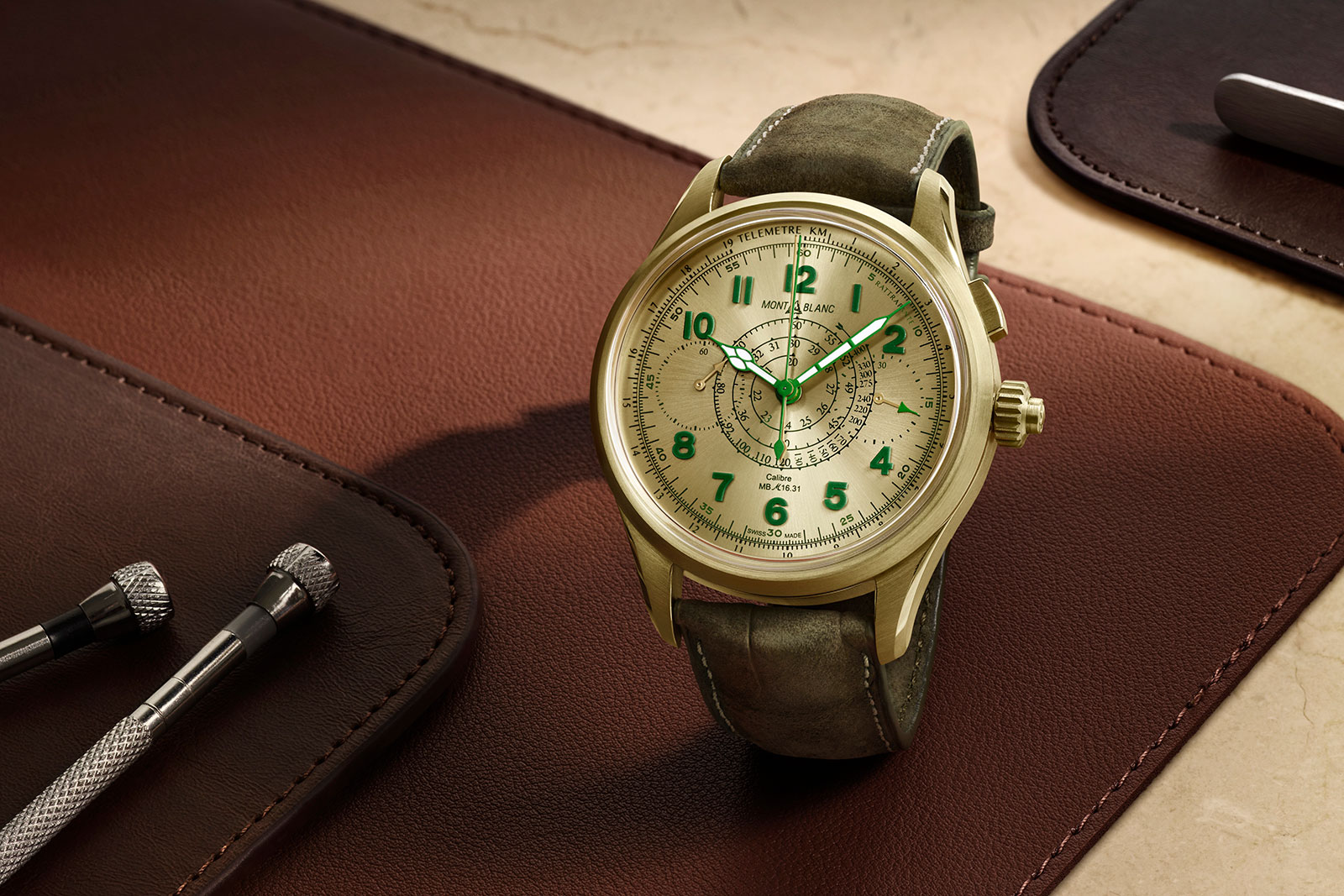 A watchmaker that was once a prominent maker of chronographs, Minerva is the star in Montblanc’s mountain. Since the pen-turned-watchmaker took over Minerva, it has launched several chronographs powered by Minerva calibres.

The flagship chronograph is arguably the mono-pusher split-second first launched in bronze two years ago. Montblanc has since rolled out several additional iterations, but in affordable alloys like titanium. Now the brand has finally unveiled the first precious-metal version, the 1858 Split Second Chronograph Limited Edition 18 in “Lime Gold”. 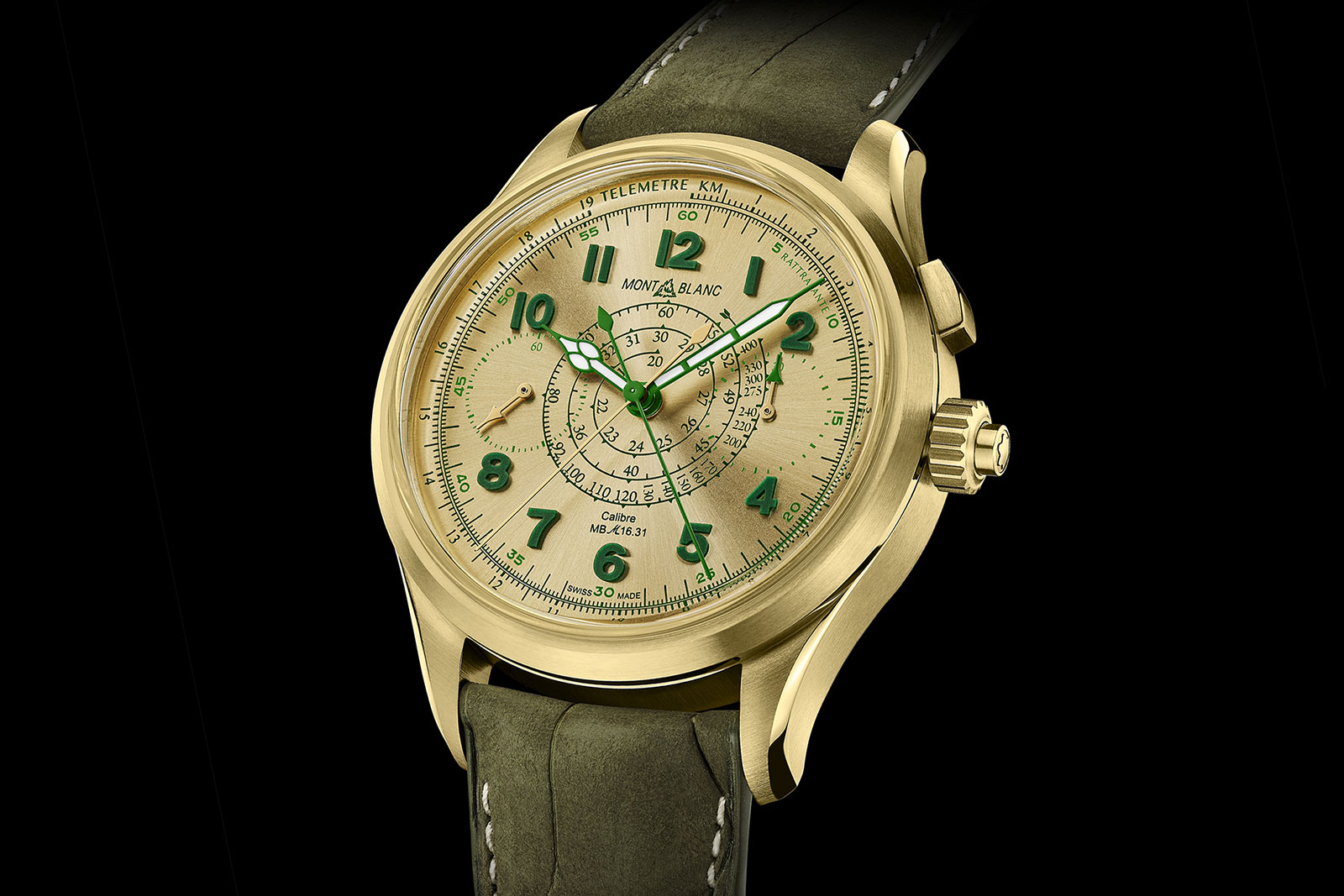 Two qualities often distinguish the great from the good in chronographs – a balanced, attractive dial combined with an intricate, good-looking movement – and all the better if the watch is priced well. The 1858 Split Second Chronograph is, by the two measures, a high performer.

Let’s begin with the aesthetics. While splendid looking movements with high technical content are rare, it’s even less common combined with good design on the front. That is why I appreciate the 1858 chronograph – the dial is well done, with the positions of the counters just right, giving it a rare finesse. And even though the dial is busy, the many elements are harmoniously arranged. Admittedly, the design is not new, it’s essentially a replica of early 20th century dials, but Montblanc reproduced it just right. 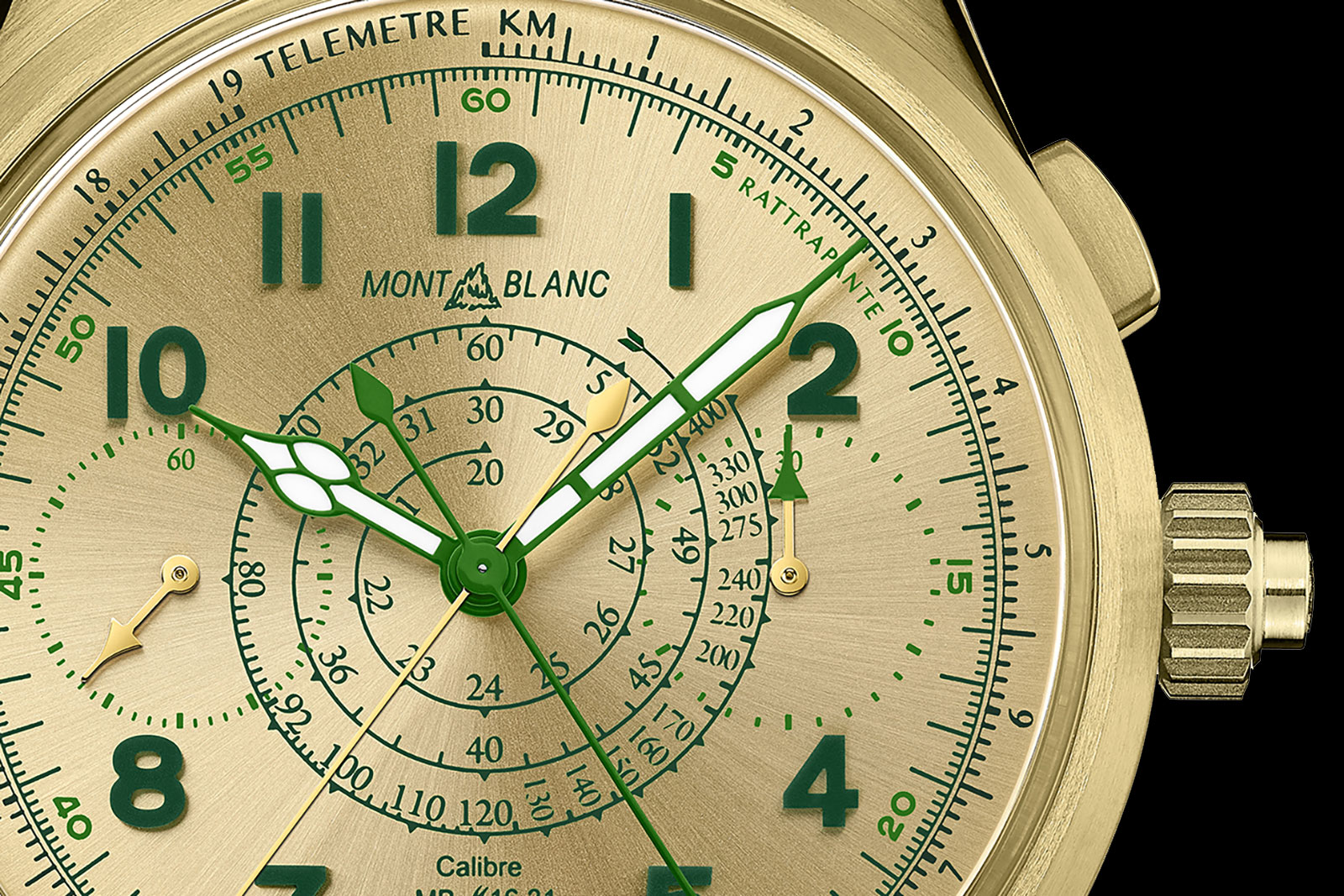 The counters at the sweet spot, not too far from the edge of the dial

The movement is similarly well done, perhaps even better in fact. It is a traditional hand-wind, lateral-clutch chronograph, meaning the interesting interactions between the levers and gears are fully revealed. More impressively, it incorporates a traditional split-seconds mechanism, which adds even more dimensionality to the view. And just like the other Minerva movements used by Montblanc, the finishing is old school and impressive. 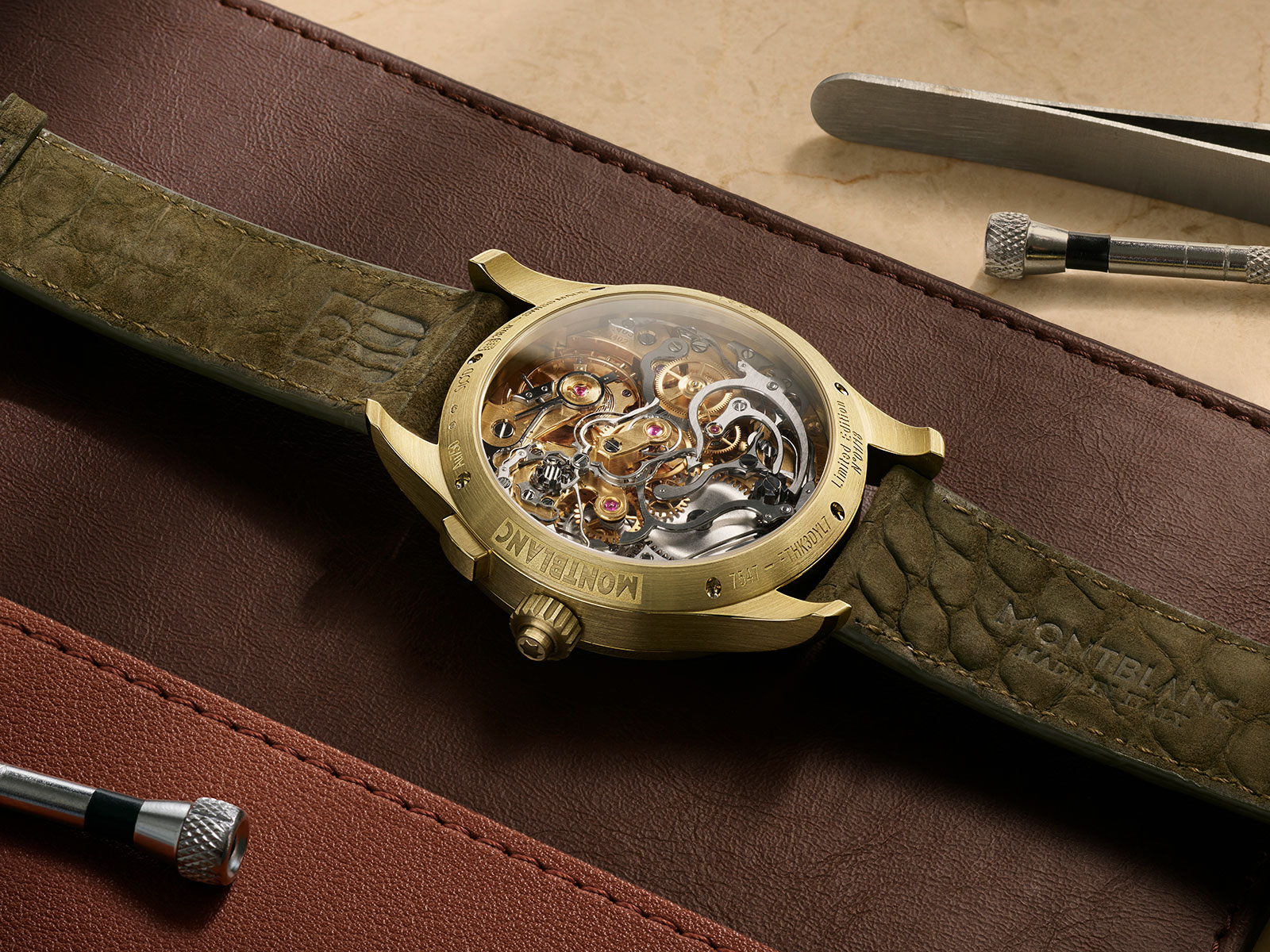 One downside of the watch is its size, 44 mm wide and also 15.2 mm thick. It isn’t a delicate, elegant watch, unlike many high-end split-seconds chronographs, but it excels at being what it is, a sporty watch with classic looks and a brilliant movement, making it a good choice for people who want a fine movement and substantial wrist presence.

Finally, the new 1858 chronograph is reasonably priced. At €49,500, it is at the affordable end of the spectrum as such things go. It does cost over 50% more than the bronze or titanium versions, but it is gold, which is fair enough.

The case is an 18k alloy Montblanc terms “Lime Gold”, which is more commonly known as green gold. A well known form of gold that is uncommon in watchmaking, green gold includes silver to give it a pale greenish tinge.

While the case metal is novel, most of the watch – namely the dial and movement – is modelled on Minerva watches of the 1930s. In fact, the cal. MB M16.31 is a modernised version of a pocket-watch movement, explaining its large diameter of 38.4 mm – making the movement alone bigger than many other chronograph wristwatches – as well as the evidently classical construction. 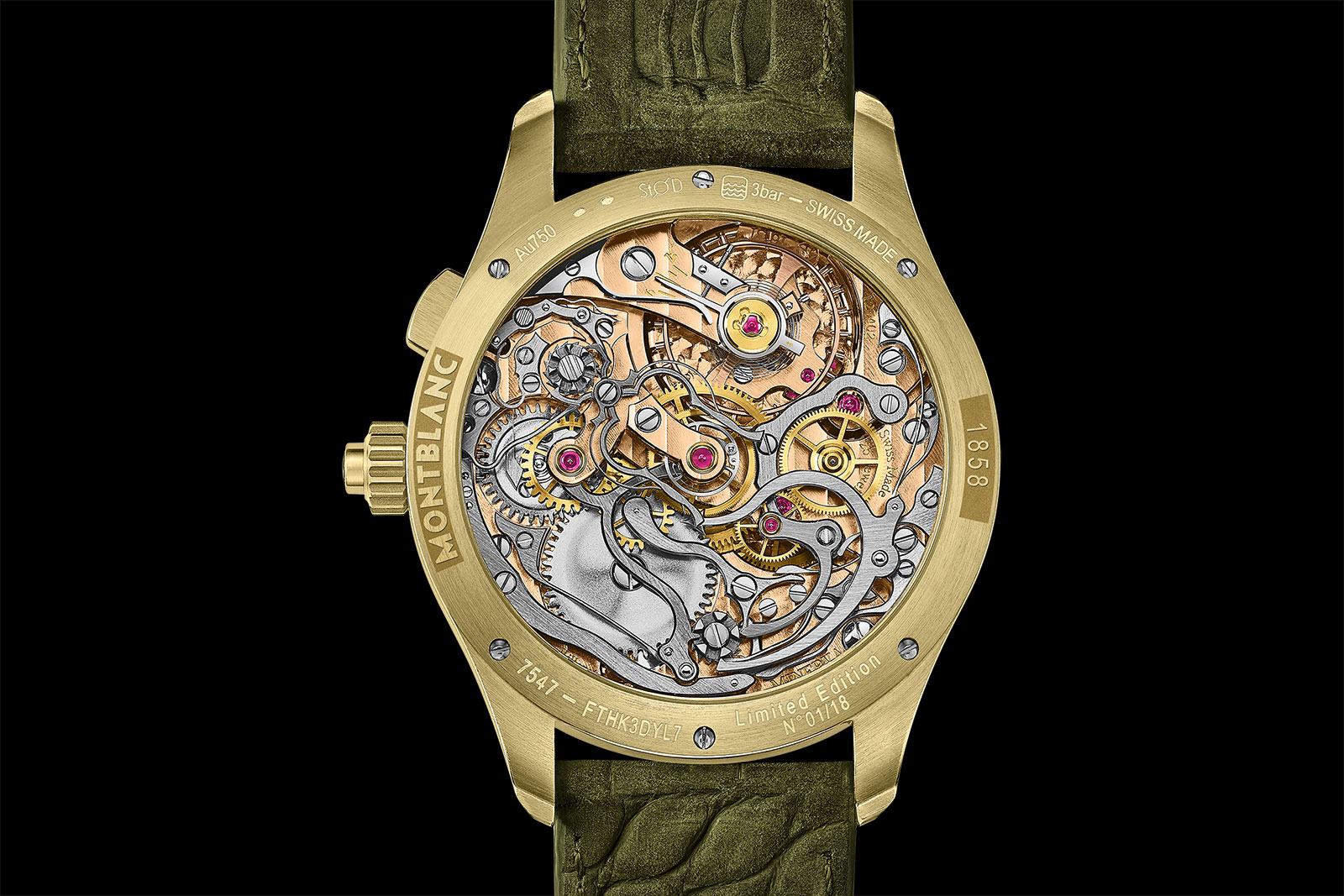 The movement’s appeal lies in its finishing. Most notable is the wide, hand-executed bevelling on the steel chronograph levers, which even include a few sharp, inward angles, exemplified by “devil’s tail”, a flourish that’s a nod to the Minerva arrowhead logo. Less obvious, but equally attractive are the polished teeth of the barrel ratchet wheel, a detail that is often overlooked, even in fine movements. 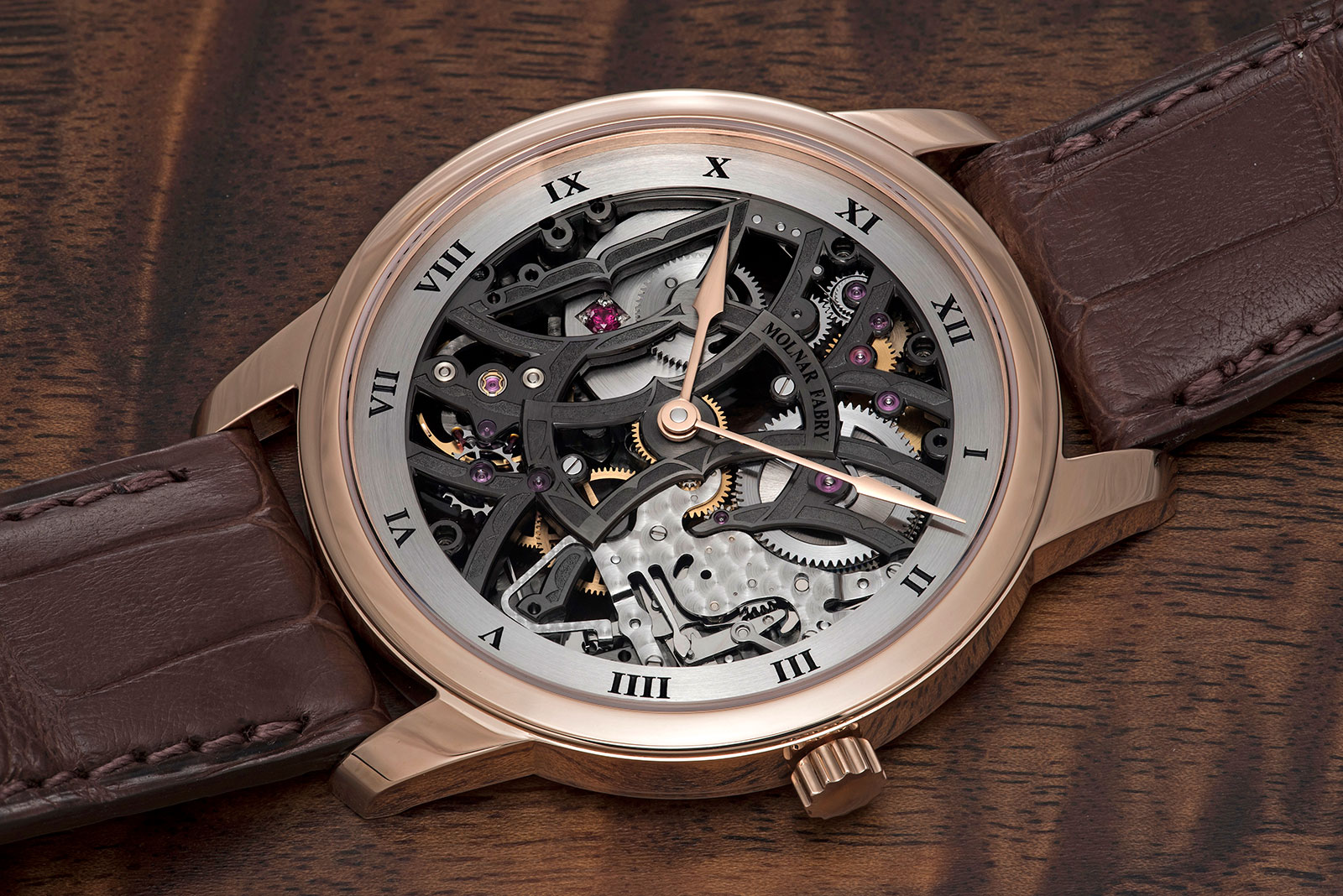 Based in Slovakia, Molnar Fabry is a pair of jewellers-turned-watchmakers who specialise in elaborate skeleton watches. The duo’s repertoire is diverse, ranging from a repurposed split-seconds pocket watch movement from the 1930s to an Omega Co-Axial cal. 8500 that looks nothing like the industrially-produced original.

The brand’s latest is unusual, its first ultra-thin dress watch. Commissioned by a client as most of its watches are, the Carpe Noctem (Latin for “seize the night”) is just 7.1 mm high, and powered by a reworked Vaucher VMF 5401. 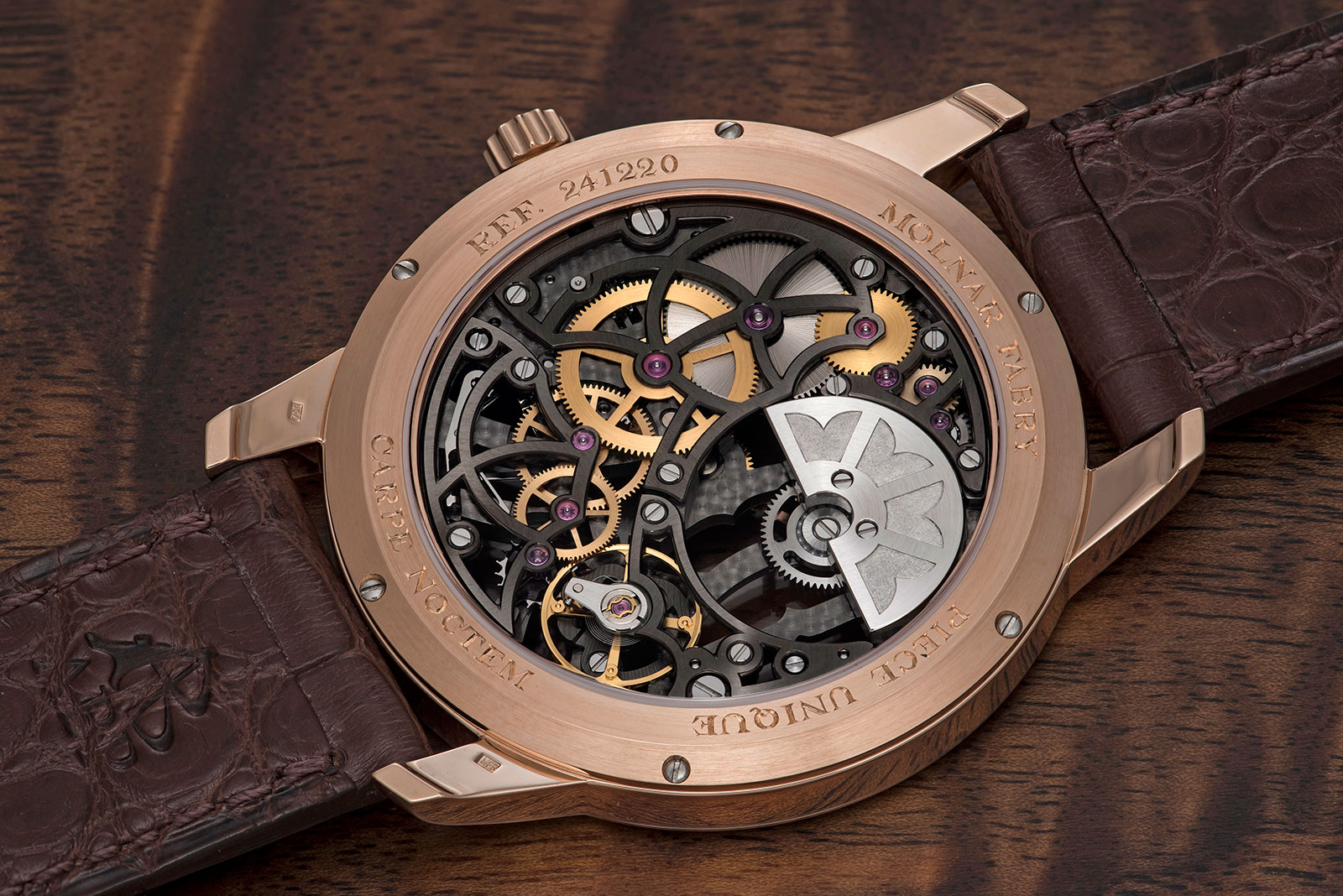 The VMF 5401 is a finely constructed movement – as all of Vaucher’s movements are – but rarely decorated in such an artisanal, intricate manner. Molnar Fabry’s revamp of the movement reveals much of its detail, while also showing off the brand’s skill in working with metal.

Because Molnar Fabry’s watches are all one-offs that are hand made, the aesthetic varies tremendously, depending also on the client’s taste. The Carpe Noctem is cleaner and sleeker than many of the brand’s other creations, but boasts just as much craftsmanship in the movement, which is a good thing. 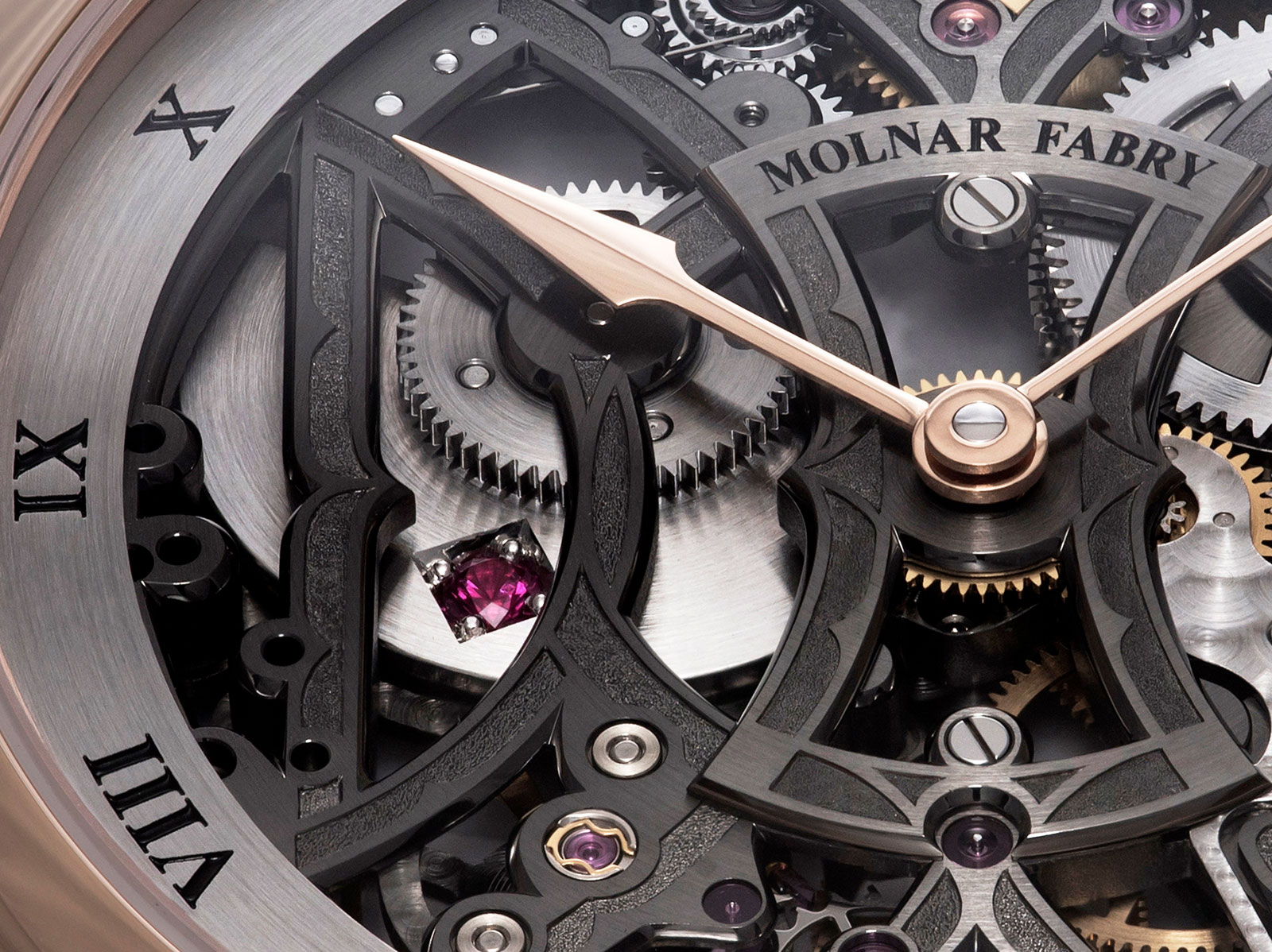 The chapter ring for the hours is steel finished with circular graining, with the Roman numerals being engraved and filled with black lacquer, while the hands are solid 18k pink gold

At €35,000, Carpe Noctem is priced like earlier, comparable watches by Molnar Fabry. It’s a substantial sum of money, but a reasonable ask considering that the watch is unique, while the movement is largely made and finished by hand. It’s a fraction of what a similar watch by an establishment brand would cost.

The case is 18k pink gold and 40 mm in diameter, while being just 7.1 mm high – a height made possible by the VMF 5401 inside. A movement also used by Hermes and niche independent makers like Kikuchi Nakagawa, the VMF 5401 was challenging to skeletonise because of the slimness of its components according to Michal Molnar, one of the brand’s founders. Mr Molnar adds that the calibre’s “quality is amazing”. 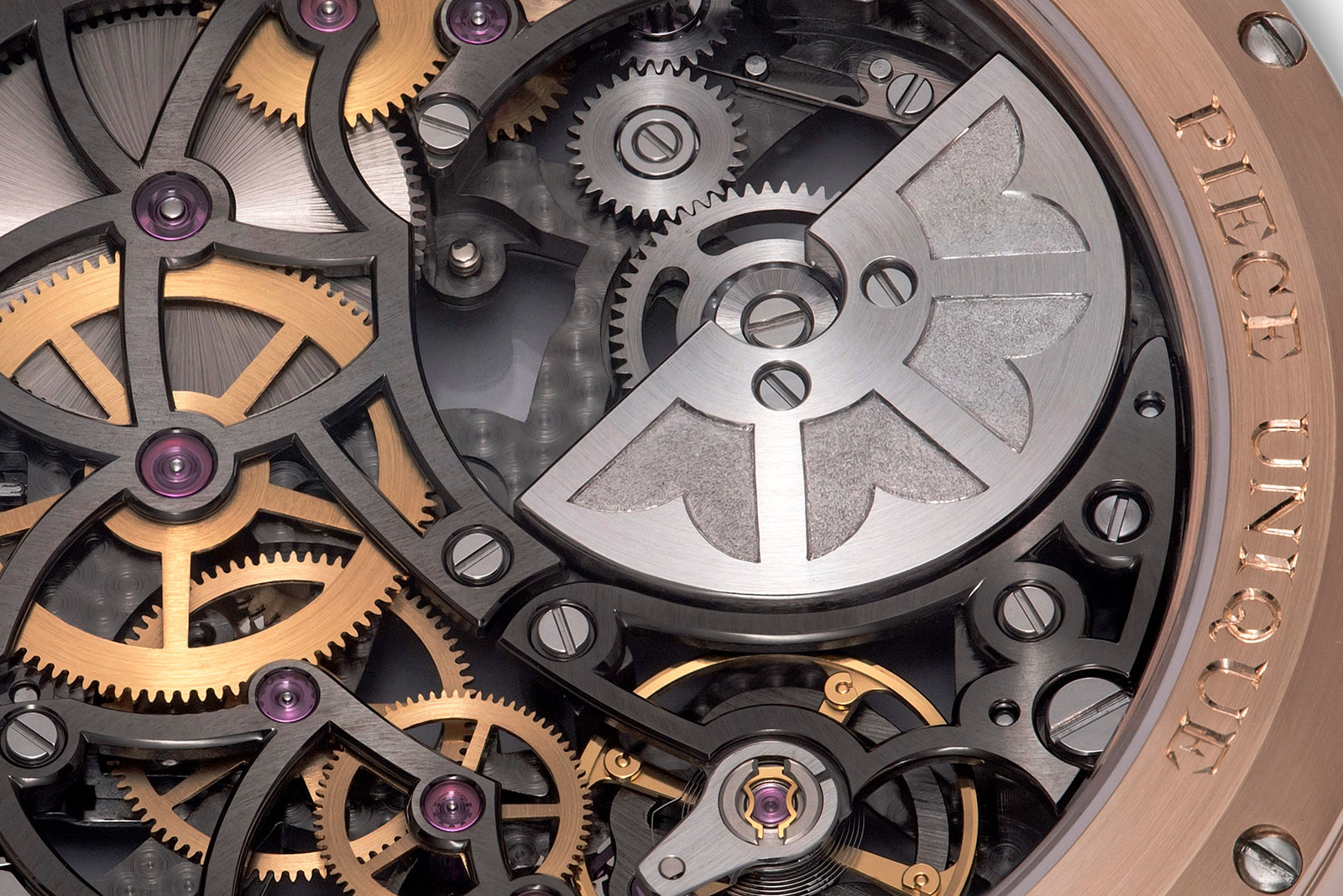 All of the skeletonisation on the VMF 5401 was done by hand – meaning a saw and file – as was the hand engraving and decoration. The wide bevels on all the bridges, for instance, are rounded and polished by hand – a feat given the thinness of the components.

And because the movement is so thin, an additional bridge had to be fabricated for the hour wheel in order to preserve the stability of the movement. 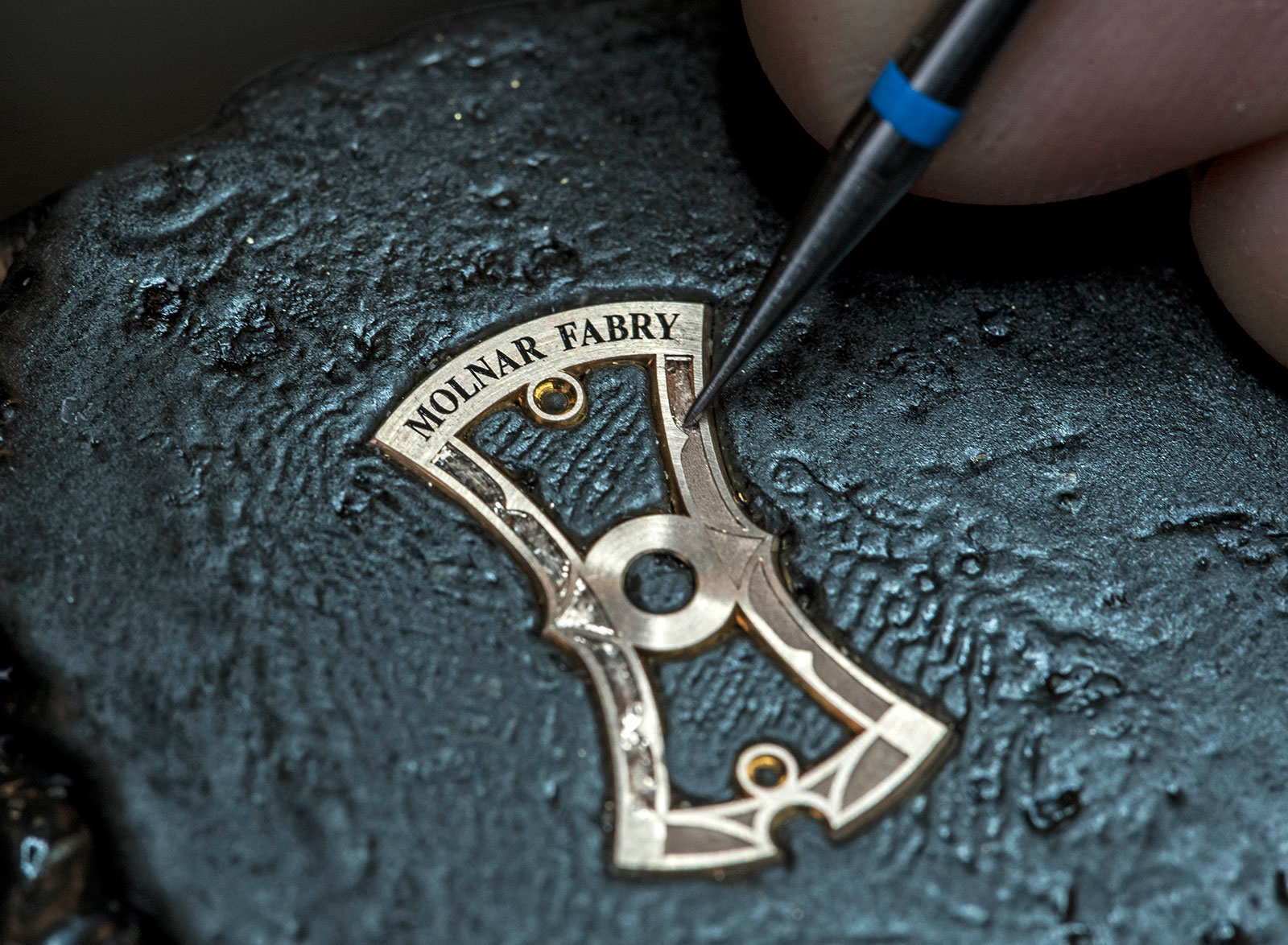 The bridge for the hour wheel

Besides the hour wheel bridge, Molnar Fabry also produced a new micro-rotor in 18k gold. Exactly reproducing the weight of the original – another major challenge according to Mr Molnar – the micro-rotor is engraved on the movement side and set with a brilliant-cut ruby on the dial side. As the rotor spins while the watch is on the wrist, the facets of the ruby catch the light, giving the dial a little sparkle. 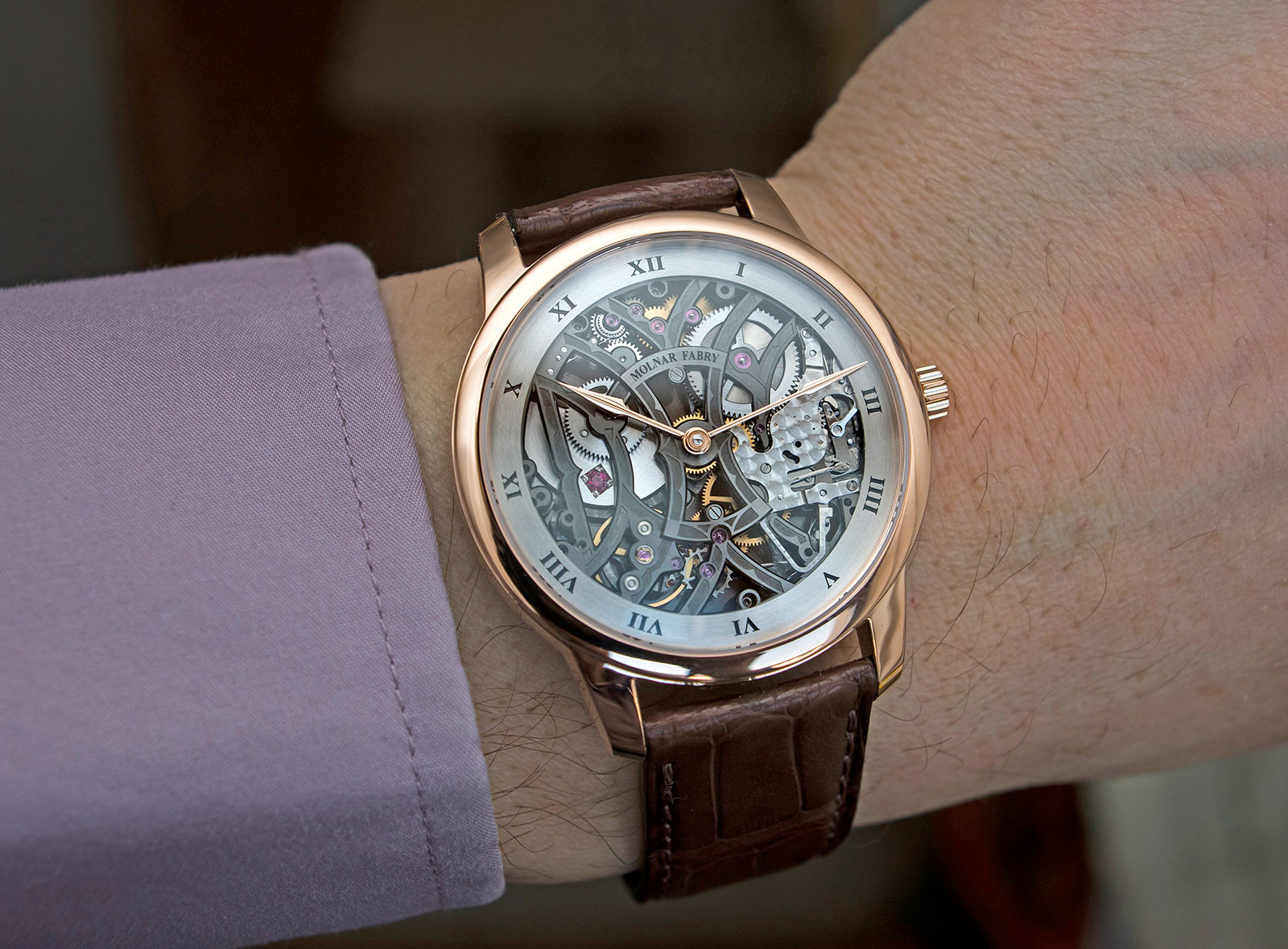 The ruby on the rotor is visible at nine o’clock

Classical crafts on a modern movement.