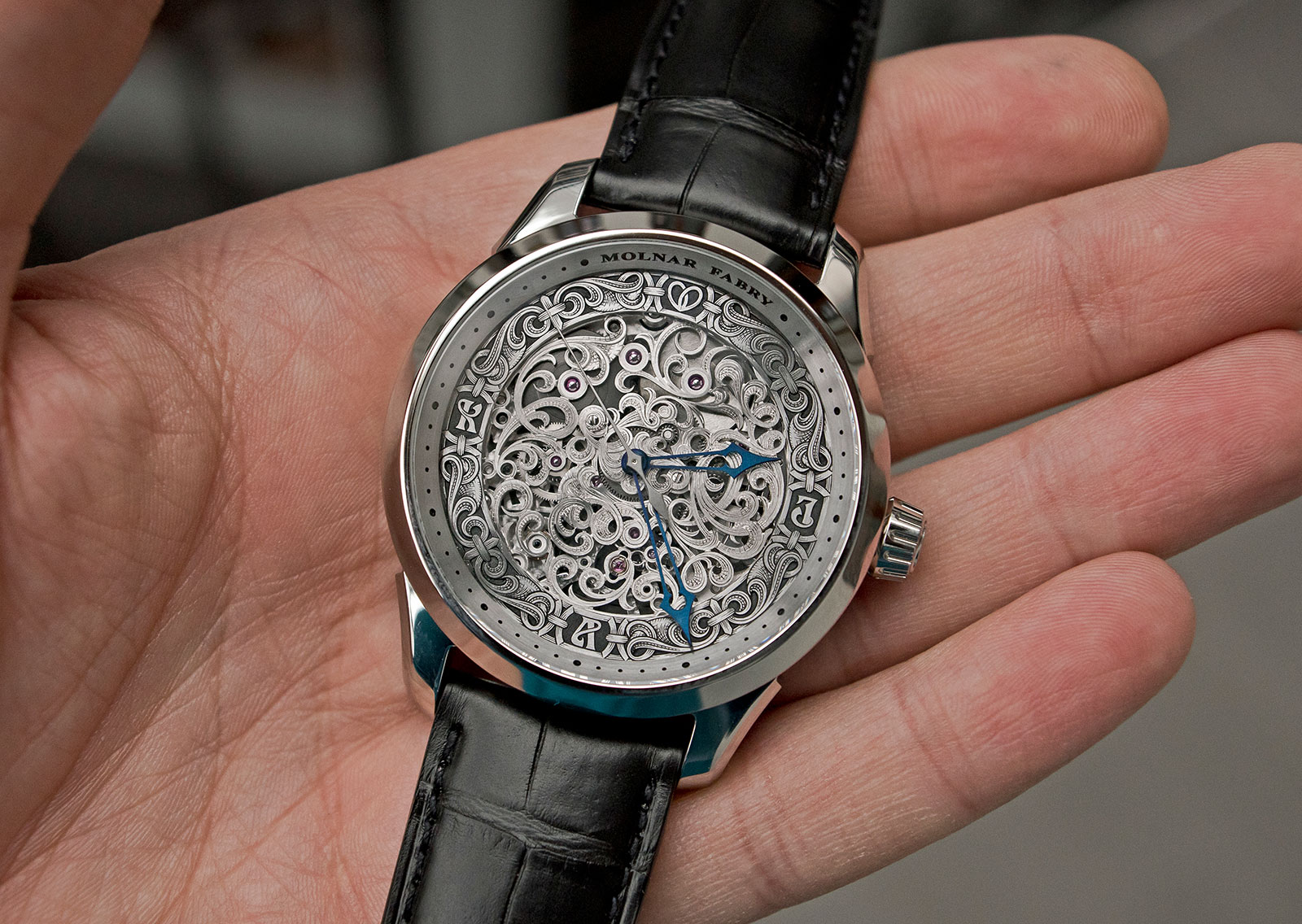 All of Molnar Fabry’s recent works have been either based on vintage movements, from repeaters to split-seconds chronographs, or the simple but effective ETA Unitas 6498. The Slovenian brand’s latest creation, however, originally started life as an Omega Co-Axial cal. 8500, a top of the line, contemporary movement.

Having trained as jewellers, Molnar Fabry’s founders rely heavily on elaborate embellishment like piercing, engraving and shading, all of which are liberally applied to the cal. 8500. The intricate decoration is a striking juxtaposition against the modern, mass produced movement. Introducing in 2007, the cal. 8500 is from Omega’s earlier generation of high-end movements (the latest is the Master Co-Axial cal. 8800). This particular movement came from a Seamaster, which no doubt sacrificed itself for a noble cause. It’s been skeletonised and engraved by hand, which means the bridges and plates were cut out with a saw, while the surfaces were engraved with a burin. Because the watch lacks a date function, which is found in the stock cal. 8500, the main plate had to be modified to remove the date mechanism. Another modification was the replacement of the Si14 silicon hairspring with a conventional, flat Nivarox spring. The free-sprung titanium balance wheel with a Nivarox hairspring, beside the balance bridge

Molnar Fabry also manufactured a second plate to sit over the base plate, so as to hide the hour wheel and keyless works. A hand-engraved chapter ring was also installed to form an approximate hour track. The base plate with the secondary plate on top The finished chapter ring, which has been filled with black lacquer to accentuate the engraving

The rest of the watch is largely as it was originally, retaining the signature red lacquer-filled engraving on the movement, as well as the black-coated screws and barrel. The external components were entirely produced by Molnar Fabry. That includes the 44mm stainless steel case, as well as the open-worked, blued steel hands. The Corculum was custom made for a client, though similar watches can be produced starting at €15,000.