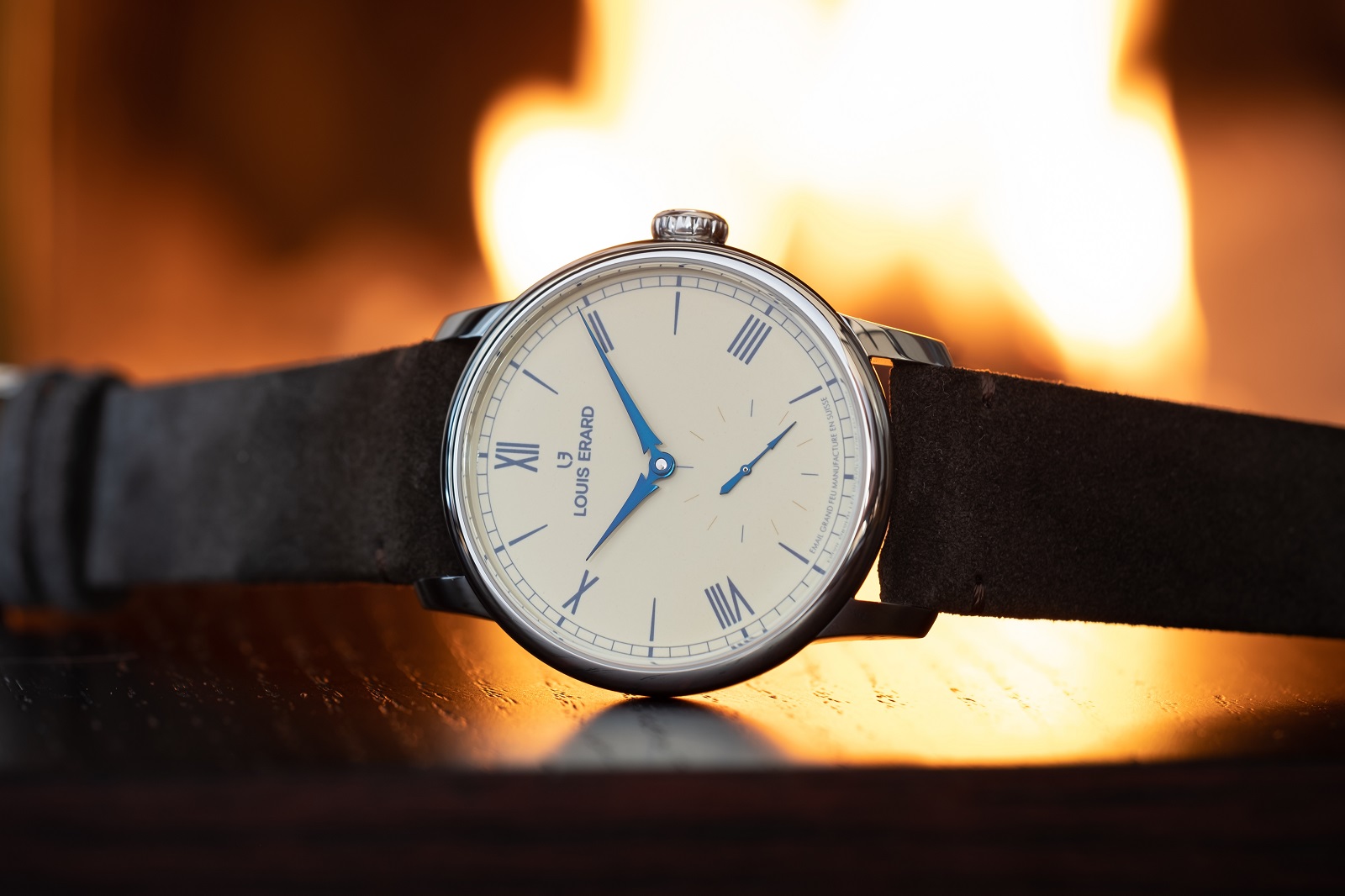 Best known recently for its collaborations with independent watchmakers – the Le Régulateur Vianney Halter sold out in a matter of hours – Louis Erard has been gaining recognition for making the style of high-end watchmaking affordable. Continuing with that focus, the brand has just announced the Excellence Email Grand Feu, a time-only wristwatch with a traditional enamel dial in a striking ivory hue.

The grand feu, or fired-in-an-oven, enamel dial is fairly difficult to manufacture, resulting in a rejection rate that’s often over half. As a result, such dials are usually only found in high-end watches. It’s Louis Erard’s first use of a fired enamel dial, but true to form, the brand has retained its usual pricing positioning with a retail price of under 4,000 Swiss francs. 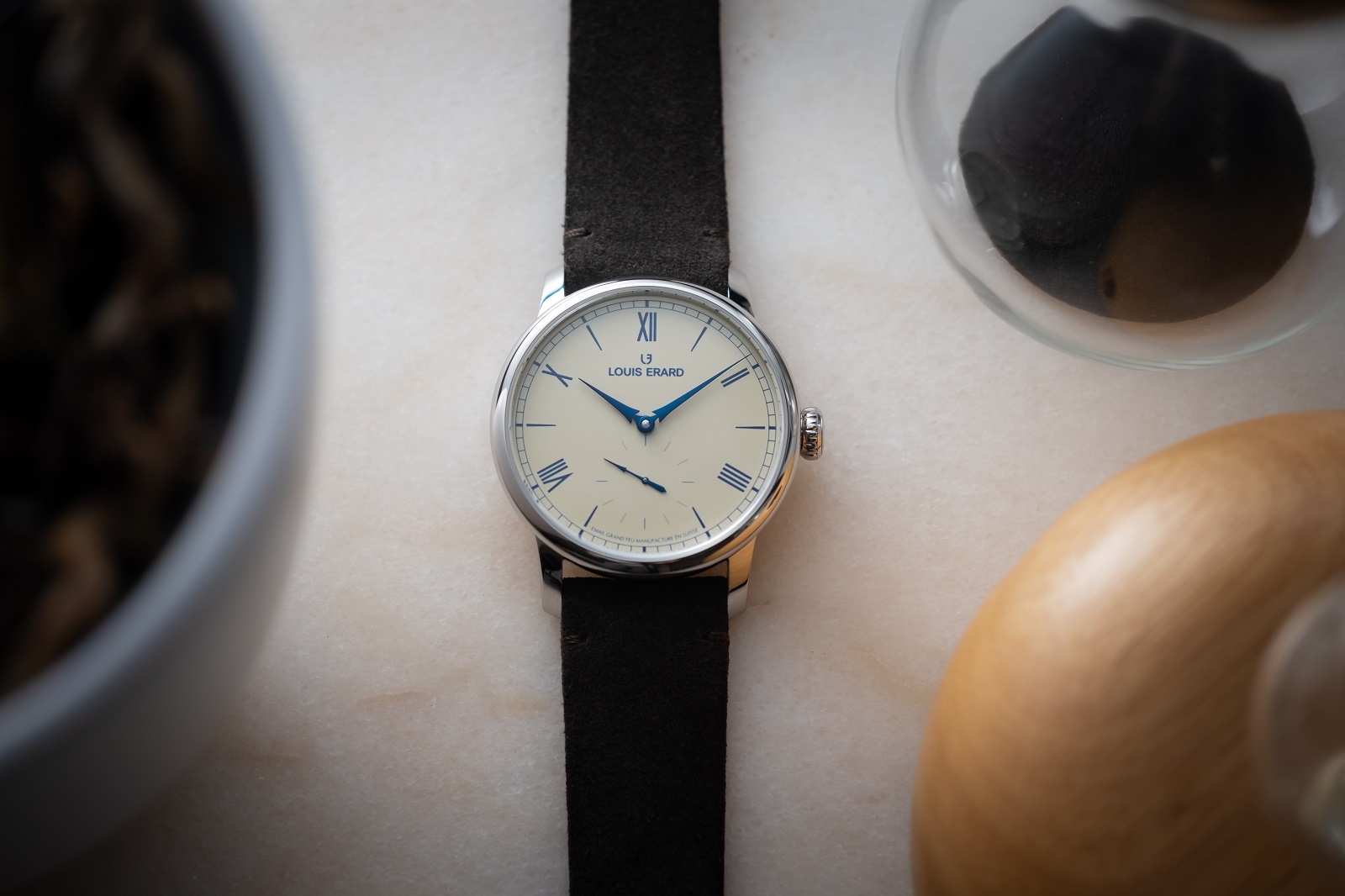 Given the frequent enthusiast gripe that watch prices (or values) border on the absurd, it would seem that true value propositions are hard to come by. There are a few exceptions – Tudor, Longines, and a few independents for instance – with Louis Erard increasingly being one of them.

The brand offers an honest product, often with one or two elements historically found only in haute horlogerie, for not so much money. The Excellence Email Grand Feu is exactly that. And the dial is particularly appealing in ivory, instead of the usual bright white that is the favoured colour for fired enamel. 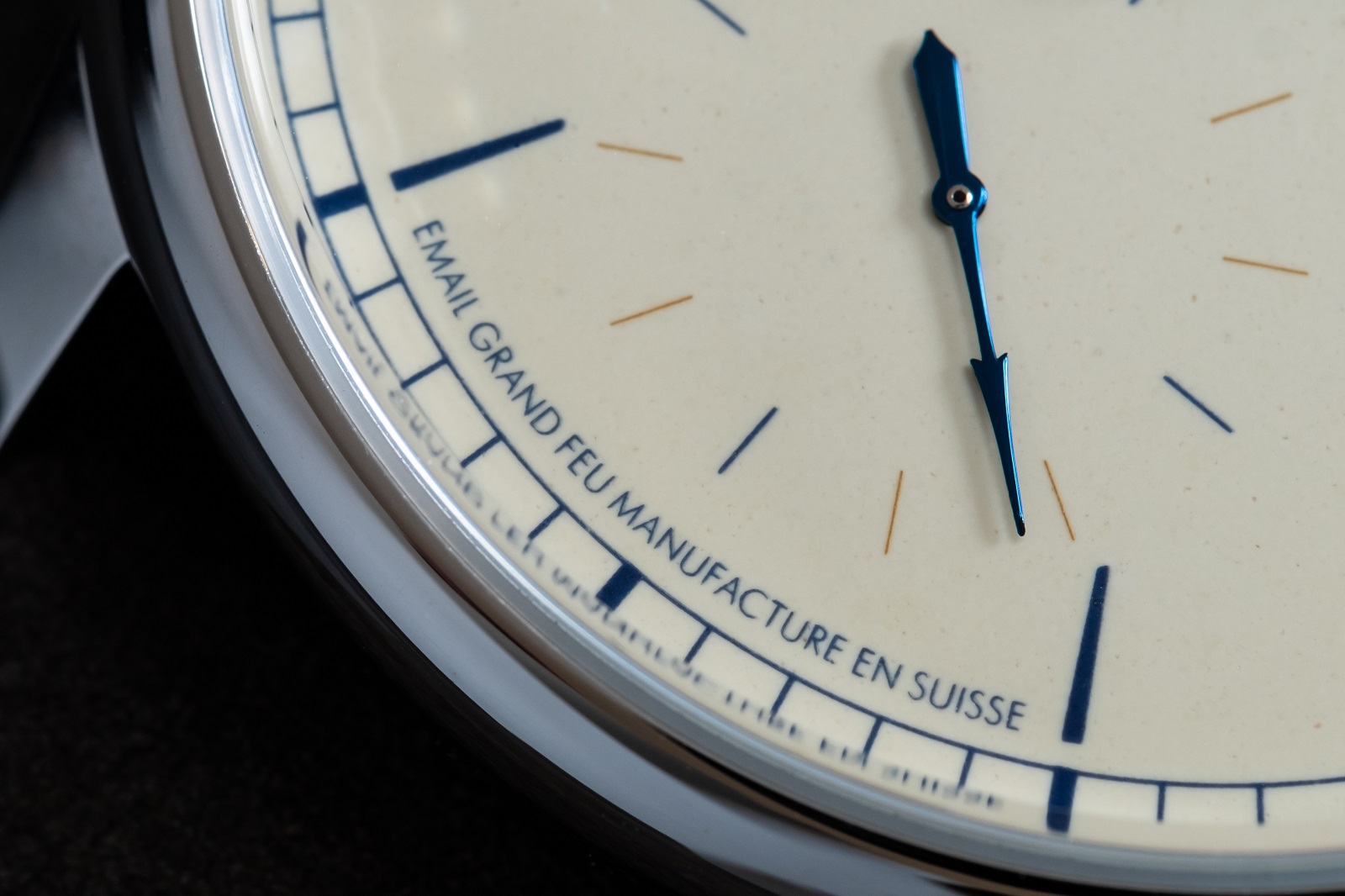 Notably, the dial is made by Donzé Cadrans, the well-known enamel dial maker owned by Ulysse Nardin. Historically one of the leading artisanal enamel workshops in Switzerland, Donzé now makes dials on a large scale, resulting in more affordable pricing while still retaining consistent quality. This contrasts with most other affordable watches that utilise enamel dials, like the Anordain Model 1 for example, which rely on niche dial makers.

Priced at 3,900 Swiss francs, or about US$4,200, the Excellence Email Grand Feu is strong value for a Swiss-made watch with a fired enamel dial. For comparison, the Ulysse Nardin Classico Manufacture, similarly equipped with a dial made by Donzé, costs twice as much at 8,800 Swiss francs. 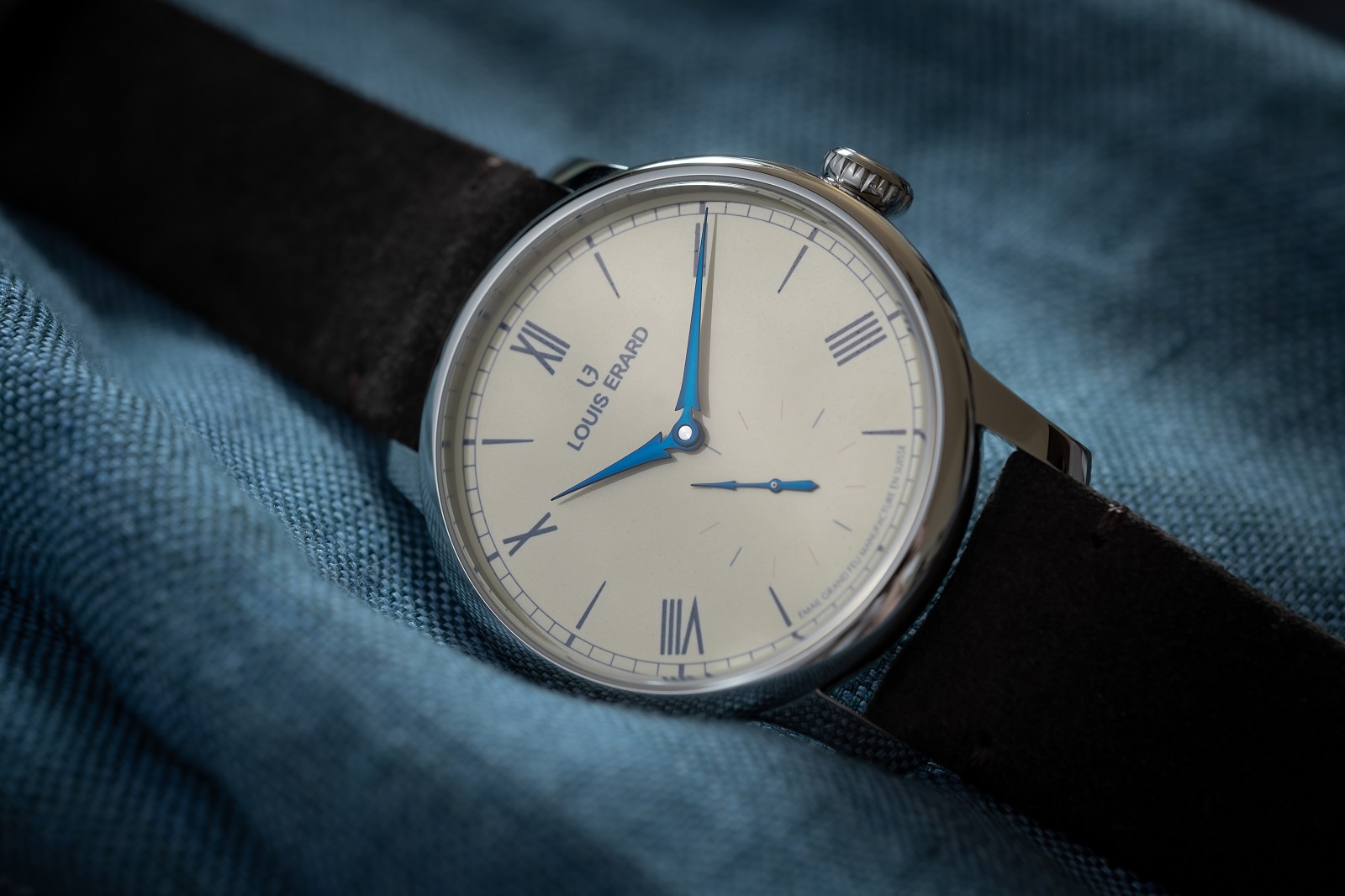 Donzé Cadrans is one of the leading suppliers of fired enamel dials to the watch industry, despite still largely relying on traditional methods to produce its dials.

Starting with a copper blank, the dial is first coated with several layers of enamel powder and baked in a small oven at over 800°C, melting the enamel powder and fusing it to the dial. The firing process results in cracks or warping for some dials, which are then discarded. The unblemished dials are printed with liquid enamel to create the markings, which requires another trip to the oven. The result is a beautiful ivory dial that has the inexplicable gloss and depth typical of enamel. And the gently spotted surface – tiny imperfections that are usually inevitable with fired enamel – evokes the patina found on some vintage timepiece, a faintly aged look goes well with the traditional style of the enamel dial.

The dial features a sub-seconds at six, along with a railway minute track, as well as the brand’s signature “fir tree” hands rendered in blued steel, all of which bolster the classical look. Despite its traditional style, the Excellence Email Grand Feu has a contemporary, largish diameter of 42 mm. It’s just over 12 mm high, which is a little thick but not overly so. The style and size make it a good modern-day dress watch. The Excellence Email Grand Feu is powered by the Sellita SW261-1. Also found in the Excellence Petite Second, the SW261-1 is the small seconds variation of the SW200-1, which in turn is a clone of the eminently reliable ETA 2824-2.

The movement has an average power reserve of 38 hours, which is short by modern standards but explained by the movement’s origins – the ETA 2824 is several decades old. Unfortunately, the movement is sparsely decorated – a trade-off inevitable at this price. 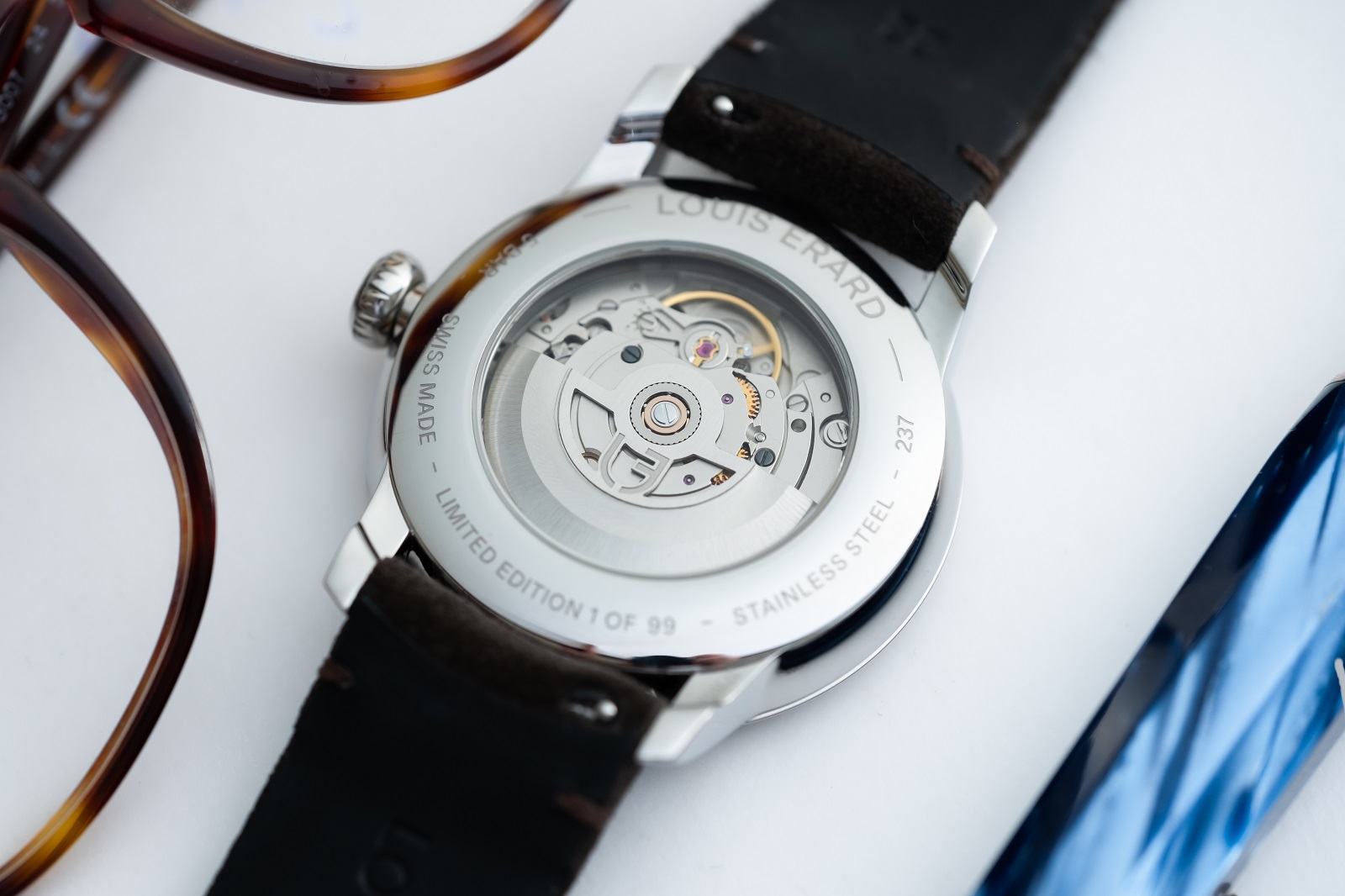 Having introduced the ultra-advanced quartz Caliber 0100 in 2019, Citizen is now turning to mechanical movements. Making its debut in the flagship The Citizen collection, the Caliber 0200 is a newly-developed automatic with all the technical features expected of a high-end modern movement, along with more elaborate decoration thanks to the input of Swiss movement specialist La Joux-Perret.

Citizen’s first new mechanical since 2010, the Caliber 0200 elevates its mechanical watchmaking to a new level in both construction and aesthetics. Similarly, the first wristwatch equipped with the Caliber 0200 boasts a more sophisticated degree of finishing on its complex case and integrated bracelet. Going by the images, the Calibre 0200-equipped The Citizen is an impressive watch. And going by Citizen’s other high-end watches, this will almost surely look as good in real life as it does in photos.

Measuring an elegant 40 mm by 10.9 mm, the case has complex surfaces and impeccable finishing, and also a distinctive look. Though some of the design elements do bring to mind other watches, it is original enough, which is a feat given the proliferation of integrated-bracelet designs today.

But the highlight is the movement, which is perhaps best described as a high-end workhorse calibre. The construction and specs tick all the right boxes, and so does the finishing, which is superior to many watches – Swiss and Japanese – in the same price range.

The projected retail price is US$6,000, which is fair, and probably very, very good for what it is. In fact, it might even be great value given the quality of the case and movement, though that can only be truly determined once the watch is examined in the metal. A relatively large, robustly-constructed movement, the Caliber 0200 has a longish, 60-hour power reserve. It’s made entirely in Japan – from manufacturing of parts to finishing to assembly – and finally tested in a stringent 17-day trial that includes six positions and three temperatures, where the average daily deviation has to remain within -3 and +5 seconds. Passing the trial results in the “Certificate of Compliance” that accompanies each watch.

The brand’s first new mechanical movement in a decade, the Caliber 0200 was possible in part thanks to Citizen’s acquisition of La Joux-Perret in 2012. A movement specialist based in La Chaux-de-Fonds, La Joux-Perret is historically known for its chronographs, particularly calibres based on the Valjoux 7750. According to Citizen, the Caliber 0200 was constructed in house, but the movement decoration was modelled on the work done at La Joux-Perret, a “fusion of Japanese and Swiss watchmaking cultures”.

Most notable is the linear brushed finishing on the bridges, which are all outlined with wide, diamond-cut bevels – a detail often found in contemporary mid- to high-end Swiss movements. Even the jewels and screws sit in bevelled countersinks, while the screw heads and slots are chamfered.

Beyond the finishing, the movement also boasts several features that are a first for Citizen. Most obvious is the free-sprung balance wheel with four spokes each carrying on regulating weight, which promises better isochronism and more stable timekeeping even when subject to shock.

The Caliber 0200 also features an escape wheel and pallet fork produced with LIGA (and most probably in nickel-phosporous) a lithography technique that results parts of exceptional precision and consistency.

In contrast to the more conservative designs that characterised The Citizen collection in the past, the new watch equipped with th Calibre 0200 is a distinct, modern design.

Described by Citizen as “lugless”, the case is clean, angular, and sharply finished. It is characterised by wide, flat planes in alternating brushed and polished finishes. Though the styling is fresh, the size is classical – 40 mm by 10.9 mm – and makes for a compact profile on the wrist. 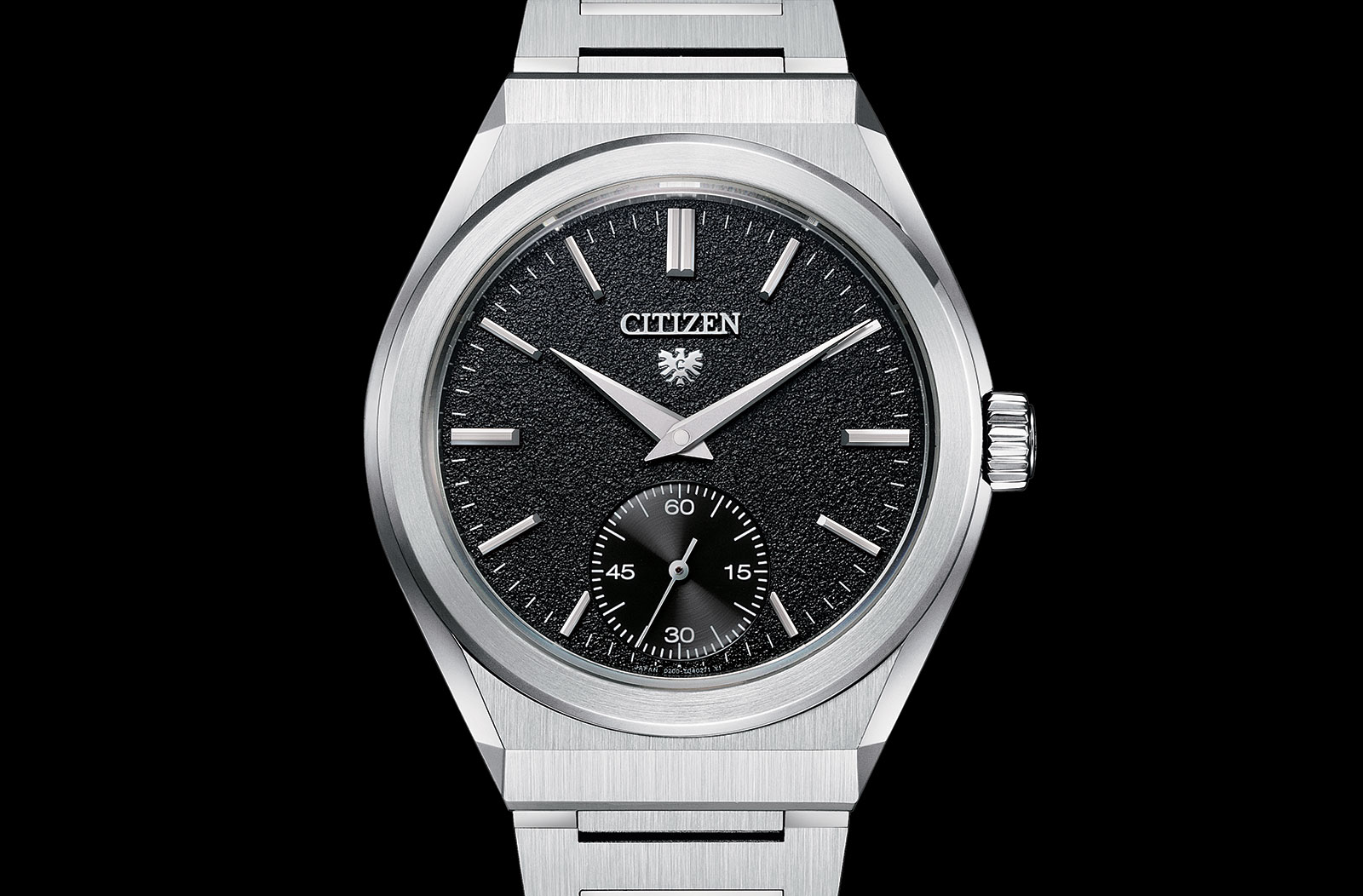 And the unusual dial – covered in what Citizen labels “sand-ripple pattern” – is the result of electroforming, where metal is chemically deposited on a surface.

Below 12 o’clock sits the applied Citizen logo, as well as the “Eagle Mark” emblem of The Citizen line, which is electroformed as part of the dial surface. The dauphine-shaped hands are diamond cut, resulting in razor-sharp edges and mirror-finished surfaces

Brought to you in partnership with Citizen.