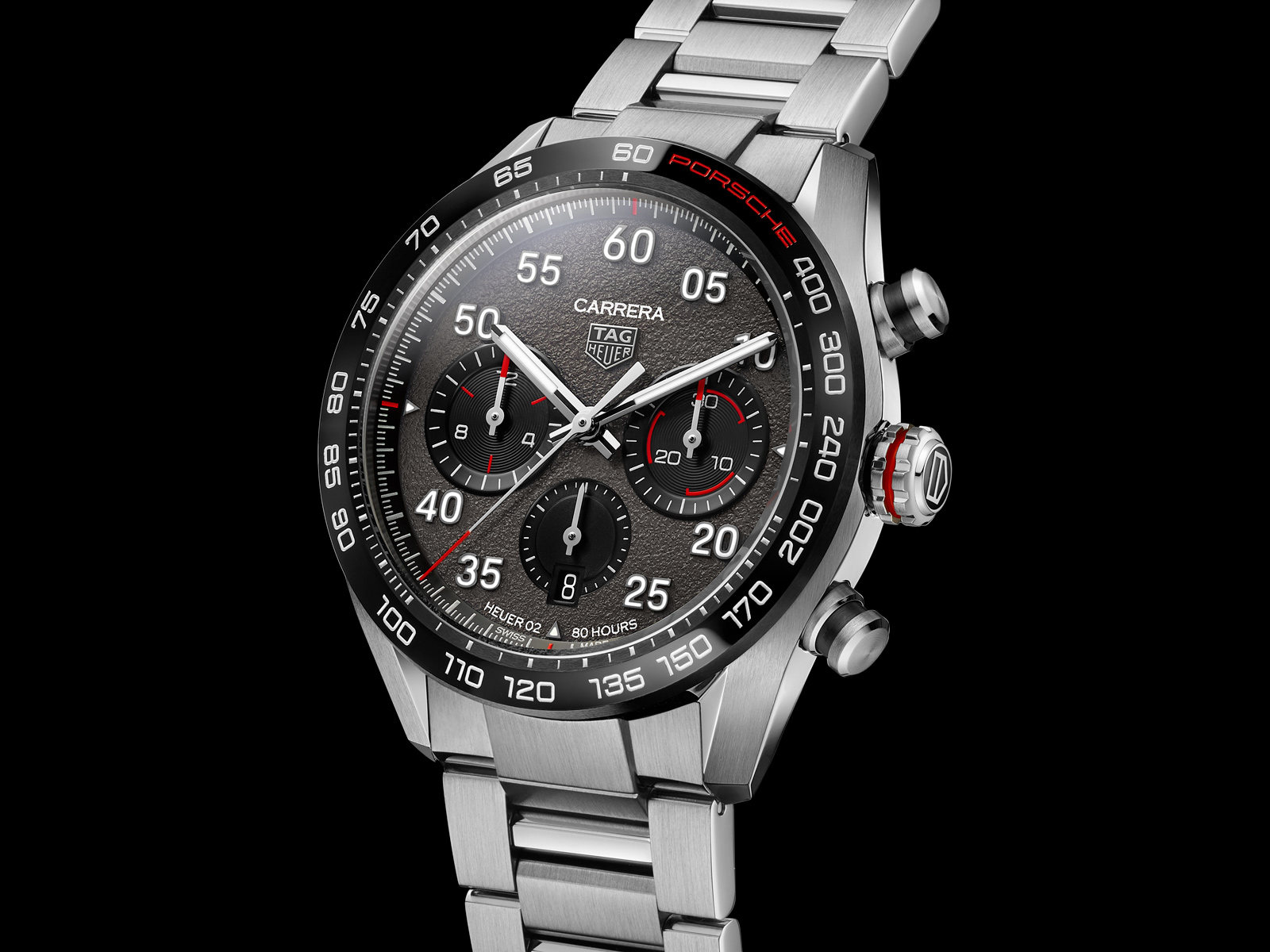 Collaborations between watchmakers and automobiles manufactures are common, but unsurprising given the focus on engineering and styling shared by the two industries. Despite the obvious synergies, the watch-and-car tie ups of recent years have rarely enjoyed unbridled success.

Now TAG Heuer is seeking to upend the trend with a partnership with Porsche, the German marque whose 911 is the longest-lived sports car in history. The partnership is being inaugurated with the Carrera Porsche Chronograph Special Edition Calibre Heuer 02 – a thoroughly apt product given that the flagship product of each brand shares the same name inspired by the Carrera Panamericana of the 1950s. 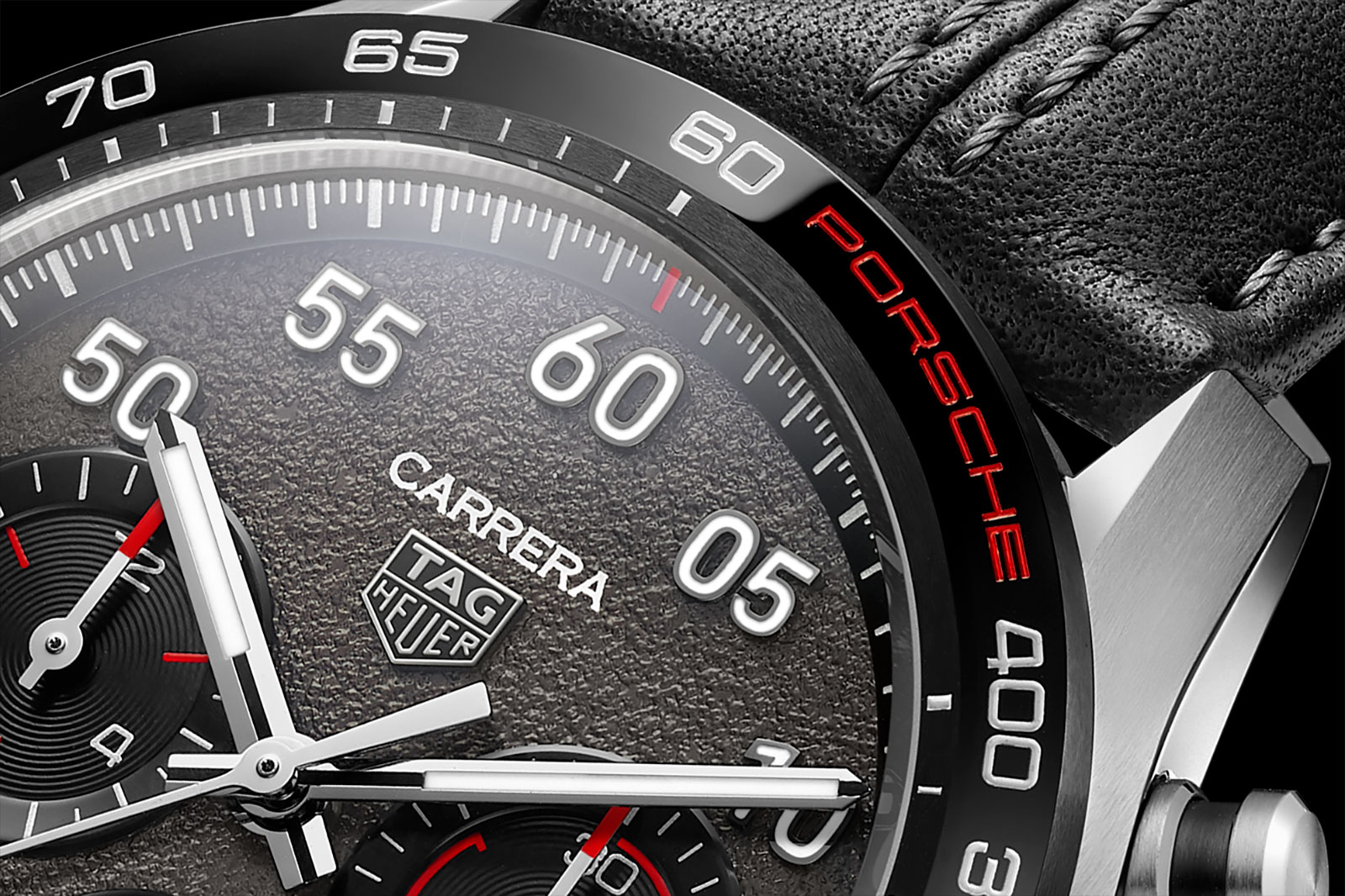 The inaugural watch of the partnership has modest ambitions. On the surface, it appears to be a gentle facelift of the Carrera Sport Chronograph introduced last year. The case and movement remain the same, but the design features a few subtle elements drawn from Porsche’s racing pedigree. The execution is smart without being over-the-top, avoiding the pitfall of excess automotive elements that accompany many automotive collaborations.

At US$6,050 on a bracelet, the Carrera Porsche Chronograph is priced at a small and reasonable premium of about 5% over the standard model. Compared with watches resulting from earlier automotive partnerships, the Carrera Porsche Chronograph is affordable, and remains a good value proposition, offering a little extra for Porsche and sports car enthusiasts. 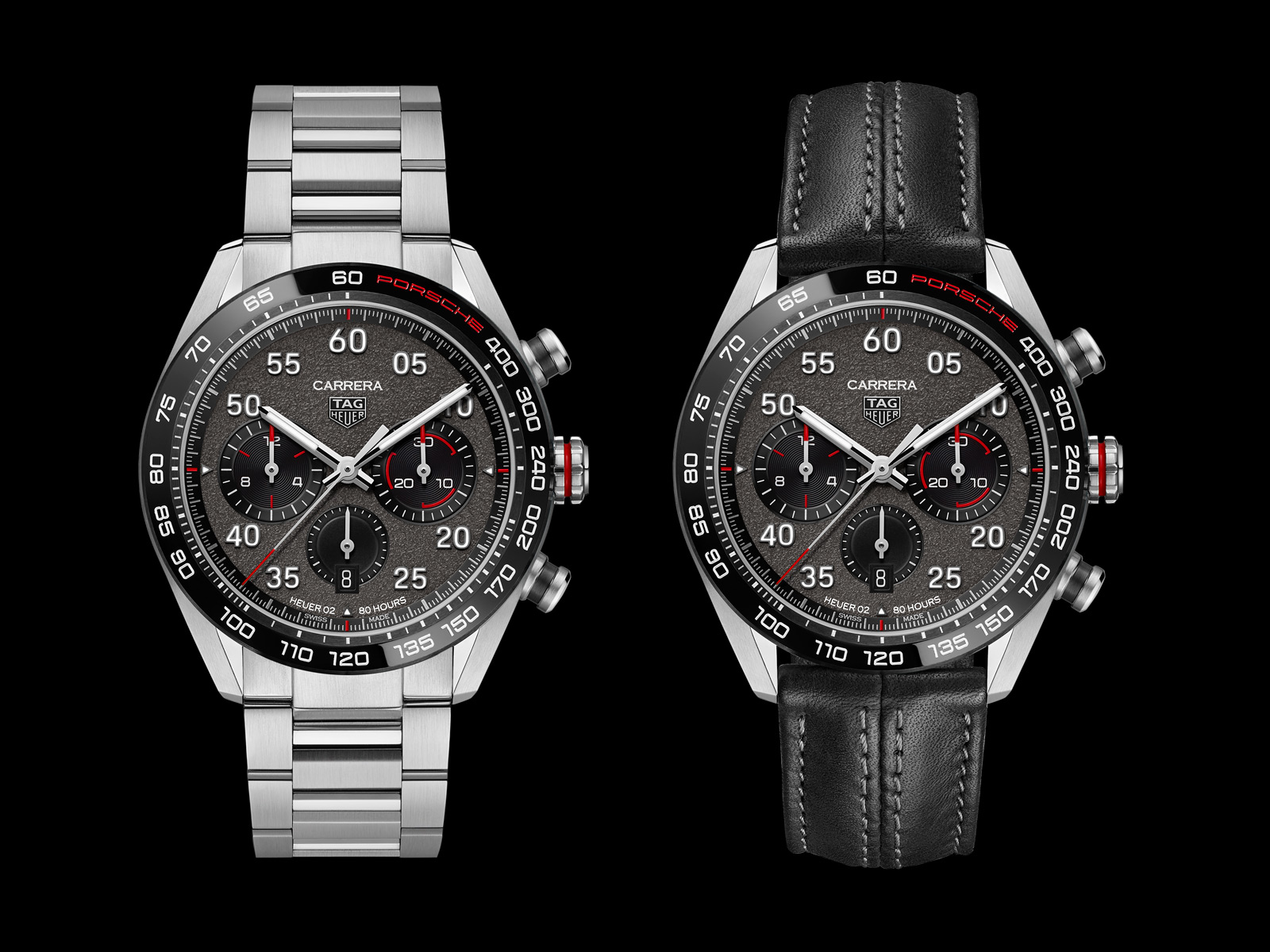 Watchmakers have long worked with automakers, but typically with little or short-lived success. Except for the decade-long Girard-Perregaux and Ferrari relationship, the list of defunct collaborations is long: Zenith and Range Rover, Parmigiani and Bugatti, Hublot and Ferrari, and even TAG Heuer with McLaren not too long ago. Of the notable partnerships, only Roger Dubuis and Lamborghini are still paired up.

But, if there are two brands that can make it work, it’s TAG Heuer and Porsche. The brands each possess a storied history in automotive racing. Porsche makes one of history’s most legendary sports cars, while all of TAG Heuer’s best-known watch models having auto-racing roots – Autavia, Carrera, and Monaco.

And their histories have occasionally intersected. Jo Siffert, the 1960s racing champion famous for wearing a Heuer Autavia – TAG Heuer recently introduced a watch in his honour – notched up most of his victories in Porsches. And actor Steve McQueen wore a Monaco in the 1971 film Le Mans while racing a Porsche 917. 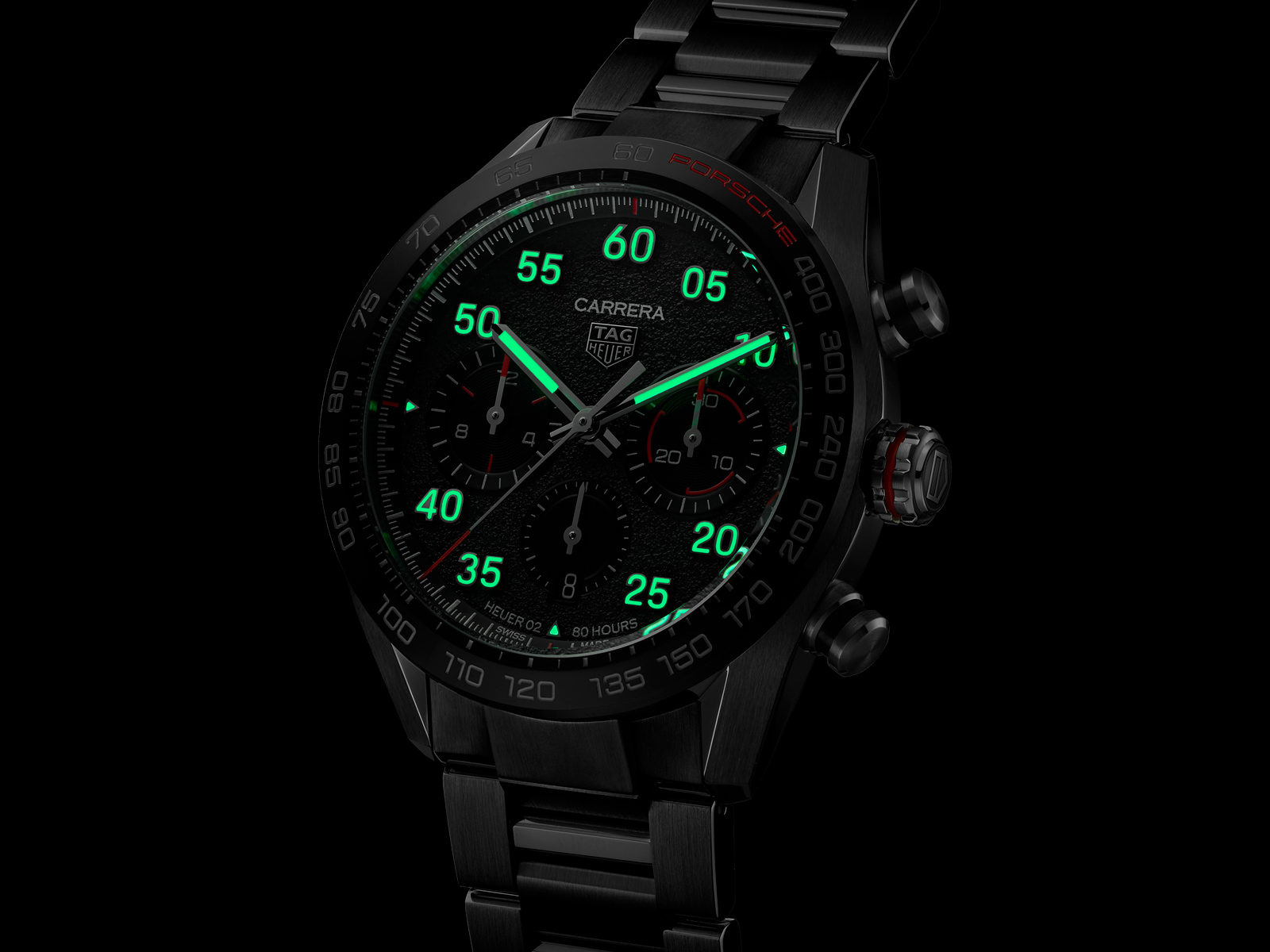 Beyond the shared history in motorsport, both Porsche and TAG Heuer are similar in being global luxury-goods brands that are still family-controlled. Porsche is owned by Volkswagen, which is controlled by the Porsche family, while TAG Heuer’s parent LVMH is controlled by the Bernard Arnault, whose son Frédéric is chief executive of TAG Heuer. This might give them a longer-term perspective that will be useful in building a shared brand.

It’s worth noting that the TAG Heuer-Porsche partnership watches are distinct from those of Porsche Design, which is a design studio owned by a holding company controlled by the Porsche family, but separate from the Porsche car-making enterprise. 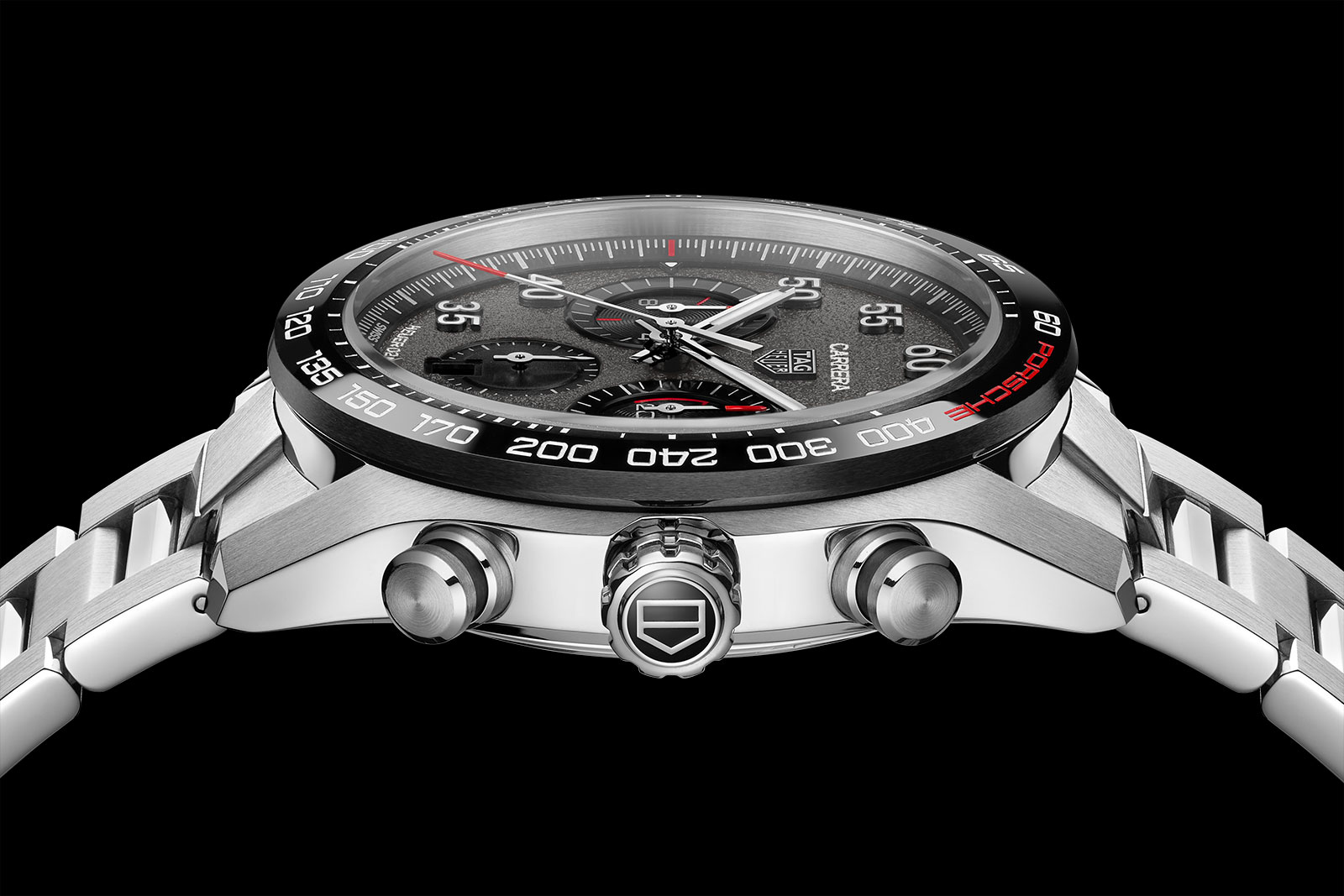 The case is identical to that on the standard Carrera chronograph, so it’s 44 mm in diameter with the model’s characteristic, facetted lugs.

While the dial is modelled on a speedometer, the automotive content of the design is restrained. The large Arabic numerals marking five-minute segments are modelled on the typography used on the instruments in Porsche dashboards. More unusually, the granular finish of the dial was conceived to be reminiscent of asphalt.

Engraved on the ceramic bezel, the Porsche brand name is the only overt reference to the car maker. The designers have smartly avoided applying the red, black, and gold emblem of the car maker on the watch. 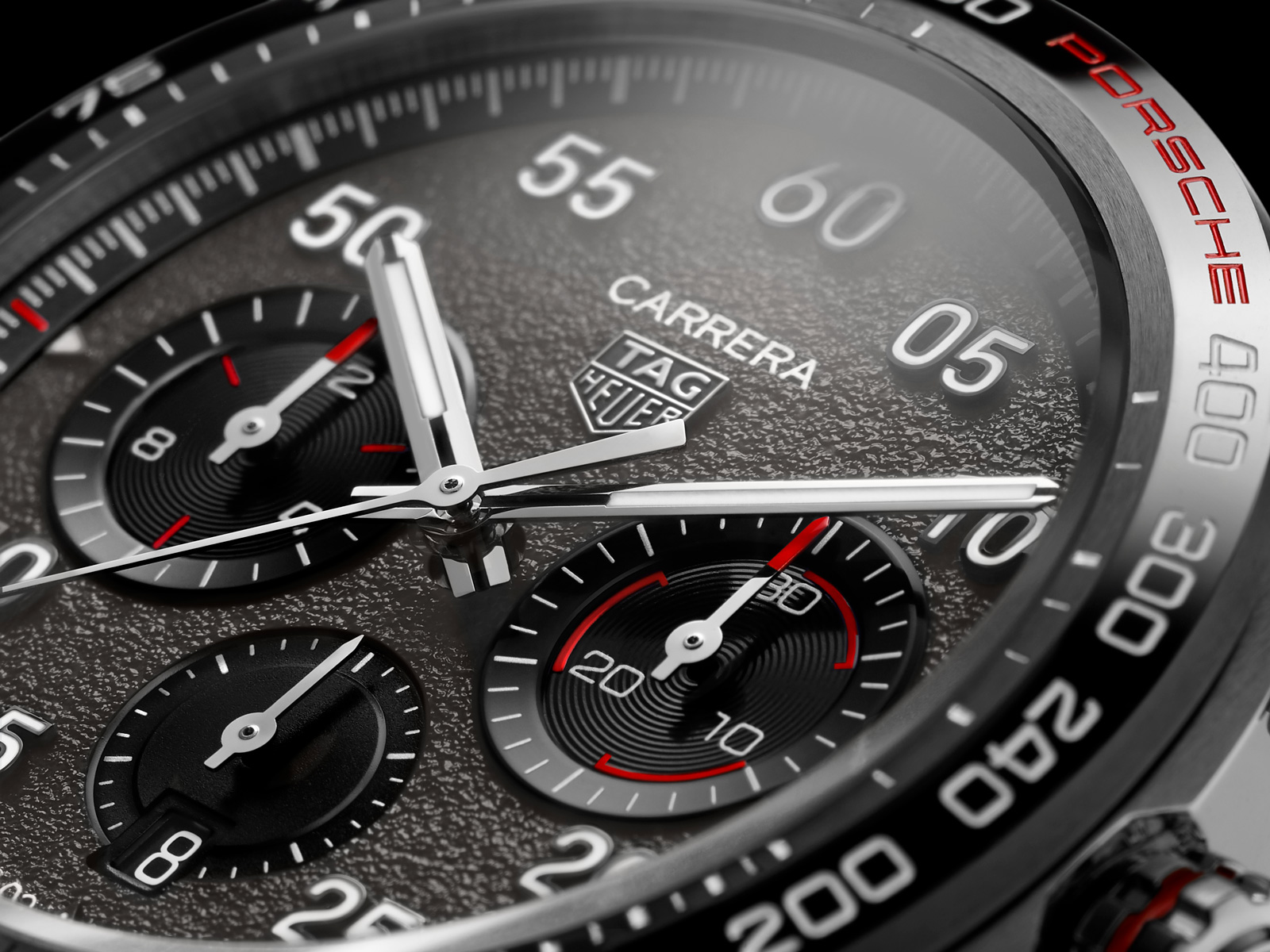 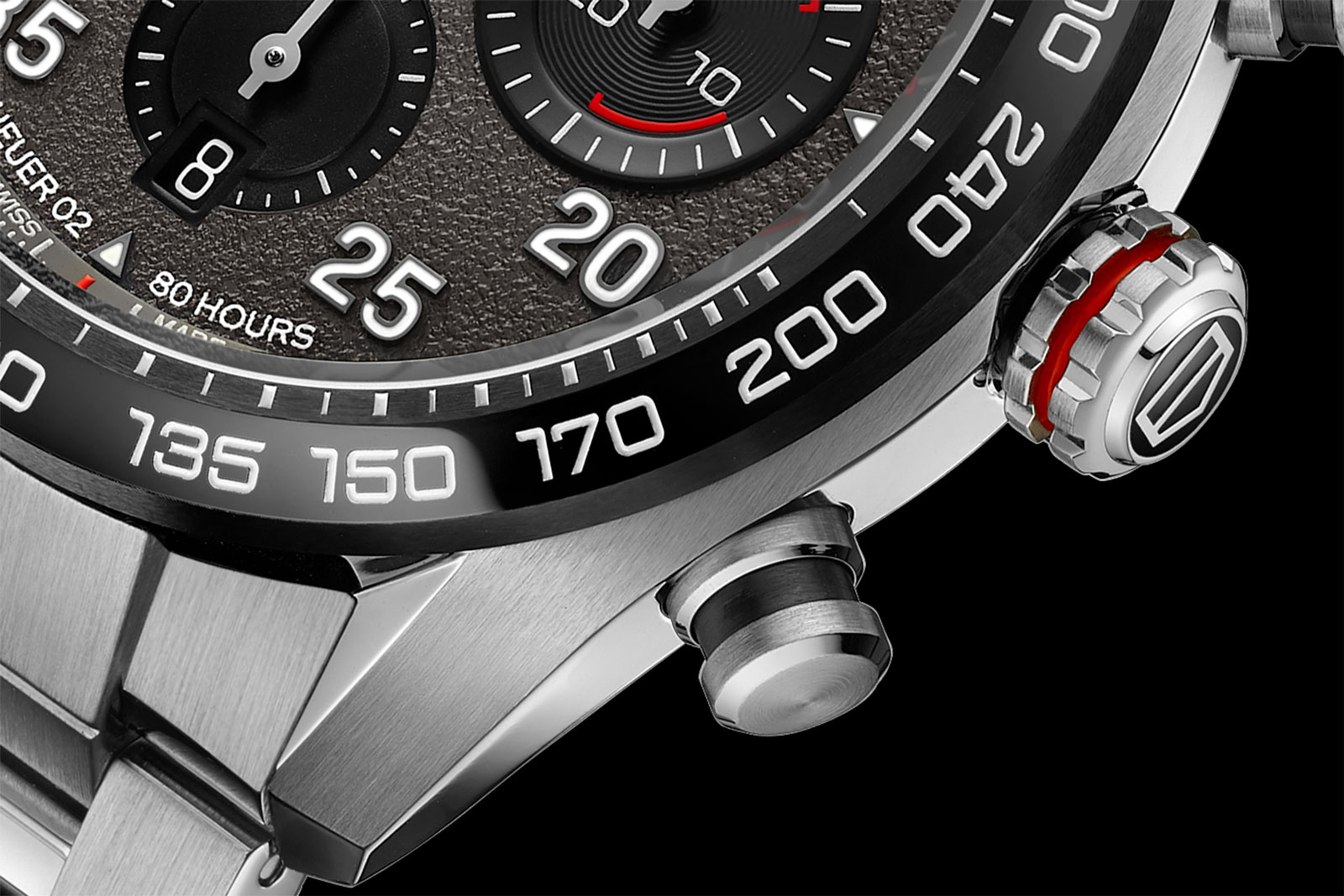 And the crown is ringed in red

The Carrera Porsche Chronograph is powered by the Heuer 02, an in-house chronograph movement that features a column wheel and vertical clutch. It has an impressive 80-hour power reserve – almost twice the industry norm. And unique to the Porsche edition is a rotor shaped like the steering wheel in the current generation of Porsche automobiles. 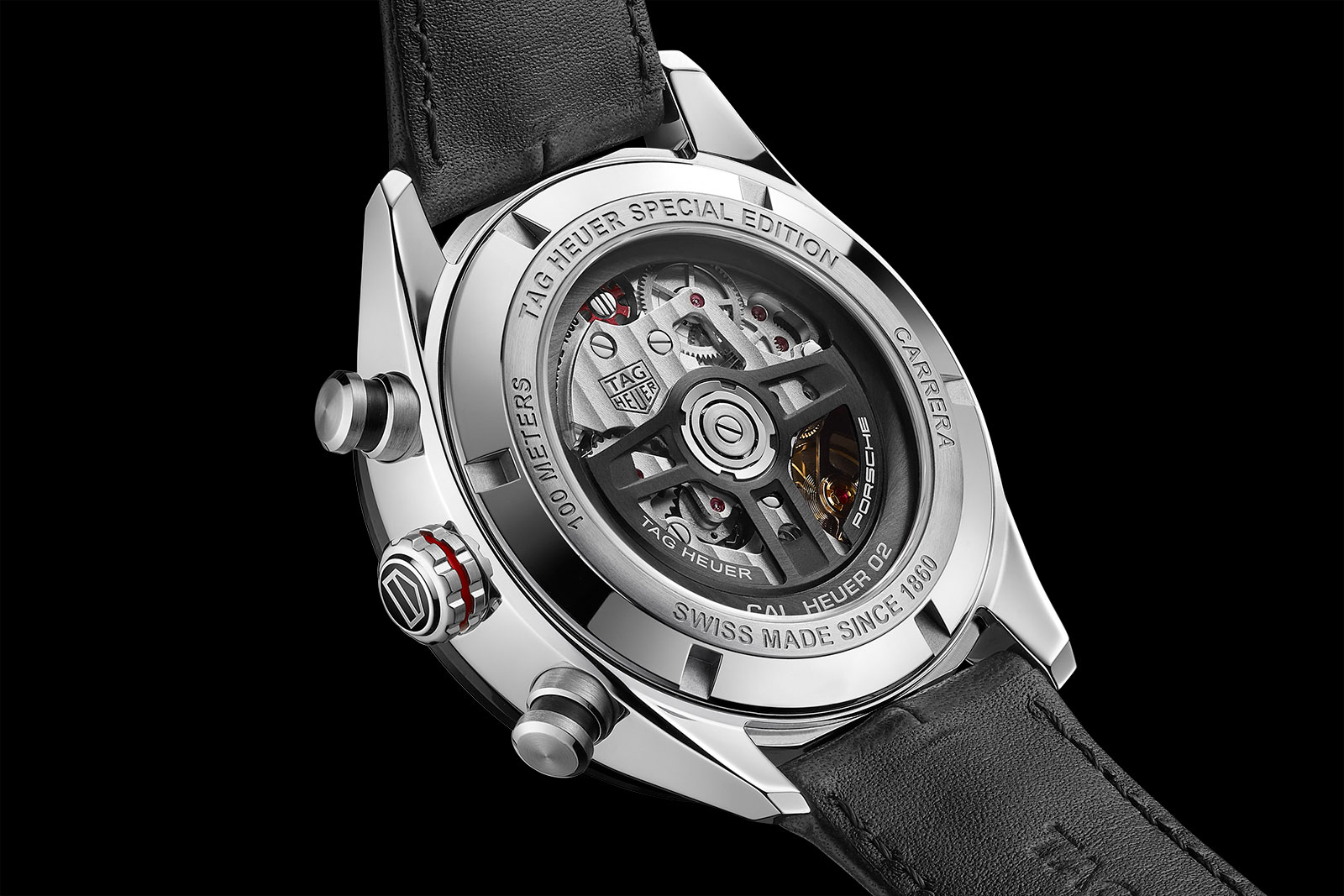 Availability: From February at boutiques and authorised retailers
Price: US$5850 (leather), US$6050 (bracelet)

A blue and white collab between the watchmaker and blog.