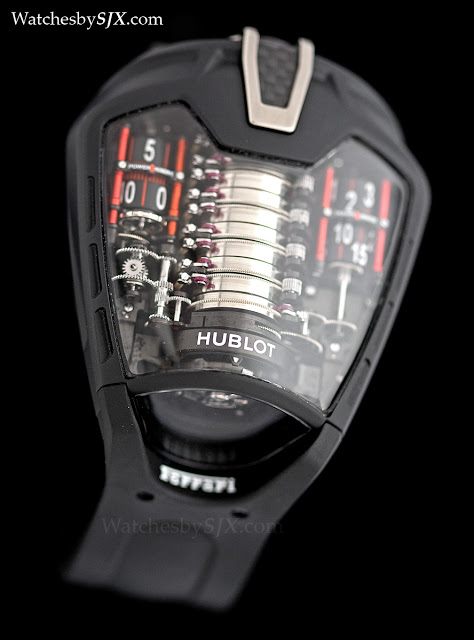 Inspired by the hybrid LaFerrari supercar, the Hublot MP-05 LaFerrari is a superwatch. It has a transverse movement shaped like a car engine, with a vertical tourbillon at one end, and a record-breaking 50 day power reserve. Hublot has been rapidly growing its line-up of Ferrari timepieces since inking its agreement with the Italian carmaker two years ago. Most of the Ferrari timepieces are ordinary, Big Bang-based watches. The MP-05 LaFerrari is radically different. The Hublot MP-05 LaFerrari is exotic as the cars it is inspired by. Housed in a sleek, black PVD coated titanium case, the MP-05 LaFerrari was conceived by Mathias Buttet, Hublot’s talented head of development. Essentially a tourbillon wristwatch with a massive power reserve of 50 days, the LaFerrari watch has 11 barrels, each with its own ruby roller to minimise friction and keep them in place. The 11 barrels are laid out in a straight line down the centre of the movement, and all unwind simultaneously. By way of comparison, Hublot’s closest competitor in the power reserve stakes, the Rebellion T-1000 Gotham, has a trifling 41 day power reserve. The movement of the MP-05 LaFerrari is entirely vertical, that is to say all the gears are vertical, something pioneered by the Cabestan tourbillon. Rotating drums indicate the time on the right side of the movement, and the power reserve on the left, all of which are secured by red anodised bars, just like the roll cage of a car.

And at six o’clock, at the base of the case, is the vertical tourbillon, a feature found in several other timepieces created by Buttet, including the MP-02 Key of Time, which tells the time at varying rates. The tourbillon in the LaFerrari watch is extremely large, with a balance wheel measuring 14.5 mm in diameter, a feat possible thanks to the enormous torque of the 11 mainsprings. At the other end of the case is the socket in which a key can be inserted to wind the watch. The key is actually a device like an electric drill, which winds the watch rapidly, saving the user the agony of having to wind all 11 barrels manually.

The view from the back is consistent with the engine aesthetic, with a bridge running lengthwise similar to an engine frame. Another socket in the back allows the time to be set.

Only 50 numbered pieces of the Hublot LaFerrari will be made, with a faintly ridiculous retail price of S$585,300 including 7% tax, which is equivalent to about US$475,000. That is approximately a third of the retail price of the actual LaFerrari supercar. – SJX