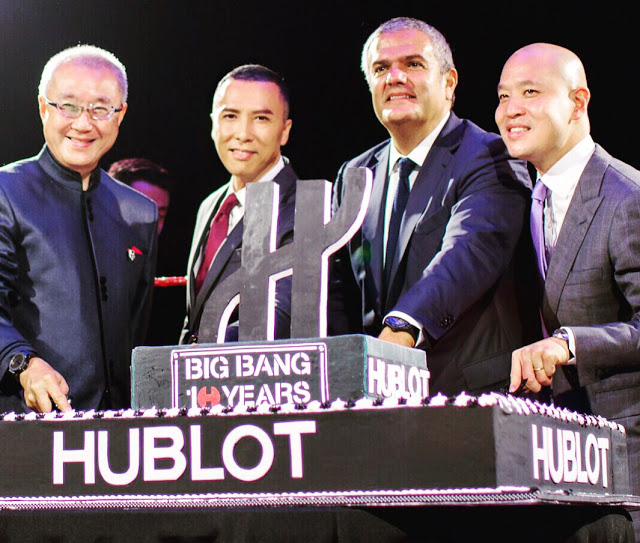 Movie star Donnie Yen was in Singapore to open the Hublot pop-up store and unveil the yellow gold Hublot MP-05 LaFerrari Golden Jubilee, a one of a kind creation set with 440 diamonds. A unique piece created to mark Singapore‘s 50th anniversary, the Hublot MP-05 LaFerrari Golden Jubilee is a million dollar whopper in yellow gold, set with over 13 carats of baguette-cut diamonds. It was launched by Hong Kong actor Donnie Yen, best known for his roles Ip Man martial arts film series and the upcoming Rogue One: A Star Wars Story, who was in Singapore to inaugurate the Hublot pop-up store. Open till the August 26, 2015, the Hublot pop-up store in Singapore is the largest ever, set up to mark the 10th anniversary of the Big Bang and Singapore’s 50th National Day. The Red Dot Bang was created for this double anniversary, while the LaFerrari Golden Jubilee is  a one-off creation especially for Singapore. Shaped like a car engine, the LaFerrari movement has seven barrels which give it a record-setting 50 day power reserve. Winding those 50 barrels requires a small electric drill that connects to a socket at 12 o’clock. Sitting at six o’clock, at the end of the stacked barrels, is a vertical tourbillon, a signature feature of Hublot’s technical development department (which is the former BNB Concept movement specialist). We published a full explanation of the watch and movement back in 2013.