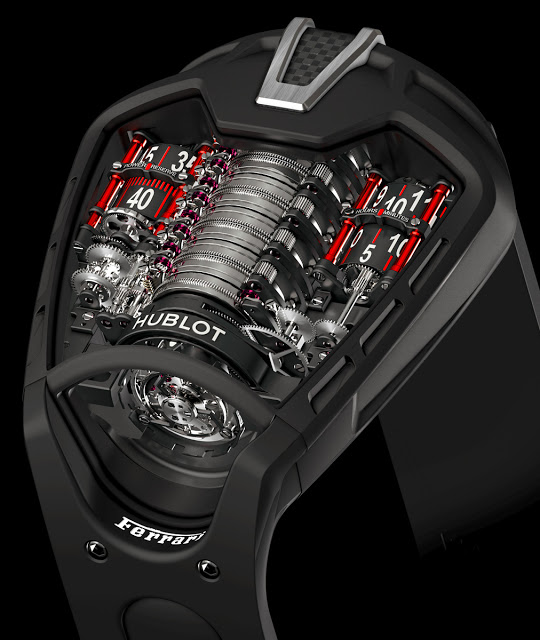 At Baselworld 2013 Hublot announced the amazing Masterpiece MP-05 LaFerrari. It has a cylindrical, transverse movement with a tourbillon regulator and 50 day power reserve. Named after the limited edition LaFerrari hybrid supercar launched at the Geneva Motor Show in January, the Hublot Masterpiece MP-05 LaFerrari is probably the most intriguing automotive themed watch of recent years. It was created by Mathias Buttet, the technical genius at Hublot who was also behind the MP-02 Key of Time.

The movement – which has 637 parts, the most of any Hublot calibre – has 11 barrels laid out side by side in a straight line down the centre of the watch. These barrels unwind simultaneously, and give the watch a record 50 day power reserve. This puts the MP-05 LaFerrari ahead of the previous record holder, the Rebellion T-1000 which can run for 41 days. All the gears of the movement are vertical, bringing to mind the watch that was the first of this type, the Cabestan Vertical Winch Tourbillon.

At the front of the watch case, at the base of the stacked barrels, is the vertical tourbillon. Beating at 21,600 bph (3 Hz), the tourbillon has an extremely large balance wheel with a diameter of 14.5 mm.

The time is displayed on two revolving cylinders on the top right of the watch, with the upper cylinder indicating the hours and the lower one the minutes.

On the other side is the power reserve display on a single cylinder. Both the time and power reserve cylinders are secured by red anodised reinforcement bars.

The 11 barrels are wound with a key that has to be inserted into a socket at the top of the watch, while the time is set by a crown under the watch. The case is black PVD coated titanium, fitted to a rubber strap. Only 50 pieces of the MP-05 LaFerrari will be made.