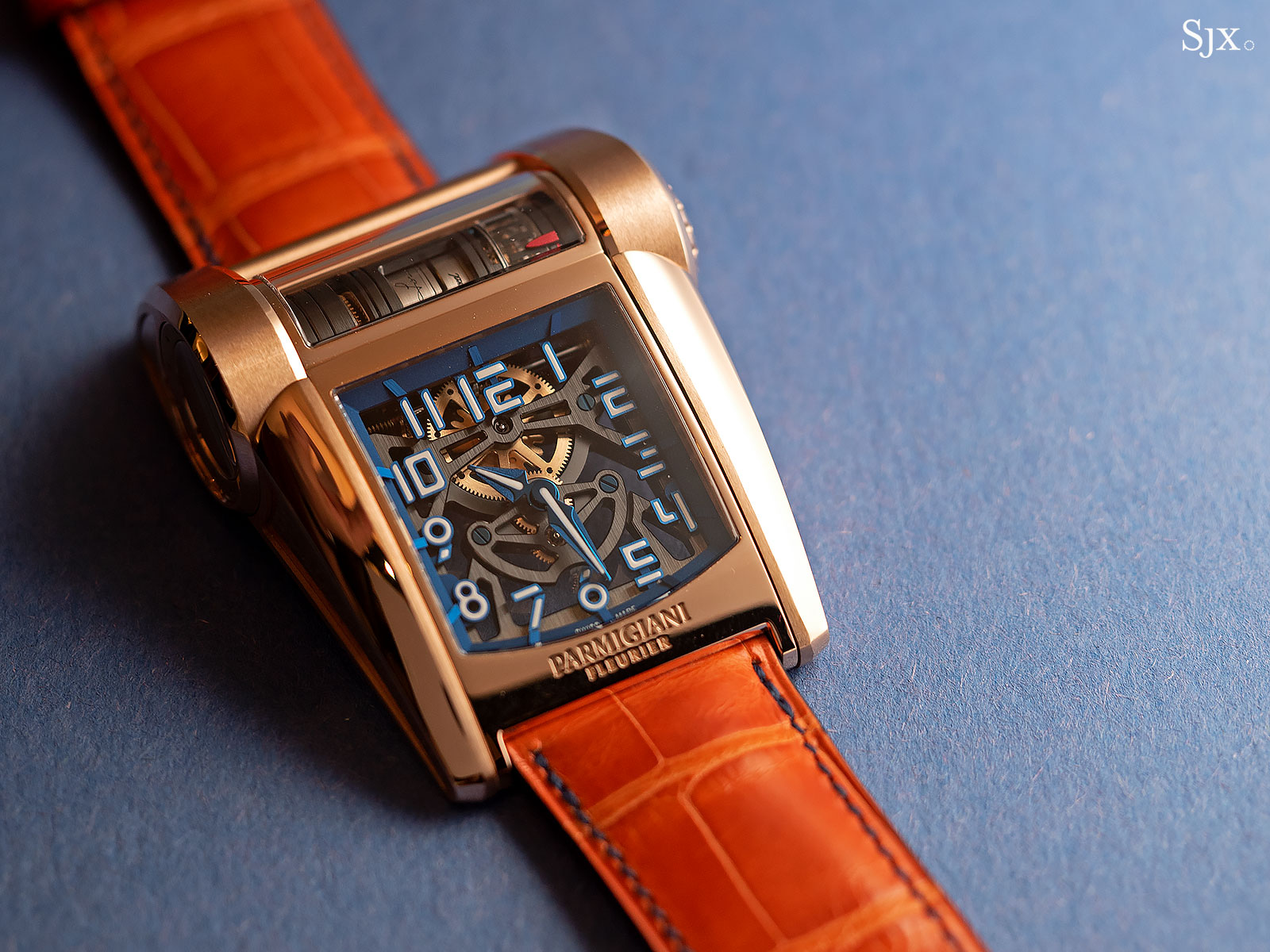 Parmigiani is one of the most under appreciated modern day watchmakers, producing high quality watches, inside and out, albeit with styling that is not to everyone’s taste. Its strengths are most evident in its most avant-garde watches, namely the timepieces produced in collaboration with carmaker Bugatti.

There are generally two classes of automobile (or sci-fi) inspired watches – ones with automotive elements bolted on, like a wheel rim rotor or brake calliper hands; and the other that have been mechanically constructed in a manner that’s different and three-dimensional. Watches in the latter category are more impressive, and also more expensive, including timepieces like the Hublot MP-05 LaFerrari, MB&F HM4 Thunderbolt, and Parmigiani’s top of the line Bugatti watches. The one that start it all, the Bugatti Type 370, was introduced in 2005 together with the Bugatti Veyron. Tubular with a transverse movement featuring vertically positioned gears, the Type 370 was ahead of its time. The Bugatti Super Sport watch that came after was less interesting, being wedge-shaped, slightly clunky and not that compelling technically.

But with the new Bugatti Type 390 wristwatch Parmigiani is back in form. Launched alongside the Bugatti Chiron Sport – a supercar with a top speed of over 400km/h and a US$3.4m price tag – the Type 390 a large watch with an arched profile that leaves it slightly slimmer than it appears.

The Bugatti Type 390 is nonetheless a large watch, measuring 42.2mm wide and 57.7mm long, standing 18.4mm high at the top of the tubular middle. The watch pictured has a custom livery specified by its owner, with fine perlage on the case sides. That can be replaced with other finishes, or even carbon fibre inserts. The case material and colour of the sapphire crystals can also be tweaked to the suit the owner’s taste. The unusual case form is a consequence of the unusually constructed PF390 movement, which is made up of 302 parts, or about double a regular tourbillon calibre. The PF390 is essentially a two-parter: the twin barrels and regulator stacked into a horizontally positioned cylinder, with the wheel train mounted on a perpendicular plane. The movement out of the watch case

One end of the cylinder has a sapphire porthole revealing the flying tourbillon regulator. The balance oscillates at 4Hz, or 28,800 beats per hour. While that’s the norm for ordinary movements, it is a relatively high frequency for a tourbillon, which typically run at 3Hz, or 21,600 bph. The higher frequency of the balance gives it greater inertia, and consequently stability, which is a useful property given the compact size of the tourbillon.

At the other end is the oversized crown that requires a push for it to pop out of the case for winding and setting. Because the crown is so large, it incorporates a torque limiting device to prevent the stem from being broken with overenthusiastic winding. The cylinder contains two barrels, one of which is engraved with the signature of Louis Chiron, and the other his nickname in French, le vieux renard. Translating as “the old fox”, it arose from the shrewd driving of the Monegasque racing driver, whose racing career spanned the 1930s until the late 1950s.

Both barrels are coupled in series, meaning they unwind one after the other. Together they provide 80 hours of power reserve, indicated by a red pointer at one end of the sapphire window. Beneath the power reserve indicator are three sets of planetary gears that reduce the gear ratio and also transfer energy from the barrels to the wheel train. The twin barrels out of the movement

Perpendicular to the cylinder is the wing that contains the hands and wheel train that is connected to the rest of the movement via a worm screw. It’s a skeleton dial with few moving parts beneath save for the gilded wheels of the going train; majority of the important bits, like the worm screw, can only be seen from the back. On this particular example the dial and hands are a bright blue that jumps out. Intriguingly the typography used for the hour numerals is similar to the custom font commissioned by Hermes for its Slim d’Hermes wristwatch. Parmigiani and the Parisian leather goods maker have a close working relationship – Hermes holds a 25% stake in Parmigiani’s sister company Vaucher – which might explain it. While the flamboyance of the construction and muted colours of the movement leave the finishing less obvious, the watch is carefully and finely finished, with components that feel exceptionally precise in their manufacture. All of the black-coated bridges are finished with straight graining on their tops, with their edges bevelled and polished. The same finish is applied to smaller components, like the escape wheel bridge beneath the balance. Other components also illustrate the care in finishing, including the brushed finish and sharply engraved, ink-filled italic script on both barrels. The large wheels of the gear train are circular grained and extremely refined in their details. Admittedly the bevelled edges lack sharp inward corners of high-end artisanal watchmaking, but the decoration here is as good as it gets for a big brand.