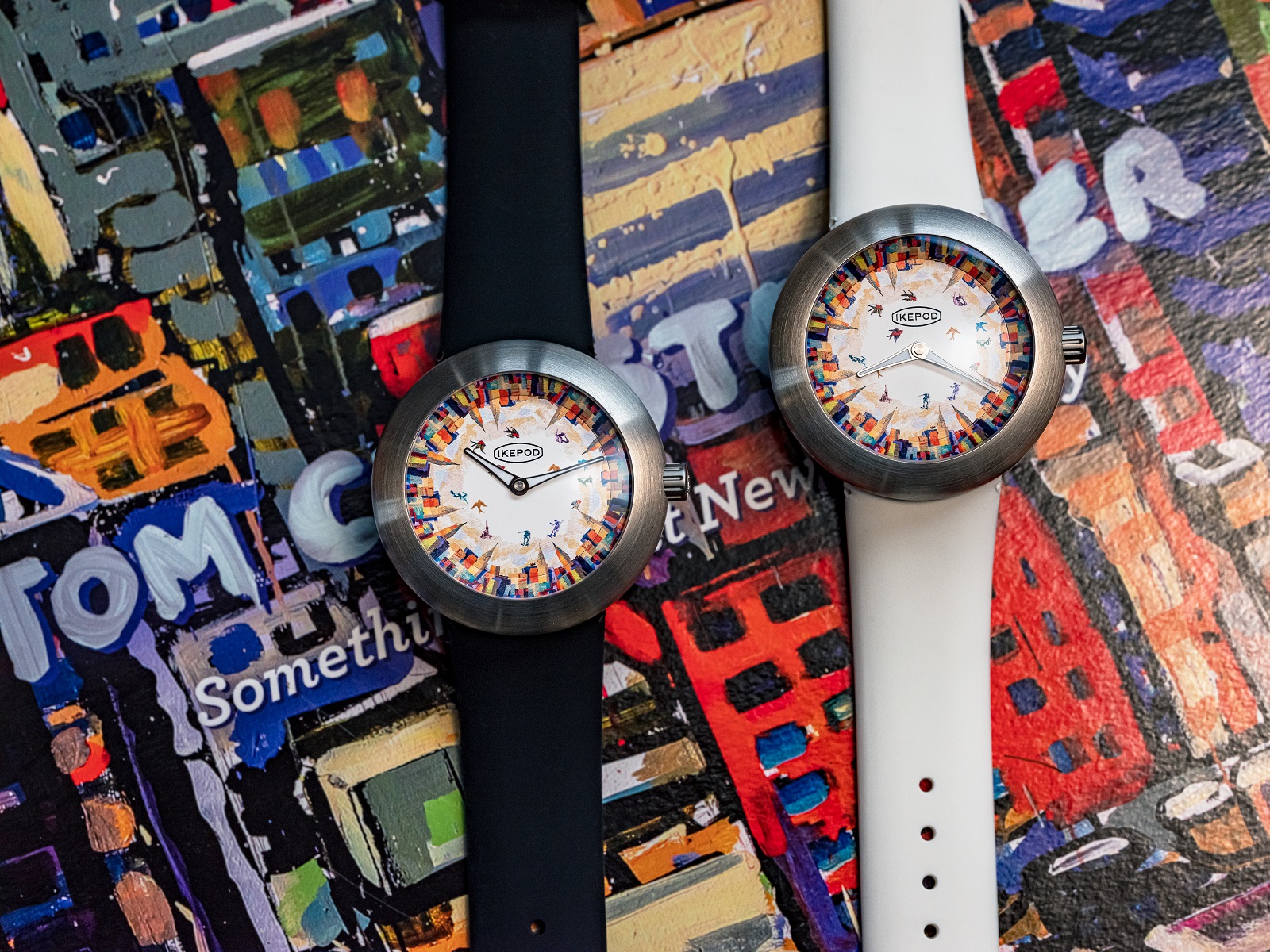 Having been resurrected three years ago, Ikepod is returning to collaborations with contemporary artists, this time for Megapod designed together with Tom Christopher, best known for his paintings of New York City streetscapes. 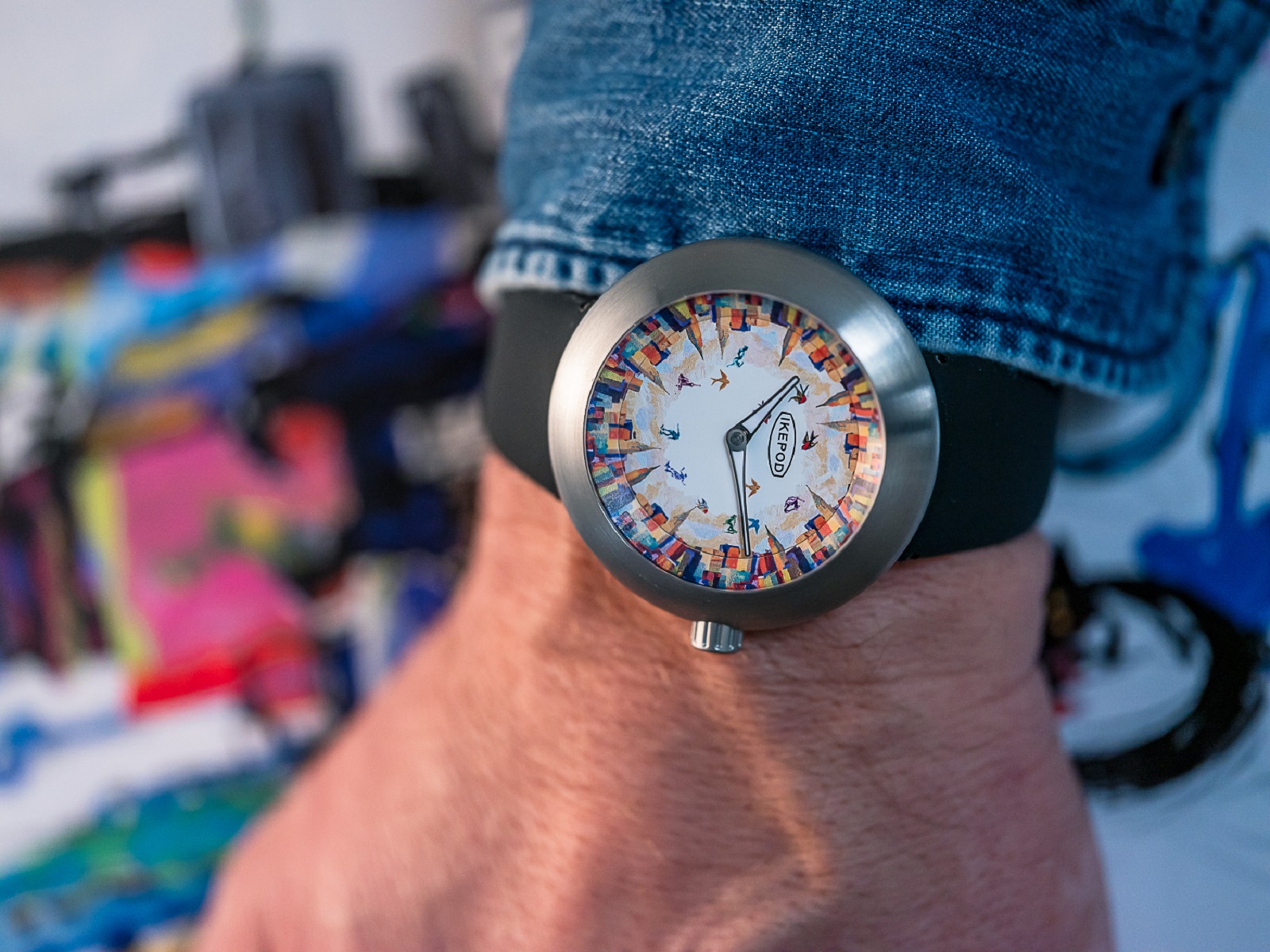 The Tom Christopher Megapod is the brand’s first artist collaboration since the Jeff Koons and KAWS watches created by an earlier iteration of the company. To recap, the brand was originally founded by Swiss businessman Oliver Ike and industrial designer Marc Newson in 1994, but failed to achieve commercial success despite its distinctive designs, in part due to high retail prices that resulted from its small production and high-quality components.

It closed its doors in 2006, before being revived by art collector and dealer Adam Lindemann, whose influence helped gets Mr Koons and KAWS on board. But the brand continued to focus on pricey watches, and went bust once again in 2012. Now owned by a pair of Swiss entrepreneurs, the latest iteration of Ikepod is very much sticking with entry-level watches.

Having been the brainchild of Mr Newson, and then backed by Mr Lindemann, Ikepod’s idiosyncratic timepieces were long popular with certain well-heeled fans of contemporary art. Kanye West, for instance, sported an Ikepod on the cover of GQ.

With that, along with Ikepod’s current focus on affordable watches, in mind, the Tom Christopher collaboration makes perfect sense. Mr Christopher’s colourful, expressionist style creates a striking dial motif, while not adding significantly to the price of the watch since his works range in price from several thousand to the low five figures. 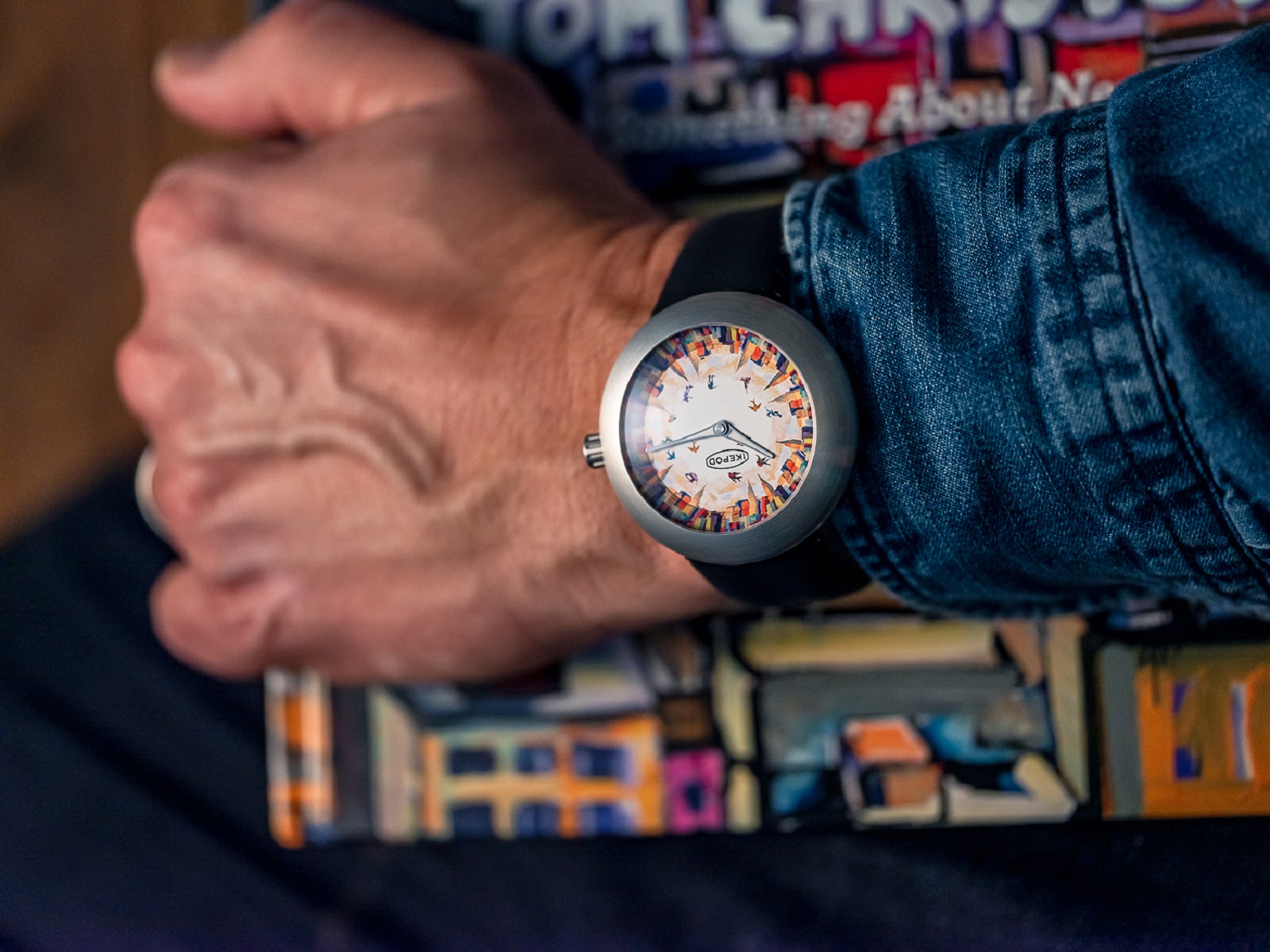 As a result, the watch is compelling also because of its price. In contrast to the earlier iterations of Ikepod – both of which went bust – today’s Ikepod offers watches priced mostly under US$2,000. Though it’s largely made in China, the Megapod retains the design of the original-generation watches, which is the focal point of the brand in the first place.

The Tom Christopher Megapod costs a reasonable US$1,700, putting it within reach of most enthusiasts. It’s unusual in its price range, being one of the few artist-collaboration watches in the entry level price segment. 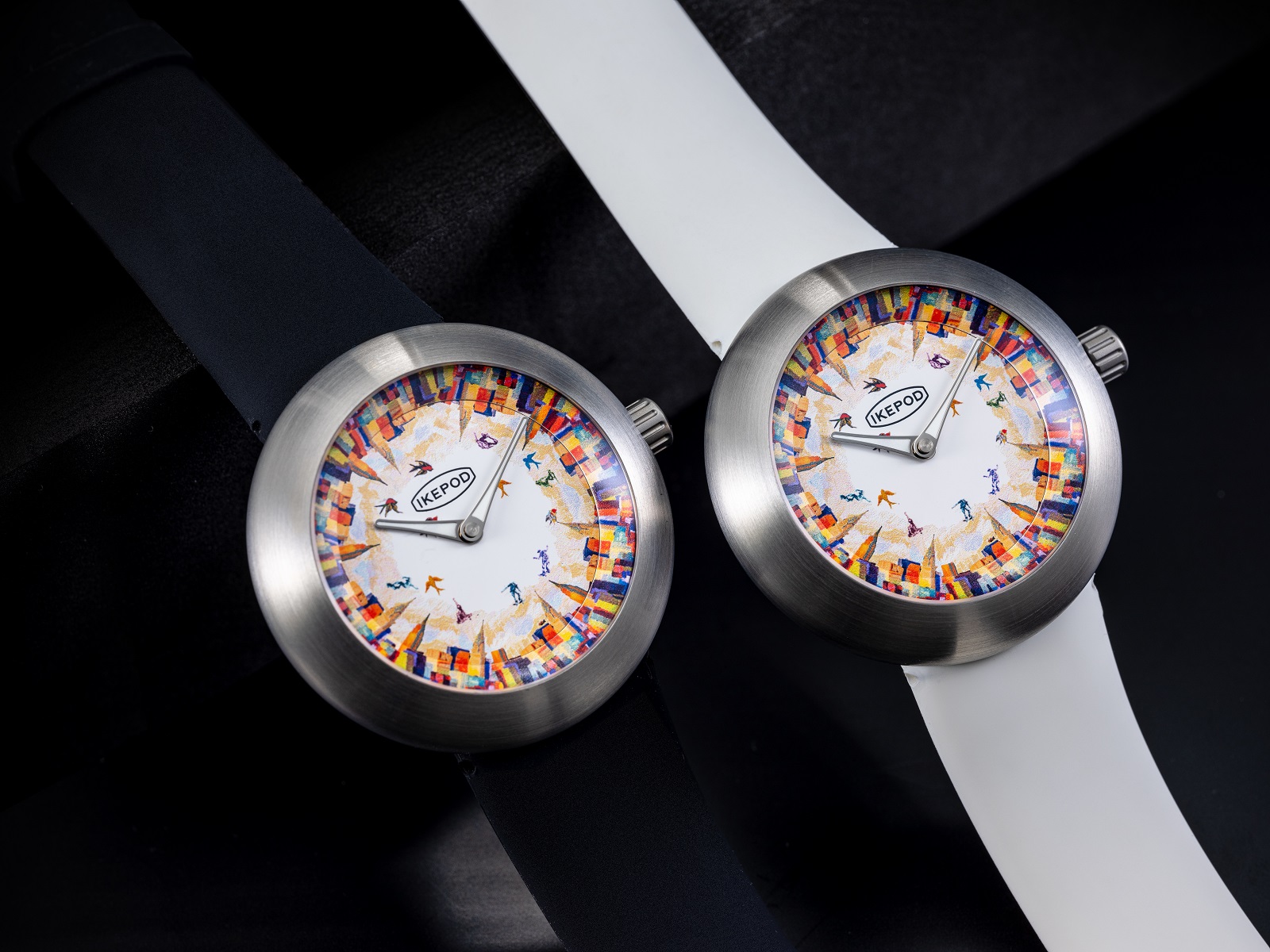 The dial of the new Megapod features Skaters in the Sky, a painting Mr Christopher created specifically for the collaboration.

Rendered in lively colours, Skaters in the Sky depicts quintessential elements of New York City – skaters, birds, and skyscrapers – all representing the constant motion of the Big Apple. 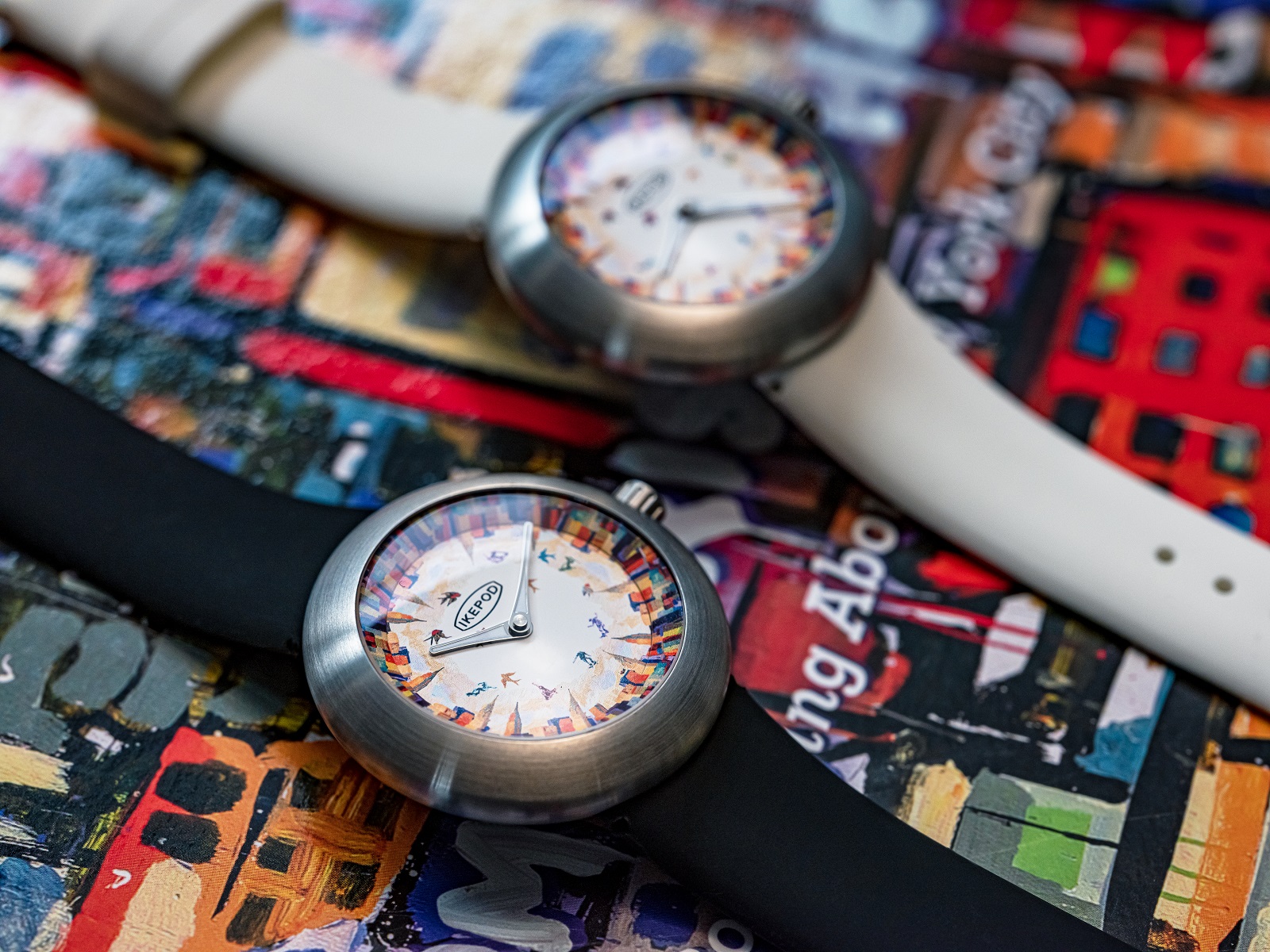 Style wise, the Tom Christopher Megapod preserves the “UFO” case originally designed by Marc Newson, which has no lugs and a circular, satin-brushed finish.

Although the watch has a diameter of 46 mm, it wears smaller due to its lug-less design, thus making it suitable even for smaller wrists. 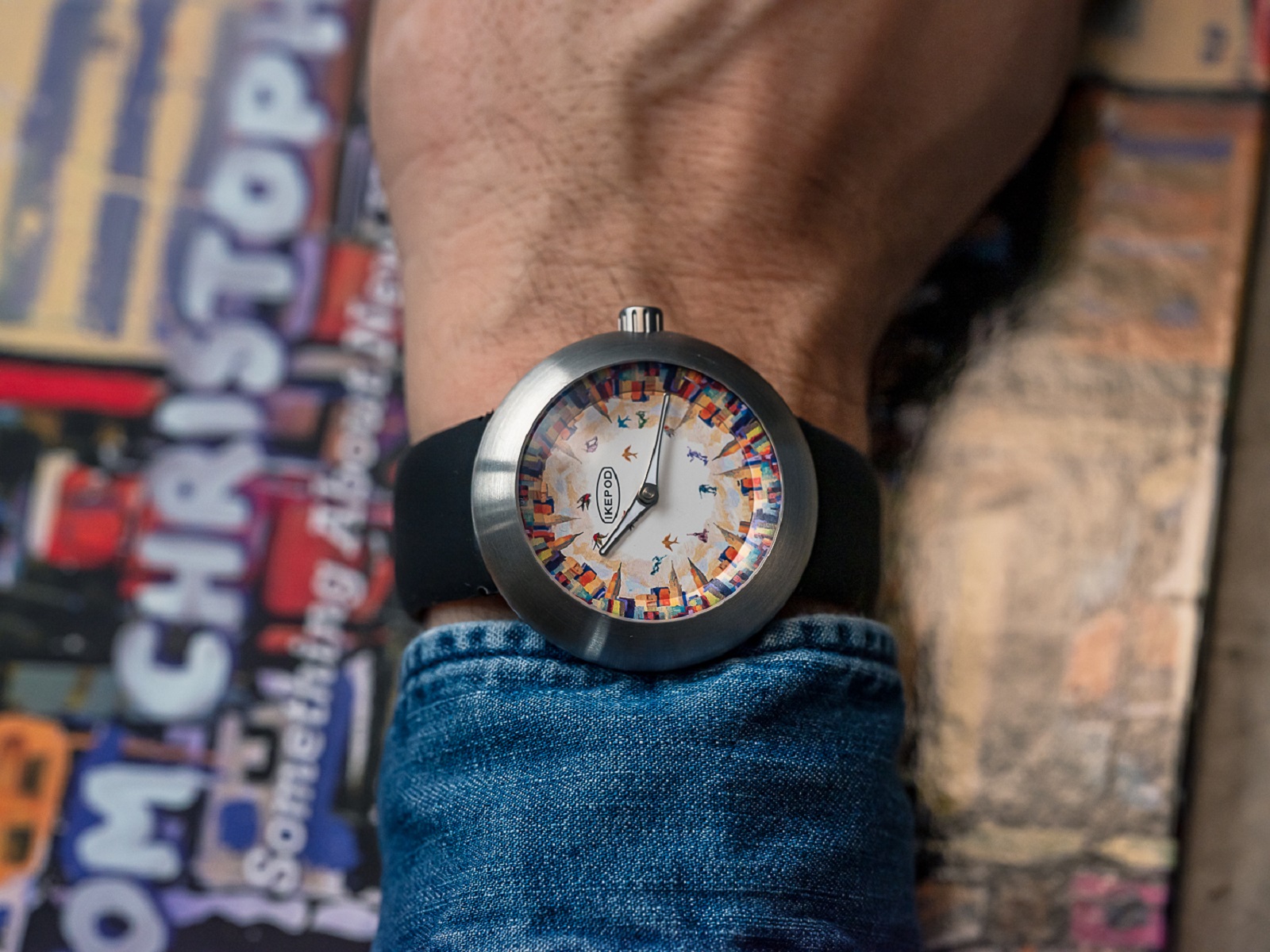 Though the Megapod very much echoes the look of the original, its construction has simplified. Now the case has a conventional screw-down case back, instead of the one-piece monocoque case of the original, which required lifting a tightly-fitted bezel to remove the movement.

Visible through the screw-down back is the Miyota 9039 produced by the movement maker owned by Citizen. Though a low-cost calibre, it is a top-of-the-line offering from Miyota, explaining the 4 Hz balance frequency, 42-hour power reserve, and hacking seconds. It’s even decorated in a basic form, with Geneva striping on the bridges and the Ikepod logo on the rotor. 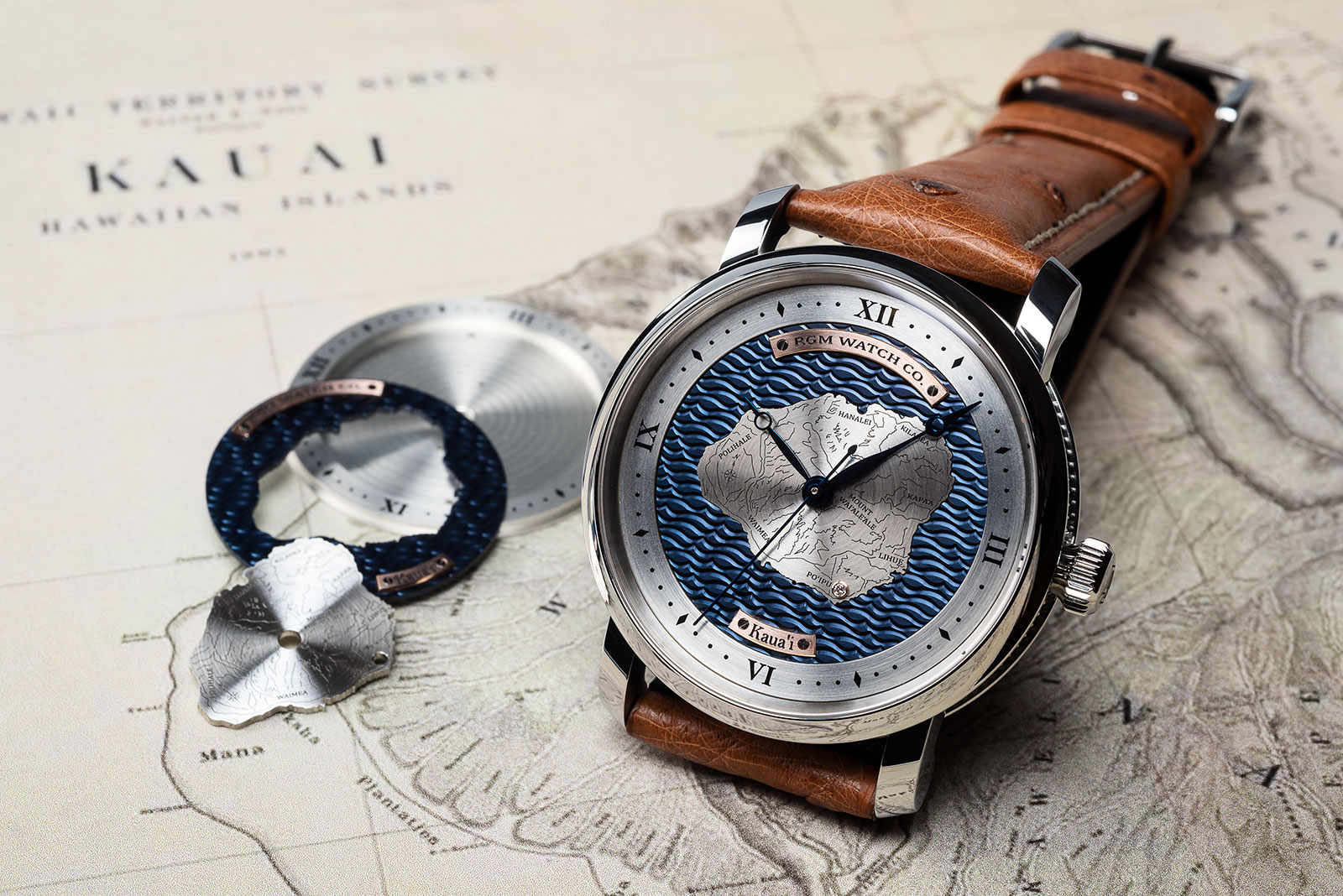 A pioneering American independent watchmaker established in 1992, RGM Watch Co. long ago developed an in-house expertise in traditional guilloche, resulting in a Breguet-inspired aesthetic that defined the brand in its early years.

But RGM – named after founder Roland G. Murphy – has since diversified its offerings to include custom and bespoke watches. The latest example of a custom commission is Model 25 “Kauai”, a wristwatch with a dial bearing the map of the eponymous Hawaiian island.

RGM is especially good at dial making, and the Kauai is a good example of what the brand can do. While the Hawaiian island motif is personal to the client who ordered the watch, the quality of the execution is evidently high.

The wave guilloche on the dial is engraved the old-fashioned way, with a hand-operated straight-line engine, while both plaques on the dial are solid gold that were cut by hand on a jig borer. And almost all of the dial is produced in house, save for the laser engraving of the map and the blue galvanic coating. The value of the watch is almost entirely in the one-off, hand-made dial – and it offers strong value in itself. The Kauai cost US$13,900, and similar custom watches are priced about the same – alternatives include enamel or marquetry dials – making them a good value proposition, especially since comparable watches from establishment Swiss brands would cost substantially more.

Located in Mount Joy, a town in Pennsylvania not far from the former Hamilton factory in Lancaster, the RGM workshop is home to a significant number of guilloche machines – rose engines for curved lines and straight-line engines for straight lines – giving the brand an ability to create a diversity of guilloche in house, typically on dials but also on movement bridges. 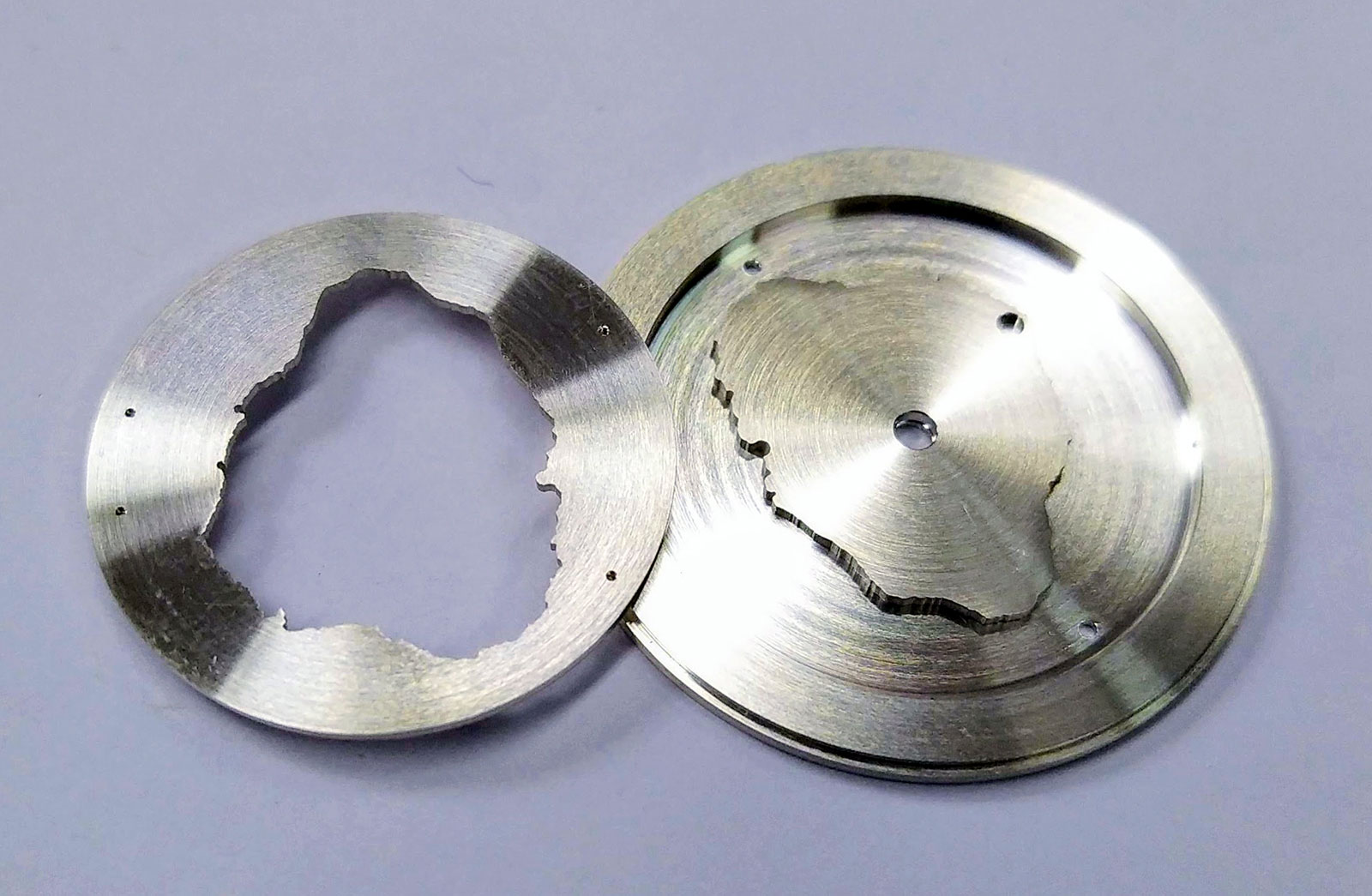 The blanks for the two sections of the dial – a lower disc with the map and chapter ring, and an upper disc finished with wave engine turning. 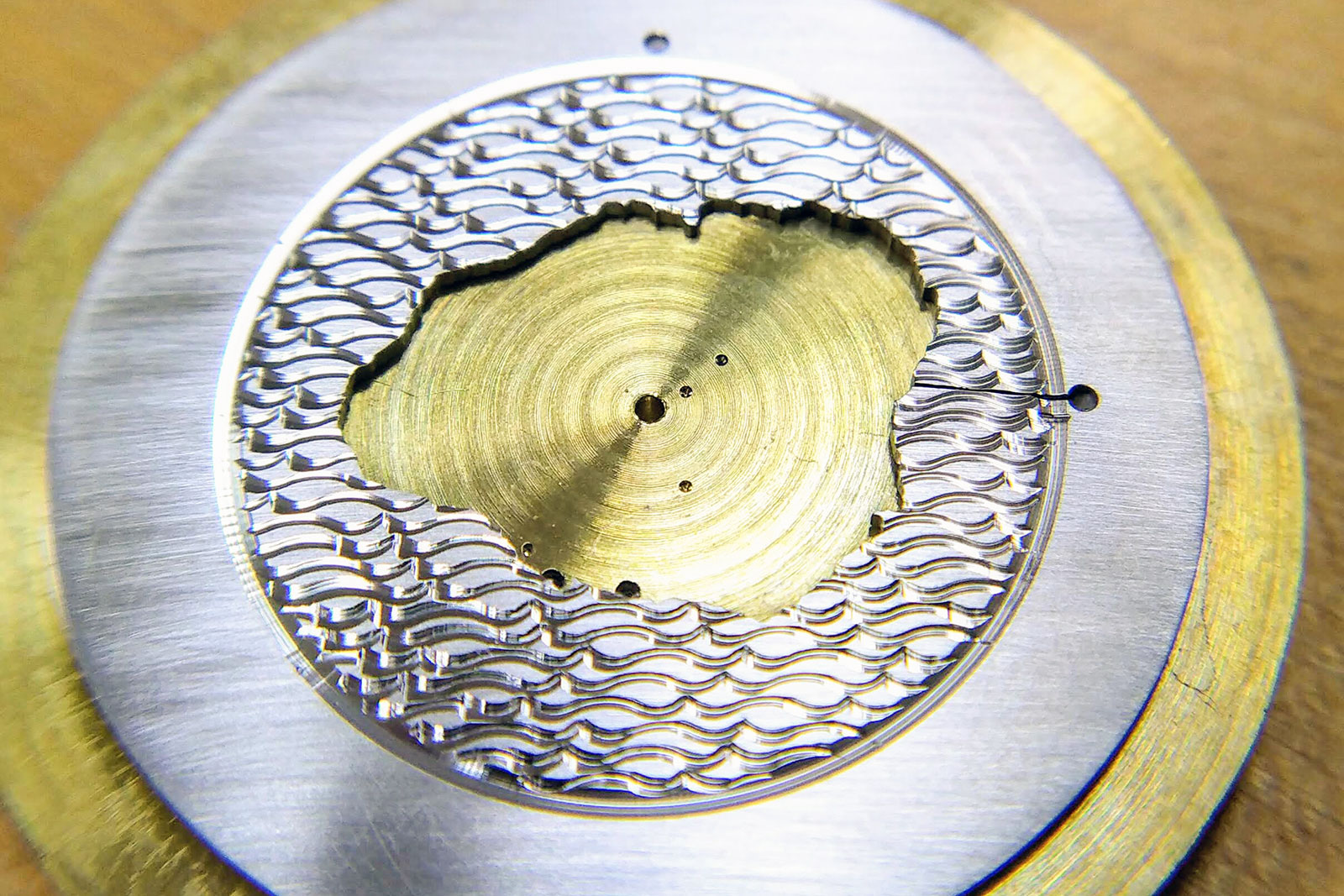 The wave guilloche engraved on a test plate

Designed in collaboration with the client, the dial depicts a map of Kauai, with a brilliant-cut diamond to mark a location important to the owner. Laser engraved with a high degree of detail, the island is surrounded by a deep blue sea that is entirely hand-made guilloche. 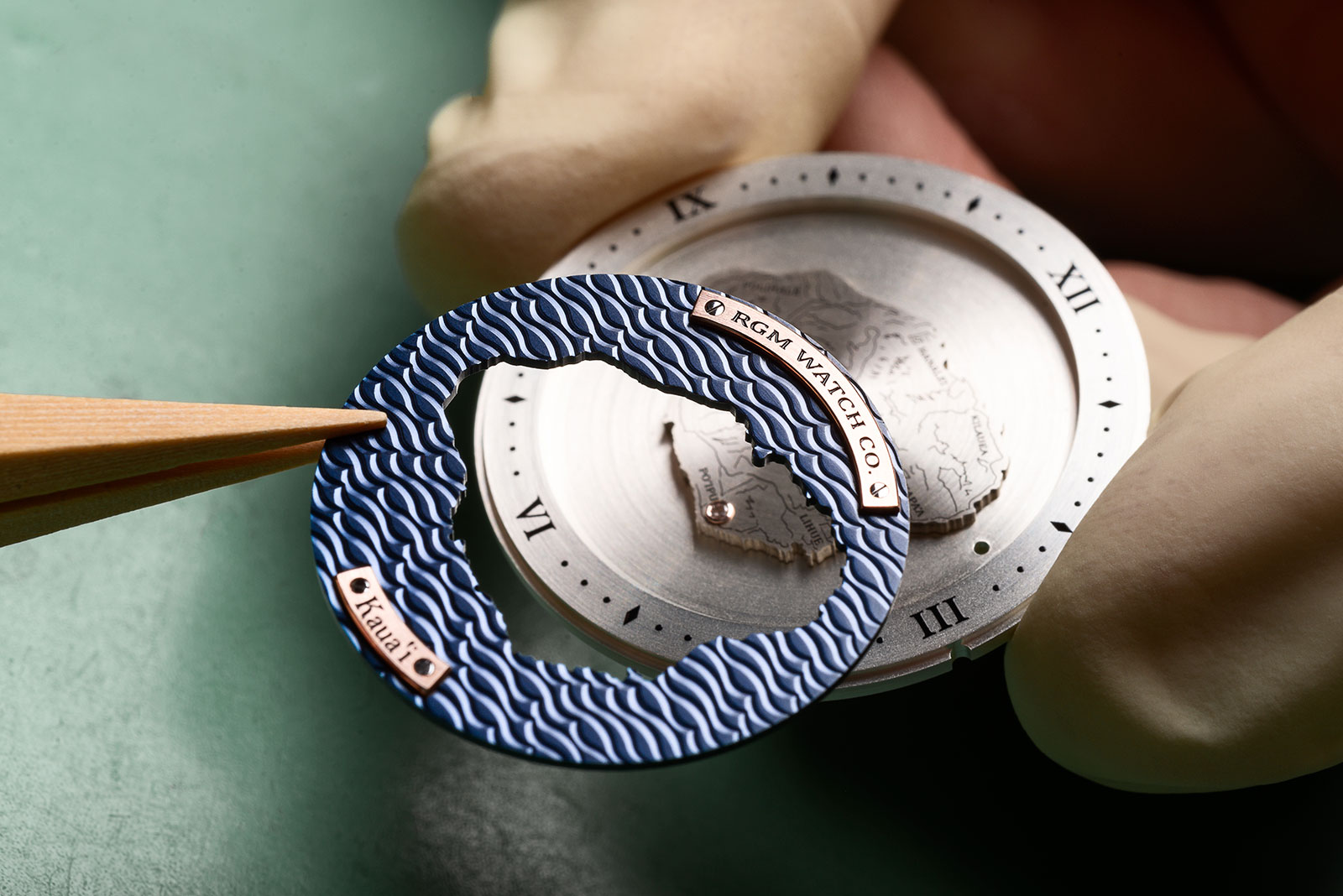 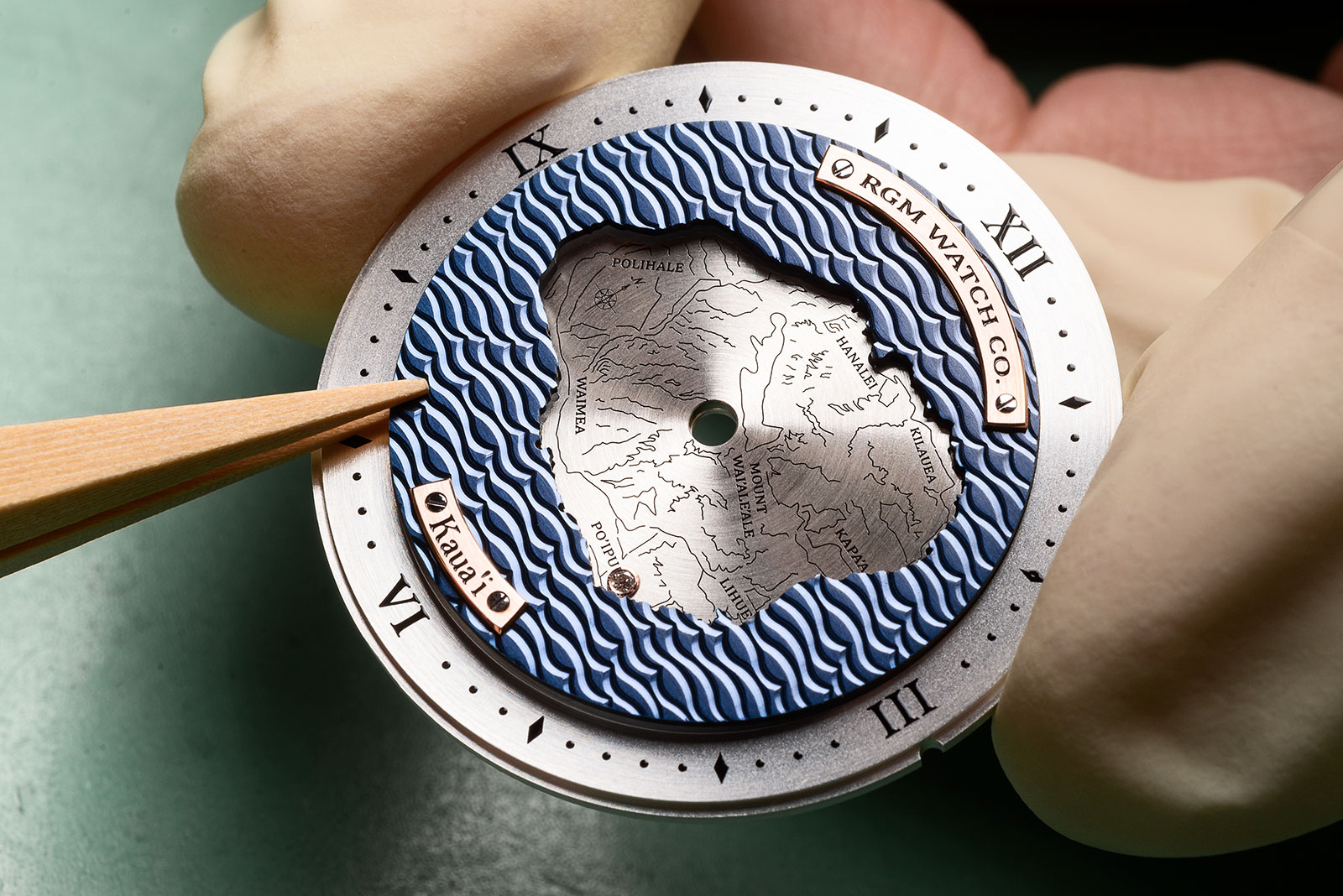 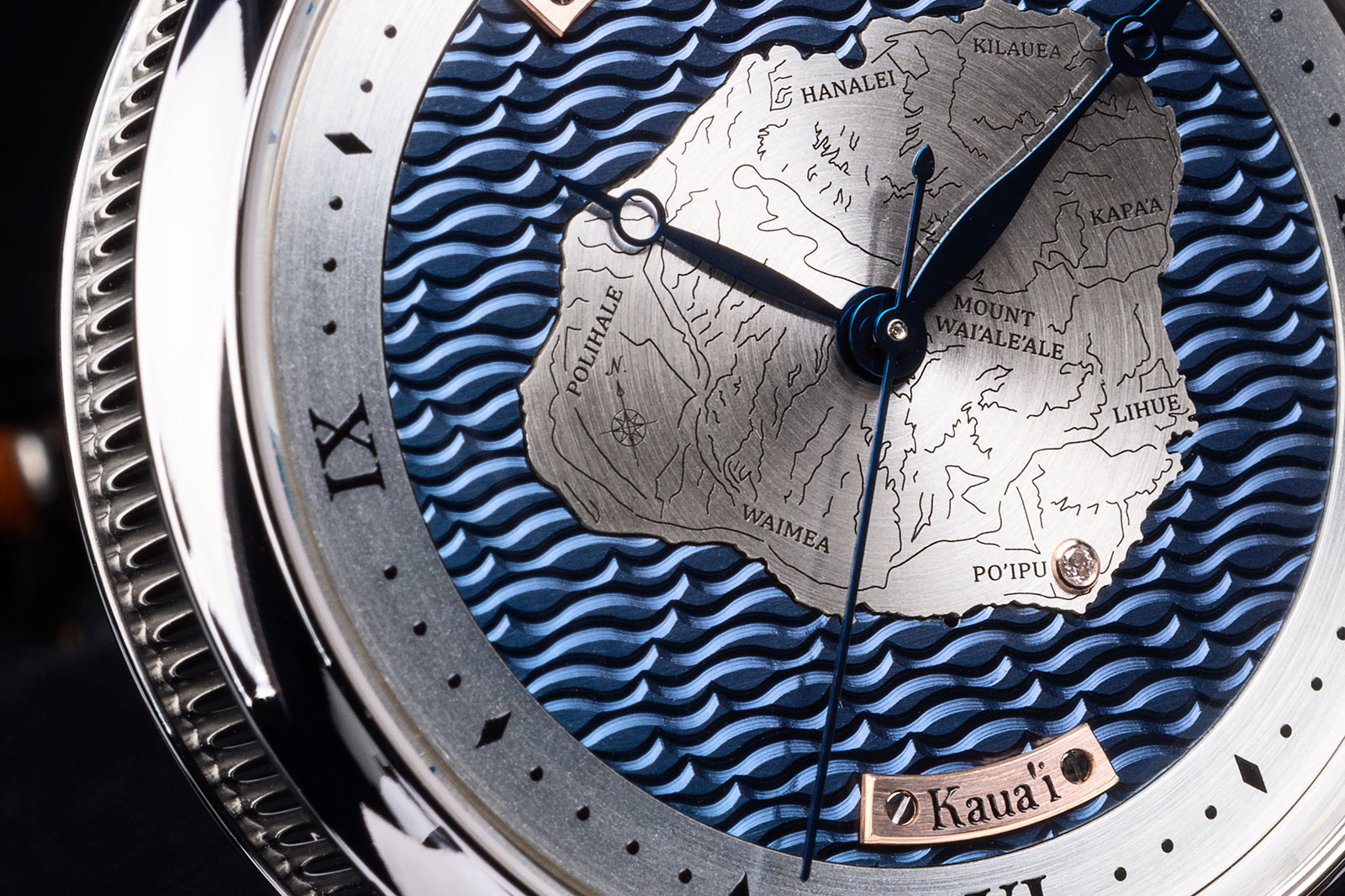 The Kauai is based on the Model 25, a time-only watch with centre seconds that was conceived as a canvas for a variety of dial decoration, including guilloche, cloisonné enamel, and wood marquetry. Featuring a Breguet-inspired style with a fluted band, the steel case is 40 mm in diameter. And it is made in the United States; some of the brand’s more affordable watches rely on Swiss-made cases. 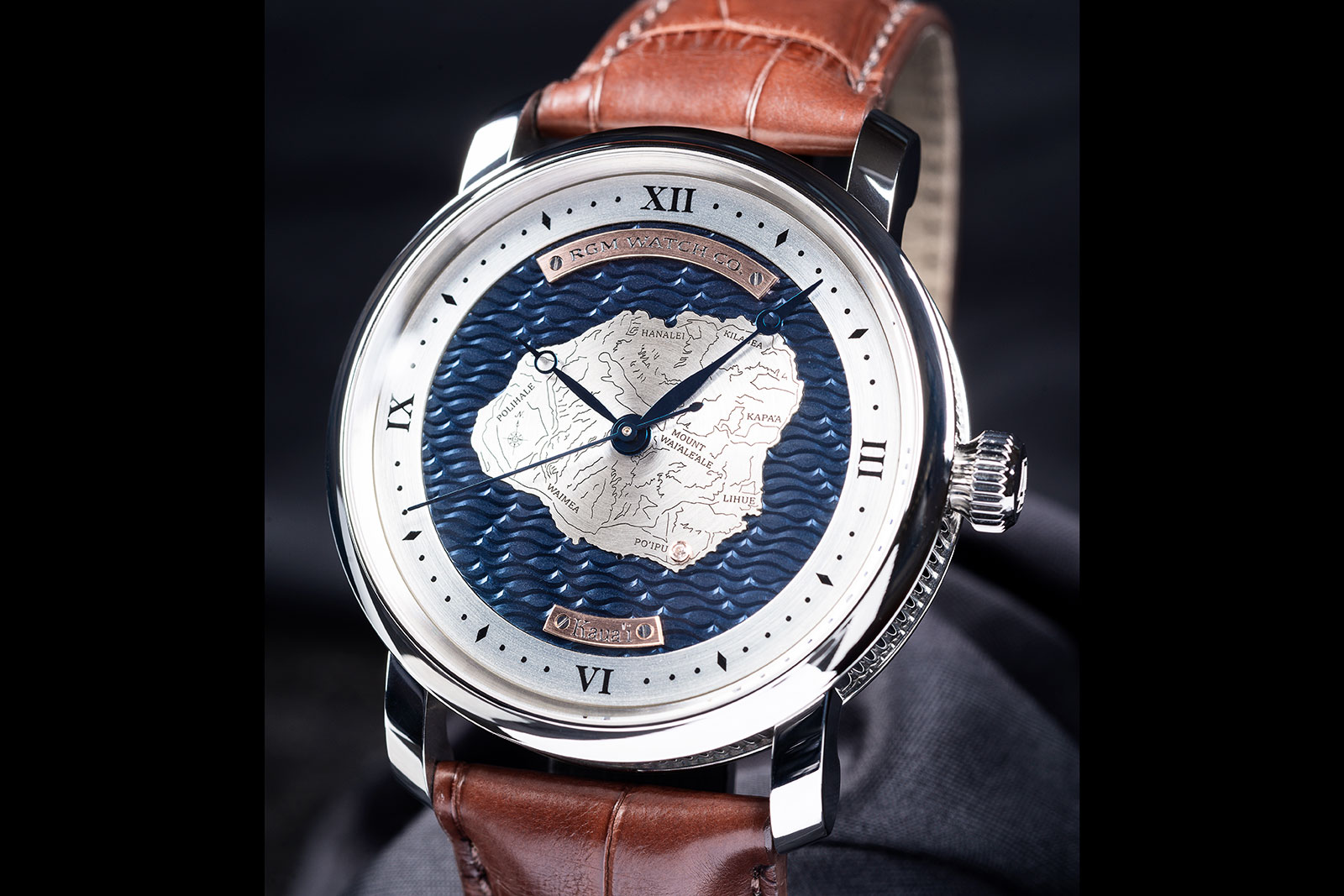 Inside is a Swiss-made automatic movement with a 22k gold rotor made by RGM. Although RGM does not reveal the specific calibre inside, it is clearly the upscale variant of the ETA 2892 made for Omega. 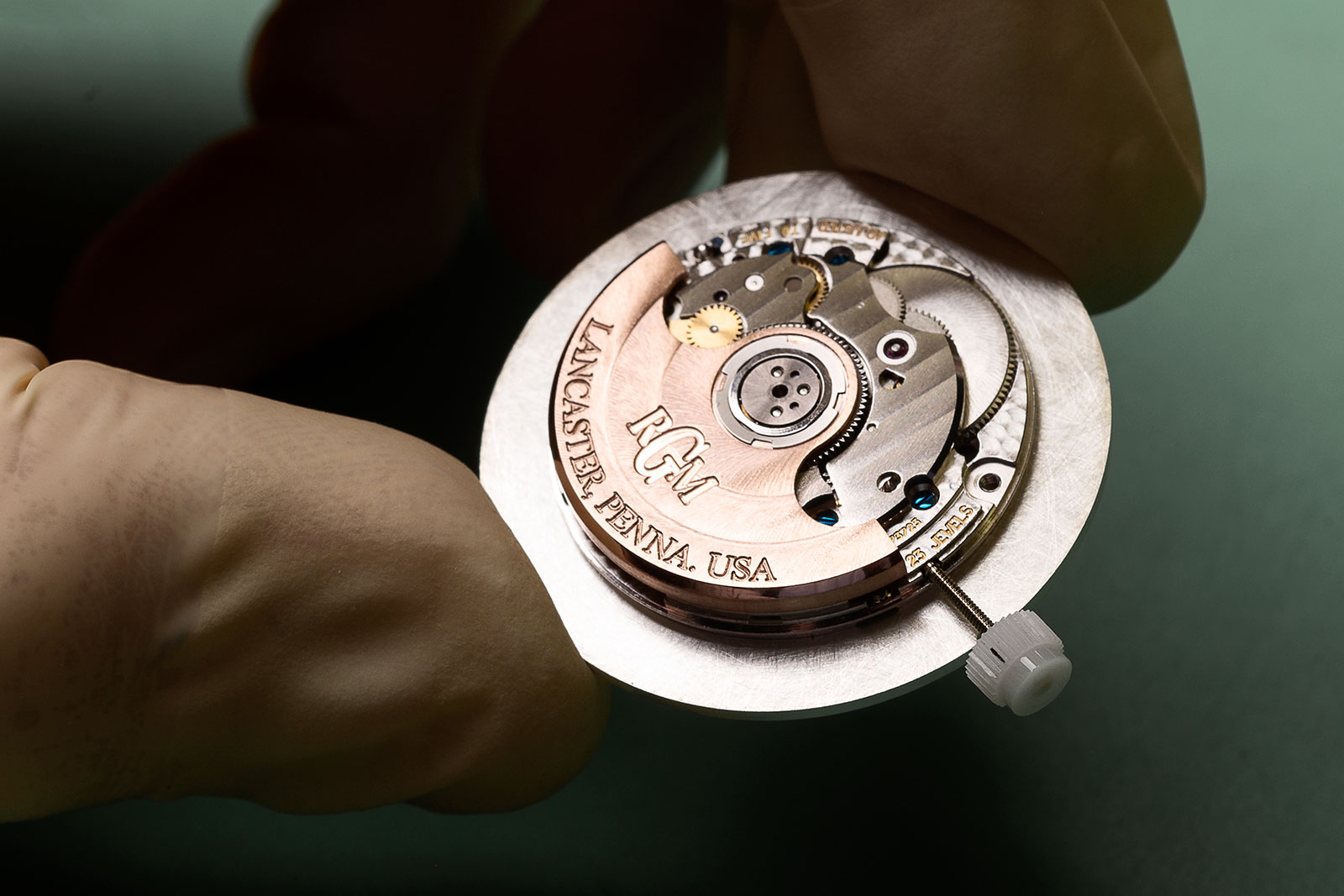 Availability: Unique piece commissioned by a client; custom dials available upon commission
Price: Starting from US$13,900 for a comparable custom order