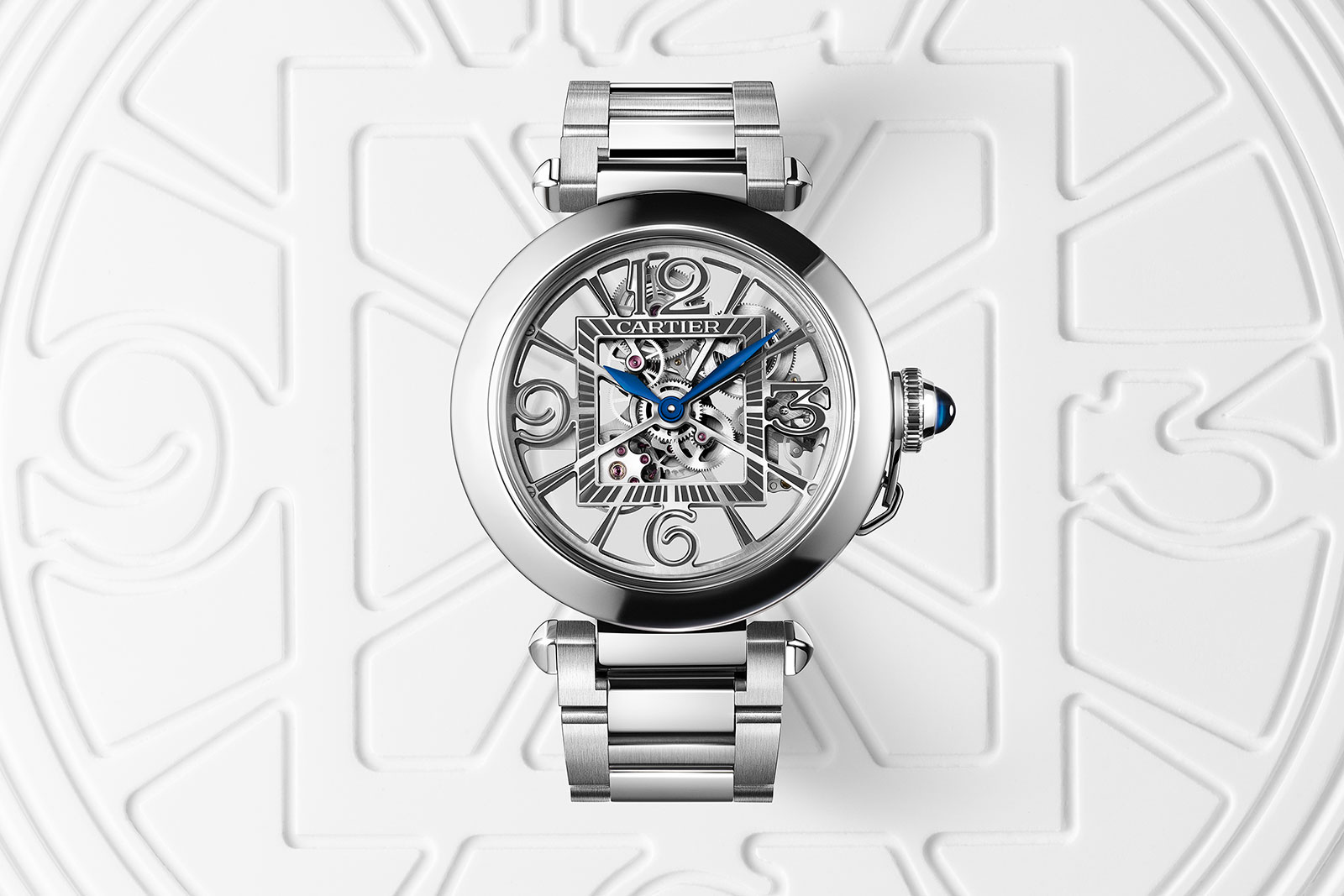 Having just unveiled the new-and-improved Pasha de Cartier in April, the Parisian jeweller has just announced an unusually generous suite of complimentary services for the owners of any Pasha watch – “regardless of the model and year of purchase” – anywhere in the world. 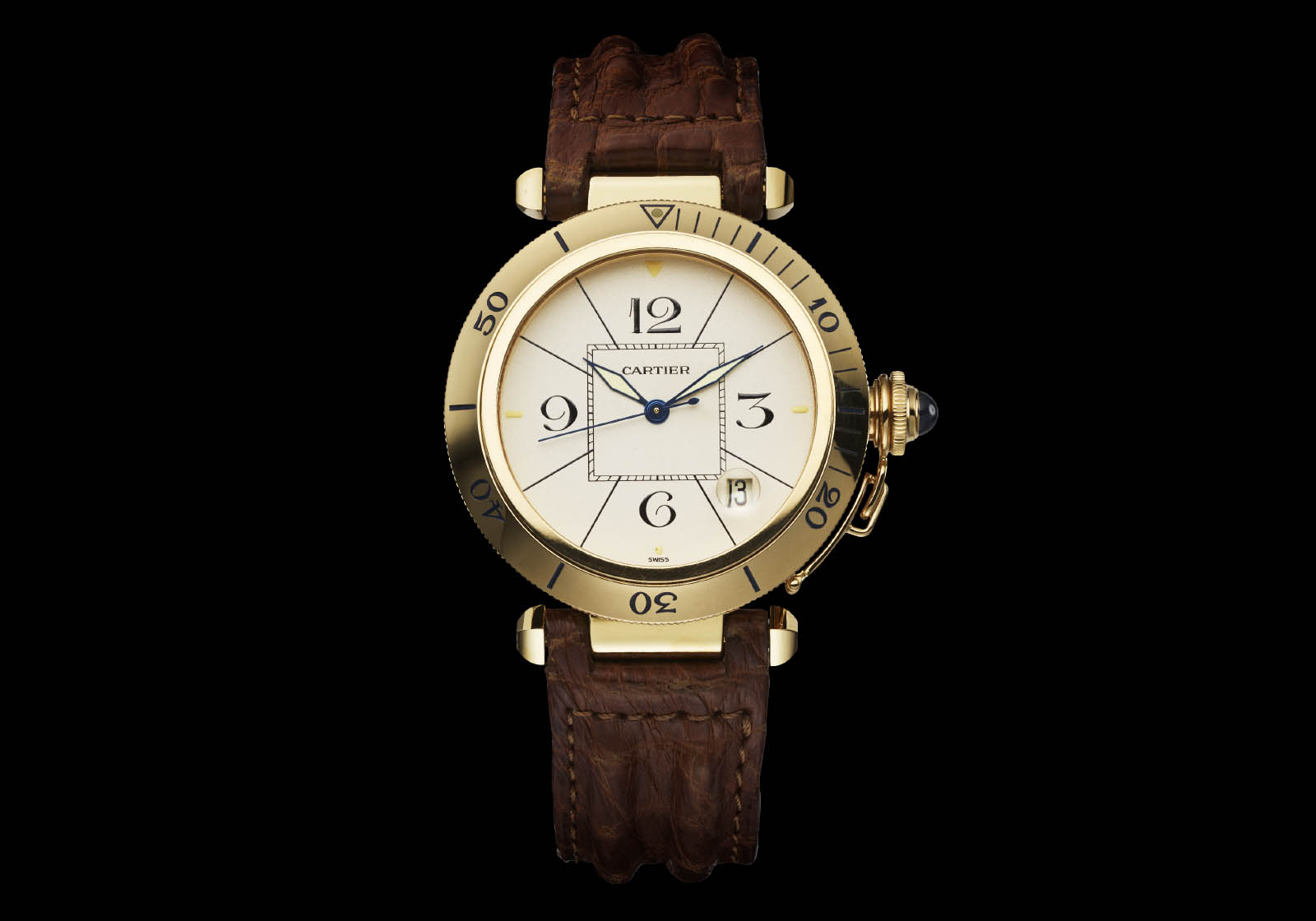 An example of a Pasha from 1985, which would also be eligible for this offer

Conceived to be part of the promotional activities for the new line, this impressive initiative covers two key amenities: servicing and personalisation.

Any Pasha wristwatch can be taken to a Cartier boutique for a diagnosis and complimentary servicing. After servicing, the watch will also benefit from the standard post-servicing guarantee. 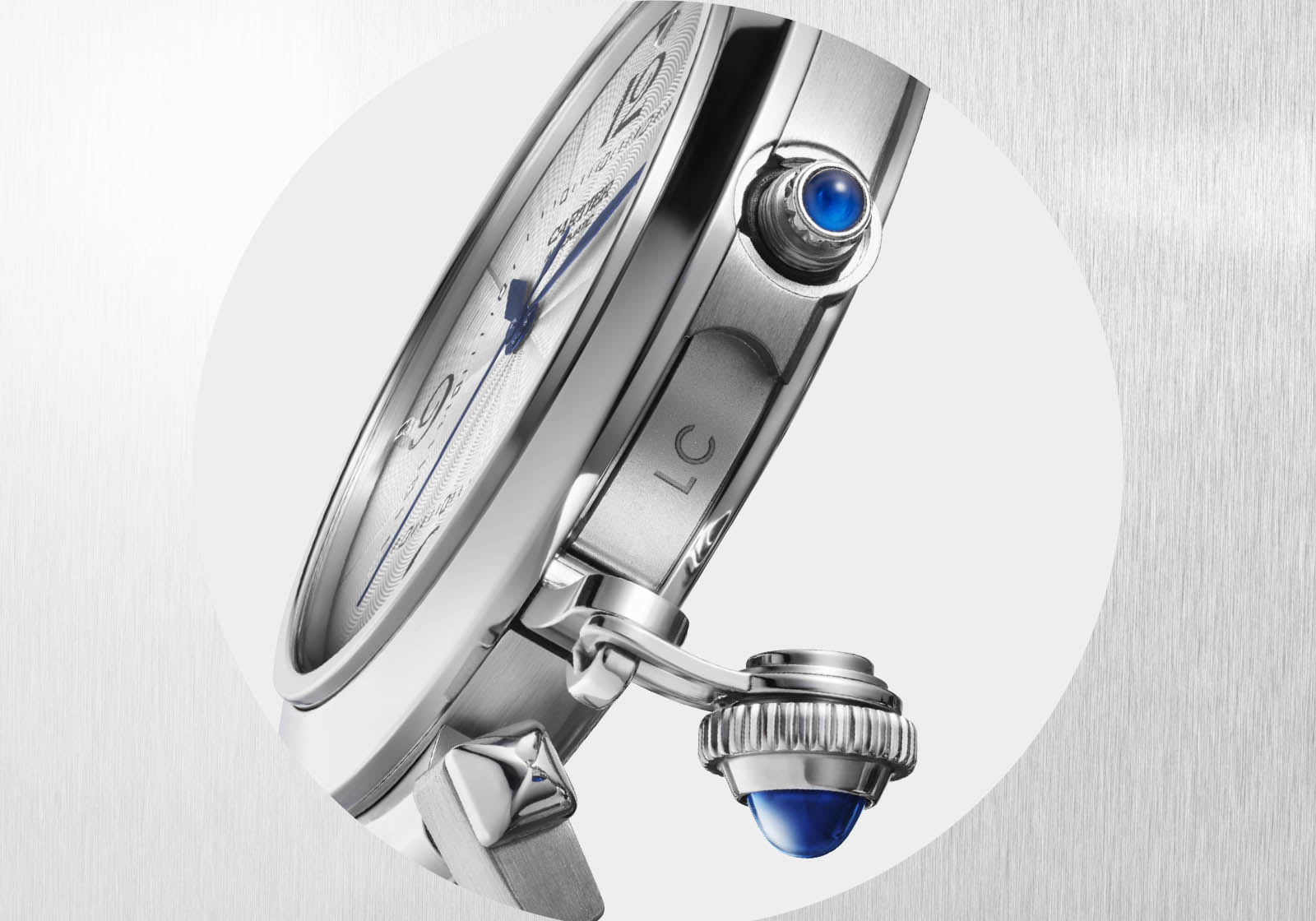 At the same time, a Pasha wristwatch can be personalised with an engraving of the owner’s initials, either on the case back or on the side of the case under the chain that links the crown cap to the case.

Cartier has not revealed how long these services will remain complimentary, but presumably not forever, so it would be prudent to make use of the offer sooner rather than later. 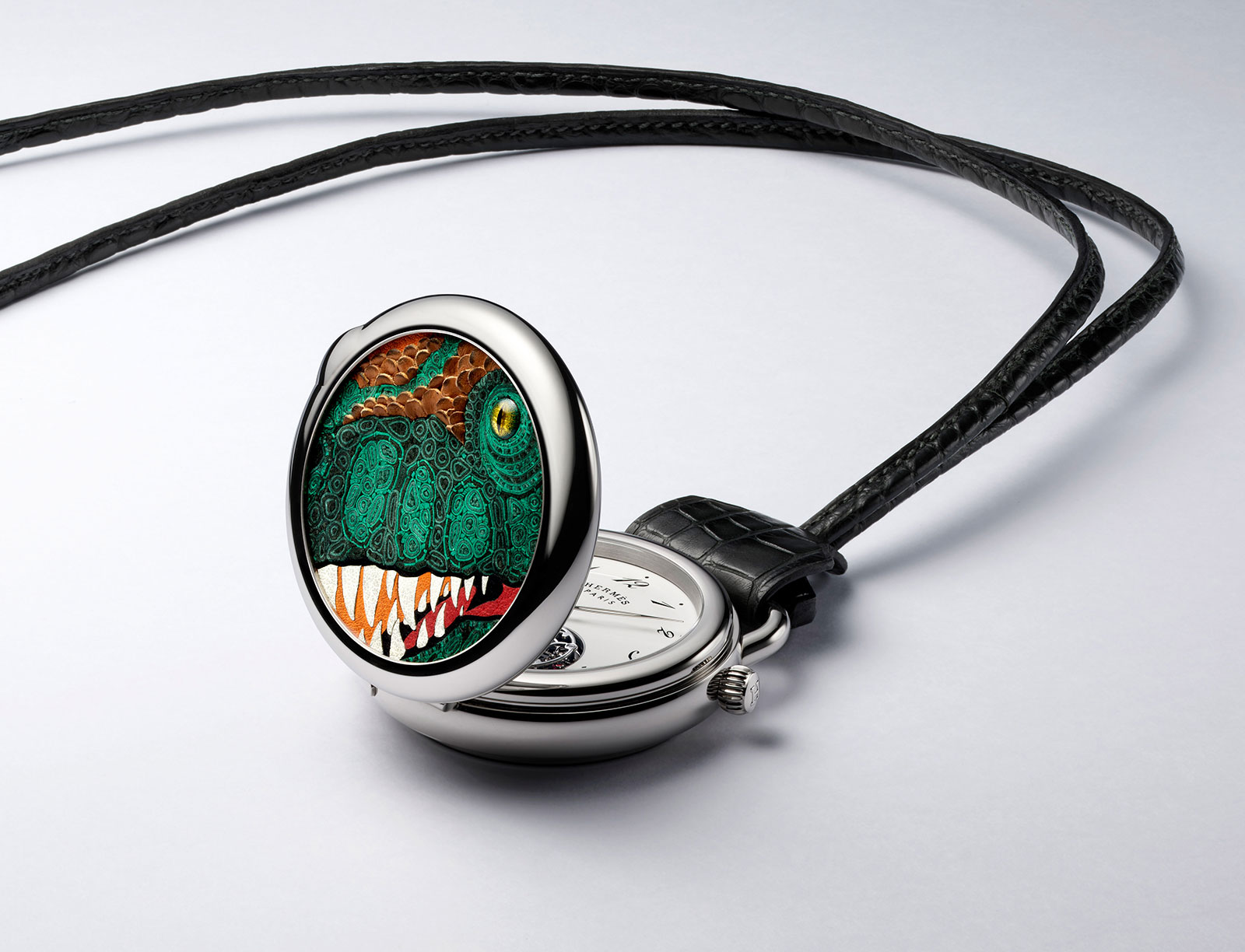 English artist Alice Shirley has been creating illustrations for Hermès to reproduce on its scarves since 2012. Typically imaginative motifs of flora and fauna, two of Ms Shirley’s illustrations have made their way onto Hermès wristwatches. And now the Parisian leatherwoods maker has just revealed the third, and most impressive, instalment of this crossover – the Arceau Pocket Aaaaargh! Minute Repeater.

A pocket watch boasting a minute repeater and tourbillon, the Aaaaargh! is decorated in leather mosaic and marquetry – and a very large eyeball in grand feu enamel. It’s named after the sound a Tyrannosaurus rex presumably made, and continues the phonetic naming conventions of Ms Shirley’s earlier watches, which were the Slim Hermès Grrrrr! with a bear motif and the Arceau Awooooo featuring a howling wolf. 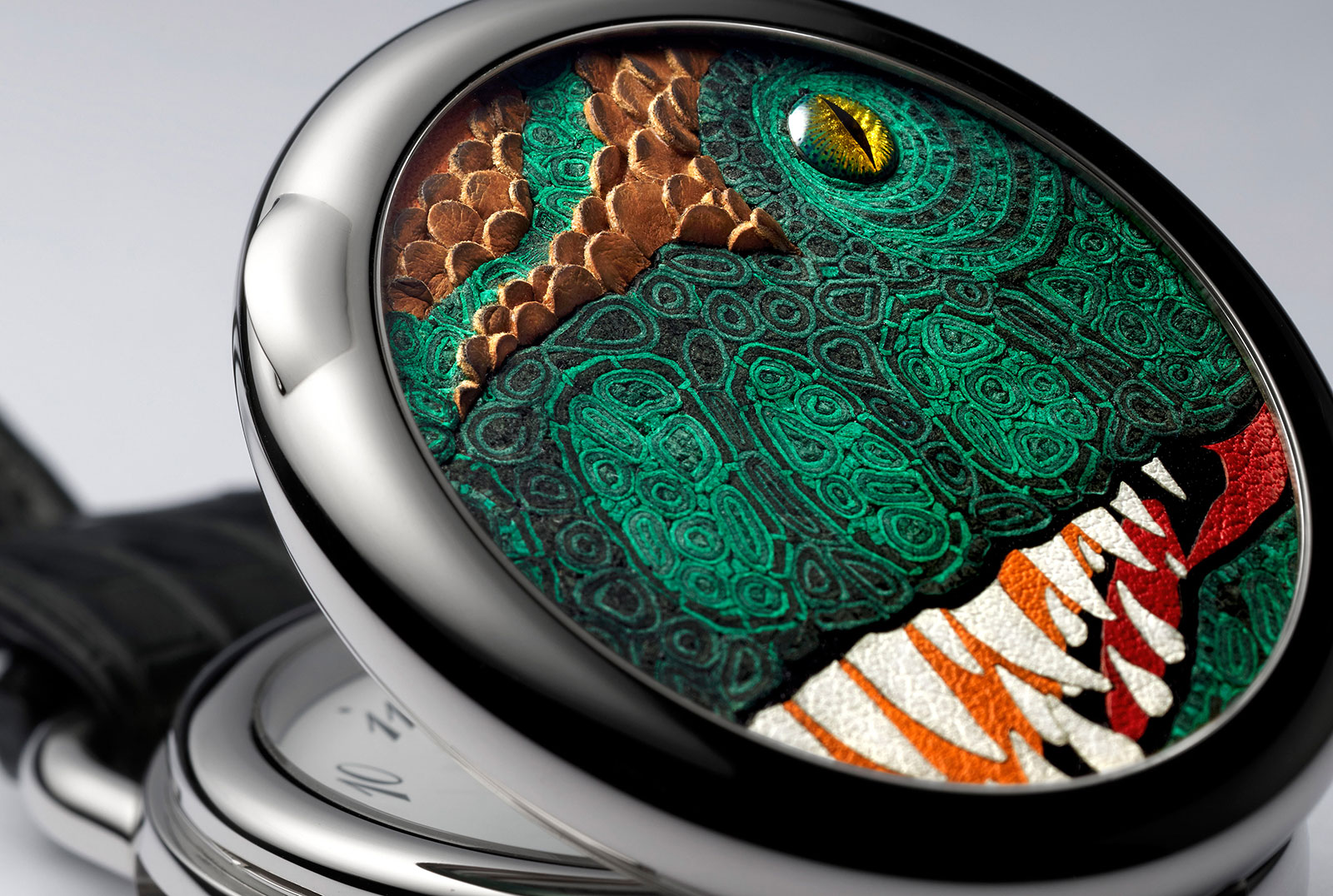 Unlike the previous two Alice Shirley watches that were time-only, the Tyrannosaurus is a pocket watch – unusual in itself – and also combines a minute repeater and tourbillon. In addition to the complicated mechanics, the motif is executed more elaborately than on the earlier watches, which admittedly were substantially more affordable, most notably with the three-dimensional enamel eye and intricate leather inlays.

The result is an intriguing, fun, and imaginative watch that is very much in keeping with Hermès’ quirky, elegant, and expensive house style. Compared to the typically safe and practical high-end complication, the Arceau Aaaaargh! is refreshing. 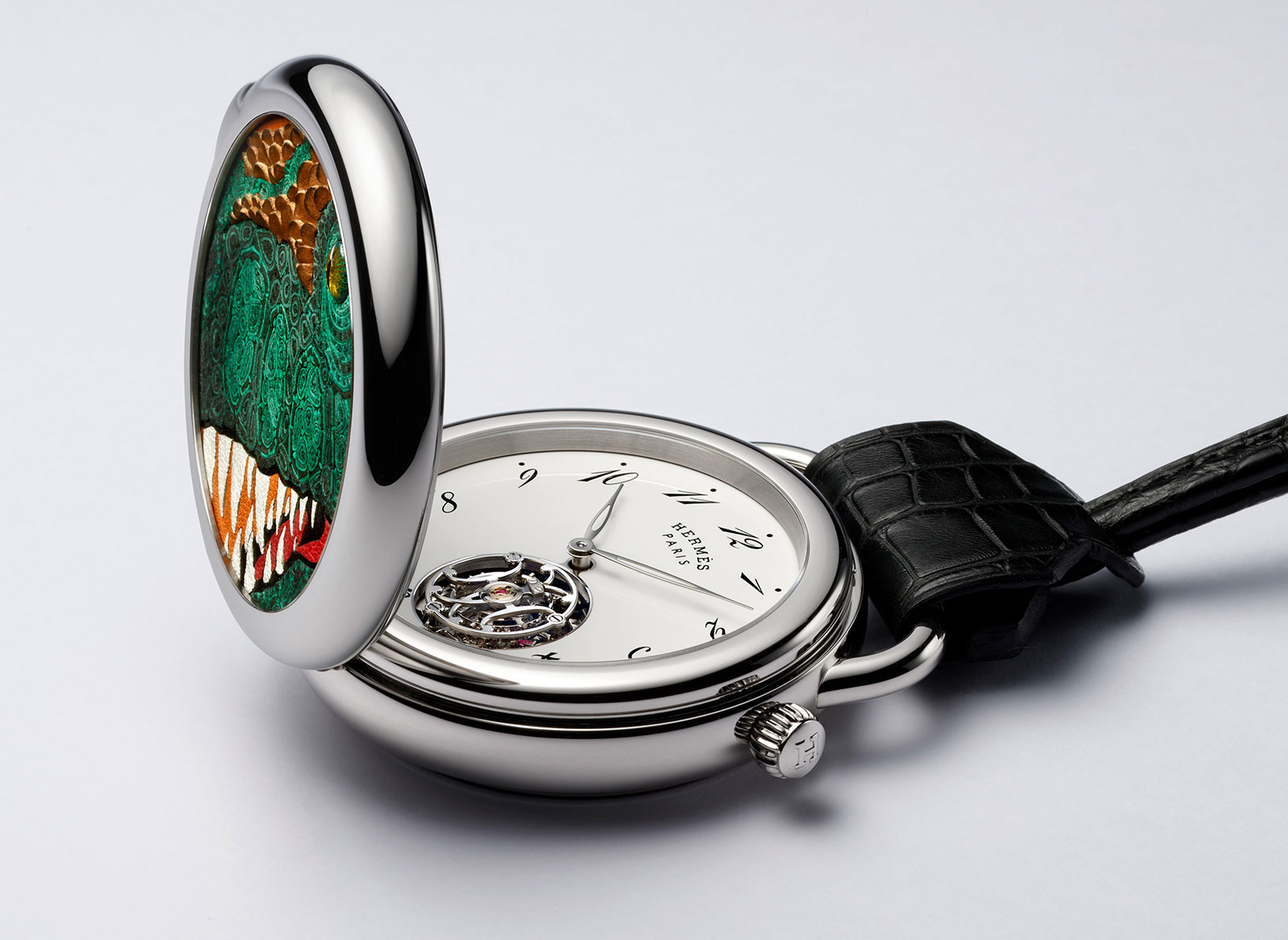 While the motif itself is already captivating in its whimsy, the unique combination unusual leather and enamel elevate its appeal, as it captures the Hermès’ specialty, differentiating it from the competition.

It is indeed special, but clearly catered to a narrow segment of Hermès fans, and maybe a handful of watch collectors. Appropriately the Aaaaargh! will be produced in just two example , both one-off creations, in white and pink gold respectively. Though arguably less relevant given the audience, at US$338,000, it is priced within the ballpark of comparable highly-complicated, metiers d’art watches.

The most striking element of the Aaaaargh! is the front lid decorated with a T-Rex in leather mosaic and marquetry. The majority of its head (namely the green and brown portions) is composed of leather mosaic – artfully applied tiny leather fragments, which appear complicated and messy up close but three-dimensional and vivid at arm’s length. The Tyrannosaurus’ open jaw, however, is composed of larger pieces, which is leather marquetry.

And the other highlight is the eye – a glossy, domed cabochon made of fired enamel that engages with the light to create a lively look. 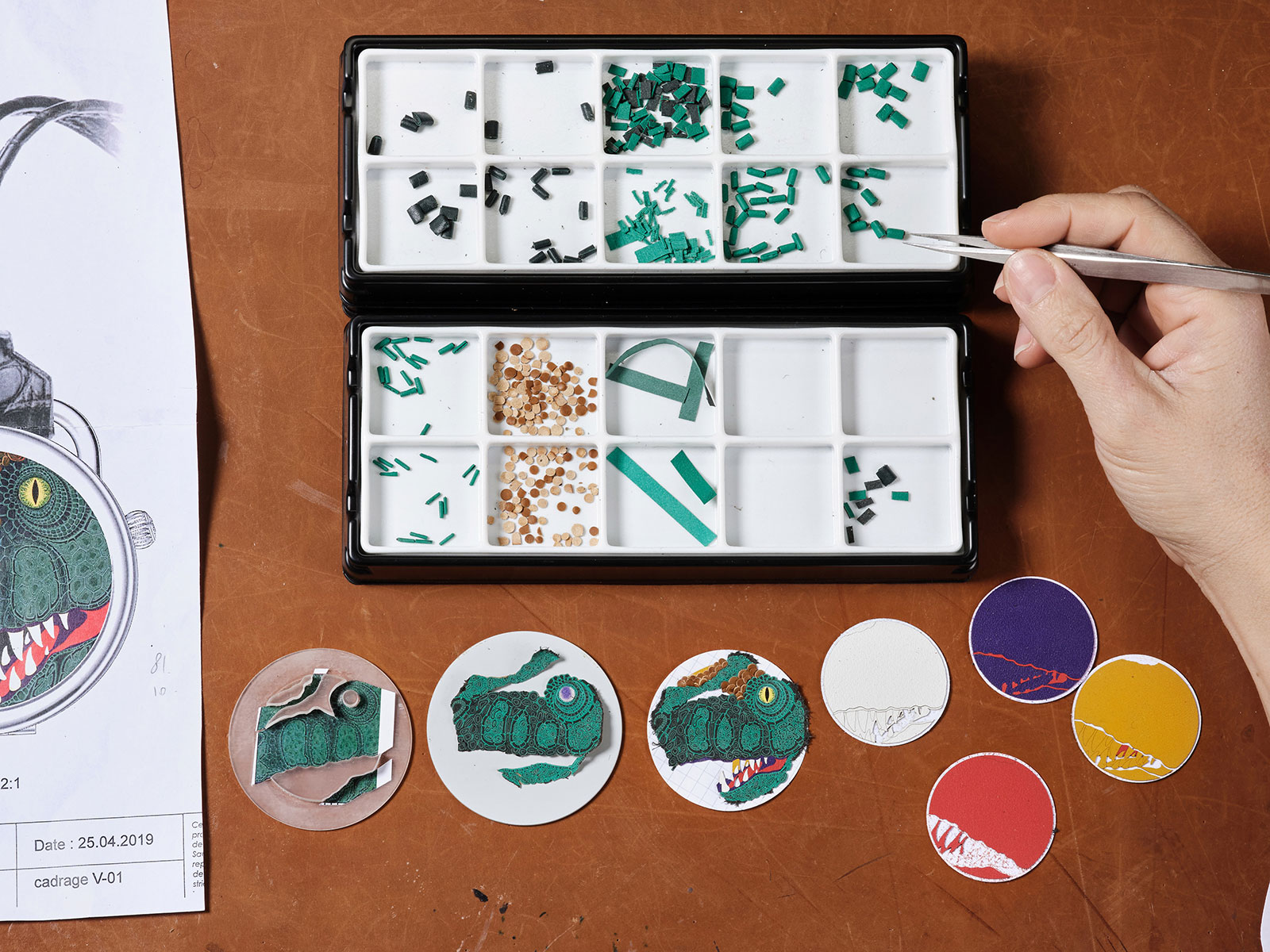 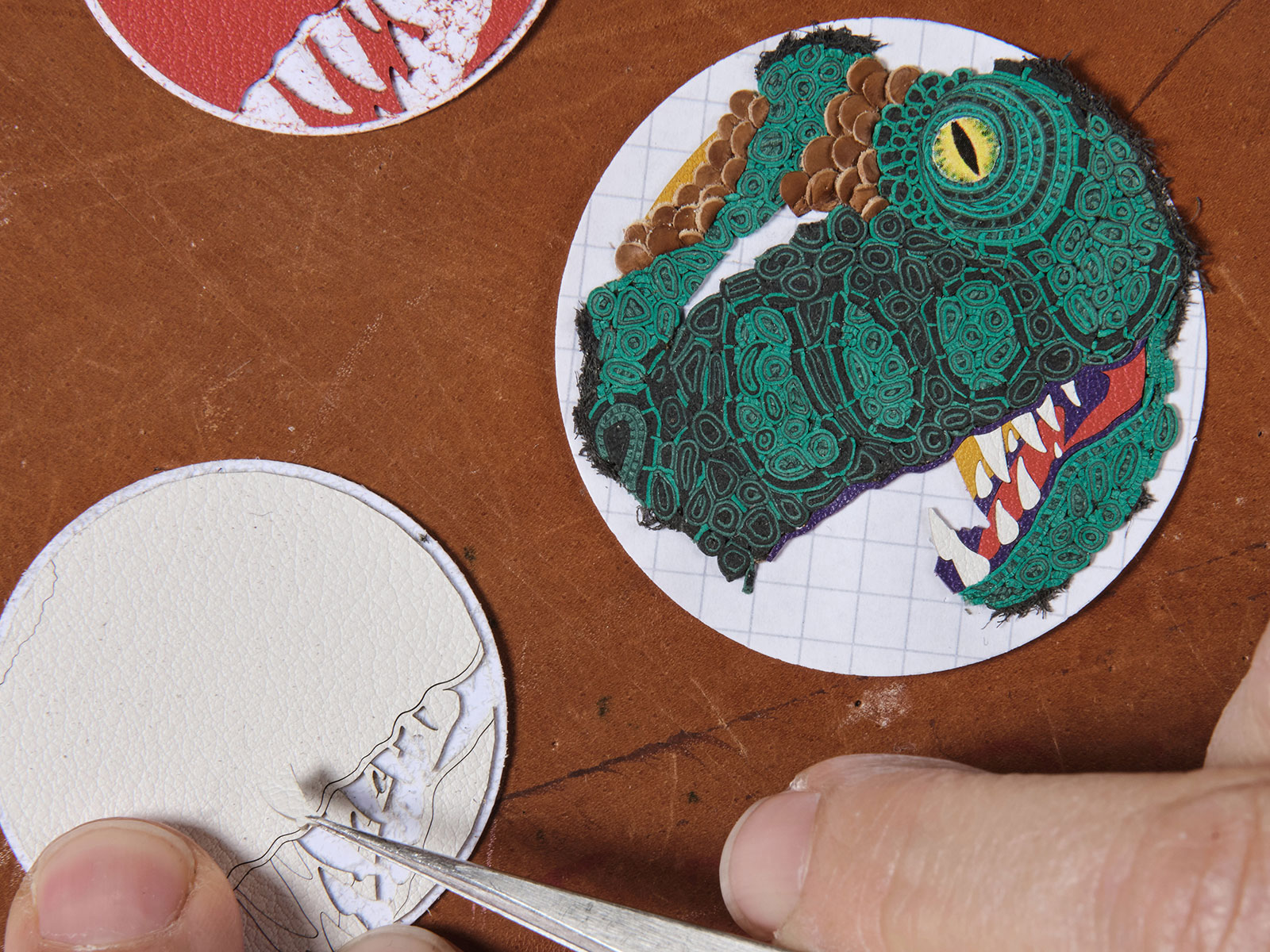 Cutting and assembling the leather for marquetry 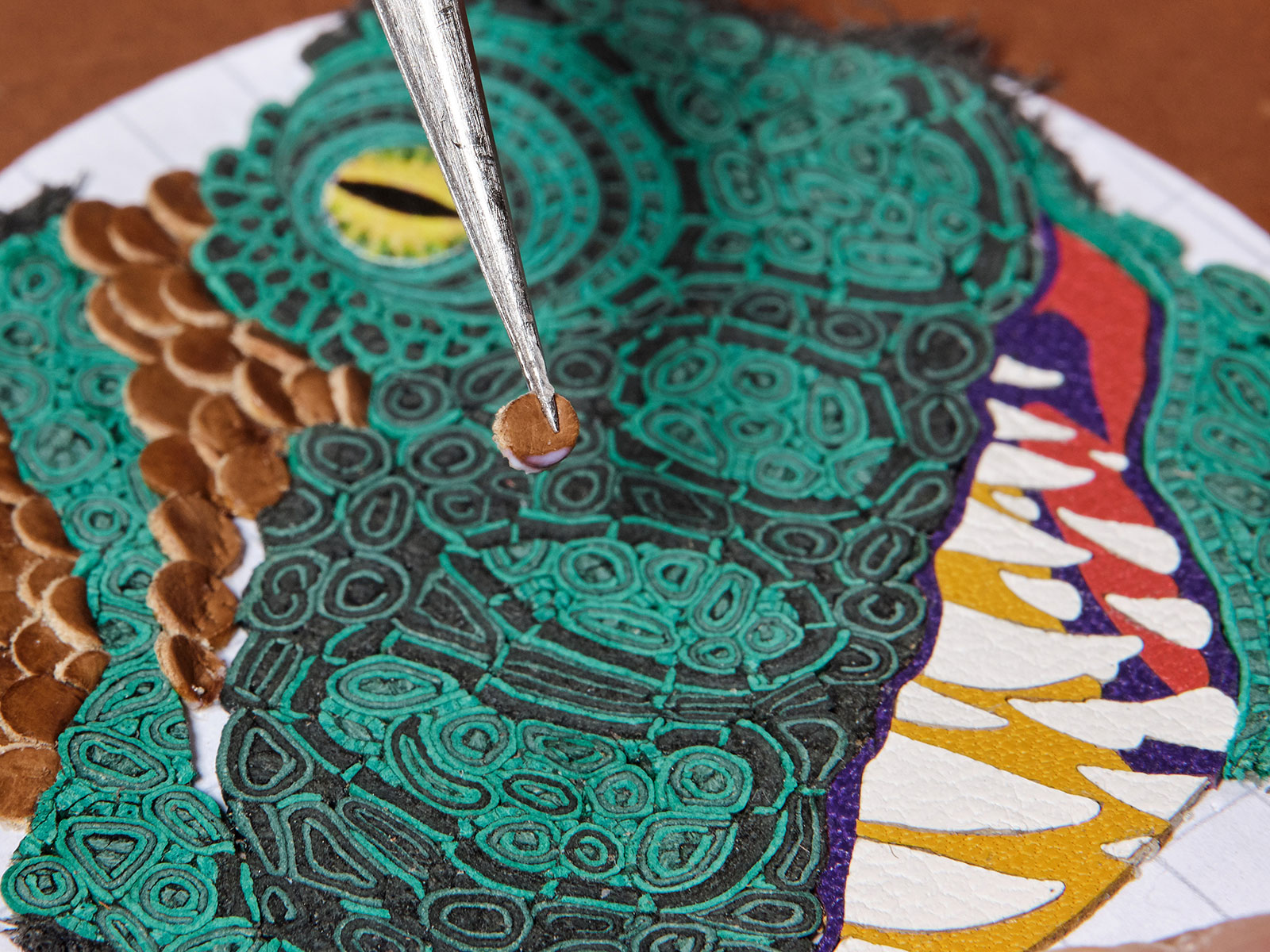 And a subtle watch

Underneath the elaborate cover is a clean white dial with Hermès’ take on traditional Breguet numerals, and an opening at six o’clock for the flying tourbillon that also has the brand’s signature double “H” cage. While seemingly simple, the dial is actually a solid-gold plate covered with fired white enamel. 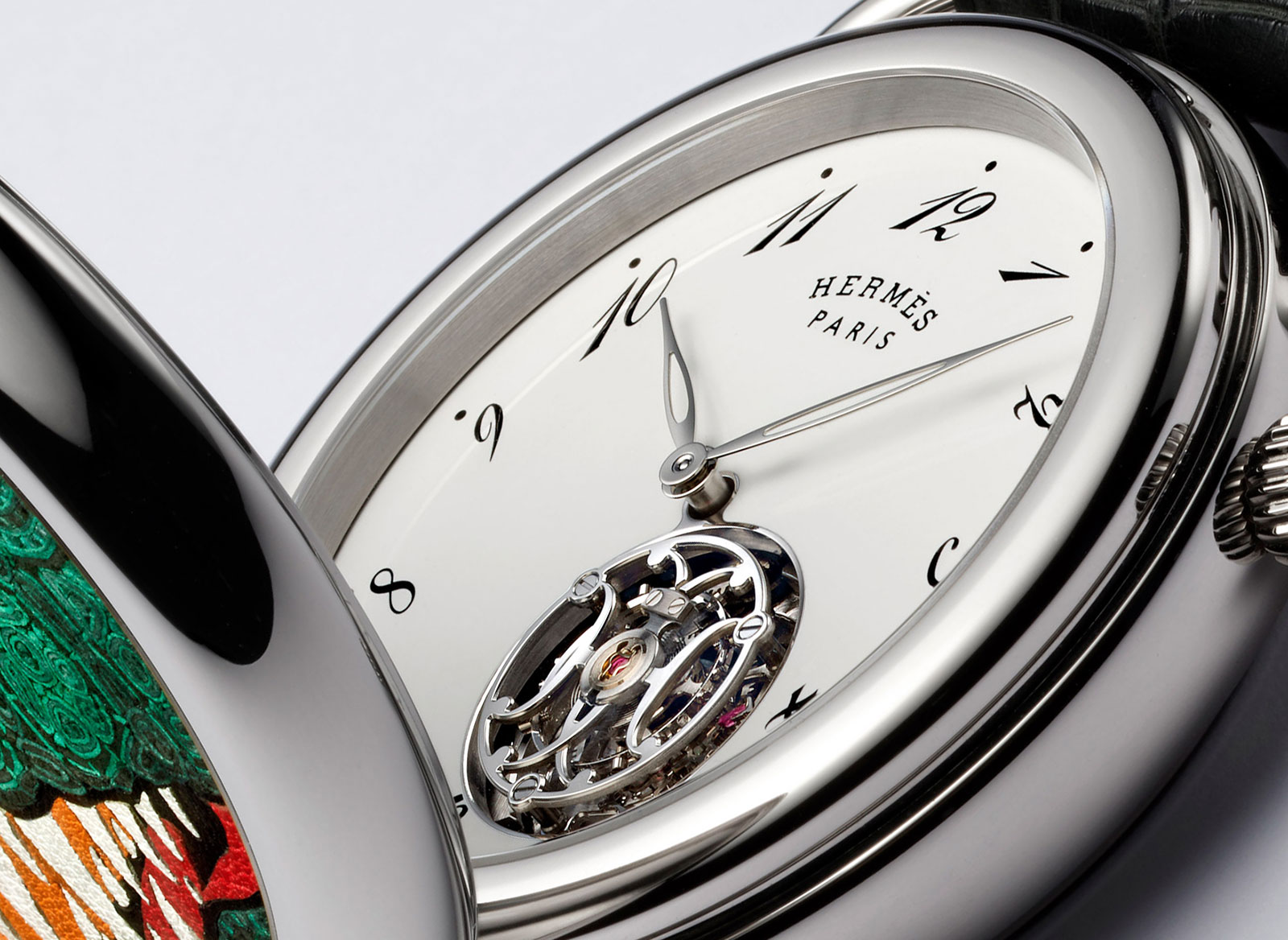 And inside is the cal. H1924, the same calibre found in the recently-launched Arceau Lift that is produced by Geneva complications specialist Manufacture Haute Complications (MHC). Here the movement has been customised for the dinosaur theme: the bridges are open-worked, with the barrel bridge incorporating a stylised Tyrannosaurus rex silhouette. 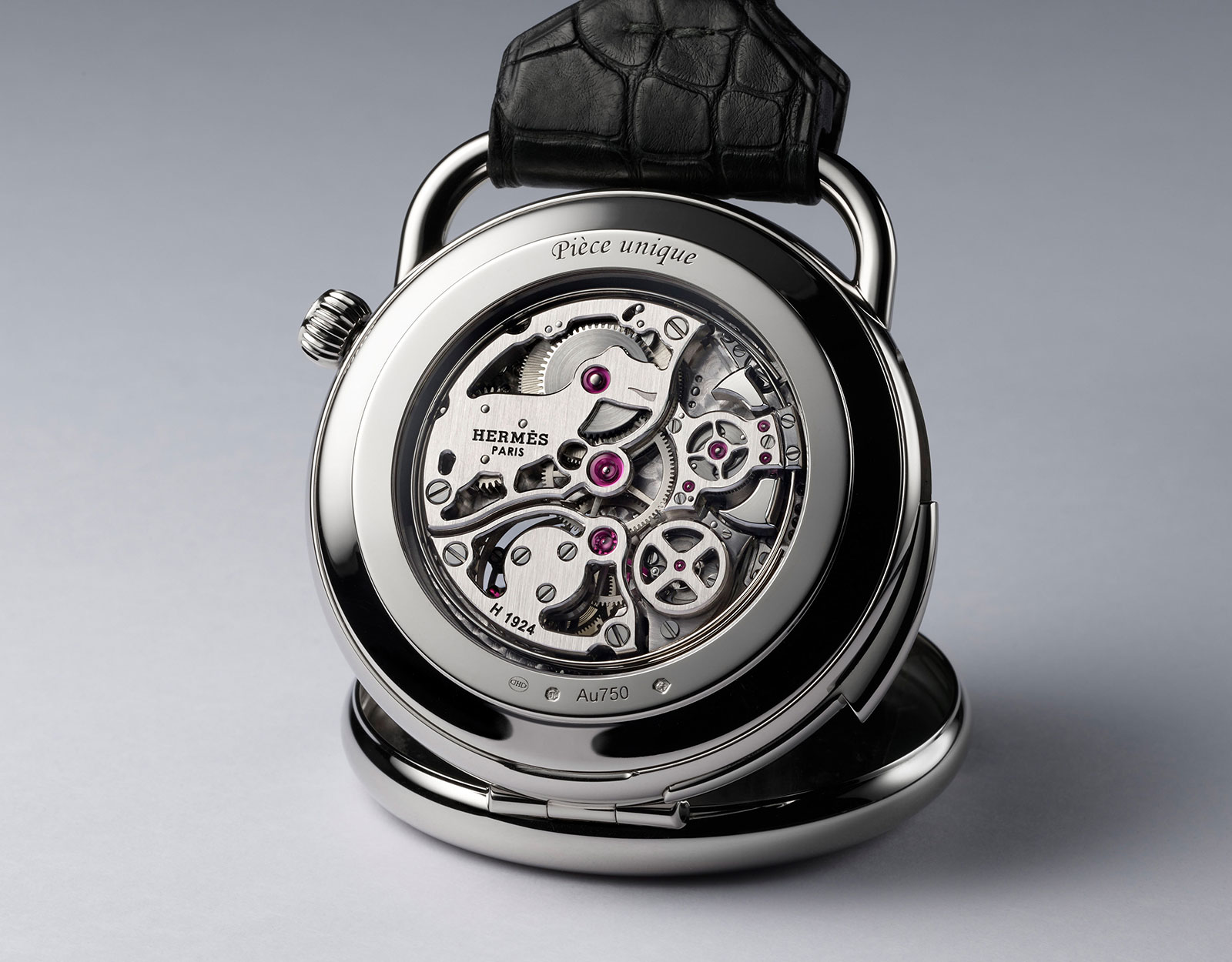 The finishing approach is clean and modern, with linear brushing on the rhodium-plated bridges, but enhanced with wide, polished bevels on the edges. Notably, the edge bevelling includes are two inward angles around the centre-wheel jewel, a decorative flourish that has to be performed by hand. 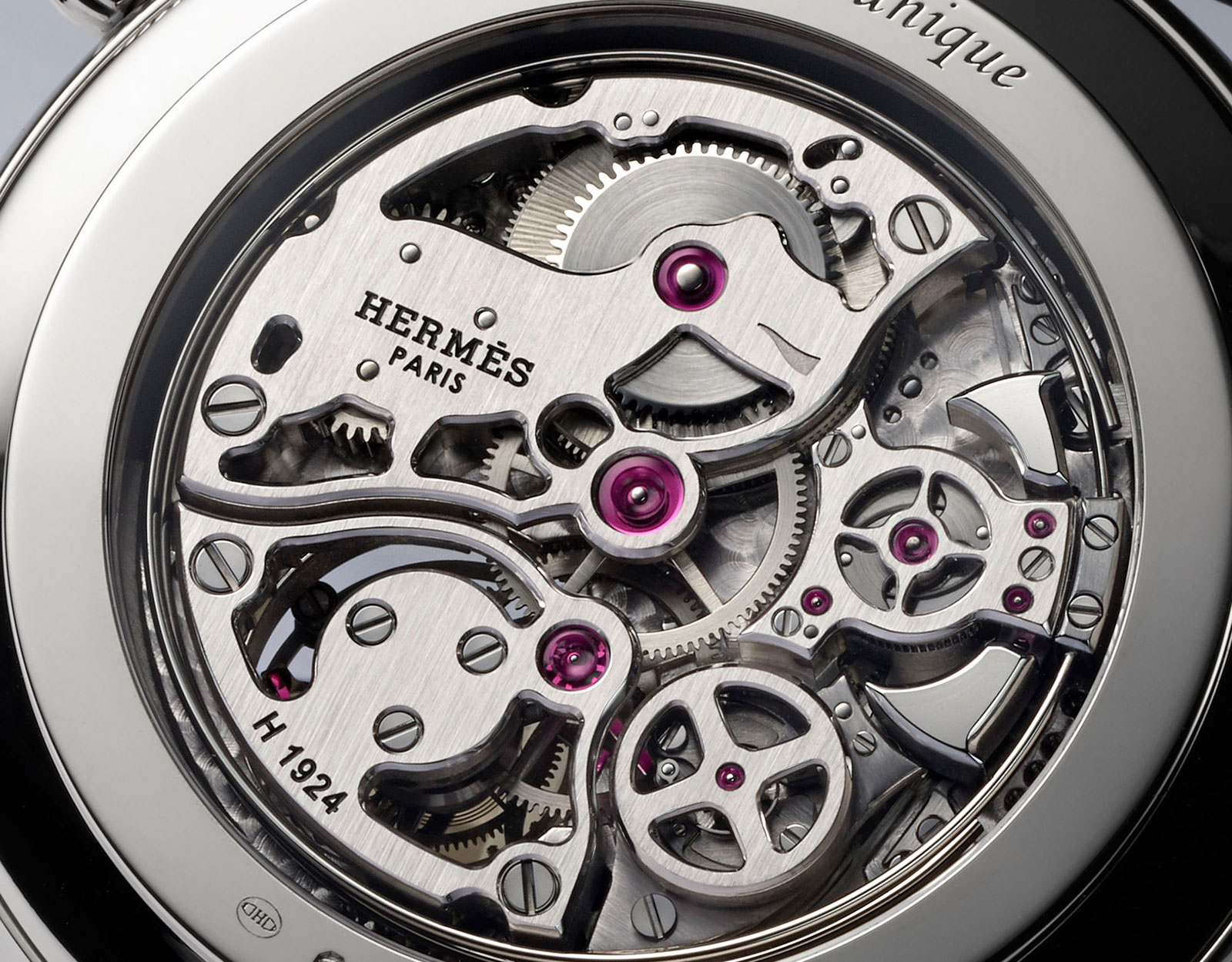 Limited edition: Two unique pieces, in white or rose gold respectively
Availability: Upon request at Hermes boutiques
Price: €300,000; or US$338,000 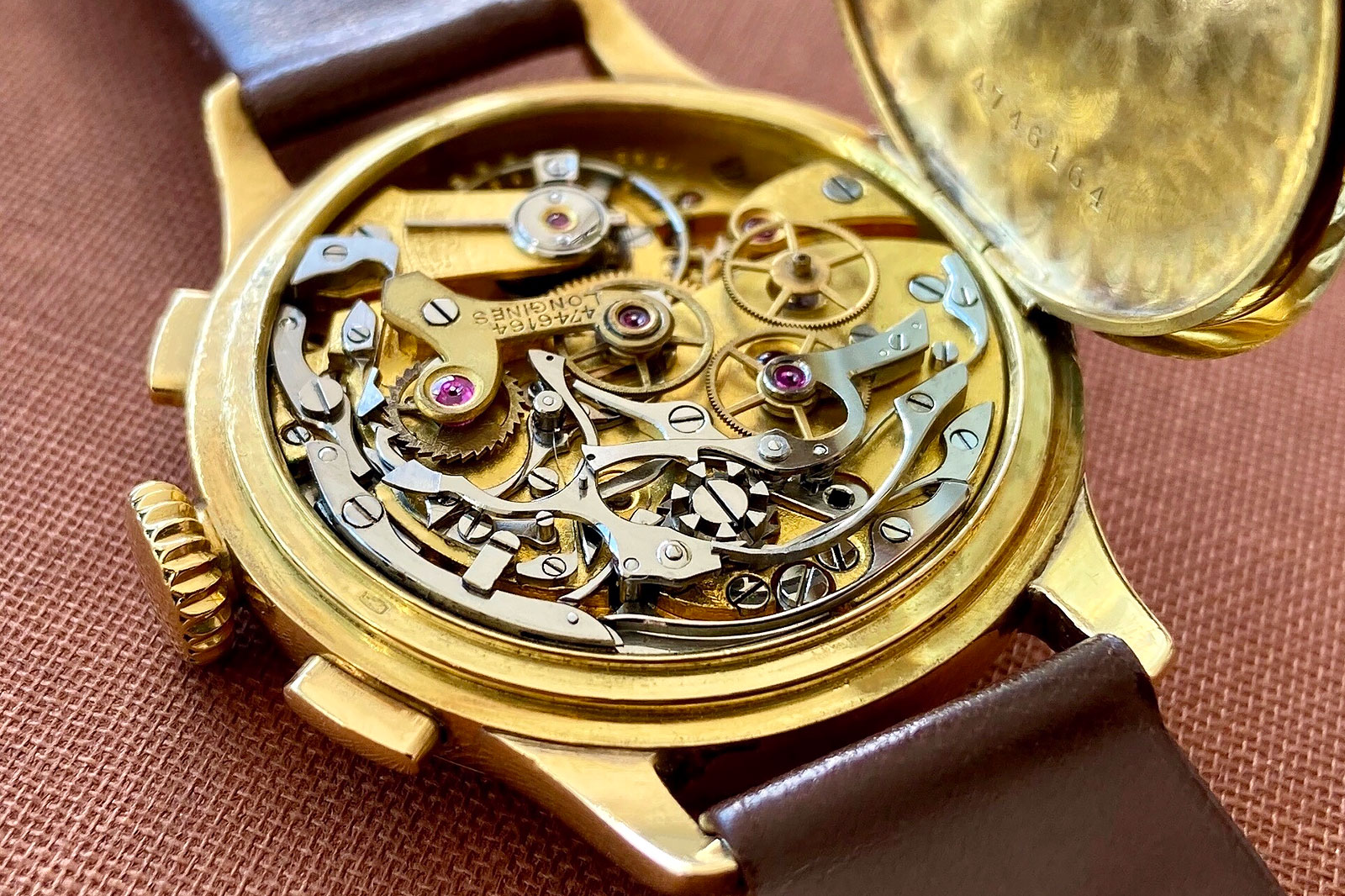 As a collector, I find myself in the rather sparsely populated niche of observatory chronometers. Due to Longines’ unparalleled history in precision timekeeping, the brand became a long-standing, personal favourite. Notably, competition chronometer movements, like the 30B with its off-centre construction and the rectangular 360, strike all the right chords with me.

Along the way, I inevitably bumped into Longines’ outstanding in-house chronograph calibres – in chronological order, the 13.33Z, 13ZN, and 30CH – which opened a new door away from my focused, chronometer-centric journey as a collector. And it also led me to a discovery that rewrites horological history, one that gives Longines the title of having produced the very first flyback wristwatch chronograph, as well as the first chronograph wristwatch with two pushers. 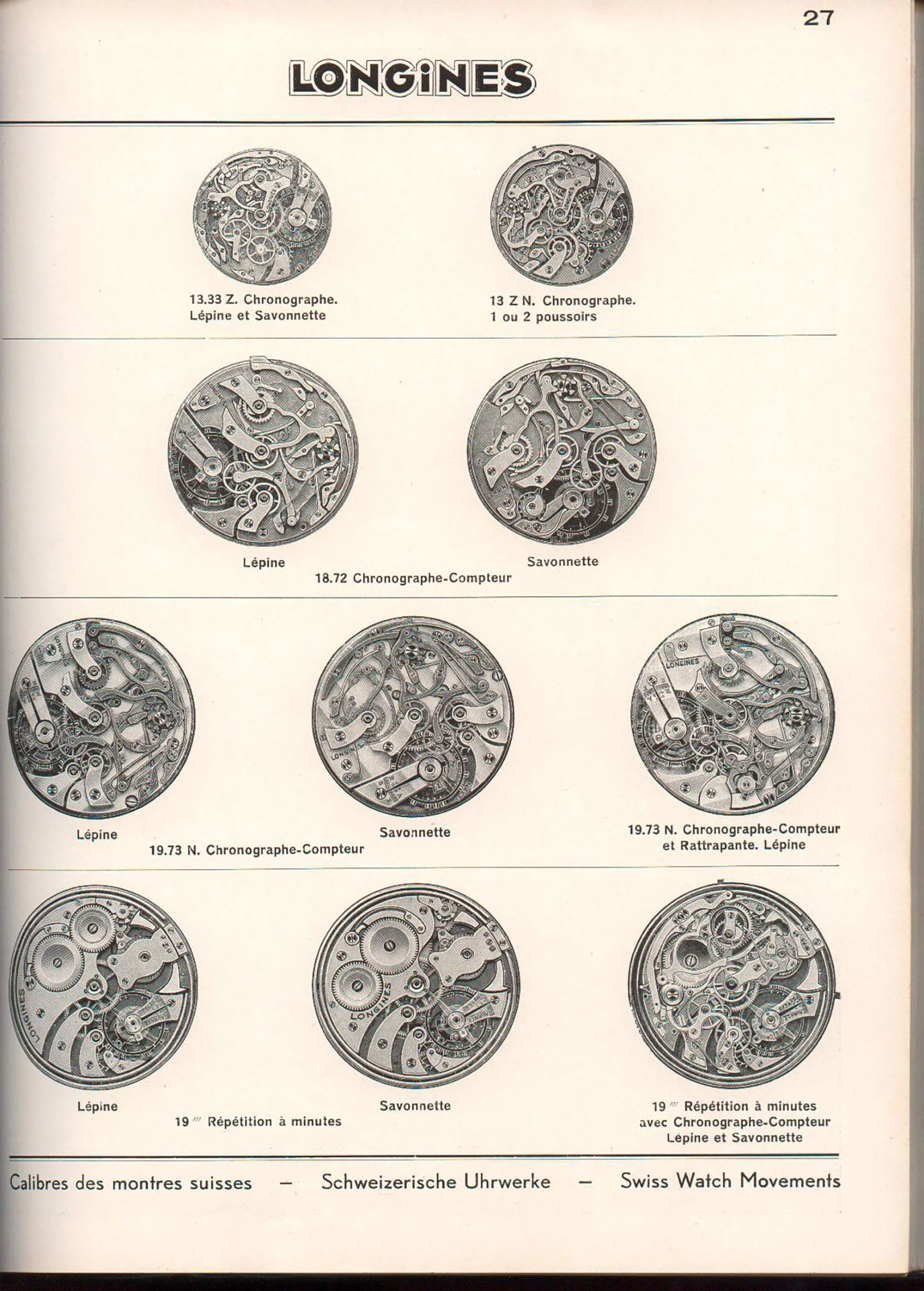 A catalogue page showing various Longines chronograph movements in the 1930s, with the topmost pair being for wristwatches, and the others for pocket watches

Though Longines had produced several remarkable wristwatch chronograph movements, a two-pusher flyback chronograph powered by the 13.33Z had become the object of my desire. A watch that was only produced in minuscule quantities and remains largely unknown to even the most discerning of collectors, with only eight examples known the market. A long and winding quest ensued that ultimately resulted in the opportunity to acquire an exceptional example from a private collection in Germany. That particular piece was tucked away for over a quarter-century, well hidden from the all-seeing eye of the internet and social media.

It was clear from the get-go that I was looking at an extremely early example of the 13.33Z with a flyback function, but little did I fathom its horological significance, which would reveal itself after more research. 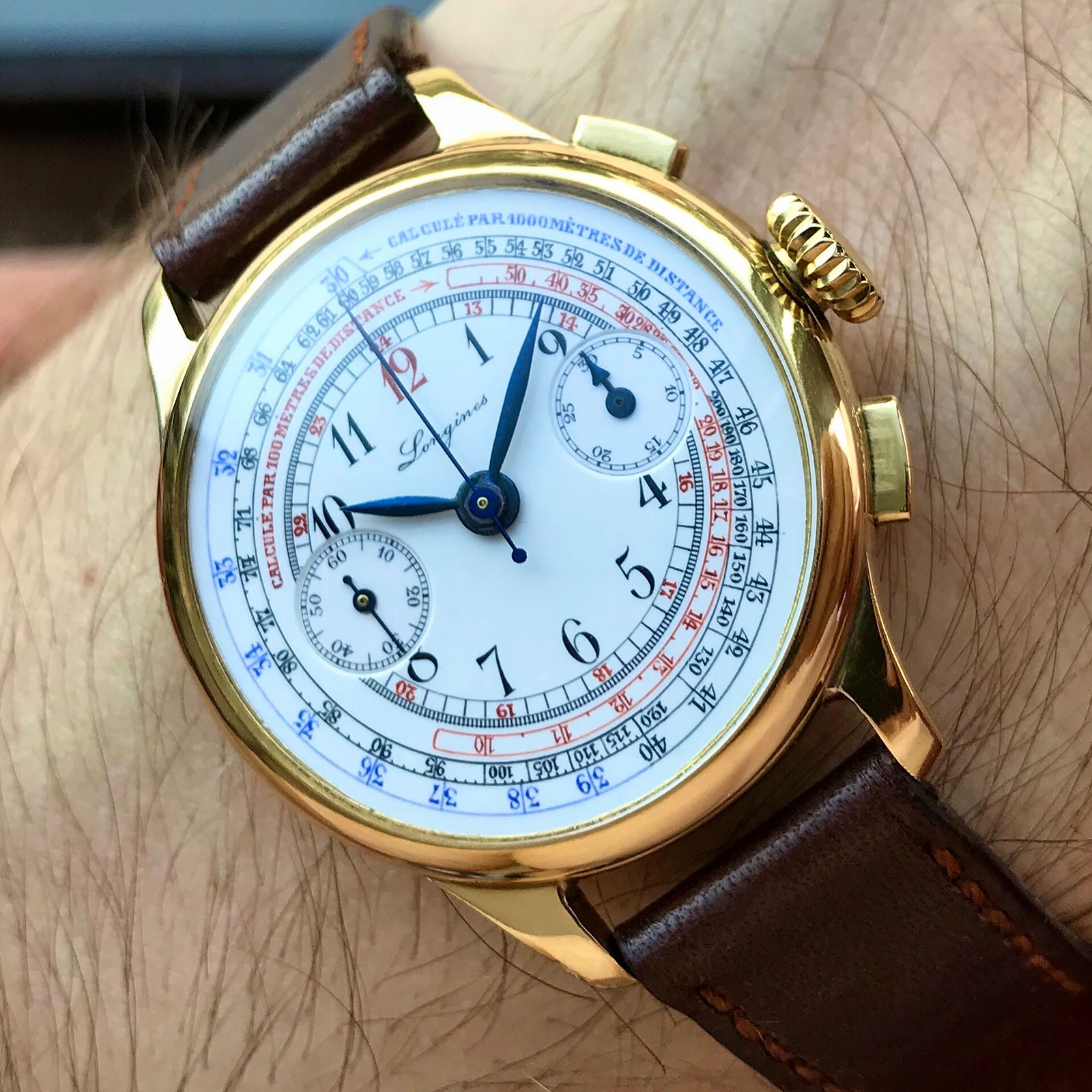 Chronograph connoisseurs consider this unsung variant of the venerable 13.33Z as the technical pinnacle of vintage wristwatch chronographs, excluding more complicated split-second movements. The reason behind that is rooted in the technical merits of the movement, but also the fact that its development was well ahead of its time.

Most wristwatch chronograph calibres, including Longines’ fabled 13ZN or the well-regarded Valjoux 72, feature what is widely known as the semi-instantaneous minute recorder – the elapsed minutes hand creeps forward ever so slightly before it jumps to the next minute marker. In contrast, a true instantaneous minute hand that jumps with a crisp snap was historically only found in high-grade pocket watches.

However, the 13.33Z – introduced in 1913 as one of the first wristwatch chronograph movements – retained the sophisticated instantaneous-jumping mechanism found in pocket watches. Ultimately, the complex mechanism fell victim to cost-saving measures, and subsequently, the semi-instantaneous, or even less refined “dragging”, indicator became the de-facto standard for mass-produced chronograph wristwatch movements. 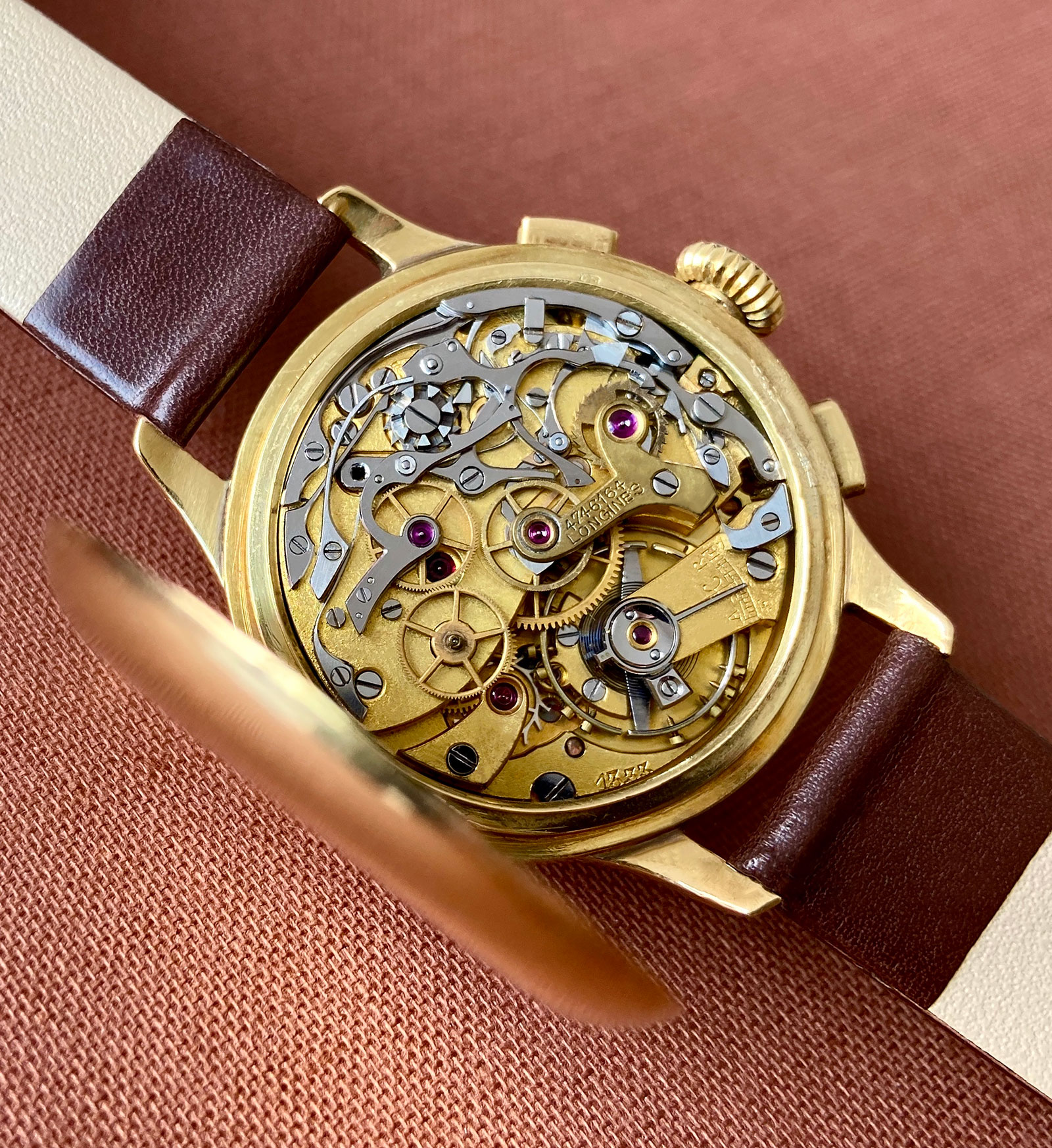 Naturally, the advantage of an instantaneous jumping minute recorder might appear negligible, more of an intellectual exercise in watchmaking than a solidly practical feature. However, one needs to keep in mind that the minute-change sequence of a semi-instantaneous chronograph – where the minute-register hand moves from one hashmark to the next – can take up to three seconds.

If a semi-instantaneous chronograph is stopped in the vicinity of a full, elapsed minute, it is often unclear whether the hand has already moved forward or not, leading to potential ambiguity in reading the elapsed time. A true instantaneous, jumping minute recorder completely eliminates the problem – giving it a tangible advantage in time measurement.

Early chronographs with the 13.33Z featured a co-axial mono-pusher on the crown that controlled the chronograph function, and were either pin- or stem-set. Later examples had the single-pusher at two o’clock and were uniformly stem set. An exceedingly low number of 13.33Z movements were equipped with an additional flyback function, an upgrade that required a more sophisticated two-pusher configuration.

Longines filed a Swiss patent for the flyback mechanism on June 12, 1935, and the patent was granted March 31, 1936 as Brevet 183262. Interestingly, the present watch predates the patent application by an astounding six years.

The half-dozen years between production and patent indicates that the 13.33Z flyback was a testbed for the flyback functionality, which was subsequently commercialised in its successor, the well-known 13ZN. The experimental character of the present watch can also be derived from the location of the pushers. Upon closer examination, it is noticeable that the four o’clock pusher sits closer to the crown than the two o’clock pusher – an inevitable technical concession as a result of adding a novel function to an existing movement layout. 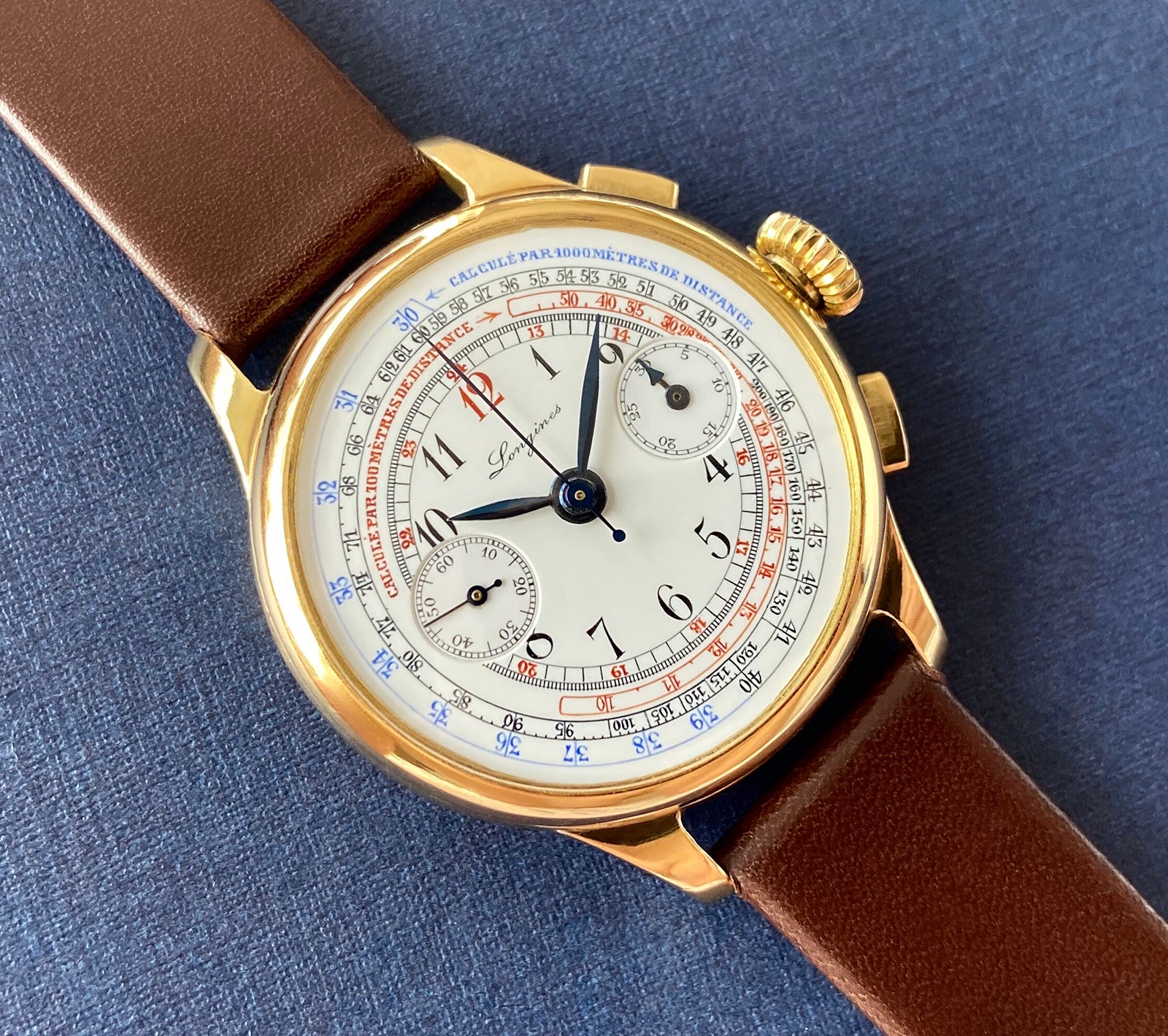 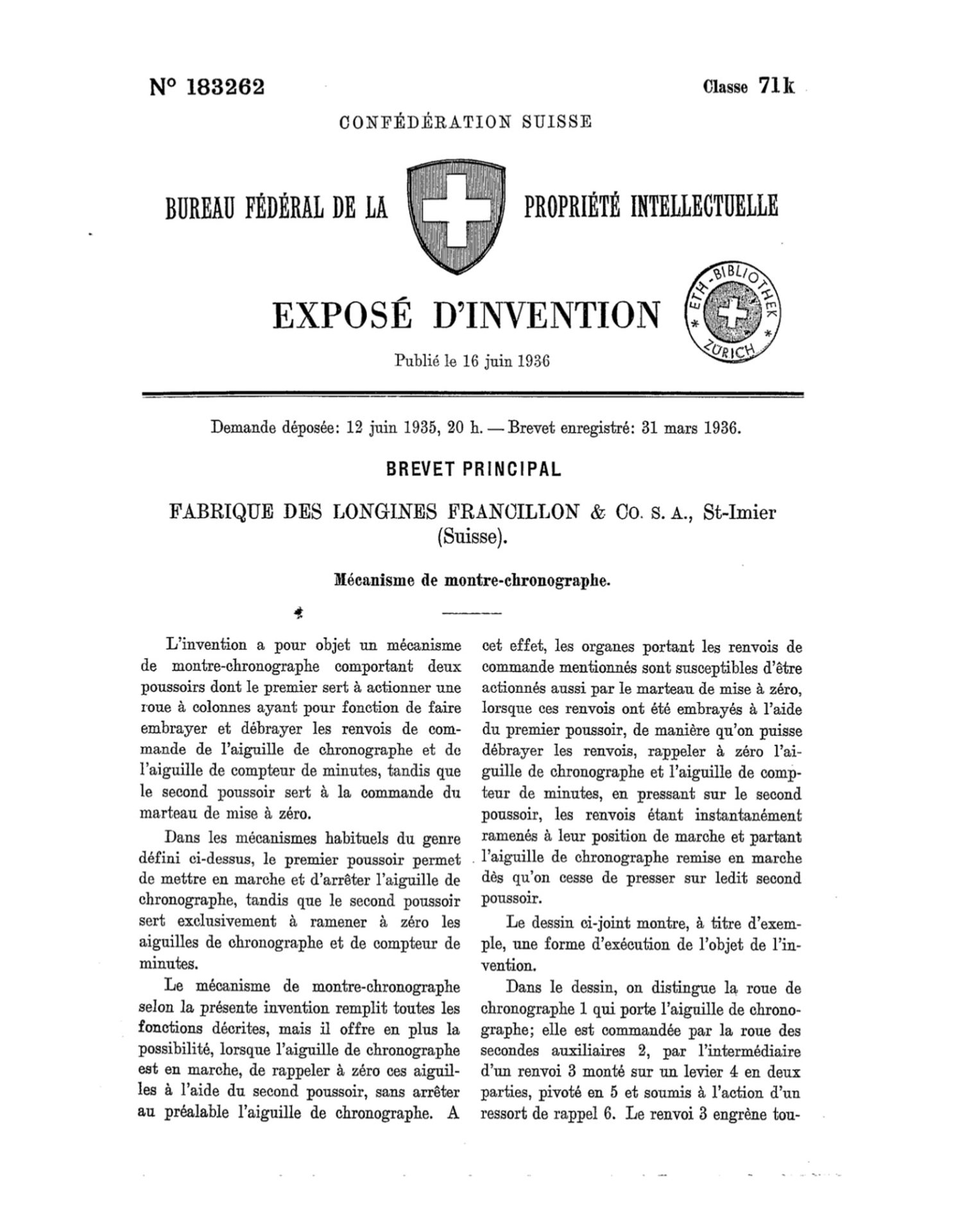 Swiss patent 183262 granted to Longines for its flyback mechanism, which depicts a modified Valjoux 22GH ébauche, referred to as the cal. 15”’ by Longines

Ahead of its time

Considering that this example of the 13.33Z left the Longines factory in 1929, it accomplished several “firsts” in horology, thereby refuting various, widely-held notions:

Further, the 13.33Z with flyback is the only-known wristwatch chronograph movement produced before the Quartz Crisis that features a flyback function in addition to an instantaneous minute recorder, a feat that was only accomplished in the modern-day by A. Lange & Söhne with the Datograph of 1999.

Regrettably, it has been claimed that the L951.1 housed in the Datograph was the only known wristwatch chronograph movement combining both features. Bear in mind that the Datograph was launched in 1999 – 70 years after the Longines saw daylight in a retail store window. 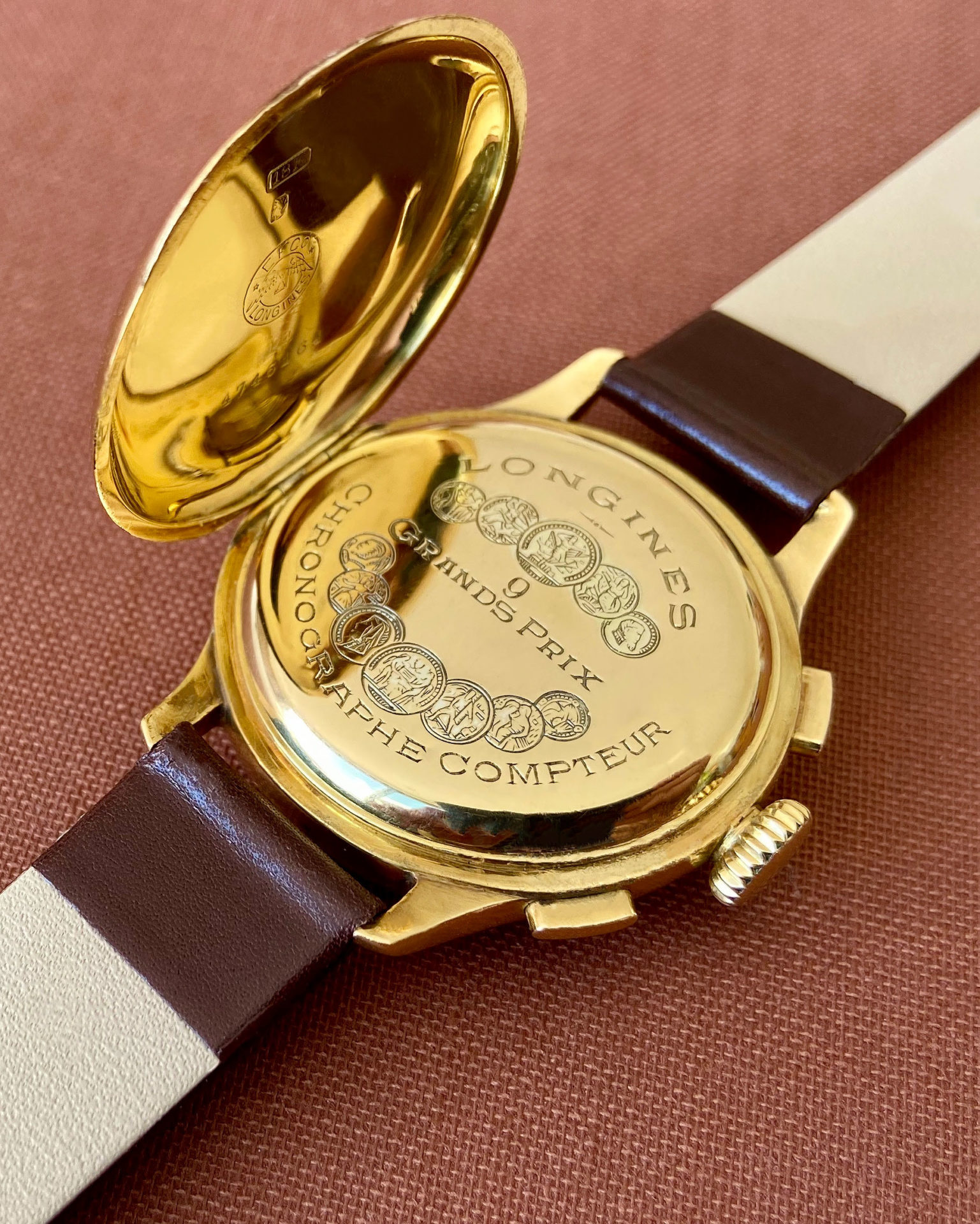 The inner case back of the 13.33Z chronograph wristwatch 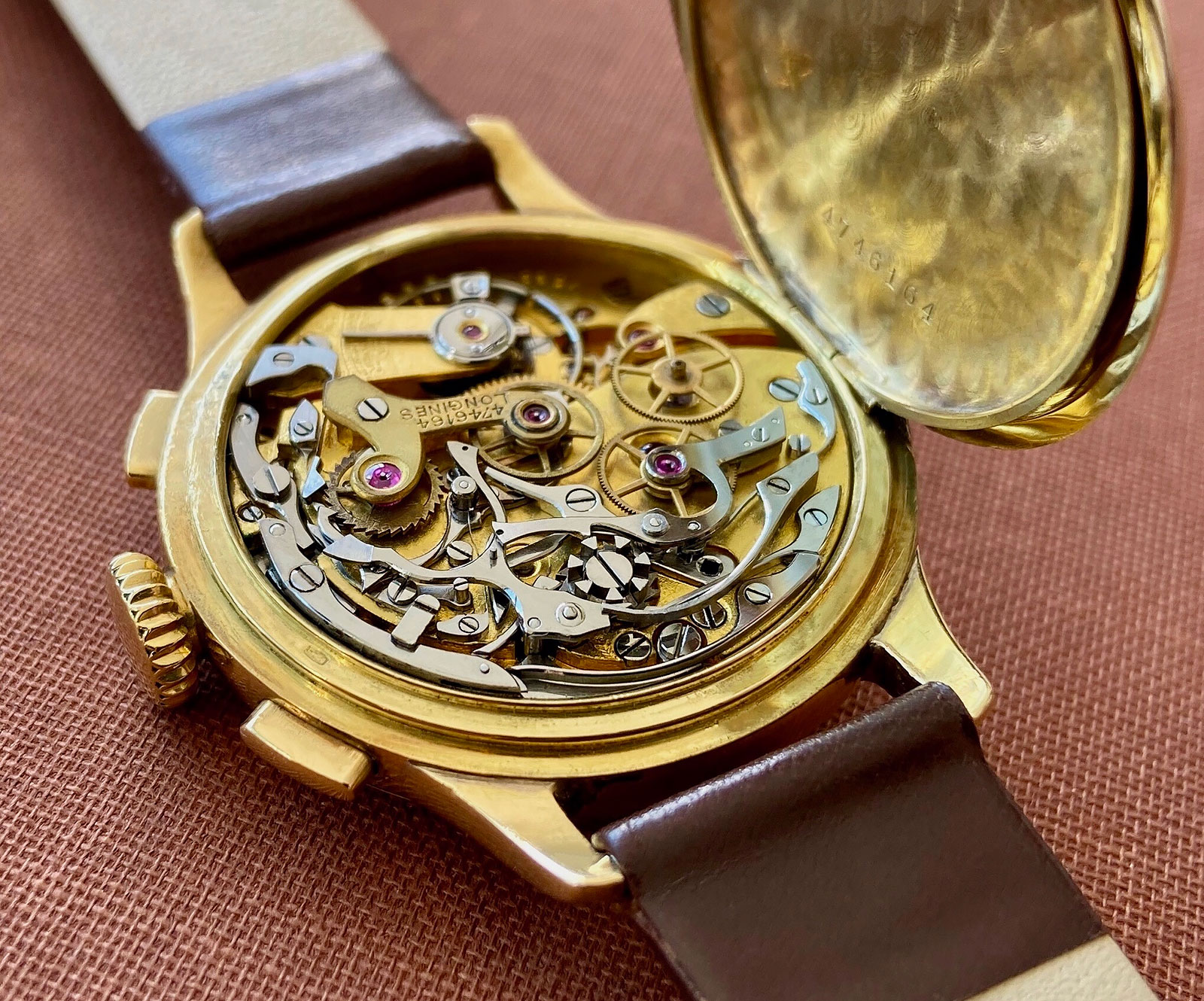 Not only were the inner workings of this wristwatch eminently progressive, but its external design was also very much ahead of its time. The 18k-gold case reveals a particular design language that only became commonplace several years later in the mid-1930s. This is especially evident in the shape of the thick lugs, which are very different from the thin, wire lugs that were practically standard for chronographs of the 1920s. 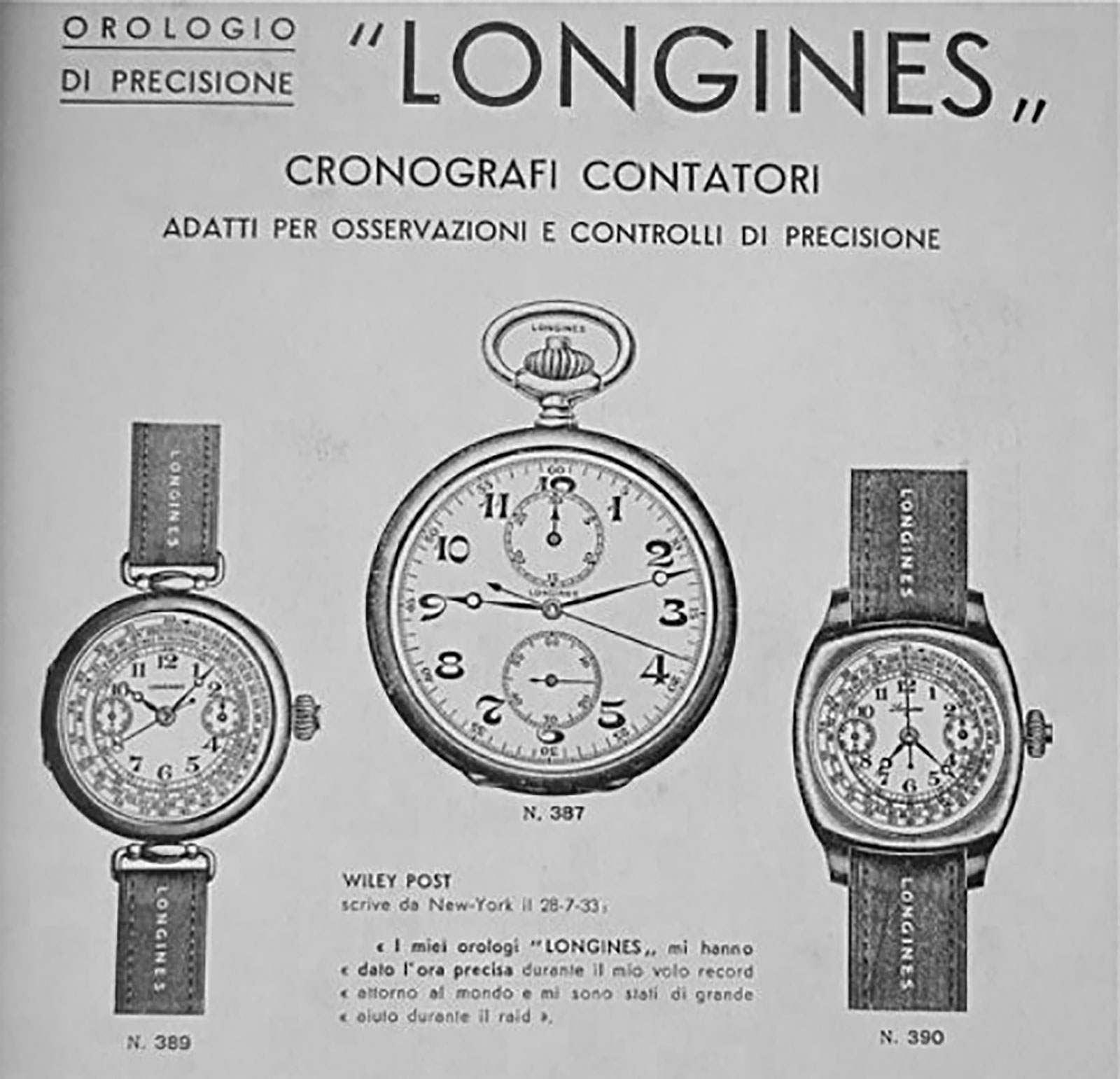 The Heritage department of Longines, with its world-class, complimentary service, managed to retrieve additional information from their vast archives: the chronograph was sold on October 24, 1929 to Ostersetzer, then an important Longines retailer in Italy. 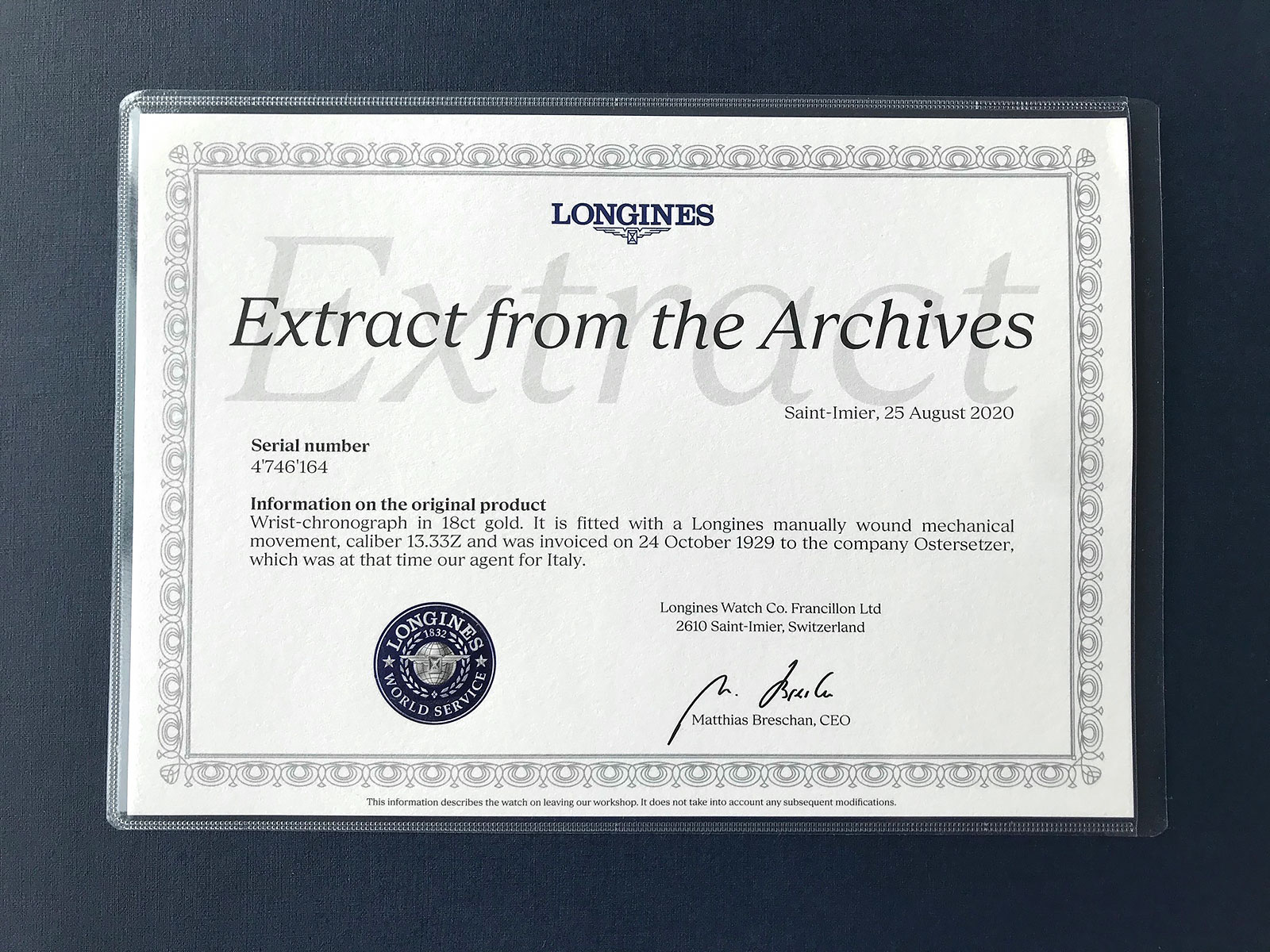 Most importantly, the Heritage department confirmed this watch is the earliest instance of either a flyback or two-pusher chronograph they have encountered. Longines’ own well-curated museum possesses a two-pusher, flyback chronograph powered by the 13.33Z, but dating to 1930. This 13.33Z chronograph is a crucial piece of evidence that attests to Longines’ status as the pioneer in wristwatch chronographs.

Residing in Europe, the author is a medical doctor whose practice focuses on patients with hereditary diseases, while also conducting research in the field of human genetics. A collector and scholar focused on precision timekeepers, he launched the open-access Observatory Chronometer Database (OCD) in 2017. You can also follow him on Instagram.