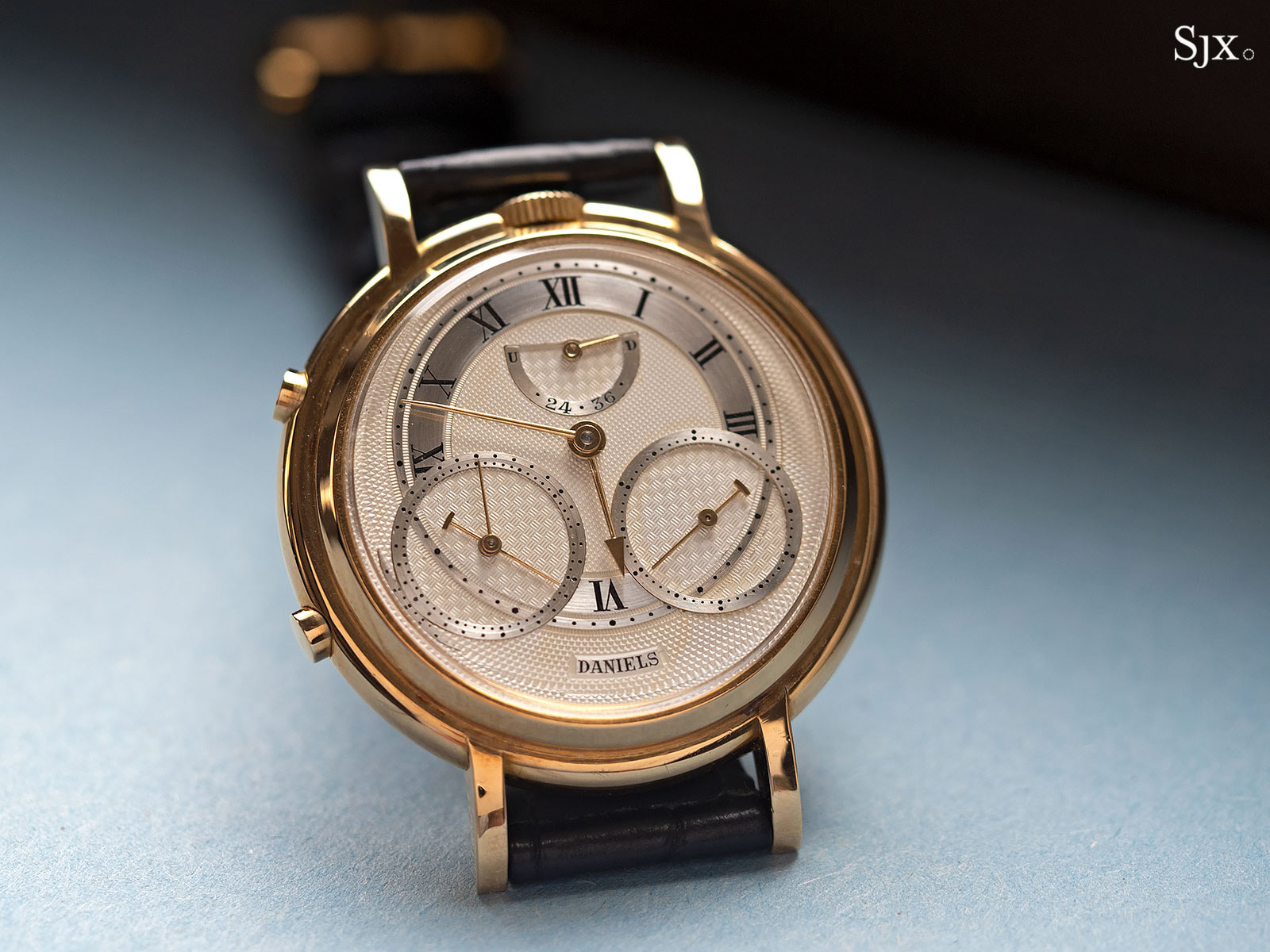 The first wristwatch George Daniels ever made in a career that spanned over 50 years was the Chronograph Wristwatch (and the second was the inventive and perhaps more lyrical “Spring Case” watch). It was finished in 1991, though Dr Daniels had worked on it for several years, having used it as part of a display at the 1986 Baselworld trade fair to exhibit the use of his Co-Axial escapement in wristwatches made by various brands, including Omega, Rolex and Patek Philippe.

Despite its modest name, the Chronograph Wristwatch is a masterpiece. The late Dr Daniels’ apprentice, and now master watchmaker in his own right, Roger W. Smith serviced the watch not too long ago.

“Whenever a Daniels wrist or pocket watch lands on my bench for a service, I am always tinged with a sense of excitement,” says Mr Smith, “The chronograph wristwatch is no exception and the abundance of ideas within are staggering… this watch packs a mighty punch with the Daniels’ compact chronograph mechanism.” It is worth remembering that the Chronograph Wristwatch, like all of Dr Daniels’ one-off timepieces, was hand-made with manual tools, from movement to case. Consequently, it exhibits both mechanical inventiveness as well as the peculiarities of a hand-made timepiece. That’s especially so given that Dr Daniels was already 65 years old when he completed the watch in 1991. The proof of its special nature is evidenced by the fact that Dr Daniels never sold the watch. According to David Newman, one of Dr Daniel’s oldest friends and now the chairman of the George Daniels Educational Trust, “This watch was retained by George, and he rejected many offers for purchase from collectors around the world.”

Only after Dr Daniels’ death was was the watch sold at Sotheby’s in 2012 for £385,250, or US$617,594, to the current owner. A large sum, but one that in hindsight seems like a bargain since the Space Traveller pocket watch sold for just over £3.2m last year. The watch is physically impressive, being the largest Daniels wristwatch ever made. At 42mm in diameter it’s considerably larger than the Millennium, which was 36mm, and the 40mm Daniels Anniversary. The diameter is identical to that of the later Spring Case, though the Chronograph Wristwatch feels larger due to its wider and longer lugs. The winding crown sits at 12 o’clock And the chronograph pushers on the left of the case

“It was his first wristwatch and he must have been experimenting as he made the case,” says Mr Newman, “Its 42mm diameter was the largest wristwatch case made by George.” “I like the size very much, which has quite a contemporary feel at 42mm,” says the owner of the Chronograph Wristwatch, who prefers to remain anonymous. “The size also works well given the dial design and layout; the watch sits well and is comfortable after long periods of wear.” The Chronograph Wristwatch (left) and the Spring Case The more pyramidal Spring Case in the foreground The reverse faces of the Chronograph Wristwatch (left) and Spring Case

While the case sets it apart from other Daniels wristwatches, the dial and hands are quintessential Daniels style. Despite the classical, Breguet-inspired style, the dial is eminently functional and sensibly laid out, as was typical of Mr Daniels’ work.

The dial is solid silver and engine-turned, with each of the sub-dials being separated pieces attached to the main body. All of the markings are hand-engraved and filled with black lacquer. And the hands are solid gold and in the Daniels-style, featuring arrowheads on the main hands and fan-shaped counterweights on the smaller hands. A showcase for the Co-Axial

Equipped with twin barrels that give it a 60-hour power reserve, the hand-wound movement boasts two key complications – a tourbillon and chronograph – along with a power reserve indicator at 12 o’clock driven by differential screw mechanism. The primary complication is a four-minute tourbillon with Co-Axial escapement, similar to the one he later installed in the Spring Case. The steel tourbillon cage makes one revolution every four-minutes, a considerably more leisurely pace than the conventional one-minute, and is held in place by a polished steel bridge. Inside the carriage is a two-arm balance with gold adjusting screws and a blued, free-sprung balance with overcoil. The other complication is a two-button chronograph that Mr Smith refers to above, with the elapsed seconds and minutes combined on the left sub-dial (constant seconds sits on the right sub-dial).

Writing in All in Good Time: Reflections of a Watchmaker, his autobiography first published in 2000, Dr Daniels described it as “an experimental chronograph”, in essence a smaller version of the compact chronograph mechanism found in the Space Traveller’s pocket watch. The chronograph mechanism was “[compressed] into unused space to the side of the escapement”, in order to reduce the height of the movement. The chronograph mechanism visible to the right of the tourbillon “Usually chronograph mechanisms take on a standard format [with the levers and gears on top of the bridges], but in this piece George utilised a tiny space to the right of the tourbillon cage in which to plant his chronograph mechanism,” explains Mr Smith. “The result is a completely original mechanism, which adds no thickness to the movement, the likes of which horology had never seen.”

“It uses a clever clutch type system which engages and disengages the chronograph function from the going train, and was more than likely inspired by his love and fascination of the motor car,” adds Mr Smith.

“George created just two watches which contained his unique chronograph mechanism. Surprisingly, the first was the wrist watch which would have been incredibly challenging to make due to its scale. This was quickly followed by the mighty pocket watch which went on to inspire the dial layout for the Daniels anniversary wristwatch.”

Despite the inventiveness and sophistication of the chronograph mechanism, it was almost an afterthought. “The addition of the complex chronograph was simply to add interest to the watch,” wrote Mr Daniels in his autobiography, “so that attention could be directed to the escapement.” From conception to realisation, the Chronograph Wristwatch is illustrative of Dr Daniels’ technical brilliance, artful craftsmanship, and a practically minded approach to business.