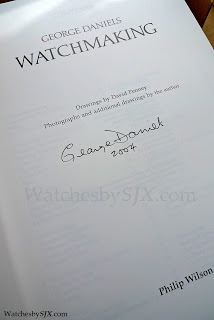 Inventor of the co-axial escapement, George Daniels, has passed away at 85. Mr Daniels was a legendary watchmaker and one of the earliest independent watchmakers, in today’s sense of the word. For his “services to horology”, he was made a Commander of the British Empire (CBE) in 2010.

Most famous for creating the lubrication-free co-axial escapement, which he sold to Omega (though Omega does lubricate it, Mr Daniels was also an author. He wrote Watchmaking, a masterful book that explains, in great detail, how to make a tourbillon wristwatch.

His style of watchmaking was most reminiscent of classical Breguet watches. But his watches are rare – in his entire career he only completed 37 watches entirely on his own – though more were made together with his protege Roger W. Smith like the Anniversary wristwatch.

When not making watches Mr Daniels’ love was vintage Bentleys.