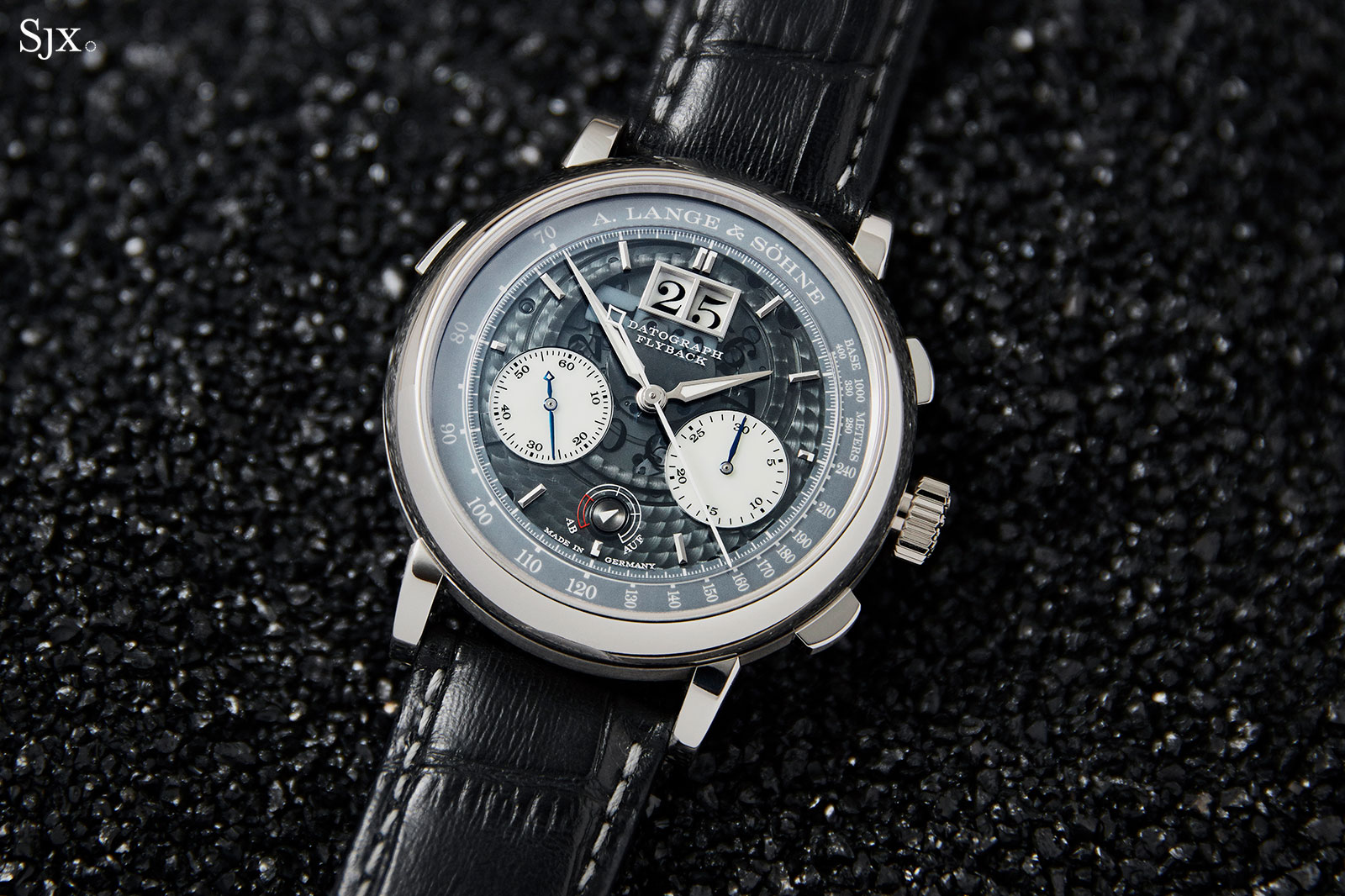 Whispered about since SIHH 2018 when a handful of clients were shown a preview (and when Lange also launched the major chronograph of the year), the Datograph Lumen has just been unveiled at the opening of A. Lange & Söhne’s new boutique in Dresden. A limited edition of 200 watches, it’s a variant of the Datograph Up/Down, and the fourth watch in Lange’s series of glow-in-the-dark special editions, which include the Grand Lange 1 Lumen and the Zeitwerk Luminous “Phantom” occasionally worn by no less than Richemont chief Johann Rupert himself.

Like the other Lumen watches, the new Datograph has a translucent, grey-tinted sapphire dial, circled by a tachymetric track printed on a German silver ring; Lange watch dials are typically plated solid silver.

This reveals the carefully pearled base plate of the L951.7 movement, but more importantly, the discs of the trademark oversized date inspired by the digital clock installed in Dresden’s Semper Opera. The hour and minute hands are solid gold, while the counter hands are blued steel

The hands, power reserve pointer, date, chronograph registers, minute and tachymetre track glow green in the dark, because they are coated with Super-Luminova, the conventional luminescent compound used for watches. Super-Luminova is mostly made up of strontium aluminate, absorbing light energy that is then discharged as a glow in darkness. But the signature date has been tweaked for this watch. While in the ordinary Datograph the date indicated via two white discs, in the Datograph Lumen only the disc for the first digit of the date (which goes from “1” to “3”) is white. The disc for the second digit is actually a thin wheel of glass, printed with the date numerals and set against a luminous background. The glass date wheel, along with the cross for the tens of the date numeral, and the Super-Luminova-coated central seconds hand

The changes to the movement mean it is a new calibre, which is why it is named L951.7, instead of L951.6 as in the ordinary Datograph. Slightly thicker at 8.1m high (the ordinary version is 7.9mm), the Datograph Lumen movement is made up of 454 parts, compared to 451 in the L951.6. The three extra parts in the Datograph Lumen movement are the luminous background plate for the date, a screw to secure the plate, and the glass plane for the “hat” of the power reserve indicator. More so than the ordinary Datograph, the aesthetic of the Lumen edition is dominated by repeating circles, from the registers to power reserve to the date mechanism. The shift in appearance, despite it being essentially the same watch, is primarily due to the date display now being circular, as opposed to its traditional, two-window box. The result is a more contemporary look, a radical departure from the original, formally classical Datograph that still relied on Roman numerals for the hour markers. If the Datograph Up/Down is the in-between, the bridge between yesterday and tomorrow, the Lumen is definitely the future. The rest of the Datograph Lumen is identical to the standard model. The case remains the same 41mm in diameter, though it is slightly thicker at 13.4mm high, compared to 13.1mm for the ordinary Datograph. Necessary for the modified date mechanism, the increase in height is imperceptible, and accommodated by a slightly higher bezel. From the back the view is exactly the same, but it is magnificent enough that nothing needs to be changed in the first place. The movement is visually almost identical to that in the original Datograph, save for some minor tweaks, as well as a upgrade to a free-sprung, adjustable mass balance wheel. But as with all of the Up/Down watches, the Lumen has a 60-hour power reserve, compared to just 38 in the original. Already well known and highly regarded, the Datograph movement is an overdose of the decorative techniques Lange is known for. The straight grained steel levers of the chronograph contrast with the warmer, silvery tones of the German silver bridges, accented by the liberal use of blued steel screws and rubies in gold chatons. Mechanically the Datograph movement also boasts an unusual feature: a jumping minutes counter hand that ticks forward in precise, one-minute steps. This contrasts with minute counters in most chronographs, which creep forward over the course of a minute, or start moving just before the elapsed seconds hand passes “12”.

Although the basic calibre inside is now nearly two decades old – or 23 years old if counted from the year development began – the L951 movement remains a landmark in contemporary watchmaking just because it is so finely constructed and decorated. Update November 7, 2018: The three extra parts of the Datograph Lumen movement are detailed.