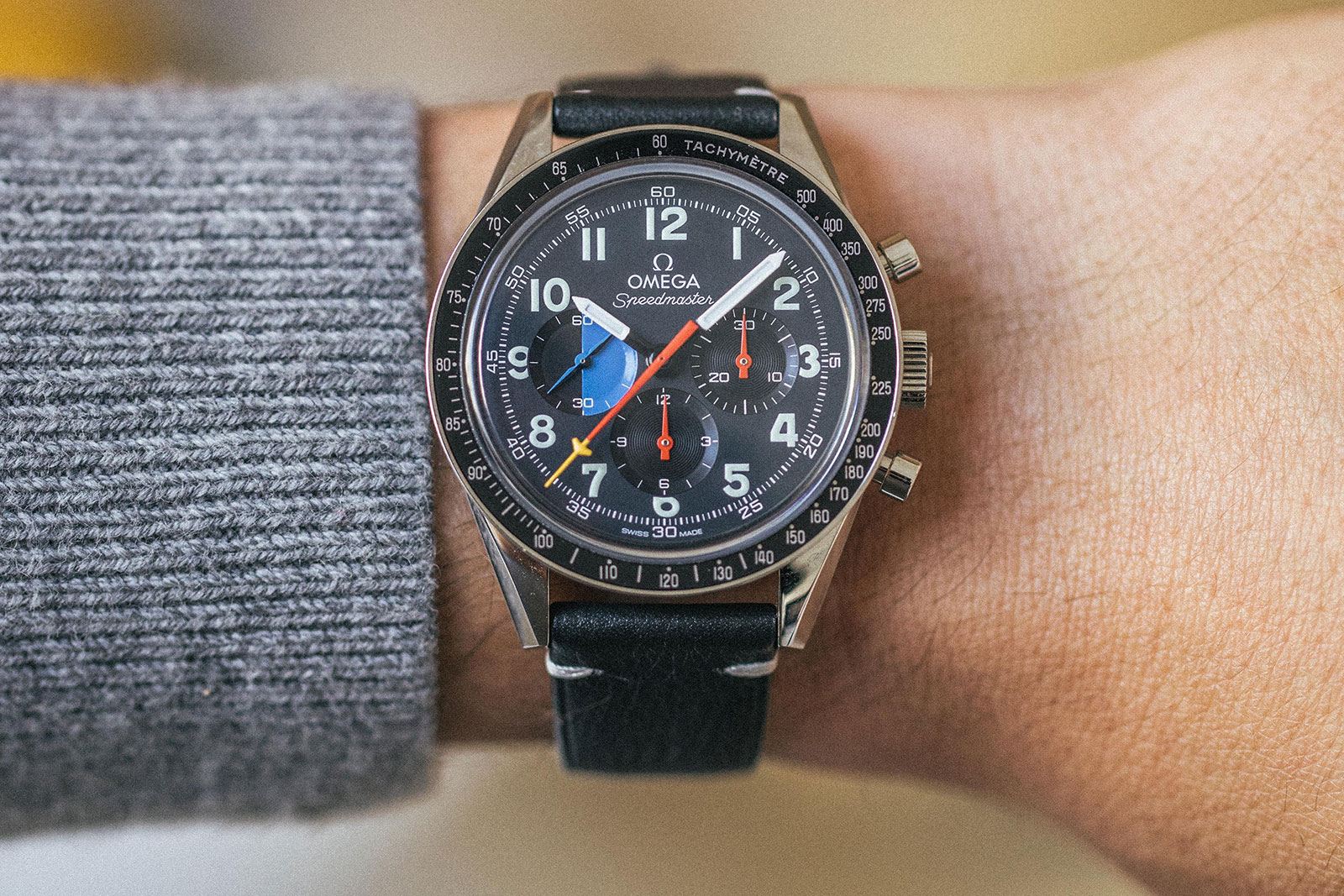 Founded a decade ago by Benjamin Clymer, New York-based watch blog Hodinkee has rapidly become a powerhouse of online publishing and retail. So it’s unsurprising that Hodinkee celebrates its 10th year with a limited edition with one of the world’s biggest watch companies that offers a new take on a historical timepiece.

Announced barely a month after the smash hit Speedy Tuesday “Ultraman”, the Omega Speedmaster Hodinkee 10th Anniversary Limited Edition is inspired by a 1990s Speedmaster “Mark 40” that was owned by Mr Clymer’s grandfather, the very same watch that sparked his interest in watches. Specifically it was a Speedmaster Day-Date ref. 375.0084 launched in 1996 and powered by a Valjoux 7750. It was nicknamed “Michael Schumacher” after the proliferation of ads in the 1990s featuring both the watch and the German F1 champion. [Hodinkee published Mr Clymer’s thoughts on what makes the “Mark 40” special.] The 1990s original (left) with the Hodinkee edition

But the Hodinkee Speedmaster itself is actually a variant of the Speedmaster CK 2998 Moonwatch remake, with the same 39.7mm steel case, aluminium bezel insert and the hand-wound, Lemania-derived cal. 1861 inside. The blending of ingredients from both a Moonwatch and automatic Speedmaster is an unusual one in the Speedy universe, but imaginative and well executed. All the key visual elements of the “Mark 40” Schumacher have been retained, though some have been necessarily tweaked to suit the new movement. The date track on the original is now a 5-minute track, while the day and night indicator is a blue-black constant seconds register. And the twin central hands on the original (for elapsed seconds and the date pointer) have been merged into a seconds hand tipped with yellow “wings”. The Speedmaster Hodinkee 10th Anniversary has a solid back embossed with the Speedmaster seahorse emblem and engraved with commemorative text on its rim. Delivered on a grey leather strap, the Speedmaster Hodinkee is accompanied by a grey NATO-style fabric strap and packaged in commeoriatve box that includes a spring bar tool and travel case.

The Speedmaster Hodinkee 10th Anniversary is limited to 500 pieces, priced at US$6500. It’ll be available at Omega boutiques within the United States and also the Hodinkee shop online. Deliveries commence in November 2018.

The bad news for MCH Group, a Swiss organiser of exhibitions that include Baselworld, started on the last Sunday of July when Swatch Group chief executive Nick Hayek shocked the watch world by declaring his company would leave Baselworld. With a budget of over SFr50m for accommodation, travel and the exhibition, the Swatch Group and its 18 brands were the largest exhibitors at Baselworld.

A few days later MCH responded with a press release that almost read like an open letter to the watch world. Barely a week later, the chief executive of MCH, Rene Kamm, resigned.

As a result of all of that, MCH has just announced it expects a bigger annual loss than previously forecast, despite modest gains for the first half of the year, which still turned a profit, though down 17% compared to the year before. Largely due to having to write down the book value of the exhibition halls in Basel – which Mr Hayek pointedly criticised as needlessly expensive – MCH will endure “an annual loss running into the three-digit millions.”

The announcement almost sounded contrite, albeit with its contrition expressed in corporate legalese: MCH is “undergoing a process of transformation in which it has to align itself to the major changes taking place in the classical exhibition and event business.” And it also named a Dane with some experience in luxury goods and watches, Hans-Kristian Hoejsgaard, as the interim chief executive of the group.