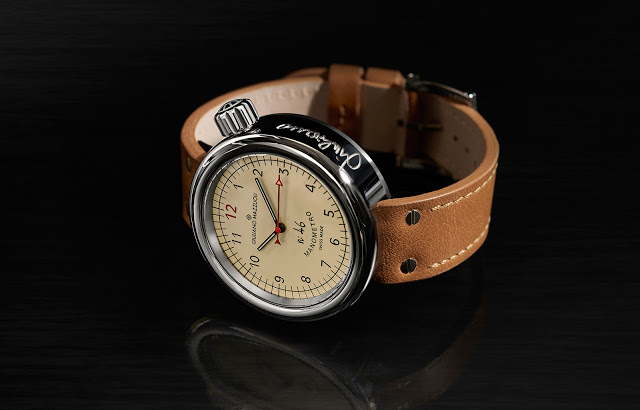 Inspired by a pressure gauge, which translates as Manometro in Italian, the Giuliano Mazzuoli Manometro was introduced in 2005. Distinctive despite its simplicity, the Manometro was Mazzuoli’s greatest hit, instantly recognisable and more famous than the brand behind it. Simple design elements are cleverly combined to create a clean but striking appearance that is eminently functional. The Manometro is exemplary Italian design. The steel case is polished and a large 45mm in diameter, with a wide, rounded bezel. The seconds hand resembles the pointer on a pressure gauge. It’s combined with a narrow Tuscan leather strap, proportions that emphasise the instrument-like appearance. Like the original Manometro this has an ivory dial, with the limited edition number written by hand at six o’clock. Equipped with the automatic ETA 2824, the Manometro 10th Anniversary is limited to 120 watches, a reference to the number of months in a decade. It’s priced at €3900 before taxes and available at Giuliano Mazzuoli retailers.