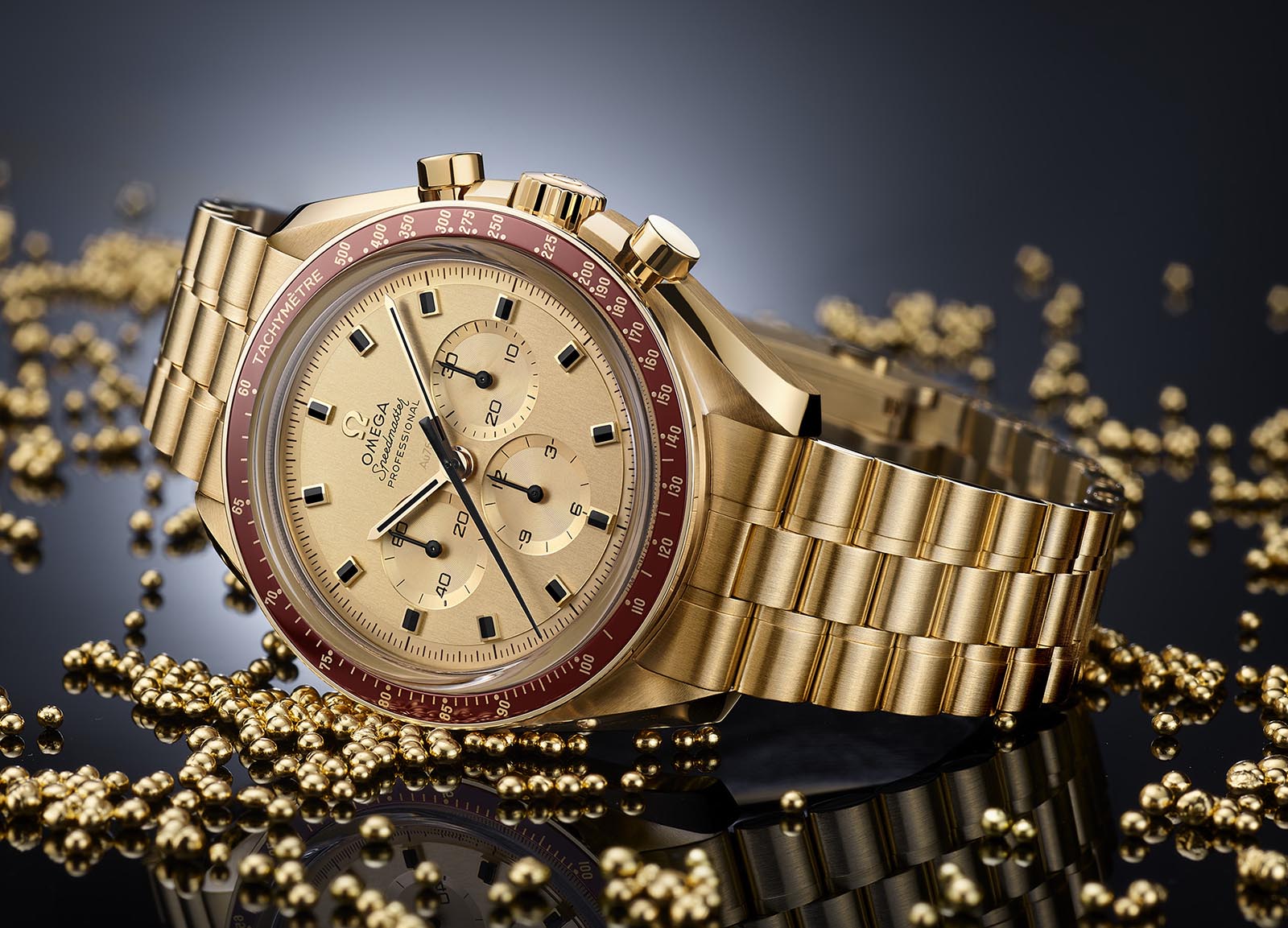 To mark the 50th anniversary of the Apollo 11 mission that landed Neil Armstrong and Buzz Aldrin on the moon, Omega has faithfully remade – with several improvements – the solid gold Speedmaster ref. 145.022, sometimes known as the “Nixon” Speedmaster. The original was launched in 1969 to celebrate the Moon landing, becoming both the first (of many) limited editions Speedmasters and also the first, and definitive, Speedmaster in solid gold.

The model was produced from 1969 till 1973 in relatively small numbers – just 1014 examples were made. Thirty three were given to significant figures in the administration of the day, including President Richard Nixon and his Vice-President Spiro Agnew – who both had to decline the watches for compliance reasons – as well as astronauts, Swiss politicians and watch industry leaders, while the remaining watches were made available to the public. This is the first of several Speedmaster special and limited editions to mark the Moon landing, including, rumour has it, a two-tone, steel and gold model equipped with the same cal. 3861. Visually, the remake is spot-on.

The case remains 42mm wide, with the same asymmetrical case band, twisted, “lyre” lugs, and importantly, the burgundy bezel insert. Not only is the new remake a dead ringer for the original, the Speedmaster Apollo 11 Anniversary edition will also be produced in a limited edition of 1014. But the visual similarities belie significant upgrades inside and out. Firstly, the case is in a newly developed, proprietary 18k gold alloy, Moonshine Gold, a slightly paler, or less yellow, than traditional yellow gold. Used for the case, bracelet, dial, hour markers and hands, the alloy retains its polish and colour better over time thanks to the inclusion of palladium.

The dial is marked “Au750” just under 12 o’clock, as well as “OM” at six, short for or massif, or “solid gold”. And just like the original, it features oblong gold hour markers inlaid with black onyx.

One of the most notable differences between this and the original are the hands: while they were entirely covered in lacquer on the original, the hour and minutes hands on the remake are filled with a narrow strip of black lacquer, although the central seconds remains entirely black. As on the original, the dial is marked “OM” at its bottom, short for “or massif”, French for “solid gold”.

Whereas on the original the bezel insert was anodised aluminium, the burgundy insert on the remake is ceramic with the markings of its tachymeter scale engraved and filled in Ceragold. As on vintage Speedmasters, the bezel has a coveted “dot over 90”, with the marking for “90” on the scale over rather than beside the number, one of the defining feature of pre-1970 watches.

But arguably the biggest improvement is what’s inside the watch, and visible through the sapphire case back: the brand new cal. 3861. It’s derived from the Lemania-based cal. 861 that’s been used in the Moon Watch since 1969 and little changed since then. The cal. 3861 marks the biggest revamp of the movement since then, and it is major. The calibre remains hand-wound, but is now a METAS-certified Master Chronometer movement, thanks to all the features inside. It boasts a free-sprung balance wheel, lubrication-free Co-Axial escapement, and a Si14 silicon hairspring. The components of the escapement are also made from patented alloys, giving the movement magnetism resistance of over 15,000 Gauss.

And the bridges and base plate of the cal. 3861 are plated in Moonshine Gold, the same alloy used for the case, dial and bracelet. The movement is framed by a ring on the edge of the sapphire crystal, created via two PVD colour treatments on the underside with commemorative text, and a partial globe showing the Americas, as well as the Moon. Notably, both the Moon and globe are in exactly the same proportions to each other as they are in real life. The attention to vintage detail also extends to the bracelet, which has a grooved clasp and an applied vintage Omega logo. More surprisingly, the box is inspired by the Moon crater paper box of the original, but now made of grey ceramic panels that have been 3D printed to replicate the lunar surface. Rounding things out, the top panel is printed with the image of the Sea of Tranquillity, where the astronauts first set foot on the moon. The remake (left) and the original from 1969 Comparing the backs, with the dedication engraved on no. 1 of the original series

A Moonwatch in "Mark 40" Schumacher livery.