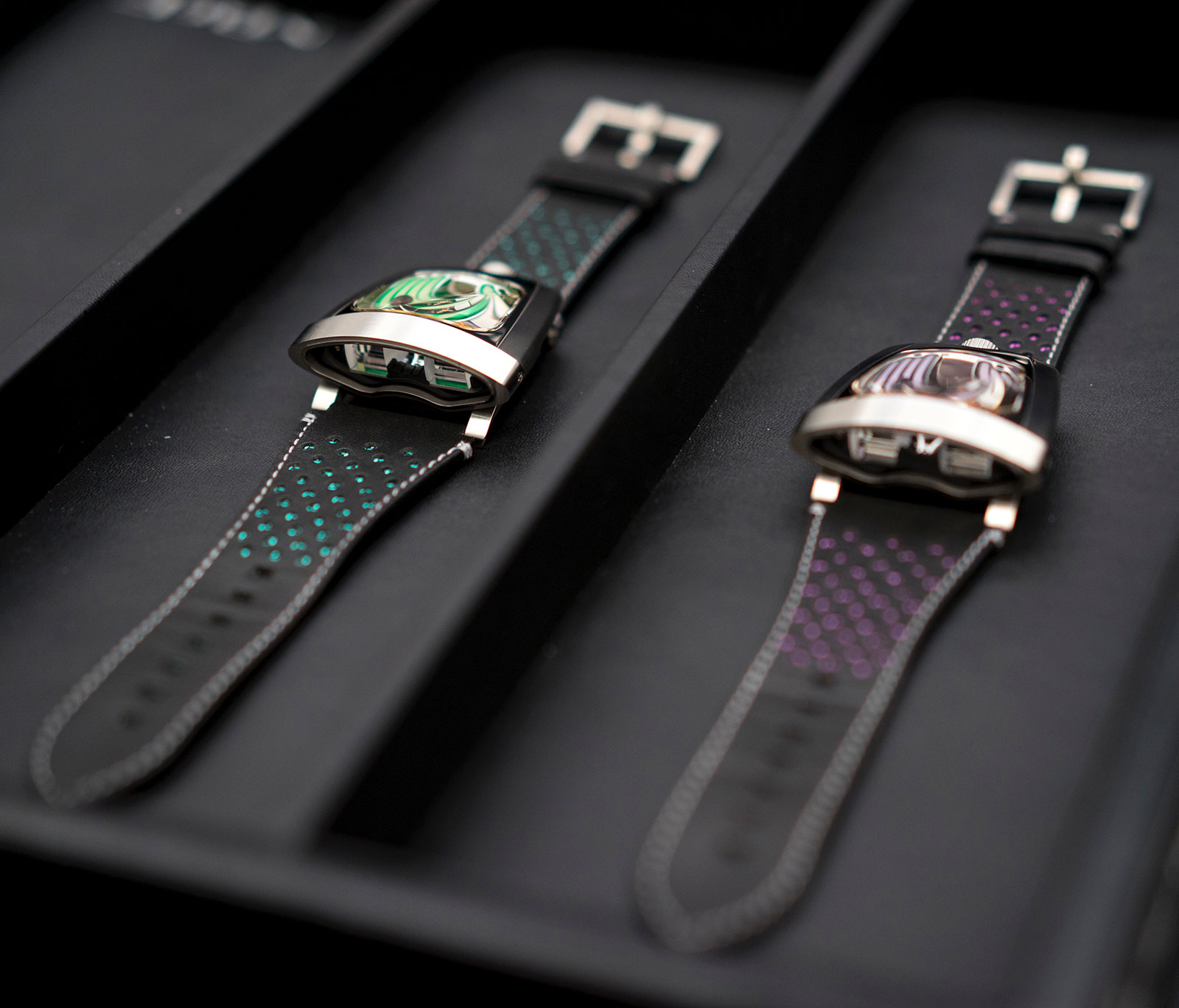 MB&F unveiled the HMX Black Badger at Baselworld this year as the newest addition to the Performance Art collection, limited edition timepieces created in collaboration with artists.

The HMX Black Badger was designed in cooperation with James Thompson, a Canadian industrial designer who founded Black Badger Advanced Composites when he moved to Sweden in 2002. Thompson specialises in glow-in-the-dark rings made from AGT Ultra, a hard resin mixed with photoluminescent compounds. Light energy excites the lume inside AGT Ultra, which then releases the energy by glowing in the dark.

Thompson’s role in the creation of the HMX Black Badger was to supply AGT Ultra for integration into the watch. Usually the lume on ordinary watches is Super-Luminova, a paint that is applied to the hands and numerals for nighttime readability. In contrast, Thompson’s material starts out as solid blocks of resin, which is then easily machined into precise shapes to fit the watch. More importantly, AGT Ultra glows brighter and longer than ordinary Super-Luminova because of its efficiency in storing and releasing light.

Black Badger’s AGT Ultra is not new to watches, in fact it has already integrated into watches by other independent brands, namely the Sarpaneva Korona K0 Northern Lights and the Schofield Blacklamp Carbon.

The case of the HMX measures 46.8mm long and 44.3mm wide, while it is 20.7mm high. It’s made of a combination of Grade 5 titanium and stainless steel. Sapphire crystals are placed on top, front and back of the case to emphasize the use and form of the luminous compound. As with many of MB&F’s Horological Machines, the HMX Black Badger tells time in a very unusual way. Although the HMX is described as a driver’s watch, it still differs from the typical driver’s watch most of us know, such as the Vacheron Constantin American 1921. The time is only apparent from a certain point of view; it’s only possible to read the digits if your hands sit on a steering wheel or are positioned in a similar angle. The HMX Black Badger is a time-only piece, with jumping hours and trailing minutes. It uses the same ETA base movement the original HMX (“X” is a Roman ten to commemorate the brand’s 10th anniversary in 2015), featuring a power reserve of 42 hours. While the base calibre was outsourced, the time display module was designed in-house.

The only thing that doesn’t match the overall look is the strap. The strap is made from perforated calfskin and lined inside with fabric coloured to match the AGT Ultra lume; being extremely thin relative to the dimensions of the watch, it looks less upscale. Nevertheless the watch sits very well on the wrist, taking account of the enormous height of the watch (20.7mm). The strap comes with a titanium buckle that matches the material of the case.

The HMX Black Badger is available in three colour variations, “Radar Green”, “Phantom Blue” and “Purple Reign”, with each limited to 18 pieces. The retail price is SFr48,000 before taxes, or about US$49,300.

Simon Ebenberger lives in Zurich, Switzerland, and is a student at the University of St. Gallen. 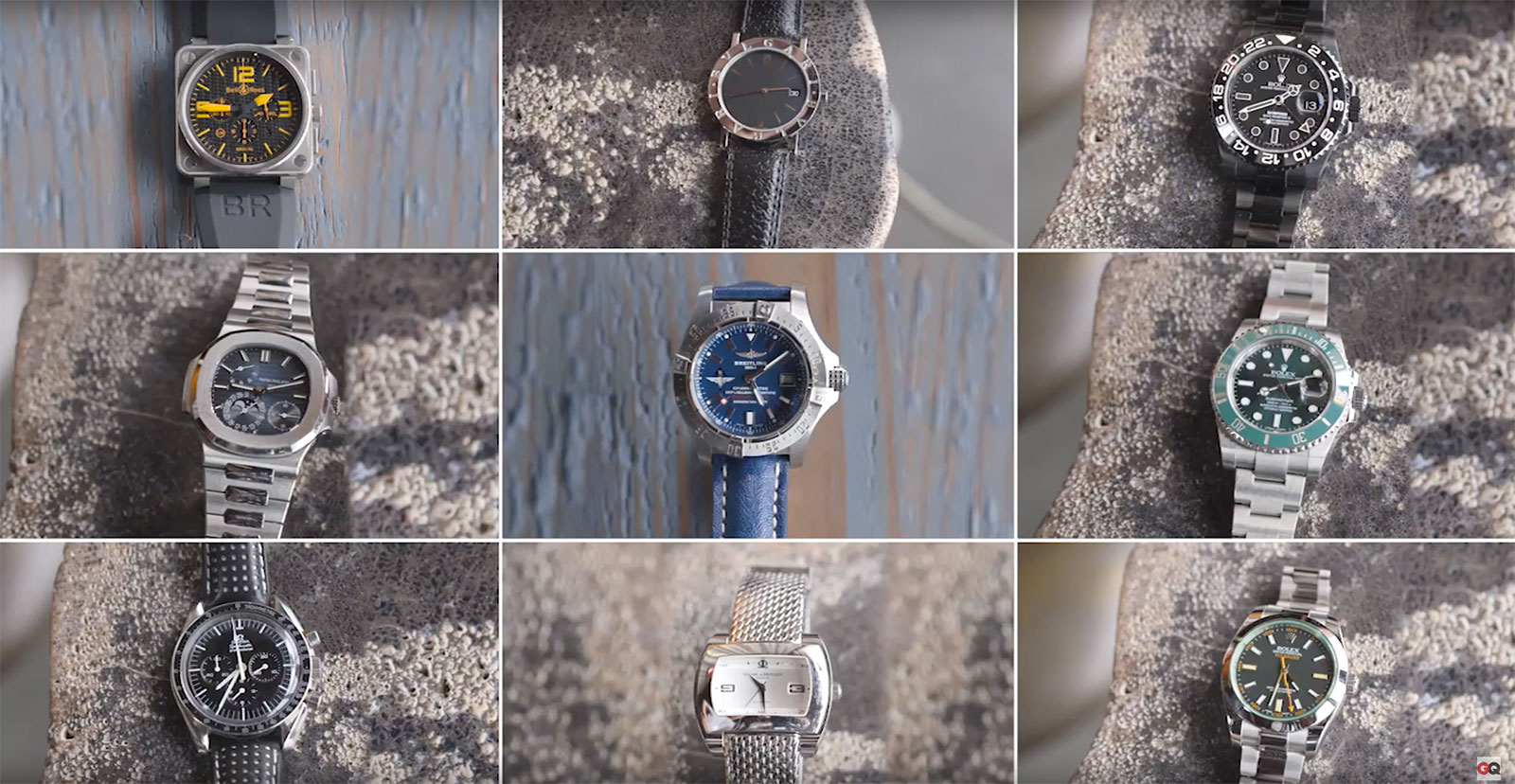 Men’s fashion magazine GQ got Robert Downey Jr. to show his watch collection, including the Jaeger-LeCoultre AMVOX tourbillon he wore in Iron Man 2, as well as a “green money” Rolex. Engaging and not taking the timepieces too seriously, the actor’s stories are more compelling than the watches at hand. Check out the video below.