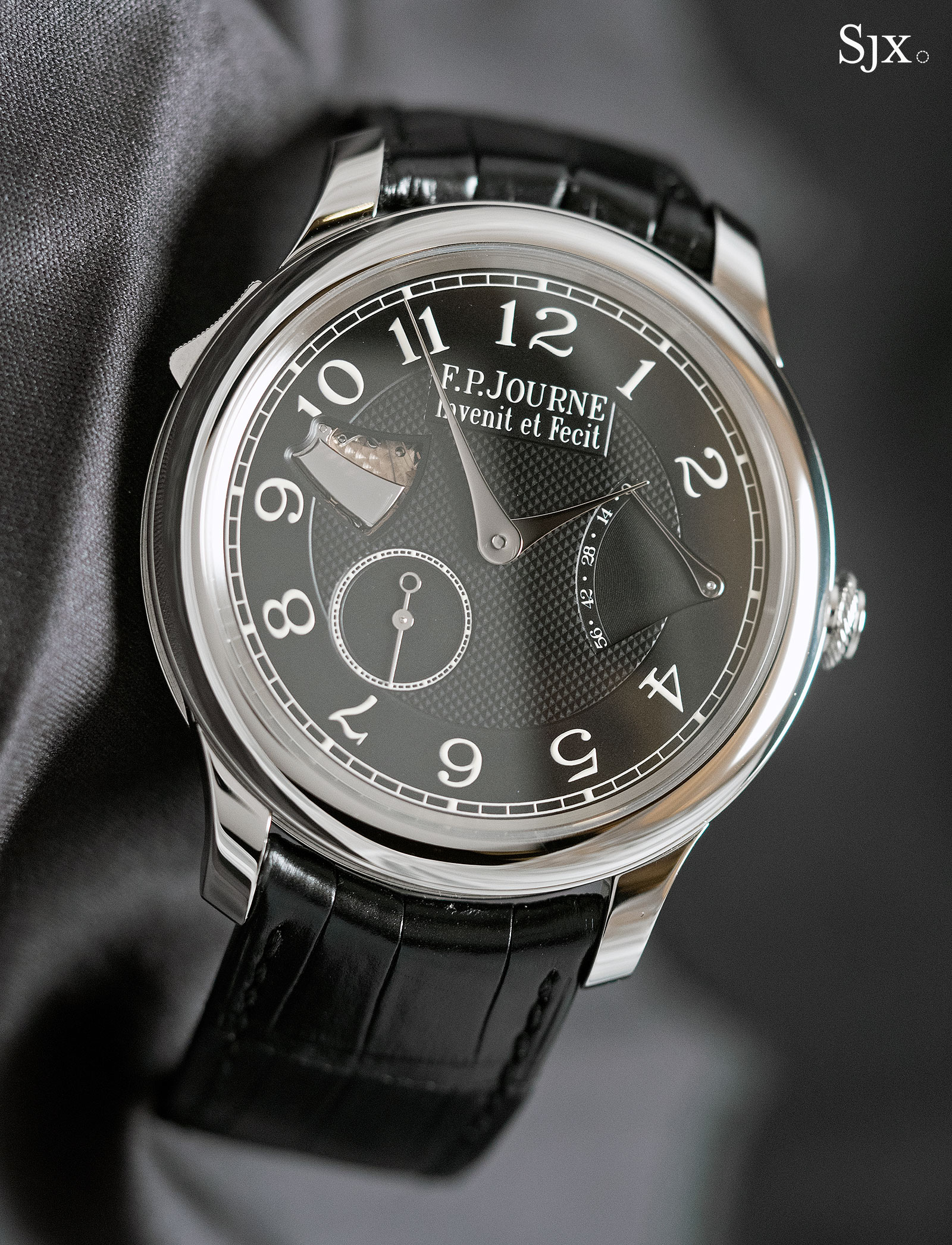 Within F.P. Journe‘s small annual production of about 900 watches is the rarefied Black Label Collection of watches. These have black dials, platinum cases, and are available only to current owners of an F.P. Journe wristwatch. Furthermore they are produced in limited numbers, with each F.P. Journe boutique getting only 12 Black Label watches a year (there are 10 boutiques worldwide), with a maximum of two examples per model.

Made of a solid gold disc, it is galvanically coated black, or even a very dark grey at some angles, with the markings and lettering in ivory lacquer rather than white. The result is a more nuanced palette than a more conventional white-on-black colour scheme. An aperture at 10 o’clock reveals the twin hammer of the minute repeating mechanism, which contrary to tradition, sits underneath the dial. The repeater is activated by a narrow slide underneath the bezel, which sits on the same level as the repeating mechanism, which is underneath the dial. Typical of F.P. Journe movements, the calibre 1510 inside is constructed differently from convention, while being extremely slim. The layout of the minute repeater calibre 1510 similar to the 1304 movement inside the time-only Chronometre Souverain, being recognisable similar from the back. It has twin barrels – for a longish 56-hour power reserve – and a clutter-free construction that hides most of the moving parts beneath the bridges.

Most minute repeating movements have the striking mechanism integrated on the back, which tends to make the movement wider. Instead Journe designed a thin repeating mechanism that sits on the movement and beneath the dial, with both the hammers and gongs being flat and unusually shaped. While repeater gongs usually take the form of circular steel wire, the calibre 1510 has scythe-shaped gongs. Consequently the movement is a flat 4.04mm high, trumped only by the Bulgari (actually Gerald Genta) calibre BVL 362 and the Vacheron Constantin 1731, which are both traditionally constructed. An exploded view of the under-dial mechanism, with the repeater gongs and hammers highlighted

But the form and reduced size of the gongs mean that the sound they produce is different from that on a conventional repeater, with slightly less volume. It’s a tradeoff but one that reflects Journe’s idiosyncratic and ingenious approach to watchmaking.

With nearly all of the repeater under the dial, the only part of the striking mechanism visible on the back is the governor, which sits just beside the balance wheel. Like all F.P. Journe movements the calibre 1510 has its bridges and base plate in 18k red gold. The bridges are finished attractively and cleanly, albeit a tad mechanically. Though the steel parts, particularly the repeater governor, appear more artisanal in their finish.