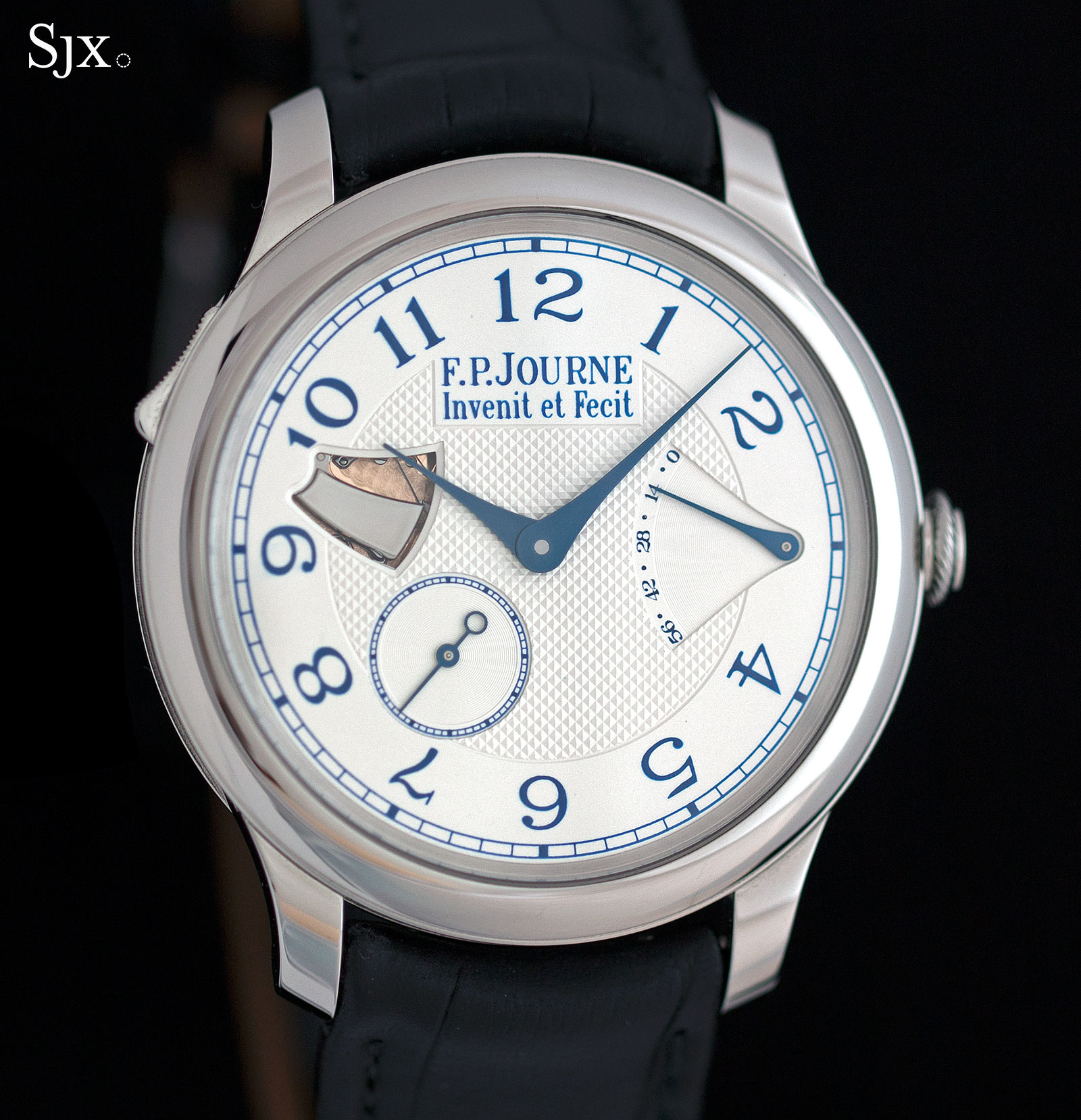 Typical of the brand’s timepieces, the F.P. Journe Souveraine minute repeater is a slim, elegant wristwatch with an ingenious movement featuring Journe’s signature flat hammers and gongs for the striking mechanism that also characterise the top of the line Sonnerie Souveraine.

In fact, when the Souveraine minute repeater was first unveiled in 2008, it was the thinnest minute repeating wristwatch on the market, though that title has since passed on, first to Vacheron Constantin and most recently, Bulgari. But with a movement that’s just a hair over 4mm high – the watch measures just 8.65mm case and all – the Souveraine repeater remains exceptionally thin. Like many of his other complications the repeater mechanism devised by Journe is compact and novel. Compared to the calibre 1304 of the time-only Chronometre Souverain, the minute repeating calibre 1408 is just 0.29mm higher and 1.8mm wider, despite having nearly double the number of parts.

But the key innovation in the repeater are a pair of flat hammers and gongs, something Journe first invented for the handful of grand sonnerie wristwatches he built for Piaget in 1995 (the last one to surface publicly sold at Christie’s in 2011). Conventional repeaters have gongs, which are essentially hardened steel wire, that circle the case, plus located hammers on the edge of the movement, giving the movement a larger footprint or necessitating a smaller movement. The gongs are yellow and red, while the hammers are blue and green.

The flatness of the hammers and gongs means they can be mounted on the main plate of the movement, explaining the aperture in the dial that reveals the hammer of the repeater. This maximises the space inside the case for the calibre 1408, which shares a similar construction to that of the Chronometre Souverain, with twin barrels sitting side by side and the balance wheel just opposite.

While F.P. Journe says rightly that the flat hammers and gongs are louder than typical repeater, they lack the lightness and resonance of repeaters with traditional hammers and gongs. This is likely a natural limitation of the flat gongs, since they have less material to generate sound. Pulling the thin slide on the case located at 10 o’clock winds up the small spring, which is located just under the governor, and sets the repeater in motion. While most of the repeater mechanism is hidden under the dial, with only the hammers visible when the repeater is striking, the repeater governor is on the back. Positioned just beside the balance wheel, the governor regulates the speed of the repeater strikes with a pair of wings that extend as the spring that powers the repeater unwinds. The wings encounter friction from the surrounding air as they spin, slowing the unwinding of the spring. The governor sitting inside a steel frame similar to that F.P. Journe uses on his watch dials

Unlike most F.P. Journe watches that are cased in platinum or rose gold, the case of Souveraine repeater is sensibly made of stainless steel. Materials with lower density transmit sound better, which is why tapping a wood wall generates a higher and louder sound than tapping a concrete wall. The steel case is a modest 40mm in diameter, but is slightly heftier than similarly sized steel watches thanks to the 18k rose gold bridges and base plate of the movement. The dial of the Souveraine repeater is made of silver and finished with the hobnail guilloche found on all F.P. Journe dials. While the style of the dial is familiar, there is a subtle twist: the logo, hour numerals and minute track are actually a dark blue, instead of the usual black. The same subtle blue shading was also found on the dials of the Steel 38mm set introduced last year, all of which have stainless steel cases, like the minute repeater.

The F.P. Journe Répétition Minutes Souveraine is priced at SFr180,500 before taxes, equivalent to US$185,000, and available at F.P. Journe boutiques and retailers. That’s an enormous amount of money by any measure, but put next to the competition, the F.P. Journe minute repeater is arguably modestly priced.