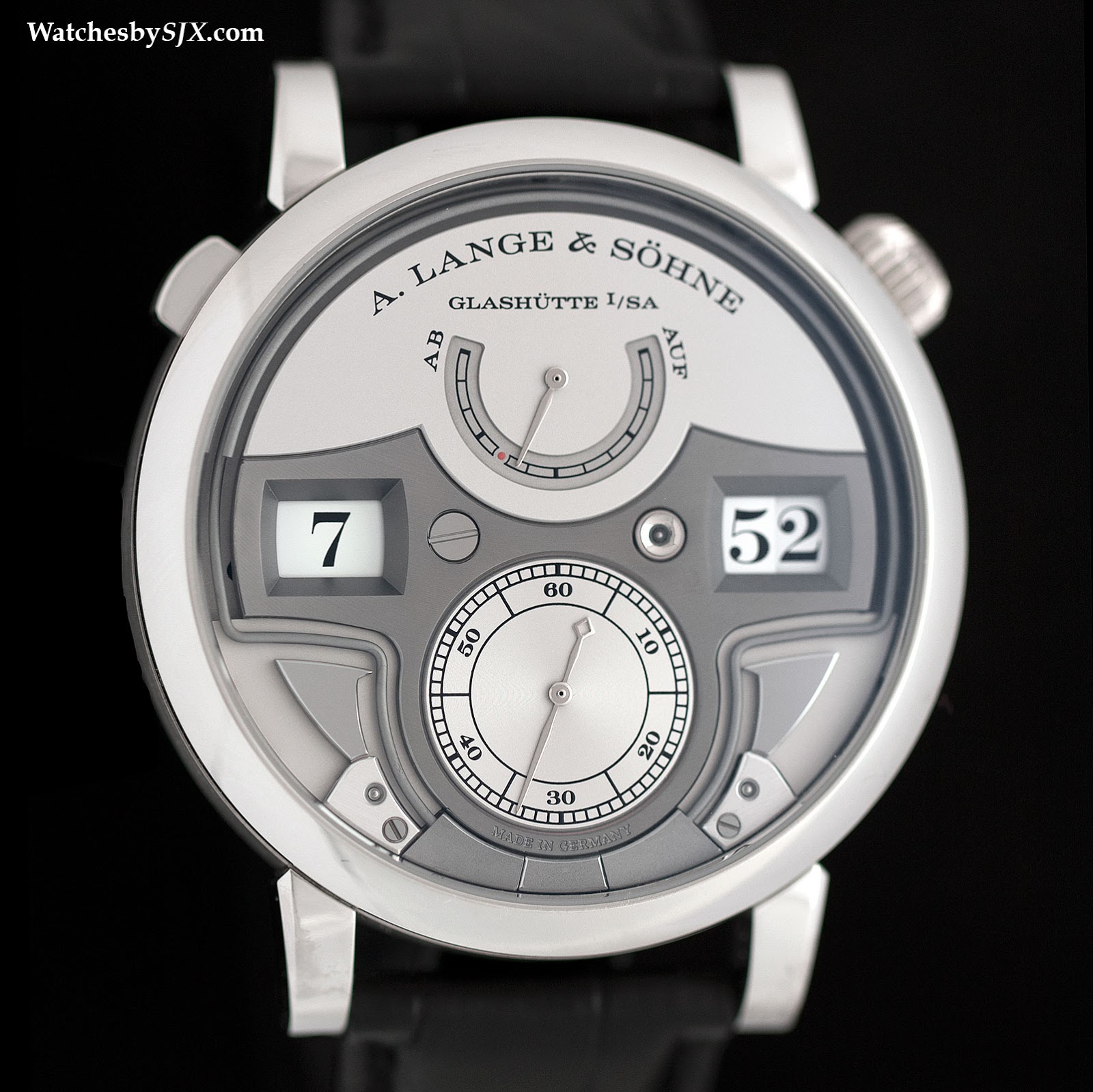 One of the most complicated and expensive watches ever made by A. Lange & Söhne, the Zeitwerk Minute Repeater was the flagship product of Lange’s SIHH 2015 line-up. It is one that has been long anticipated with rumours about its existence for years.

It is, however, not Lange’s first repeater. That distinction goes to the Grand Complication of 2013, but that cost €2 million and only six were made. The Zeitwerk Minute Repeater, on the other hand, is €440,000, combining lovely movement decoration with ingenious engineering; the movement totals 771 parts.

Because the Zeitwerk repeater has both a digital display (which takes up a lot of space) and minute repeater, several features were built into the movement to accommodate the two.

Unlike most repeaters that strike the hours, quarters and minutes, this is a decimal repeater, meaning it chimes the hours, ten minute segments and remaining minutes. Given the time display is digital, the decimal striking format is more intuitive, since the chimes translate into each digit of the display from from left to right. The hammers and gongs are mounted on dial, with the gongs curiously tracing the form of the jumping hours bridge. That’s solely for aesthetic effect, and according to Lange’s technical head Anthony de Haas, has no impact on the sound quality.

Conventional repeaters have a second, smaller mainspring wound by the slide or button action that powers the repeater. That avoids draining the primary mainspring or causing a drop in amplitude of the oscillator while the repeater is chiming.

But unlike most minute repeaters, the Zeitwerk only has one mainspring as the power source for both the time display and repeater mechanism. And remember that even the plain Zeitwerk without a repeater function already has a short, 36 hour power reserve. Because the jumping hours display takes up significant space in the movement, there was no space for another mainspring. Thus the repeater is powered by the same mainspring as the time display.

It’s an obvious solution, but one with the disadvantage of limiting the number of repeater activation to just 12, one of the accommodations required to combine the repeater with the digital display.

Because the Zeitwerk has a constant force mechanism – a prominent, complex structure  dotted with rubies in the middle of the movement – there is no effect on timekeeping even when the repeater is in action. Even though the torque from the mainspring will inevitably drop when the repeater is in use, the constant force mechanism sits in between gear train and the oscillator, ensuring consistent levels of torque at all times. Past that the repeater mechanism is automatically blocked as the mainspring has wound down to a critical level – represented by the red dot on the power reserve. Only when the mainspring is wound up again can be repeater be used once more. Other notable features have also been integrated into the movement, which can neither be wound nor set while the repeater is striking, preventing damage.

The movement looks as complex as it is, with innumerable gears and wheels across the three-quarter plate. There is so much going on it’s easy to see the forest and not the trees; but up close the finishing is inescapably excellent. The Zeitwerk Minute Repeater is only available in platinum for now, with a case diameter of 44.2 mm, exactly the same as the Zeitwerk Striking Time hour striker. It’s priced at €440,000.