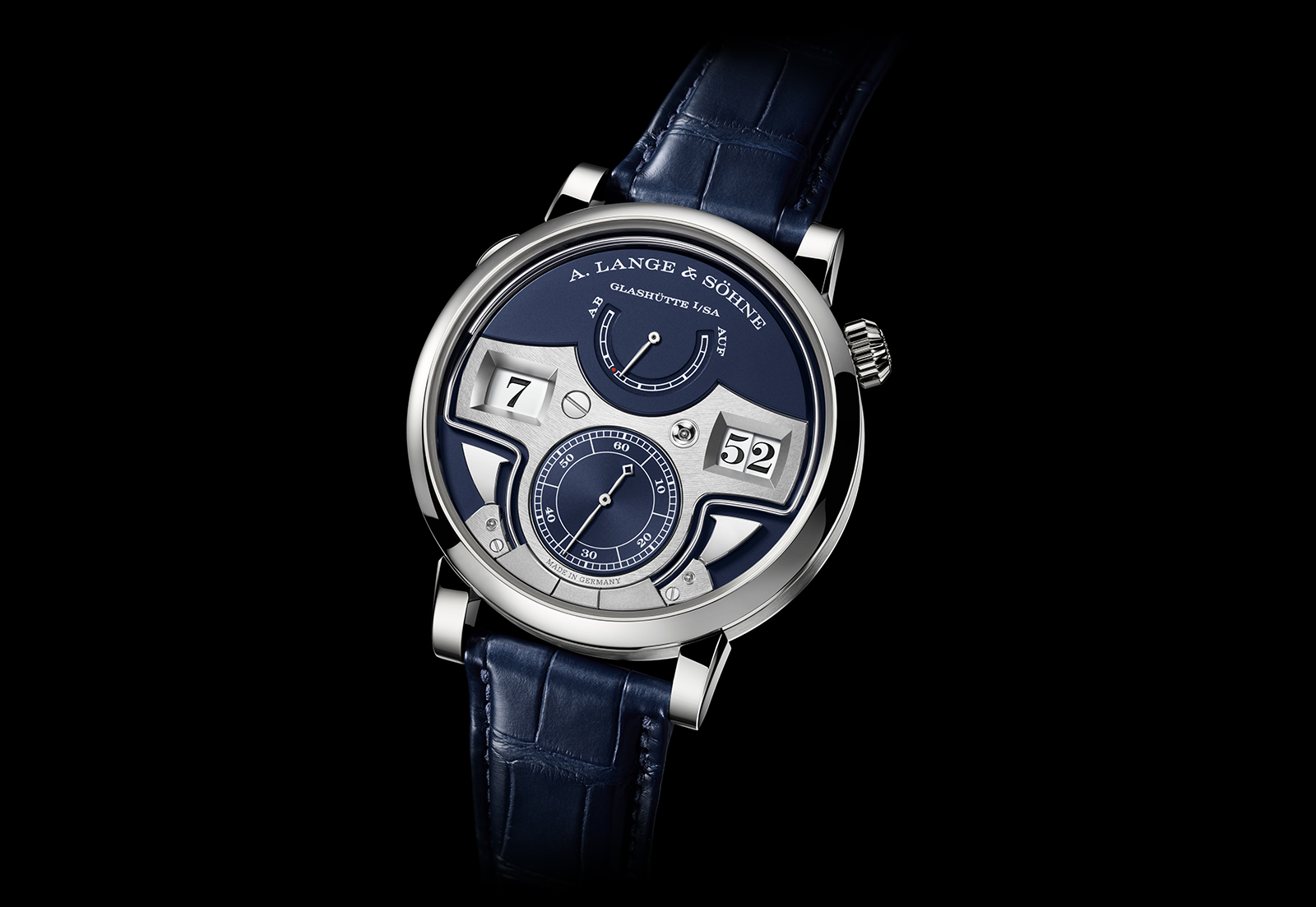 Five years ago, A. Lange & Söhne unveiled its first minute repeating wristwatch (setting aside the €2 million Grand Complication), but it was no ordinary repeater. Instead the it was a decimal repeater incorporated into the Zeitwerk and its signature digital time display.

Originally introduced in platinum as part of the regular collection, the Zeitwerk Minute Repeater now returns in white gold as a 30-piece limited edition at Watches & Wonders 2020. Though the white gold case bestows little price advantage over the monochromatic platinum model, the watch does look more striking in blue.

The idea of a decimal-repeating, digital watch is sensible – pairing the digital, jumping hours and minutes of the Zeitwerk with a decimal repeater means the chimes to match time display of hours, tens of minutes, and single minutes. In other words, the decimal repeater is as intuitive as the digital time-display. This is in contrast to typical minute repeaters that chime the time in 15-minute blocks, followed by the the remaining minutes. 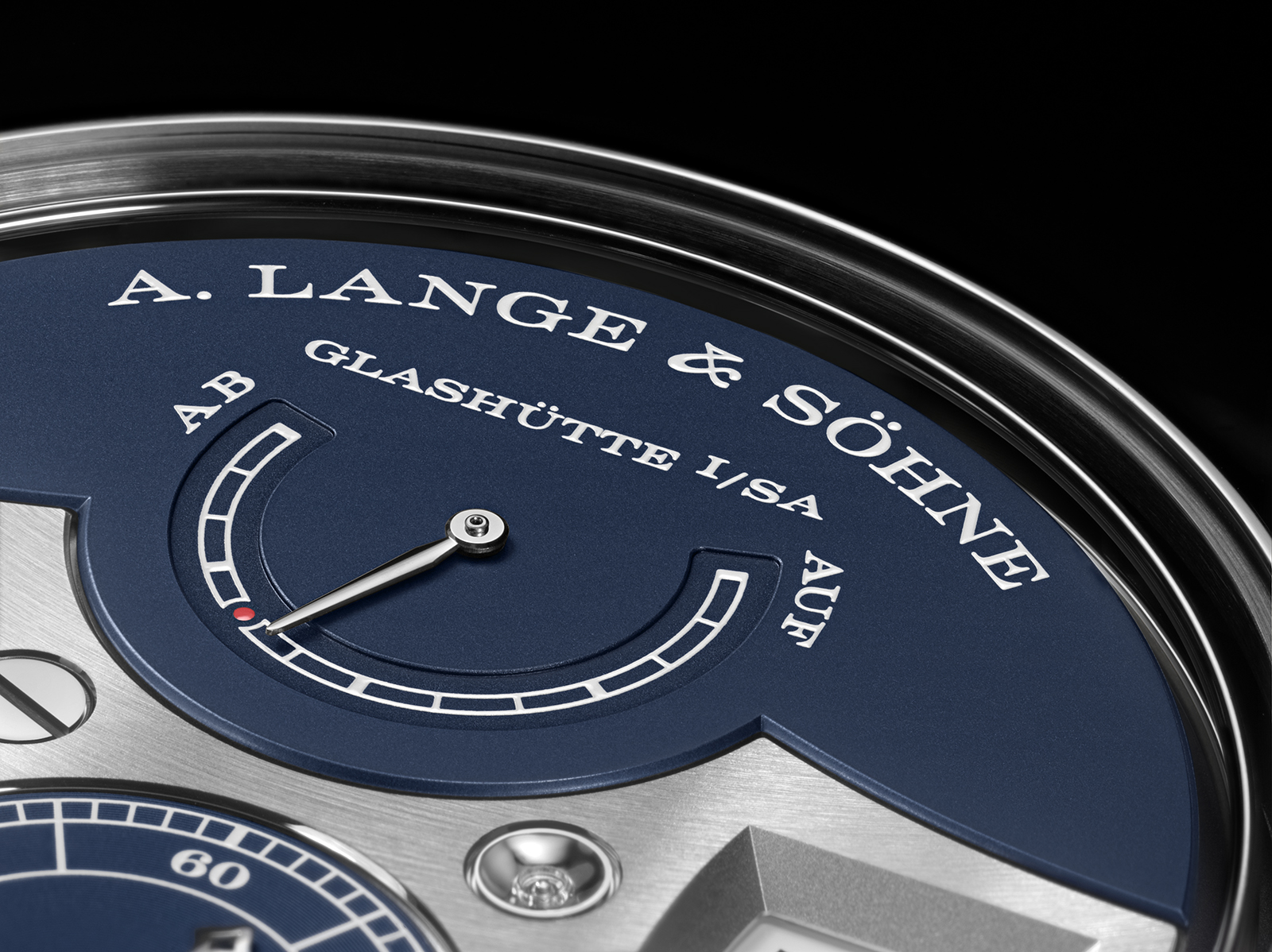 Visible at 12 o’clock is a power reserve indicator

The only stylistic difference with this new edition is the dial colour. While the time display is still framed by the familiar rhodium-plated bridge, the rest of the dial is now dark blue, a first for the Zeitwerk (which has historically been available with either silver or black dials). And below the bridge are the symmetrically-arranged twin hammers and gongs, with the latter tracing the periphery of the dial. 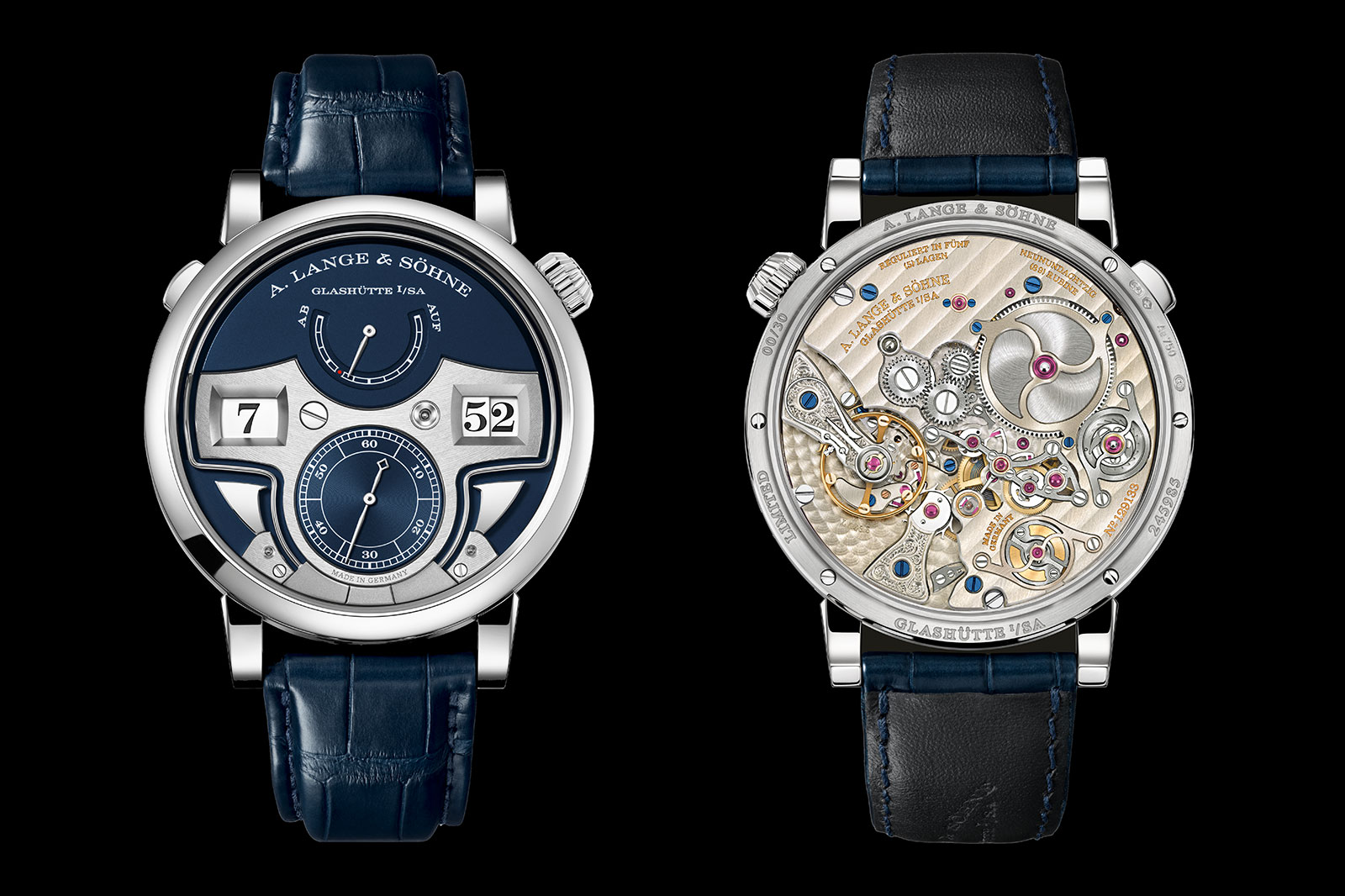 Mechanically, the new edition remains the same, with the same L043.5 inside. The power reserve is a short 36 hours, displayed on the scale at 12 o’clock. A red dot on the scale indicates the 12-hour mark of remaining energy when the repeater mechanism disengaged to prevent full depletion of the remaining power reserve, as the repeater is driven by the mainspring barrel instead of a secondary, independent barrel as conventional repeaters are. 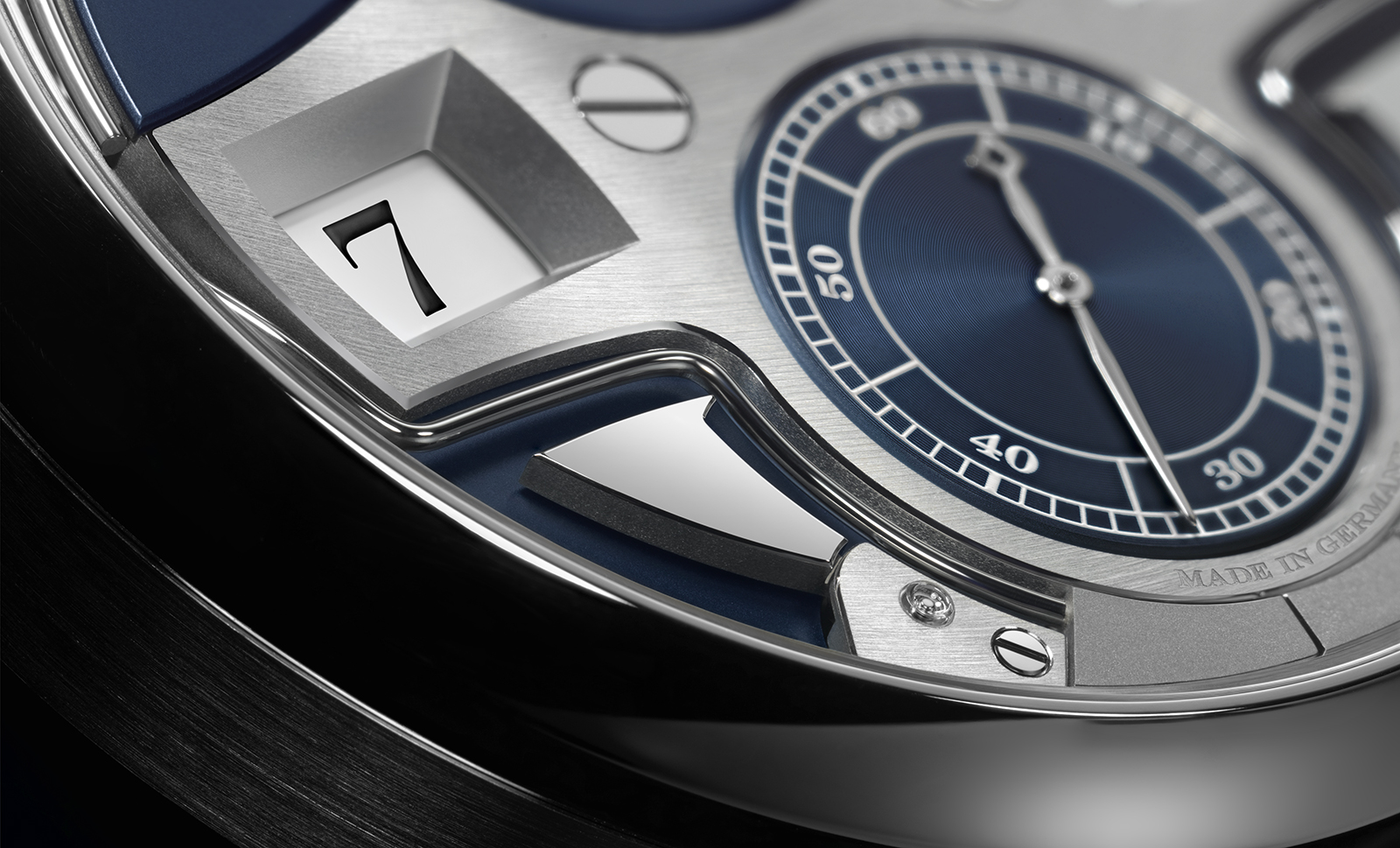 The hammers strike inwards, towards the centre of the dial

Visible through the case back is the L043.5, a movement that builds upon the basic, time-only Zeitwerk movement, but incorporates the additional minute repeating mechanism. Despite the straightforward functions – just the time and repeater – the L043.5 movement is notably complex in execution, being comprised of 771 parts.

The time display mechanism contains a one-minute remontoir that regulates power to the escapement and also facilitates the jumping of the minutes disc. But it is also advantageous for the repeating mechanism, as the remontoir also allows for an accurate chiming of the current time when activated, as the repeater strikework “reads” the time off the snail cams connected to the hour and minute discs. 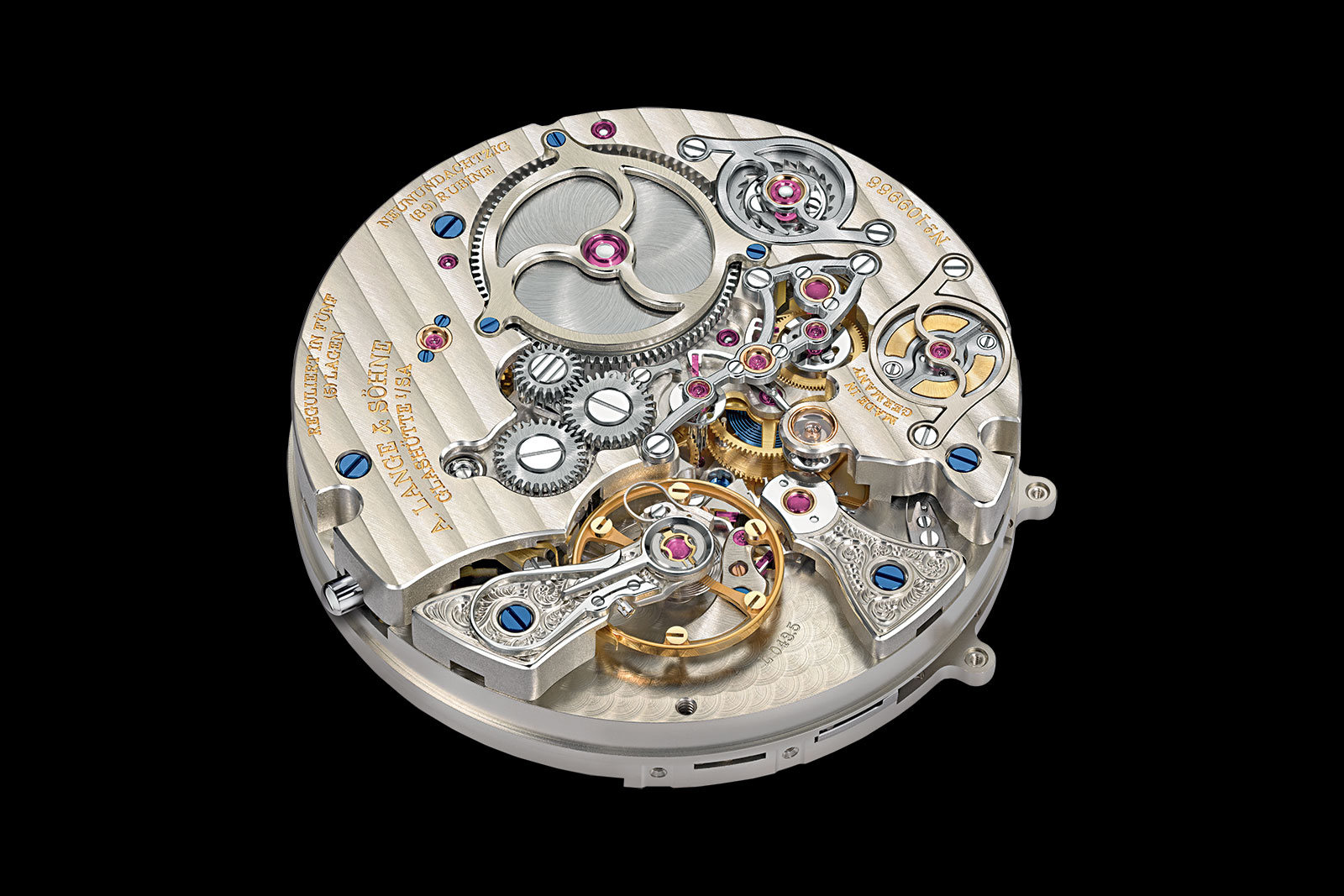 The remontoir spans the centre of the movement, setting under a long, skeletonised bridge. Visible next to it is the repeater governor, which regulates the rate of the repeater chimes.

When the repeater is activated, the ratchet wheel of the mainspring barrel is uncoupled from the winding train, which allows it to freely unwind and power the repeater. Simultaneously, a lever blocks the remontoir during this period, which prevents the hour and minutes discs from jumping until the chiming is complete. 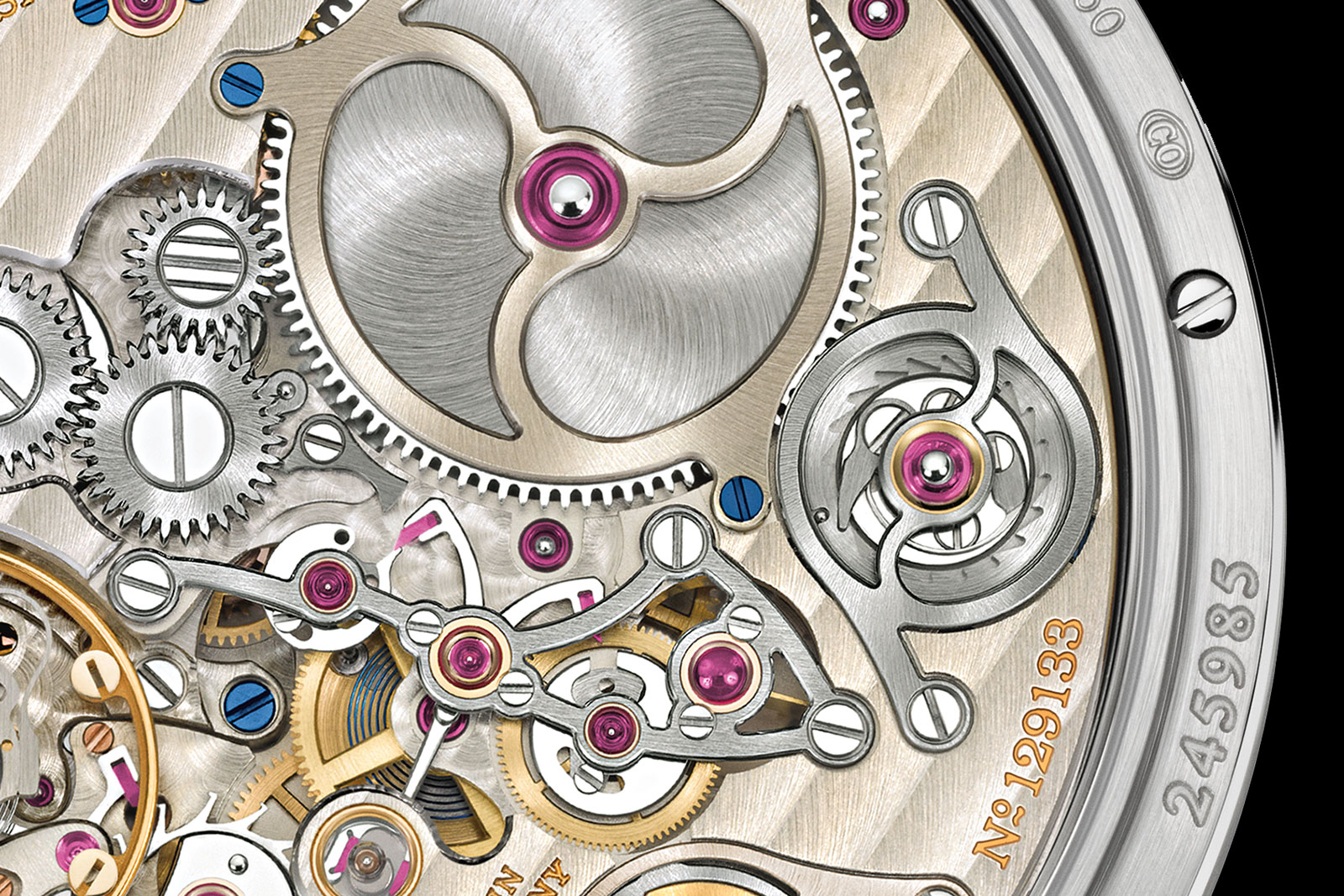 The white gold Zeitwerk repeater is priced at €449,000, which is almost the same as what the platinum version costs. But the tiny, 30-piece run as well as the blue dial – which is common for simpler Lange watches but uncommon for major complications – makes this arguably more compelling.

The anniversary train rolls on.