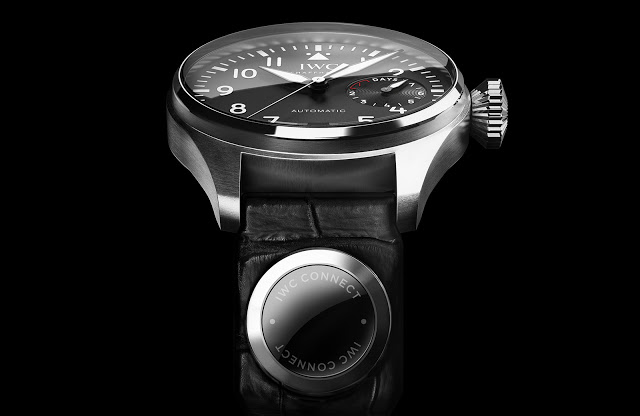 The Swiss watch industry continues to pile into smart watches, with the latest being IWC Connect. It’s not a smart watch, rather a small device embedded into the watch strap, giving a mechanical watch the functionality of a smart watch, just like the smart watch band from Montblanc, a sister company of IWC in the Richemont group. Familial rivalry perhaps?

Pictured above on a Big Pilot’s watch but available on other models since it’s essentially a strap attachment, IWC Connect will offer an activity tracker as well as wireless connectivity to other devices. But in the grand tradition of high-tech watches from low tech firms, IWC announced this before details are available, proving that for publicity it’s better to be first than better, so that’s it for now.

Addendum 6 May 2015: IWC also releases a brief teaser video for IWC Connect that shows the Big Pilot it’s attached to more clearly (at 0:21 of the video). And it is a Big Pilot that is not part of the current collection, most notably because of the “9” on the dial, something the current line of pilot’s watches lack. Might this be the new Big Pilot that will be unveiled at SIHH 2016?

IWC has announced has just announced its entrant into the smart watch segment, IWC Connect, a smart strap attachment with an activity tracker and wireless connectivity. 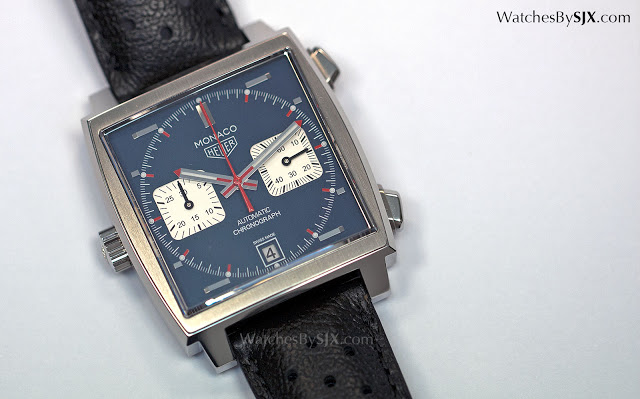 The most distinctive TAG Heuer wristwatch is arguably the Monaco, with its square form and block hands instantly recognisable as a timepiece from the seventies. And unlike many of its peers from that decade it has not lost its charm, especially since Steve McQueen wore the iconic blue dialled ref. 1133 in the film Le Mans. TAG Heuer has remade the ref. 1133B on several occasions, but at Baselworld 2015 it introduced the most affordable iteration of the Monaco Steve McQueen to date.

Since Jean-Claude Biver took over the LVMH watch division which includes TAG Heuer he has pummelled the brand into accepting his vision: mainly more affordable, simpler and more fashionable. Watches styled by brand ambassadors like French DJ David Guetta and model Cara Delevingne fulfil the fashionable part of the vision, while timepieces like the new Monaco Calibre 11 appeal to traditionalists while being aggressively cheaper than before. The new Monaco Calibre 11 is similar to previous re-editions of the Monaco but is a new model, with a new model reference ref. XCAW211P. It has a matte blue-grey dial with a grained surface, just like the most common version of the vintage ref. 1133B (there were several including one in a brighter blue). Horizontal baton markers and red tipped hands are also taken from the original design. Though not identical to the original, the Monaco Calibre 11 is convincing enough. The case measures 39mm by 39mm, with a large, square sapphire crystal with subtly bevelled corners. The crystal is well made and likely one of the most expensive components of the watch, as is often the case with watches in this price segment with fancy crystals. With the crown on the left to mimic the layout of the Breitling-Heuer-Buren Chromatic movement found in the original 1133B, the movement is a Sellita SW300. It’s an automatic movement identical to the ETA 2892, with a chronograph module from Dubois-Depraz. The Monaco Calibre 11 is fitted on a perforated black calfskin strap with a pebbled texture that resembles the Corfam faux leather rally straps found on the vintage Monacos. Importantly, the TAG Heuer Monaco Calibre 11 (ref. XCAW211P) retails for US$5550, €4995, ¥580,000 and S$7650, with delivery starting in October 2015. The retail price of similar calibre 11-equipped Monaco watches pre-Biver was a whopping US$8100 – that’s 50% more than the current retail price. One consequence of the lower pricing of the new Monaco is downward pressure on the value of vintage Monaco chronographs, which have reached lofty heights (of about US$10,000) in recent years but have recently started to show weakness.