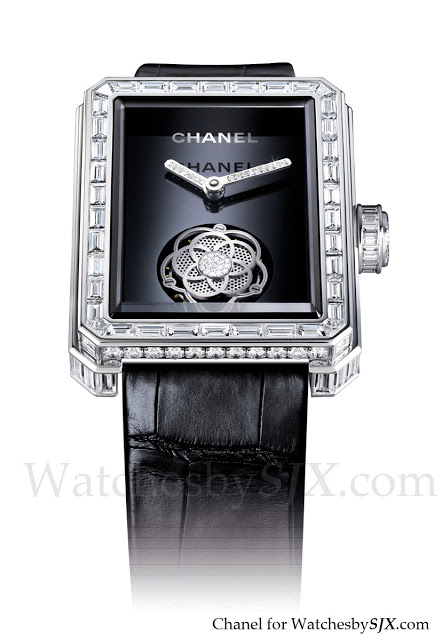 Unlike the just unveiled Harry Winston Histoire de Tourbillon 3, the new Chanel Première Flying Tourbillon “beats away discreetly and almost secretly” according to the press release. That’s because the tourbillon cage topped by a camelia flower that hides most of it. The rest of the watch is less discreet however, the case is white gold with 7.2 carats of diamonds and a glossy black ceramic dial. ﻿﻿﻿ ﻿

Though the movement is by Renaud & Papi, a simple flying tourbillon like this would be tough to sell to a collector, most of whom are male and have been inundated with tourbillons in the last five years. But this tourbillon is targeted squarely at ladies, which changes things.

The press release is much less discreet than the watch in that respect. I quote, “Chanel offers women the opportunity to enter into the world of high mechanical complications” and “this feminine incursion into the universe of watchmaking complexity”.  Because of the underdeveloped segment of ladies high complications, and that fact that it is a Chanel, I am sure it’ll sell pretty well. – SJX﻿ ﻿ 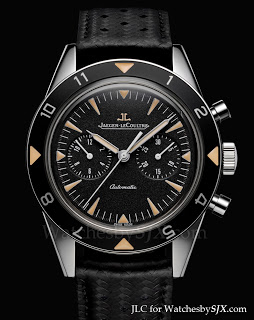 ﻿﻿In another of its numerous SIHH 2012 previews, Jaeger-LeCoultre has revealed the Deep Sea Vintage Chronograph containing the automatic 751G calibre. Visually it is very similar to last year’s Memovox Deep Sea Alarm, which sold nicely.

The 40.5 mm Deep Sea chronograph is not a remake of a vintage watch like the Deep Sea Alarm was, but rather a vintage looking watch. Neither is it a limited edition.

While it is attractive, I find the Deep Sea Chronograph uninspired. It is too soon after and too similar to the Deep Sea Alarm. You can have too much of a good thing.

JLC is good at many things, exceptional at some, but this just strikes me as an attempt to keep up the momentum after the Deep Sea Alarm.

But I recently tried on the Rado True Thinline automatic while picking up another watch and I was surprised. The True Thinline is a very slim watch, at only 7.8 mm high, available in white or black ceramic with a matching rubber strap.

It’s a simple watch and the movement inside is some ETA but it just works. And the fact that the True Thinline is priced reasonably with a retail of about US$2000 helps. And now Rado has just announced a True Thinline skeleton in white ceramic, to be lauched at Baselworld 2012. I’m looking forward to seeing this. 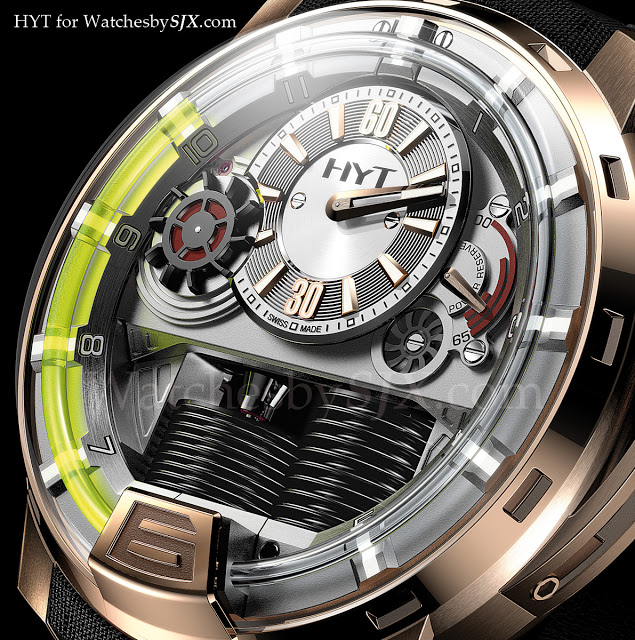 Here is a bit more information on the interesting hydro-mechanical HYT H1, seen here a few days ago. First the mechanics: the tube that displays the hours is actually filled with two immiscible liquids, one fluorescent green and the other clear. The meniscus separating the two is the hour indicator.

Once the green liquid hits six o’clock, it quickly flows backwards and starts again , like a retrograde hand. Pressure on each of the liquids is exerted by a pair of flexible alloy bellows at six o’clock. Essentially this is a mechanical watch with a sealed off liquid display for the hours. The H1 is manual wind with a power reserve of 65 hours. And the case is 48.8 mm in red gold or titanium.

This idea was realised by Jean-Francois Mojon of Chronode, AP alumnus Bruno Moutarlier and Helbling Technik, a design consultancy. Vincent Perriard is the CEO of HYT. Mr Perriard used to run Concord, which once unveiled the Quantum Gravity C1, which has a liquid display for the power reserve.

All in all an interesting idea, and if it works an achievement, but I wonder about its long term functioning. 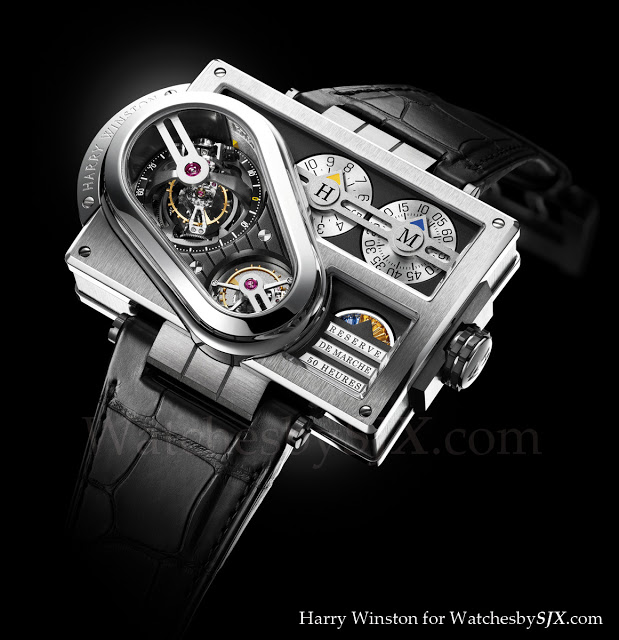 Here is a preview of the remarkable looking Histoire de Tourbillon 3 Harry Winston will present at Baselworld 2012 in March. It has one double axis tourbillon at nine o’clock with one cage rotating once every 40 seconds and the other every 120 seconds. The second tourbillon tourbillon at six o’clock makes one revolution every 36 seconds, which HW says is most effective in the vertical position. Both tourbillons are linked by a differential, similar to the Greubel Forsey Invention Piece 2.

Harry Winston doesn’t reveal who made the movement but it is surely Greubel Forsey, or more specifically Complitime, the sister company of Greubel Forsey that does movement development for other firms. Complitime also developed the earlier two Histoire de Tourbillon watches, which is Harry Winston’s series of exceptional tourbillons. On the other hand, Opus is independent watchmaking with avant garde time display, just like the Opus 11. The previous two Histoire de Tourbillon watches were already incredibly large, heavy and expensive, but this one takes the cake. The rectangular Histoire de Tourbillon 3 case, which is in white gold with a Zalium case band, is a mind boggling 65 mm by 45.9 mm. And one must remember the former CEO of Harry Winston who put it on this path of independent horology, Max Busser. Amongst Max’s creations at MB&F is the rectangular HM2. Interestingly the power reserve indicator on the bottom right of the watch uses sapphires and citrines to display the power reserve. As the watch winds down the sapphires go from dark to light coloured, and then the yellow citrines tell the owner the power reserve is nearly zero. A watch like this is the natural evolution of the tourbillon since it has been devalued by loose supply and easy marketing. So to command a premium price a brand has to offer something truly different. I lack the technical knowledge to pronounce definitively if this will keep better time than a regular escapement, but it certainly makes a statement. 20 of these will be made and I reckon the price will be quite a bit over that of the Histoire de Tourbillon 1 and 2, which were about $700,000 each. But no one else does exceptionally interesting, and pricey, tourbillons better than Greubel Forsey. – SJX