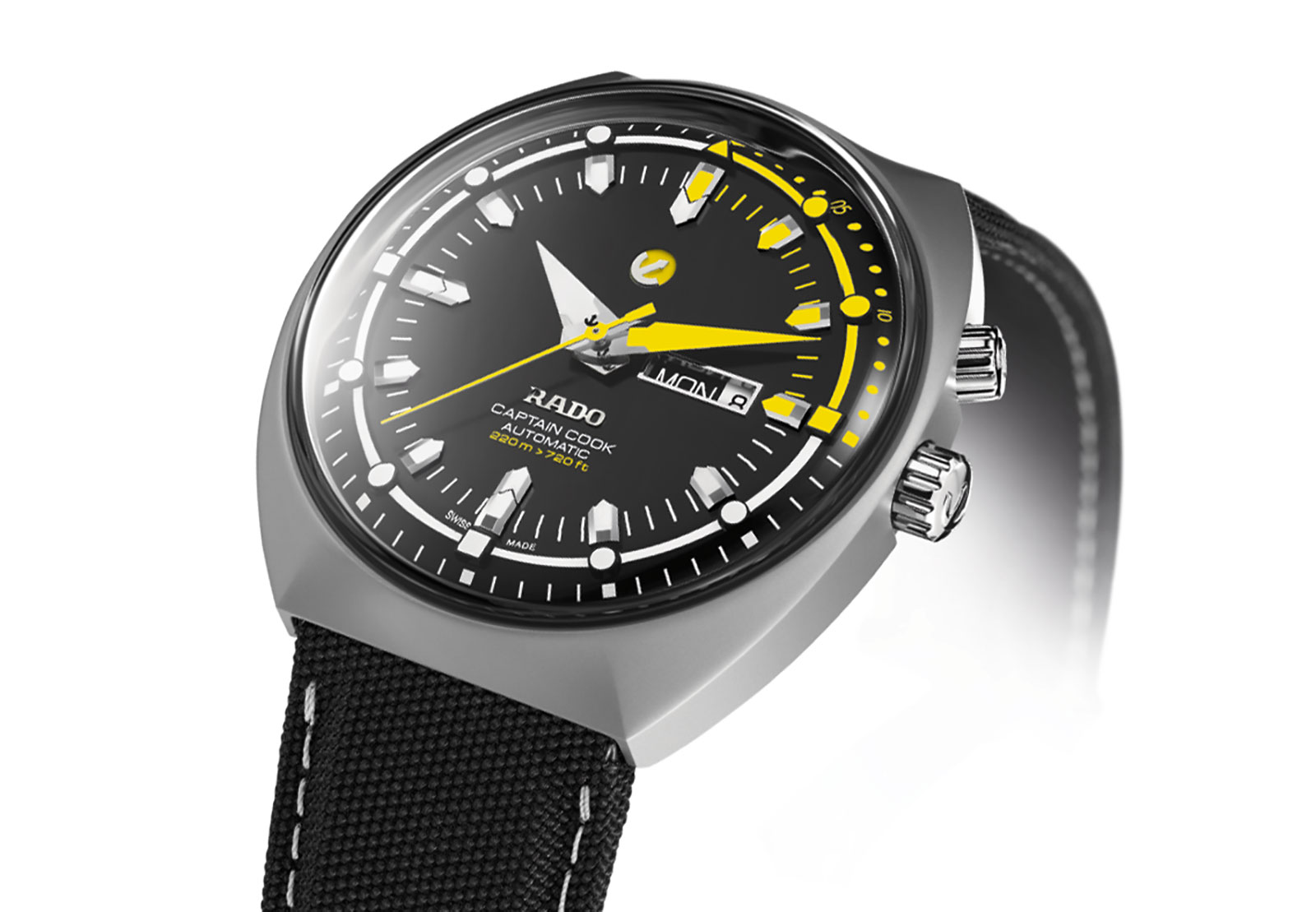 Unveiled at Baselworld last year, the Rado HyperChrome Captain Cook was just about the most surprising launch from the brand in years. While Rado is best known for its shiny, sleek and all-ceramic watches, the Captain Cook combined faithful 1960s styling with solid specs and a reasonable price tag. Now Rado has introduced the Tradition Captain Cook MKIII, which is based on another 1960s Captain Cook, this time the tonneau-case version.

While the HyperChrome Captain Cook was an out-and-out remake of the vintage original, the Tradition Captain Cook MKIII is expressly a reinterpretation. The watch has a case in lightweight titanium that makes it easy on the wrist despite the large dimensions – 46.8mm wide, 48.3mm long and 13.9mm high. The fit is also helped by the short, almost non-existent lugs that allow the watch to wear like a smaller timepiece.

And unlike the HyperChrome which had a 100m depth rating and no screw-down crown, the Tradition Captain Cook is a more serious-minded diver’s watch, equipped with a screw-down crown and 220m water resistance. Inspired by the domed PlexiGlas on the original, the watch is fitted with a “box-type” sapphire crystal. Like many dive watches of the 1960s and 1970s, it features an internal, uni-directional bezel for measuring elapsed time that is operated via the crown at two o’clock. The inner bezel has fully luminous markings, as well as its first 15 minutes in bright yellow to time decompression stops. The dial has been entirely redesigned with large, sword-shaped hands and applied indices, a distinct departure from the chunky, oblong hands and markers found on the original. The minute hand, just as crucial in a dive watch, is also in yellow. The Tradition Captain Cook MKIII is powered by the ETA C07.621, the day-date version of a calibre used by several Swatch Group brands; Mido dubs it the Calibre 80 and Tissot, the Powermatic 80. It is essentially an ETA 2836 with an extended, 80-hour power reserve thanks to a redesigned mainspring barrel, low friction escapement and 3Hz balance. The escapement parts are made of ARCAP, a copper, nickel and zinc alloy that is extremely anti-magnetic, as well as low friction. Modelled on a 1960s original, the Seastrong Diver Heritage is an appealing, historically faithful "Super Compressor" dive watch for well under US$2000.